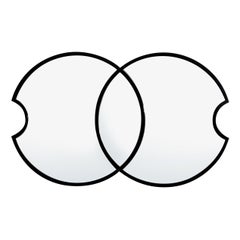 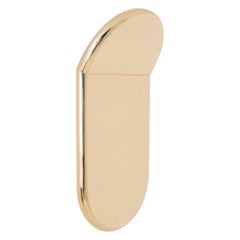 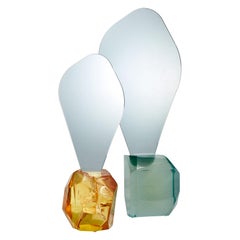 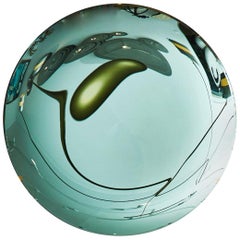 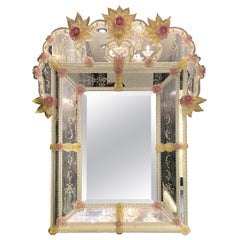 Planetaria Double Mirror, Powder Coated Steel and Mirrored Glass, by Lara Bohinc
By Lara Bohinc
Located in London, GB
New addition to Planetaria collection, the mirror was created to accompany the Panetaria wall lights, however it can stand by itself. This oblong mirror is constructed from two inter...
Category

One of a Kind Woven Cotton and Ceramic Oval Mirror in White
By Karen Gayle Tinney
Located in Long Beach, CA
One of a kind mirror #714 by Karen Gayle Tinney Decorative mirror with hand formed stoneware frame glazed in satin white. The frame exterior is woven in white cotton with white co...
Category

Magnificent Italian Regency Style Mirror with Figural Cameo
Located in Hopewell, NJ
Magnificent brass large curved mirror having figural cameoesque central decoration and fabulous griffins on each side. The mirror is sold separately, but matches a gorgeous marble to...
Category

Ceramics Wallstories 02 Mirror
By Kiki van Eijk, Kiki & Joost
Located in Eindhoven, NL
These wall-objects made in ceramics are inspired by Kiki's cardboard collages. I’m playfully building with clay pieces. I cut the clay by hand and I glaze it with a brush, adding a m...
Category

A. Cepa Wall Mirror Large in Hand-Patinated Bronze
By Konekt
Located in Philadelphia, PA
The sculptural A.Cepa mirror in hand-patina bronze is cast in bronze at a fine art foundry in Pennsylvania, and skillfully patinated by hand. Undulating and irregular in form, the A....
Category

Italian Hand Carved and Gilded with antique glass mirror
Located in Scandicci, Florence
Tendrils of hand carved convolvulus flowers twine around the faux bamboo supports of this elegant mirror. Each flower, leaf, and bamboo section is individually carved and then layere...
Category

French Art Deco Walnut Frame Beveled Mirror, 1930s
Located in Austin, TX
A French Art Deco period Mirror, circa 1930s with a walnut frame and a beveled mirrored glass. The triple edge frame has an arched top, some floral designs and scrolls. The mirror is...
Category

A. Cepa Wall Mirror Large in Polished Bronze
By Konekt
Located in Philadelphia, PA
The sculptural A.Cepa Mirror in Polished Bronze is cast in bronze at a fine art foundry in Pennsylvania, and skillfully polished by hand. Undulating and irregular in form, the A. Cep...
Category

Black and Speckled WG.C1.A Hand-Crafted Wall Mirror
By Mirrors Collective
Located in Brooklyn, NY
Mirrors are made with ultra clear, low-iron mirror Backing is made from FSC Certified recycled paper and natural resin Mirror tints hand-crafted in Italy Dimension: 36 x 32 in We...
Category

Decorative White Twig Mirror
Located in New York, NY
Decorative white twig mirror. The frame of the mirror is hardwood and the twigs are made of a resin material with a white lacquered finish.
Category

Magnificent Ceramic Mirror by Alain Girel for Hermes, Commissioned in 1994

Planetaria Single Mirror, Oxydised Brush Brass and Mirrored Glass by Lara Bohinc
By Lara Bohinc
Located in London, GB
New addition to Planetaria collection, this round mirror has two smaller round cut outs on the sides. The mirror was created to accompany the Planetaria wall lights, however it can s...
Category

21th Century Oval La Jolie Aged Bronze Mirror Polished Hammered Brass
Located in RIO TINTO, PT
La Jolie mirror is part of the new collection, future Classics. Since ever, the notion of joy in life inspired all the philosophers, artists, and other thinkers. One of the most pro...
Category

Fantastic Murano Glass Mirror
Located in Bois-Colombes, FR
Wall mirror with Murano glass pieces and brass frame. Can be made on order with other glass color on measurement Price for one. Possibility of a second one.
Category

One of a Kind Round Woven Cotton and Ceramic Mirror in White/Black
By Karen Gayle Tinney
Located in Long Beach, CA
One of a kind mirror #713 by Karen Gayle Tinney. Decorative mirror with hand formed stoneware frame glazed in satin black. The frame exterior is woven in black and white cotton, u...
Category