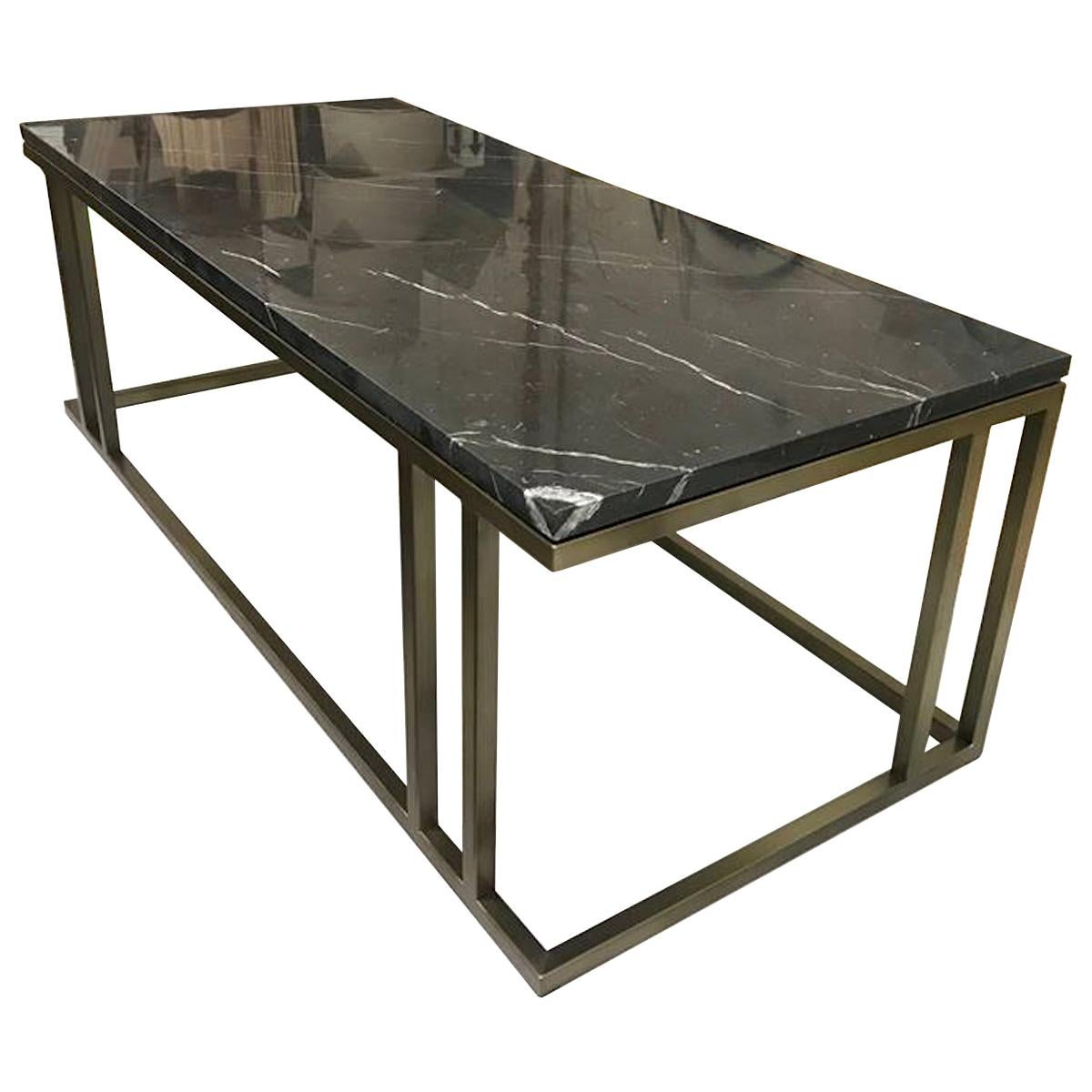 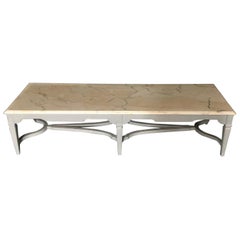 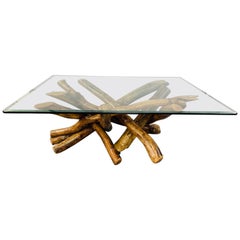 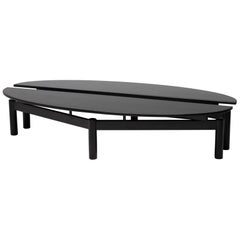 Versatile Italian Dry Bar Side Table on Wheels with Storage
Located in Waalwijk, NL
Side table with dry bar, teak, brass, steel, Italy, 1950s. This delicate round cocktail table has several interesting features. To begin, it has a bright red middle that can be li...
Category

Versatile Italian Dry Bar Side Table on Wheels with Storage

Block Side Table in Marble by Anna Karlin, Made in Italy
By Anna Karlin
Located in Milan, IT
A table dressed for daytime London born but a long time resident of New York, Anna Karlin is ready for a new adventure with this daytime version of her Block side table. A discovery ...
Category

Block Side Table in Marble by Anna Karlin, Made in Italy

Overlapping Tricolumn Coffee Table by MSJ Furniture Studio
Located in Vancouver, BC
Our overlapping Tricolumn coffee tables looks great in a contemporary interior. The tables whitened finish allows you to see the polished wood grain through the finish. This item can...
Category

1970s Neoclassical Style Italian Brass, Steel, and Glass Coffee Table
Located in Kennesaw, GA
This is a modern interpretation of neoclassical styling with a sleek blend of brushed steel and brass and glass. The four supports are brass gazelles. The gazelles are connected by b...
Category

Art Deco Bookmatched Walnut and Mahogany Cocktail Table
Located in New York, NY
This stunning Art Deco skyscraper style occasional table was realized in the United States, circa 1935, at the height of Art Deco. It features a top consisting of walnut with a bookm...
Category

Bespoke Art Deco Inspired Elio Coffee Table Brass Tint Structure & Black Marble
By Casa Botelho
Located in London, GB
Sat in the center of your living space, the coffee table is a significant piece in a home’s lifestyle. An anchor within the rooms design concept and an aesthetic focal point, it’s no...
Category

Gianfranco Frattini Round Coffee Table in Walnut and Glass

Arne Vodder Attributed Teak Side Table with Quatrefoil Shape, Denmark, 1960s
By Arne Vodder, Bovirke
Located in The Hague, NL
This very rare side table was produced in Denmark in the early 1960s. The design is attributed to Arne Vodder, produced by the manufacturer Bovirke. The quatrefoil shape of the top, ...
Category

Large Round White Column Coffee Table by MSJ Furniture Studio
Located in Vancouver, BC
Our low sitting column coffee table looks great in a contemporary interior. The table tops whitened finish allows you to see the polished wood grain through the finish. The column le...
Category

Wrought Iron with Marble Coffee Table, France, 1950s
By Raymond Subes
Located in Antwerp, BE
Wrought iron with marble coffee table from the 1950s. This great coffee table has a curled gilded wrought iron base with a polished black vained marble top or tray. Around the marbl...
Category

Coffee Table with Base in Lucite with Chrome Corners

Mid-Century Green Octagon Onyx Coffee Table with Round Off-White Wood Base, 1970
Located in Berlin, DE
This beautiful midcentury coffee table was made in the 1970s in Germany. The top has an octagon shape and is made out of green onyx. The round wood base is re-painted in an off whit...
Category

Glam Side Table with Carrera Marble Top and Grey Lacquered Wood Base
Located in Hopewell, NJ
This decorative and versatile round side table or coffee table is handcrafted using a stunning Portuguese Carrara marble. This selective thick marble is in excellent condition and ha...
Category

Travertine Triangle Duo Coffee Table for Up&Up, Italy, circa 1970
By Up & Up
Located in London, GB
Up&Up hit the scene in 1969. At the foot of the Apuan alps where Michelangelo cut his stone, Up&Up have invited incredible designers - Sergio Asti, Ettore Sottsass, Matteo Thun - to ...
Category

Melting Nesting Coffee Tables in Shagreen, Shell and Brass by R & Y Augousti
By R & Y Augousti
Located in New York, NY
The Melting Nesting round coffee tables are sold as a set of 2; the large and medium size are inlaid in cream shagreen and have a bronze-patina brass framed with an irregular surface...
Category

Coffee Table Solco in Pleated Oak Steel Mirror by Constance Guisset
By Constance Guisset
Located in MONTROZIER, FR
Solco is a coffee table that hides its game well. The purity of the object hides a sculptural surprise. Compounded of two tops, this solid oak table reveals its hidden side thanks ...
Category

1970s Rattan and Bamboo Coffee Table by McGuire
By McGuire
Located in Hudson, NY
A beautiful vintage 1970s coffee table by McGuire of San Francisco, with a base of rattan and bamboo, with leather lacing, in an intricate double square design, supporting a square g...
Category

Art Deco Rosewood Coffee Table by De Coene, 1930s
By Jules Leleu, De Coene
Located in Belgium, BE
A beautiful Art Deco coffee table by De Coene in rosewood. The table is inside illuminated with four light points, the glass plate is sandblasted. The design of this table is simil...
Category

Center Table, with Lazy Susan Rotating Brazilian Agate on Black Tempered Glass
By Pietra Gallery
Located in Polanco, CDMX
This center table is an original design featuring a one of a kind "Lazy Susan" Brazilian Agate (rotating agate) Agates are formed in rounded nodules, which are sliced open to brin...
Category

Thonet Bentwood Coffee Table with Hammered Brass Base, Austria, circa 1915
By Thonet
Located in Lichtenberg, AT
Remarkable Art Nouveau Thonet bentwood coffee table from the famous company of Thonet Vienna/ Austria from the early 20th century, circa 1915. The round tabletop sits on a column whi...
Category

Thonet Bentwood Coffee Table with Hammered Brass Base, Austria, circa 1915

Opiary Concrete Coffee Table
By Robert Remer
Located in Brooklyn, NY
Opiary is a Brooklyn-based biophilic design and production studio. We integrate nature in each of our designs, incorporating live greenery and organic shapes into bespoke furniture, ...
Category

Paul Evans Cityscape Coffee Table
By Paul Evans
Located in Saint Petersburg, FL
This table base is being sold without the glass top unless otherwise requested. Paul Evans was an American born furniture designer, sculptor, and artist, who is famous for his con...
Category

Table No. 2 Square by JM Szymanski

Oversized Buckeye Burl Coffee Table, in Stock
By Möbius Objects
Located in Calgary, CA
A huge cross-cut slab of Buckeye Burl set atop a blackened ash frame with oversized turned legs. The slab while unadulterated in form has been meticuloulsy sculpted. The table as...
Category