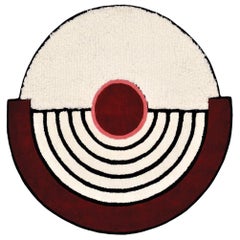 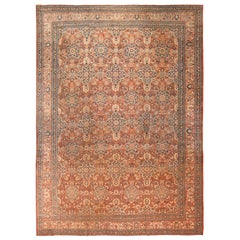 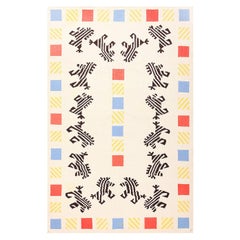 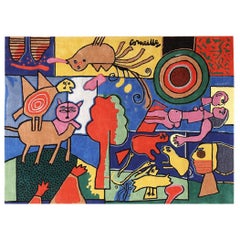 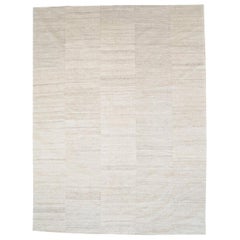 Center Court by Moniomi, Hand-Tufted Wool Beige Circle Rug
Located in Miami, FL
The titular circular motif in the Center Court Tapestry rug is drawn from the center circle of the ancient basketball court. This rug is hand-tufted in India, made with wool, silk, a...
Category

Composition IV - Green Beige Modern Hand Knotted Wool Silk Rug
By Tapis Rouge Atelier
Located in Milano, IT
Harmony of Color and Geometry A complex geometric abstraction made up of layering shapes. Fragmentation of figures with color enhances the dynamics, while the central focus is made ...
Category

20th Century Blue and White Berber Rug, ca 1980
Located in Firenze, IT
Berber carpet, Morocco, particularly rare for its graphic composition and colour. The thick wool is shiny and dyed with a cobalt blue mixes with shades of natural white wool to for...
Category

Vintage Suzani from Samarkand Uzbekistan, 1960s
Located in Istanbul, TR
The design and work on this orange Suzani is superior to the most same period pieces. It has no lining and if one wants to use it on a bed or so it could use one and it can be done ...
Category

Schumacher Ratio Area Rug in Hand-Tufted Wool Silk by Patterson Flynn Martin
By Schumacher
Located in New York, NY
The rich compositions in this eye-catching collection owe their unique play of shapes and unexpected color combinations to the influence of the Memphis Group design movement. Made of...
Category

CC-Tapis Envolee Rug by Cristina Celestino
By cc-tapis, Cristina Celestino
Located in New York, NY
Hand knotted in the cc-tapis atelier in Kathmandu, Nepal. The rug is made with a cotton weave a Himalayan wool and linen pile coming from the areas surrounding the atelier. 89.000 in...
Category

Riff Rug from Souda, Customizable, Medium, Natural Wool, Multicolored 01
By Luft Tanaka, Souda
Located in Brooklyn, NY
The Riff Rug is designed by Luft Tanaka for Souda. This listing is for a 8x10 rug in the colors shown. We offer a number of different colors. We can mix colors akin to the rug photo...
Category

Composition X - Multi-Color Bright Hand Knotted Wool Silk Rug
By Tapis Rouge Atelier
Located in Milano, IT
Natural Shapes in Rug Design The rug design is a modern abstraction based on spots of local color. Irregularly shaped elements are superimposed on each other, concentrating in the c...
Category