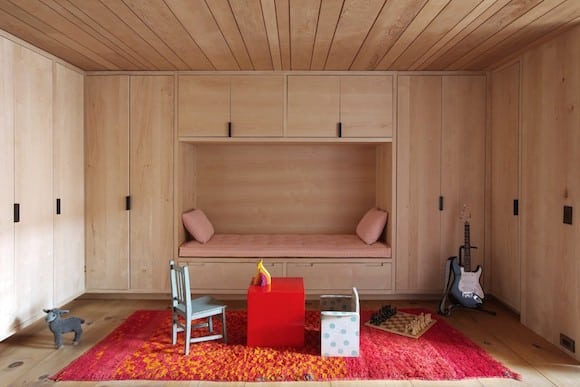 This wood-wrapped area of a downtown New York loft by Sachs Lindores sees vintage French and American chairs atop a Moroccan rug. Photo by Inez and Vinoodh

The West’s current infatuation with Moroccan tribal rugs stretches to the mid-20th century, when designers embraced bold geometric patterns and even bolder palettes as counterpoints to form-follows-function interiors. Alvar Aalto, Frank Lloyd Wright and Le Corbusier were among the designers who used these rustic, natural rugs to offset austere interiors. “They even have one at Fallingwater,” Wright’s early modernist masterpiece, says designer and dealer Madeline Weinrib, who travels to far-flung locations to deal directly with the makers of these textile gems.

With bohemian, global and eco styles on the rise, there’s increased demand for Moroccan tribal rugs, and prices for well-crafted, vintage versions can easily break into the six figures. However, Murat Kupcu, an antique-rug specialist and owner of Double Knot, has a word of caution: “With the popularity and seemingly endless supply of Moroccan rugs today, it is important to distinguish between the authentic, made-for-home Berber rugs and those made for the market, or for export.”

Ironically, it’s the rugs that were produced most economically and without the market in mind that carry the highest price tags. Rug experts and consumers agree: We are most moved by textiles that were developed at the whim of the weaver, whose only instruction was her ancestral traditions.

Traditionally, Moroccan tribal weavings were made exclusively by women and solely for personal use. Dense pile rugs served not only as floor coverings but as mattresses, seating and even blankets in the winter months. Each woman weaves the story of her life into the rugs. They are filled with symbolism and vary greatly depending on the locale where they were woven. 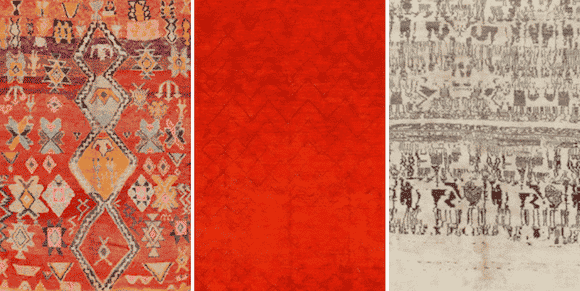 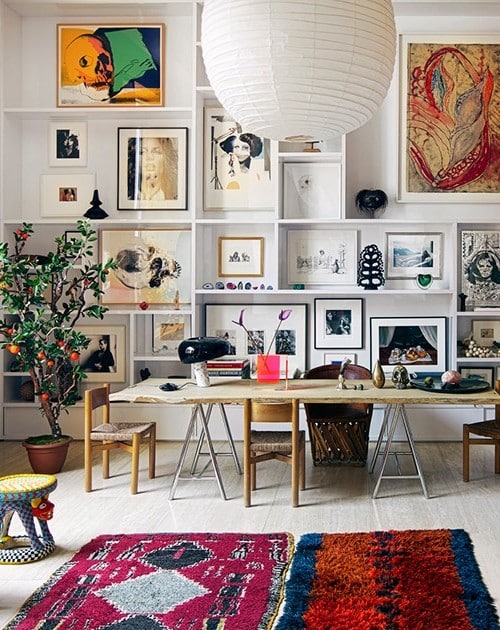 Art and design by the likes of Louise Bourgeois, Nan Goldin, Charlotte Perriand and Philippe Starck is anchored by a pair of Moroccan rugs in this New York City loft by Sachs Lindores. Photo by Inez and Vinoodh 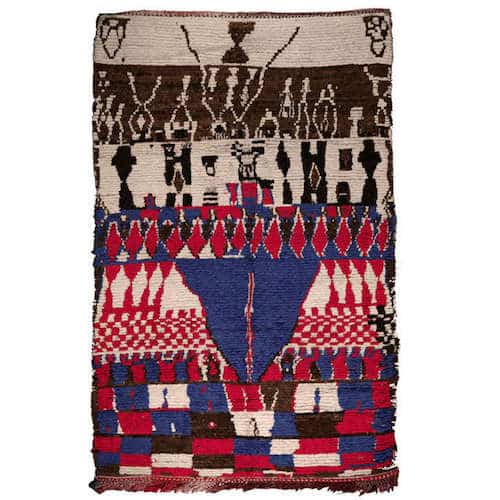 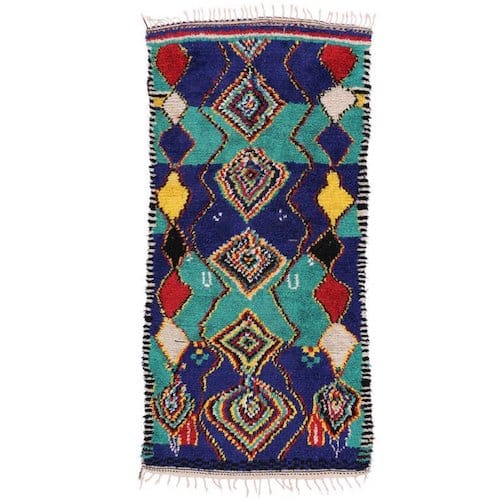 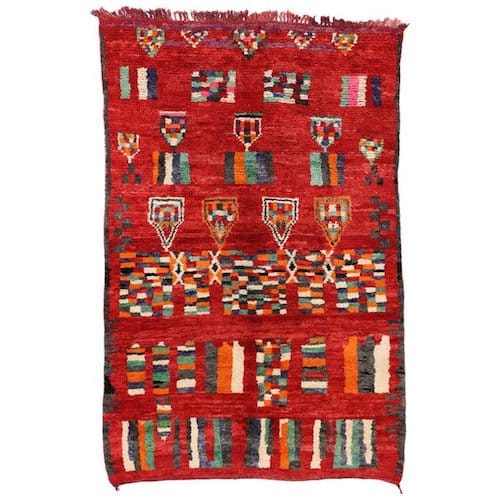 Bold geometric designs are characteristic of many rural regions of Morocco, from the Atlas Mountains to the Sahara. But it’s the Azilal region, extending north of the High Atlas to the southern foothills of the Middle Atlas, that provides many of the most-sought-after, heavily decorated carpets. “Lacking a written language, ancient Berber weavers incorporated ancestral myths into their textiles using archaic images and symbols,” says Ali Esmaili, propietor of Esmaili Rugs.

“Azilal rugs are single knotted, which allows for very fine work and artistic design,” says Soukie Modern cofounder Kenya Knight, whose business partner is of Berber descent. This probably explains why the patterns are so intricate. Interestingly, neutral-toned versions are more traditionally tribal than the popular rugs with a red ground, which are actually newer rural versions of urban Rabat carpets, whose origins are Arab. 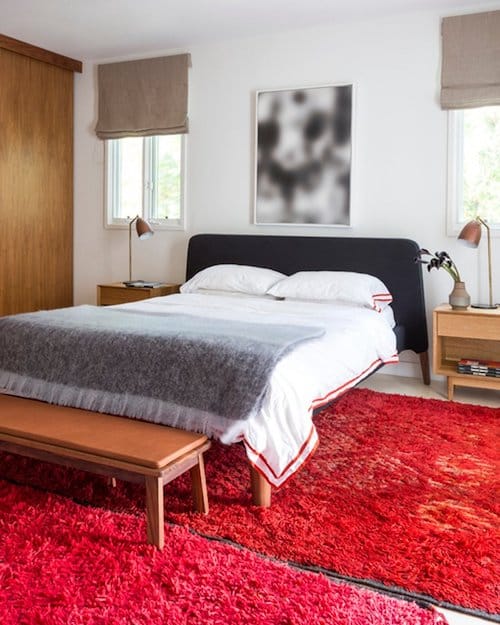 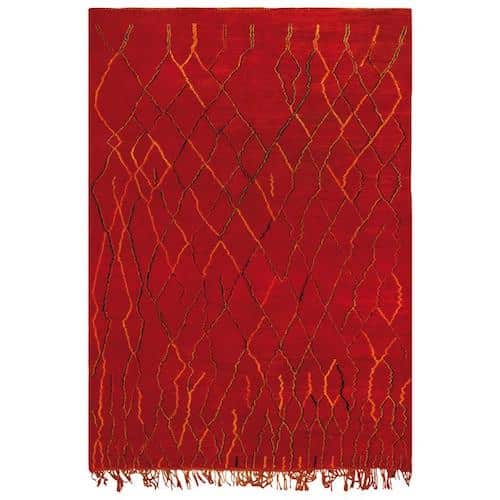 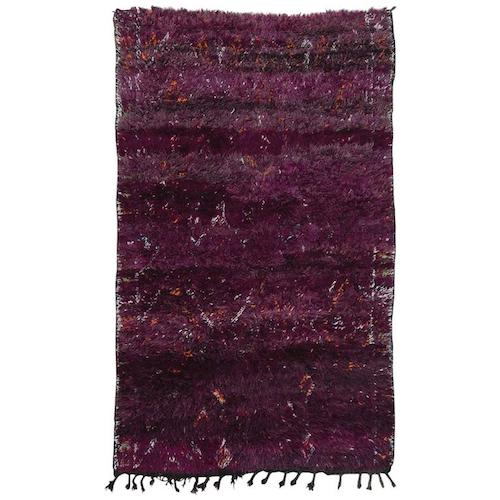 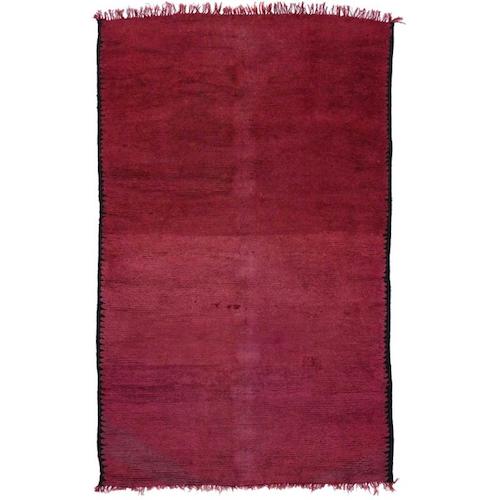 Moroccan rugs are not all about pattern. In fact, some of the most striking examples are nearly monochrome. But what these rugs lack in complexity, they make up for in brilliant color and subtle variation. Traditional dyes are sourced from local vegetation or minerals. However, some, like Tyrian purple and the rich red from cochineal, come from shells. Beni Mguild are particularly known for utilizing indigo to create deep shades of blue and purple.

Although not rich with symbolic imagery, the colors themselves contain their own form of symbolism. As Esmaili enumerates, “In Berber culture, the color red symbolizes strength and protection, blue symbolizes wisdom, yellow represents eternity and green stands for peace.” 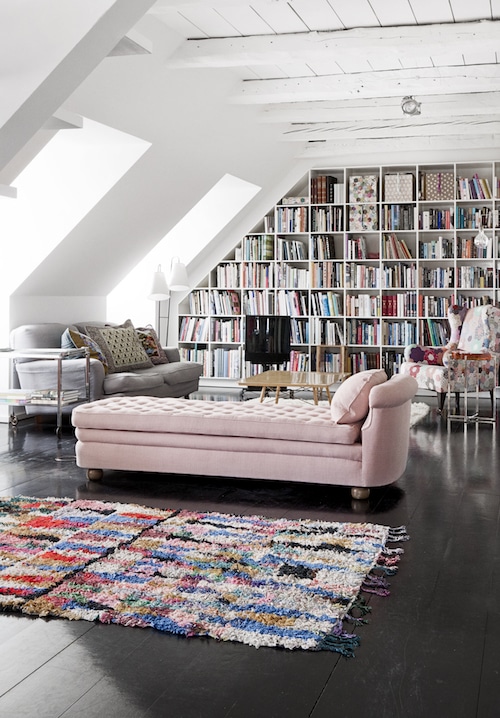 To soften the austerity of a Copenhagen loft, Tina Seidenfaden Busck brought in plush mid-century furnishings and a vintage boucherouite rag rug. Photo by Heidi Lerkenfeldt 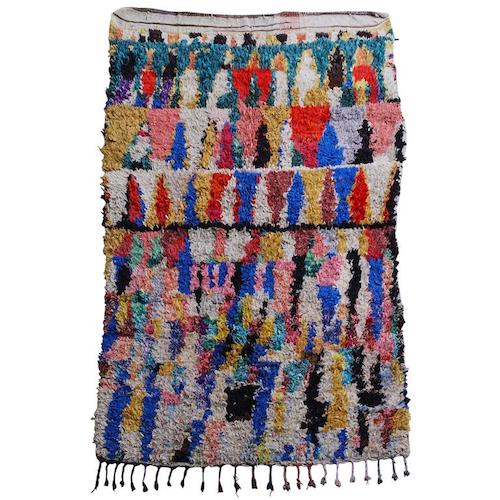 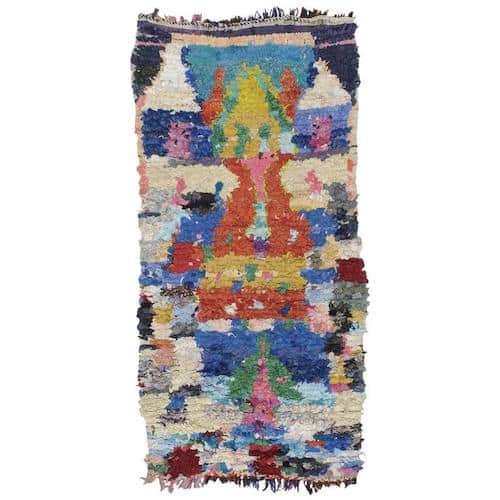 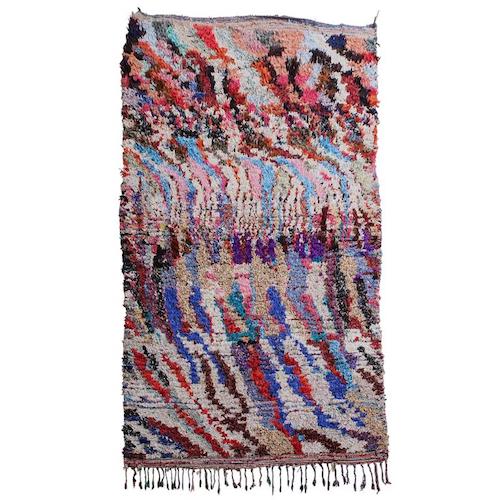 Who would guess such a fun-looking carpet was the result of serious social and economic changes? Boucherouite (from the Arabic bu sherwit, meaning “a piece torn from pre-used clothing”) emerged along with the transition from nomadic herding to modern forms of employment, which has made wool harder to come by. Initiated in the Central Plains by the Beni Mellal and Boujad, eventually this practice gained acceptance by even the most remote tribes in the Middle and High Atlas regions (notably, the Ourika).

Boucherouite rugs are distinct in that there is little distinction between them. They are often mislabeled as Boujad in the marketplace because it’s nearly impossible to discern the tribal variations between them.

“For me, the rugs are almost like paintings on the floor, so I have a similar approach as if I was hanging or installing paintings on the wall,” says Tina Seidenfaden Busck, designer and founder of the Apartment in Copenhagen. This is evident in the above image, where a particularly colorful Boucherouite rug echoes the geometry and color variations of the contents of Seidenfaden Busck’s built-in bookshelves. 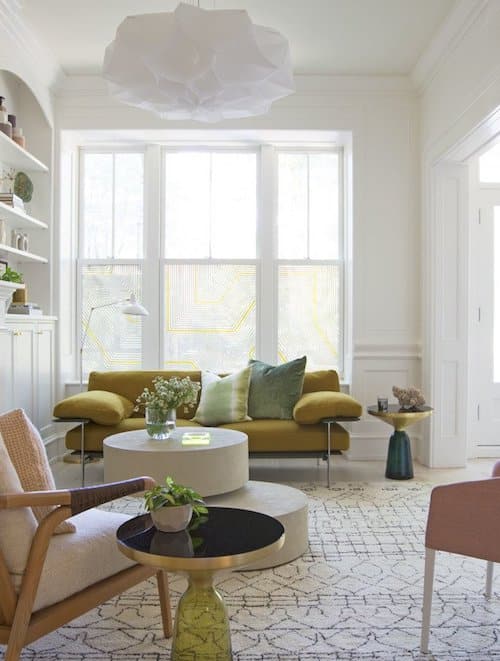 The delicate pattern of a hand-knotted Moroccan wool rug grounds the living room of a Lincoln Park residence by Summer Thornton. Photo by Josh Thornton 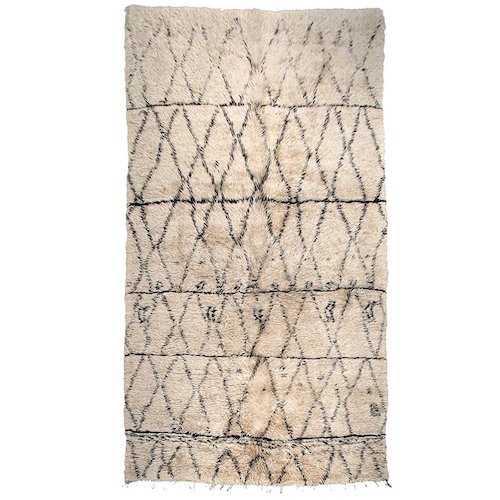 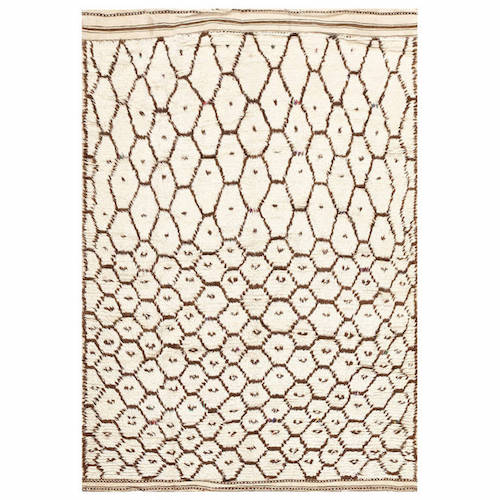 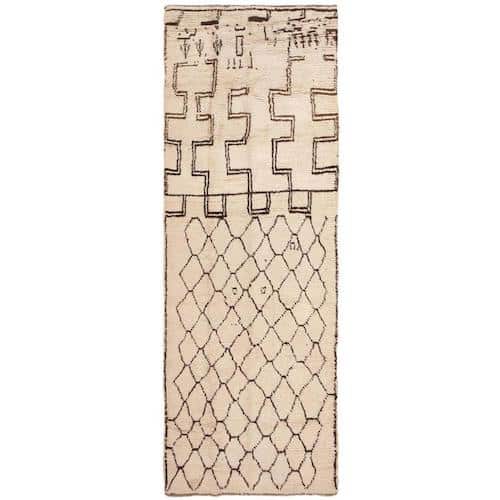 The neutral tones and elegant, stripped-down geometry of Beni Ourain rugs makes them one of the most loved by modern interiors enthusiasts. There are endless contemporary spinoffs of the style made known by the Beni Ourain, a network of nearly two-dozen individual tribes in the Middle Atlas region. “Woven from undyed, natural wool, the field is largely cream and the decoration is picked out in delicate lines of a henna-like brown,” F.J. Hakimian says of the stylish textiles, whose darker-toned lines are traditionally woven with undyed wool from black sheep.

Although there is nothing in-your-face about Beni Ourains, “you see little details that give the pieces depth, soul and character you can’t find in mass-produced machined carpets,” designer Summer Thornton says. Subtle variations in line thickness, asymmetry of the geometric designs and color imperfections are exactly the details that endear these rugs to designers like Thornton. 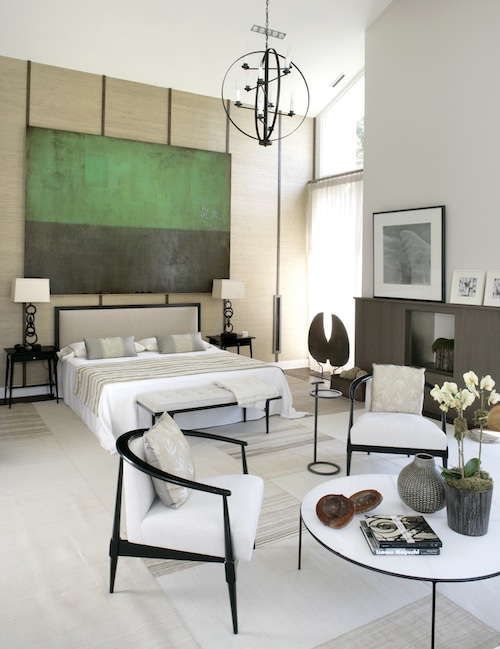 A wall-to-wall carpet, stitched together from smaller vintage Moroccan kilims, covers the master bedroom in this Groves & Co. design for a Hamptons Cottage and Gardens Idea House. Photo courtesy of Groves & Co. 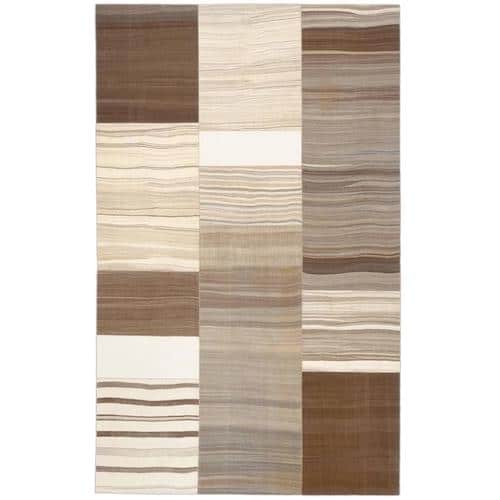 Composition carpet made of 1940s kilims. Offered by F.J. Hakimian 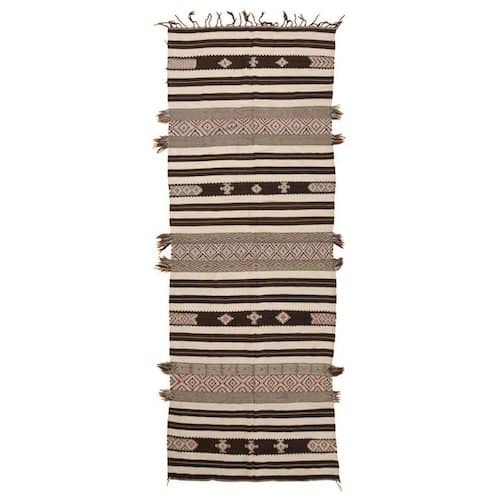 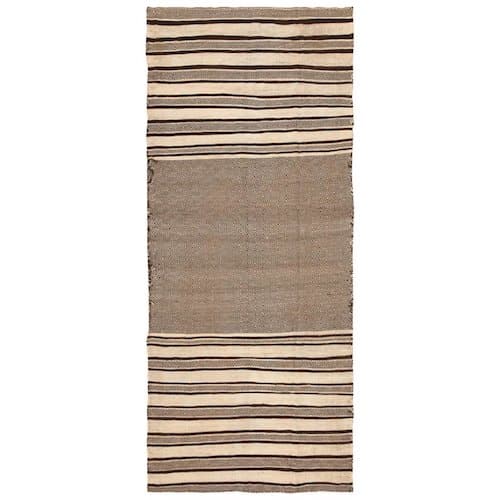 Kilim, a word of Turkish origin, denotes a flatwoven and pileless textile, whose many variations share a common heritage and are practiced all across Turkey, the Balkans and throughout the Arab world. Because the resulting weave is lightweight, these rugs are well adapted for use in the hot summer months and are happily embraced by Moroccan tribal weavers.

As Hakimian points out, “Even though vintage Moroccan kilims tend to be limited in size, their simplified geometry allows us to join them together to create dimensions befitting to modern interiors.” This is evident in the above image of a Hamptons Cottage and Gardens Idea House by Groves & Co., which incorporates an oversized carpet assembled from smaller vintage kilims. 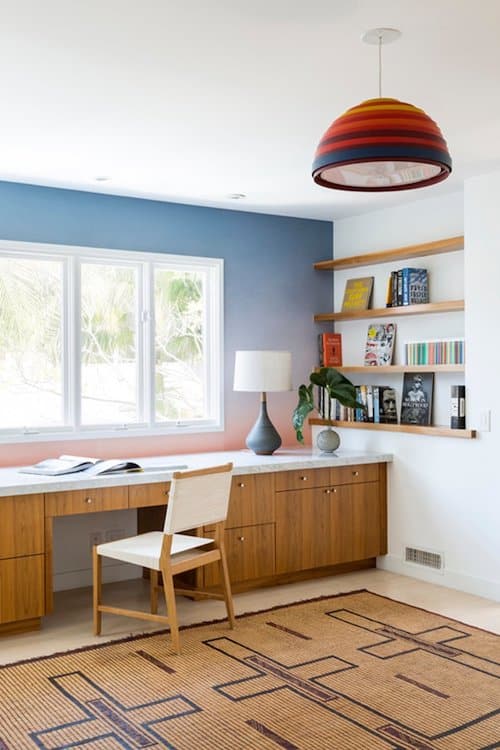 The office of this Venice, California, beach house by Ashe + Leandro incorporates a vintage Tuareg reed and leather mat to stunning effect. Photo by Fran Parente 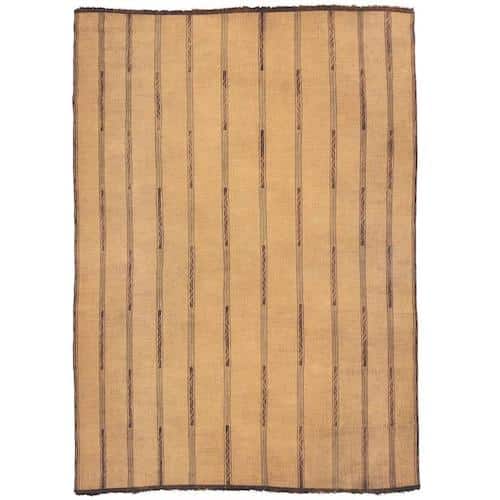 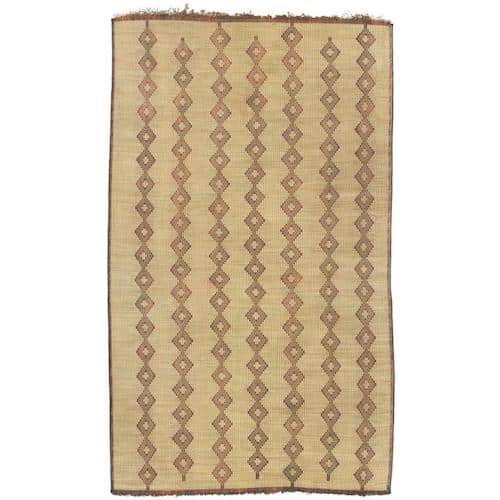 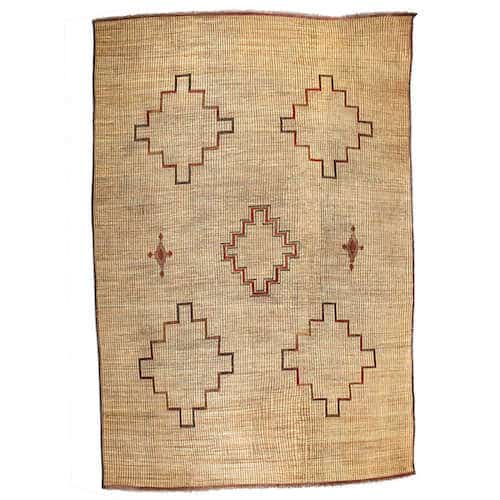 In many ways, Tuareg mats are symbols of a dying way of life. Made primarily in the early 20th century, when endless caravans migrated through North Africa, the mats were designed to support a now-disappearing nomadic way of life. Before moving to a new location, the Tuareg people rolled up their homes, which were built, covered and furnished with the mats made out of palm and reeds and stitched with designs in camel or goat leather.

The addition of a Tuareg mat in a modern home, like the above beach house in Venice, California, by Ashe + Leandro, channels the tribe’s rugged, nomadic vibe.

Considering a Moroccan rug? Things to keep in mind: