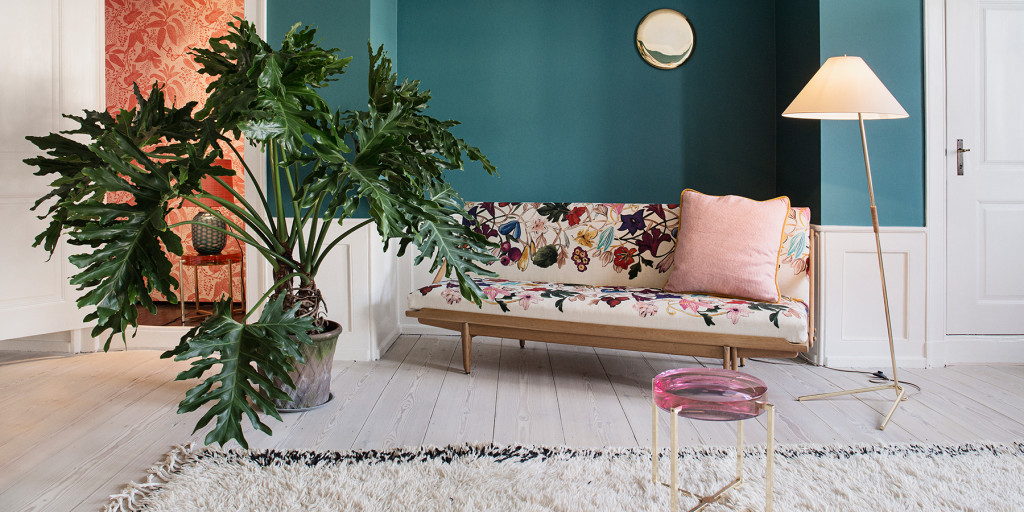 With its surprising mix of mid-century and select contemporary pieces, the Apartment, owned by decorator and dealer Tina Seidenfaden Busck, is the ultimate furniture showroom. 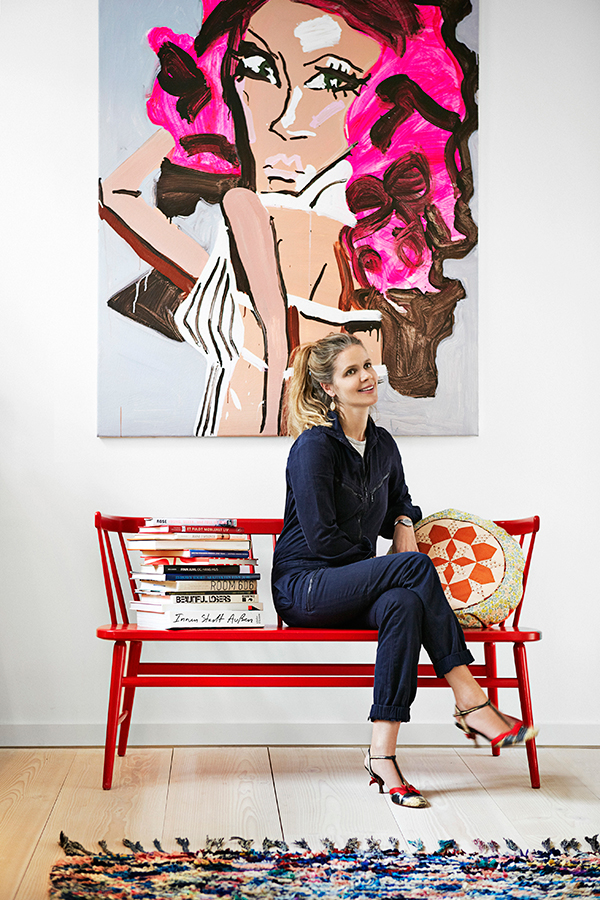 March 14, 2016Tina Seidenfaden Busck, the force behind Copenhagen design gallery the Apartment, sits on an Ercol bench underneath a Katherine Bernhardt artwork (photo by Stine Heilmann). Top: An Apartment vignette shows off a reupholstered Poul Volther 1950s daybed, a J.T. Kalmar Hase floor lamp and a McCollin Bryan Lens table. All photos by Heidi Lerkenfeldt for the Apartment, unless otherwise noted

Purists be warned: There is no place for you at the table of Tina Seidenfaden Busck. Despite growing up in the epicenter of sleek, simple, Scandinavian design, the Danish interior designer, art adviser and proprietor of Copenhagen showroom the Apartment has built her kingdom around a few tastes and tenets that fly in the face of polished perfection.

“People are afraid of overdoing it — of clashing, of chaos — but I don’t like when things match!” says Busck, framed by the gallery’s brightly painted walls as she fills a pitcher of water. “I like the opposite. I love textiles and pattern and color. I love when you can see the craftsmanship in a furniture piece,” she continues. “When I put different things together, I know immediately if it works or if it doesn’t.”

Situated in Copenhagen’s charming Christianshavn district, the light-flooded and aptly Apartment occupies an entire floor of a restored 18th-century residential building, where Busck, her husband and three children live one level up. Providing views of the canal through its ample windows, it is a showroom unlike any other, a network of residential spaces — living room, office, kitchen, bathroom — decorated exactly as they would be in someone’s house. Rather than offering visitors the chance to impersonally browse, the Apartment is a place to sit, to have coffee — in short, to experience what it would be like to live with the objects on sale.

“When I started as an art and design adviser, I was lacking a place to show my clients how the pieces would work in a domestic context,” Busck says. “I sent them to galleries in Milan or London, and I just felt like something was missing. So the idea came to me to have a place where people could actually see how these objects feel in a living residential space, to help them imagine it in their home.” 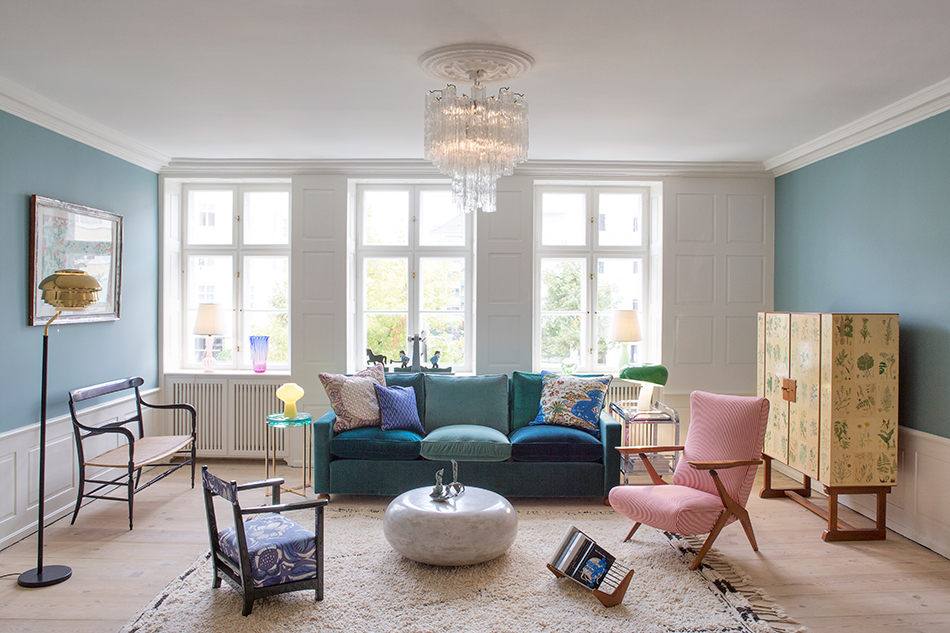 A model living room in the Apartment juxtaposes a 3031 sofa and a 1950s Flora cabinet, both by Josef Frank for Svensk Tenn; a reupholstered 1950s Italian armchair; a low Azucena armchair; and a Coffee Bean coffee table and resin Lens table by McCollin Bryan. Also seen are a 1950s Chiavari bench; a 1950s A808 floor lamp by Alvar Aalto; a green Snoopy table lamp by Achille and Pier Giacomo Castiglioni for Flos; a 1940s mirrored French trolley; a vintage Beni Ourain rug; and a 1960s Murano glass chandelier. 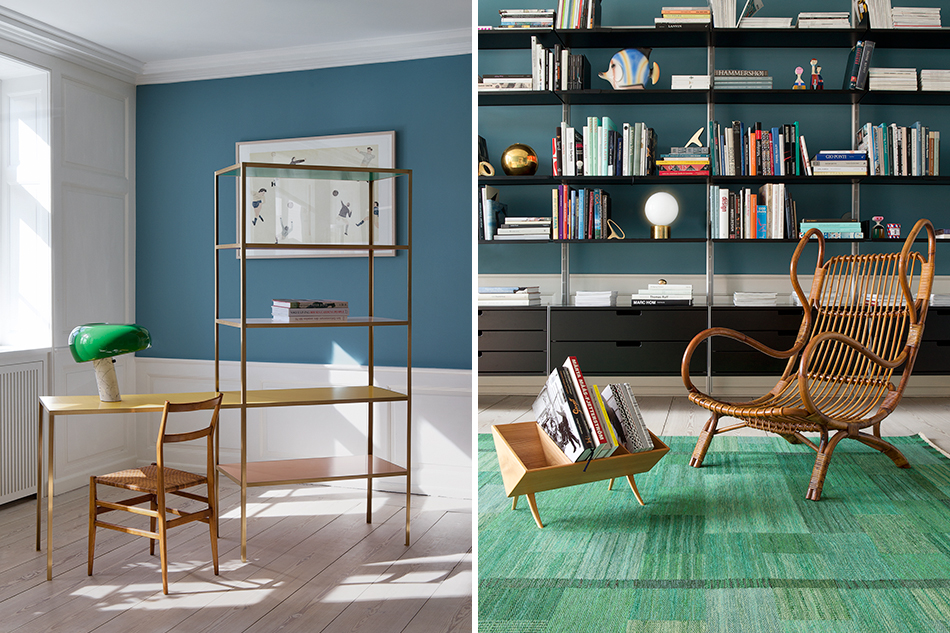 Left: A table-rack combo by Belgian duo Muller Van Severen keeps company with a Snoopy table lamp, a 1970s Leggera chair by Giò Ponti and a lithograph by Jockum Nordström. Right: Ponti’s BP 16 1960s armchair and a vintage Bruno Mathsson Book Crib rest on a flat-weave rug by Märta Måås-Fjetterström. In the background, a 606 shelving unit by Dieter Rams for Vitsœ holds a Tip of the Tongue table lamp by Michael Anastassiades amid vintage knickknacks and books. 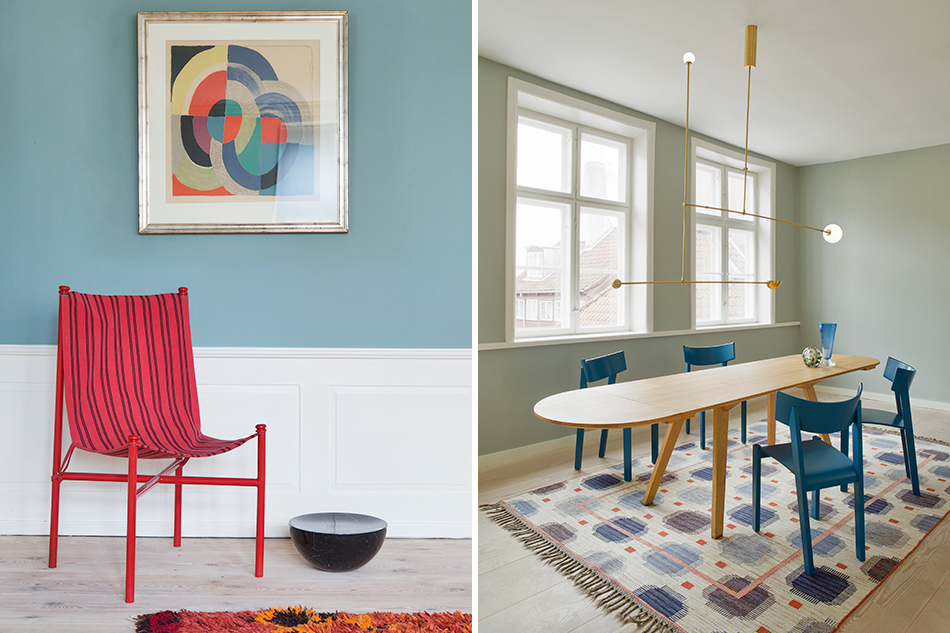 Left: A tubular steel Felix Aublet chair from 1935 meets a marble meditation stool by Anastassiades and a 1970s Sonia Delaunay lithograph. Right: The Together table by Ilse Crawford for De La Espada is paired with Swedish dining chairs from the 1980s atop a Blå Plump rug by Måås-Fjetterström. The brass mobile and light above the table is by Anastassiades. 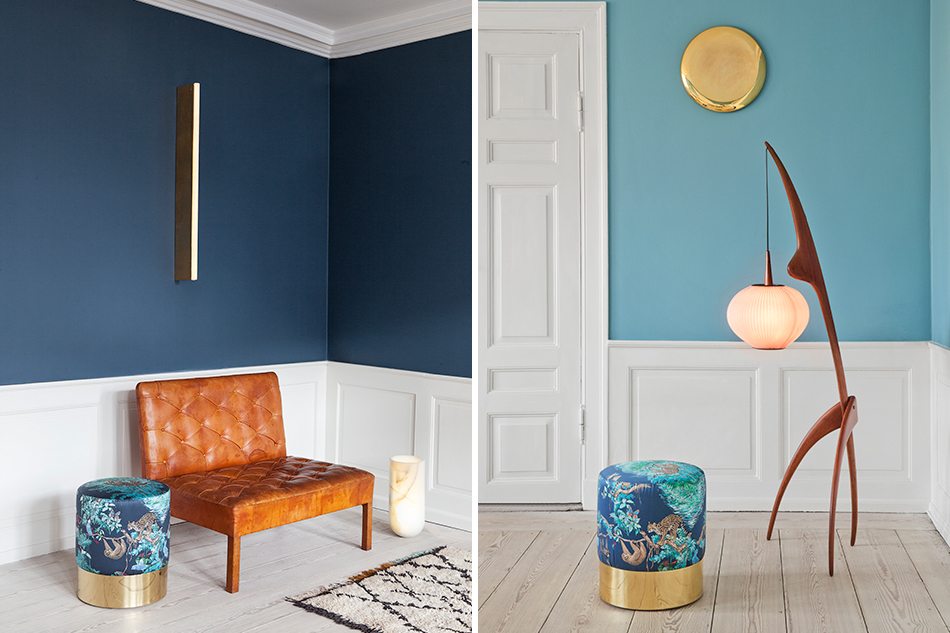 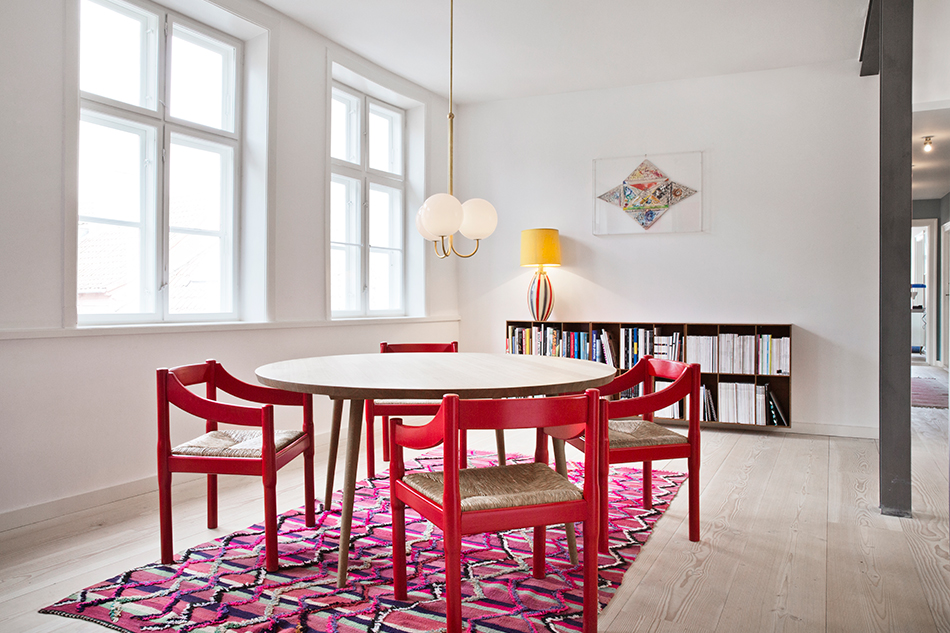 A dining table by Københavns Møbelsnedkeri and vintage Carimate dining chairs by Vico Magistretti are illuminated by a Triple Angle pendant by Anastassiades and a 1950s Ercole Barovier table lamp. The art on the wall is by Jean Tinguely. 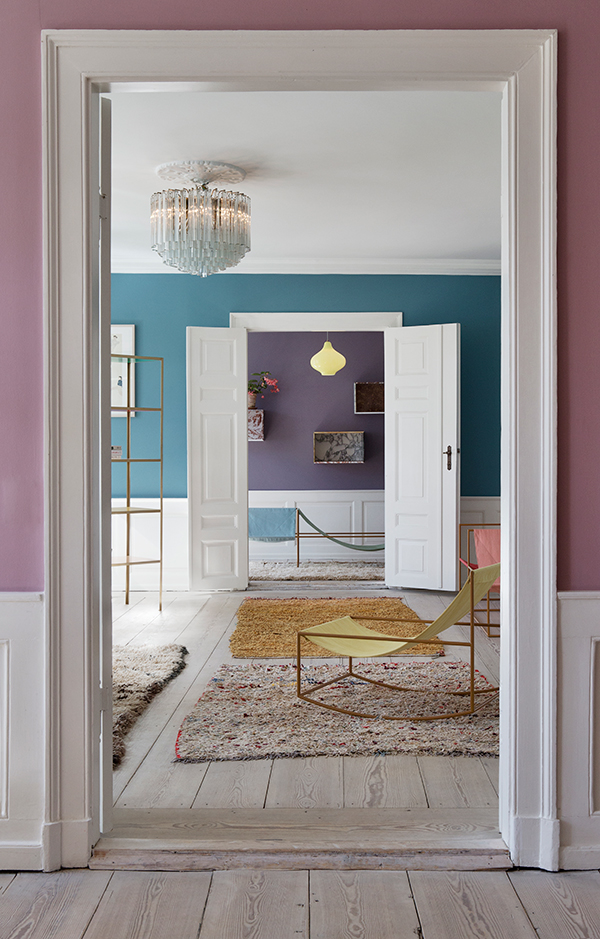 Chaise longues by Muller Van Severen are scattered among vintage Moroccan rugs. Hanging above them are a 1960s Murano glass chandelier and a yellow Massimo Vignelli for Venini glass pendant light from the 1950s.

Opened in 2011, the Apartment has been curated according to Busck’s inimitable style, which is a bold mélange of thoughtfully juxtaposed international designs — something new and different in a local landscape that strongly favors the streamlined Danish look. All the store’s spaces are kept fresh by near-constant updates and substitutions, as well as complete redesigns twice a year.

For her current inventory, Busck brought in stunning examples of Italian and French design, as well as Scandinavian works hailing primarily from Sweden and Finland, which are harder to find in Copenhagen than pieces from other countries in the region. The result is a vibrant mix of contemporary and vintage pieces. In one corner of the living room, a Josef Frank sofa in multiple shades of green and blue velvet mingles with an Italian armchair from the 1950s refitted with red and white candy-striped fabric, a 1940s Danish armchair upholstered in sheepskin, a mirrored French trolley also from the 1940s, a pink and peach Moroccan carpet and a yellow resin side table by the British design duo McCollin Bryan — all glowing under the refracted light of a 1960s Murano glass chandelier.

Throughout, the walls are hung with vintage and contemporary art, much of it sourced from local galleries, such as a folksy ceramic wall platter by Birger Kaipiainen. “Everything is so strong about Danish modernism,” Busck says, “but I think that the big designers, like Finn Juhl, would never have become who they were if they hadn’t looked beyond their borders.”

While growing up in Copenhagen, Busck was exposed to international culture by her art-collecting fashion executive father, who took her to museums and galleries. And like many of the designers she admires, she moved abroad before coming back to the city of her birth. After training at a local auction house, Busck worked as a junior cataloguer in Sotheby’s Old Master prints department in London and then returned to Copenhagen as the co-representative of Sotheby’s Denmark, sourcing pieces for global sale. After 10 years on the auction circuit, she took a position at Danish contemporary art gallery Andersen’s, started a family and began acquiring private clients, who sought her expertise when buying art and design. The Apartment was born. 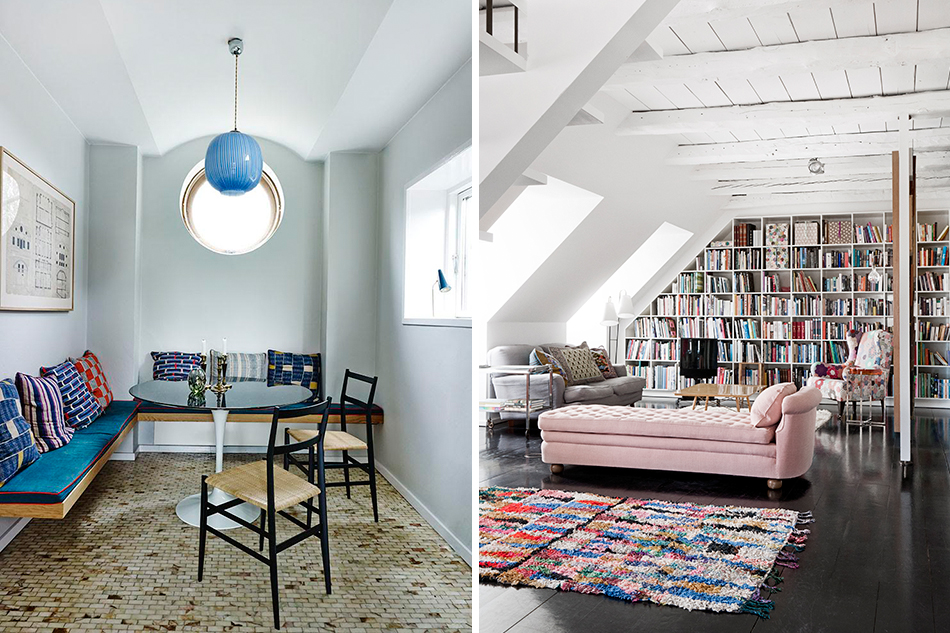 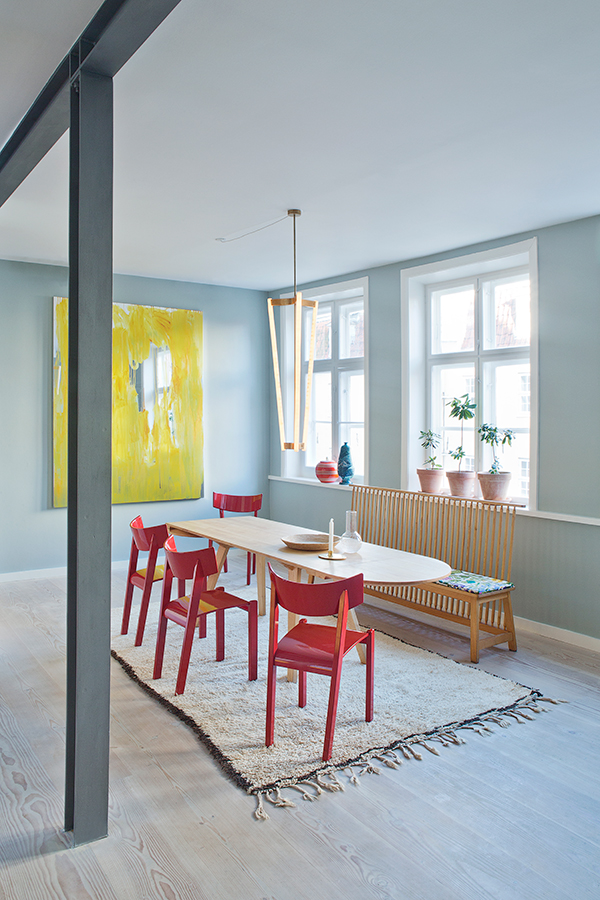 A simulated dining room in the Apartment features a table and bench by Ilse Crawford for De La Espada, Swedish dining chairs from the 1980s, a vintage Beni Ourain rug, a brass tube chandelier by Michael Anastassiades and a painting by Danish artist Peter Bonde.

“When I opened, I thought people would come just to see what it could look like, but then they started to say, ‘I would like to buy that,’ ” she remembers, laughing. “So hunting and dealing has really become the biggest part of my job. If I’m ever in doubt about buying something, I think, ‘Would I move it upstairs?’ And if I wouldn’t want to live with it myself, then I’m not going to buy it.”

Her aesthetic vision is solicited, as well, by commercial and residential clients, who have hired her for interior design projects ranging from a local cocktail bar to a 1930s home north of Copenhagen. The Apartment also occasionally operates as a creative laboratory of sorts. In 2014, Busck invited British design doyenne Ilse Crawford of Studioilse to occupy and reconceive the entire space for three months. Crawford installed a variety of her own furniture designs and vintage pieces, and she even brought in star chef Frederik Bille Brahe to cook dinner for a group of guests in the kitchen.

“What was interesting was to challenge the idea of people coming up to the Apartment to shop for expensive furniture or design,” Busck says. “It was suddenly all about coming up and sharing a meal. The furniture became part of the experience.”

In the name of keeping things fresh and lively, she represents a handful of contemporary designers, including Crawford, McCollin Bryan, Muller Van Severen, Michael Anastassiades and Cathrine Raben Davidsen, who recently created a series of ceramic lamps specifically for the Apartment. But Busck also remains passionate about pieces with a past. “So many things these days are just being bought and used and thrown out, and I really hate that idea,” she says. “It comes back to my love of craftsmanship and quality. For me, it’s really more important that things have a history or a story, that they have lived many lives. I like the idea of an old sofa that you just have reupholstered instead of tossing it out — and in that, it gets a new life.” 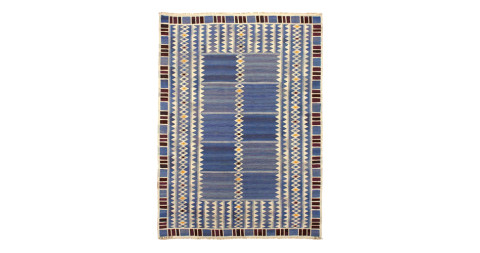 “I am a huge admirer of the legendary Swedish weaving studio of Märta Måås-Fjetterström. This rug has the most beautiful colors, and the time and effort put into its production amazes me every time.” 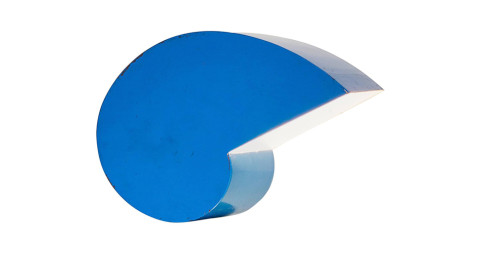 “The Snail lamp is such an outstanding piece, with its simple shape and bright blue color. I can never have too many lamps.” 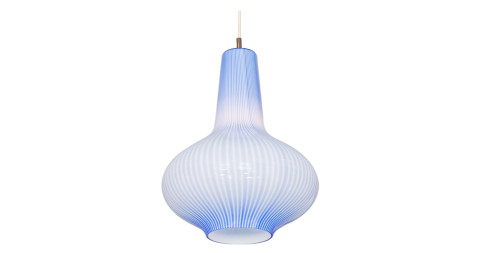 “This Vignelli lamp is like a piece of candy. It’s from the nineteen fifties, but the shape and color make it timeless.” 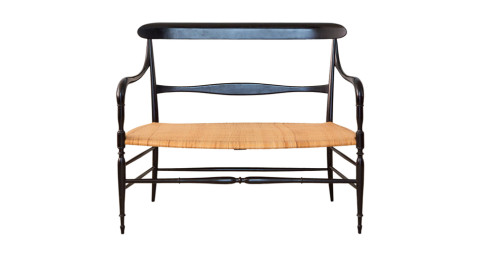 “I love the Italian Chiavari bench for its soft lines and craftsmanship. Benches are a cozy and practical seating solution.” 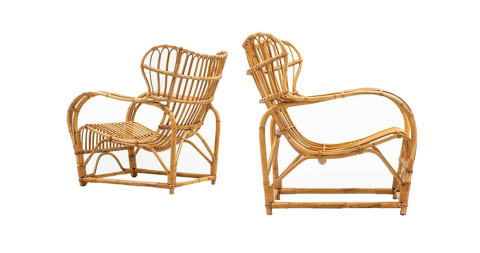 “I love the simple rattan structure of these Viggo Boesen chairs. I would style them with a pillow in a colorful textile to add a bit of softness.” 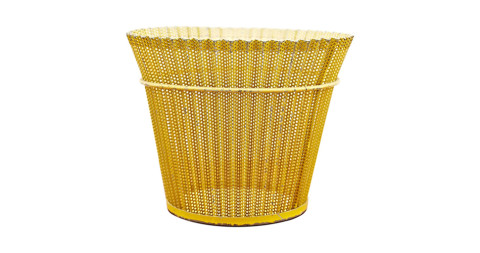 “It’s hard to find a beautiful paper bin. This one is like a little piece of art, with its perforated surface of yellow-enameled metal.” 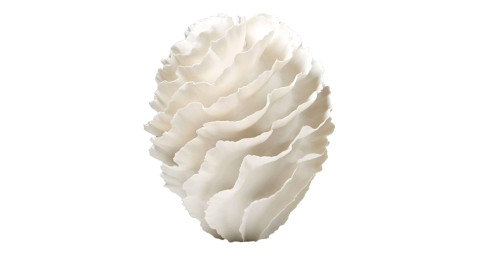 “I am so fascinated by how Sandra Davolio is making ceramic pieces that look so delicate and soft, as if they were made out of paper.”

VISIT THE APARTMENT ON 1STDIBS