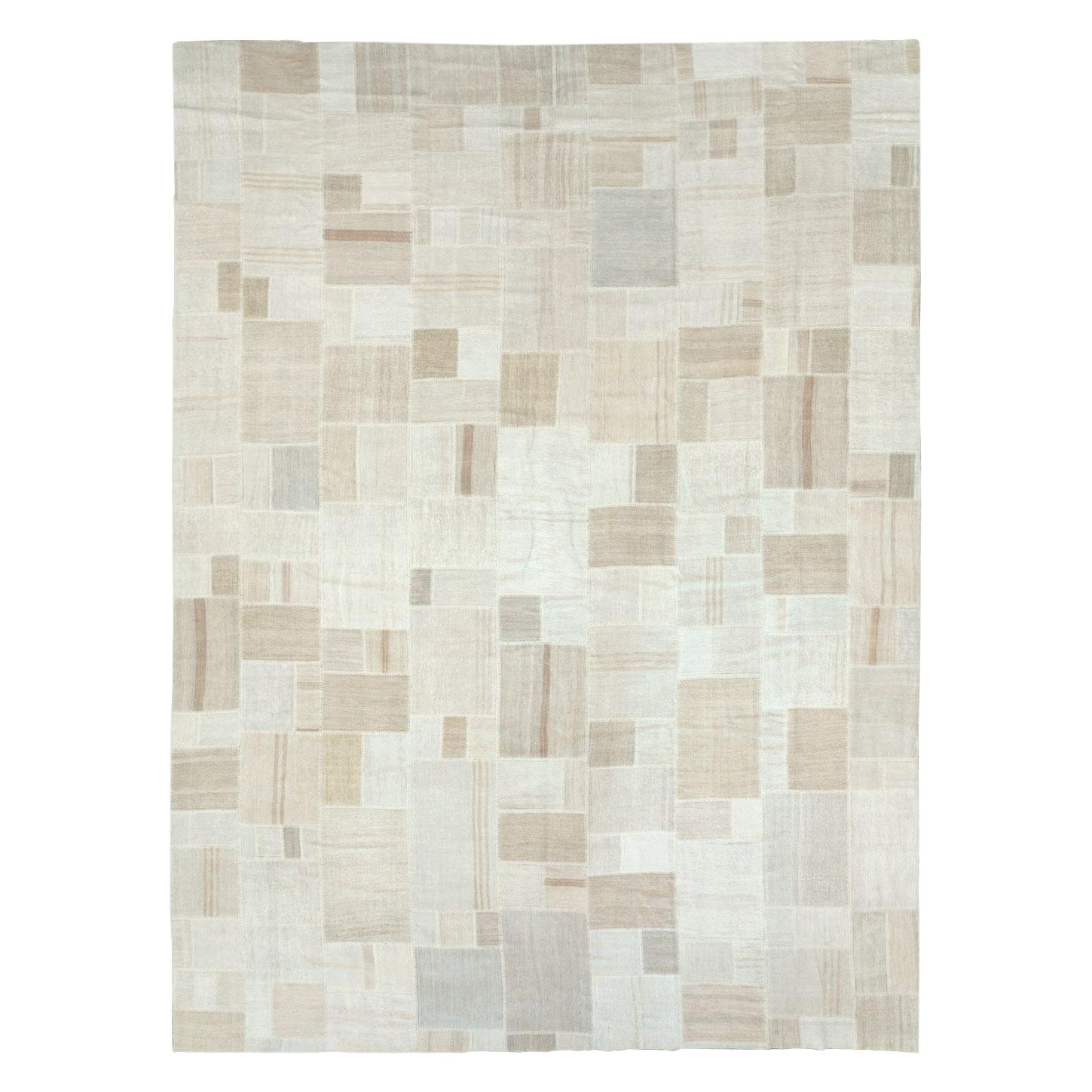 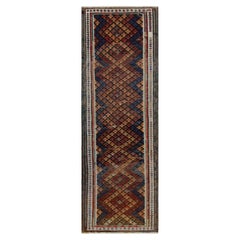 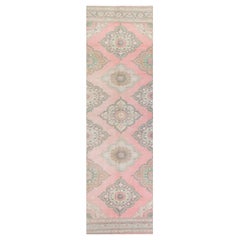 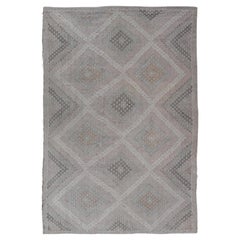 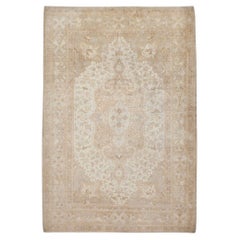 Turkish Hereke Silk Signed Extra Fine Rug, XXI Century
Located in Ferrara, IT
This is a silk Turkish Hereke Signed rug woven in Turkey during the beginning of the 21st century circa 2000-2010 and measures 116 x 83 cm in size. Great example from Hereke weaving,...
Category

Pillow Case Made from an Anatolian Cover, Mid 20th C.
By Seref Ozen
Located in Istanbul, TR
This pillow case made from a vintage cover from Adana, Turkey. The sitiching on it is hand done and in silk. It does not come with an insert. Linen in the back. Zipper closure. ...
Category

Pillow Case Made from an Anatolian Cover, Mid 20th C.

Antique Ottoman Turkish Metallic Thread Pillow Cover, Early 20th C.
Located in Istanbul, TR
It doesn't come with an insert but a bag made to size to accommodate insert materials. Linen in the back. Zipper closure. Dry Clean only.
Category

2.6x5.9 Ft One of a Kind Vintage Turkish Village Rug, One of a Pair
Located in Philadelphia, PA
Vintage Turkish Oushak rug. Hand-knotted in Turkey in 1940s. Measures: 2.6 x 6 ft Sturdy and can be used on a high traffic area, suitable for both residential and commercial interior...
Category

2.6x5.9 Ft One of a Kind Vintage Turkish Village Rug, One of a Pair

Large Sampler Turkish Oushak Floral Design, Made without a Border

Haze Editions Contemporary Kilim Area Rug Wool Handwoven in Maroon Red
By Begüm Cana Özgür
Located in Istanbul, TR
Haze is a contemporary Kilim rug collection inspired by the hazy view of landforms layered behind each other on a misty morning in Tuscany. This particular piece is a one of a ki...
Category

Kilim Perde Pillow Case from Anatolia Turkey, 1960s
Located in Istanbul, TR
It does not come with an insert. Linen in the back. Zipper closure. Dry cleaning is recommended.
Category

4.8x13.5 Ft Mid-20th Century Hand-Knotted Anatolian Runner Rug for Hallway Decor
Located in Philadelphia, PA
A vintage Turkish runner rug for hallway decor It was hand-knotted in the 1960s with low wool on cotton foundation and features a multiple geometric medallion design. It is in very g...
Category

Shag Pile Filikli Tulu, Flokati Rug
Located in Philadelphia, PA
This vintage handmade rug is called "Flikli" in Turkey which is a word for a "flokati" style shag pile (Tulu) handmade rugs produced for daily use by Nomads in Central Anatolia. ...
Category

Vintage Mid-Century Checkered Flatweave Rug
Located in New York, NY
The Mid-Century Modern Collection is skillfully sourced by N A S I R I and exclusive to our showroom. These flatweaves embody the minimalist sophistication that emerged in the mid-20...
Category

Handwoven Carpet Oriental Area Rug, Red Vintage Carpet Rug
Located in Hampshire, GB
Diamond medallions have been woven through the centre of this handmade wool area rug, constructed in 1960 with a traditional color palette of rust, orange and red. The elegant contra...
Category

Vintage Hand Knotted Turkish Oushak Rug with Medallion Design
Located in Philadelphia, PA
A finely hand-knotted vintage Turkish carpet from 1960s and features a medallion design. The rug has even low wool pile on cotton foundation. It is heavy and lays flat on the floor, ...
Category

Vintage Handwoven Kilim Rug with Vertical Bands, 100% Wool. 6.2x6.7 Ft
Located in Philadelphia, PA
This beautiful and simple flat-woven rug is made of wool. Reversible; both sides can be used. Ideal for both residential and commercial interiors. We can supply a suitable rug-pad...
Category

Handmade Oriental Turkish Carpets, Vintage Grey Tree, Black and White Area Rug
Located in Hampshire, GB
This oriental Turkish carpet is a handmade oriental rug coloured in different shades of black, white and grey. This traditional rug would be suited as a wall rug or placed on a wall ...
Category

5.8 x 8 Ft Vintage Anatolian Kilims Re-Imagined, Custom Options Available. D100
Located in Philadelphia, PA
This floor covering is made of pieces of assorted vintage handmade Anatolian kilims. Made of wool, cotton and goat hair. There is a durable cotton twill sewn on the back as an under...
Category

Red Antique Rugs, Handmade Carpet Turkish Kilim Rug, Sarkisla Oriental Rug
Located in Hampshire, GB
Sarkisla Kilims are handmade carpet from Sivas and are, on the whole, loosely woven in slit weave and generally of a coarse texture. The Sarkilsa Kilim rugs are one of the most decor...
Category

Mid-Century Modern Style Minimalist Mazandaran Stripe Flat-Weave Rug
By Nasiri
Located in New York, NY
Our Mazandaran Collection highlights the Minimalist sophistication that existed long before the modern era. These rugs are inspired by the kilims that were woven by Persian women in ...
Category

Antique, new and vintage Turkish rugs, with their ruby reds and misted blues, their entwined botanical designs and rhythmic geometries, are as beloved today as they were in the 13th century, when the Turks of the Seljuk Empire began weaving these vibrant carpets in Anatolia.

A Turkish rug is simply one made in Turkey or the former Ottoman empire, employing the region’s unique traditional methods and weaves. Varieties range from flat-woven kilims to lush knotted rugs, known as hali, many of which are created with Ghiordes, or Turkish, knots. Whereas in other knots, the weft (crosswise) yarn is wrapped around one warp (lengthwise) yarn, in Ghiordes knots, it is wrapped around two, imparting lushness and durability. In addition to knotting techniques, Turkish rugs differ in their motifs — naturalistic or stylized, geometric or figurative — which often reflect the region where they were made.

The main types of Turkish rugs, as Milan-based carpet dealer Alfredo Levi explains it, are kilim, typified by a plain slit-tapestry weave, which leaves a gap, or slit, between sections woven with different yarns in different colors; sumak, made with weft wrapping, for a sturdier flat-woven carpet; and cicim, which he describes as “a type of sumak with extra brocade techniques typical of the tribes and villages of central Anatolia. Within each type, there are various regional styles. Among these are Bergama carpets, characterized by bright reds and strong medallions; thick-piled Tulu rugs; and Konya rugs, which Marco Polo is said to have called “the most beautiful in the world.” With their strong tribal motifs and hot-red wefts of especially luxurious wool, Konya carpets are especially prized by collectors.

Also treasured are Oushak (or Ushak) rugs, with their complex, intricate designs and warm earth tones of saffron, cinnamon, blue, ivory and gold; and Hereke carpets, originally created exclusively for Ottoman sultans, using the finest silk. For Jason Nazmiyal, of New York carpet dealer Nazmiyal Antique Rugs, “a good Turkish rug is when the colors are harmonious.” This is true of both modern and antique Turkish rugs, but the hues have changed over the centuries, thanks to both technology and changes in culture and taste.

Patterns, too, have evolved. Although many weavers continue to produce traditional designs, others reinterpret their cultural heritage in contemporary terms, with bolder ornamentation and more geometric motifs. Contemporary Turkish rugs also are seldom made by hand and often incorporate synthetics into the weave, for cost-effectiveness and a durability suited to 21st-century life.

Find antique, new and vintage Turkish rugs for your home on 1stDibs. At The Study, read about how to take care of your antique or vintage rug as well as how to choose the right rug for your space.