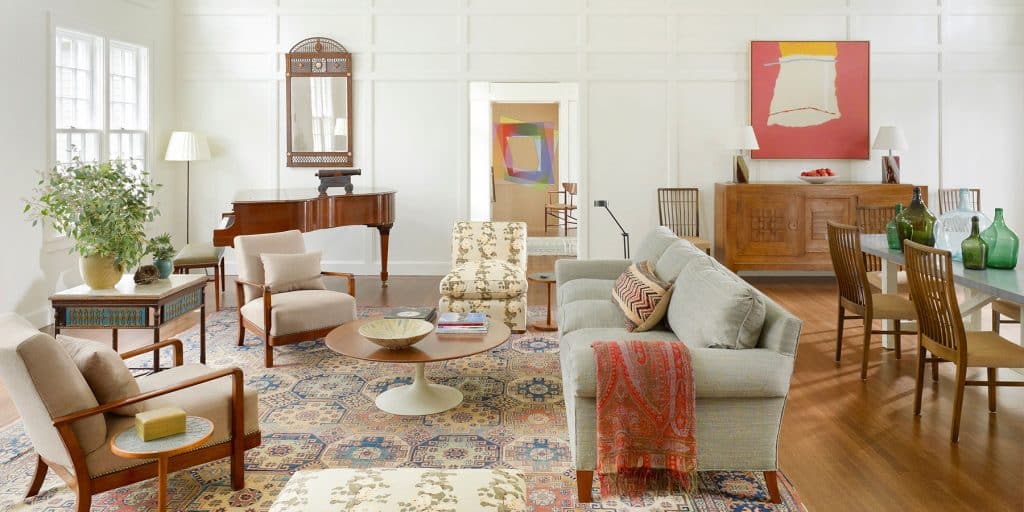 June 21, 2020Nazmiyal Collection, in Midtown Manhattan, is a wonderland of antique and vintage rugs spanning centuries and cultures, from 17th-century Persian Kirman carpets to mid-century modern creations by Märta Måås-Fjetterström to art rugs by the likes of Pablo Picasso, Joan Mirò and Paul Klee. This variety has made it a premier source for exceptional floor coverings

“Right now, I have one of the biggest inventories in the world, with over three thousand fine and decorative pieces,” says owner Jason Nazmiyal, noting that the vast array reflects his voracious appetite for rugs of all kinds. “I like everything,” he says. “My taste varies from third-century Coptic textiles to mid-twentieth-century Moroccan and Scandinavian rugs.”

As a result, even as Nazmiyal Collection sells directly to homeowners, it also remains a favorite among such top-tier designers as Michael S. Smith, Victoria Hagan and Thomas Jayne. “You always know you’re going to see some beautiful things there,” says Jayne, who estimates he has purchased more than a hundred rugs from Nazmiyal over the years. “A lot of rug dealers are very technically conscious. They talk about how many knots a carpet has and all the points of connoisseurship that add value, but Nazmiyal understands the artistic value as well. Sometimes, how a rug appears gives it as much value as how it was made.”

Nazmiyal hails from Iran and has sold more than his fair share of Persians, but it would be wrong to assume that his success grew directly from a multigenerational family business that he took over or inherited. Instead, his story is a classic American tale of hard work, perseverance and creativity.

Raised in Tehran, Nazmiyal was the son of a restaurateur. When the Iranian Revolution began, in 1979, he was a teenager. His parents sent him and his brother to study at American University, in Washington, D.C., and in the years that followed, as the value of the Iranian toman plummeted, he was left on his own with little financial assistance. “I worked as a busboy, pumping gas and doing whatever I could to support my tuition,” says Nazmiyal, who studied computer science.

After graduation, in the early 1980s, while searching for a way to make ends meet, he accompanied a cousin who had gotten into the rug business on a delivery run to Short Hills, New Jersey. There, they spied an empty 700-square-foot storefront and decided to set up a carpet shop of their own, together with Nazmiyal’s brother. “We knew nothing and were learning every day,” says Nazmiyal. After many long hours and much heavy lifting, they developed a solid customer base. They expanded the store into a larger space next door and opened a second New Jersey outpost, in Morristown.

By 1995, Nazmiyal was ready for his next challenge. He decamped to Manhattan, where he established a wholesale operation focused on supplying rugs to other dealers. Business was brisk, and he attracted clients around the world.

It seemed like a wise move, up until the economic fallout of the terrorist attacks of September 11, 2001, disrupted his operation. “After that, it became so hard to collect money from the dealers,” says Nazmiyal, who was left with a stockpile of antique rugs that weren’t going anywhere.

Looking for a remedy, Nazmiyal drew on his training in computer science. He decided to once again sell directly to consumers and designers, as well as through auction houses, but to extend his strategy online. He generated informative, SEO-focused blog articles about the design and manufacture of rugs and worked hard to get his content noticed by search engines. “Every other rug dealer was laughing at us,” says Nazmiyal. “They asked, ‘Who would buy a rug without seeing and touching it in person?’ They said it was impossible to sell online.” (The experience will sound familiar to many 1stDibs dealers.)

Of course, it was anything but impossible. Nazmiyal’s business flourished. The digital pivot also prepared his company to remain strong during the current pandemic. “More people than ever have been visiting our site, reading our articles, searching our inventory and requesting more information,” he says.

As the years ticked by, he added modern and custom carpets to his showroom’s offerings, in response to client requests. His greatest passion, however, remains seeking out old rugs with remarkable designs and colors. “Antique and vintage rugs are unique. Each piece has its own extraordinary story to tell,” he says. “But finding good examples is difficult, and becoming even more so with each passing year.”

Nazmiyal hunts every day for rugs to add to his collection and purchases about 10 of the best examples he can find each week. That positions him well to take advantage of the return to bold hues and patterns that he foresees.

“Over the past ten years, we saw a trend toward minimalism, with less color and less design, where they worked with texture” in rugs, Nazmiyal says. “Nowadays, the trend is coming strongly back toward color and design.”

For people now taking a second look at antique rugs, he adds, it is an excellent moment to buy. “I’ve been in business for over thirty-five years, and there has never been a time when antique rugs were this inexpensive and available,” he says. “It’s a phenomenal opportunity.”

Jason Nazmiyal shares his thoughts on a few choice pieces 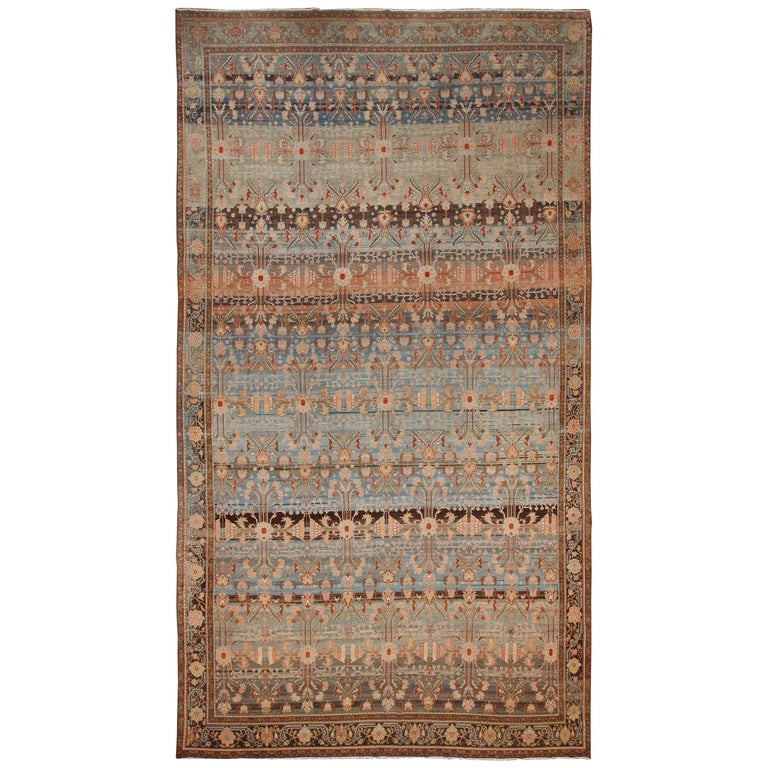 “This antique Persian Malayer is possibly one of my favorites. It has colors of earth, sky and water. It is a rug that you will never get tired of looking at or living with.  It was created using a high level of detail and shows an impressive level of artistry and skill. The pile of the carpet is cut short to keep the design crisp. The colors are earthy and rich, giving it a regal feel. Finally, the design was created with a precision that is not always found in village carpets, making this piece stand out for its excellent representation of the skill of smaller weaving communities.” 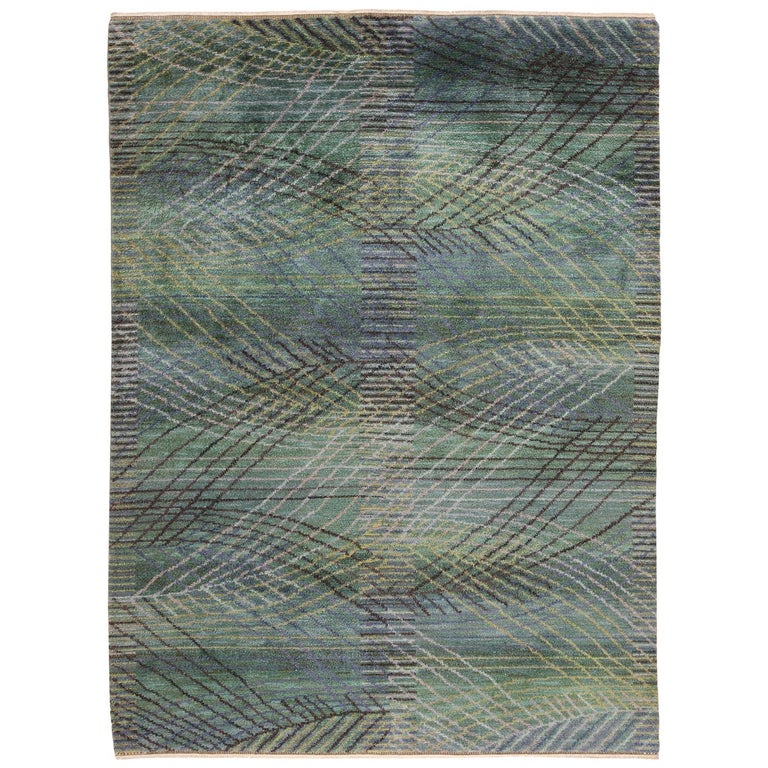 “This gorgeous Märta Måås-Fjetterström carpet from the mid-twentieth century is the perfect piece for contemporary room designs. What I love about this rug is the harmony of colors and how they just blend into each other. Måås-Fjetterström was a mid-century Swedish designer whose style is considered iconic. Her creations eventually became world-famous and helped to define and influence many modern design styles.” 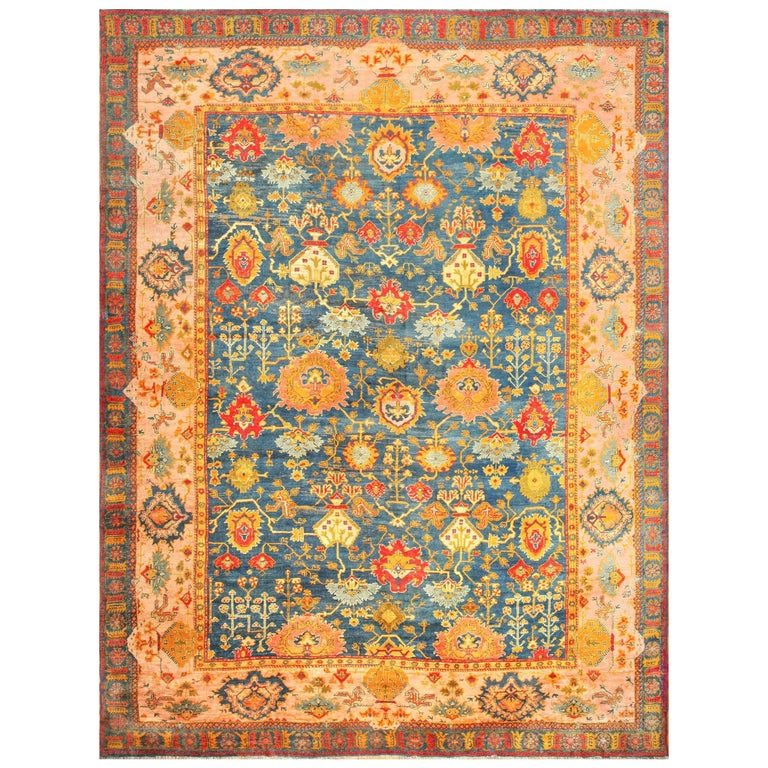 “True to the style of some of the best antique Oushak rugs, this Turkish masterpiece focuses on a high degree of negative space that allows the vibrant colors within to speak for themselves. The viewer is treated to a kaleidoscopic effect, where the sense of wonder shows through every layer. A smaller border leads into a larger one, which, in turn, leads to the center of the rug. All of the sections of this impressive rug have the same foreground motifs: frolicking petals, dancing vines and wide, beautiful fronds. They are all seemingly connected as they take the viewer on a journey through the twists and turns within.” 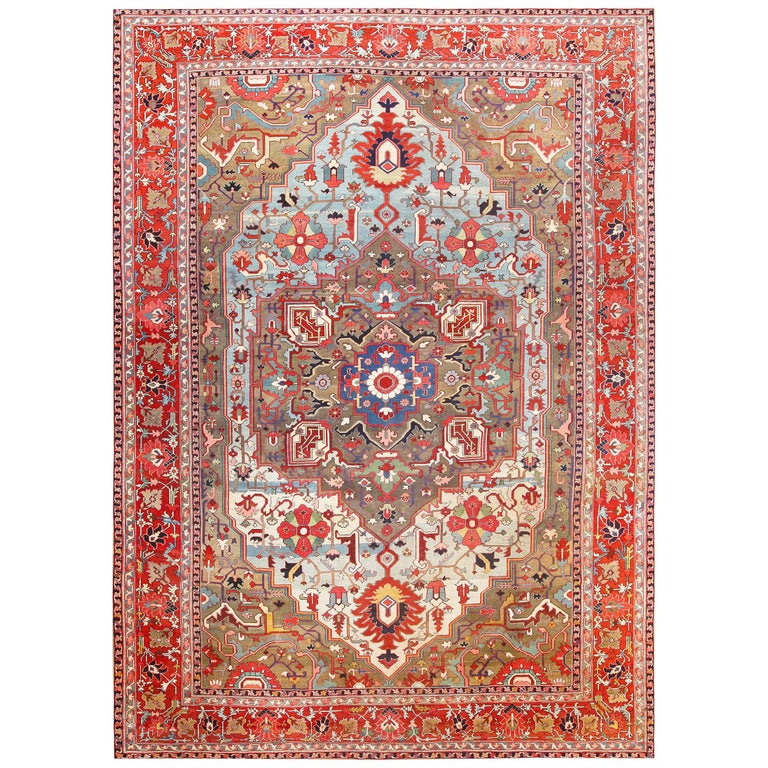 “This antique Persian Heriz Serapi rug is like no other. The magnificent jewel-tone colors and variations in a not-so-classical presentation would make a spectacular addition to any traditional or modern interior design. The first thing that draws attention in this tribal rug is the full range of crisp, happy colors that were used to create the details, background and design elements.” 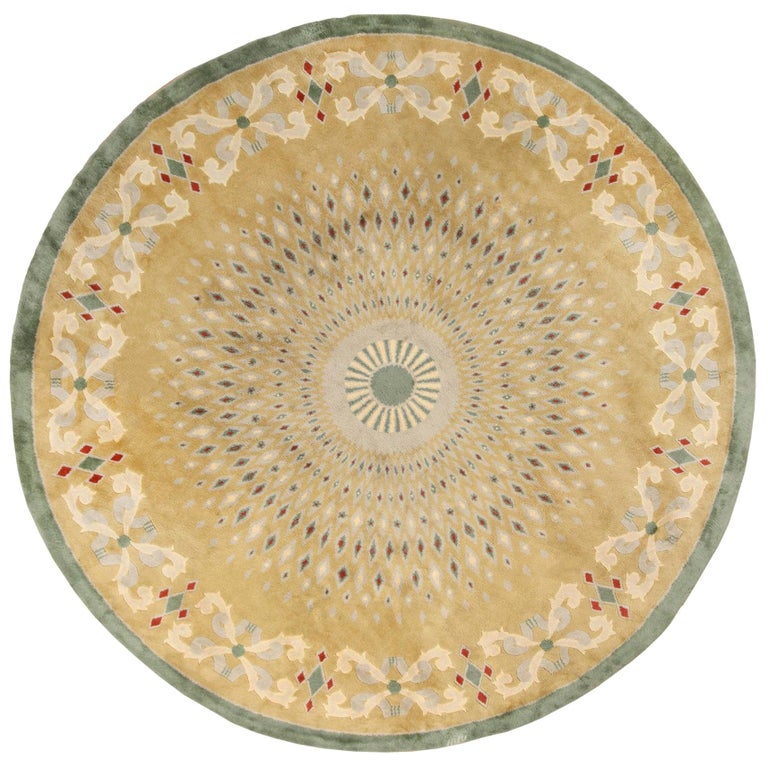 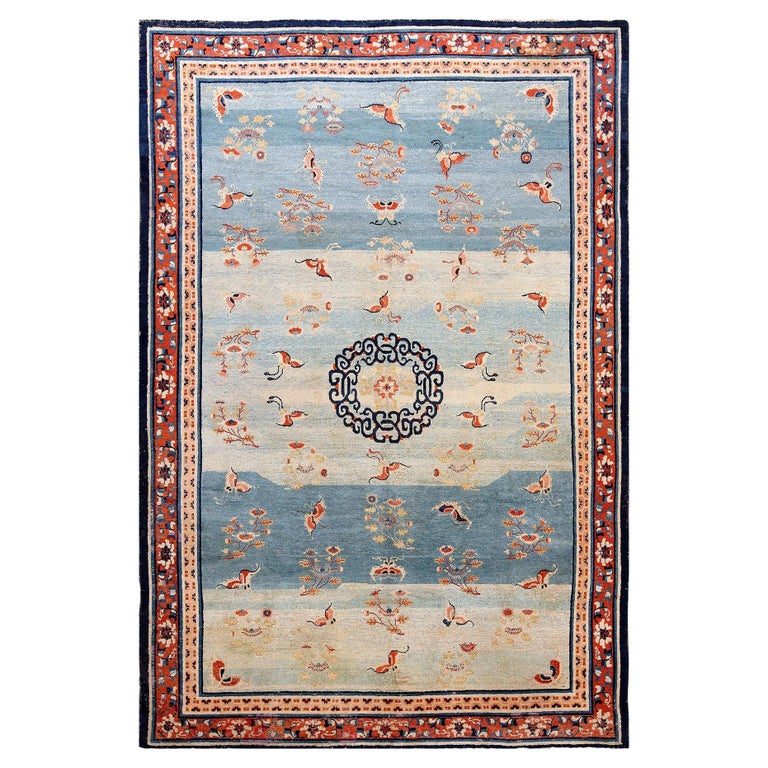 “Graceful butterflies dance among delicate flowers across a heavenly blue sky on this eighteenth-century Kansu carpet from China. This superb example of Chinese art connects earth and sky using red and coral colors against abrash shades of beautiful blues. The delicate motifs and subtly shifting tones give this rug a feeling of floating on air.” 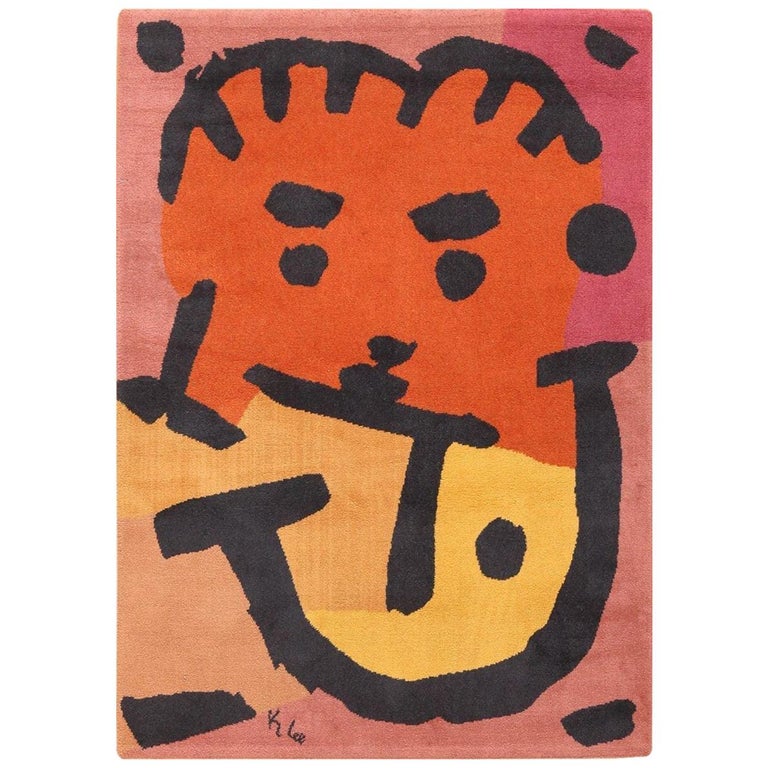 “For many years, I’ve been quietly building a collection of art rugs by artists like Andy Warhol, Pablo Picasso, Roy Lichtenstein, Sam Francis and many more. I could now say we have possibly the most extensive collection of art rugs in the world. The childlike qualities in this art rug by Paul Klee are seen in many of his works.” 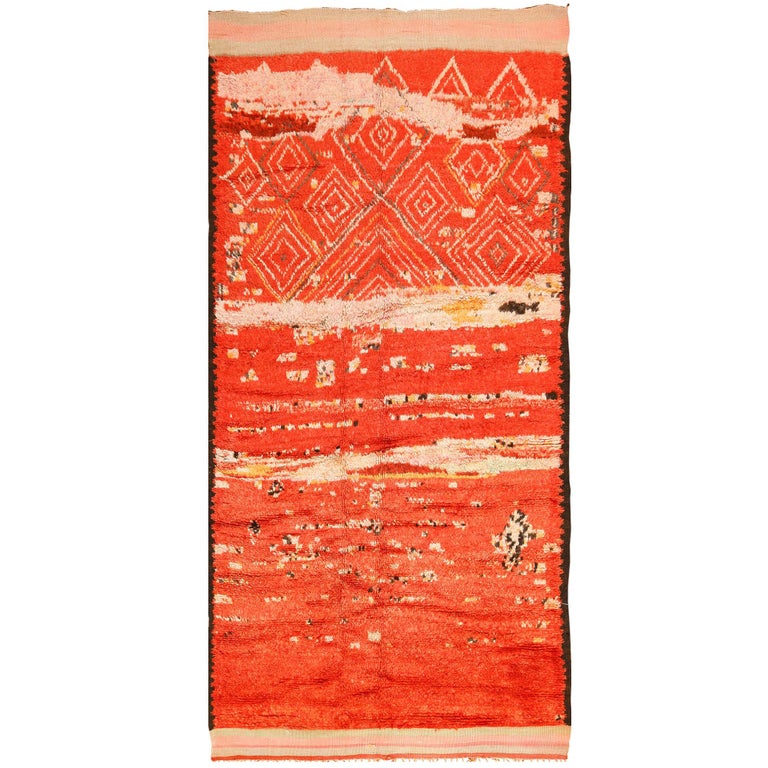 “I love Moroccan rugs. Some of them are the lowest-priced forms of art you can get if you know how to choose them. Mid-century rug collectors grew fond of them because of their abstract qualities, which were similar to the art being produced by some of the world’s greatest artists at the time. This heavy abrash rug is unique in that it appears to have four different sections, each with its own motif. Fiery reds, yellows, oranges and darker colors blend to form the various shades of the warm color palette. The four sections of the design are separated by areas where it looks as if someone had swiped their hand across to erase some design.” 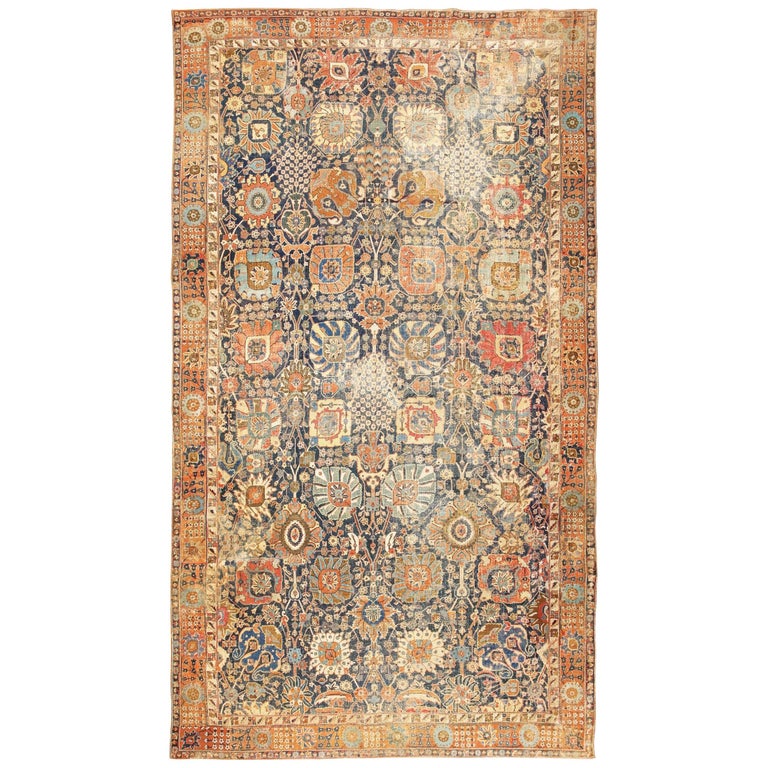 “This Persian vase carpet is the most expensive rug on 1stdibs, going for $3.2 million.”