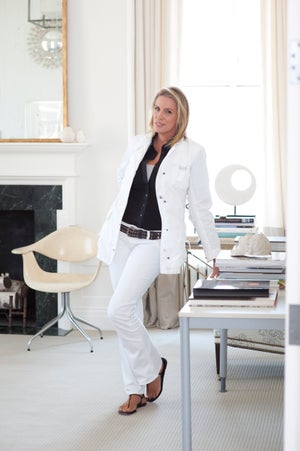 I remember it well.

It was the 1990s, and I was coming of age as a journalist in Manhattan. It was an exciting time in the world of design, with a new generation of talent cleaning house. The new look and the new buzzwords were clean, simple, modern and honest. And though this gleaming new age was about simplicity, it wasn’t a quiet movement—it felt more like a revolution.

No one exemplified this new spirit better than a young designer named Victoria Hagan. But by far the greater part of her genius lay in the finished product, which somehow never looked done yet always looked right. Whenever and wherever she worked her seemingly effortless magic, the results always felt so natural, so perfectly thought out and so quietly splendid that it seemed that there couldn’t possibly be any other way to approach it. The subtly chic, tailored look she created, with its palette of pale (but delicious-sounding) hues like sage, butter, cream, and caramel with pops of bold color felt like it became iconic overnight. Her special, highly individual mix of traditional and modern elements became an immediately influential signature style that brought her much attention, along with the nation’s most prominent clients and magazine features alike.

As the new millennium bloomed, she not only became a leading voice of her generation, but achieved a level of status few designers ever do: that is, transforming from a noun into an adjective, as more interiors everywhere started to be described as “Very Victoria Hagan.” That meant clean and serene, a flawless mix of then and now, and an everyday sense of luxury both sublimely comfortable and surprisingly practical—and heaven to come home to. It was grand without grandeur. Small wonder that in an elite world known for its obsession for lists of the planet’s most desirable status symbols, having Victoria Hagan on speed dial became one of the supreme markers of success.

Finding that place where beauty and comfort and fantasy and reality all meet and mingle is the true essence of her talent. Whatever the project, Victoria Hagan finds the sweet spot.