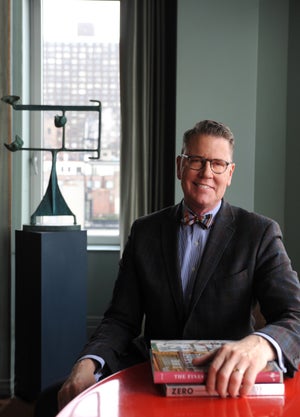 Over the past 25 years, Thomas Jayne’s Design Studio has developed a reputation for creating rooms that are traditionally inspired, but modern in spirit. The New York-based firm is known for tailored, comfortable houses and apartments that meet the present day needs of its clients, whether they are young families or advanced collectors. Every project is unique and particular, enriched with custom elements and specially commissioned works by artists and artisans, often highlighting aspects of a home’s historical setting or context. The firm is also known for its skill in working with private collections, whether they be art, antiques, historical relics or found objects, and making them a vital part of the decoration.

Thomas Jayne received a Bachelor of Arts in Architecture and Art History from the University of Oregon School of Applied Arts, and a Master of Arts in American material culture from Winterthur's graduate fellows program. He completed several advanced fellowships at the American Wing of the Metropolitan Museum of Art, Historic Deerfield and the J. Paul Getty Museum before accepting a position at Christie’s Estates and Appraisal Department. His interest in architecture and the decorative arts naturally lead him to pursue a career in interior design. He was fortunate to work in two of the most influential design studios in America, Parish-Hadley & Associates and Kevin McNamara, Inc., before opening Jayne Design Studio.

In addition to his well-regarded practice, Thomas Jayne is a noted author, frequently writing on historical themes in art, architecture and decoration. He has released numerous, highly acclaimed books with the Monacelli Press, including "The Finest Rooms in America" (November 2010), a monograph of his work "American Decoration" (October 2012), and "Classical Principles for Modern Design" (January 2018), a modern response to Edith Wharton and Ogden Codman's classic design manual "The Decoration of Houses".

Thomas Jayne has a team of established designers working at his firm. In October 2018, Senior Designer William Cullum was awarded "Next Wave" by House Beautiful, featuring him as one of the most talented up-and-coming designers.

The 1stDibs Virtual Showhouse: 10 Interior Designers Reimagine Iconic Rooms
Picture a showhouse with no bad spaces — no powder rooms squeezed under the stair, no libraries riddled with unattractive soffits, no cramped butler’s pantries sandwiched between kitchens and dark hallways like an afterthought. Instead, every room is exceptional, the product of a brilliant, revolutionary design mind. Where is this magnificent manse? In virtual reality, […]
Read More
Bound to Books
In our frenetic contemporary landscape of innumerable hand-held devices, books — those leather-bound archives of paper pages — can bring us back to a calmer, more peaceful place. And, when used not only as reading material, but also as decorative objects in an interior, they cultivate an atmosphere of warmth and erudition.
Read More
Jayne Design Studio Inc. - AD100 2016 | Architectural Digest
Read More
A Day in the Life: Designer Thomas Jayne
What’s better than a bowl of lobster jambalaya? A day in the big easy with Designer Thomas Jayne.
Read More