Getting to the starchitect's masterpiece can be a trek. Here's how to enjoy the journey.
by 1stDibs
Pin
Share
Tweet
Email 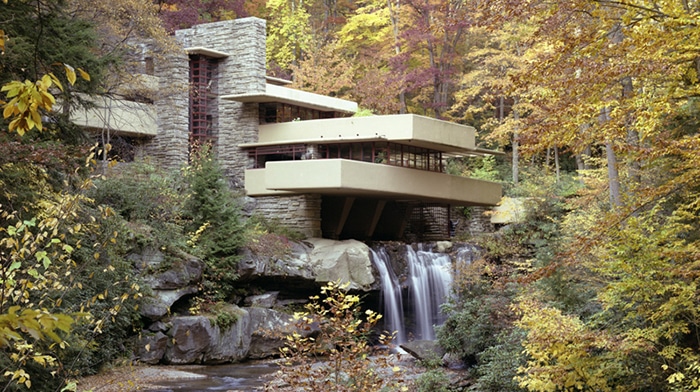 Getting to Wright’s 1935 masterpiece Fallingwater is a trek, but well worth it. Image from Fallingwater.org

Frank Lloyd Wright’s Fallingwater — the architect’s epic ode to modern organic architecture nestled atop an active waterfall in the Laurel Highlands of Pennsylvania — has undoubtedly secured a place on design lovers’ list of “Places to Visit Before I Die.”

Wright designed the home in 1935 as a vacation property for the Pittsburgh-based businessman Edgar Kaufmann Sr. Upon its completion, Fallingwater became instantly famous, appearing on the cover of Time in 1938. Today, it continues to dazzle visitors with details that include a living room fireplace that incorporates boulders from the property; sculptural, cantilevered terraces; and the incredible interplay between the house and its stunning natural surroundings.

Even though a trip to Fallingwater is a must-do pilgrimage for architecture buffs, it’s not an easy one: the closest airport is an hour and a half away. But the journey is part of the experience. So with this in mind, we came up with a design-friendly itinerary that makes getting to Fallingwater (nearly) as rich of an experience as seeing the building itself. To wit, here’s where to stay, eat, and shop in and around a visit to Wright’s masterpiece. 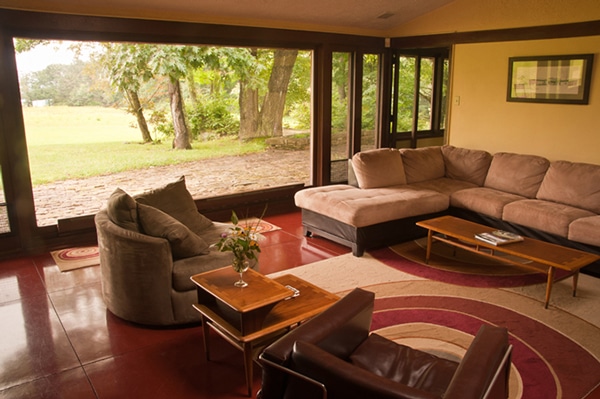 An interior of a Wright-designed Usonian home in Polymath Park. Image via Pittsburgh Magazine.

Given that Fallingwater is located in rural Pennsylvania, don’t come expecting five-star design hotels. Instead, immerse yourself in the Wright experience by renting The Duncan House, located in Polymath Park. Designed by Wright himself in 1957, the house was originally located in Lisle, Illinois, and relocated to Pennsylvania in 2007. This classic Usonian home is perfect for groups — it can sleep up to six — and is about a half-hour’s drive from Fallingwater. Rates from $399 a night.

The classic brick facade of the Georgian Inn of Somerset.

If a full service hotel is more your speed, check into The Georgian Inn of Somerset, PA. Built as a private residence in 1915 for a coal and cattle baron — at the time, a local newspaper called it “Somerset’s Most Pretentious Home” — the now-hotel comprised of 16 rooms and suites has earned a much-deserved spot on the National Register of Historic Places list. Each room here is unique, including one located in the original library of the home, and another, which is the original master suite of the house and includes a cherry wood fireplace and freestanding tub. Rates from $135 a night.

Jeff Fryer, the owner of the Out of the Fire Café in the town of Donegal, PA, built his restaurant around his signature smoked salmon recipe. Farm-to-table is the name of the game here, and the restaurant is also a proponent of the slow food movement. Much of the menu changes daily, but locals swear by the signature smoked salmon platter ($13) to start, along with main dishes from pecan wood smoked pork chops ($26) to sea scallops with a side lobster salad ($28).

Get a truly local experience at Shepherd’s Farm, which known for its two specialties: lamb and locally made soft serve ice cream. Order up a lamb sandwich ($10) — comprised of herb rubbed and slow-roasted lamb served on a warm bun with a side of horseradish — and then grab a picnic table outside overlooking rolling hills and the farm’s own flock of sheep which can be seen grazing the hillside. 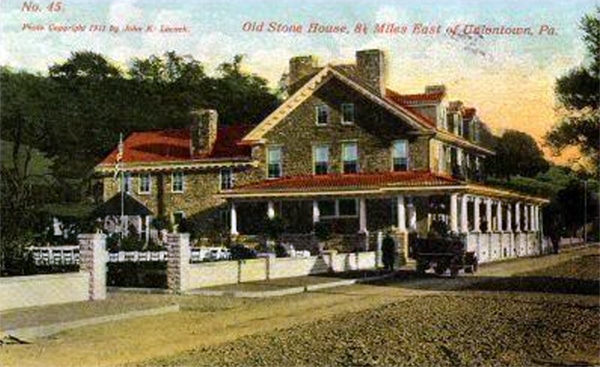 The historical Stone House, as depicted in a 1910 photograph.

Another food lover’s pick in the area is The Stone House Restaurant & Inn in the town of Farmington. Open since 1822, the restaurant is known for its stellar BBQ, including a mouthwatering beef brisket sandwich ($14) and signature ribs ($17). After dinner, hang out over a craft beer at the inn’s tavern. 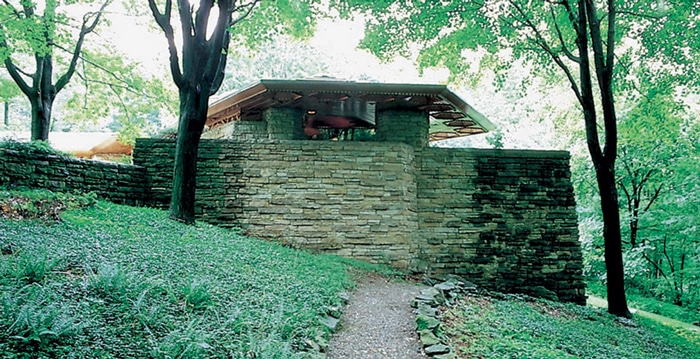 If Fallingwater isn’t enough to quench your thirst for all things Wright, visit Kentuck Knob, a lesser-known house that Wright designed in 1953 while he was simultaneously working on the Guggenheim Museum. Bonus: it’s just a seven-minute drive from Fallingwater. Made of tidewater red cypress wood, glass, and sandstone, the house is nestled into a hillside, and though it’s still a private residence, it is open to tours. The current owners added a sculpture meadow, which includes pieces by artists like Anthony Caro to Claes Oldenburg.

Antique-lovers should take advantage of the “Route 30 Antiquing Trail” while visiting Fallingwater, which winds its way from Pittsburgh through the towns of Ligonier, Latrobe, and beyond. If you’re driving in from New York, pull over in Dillsburg to visit Jeff R. Bridgman, one of the country’s top sources for Americana and folk art, including beautiful antique flags. You can also stretch your legs at Silla Fine Antiques in Shippenburg while browsing late Colonial American furniture and French bronze statues. Once in Pittsburgh, stop by Mark Evers Antiques; their wares include Wedgwood lamps and Louis XVI game tables.

Both Fallingwater and Kentuck Knob offer special tour packages including the “Sunset Tour” at Fallingwater, when you can experience the house at night, and the “Brunch Tour” at Kentuck Knob, which allows visitors to eat in the Art Room of the home’s original owner, so make sure to ask about the unique tour options at both of these Wright homes when planning your visit.

Story by Leah Bourne. Bourne is a NYC-based arts and culture reporter.