Tantuvi may be headquartered in New York City, but its rugs and textiles are woven with traditional handlooms by seventh-generation weavers outside Jaipur, in Rajasthan, India. This means that the founders of the 10-year-old company — designer Arati Rao and artist Adam Sipe — make frequent trips to the subcontinent, where they spend much of their time in the Thar Desert.

On car journeys throughout the region, they often pass through cities and villages set against a dramatic landscape of marble and quartz quarries, mountains, sand dunes, magical desert lakes and jungles. “The sandstone color that permeates all these landscapes is always on my mind,” Rao says. “Travertine quarries are all over the region, and the earth changes from beige to ocher then deep ruby as you move throughout.”

These colors, which occur naturally in the layers of the earth, were the inspiration behind Tantuvi’s latest collection, called Travertine. The travertine of another design capital, Rome — which they visited on a family trip prior to designing the collection — inspired the addition of pinks and greens to the color palette.

“Our new series reflects the diverse terrain and variegated inconsistencies of nature,” Rao says. Nature felt especially relevant, designing this collection after a year in which production schedules were heavily swayed by a long drought, which brought desert sandstorms, and an early monsoon’s torrential rain.

The patterns on Tantuvi’s Travertine rugs create a colorful topography that derives added luster and texture from the repurposed discarded silk that’s been woven in. “This new collection continues to experiment with the limitations of handloomed rugs and what compositions are possible to weave,” Rao says.

With the launch of Travertine, we spoke with Rao about how Tantuvi works across time zones to preserve time-honored techniques and support small-scale and sustainable production by artisans maintaining India’s weaving heritage.

It was time spent traveling India in 2010, after leaving a career in commercial fashion, and reconnecting with your ancestral roots that first inspired you to start Tantuvi. Can you tell us about that trip?

When I left for India in 2010, I had no real plan. I just knew that I wanted to learn more about craft and design, to see what was possible. After working in corporate fashion with no transparency, it was important to me to work directly with artisans. India has an incredibly rich weaving heritage, and I wanted to educate myself on the process and see what I could create there.

We were there for about eight months, traveled all over, from the southernmost tip all the way into the Himalayas. We saw such talented makers — not only weavers but potters, woodworkers and marble cutters. After returning to New York, I quickly realized how difficult it would be to work directly with artisans. It was another two years before we actually had samples and materials, as I had to consider what weavers were best prepared to work with me overseas.

I definitely went in with lots of ideas and things I thought I could do, and it was very clear how difficult it is to implement change or be experimental.

What’s unique about weaving in India?

In India, with flatweaves in particular, there is a fine element to them. They are very tightly woven, and the cotton or wool fiber used in the weft is also not as thick as in rugs from other countries, it’s a finer thread. Weaving in this region goes back over 500 years. This is a craft that is passed down to each generation.

India overall has different techniques and specialties within each state, and you find a diverse range of methods going back well over a thousand years. It’s such an integral part of the culture and identity of India that the spinning wheel is on the flag.

Beyond the traditional weaving techniques used, how does India inspire your design or your ethos?

I know everyone says this about India, but the colors and the light there are really amazing. There isn’t another place like it. The population density is the same as the design density there. Within one town, you’ll be surrounded by centuries of design and layered history all around you.

The chaos of India is an endless source of inspiration. You never see the same thing twice. We visit the same places on every trip and still seem to be uncovering new inspiration.

How do you go about securing suppliers on the other side of the world?

I was at a bit of an advantage. I speak two Indian languages — not well, but it still helped forge these relationships. I also went with some knowledge of what techniques each part of India specialized in, which helped narrow down who to work with.

I started off with a very well-organized weaving cooperative in South India, as they had a great training program and were invested in keeping these methods alive. When securing suppliers overseas, you have to visit in person. Without going there and seeing the process and who is behind it all, it’s hard to know what is really happening, and even then, you might not really know.

Is it a challenge collaborating across time zones?

Generally, our production manager in India handles our day-to-day, and we have daily check-ins in the morning. But when we’re busy with many projects, we have 7 a.m. and 11 p.m. meetings to go over everything. It can be a challenge when a client needs an answer and it’s midday here, middle of the night there, but people understand this is a part of our process.

Was there anything you learned from working in the fashion industry that informs your current practice?

Absolutely. I think having the supply chain/production understanding is a big bonus. In fashion, things are at a much faster pace, so working around festivals and the seasons is something I know to factor in when planning the production calendar. When designing, I work on my research in the same way I did with fashion, pulling images and making inspiration boards. I still love looking at fabrics and fashion for color inspiration.

What do you base your patterns on? How do you choose colors?

A lot of the designs come from considered spatial arrangements, and the colors initially reflect foreground, background and gravity. These constraints are pretty quickly tossed as we start playing with swatches and looking through our camera roll for snapshots of interesting moments of color we see in daily life and art.

How does the idea of travertine translate to what you see in the rugs?

The rugs have the impression of layered earth, quarries and stone in nature and in architecture. We’d encountered so much travertine, basalt, marble and granite in the months prior to designing them that the minerals’ influence became evident.

Were there specific buildings or neighborhoods in Rome or India that inspired the collection?

Piazza del Popolo, Piazza Navona, the Spanish Steps, the floors of the Vatican — travertine is everywhere in Rome, a basic building block of the city.

Shortly after being in Rome, we were in India for a quick production trip, and seeing all the quarries during our drives between villages kept Rome on our mind. In Jaipur, marble floors are everywhere — it’s the equivalent to the wood-floored spaces of New York.

Jantar Mantar, in Jaipur, is always an inspiration, as is the stepwell of Nahargarh Fort. Both structures have such distinct movement and offer a contemporary experience when there. Jantar Mantar was completed in 1734, and construction for Nahargarh Fort began that same year.

Is there a moment from the past 10 years that’s been particularly rewarding?

I would have to say our growth in employing more weavers. It’s amazing to see the progress and the new projects we’re currently implementing to support the weavers. The relationships we have made within that community are really humbling. We recently attended the wedding of our production manger, and it was an honor to be a part of it. 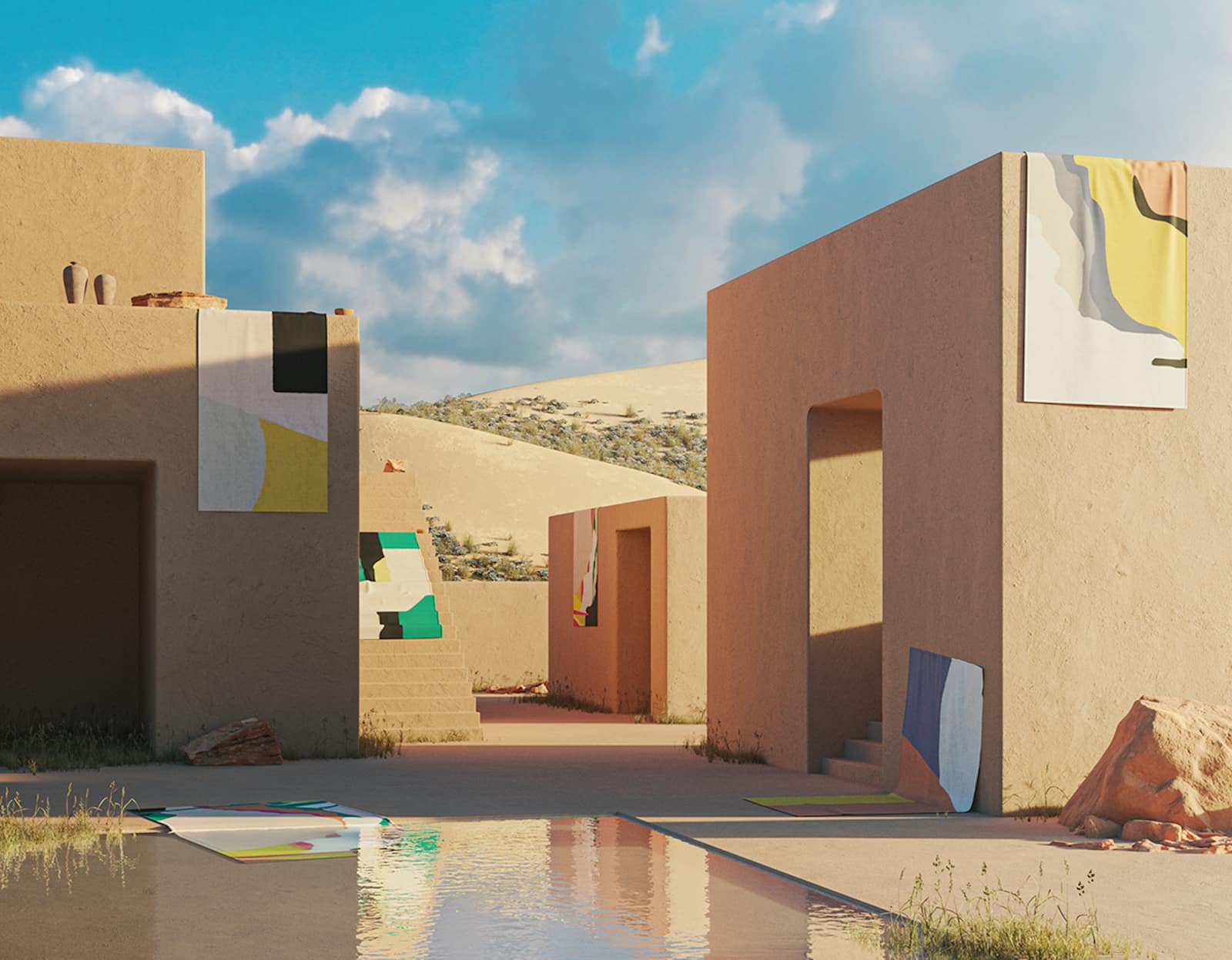