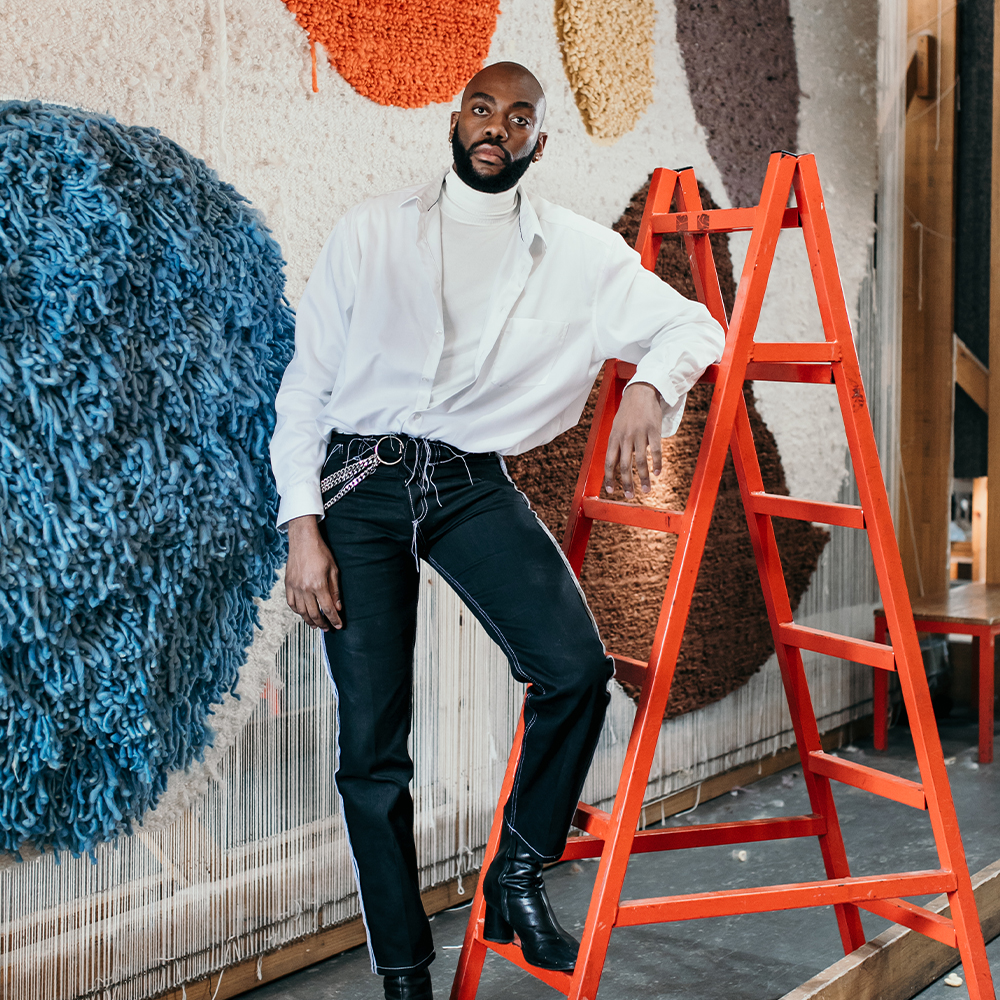 December 19, 2021Johannesburg-born designer Rich Mnisi says that he and his whole family suffer from ophidiophobia, the fear of snakes. He confronts this anxiety head-on in his new contemporary-furniture exhibition at Southern Guild, which is teeming with serpents.

A black acrylic snake slithers along the white walls of the Cape Town gallery, leaping across dividing walls and disappearing into space. Its spiraling tail appears again shooting out from a console. But the head seems to have vanished, until one lifts the beaded drapery hanging from a curved bronze shelf. Then, its hissing face appears, eyes glistening.

A brass serpent swirls overhead in the form of a chandelier; sinuous black lines figure into the frame of a mountainous sofa and a bulbous fun-house mirror. Nyoka, the word for snake in Tsonga, Mnisi’s native language, is also the title of this, his first solo furniture design show, on view at Southern Guild until February 4.

The unifying concept for the new works came from a nightmare his mother once shared with him. “She dreamt of a snake slithering up her back, and she looked back and saw it,” he tells Introspective. “I found it beautiful that she wanted to look back and engage with it. I thought of the idea of duality — which is something that I play with a lot — something positive that might come from pain and loss. That was something I wanted to celebrate.”

Mnisi is a rising star in the world of South African design. He’s best known for his fashion brand, OATH Studio, which he founded in 2015 at age 23, almost immediately after graduating from the School of Fashion (formerly LISOF) in Pretoria. By then, he’d already been named Africa Fashion International Young Designer of the Year for 2014.

Aficionados of his work include Beyoncé, who wore his Rhundzu blouse and crocodile half-pleat skirt to a Global Citizen concert in South Africa, and American singer Ciara, who danced in the streets of Soweto in her 2018 “Freak Me” music video wearing Mnisi’s zebra-print gown, with backup dancers also clad in couture by Mnisi.

In 2019, he was named to the Forbes Africa 30 under 30 list. And his work was featured in the Zeitz MOCAA 2018–19 exhibition “21 Years: Making Histories with South African Fashion Week.”

With products that sell for around $4,000 — some of them controversial, like micro-miniskirts for men and his Xibelani wool skirt, a modernized traditional Tsonga skirt — he has built an international social-media following that tracks his every creation. His colorful fashion shoots, expressions of his queer identity, African heritage and embrace of pop culture, are featured on two Instagram feeds, @rich_mnisi and @therichmnisi, which boast 169,000 and 137,000 followers, respectively.

This extraordinary publicity machine makes the brand appear to be worldwide already, but Mnisi, speaking via video chat, is sober about the gap between the surface semblance of success and its reality.

“When I was in college and interning for different brands, I saw the dangers of being overexposed and giving in to that exposure,” he says. “I want to make sure that I know what I’m saying and that the brand is working locally before I start knocking on other doors. You have to be very prepared for that journey. From a media perspective, we’re already very global. But it’s our 2022 plan to explore other markets aggressively.”

Part of growing globally is being recognized beyond the world of fashion, as a creative artist in a broader sense. In 2018, Southern Guild cofounders Trevyn and Julian McGowan invited Mnisi to try to “play around with furniture,” as he puts it. At first, Mnisi found working in this completely new realm intimidating, but he was encouraged by the gallery’s commitment to him.

“I didn’t even know what went into making a couch,” he says. “The easiest way for me to think about it was to think about the human form, which made it almost like designing clothes. That made it so much simpler and so much easier. I was creating more garments, but these garments were static and for other uses.”

One of his earliest creations, featured in a 2019 group show at Southern Guild, was a deep navy-blue leather chaise longue that echoed the form of a reclining figure with outstretched arms. He named the piece after his late great-grandmother Nwa-Mulamula. When conceiving it, Mnisi imagined himself as a child “being embraced by my great-grandmother.”

“I never met her. There are no photographs of her, and my family isn’t even sure when she was born. It’s all very vague. But because she was such a significant figure to my mother and because my eldest sister was named after her, I felt the need to further speak her alive,” he explains, using an expression that translates roughly as “bring her back to life” in North American English.

To accompany the sofa, Mnisi made Nwa-Mulamula’s Tears, a teardrop-shaped leather and bronze ottoman, as well as two leather chairs. His anthropomorphic impulse continued with Alkebulan I and Alkebulan II (references to the original name for Africa), two leather chaises shaped like bodies lying in fetal position.

For “Nyoka,” the McGowans encouraged Mnisi to extend his design vocabulary. He responded with more original seating, the console, the mirror and an enormous rug. The gallerists also helped connect Mnisi with local artisans who could fabricate the works.

The Nyoka console was a collaboration with the nonprofit MonkeyBiz, which employs craftswomen from South African townships to produce fine beadwork. The serpentine Vutlhari (Wisdom) chandelier was a partnership with Cape Town foundry and design studio Bronze Age.

Central to “Nyoka” is Nwa’Ntlhohe (Pure Beauty), an extraordinary 16-foot-long carpet dotted with colorful plush pile and shaggy tufts. The rug is made from hand-spun Karakul wool and mohair sourced in South Africa and woven by female artisans from local carpet studio Coral & Hive.

“Rich’s work is about expression and queerness and Tsonga heritage,” says, Lindsey Raymond, Southern Guild’s gallery director, who believes Mnisi’s designs will go down in history.

“These are very glamorous, luxurious, unique pieces, and we’ve placed some in private collections, but we’re also pushing for museum acquisitions,” she says. “I struggle to call them furniture. They’re artworks.”