In the Photos of Juergen Teller, Luxury Bags Are Psychosexual Objects 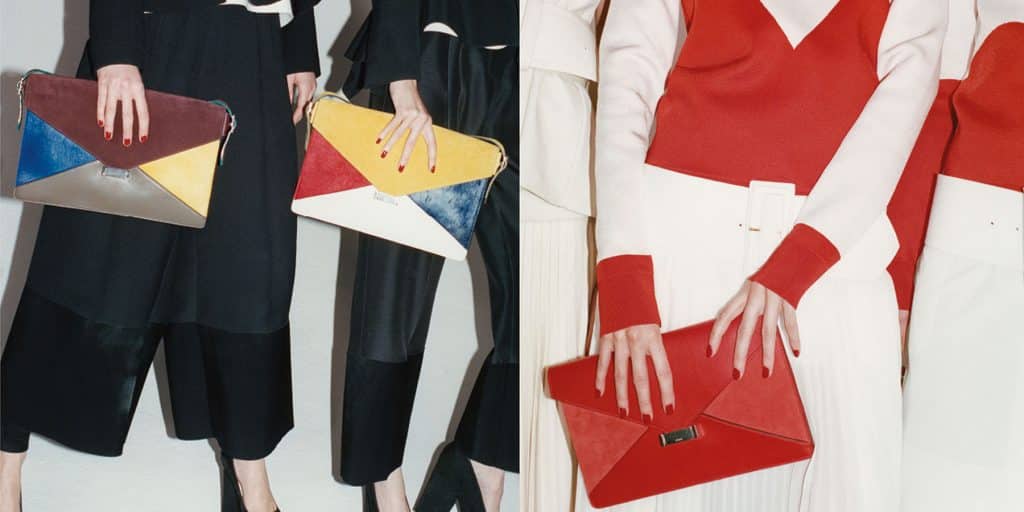 A noted fashion journalist and style icon examines the superstar photographer's images of items that, seen through his lens, are much more than mere accessories.

September 1, 2019Over the last few decades, the photographer Juergen Teller’s “amateur look” ads for Louis Vuitton, Marc Jacobs, Valentino and Celine — his pictures are often overexposed, his models imperfect — helped build these luxury brands into the global powerhouses they are today. They also helped turn the prolific Teller into a superstar. Even though the merchandise that Teller’s work promoted was inherently temporal, his photographs are not. Removed from their original commercial context and viewed now from a slight chronological distance, his images, especially when seen in aggregate, have taken on more aesthetic and psychological dimensions. 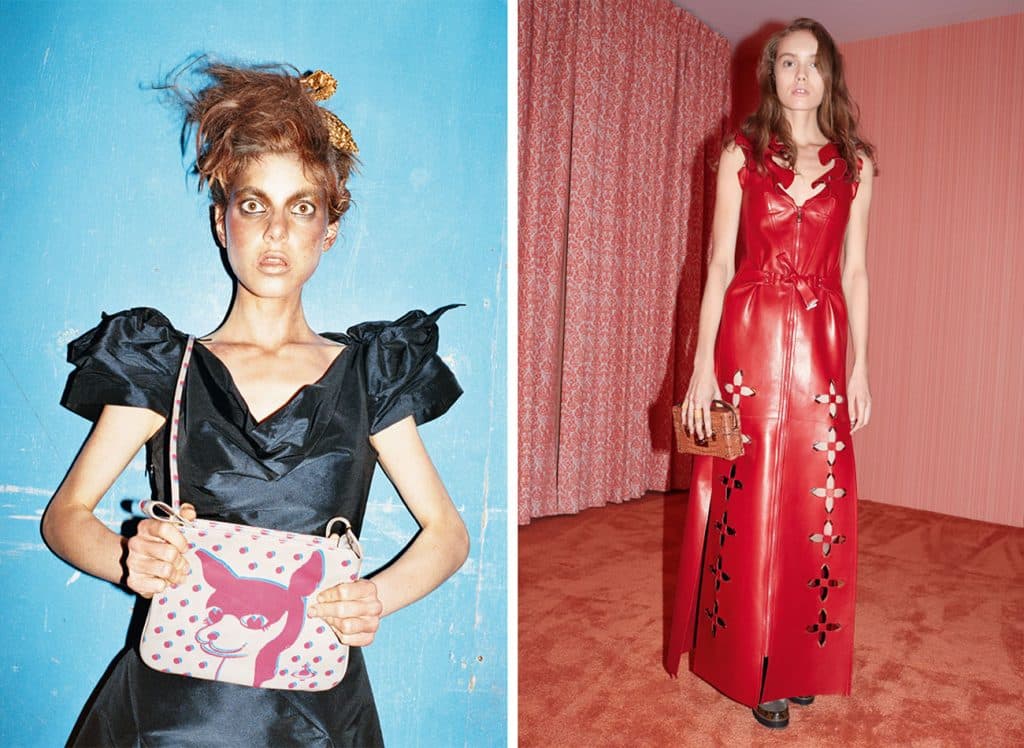 While flipping through the 600-plus pages of Juergen Teller Handbags (Steidl), a monolithic homage to the ubiquitous accessory, I recalled, for instance, the first pocketbook I ever owned. Child-size and fabricated from shiny white raffia, it was a gift from a relative. This bag held no interest for me, so I stashed it away in a desk drawer. But gradually, the diminutive receptacle took on a special function.

Whenever I went to the store with my mother, she gave me coins for the bubble-gum machines that in those days dispensed not only chewable treats but also little charms. There were molded plastic poodles, miniature shoes, midget cereal boxes, tiny baby dolls and thumbnail-size books. I deposited these treasures inside the raffia purse, every now and then removing it from the drawer to examine its growing contents.

For me, a handbag is still foremost a personal item whose function is to secrete private, essential objects. Handbags are to New Yorkers what cars are to Los Angelenos. Just like automobiles, handbags from the outside transmit messages about taste, aspiration and personality. (Teller in one photo makes an implicit comparison between a gleaming DeLorean and the sleek Louis Vuitton bag perched on it.) But inside, they are private spaces, sealed off from the rest of the world, containing the necessities for getting from point A to point B.

I cannot understand the recurrent vogue for transparent bags (Teller shows a crystal-clear Valentino example). Would anyone want to drive in a see-through car? I don’t wish to share the contents of my handbag, any more than the contents of my mind, with curious onlookers, and I am not able to keep the interior of my bags presentable enough for public view anyway. It’s bad enough to watch your purse pass through the airport X-ray system — more invasive to my mind than standing, arms raised, for a body-scanner machine. 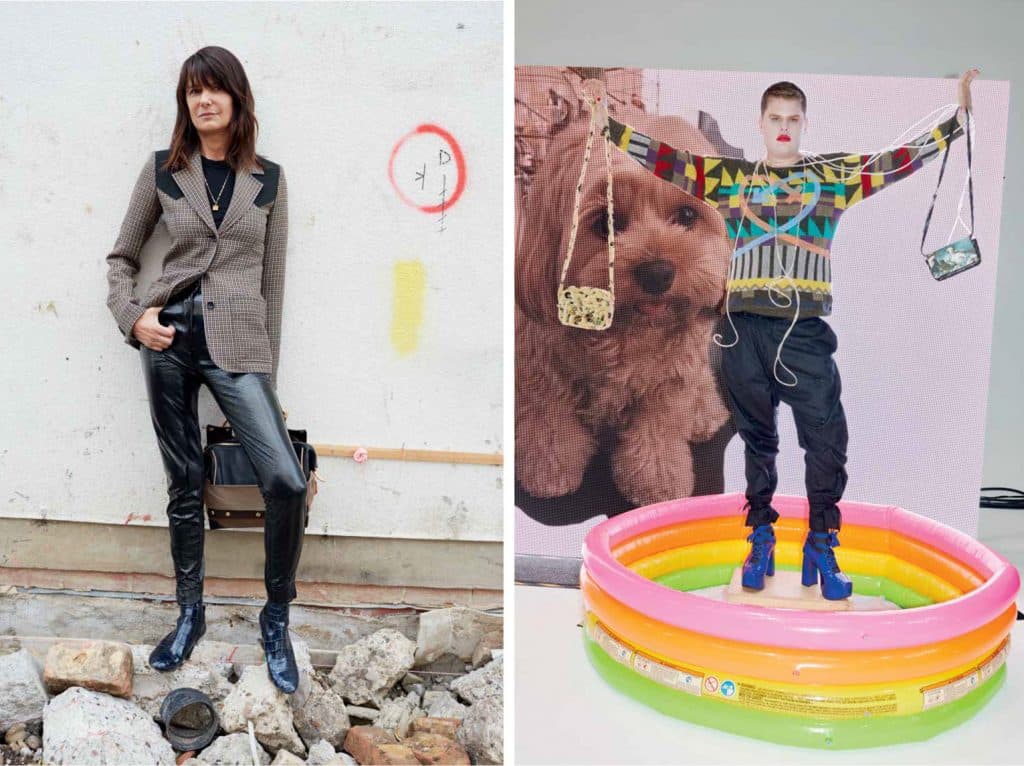 It is equally unpleasant to have a stranger rifle through your handbag. Surrendering my purse to a museum security guard so that he can poke his stick into it makes me wince. Surely, there is a psychological explanation for why such unwelcome intrusions feel almost like bodily violations. If the high-heeled shoe has phallic connotations (see, for example, the penis-heeled booties Lady Gaga wore for her 2011 appearance on American Idol), then perhaps the bag has vaginal ones. 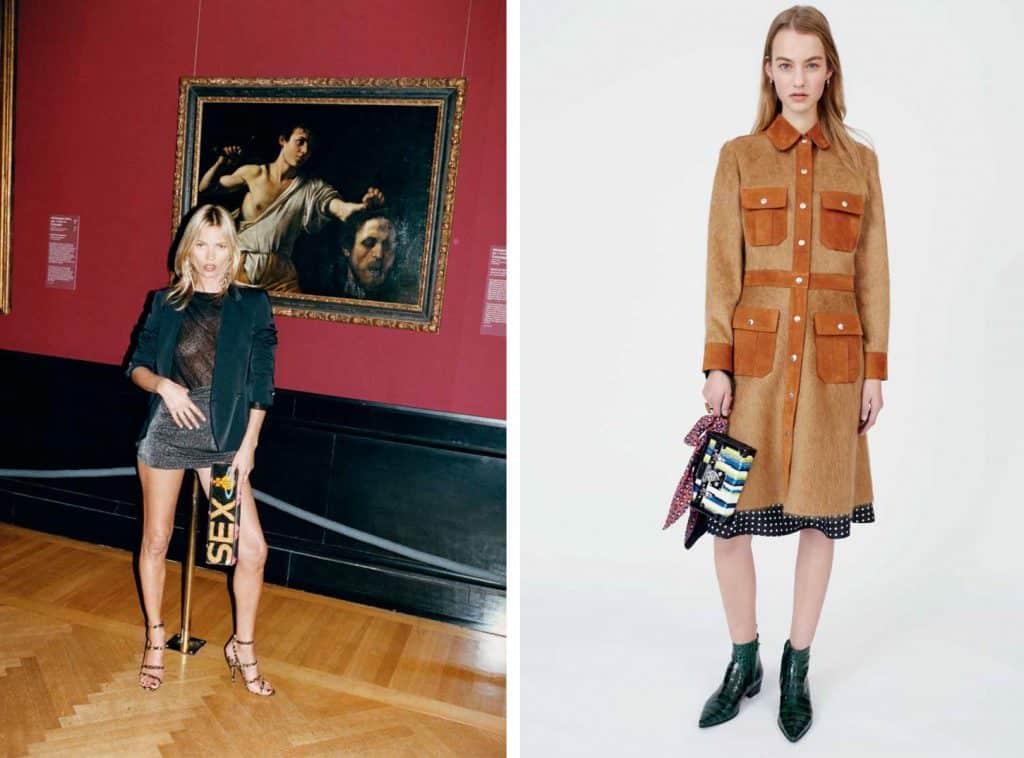 Many of Teller’s photos seem to support this Freudian analogy of the handbag with female genitals. The default pose of Teller’s models is spread-eagle, with a purse (whether hairy, furry, bejeweled or smooth) grasped at crotch level. One nude woman even presents her wide-open bag on the proverbial silver platter, strategically placed on her bare lap.

Another photo, showing Kate Moss inside a museum, makes the statement even more blatantly. Assuming a wide stance, Moss dangles a Vivienne Westwood, clutch, emblazoned with the word SEX, between her thighs. (She and the bag are provocatively juxtaposed with Caravaggio’s decapitation scene David with the Head of Goliath.) 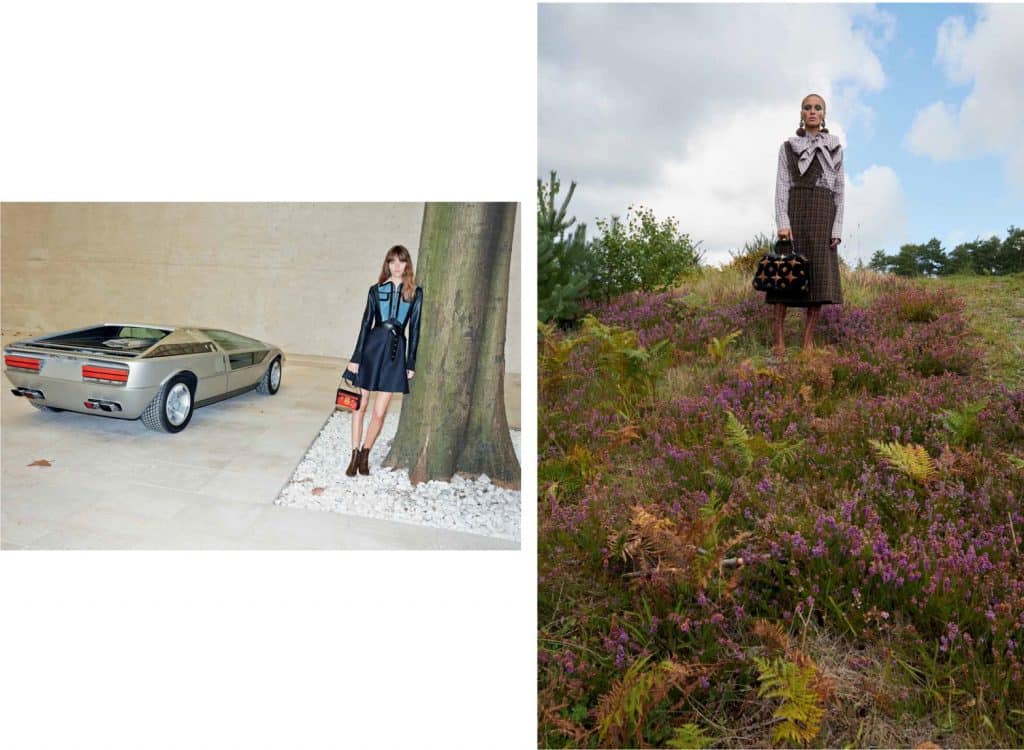 But for Teller, the handbag can stand in for more than just one part of the female anatomy. It can subsume nearly the whole female physique, as in the photo of Victoria Beckham swallowed up by an enormous shopping bag from which only her splayed legs emerge. Sometimes the female is entirely absent from a picture and is symbolized by a satchel alone, abandoned on a chair. This idea of bag as synecdoche evokes Van Gogh’s celebrated still-life-as-self-portrait, Van Gogh’s Chair, in which the artist’s tobacco pouch, left on a rustic seat, emblematizes the unseen painter. 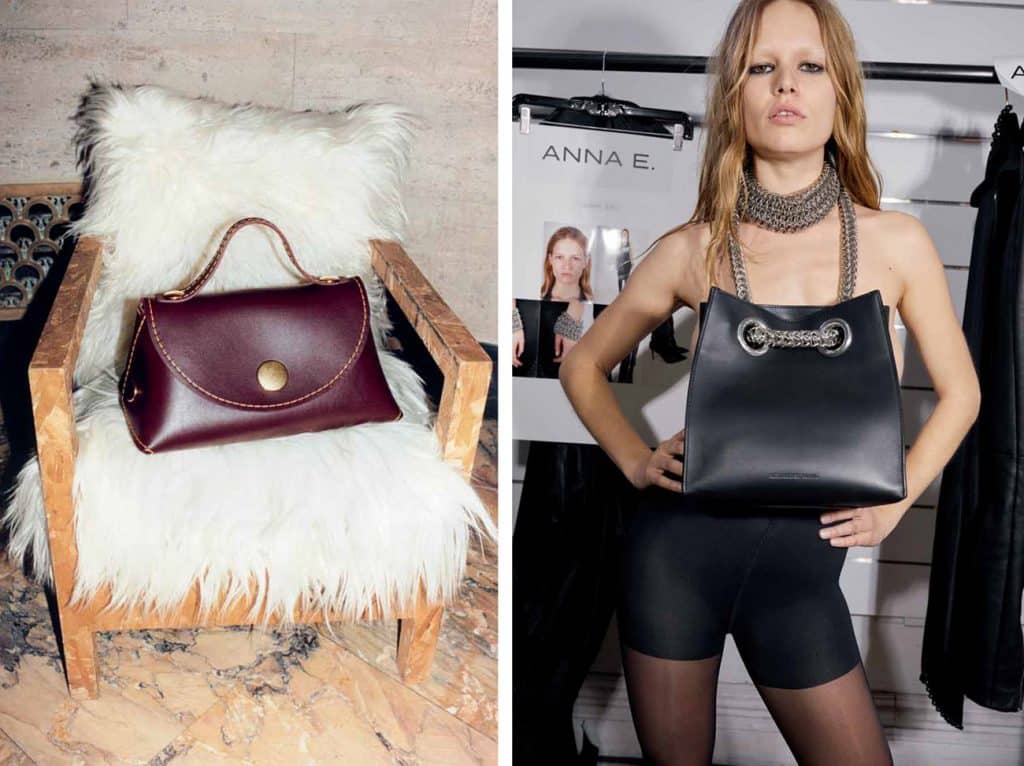 In spite of all his associations of the handbag with women, Teller’s work also fully embraces gender fluidity in fashion and the mainstreaming of the purse as unisex accessory. In one instance, an otherwise conventionally attired man carries a supersize, gender-neutral Bottega Veneta Cabat tote, and in another image, a more gender-fluid model (standing in a child’s colorful inflatable pool) lifts a pair of dainty crossbodies, one in each manicured hand. Teller is inclusive not only about gender but also about age — children (the very young Dakota Fanning) are represented, as are mature women proudly displaying their silver hair and lined skin along with their handbags.

In his very brief introductory statement, Teller notes how, in the course of his 30-year career, “slowly . . . handbags started creeping into my pictures” — hardly an accident, given the simultaneous arrival of the It bag as status accessory and the concomitant profit bonanzas reaped by luxury brands.

Teller, in his succinct essay, also poses a crucial rhetorical question: “Why does the world need so many handbags?” If, as Freud noted long ago, “half of humanity . . . are clothes fetishists,” then at least half of us must be bag fetishists, too. 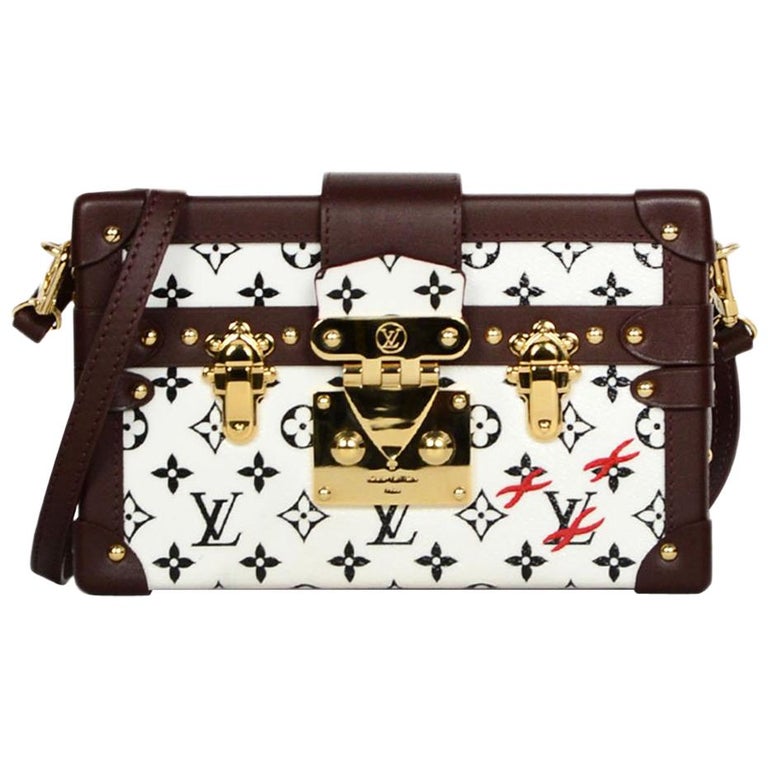 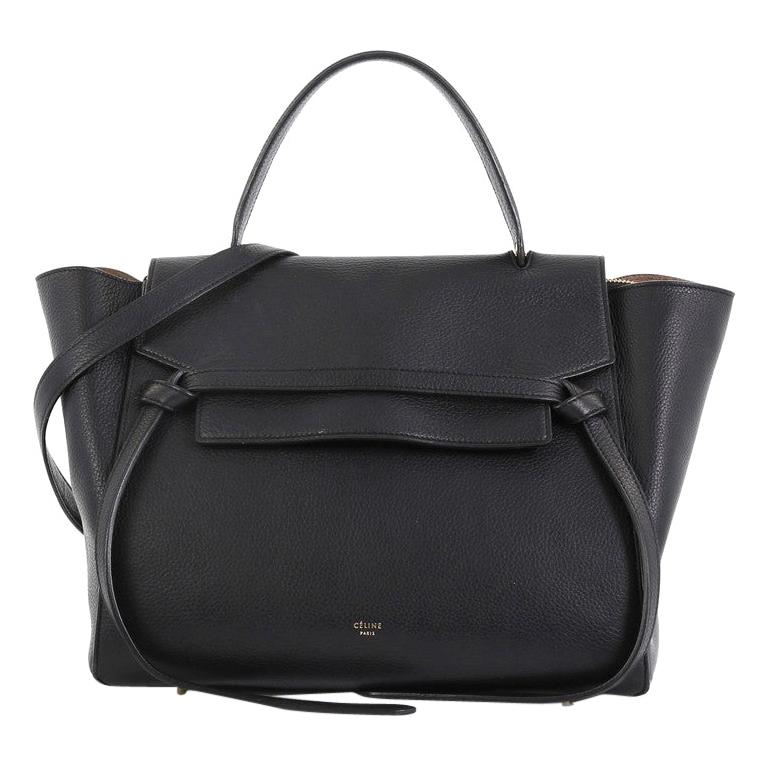 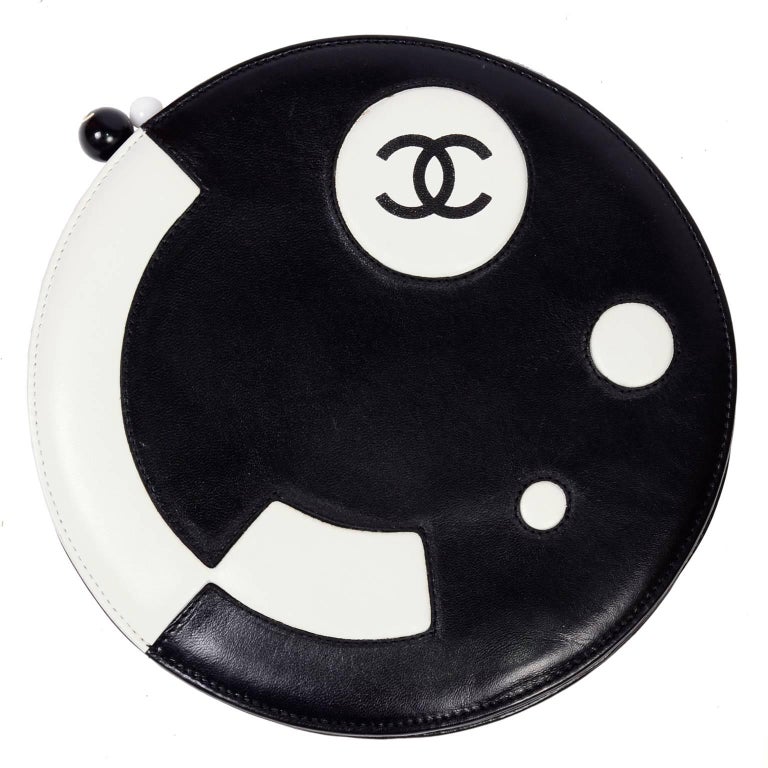 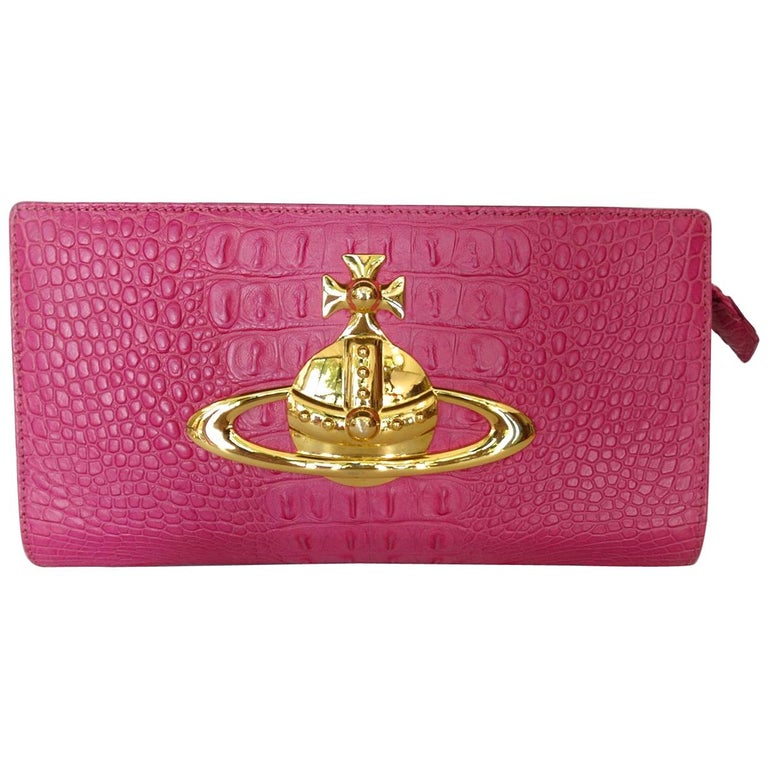 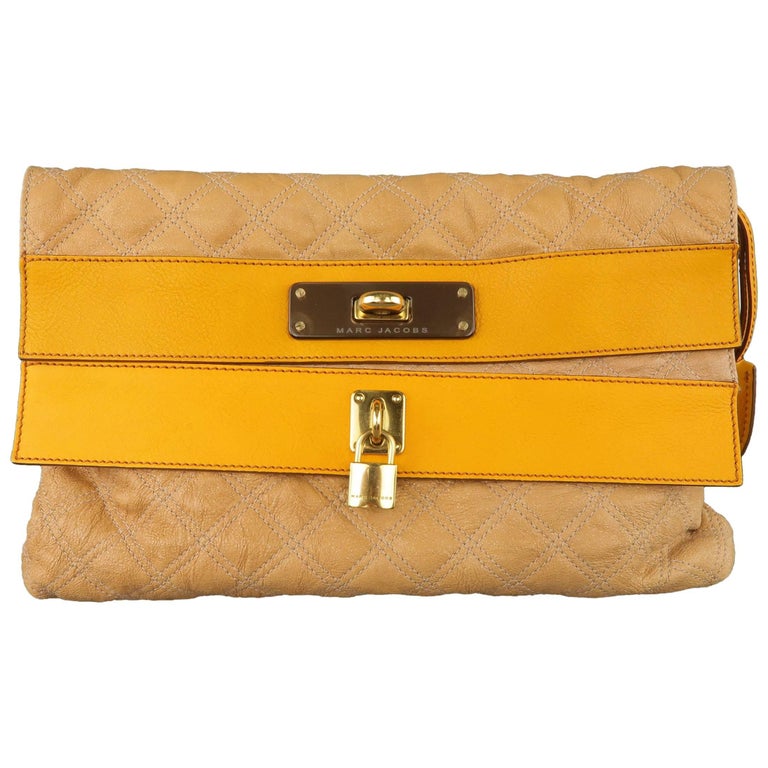 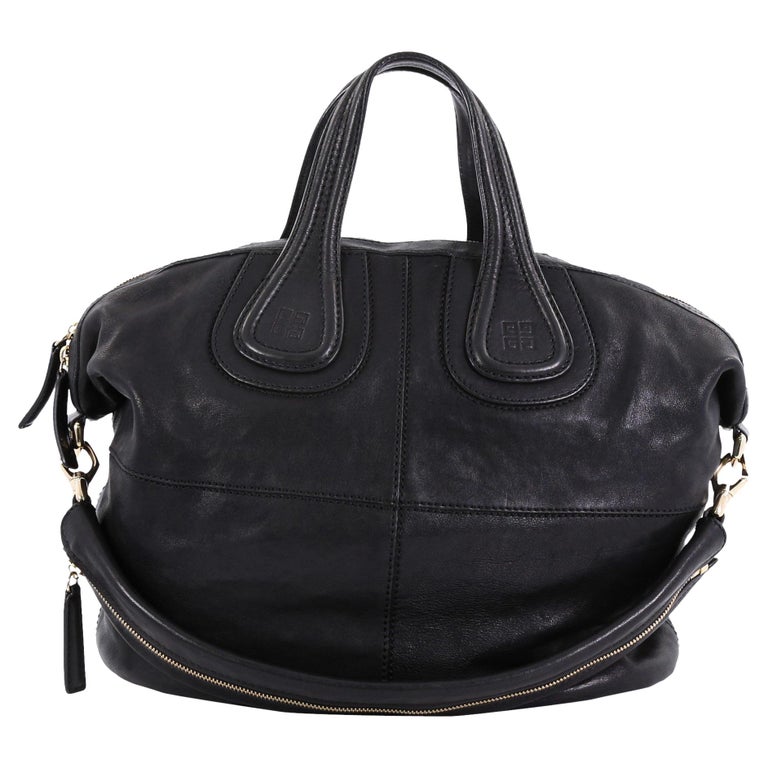