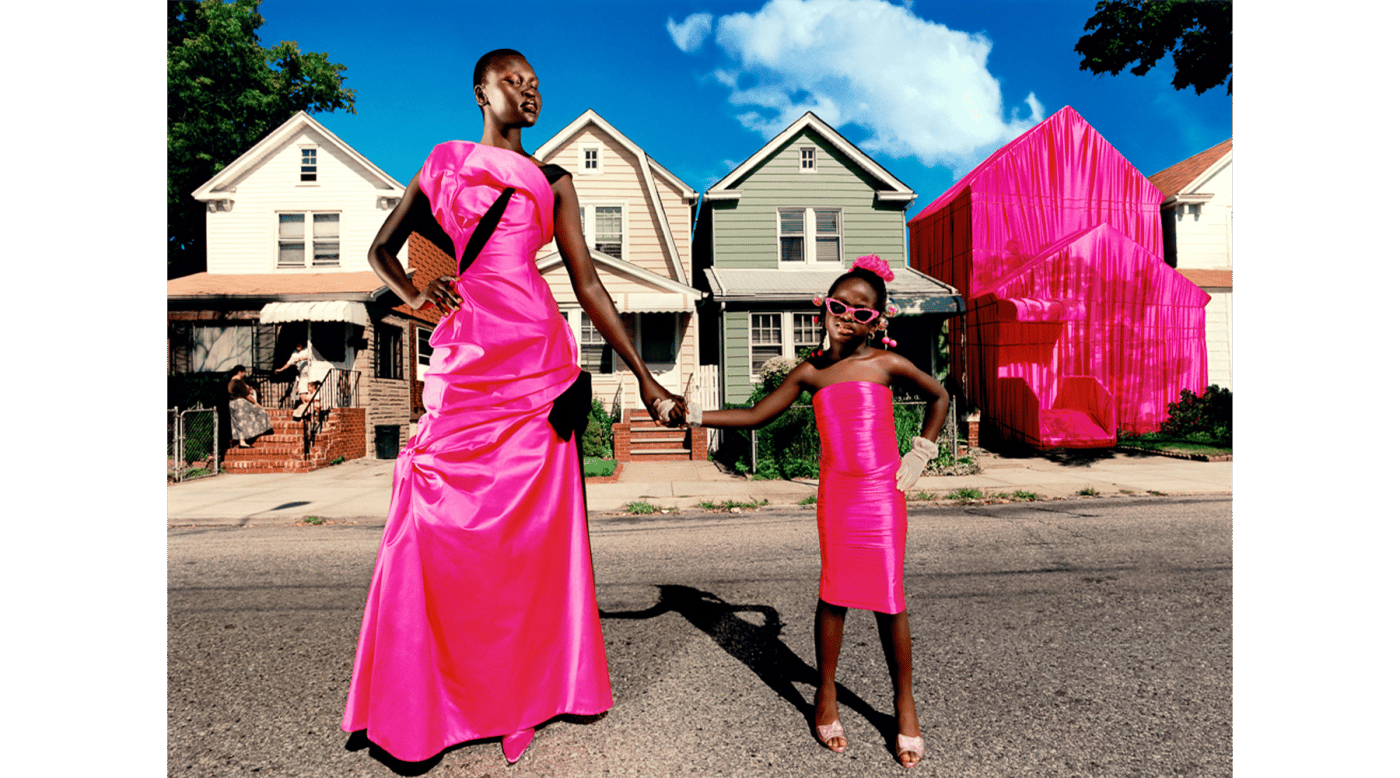 The Manhattan branch of the Stockholm photography museum has devoted its entire space to the artist's high-gloss, high-impact — and surprisingly political — works.

December 4, 2022In the late 1990s and early 2000s, a glitzy, over-the-top sensuality exploded across American pop culture. At the center of it was photographer David LaChapelle.

With his eye for spectacular image making, his wild imagination and his fearless disregard for taboos, he gave celebrities an exuberant and daring new edginess, casting stars and supermodels in hedonistic dramas that played out in the pages of glossy magazines.

The influential photographer is credited with all kinds of pop culture firsts. He linked hip-hop with high fashion, painting Louis Vuitton logos all over rapper Lil Kim’s naked body for Luxury Item (1999). He catapulted Paris Hilton into households via the pages of Vanity Fair in 2000.  And he brought us our first glimpse of a Lolita-esque Britney Spears, in Rolling Stone in 1999.

Dozens of celebrities — from Pamela Anderson, Naomi Campbell and Kim Kardashian to Eminem and Tupac Shakur — posed for him in the nude (or close to it) in meticulously staged images. To be photographed by LaChapelle was a rite of passage for many stars.

But LaChapelle’s role as celebrity image maker is only half the story, as we see in “Make Believe,” his first major retrospective in the U.S., on view at Fotografiska New York through January 8, 2023.

LaChapelle organized the show in collaboration with the curatorial staff of the Stockholm-based photography museum, which opened this Manhattan outpost three years ago. Displaying more than 150 works dating from 1984 to 2022, “Make Believe” is the first exhibition to take up the entirety of the 1894 historical landmark on Park Avenue South that houses Fotografiska.

Alongside some of his most notorious commercial images (and videos), we see his large body of personal works — photographs he has produced since ditching the Hollywood and Madison Avenue rat race in 2006 and relocating to rural Maui, where he still lives.

What’s most striking here is that there is no clear-cut distinction between his commercial work and his fine art, aside from the latter’s lack of celebrities. When he left commercial photography, the big-budget editorial spreads and ad campaigns gave way to massive tableaux requiring no less work. He still designs and creates sets, casts models and choreographs all those (often nude) bodies, later finessing the technical aspects of the production process.

LaChapelle has long been known for hand coloring negatives and other analog tricks of the trade. “I think there is far less digital manipulation than one might assume,” says George Kocis, director of New York’s Staley-Wise Gallery, which has represented the artist since the mid-1990s. “I don’t think he wants to reveal how he constructs every picture, but I’ve heard from people that they are like films — that much work.”

What’s also apparent in the show is that, from his earliest days with a camera, LaChapelle has been fascinated by one main theme: mortality. It weaves its way into nearly every image, from the fleeting beauty of his celebrities and the apocalyptic scenes of consumerism and greed gone awry to his fixation on religious imagery and his environmental activism, represented most conspicuously by his series of glowing gas stations in the Hawaiian jungle.

There is far more social critique here than one might expect, although it’s not entirely surprising given his track record.

In a famous Diesel ad from 1995 — created in response to then-President Bill Clinton’s don’t-ask-don’t-tell policy prohibiting LGBTQ+ U.S. military members from being open about who they were — LaChapelle, who is gay, reimagined the iconic VJ-Day kiss photograph with two male sailors kissing. It was one of the first times a major brand showed homosexuality in an ad campaign.

Even more daring is his insertion of religion into the pop culture discourse in the service of social justice.

In 2003’s “Jesus Is My Homeboy,” created as a fashion spread for the magazine i-D, he positioned the Son of God as a man of the people in a series of gritty urban scenes, including a Last Supper.

“If Jesus returned,” LaChapelle notes in the exhibition’s audioguide, “he’d probably be hanging out with the same people he hung out with the first time, which were the oppressed, the marginalized and those on the outskirts of society. Definitely not the politicians and aristocrats.”

In his 2019 Annunciation, depicting the scene in which Gabriel announces to Mary that she’ll give birth to Jesus, the Virgin is Black.

“At first glance it’s the colors, and the glamour, and the over-inflatedness of his images that comes across, but in fact, he’s extremely barbed and making a lot of social commentary. He’s really got a gimlet eye,” says Kocis.

That other artist with the gimlet eye who fixated on celebrity and religion — Andy Warhol — is never far away here.

LaChapelle’s introduction to the Pop art giant was on an elementary-school field trip to a museum, where he saw a Warhol Marilyn. He later cast his friend Amanda Lepore, a transgender icon, as MarilyN Monroe and Elizabeth Taylor in his own Warhol-style works.

But that’s not the only way the two artists’ careers connected. When LaChapelle arrived in New York at age 15 as a high-school runaway from suburban Connecticut, where he was bullied for being gay, he got a job busing tables at Studio 54. A few years later, Warhol happened upon LaChapelle’s photography in a show at the then-nascent 303 Gallery and invited him to work for Interview magazine. LaChapelle went on to become the last person to take a portrait of Warhol, in 1986, posing him in front of a shelf of Holy Bibles.

Like Warhol, LaChapelle was deeply affected by the AIDS epidemic and by his Catholic upbringing.

“I just have always felt compelled, since I was very young, to explore these ideas of Heaven and the Holy Family,” he says in the audioguide. “When my friends were dying of AIDS, I wondered, ‘Where, where were their souls going?’ We were using art and creating and creativity to save ourselves.”

For the series “After the Deluge” (2006–09) — whose images look like stills from epic theater productions — LaChapelle took inspiration from Michelangelo’s frescoes in the Sistine Chapel in Rome. Naked figures struggle to survive as immense floods destroy a variety of built environments, including a cathedral, a contemporary-art museum and Caesars Palace on the Las Vegas Strip.

Even with destruction and darkness simmering beneath his seductive images, LaChapelle always seems to leave room for optimism. “I set it in Las Vegas, in Sin City, and in this depiction, everyone’s helping each other,” he says. “There aren’t people fighting. It’s humanity at its best.”

Browse work by David LaChapelle on 1stDibs
Shop All