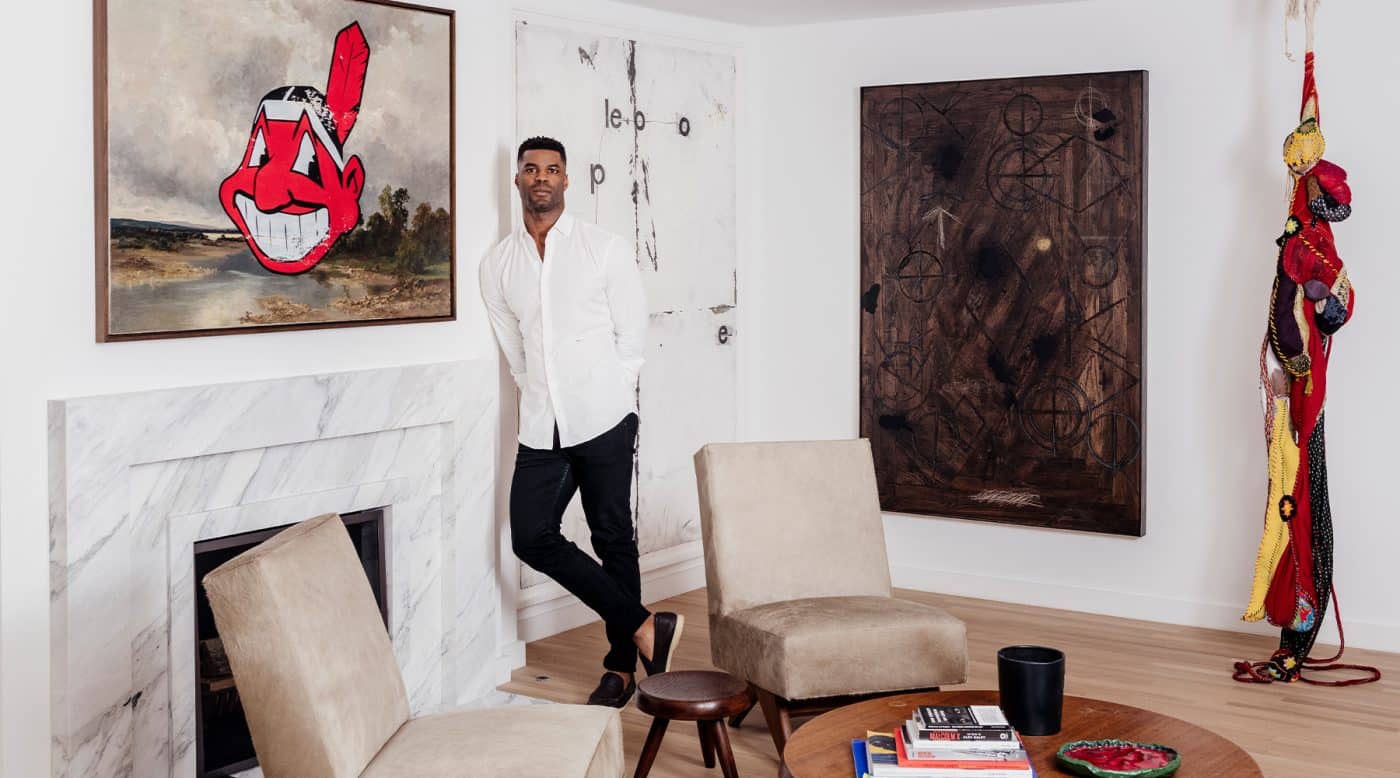 November 7, 2021“Art Basel is like the Superbowl of art,” says contemporary-art collector Keith Rivers, who knows a thing or two about football. Rivers, a top-10 draft pick in 2008 for the Cincinnati Bengals, played linebacker for the Buffalo Bills and the New York Giants. He bought his first artwork — a Warhol Electric Chair print — long before he hung up his cleats in 2015. But it wasn’t until he attended Basel, the annual Swiss über art fair, in 2017 that he decided to start collecting art seriously.

He says his adviser at the time told him, “Great collectors are made by getting ‘eye mileage’ from looking at a lot of art.” Following that dictum, he made it his goal to visit a different museum in every state as he carefully built his collection.

Rivers, 35, sits on the boards of several art institutions, including the Hirshhorn and Hammer museums. His dream, though, is to start his own private museum, “like the Barnes Collection,” but featuring the art of people of color.

An insatiable learner, Rivers spent the first 2020 COVID lockdown in Paris, having intended to add more hours to his eye mileage but instead getting stuck in a rented flat with a pile of art-history books and his laptop. Being in lockdown didn’t deter him from adding to his collection, however: He bought a long-desired Stanley Whitney color-block painting after seeing it in an online exhibition.

Here, the former NFLer tells Introspective how he became a major player in the art world, too.

What is your favorite way to look at and buy art: studio visits, the big fairs, regular gallery visits, secondary market? I know you do a lot of research. Can you describe more of your process?

I generally try to buy and support living artists. I go to New York regularly and see gallery exhibitions. I will go anywhere to see a show. I prefer museum shows because that’s where you are seeing what’s “important.” Podcasts like Modern Art Notes with Tyler Green dig in a little bit deeper.

If I find an artist I like, I go to their website and check out their press packs and read as many articles as I can and then ask the gallery questions. If you join a young members group, you can have access to curators and ask questions. I like looking at museum websites and trying to learn how they decide to collect.

You have works by some of my favorite artists, including Kerry James Marshall, Rashid Johnson and Barbara Kruger. How has your collection evolved since that first Warhol Electric Chair? I know you like to wait for “the right one.”

When I first started collecting, I wasn’t as serious as I am now. I got caught up in “zombie formalism” [collecting expensive art just because the market values it],  which meant I was buying more with my ears than with my eyes. Then, I realized I wasn’t doing my own thing. So, I put my time in and started really looking at art.

I look to create dialogues on my walls. There’s a John Edmonds photograph next to one by Wolfgang Tillmans. Glenn Ligon typically hangs next to Barbara Kruger, because they are text based and I read something about Ligon saying that Kruger had had an effect on him during his Whitney study program.

There’s also an interesting dialogue in how they use text in different ways. Ligon is a painter who uses text almost to the point of abstraction, while Kruger is more conceptual, using text as if it were an advertisement.

Your John Baldessaris seem very at home with your other examples of conceptual art, like the text-based works. What about Baldessari appeals to you?

Living in L.A., I was always attracted to his work. He is a funny artist. He demystifies art by putting dots on faces that make you look closer at the image and focus on things you might not normally. He has a quote: “What drives me is the insatiability to get something right.” And in football, you are always trying to have the perfect game. You never get there but are always trying.

I own two Baldessaris. I had been looking for years before I found the larger one. I was looking at it in London — it’s called Trial Dress and Sword, and it’s a color photograph with vinyl paint. I said, “I think this is the one” and bought it in 2015. This was a good example of his work, and when you collect, you want the really good example. And it shows a large portion of his practice. It all works together. I looked at it for a long time, and it felt right, like quintessential Baldessari.

What’s next on the wish list, and who do you have your eye on?

Etel Adnan. I love her work. I have had my eye on Kandis Williams, too. I did a studio visit with her and thought she was brilliant. I would love to buy another Warhol, because he influenced so many artists — consumerism and hero worship are still alive and well!