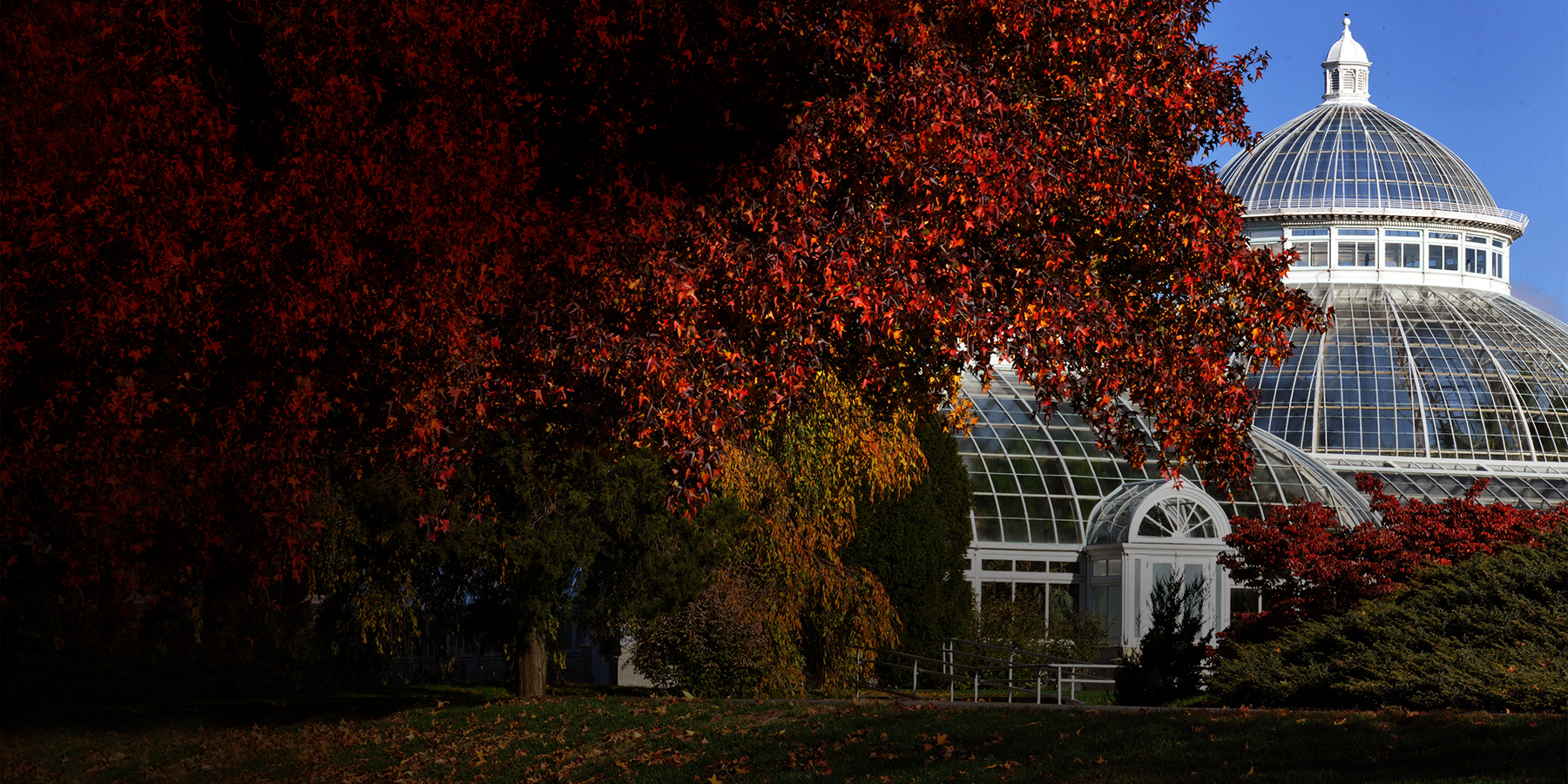 A love of photographing trees led a Manhattan attorney to compose a new book — and forge a new kind of romance — with his wife, an interior designer. 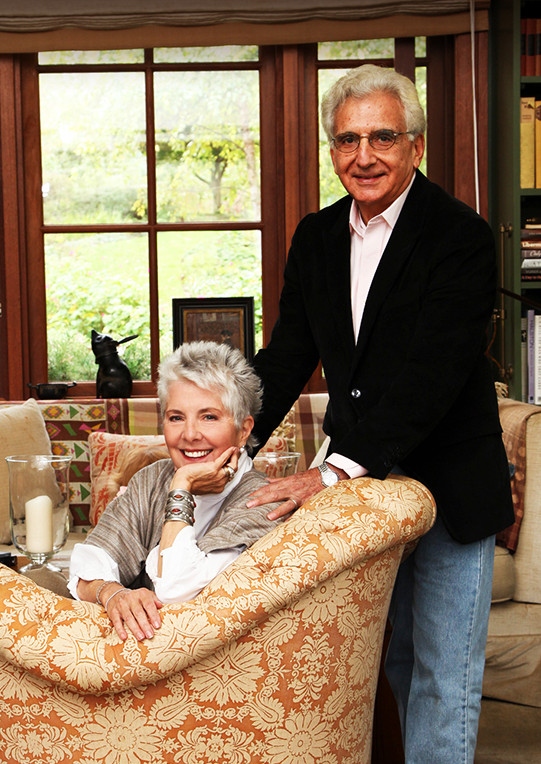 November 7, 2012Corporate lawyer Larry Lederman and Kitty Hawks, a noted interior designer, share a visual language rooted in nature — both in their own garden and the New York Botanical Garden, whose trees are the subject of Lederman’s new book. (Photo by Josh Gaddy) Top: A mature sweetgum partially shields the NYBG’s famed Enid A. Haupt Conservatory.

Like many in the habit of waking up early on weekdays, Larry Lederman found it devilishly hard to sleep in when Saturdays came around. About 11 years ago, the Manhattan attorney started showing up at the New York Botanical Garden at 7 a.m. on weekend mornings, where he’d snap pictures for a few hours, making it back to his home in Westchester County before lunch. New to photography, he carried a workhorse Nikon film camera and stuck to one subject: trees.

Turns out that was enough. Today, Lederman, counsel at Milbank, Tweed, Hadley & McCloy, is still busy exploring the beauty and mystery of trees, namely the 30,000 or so that live in the New York Botanical Garden, where he is on the board of advisors. It was the NYBG that had inspired his first outings with a camera, and no wonder; the 250-acre site was chosen in 1891 in part for its old-growth hemlock forest and ancient hardwoods. A year into his undertaking, Lederman switched to a digital Nikon single-lens reflex camera and kept on shooting. As his work matured, his prints expanded to the size of paintings, and an exhibition brought them to the attention of Gregory Long, the garden’s CEO and president. And a book project, Magnificent Trees of the New York Botanical Garden, was born.

The result, seven years later, is a compendium of more than 100 species scattered around the Garden, from a Chinese Scholar tree (Styphnolobium japonicum) in mid-bloom outside the library to a Mockernut hickory (Carya tomentosa) in full autumn dress near the iconic Enid A. Haupt Conservatory. Extended captions by plantsman Todd Forest, the NYBG’s vice president of horticulture and living collections, provide a history and genealogy for each entry. While the book may sound like an encyclopedia for arborists, it’s really more a cache of visual love letters — from Lederman to his leafy muses.

Lederman would be the first to admit he composed the images with the help of his wife, Kitty Hawks. An interior designer with an acute eye for color and pattern as well as a captivating personal style, Hawks serves on the boards of the Municipal Art Society and the Design Trust for Public Space. She looked at Lederman’s early work and pointed him to certain books in her art library, and it was she who suggested that the prints had to get bigger, much bigger, in order to accomplish what he was setting out to do. About five years ago, when the couple started spending more time at their 12-acre property in Westchester, they found that Lederman’s photographic work had given them a new and shared appreciation of their surroundings.

Hawks and Lederman chatted with Introspective about the new book and where it has taken them together. 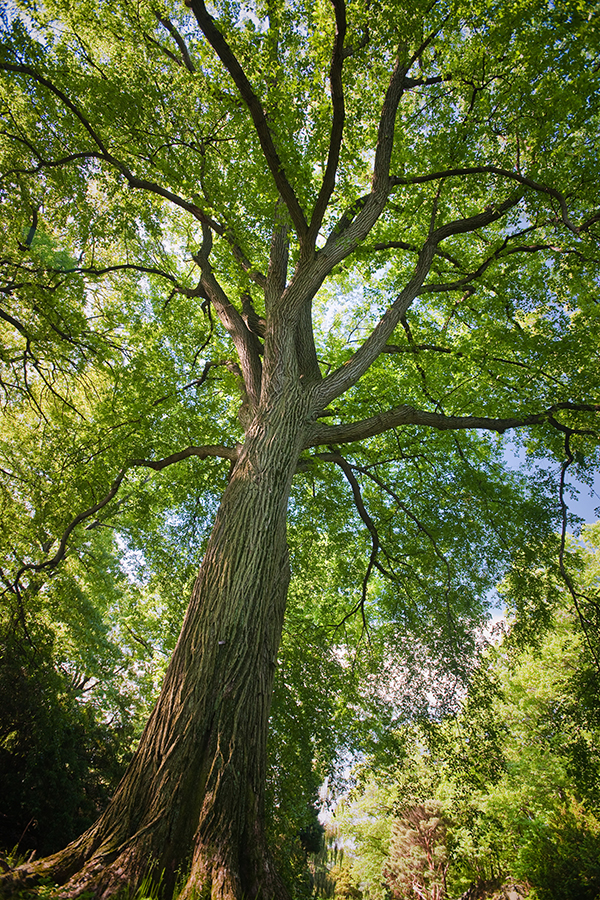 The garden’s largest American elm is a formidable presence in the Benenson Ornamental Conifers section.

KITTY HAWKS: Prior to Larry’s book, I’d gone to the Botanical Garden to see the bonsai show and the train show — but this gave me a new perspective. I don’t look at a landscape the same way I did before. I don’t look through trees or past them anymore. In Larry’s pictures the trees never have a sense of solitude, as when they are alone in the landscape. You are in them, like a bird. This was about the poetry and lyricism of the trees.

LARRY LEDERMAN: There are groves that I follow — they’ve become like friends. When we have bad weather or a storm, I think of them. And once you become aware of the trees, you become aware of the light. I could look out the window of my office downtown and know that the weather was changing because the light was changing. There are three or four major shifts each season, and I can tell immediately — everything’s changed, and I have to be out there. Unfortunately, I’m a hostile-takeover lawyer …

HAWKS: And he was held hostage! Larry won’t admit that he goes into a real withdrawal without his trees, but he does. He misses them. They have personalities.

LEDERMAN: There’s a whole side of me that’s developed through all this — an enormous emotional side.

HAWKS: When we first met, I was fascinated with how Larry’s mind worked — his perceptions about people, how they behaved, the process of doing a deal and how it evolved. But he didn’t have much of a visual sense. I was interesting to him because I knew something very different. Then he started taking pictures, looking at books, visiting museums. It’s created a second identity for him.

LEDERMAN: I’ll tell you the truth. Kitty’s basically responsible for my visual education. She has a brilliant critical eye. 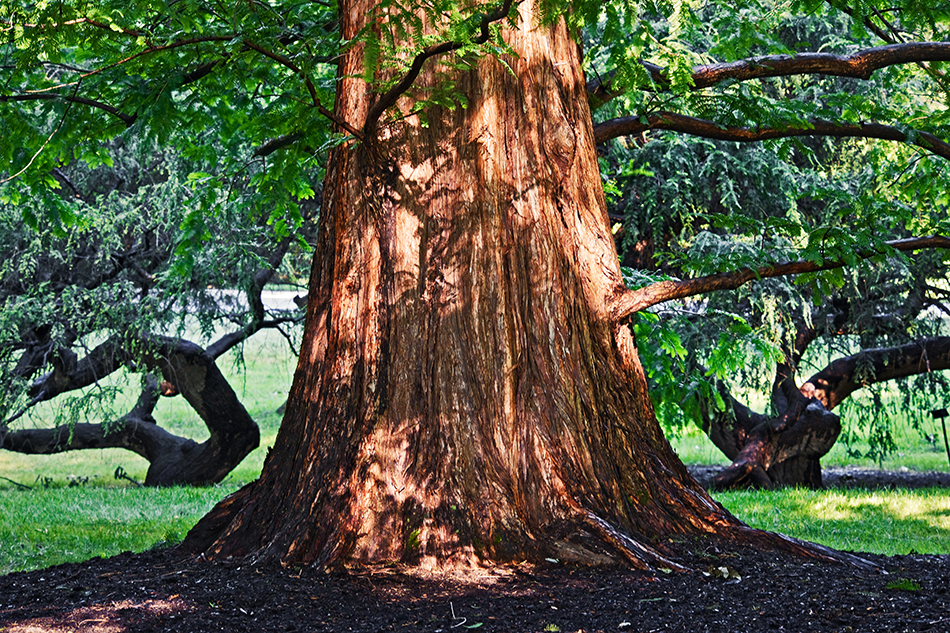 This dawn redwood was grown from seeds sown in 1948. 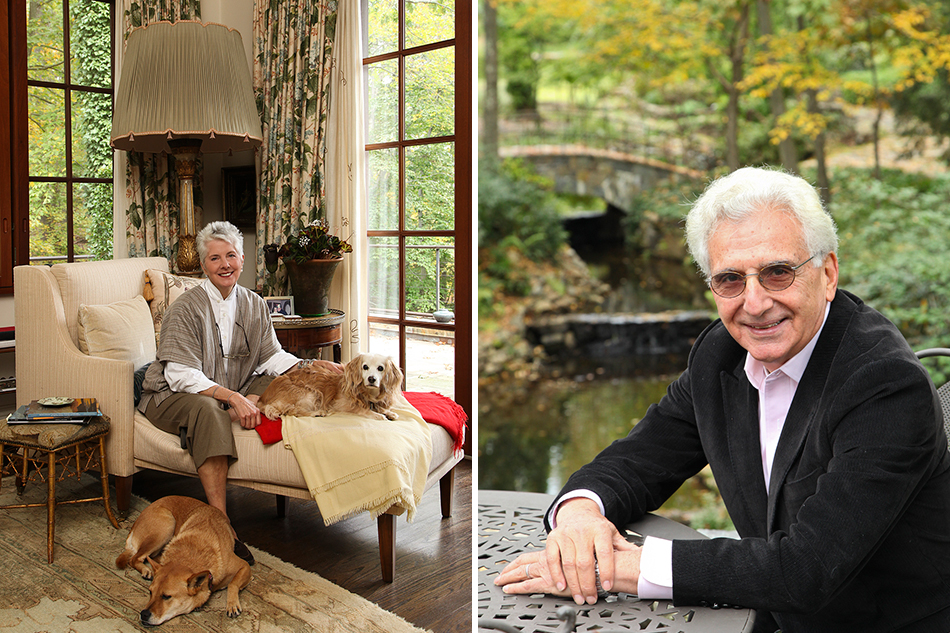 Left: Hawks in the Westchester County, New York home she decorated and shares with Lederman and their dogs Miss Lizard (left) and Bismo, affectionately known as Lizzie and Bizzie. Right: Of the distinctive landscapes he’s long documented at the New York Botanical Garden, Lederman, in his own garden, says: “There are groves that I follow — they’ve become like friends.” Portraits by Josh Gaddy 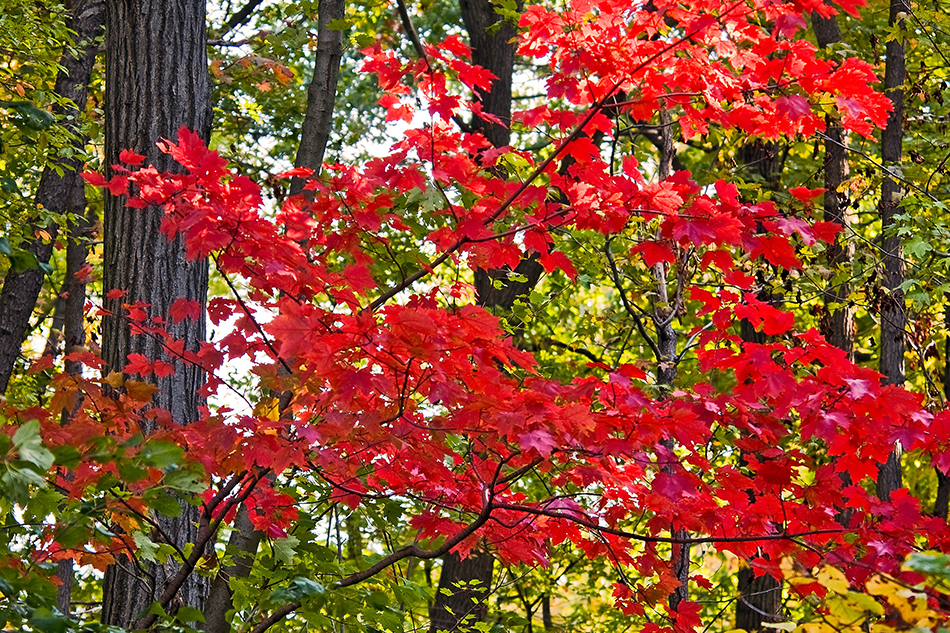 A red maple lives up to its name in early fall. 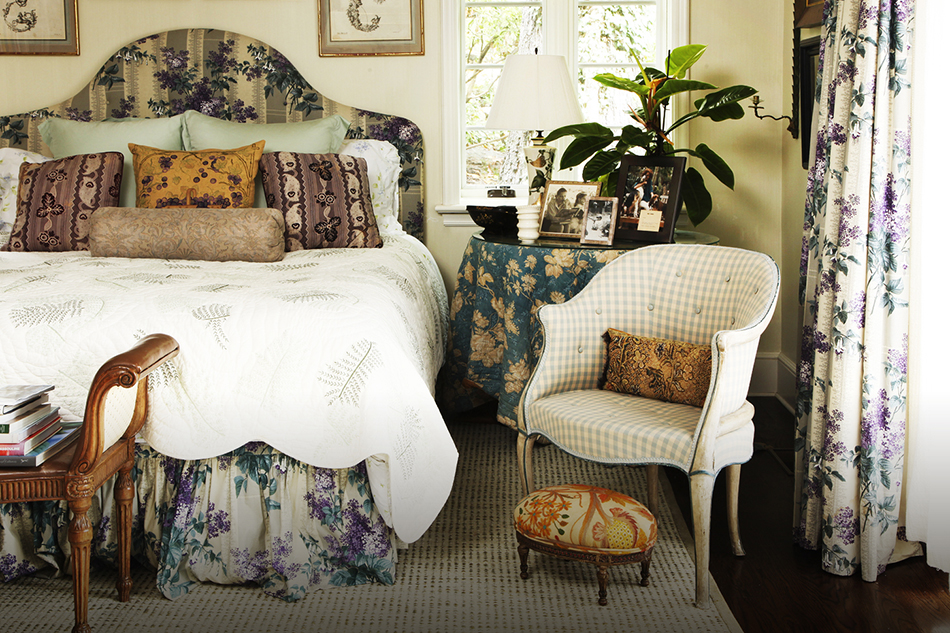 “Kitty’s basically responsible for my visual education,” says Lederman. “She has a brilliant critical eye.” That aesthetic is on full display in the couple’s bedroom. Photo by Josh Gaddy 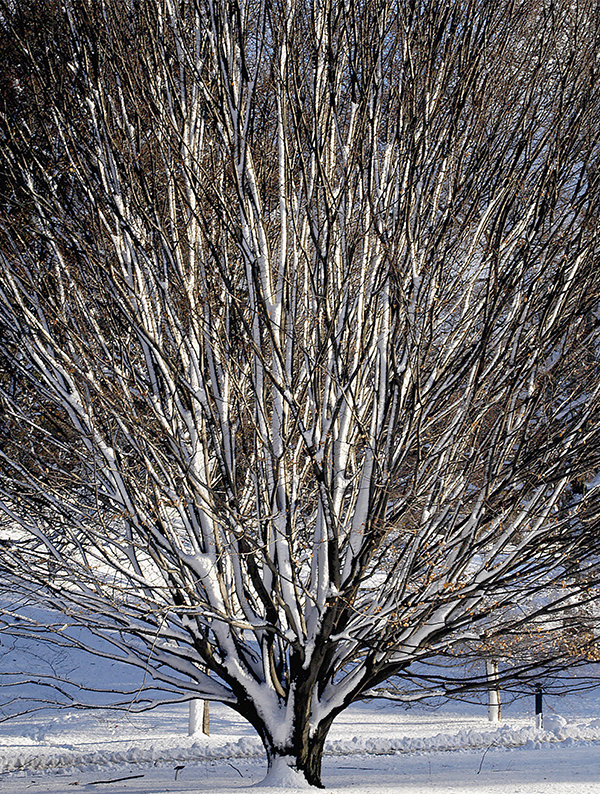 The architecture of the “Fastigiate” European hornbeam is best revealed in winter.

HAWKS: If a marriage is good, it develops each of you in ways that you wouldn’t expect. The change is a big surprise — and life enhancing. I was always envious of couples who cooked together. Until we had our house and garden in Westchester, we didn’t have that thing to share. And I didn’t have a role model for it in my family. Landscape design has given that to us. I had to learn a new language, and before long we had it in common. Now, we can go out at the end of every evening and survey what we’ve done.

LEDERMAN: I plot out how the land will work, then Kitty decides how the plants will work on it. We’re two people with different skills but engaged in the same thing — we’re like a Venn diagram.

HAWKS: I find it the most rewarding shepherding I’ve ever done. Once you’ve finished designing a house, it’s set. It doesn’t change of its own accord as a landscape does. The plants behave as they want to, and eventually you stop arguing with them — there’s an extraordinary sense of satisfaction in that. It takes years.

We’ve recently become friendly with Page Dickey, the gardener and author, and her husband, Bosco Schell. It’s wonderful to be around people who share the same passion. A lot of the friends we’ve made up here have that — more than in Manhattan, where the couples tend to be on separate paths. If you’re Tom Hayden and Jane Fonda and you come together around a political goal, that’s one kind of relationship. But it’s different when you come together around beauty.

LEDERMAN: We had a funny experience the other day. Kitty was hanging something, and I said, “It’s not centered.”

HAWKS: In a million years I didn’t expect him to say that. I’m going to have to go to law school.