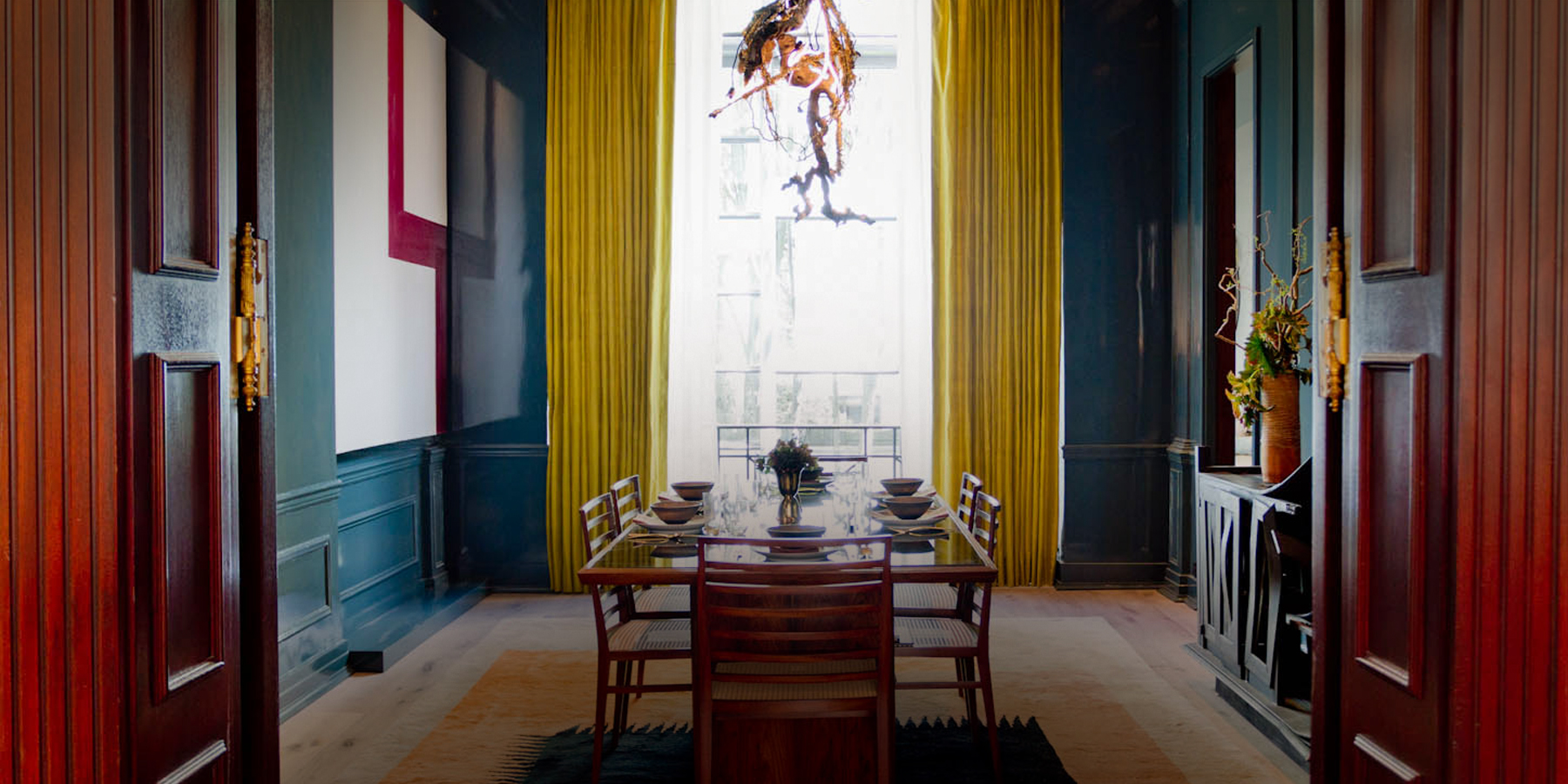 Meet Kristen McGinnis, a young New York–based interior designer whose dramatic, comfortable and palette-perfect work for collectors, including MoMA's president emerita Agnes Gund, of all stripes has everybody talking. 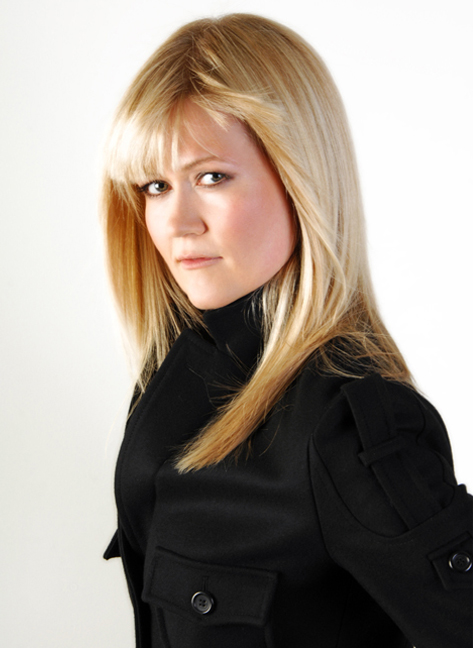 Trained in sculpture and painting, interior designer Kristen McGinnis, who also has a 1stdibs storefront, is known for integrating sophisticated design with tasteful — yet show-stopping — works of art. Top: In this year’s Kips Bay Decorator Show House, she paired a 1949 Joaquim Tenreiro dining table with artworks including Al Held’s 1966 painting Acracropolis.

This is the most personal space I’ve ever designed,” says Kristen McGinnis, during a tour in May of the dining parlor she created for this year’s Kips Bay Decorator Show House, in New York. Indeed, the eye-popping room, enrobed in glossy slate-hued lacquer, reflects McGinnis’s sensibility to a T. She balances bold art moves, mesmerizing custom-surface treatments, a palette that seems plucked from a Vermeer and a prevailing sense of drama, with a concern for comfort and an absence of pretention. The decor is equal parts studied and casual, rooted in academe and fashion — not unlike the North Carolina native herself.

But back to the art. In the Kips Bay room, a pair of seven-foot-tall Al Held abstractions overtake either end of the main wall — a placement that’s both irreverent and brilliant, serving to expand the sense of space and counterintuitively draw attention to compositional elements that might otherwise be overlooked if the canvases were mounted more centrally. Opposite, anchoring the edge of an explosive bronze buffet by the French artist Vincent Dubourg, is a petite low-hung Man Ray gelatin-silver print surrounded by the exaggerated breathing room it deserves. And suspended from the patinated gold-leaf ceiling is a neon-and-driftwood showstopper chandelier by artist (and childhood friend) Elliott Hundley. Trained in painting and sculpture herself, McGinnis has art-world cred to spare. Her first big commission was MoMA president emeritus Agnes Gund’s Upper East Side apartment, which landed the designer on the pages of W just a year after she launched her Union Square firm. 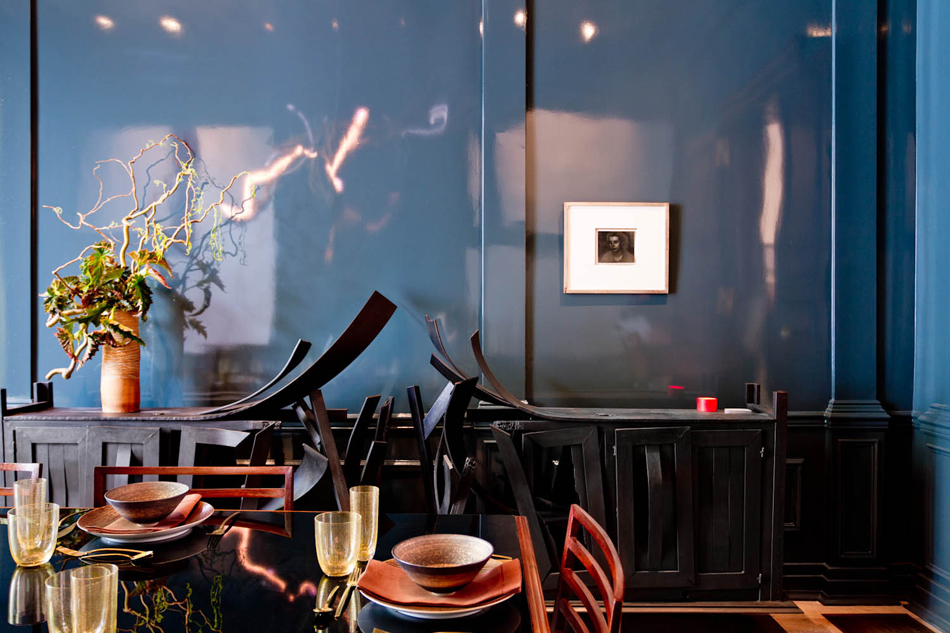 She’s since experienced a rapid ascent. Accolades include a Rising Star of Interior Design award bestowed by the IFDA, inclusion in Traditional Home’s inaugural list of the Top 20 Young Interior Designers to Watch and a memorable turn at the 2009 Hampton Designer Showhouse, where she kitted out a pine-paneled library with 19th-century antiques and edgy confections by Claude Lalanne and Michele Oka Doner. 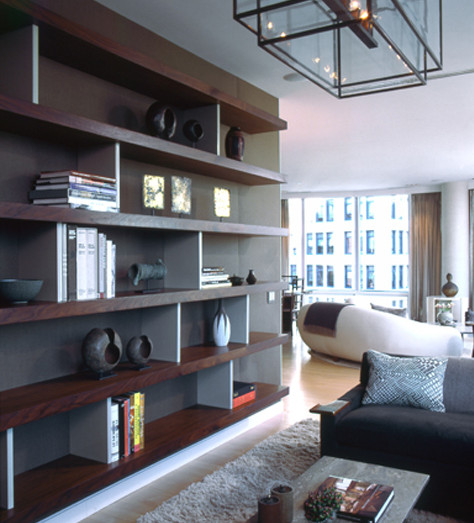 In this loft-like Manhattan apartment, McGinnis combined a bevy of custom-designed pieces: from a walnut-and-lacquer bookshelf and a wool-mohair sofa to a hanging light fixture made of oil-rubbed bronze and hand-rolled glass. Photo by John Hall

A likely key to this success? “I am so hands-on,” she declares. “And I don’t mind working a twelve-hour day to do the job of two people; then I know it’s getting done, and getting done right.” Her clients — many of whom are art-world figures — appreciate that attentiveness. “It’s one thing to create a beautiful interior that’s artfully done. But most important is responding to a client’s unique requirements and needs,” McGinnis says. “Or, rather, balancing the two.”

Equipoise, it turns out, is another leitmotif of her work. “I love a mix of elements — shiny and rough, historic and contemporary — because it makes the dialogue stronger,” McGinnis explains. “Everything talks to everything else in a room.” Well said, especially from someone who designs rooms that everyone’s talking about.

I come from a creative family: My grandmother sewed and was in theater design, and my mom sewed, too. I grew up painting, drawing, making sculpture. I initially wanted to go into fashion. The first time I saw “Style With Elsa Klensch,” in eighth grade, I said, “That’s it!” That spring, there was a Carolina Herrera trunk show at our local Belk, and I saved up $75 for a ticket. I marched right up to Ms. Herrera — wearing this cute Albert Nippon outfit that I made from a Vogue pattern — and asked, “I want to be a fashion designer, so where should I go to school?” She replied, “My dear, you have to go to RISD.”

Then Bill Blass came to town for his trunk show. So of course I did the same thing: “Carolina Herrera told me I should go to RISD; what do you think?” Can you imagine? This young teenager from North Carolina, asking Bill Blass where to go to school, and dropping names like that! And he said in his amazing smoker’s voice, “Well, darling, if you want to work on Seventh Avenue, you must go to Parsons.” That was like God talking. So it was all about Parsons from that point on. I had tunnel vision. 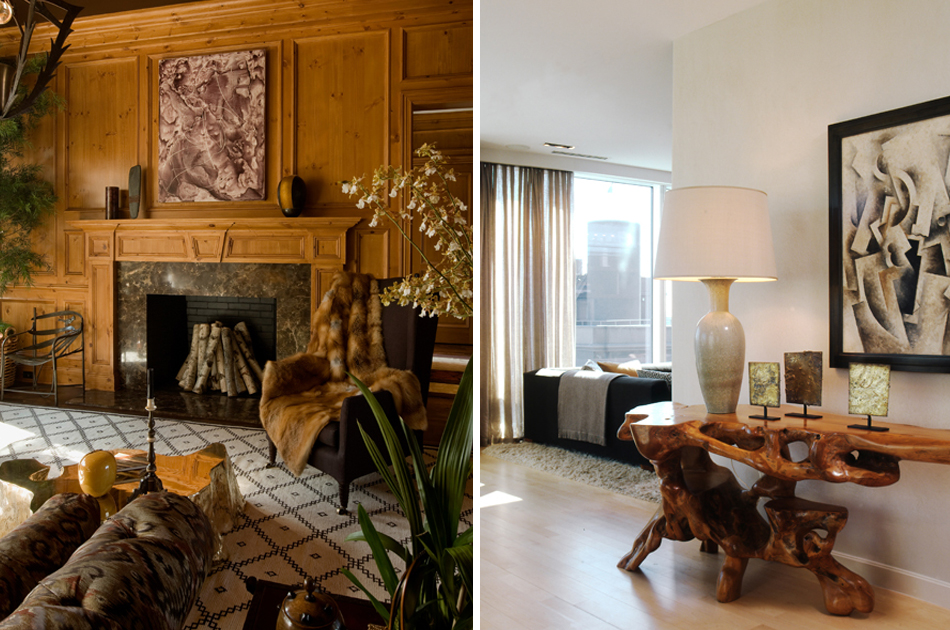 Art school. I was in private art classes from the age of four. My parents were so supportive; that nurturing was key, and one of the reasons I try to support [philanthropic] arts-education efforts.

I went to North Carolina School of the Arts for my senior year of high school and freshman year of college. I thought that curriculum was rigorous but then I got to Parsons. The demand of the course load, the requirements — it really prepares you for the professional world, for shouldering multiple clients. 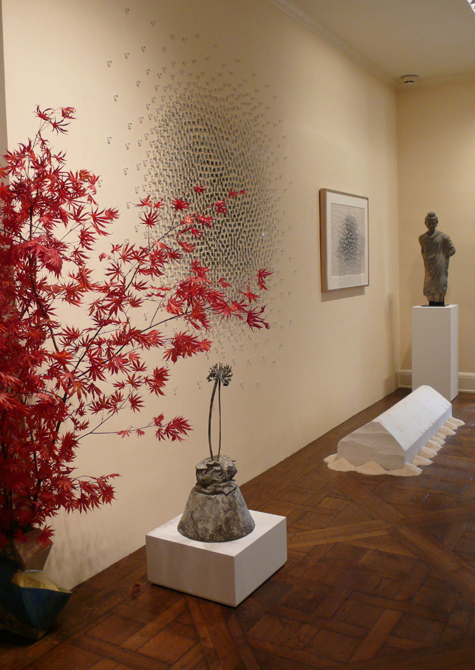 McGinnis frequently works with art-world figures and collectors, include a New York resident whose bronze Cy Twombly sits to the left of a wall-mounted Teresita Fernández work. The floor sculpture, Reishaus, is by Wolfgang Laib. Photo by Roe Ethridge

How it all began:

During college, I had a few jobs in fashion — which made me realize I didn’t want to work in fashion. The reality is not the fun part. That’s what I love about being an interior designer: Even the dirty work is totally enjoyable to me. I love going to construction sites, to workrooms. That process is what makes my job so rewarding.

After school, I worked for Sills Huniford and then for Erica Millar. But growing up, I always wanted to have my own business. So when I turned 30, I said to myself, “I moved to New York to do this. I don’t want to be the person who never took the chance.” So, in 2005, I founded my firm, Kristen McGinnis Design.

Designing Agnes Gund’s apartment. I got the commission one year after striking out on my own.

Being invited to do Kips Bay this year was another big breakout moment. I feel really fortunate to have had the opportunity; so many great things have stemmed from the experience already. It’s a calling card, being supported by your peers within the design community.

It goes through phases. I had a lot of bachelors for a while, then a lot of families. But it’s shifting to art-world figures. Working with collectors is very interesting. The most important thing to them, of course, is their collection. At the same time, they want to live with their art in an unpretentious environment that doesn’t look gallery-like. The challenge is to incorporate it into their house in a way that’s comfortable and casual — yet at the same time they tend to be adventurous.

Agnes Gund is the epitome of that: Her home is filled with museum-quality works and daring choices, yet it’s so livable and approachable. To make her collection the star of the show, we brought in furniture that can stand up to work by Rothko and Jasper Johns — but that’s still spare and humble, like the pair of Eyre de Lanux chairs. The simplicity is key to the design.

You can really tell a story through your palette. The shade we used in Agnes Gund’s dining room was a collaboration with Donald Kaufmann. It was inspired by Chinese ink color palettes and we nicknamed it Baofing Blue. But then we installed the Brice Marden in the room, and it became Brice Marden Blue. Rich color lets artworks shine.

Of course, some clients like a really neutral palette, so I’ll come up with super-sophisticated non-color colors. Like mauve, but neutralized with elephant or taupe. So the client thinks of it as a neutral — but in reality I’ve snuck in some color. 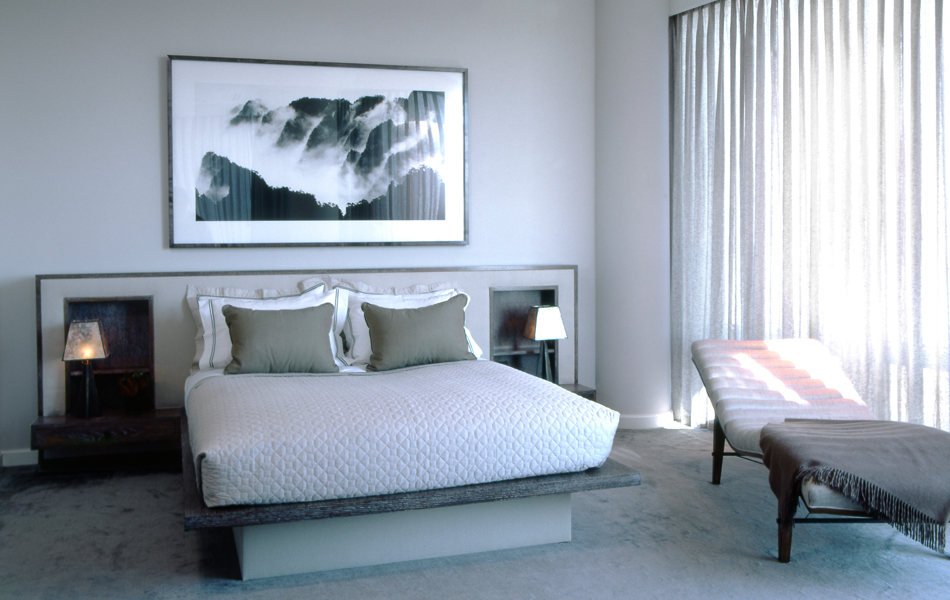 McGinnis-designed pieces in this bedroom include the upholstered, cerused-oak platform bed and the bronze-and-mica bedside lamp; Wang Wusheng’s photograph of Mount Huanshan, taken at Lion Peak in 1979, hangs above the bed. Photo by John Hall

I love the modernism of 1920s Berlin because it’s all about the simplicity of the line; the form takes precedence. But my inspirations vary depending on the project — and the location. If I’m working in L.A., I might channel John Lautner or Tony Duquette.

Los Angeles. I’m really into the contemporary-art scene there. I love the modernist 1930s homes — those nice straight lines — that dot Silverlake. I also have a fascination with Neutra and Lautner. In L.A., it’s all about the historic house. For someone like me, who is accustomed to living in a small New York apartment, the intimate scale of the houses is very appealing. They’re humanistic in their proportioning.

Go-to for a dramatic moment:

Lighting. It is a great opportunity to make a bold gesture. And for many clients, it’s an easy risk if they want something poetic or sculptural but are shy of art. Right now I’m obsessed with Apparatus, a Chelsea studio that I discovered at ICFF. They do beautiful work in brass and glass, and I also flipped for these sconces they crafted from African bowls.

Passionfruit sangria at ABC Cocina, which is a few blocks from my office. It’s like my cantina. 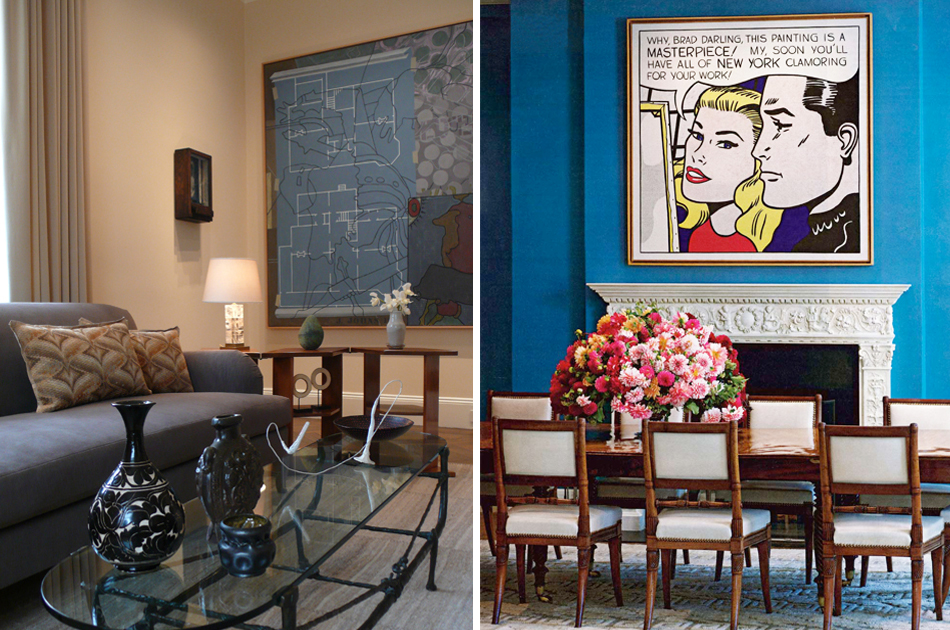 In Gund’s living room, left, art and design sometimes combine in a single piece, as they do here, in a bronze coffee table by Diego Giacometti and a rock crystal Jean-Michel Frank lamp. In the dining room, McGinnis set Roy Lichtenstein’s Masterpiece, 1962, against one of her signature blue hues, and added an antique English dining table and chairs. Photos by Roe Ethridge