The Father of Functionalism: Le Corbusier 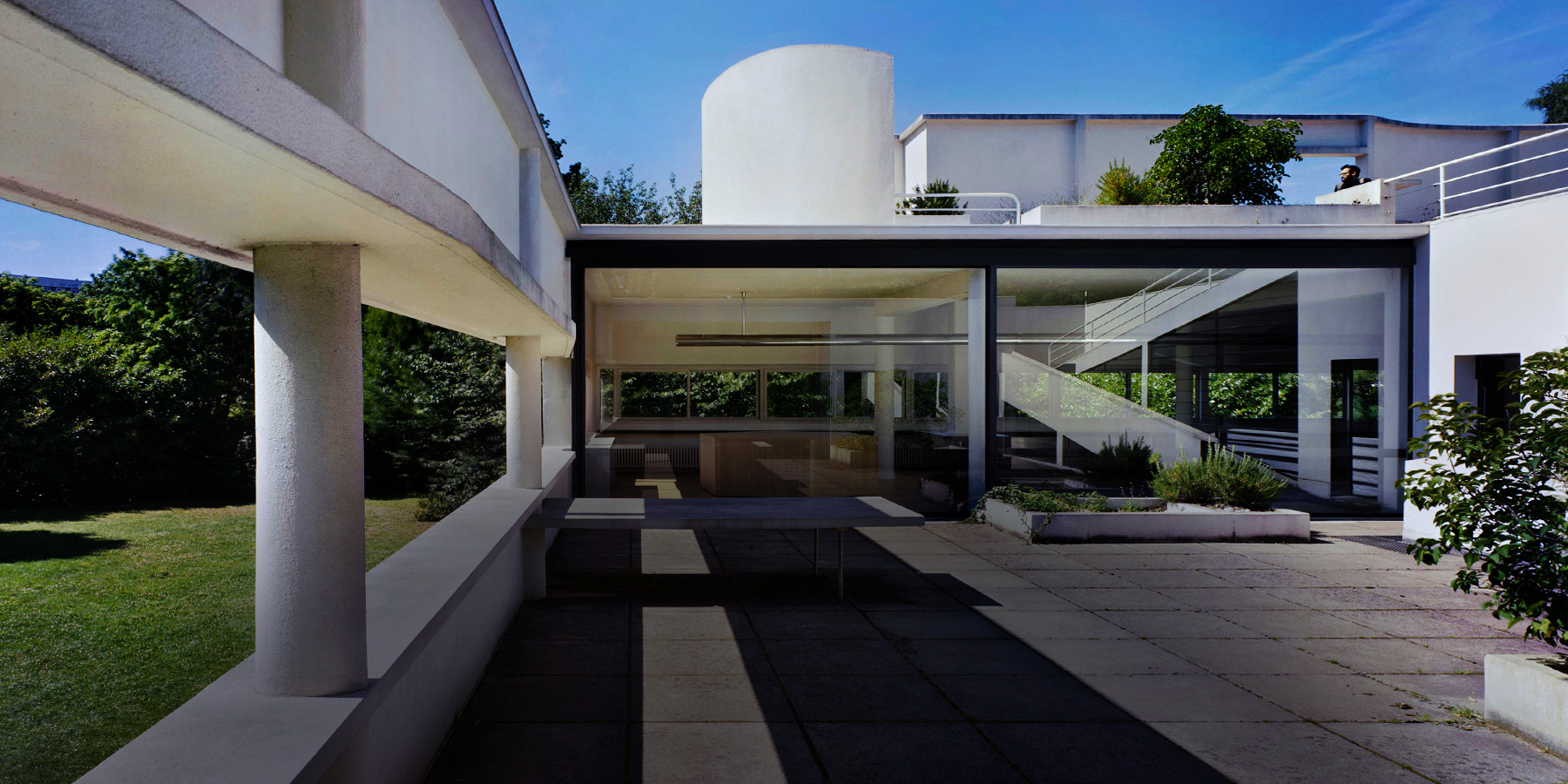 A major new retrospective at New York's MoMA investigates the iconic, imperious modernist prophet, displaying all aspects of his oeuvre from paintings to furniture to architecture. 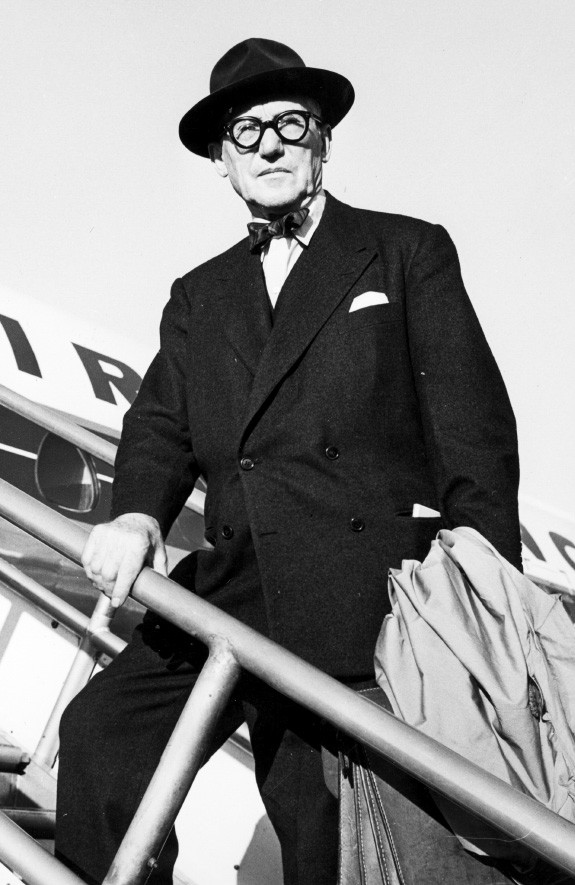 July 17, 2013Le Corbusier adapted his moniker from his mother’s maiden name, Lecorbésier, which means “the crow-like one” in French; in retrospect, his signature glasses and somewhat gaunt mien seem to suit the title. Top: The architect’s iconic Villa Savoye, which he designed with his cousin Pierre Jeanneret between 1928 and 1931 on the outskirts of Paris. All photos courtesy of MoMA

Charles-Edouard Jeanneret, the Swiss-born French architect known as Le Corbusier was blessed with a surfeit of talents: He was an artist, a pioneering architect of the International Style, a decorator, a city planner and a writer. He was also a modernist prophet, a visionary and a utopian. Over the course of 60 years, he worked on 400 architecture projects and built 75 buildings in a dozen countries. He was surely an insufferable egomaniac, but as proven by “Le Corbusier: An Atlas of Landscapes,” a dazzling exhibition at New York’s Museum of Modern Art that runs through September 23, he was also unquestionably a genius.

Born in 1887 in La-Chaux-de-Fonds, Switzerland, Le Corbusier attended art school and studied the decorative arts in his hometown. (The MoMA show opens with his incredibly accomplished watercolors of his native Jura Mountains, done at the age of 15, and his artwork, whether realist or abstract, only got better.) In 1910, he went to Germany to study urban planning and work for architect Peter Behrens, a participant in the modernist Darmstadt art colony. By 1912, he had designed a villa for his parents, whose living room is reproduced in the show, furniture and all; by 1917, he was in Paris; and by 1924, he’d set up an architecture office in a defunct convent with his cousin Pierre Jeanneret. He used that studio until his death in 1965.

Moving through the show, you follow his life as he started traveling, filling sketchbooks with drawings of landscapes in Italy, Bulgaria, the Balkans, Greece and Turkey. He traveled on foot and by ships, cars and planes (from whose passenger seats he loved to draw). He was likely the first global architect, working in, among other locales, Buenos Aires, Rio de Janeiro, Moscow, Tokyo, Algiers and Chandigarh, India. 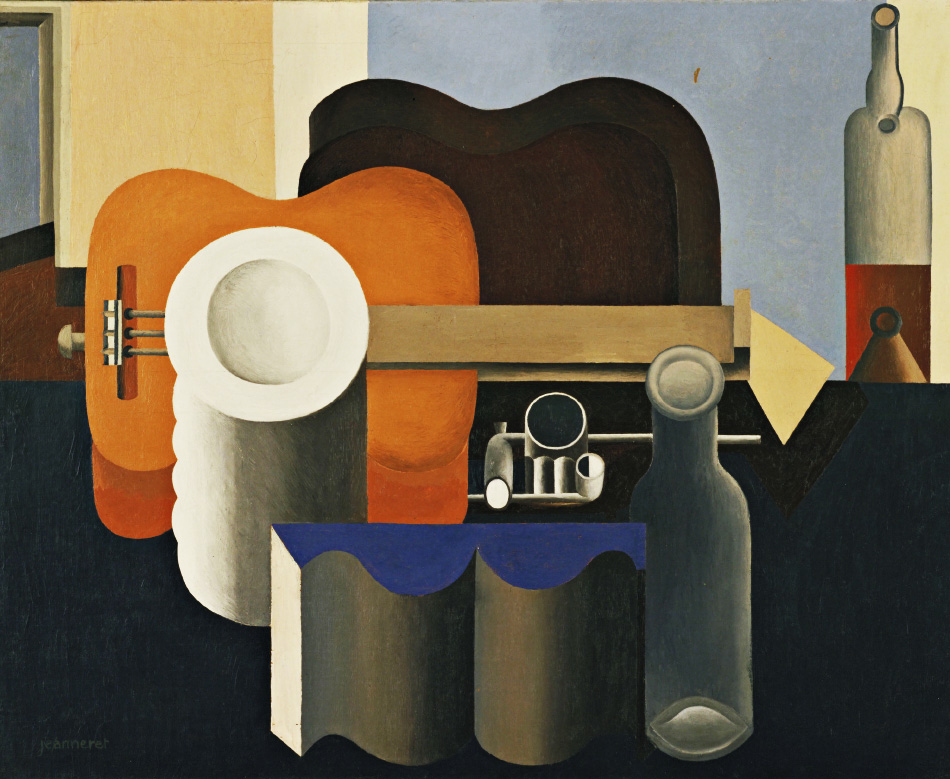 An artist as well as an architect and urban planner, Le Corbusier completed this Cubist-like still life in 1920. 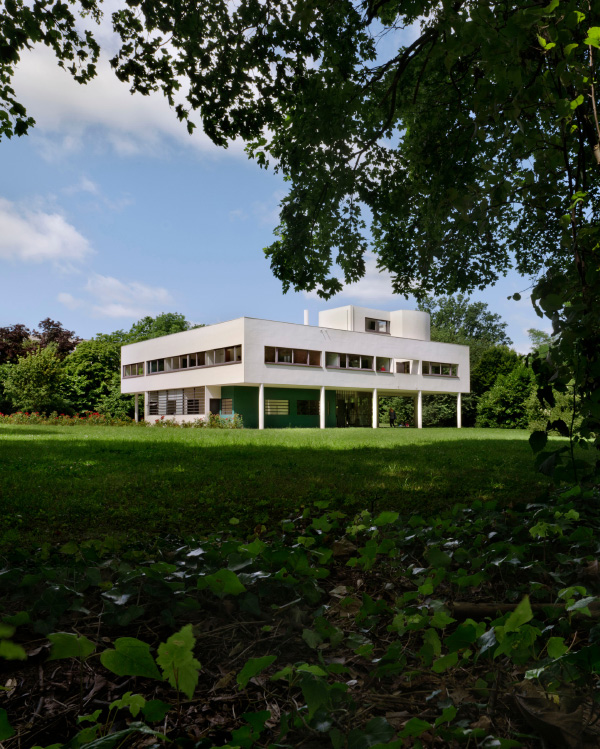 Le Corbusier created his Villa Savoye, located just outside Paris, to be the quintessential “machine for living.” Photo © 2013 Richard Pare

The show has a fascinating focus. As organized by guest curator Jean-Louis Cohen, a professor of the history of architecture at New York University’s Institute of Fine Arts, together with Barry Bergdoll, MoMA’s architecture and design curator, the exhibition concentrates on four very different “landscapes” pursued by Le Corbusier: the landscape of found objects (we learn that the chapel at Ronchamp, France, was inspired by a crab shell he drew in 1946); the domestic landscape (featuring the types of iconic furniture regularly sold by more than 20 dealers on 1stdibs); the architectural landscape of the modern city (think of his plans for the United Nations along New York’s East River) and “territories” he planned (like the regional capitol in India).

In a book in 1925, he was one of the first architects to use the term “urban landscape,” and he also pioneered the proposition of radical modern landscapes for cities like Paris, one of which, the Plan Voisin of 1925, would have gutted the Right Bank and inserted 10 skyscrapers into the cleared space. A highlight of the show is a film of one of his illustrated lectures to architecture students, during which we see him draw an apartment building scheme in just a couple of minutes.

Today, Le Corbusier is probably most admired for his houses, and the show includes sketches, original models, plans and elevations of many of them. MoMA has also commissioned large new photographs of the most iconic residences: Villa Savoye, on the outskirts of Paris; Villa Le Lac, on Lake Geneva in Corseaux, Switzerland; and his own vacation house, Cabanon, on the French Riviera. 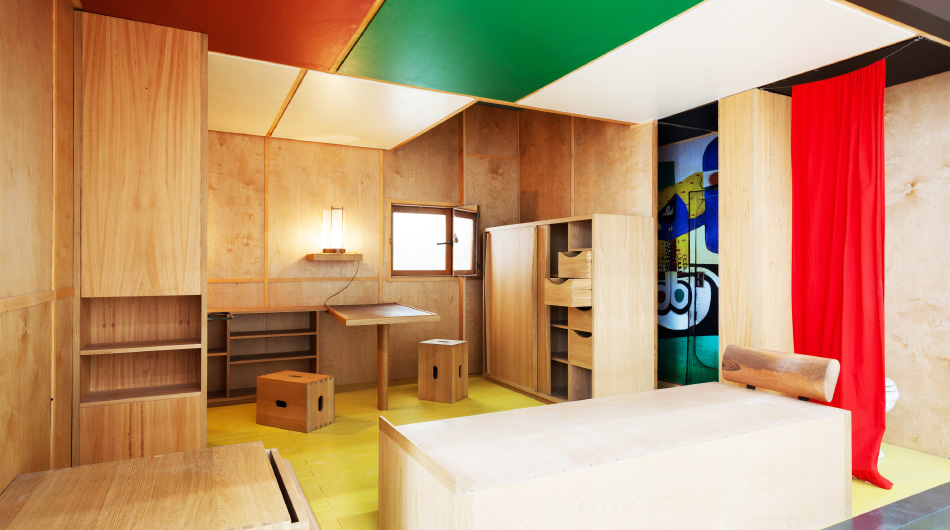 The MoMA show includes a complete reconstruction of the interiors of the vacation home Le Corbusier built in southeastern France’s Roquebrune-Cap-Martin as a birthday present for his wife in the early 1950s. Photo by Jonathan Muzikar

Design aficionados will be particularly taken by a full-size mock-up of Cabanon. Meant to mimic the vernacular architecture of its region, it has a 12-foot-by-12-foot interior, with one bed, one built-in table, a sink and some chestnut stools. “Not a piece of wood, in its form and in its force, not a ligature, is without a precise function,” Le Corbusier wrote about the cabin, located in Roquebrune-Cap-Martin, in southeastern France. Pity his wife, Yvonne Gallis, for whom the tiny house was a birthday present. It has only one small window opening out to views of the Mediterranean and, in the distance, Monte Carlo.

Another room-size interior, from 1952’s Unité d’Habitation apartment building, in Marseille, France, illustrates his commitment to site: The building was designed to offer vistas of the hills in the rear and the bay in the front, “just like the Parthenon, a parallel Le Corbusier himself explicitly drew,” Cohen notes in the excellent 400-page catalog.

“Not a piece of wood, in its form and in its force, not a ligature, is without a precise function.” 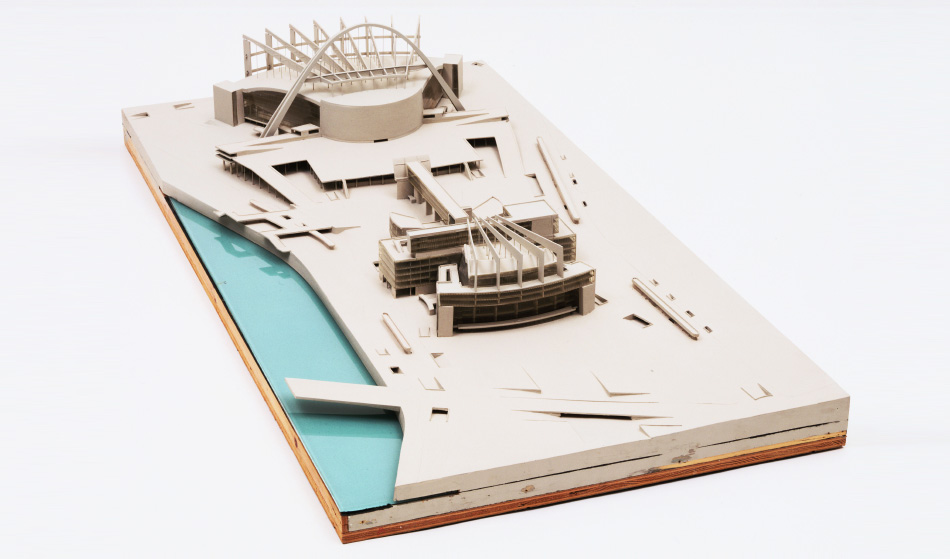 A 1932 model of the architect’s design for the Palace of the Soviets, in Moscow, displays a more exuberant strand of modernism than some of his more strictly platonic projects. 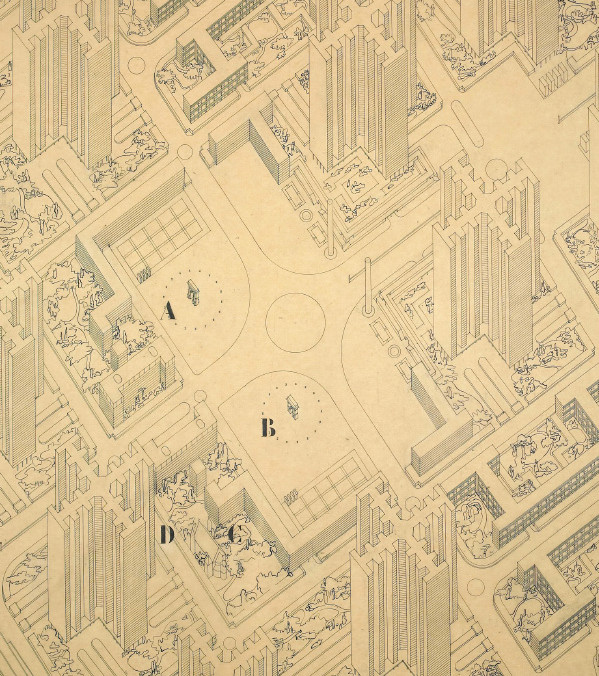 Le Corbusier’s controversial 1925 Voisin plan for Paris proposed leveling the city’s central area north of the Seine and replacing it with 60-story cruciform towers rising out of open green spaces.

Despite his travels, Le Corbusier never stopped thinking about his adopted City of Light. He wanted to raze the center and make Paris a model city for the machine age, with dozens of glass towers surrounded by gardens: “The city rises vertical to the sky, open to light and air, clear and radiant and sparkling,” he once wrote.

From 1916 to 1965, “Paris remained a continual reference point,” Bergdoll writes in the catalog, “at once the main object of his desire to reform the city as inherited and the chief inspiration for his own history of urban theory and reform.” He wrote books, lectured, lobbied the city government, drew egalitarian housing schemes and designed pavilions for international fairs. His ardor was not reciprocated.

Paris, he famously remarked in 1925, “is always against everything, and one is never helped or valued.” He called Paris a “magnificent destroyer of enthusiasms.” And yet his enthusiasms continue to inspire architects and designers nearly 50 years after his death — and no doubt will continue to do so well into the future.

Iconic Le Corbusier through the years