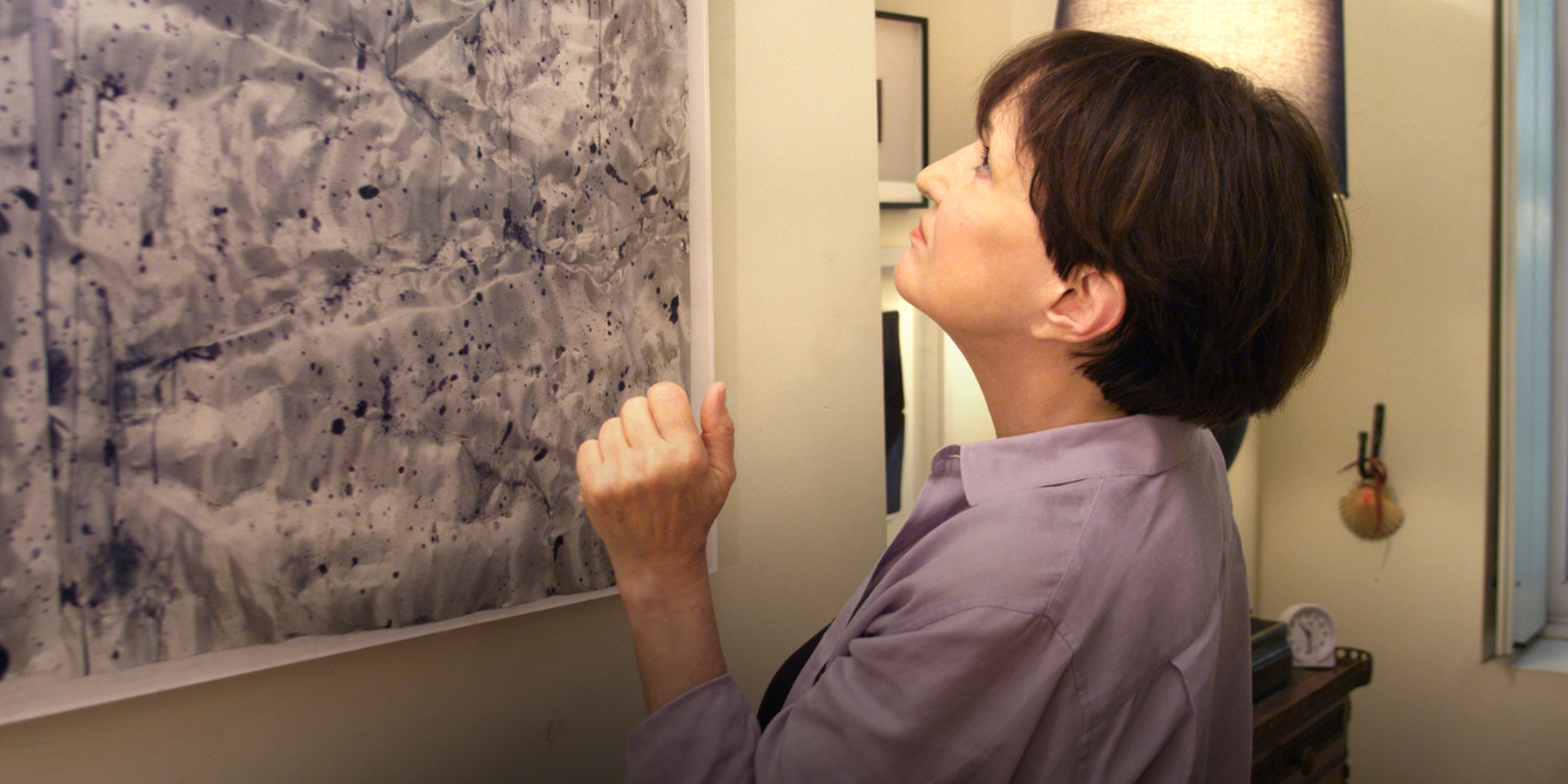 Now in her 70s, Margaret Evangeline continues to experiment with different mediums — from paint to gun bullets — as she explores the process of making art as well as her relationships with family, war and motherhood. 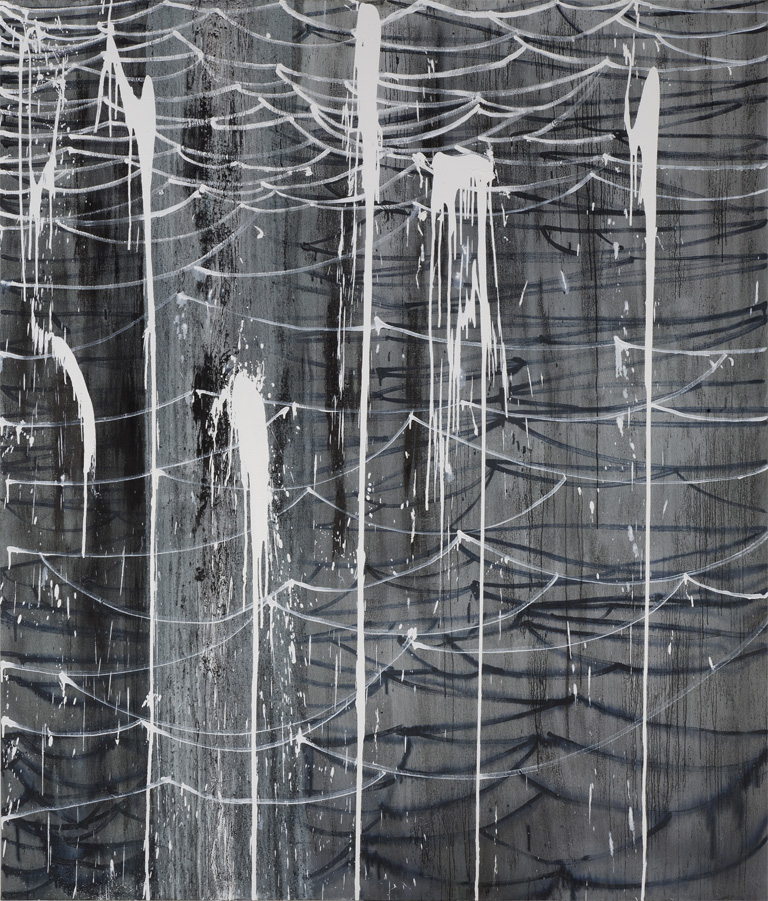 January 12, 2015Night Glare, a 2013 painting from among Margaret Evangeline’s diverse body of work. Top: The artist examines her No Thing, 2001. Photo by O’Neal Brown

In 2013, Margaret Evangeline studied the art of Zen archery. “It took a whole week of these little intricate steps to get to the point where I could take the first shot,” says the artist, who now has added to her diverse repertoire of mark-making the use of a crossbow and arrows to pierce steel panels. This was her method, in fact, for Glass Like a Memory, Steel Like a Valentine, a permanent 18-by-18-foot installation recently completed for an open student space at Michigan State University. “It’s about mastery rather than perfection,” she says.

Throughout her career, Evangeline has always been more focused on the process than on the end product. In her paintings — whose networks of individual brushstrokes give the impression of watery currents, or cellular matrixes, or bursting camellias — she applies each line a step at a time, without forethought or correction. In her gunshot works dating back to 1999, with ruptures in the stainless steel that can evoke flowers or distort reflections like raindrops on water, she takes aim at her target without predetermination. “I turn it over to my inner eye,” says Evangeline, speaking in her Chelsea studio, which overlooks downtown Manhattan and a good stretch of the Hudson River. “I can tell by the sound when I’m finished with a piece.” 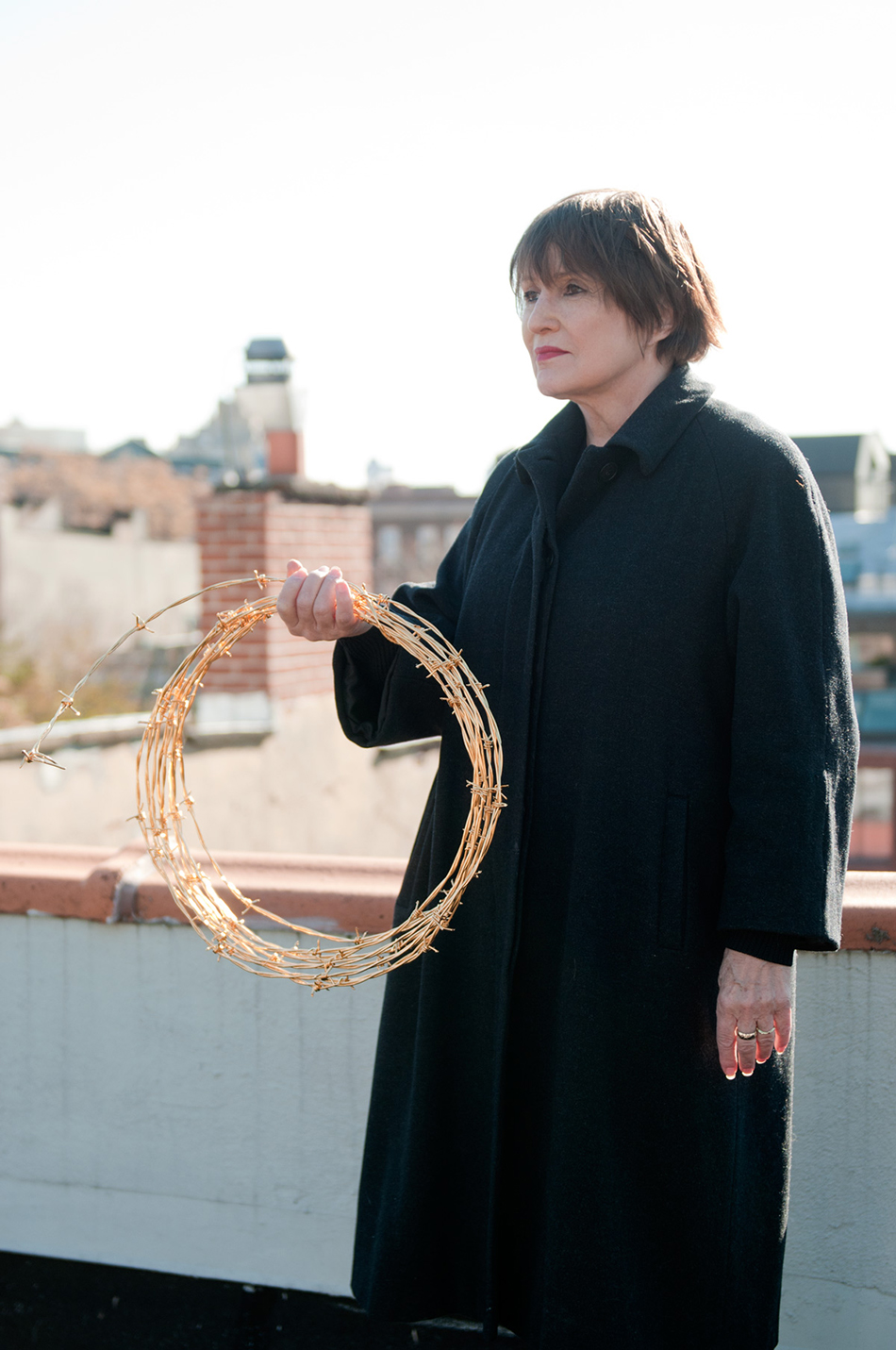 Evangeline holds Something Auratic From the Golden West, 2013, made of gold-plated barbed wire, in a 2014 photo by Jahn Hall.

Evangeline, 71, has always been a good shot. Born in Baton Rouge, she was taught at age five how to use a gun by her Cajun grandfather, who hunted for food and came from a long line of traders and explorers who traveled the New World from Hudson Bay to Louisiana. “We shot tin cans,” Evangeline recalls, “and as a little girl I thought the way the shots opened up in the metal looked like flowers and were really beautiful.” At 20, she married a pilot training in the Air Force and moved with him to bases in Texas and Alabama, among other places, while raising their three sons. Always drawn to making art, Evangeline was only able to pursue it with focus when they returned to Louisiana, where she received her B.A. in liberal arts in 1975 at the University of New Orleans; she went on to get her MFA in painting there in 1978. Teaching and exhibiting locally, Evangeline got her first New York show at Elizabeth Moore in 1992; her abstract paintings, in which she mixed oils with unconventional materials like crystalline powder and flocking, were well reviewed in Art in America. By then divorced and with her children grown, she felt it was her chance to move to New York. She arrived there in her truck on New Year’s Day 1993.

Today, Evangeline cites Louise Bourgeois as an influence; her artistic career also came later in life, after she’d raised her three children. “She worked from her life’s story almost obsessively, processing the mythology of the family,” says Evangeline. “I do that too.”

An ongoing series of abstract paintings, including Glacier Observations (2014), which is part of the show “Group Matrix,” opening January 14 at Stux Gallery in New York, suggests waves and tides in the flow of lines pushing and connecting across the canvases. Evangeline, who had a studio on the Mississippi in New Orleans and for the last 20 years has looked out her window at the Hudson, found inspiration in the Hudson River School painters and their vision of an American Arcadia. Simultaneously, she was processing her feelings of distance from her oldest son who was in the Air Force and served three tours of duty in Iraq. Expanses of water became emblematic of physical and emotional gulfs between people. “Eventually, they started to mean other things to me as well, like lines of communication and a portrait of the self in its loosening of boundaries,” she says. 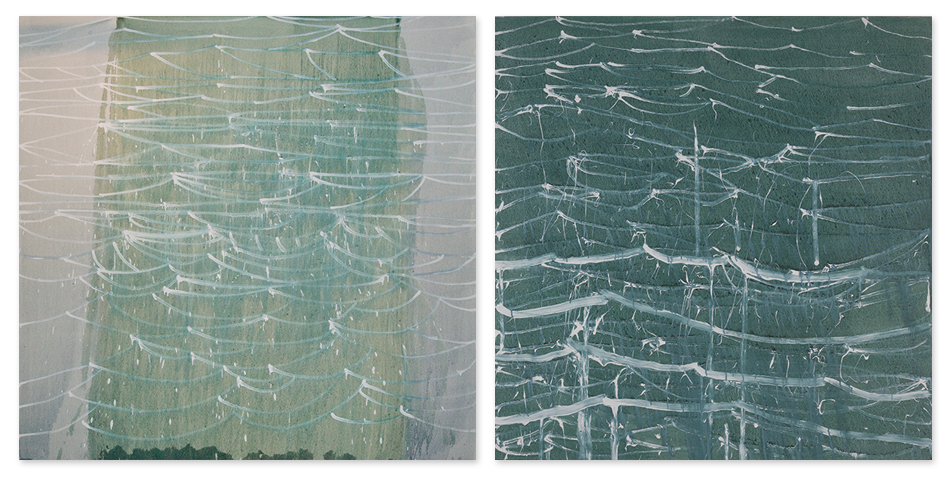 Glacier Observations, 2014 (left), and Ice Drift, 2013, will both be shown at “Group Matrix,” an exhibition opening this week at New York’s Stux Gallery and running through February 14.

““It’s about mastery rather than perfection.”

Evangeline’s JFK with Son John, October 10, 1963, Washington, D.C., 2013, is a digital print on an emergency blanket that incorporates her signature bullet-hole motif.

These meditative paintings, where thin veils of background washes contrast and sometimes start to dissolve the textured strokes on top, may seem incongruous with her punctured-steel pieces made with the aggressive gesture of shooting a gun. But both modes of work stem from her interest in different types of mark-making. During a 1999 residency at Art Omi, in upstate New York, Evangeline, who had been painting on aluminum, borrowed a rifle from the art residency director’s son to experiment with her metal panels. “The world had changed since I first learned how to shoot, starting with the Kennedy assassination,” says Evangeline. “All those images flashed before me once I started to shoot again.” Initially unnerved by the action, she returned to it again after 9/11, during a residency in New Mexico, where she shot into polished stainless steel panels that distorted the reflections of the landscape with the chance compositions imposed by the trajectory of the shots. “I thought of it as making a painting without paint,” says Evangeline, who liked how it connected to her own narrative — both her childhood and her family’s history with the military. Her results offer warped mirrored environments, at once beautiful and unsettling, through which one may contemplate the roles that guns have played in American culture, past and present. 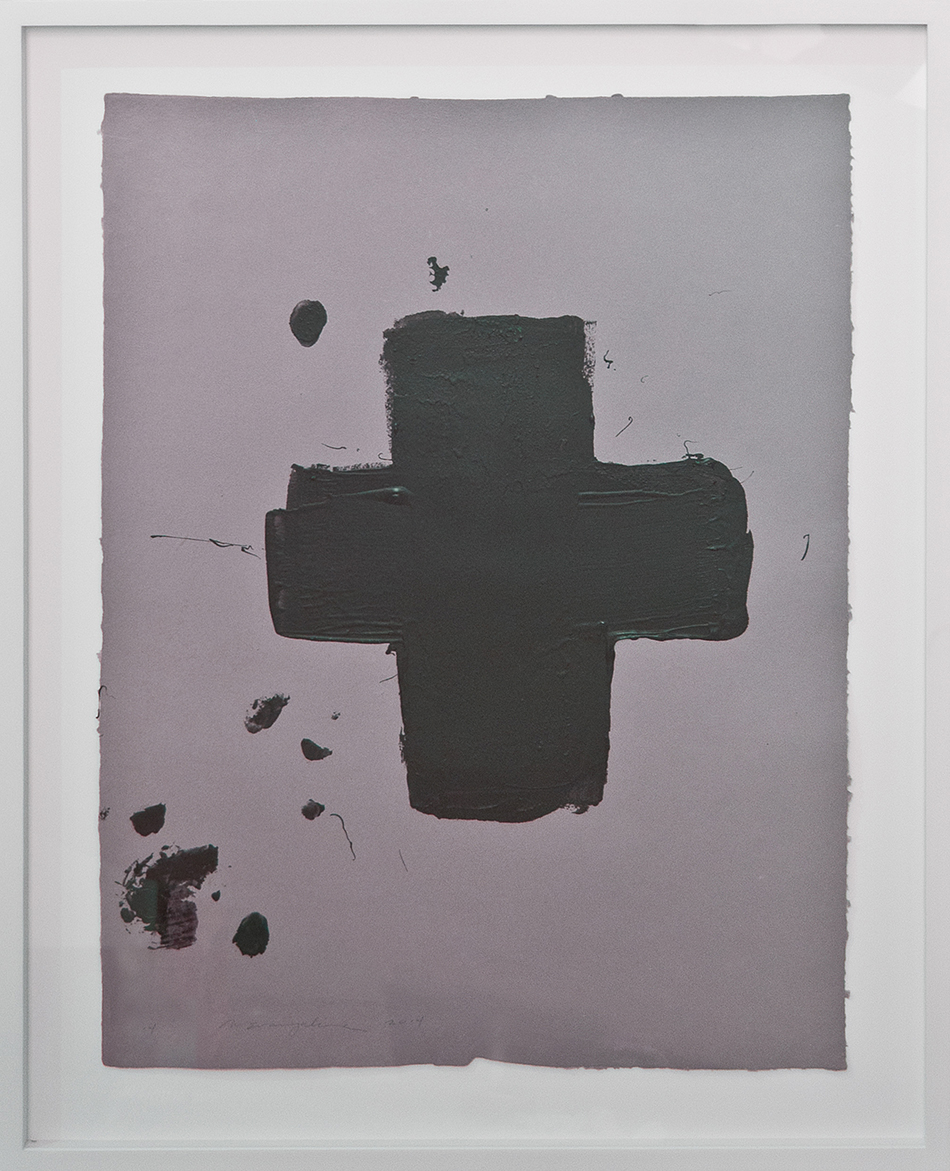 Target, 2014, will be shown at “Pulp Fictions,” an exhibition at the New York not-for-profit Dieu Donné starting January 15.

A large retrospective opening March 6 at the Louisiana State University Museum of Art, in Baton Rouge, will bring together her paintings with her shot pieces, including a collaborative installation between Evangeline, her son and his command in Iraq called “Sabachthani” (2012). In an attempt to cope with her feelings of fear and isolation that were omnipresent for her every time he went to war zones, Evangeline fabricated 14 metal bars modeled on Barnett Newman’s long one-and-a-half inch-wide “zip” painting called The Wild (1950) and mailed them to Iraq. Her son had the pilots in his command shoot the bars and return them back overseas. “When I unpacked them and could touch them, I felt a moment of connection that I didn’t have the whole time he was gone,” says Evangeline, who coated them with iridescent white paint. (“All family communication is mediated and controlled by the government,” she adds. “This was under the radar.”) In the retrospective, the bars will be installed around the walls of one gallery like the Stations of the Cross, drawing a connection between military service and Christ’s sacrifice.

“To me, these were about transforming difficult feelings and finding a way to express them with something tactile,” says Evangeline, whose image of a plus-sign-cum-target, rendered in black rubber on handmade paper, will be part of “Pulp Fictions,” which opens at the New York not-for-profit Dieu Donné on January 15. She feels her gender does shift the message away from violence. “I think it means something different to be a woman and to use a weapon to make a work of art.”