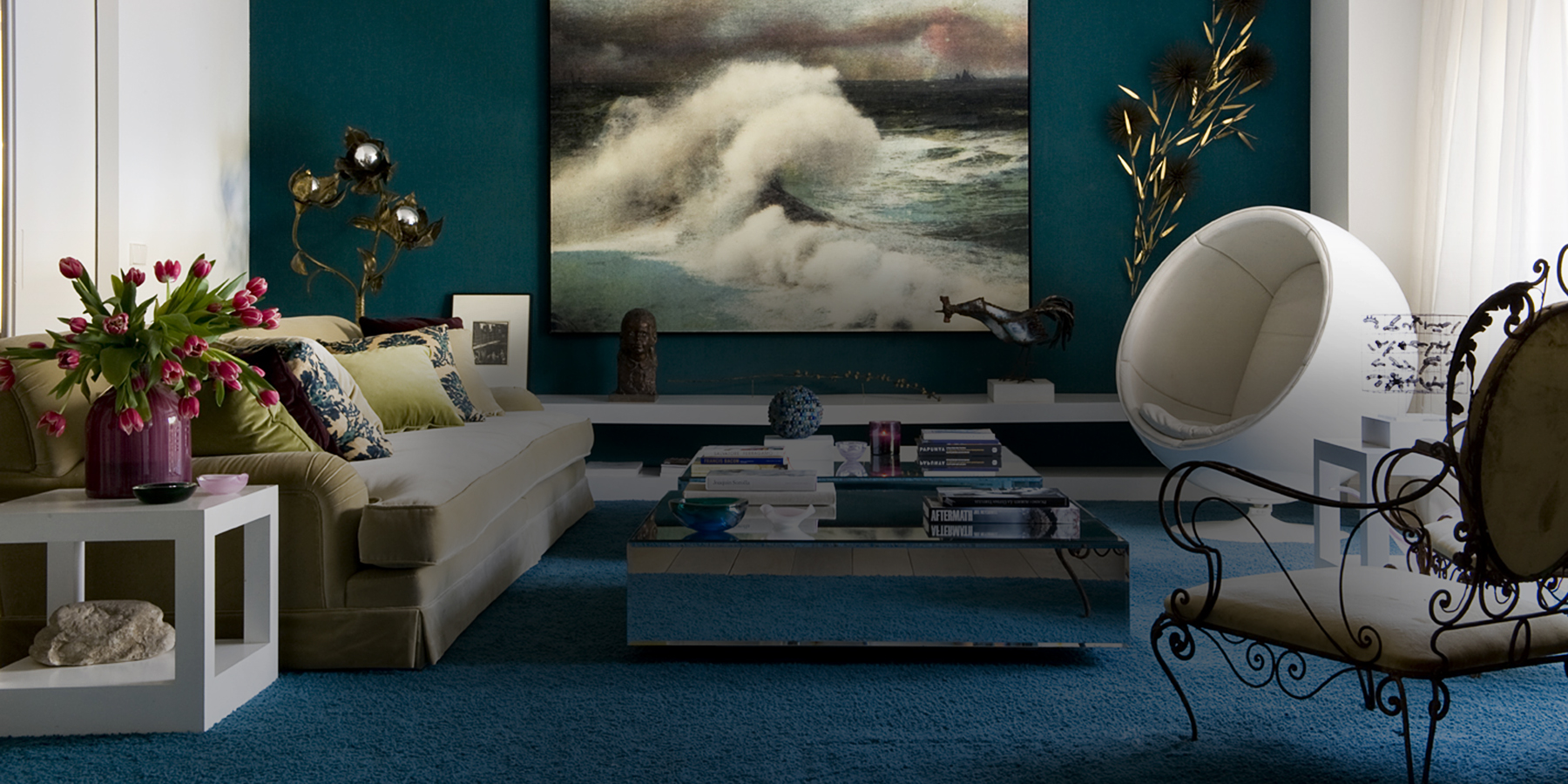 With her irreverent wit, flair for drama, and impeccable eye for detail, María Lladó composes cinematic interiors that have played a supporting role in Woody Allen’s Vicky Cristina, as well as attracting passionate following of stylish clients, among them Giorgio Armani. 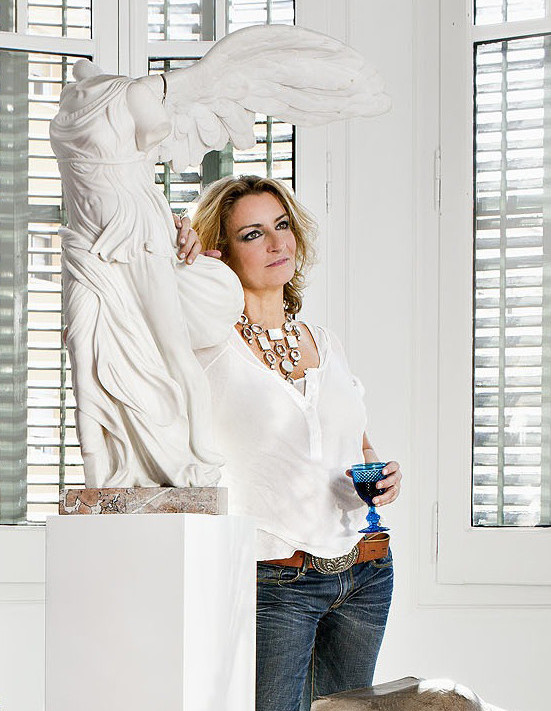 May 17, 2014María Lladó at home. Top: For a Berlin apartment, Lladó designed the mirrored table and velvet sofa. A photograph by Elger Esser dominates the living room, and is flanked by a C. Jere 1949 sculpture, at left, and an Eero Saarinen Ball chair. All photos by Montse Garriga

Interior designer María Lladó’s little white dog leads the way up a shady garden path to the entrance of her comfortable house in the quiet Barcelona suburb of St. Just Desvern. With a big smile, Lladó offers an exuberant welcome, leading me through a foyer decorated with a bust of Goya by 20th-century Spanish sculptor Mariano Benlliure and a candy-colored striped painting by Brooklyn-based artist Markus Linnebrink. Chic in black pants and a silk shirt set off by leopard-patterned boots, and with silver bracelets jangling, she looks like she’s dressed more for a night out on the town than for an afternoon spent solving last-minute problems in a client’s new Barcelona apartment — which is what she actually has planned.

Both Lladó and her home exude a lively, eclectic style. Beyond the foyer, I find her bright, spacious living room is filled with an abundance of intriguing objects: three wooden mushroom-shaped sculptures from France sprouting from the floor; a sleek, vintage beige chair from the ’60s; and, filling an entire wall, a striking, large-format photograph depicting the elegant interior of a Portuguese monastery by German photographer Candida Höfer. Light glimmers on the white-painted floors, giving the place the feel of a summery holiday home.

Moving into the dining room, which dramatically showcases a tulip-shaped, 17th-century brass Florentine chandelier, Lladó tells of how she got the wrought-iron dining chairs from her grandparents’ garden in El Escorial, outside Madrid. She’s juxtaposed these with amusing posters of King Kong movies. 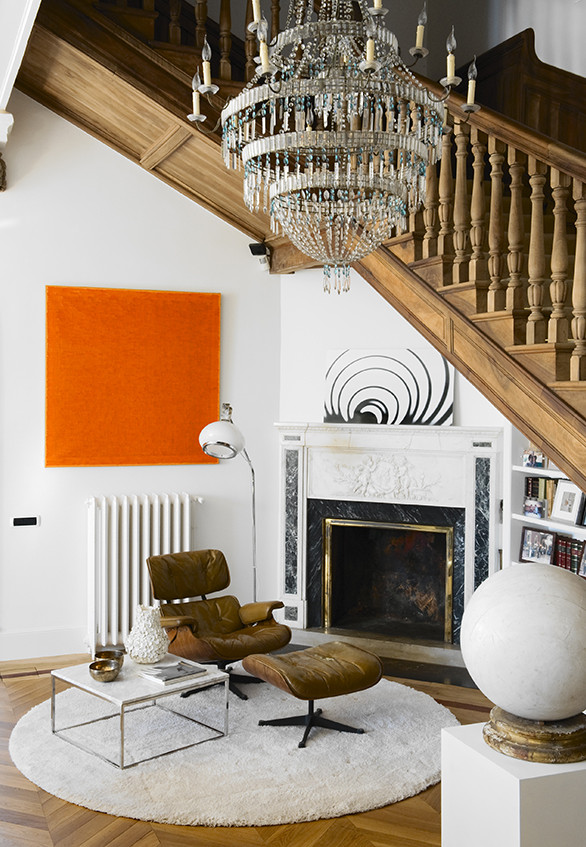 Llado’s unconventional sense of style has made her a darling of prestigious American and European architecture and design publications and has won her numerous devoted clients and impressive commissions: Fashion icon Giorgio Armani hired her to design his Madrid showroom and actress Penelope Cruz convinced Woody Allen to use interiors she’d designed as settings for some scenes in his 2008 film Vicky Cristina Barcelona. While she has designed several stores in addition to the Armani showroom, as well as a barbershop, a restaurant and a hotel, she has a particular passion for residential interiors. (In fact, even in that hotel — a little place in Torrecaballeros, Segovia, which has since closed — she gave every guest room a different feeling, as if it were a private home.)

“Everything has to be very personal with me,” Lladó explains. “People who come to me know my work. I’m very careful with them, like a psychologist. I have to figure out how they want to live. We develop very close relationships. Often, I do their next houses. They give me liberty; then I can fly.”

She juggles several projects at a time, recently ranging from a grand house in the Hamptons to a bachelor pad in Berlin to a cozy mountain lodge in the Pyrenees. Her life is a constant commute among these various sites, her office and warehouse in Madrid and her Barcelona home, which she shares with her husband, Alfonso, and two young sons, Manolito and Jorge. To keep it all functioning, she works closely with her business partner, designer Carina Casanovas, and she keeps an architect, carpenter, gardener, lighting designer and upholsterer on call 24/7 in both Madrid and Barcelona.

Casanovas joins us for coffee, and the duo talks about how every summer they hop in a truck, Casanovas at the wheel, and head to the South of France, where they go to fairs and find a major portion of the furniture, objects and paintings that fill the warehouse. (They also travel to Istanbul, Lisbon and throughout Italy for special finds.) “I am a compulsive shopper,” she confesses. “I fall in love with so many things. I am the best buyer and the worst seller.” 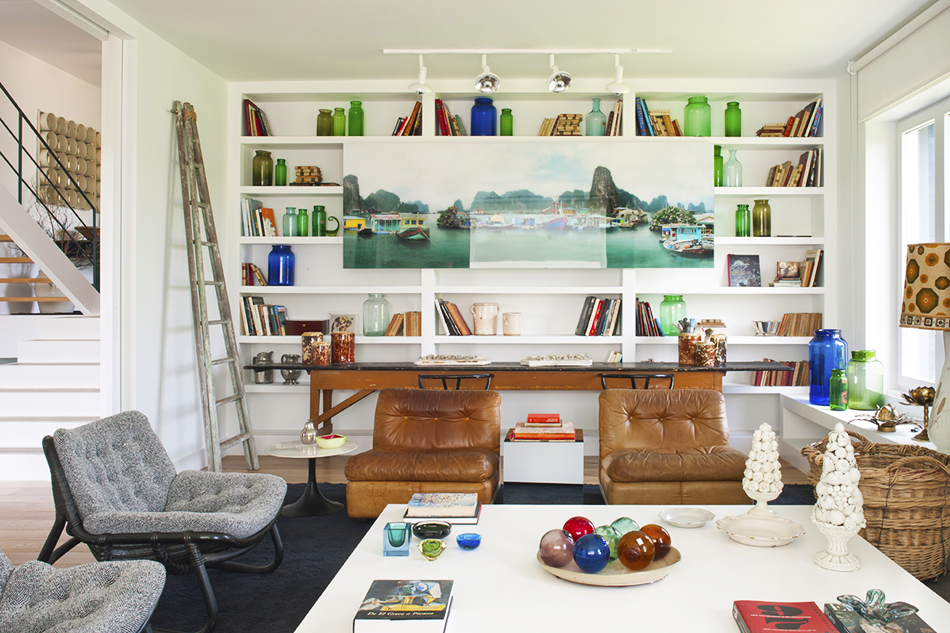 A striking photograph by Dionisio González hangs in the living room of a home in Comillas, in northern Spain. Lladó sourced the 19th-century white ceramic pieces on the table from Manises, a region of Spain famous for its pottery. 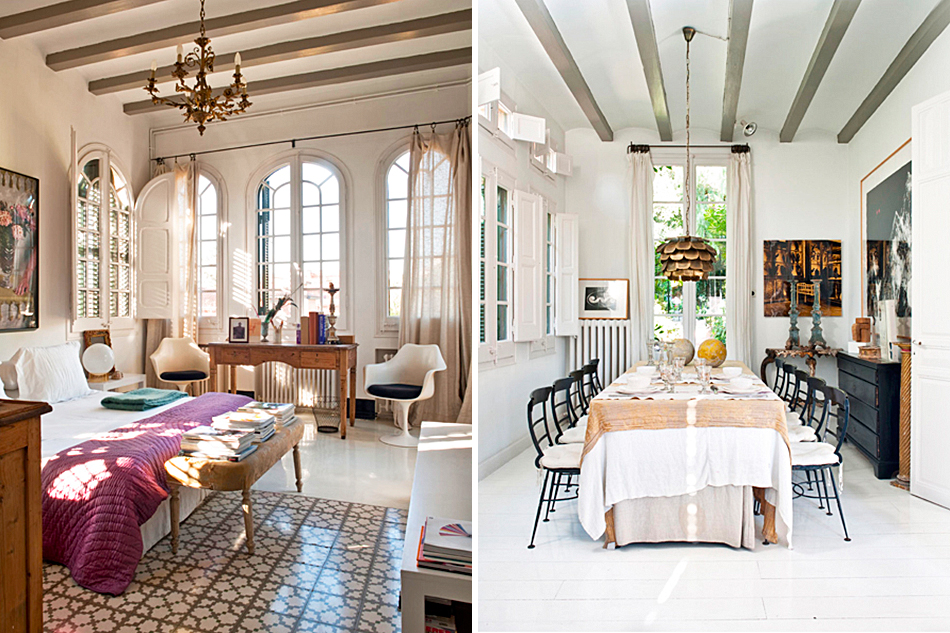 Left: The airy master bedroom in Lladó’s home features a lamp she found in Barcelona’s Los Encantes flea market, vintage Saarinen Tulip chairs, a photograph hanging over the bed by Miguel Angel Gaüeca and bedside tables of her own design. Right: In the designer’s own home in St. Just Desvern, outside Barcelona, chairs from her grandparents’ garden surround the dining table. The brass chandelier above the table and the candlesticks at right are both from Florence and date from the 17th century.ARE WE SURE CHANDELIER IS 17th-century? 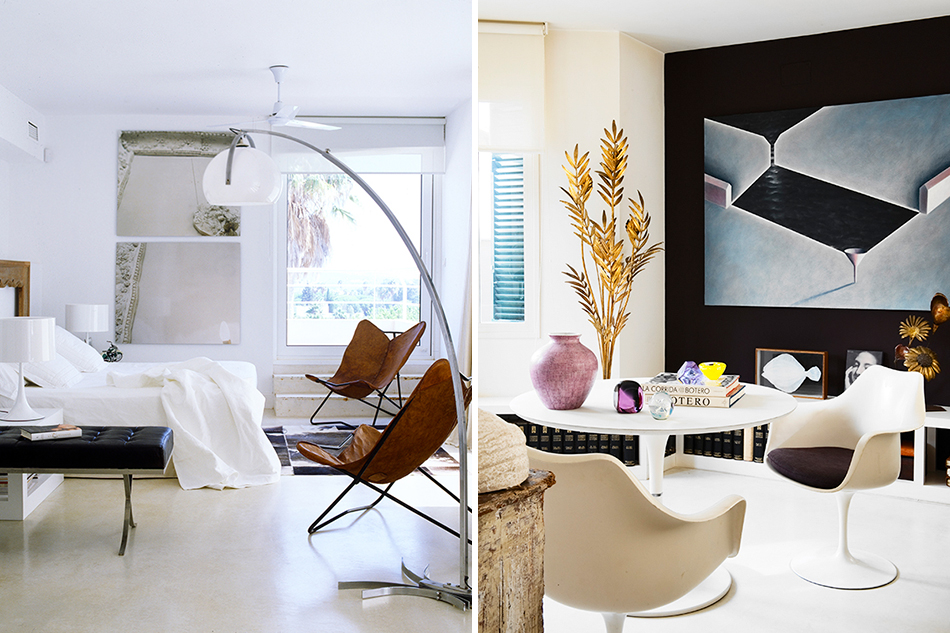 Left: In the bedroom of a house in the exclusive Andalusian enclave of Sotogrande, the designer created a headboard from a 16th-century French fireplace mantel. The leather butterfly chairs are from the 1960s and the photographs are by Jacobo Castellanos. Right: The smooth shapes of Saarinen furniture play off the lines of a painting by Antonio Rojas in a Madrid home. On the table sits a Murano ashtray and an Italian ceramic vase from the 1930s. 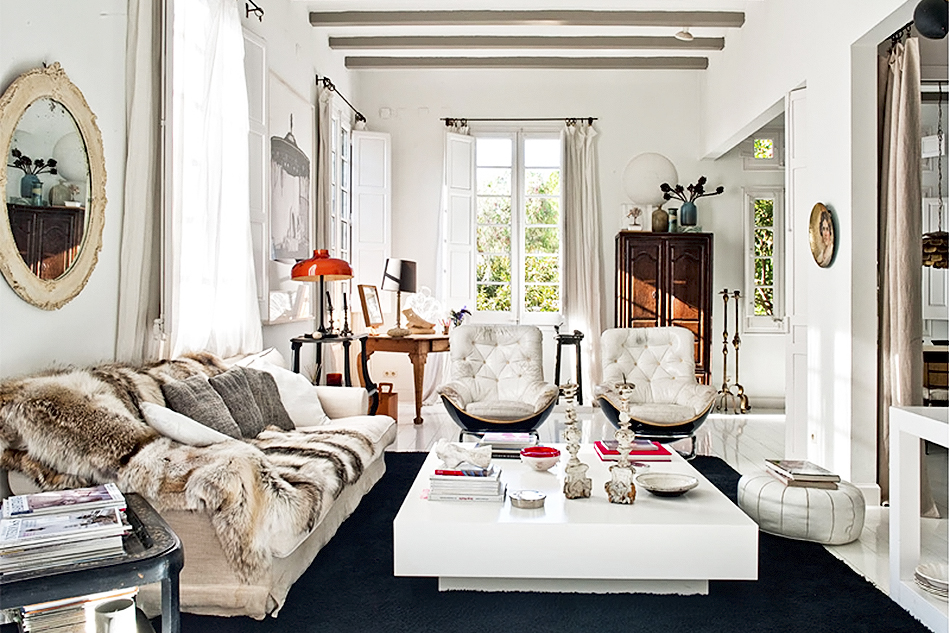 Lladó designed the sofa and table in her living room and added 1950s leather armchairs she found in France, a leather pouf from Morocco and a 20th-century cupboard from the sacristy of a church. 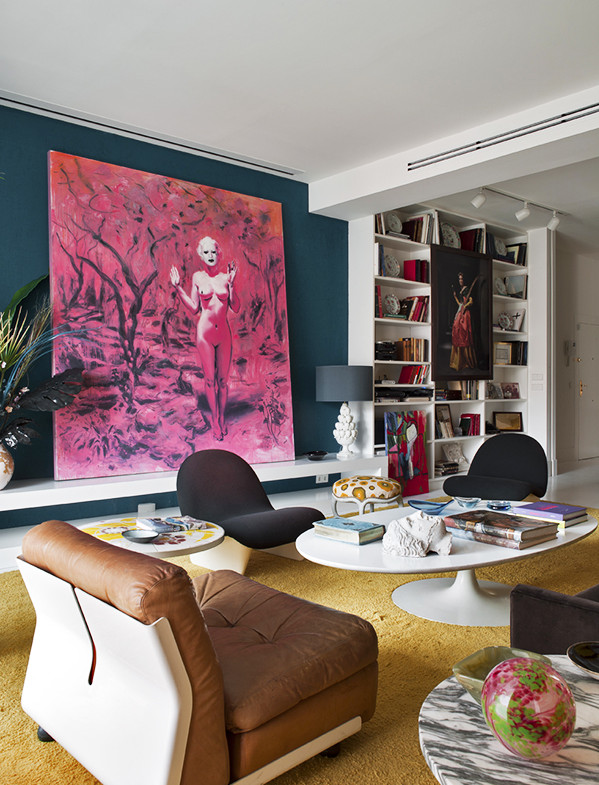 Another dramatic painting, this one by Philip Jones, is the focal point of a Madrid living room, about which the designer says she wanted to conjure the feeling of “enjoying a very relaxing cup of coffee in the Plaza Mayor.” The photograph hanging in front of the bookshelves is by Erwin Olaf.

The daughter of Jose Lladó Fernandez-Urrutia, a former Spanish ambassador to the United States who is a trustee of the Reina Sofia Museum in Madrid, Lladó spent her high school years in Washington, D.C., where she took art courses at the Corcoran College of Art and Design. An intense interest in art ran in her family: Her grandparents collected international contemporary works as well as Old Master paintings so she became familiar with these genres at an early age. Back home in Madrid, she studied graphics at the School of Arts and Photography and later in London, at Central Saint Martins College of Arts and Design. After school, she joined the advertising agency BBDO in Madrid, where she eventually became a creative director, looking after such clients as Chivas Regal, Pepsi and multinational oil and gas giant Repsol. “I loved to play with spaces,” she says. “I liked to set up scenes for photographs.”

Unaware of where her talents would lead, she bought her house in 1995, tackling almost the entire renovation herself, refinishing surfaces, putting down tiles, doing carpentry and painting the floors, all in an effort to preserve the 1910 home’s original essence. “I put all my emotion in here,” she says, glowing, “the best of me.”

To celebrate the house’s completion, she invited around 100 friends to a party and, in preparation, treated each room like a gallery, filling every one with carefully placed art and objects for sale. And that was all people needed to start asking her to design their own homes; her first assignment was the complete overhaul of a small palace in Barcelona. Before long, she had bid farewell to advertising and thrown herself entirely into designing interiors — never on a computer or with plans, but always simply using her imagination. 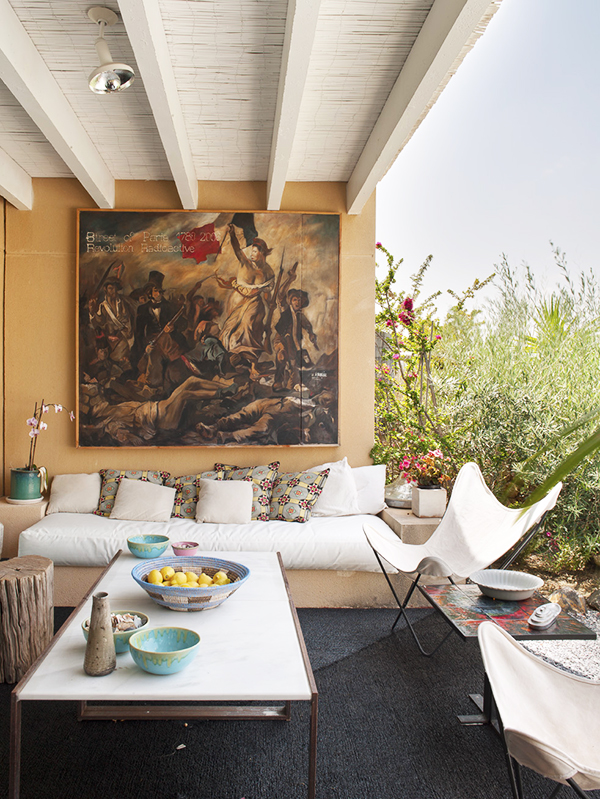 A contemporary take by the painter Arnaud on a classic Eugene Delacroix painting of the French Revolution hangs in the indoor-outdoor living room of a house in the Spanish town of Almería.

Recent projects include a family apartment in Berlin, whose striking living room is dominated by a dramatic work by German photographer Elger Esser depicting waves crashing on the shore. The designer complemented it with a blue rug, dark green walls and a white Eero Saarinen Ball chair. For a bachelor’s apartment in Madrid, meanwhile, Lladó choose brown leather and black curving chairs from the 1950s and ’60s and a large white Saarinen coffee table from the same period. She explains that she wanted the atmosphere to conjure the feeling of “enjoying a very relaxing cup of coffee in the Plaza Mayor,” one of Madrid’s most elegant and popular public squares.

For a house in the Spanish beach resort of Sotogrande, she created a wide open white deck looking out to the beach and decorated the wall behind it with brightly colored tiles. In every room, Lladó exhibits an extraordinary ability to choose just the right piece of art and just the right colors to enliven a space. In the living room, for example, she used white floors, diaphanous draperies and oversize couches to set off an other-worldly photograph by Spanish artist Dionisio González, which depicts the unusual houseboats dotting Ha Long Bay, in Vietnam.

Such is the case, too, in her own St. Just Desvern home, into whose garden Lladó leads me before our afternoon together draws to a close. As her dog trots beside us, and parrots chatter in cages hung from the trees, we wander along a gravel path toward a long graceful swimming pool bordered by lemon trees and a cabana. “I designed the garden to remind me of my grandparents’ house in San Sebastian,” she says of the outdoor space, which overflows with geraniums, fruit trees, roses, laurel and aspidistras. “I spent all my childhood summers there.”

The garden’s white lace-patterned furniture adds to the turn-of-the-20th-century atmosphere. “Oh, how I wish I could spend more time here,” she says longingly, walking back to the house to prepare for the drive into Barcelona to meet with a client. But, she adds, “I never complain. I hardly ever think of what I do as work. It’s more like play, a hobby. It’s always fun.” 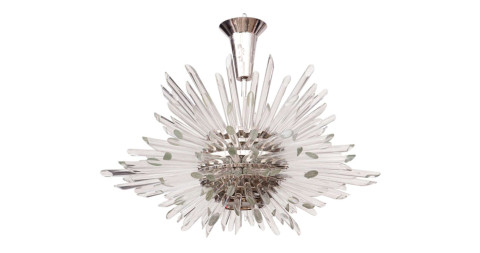 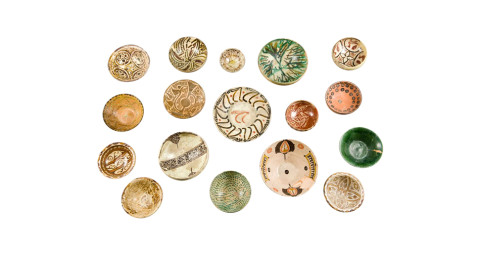 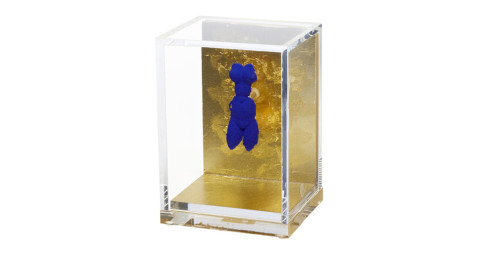 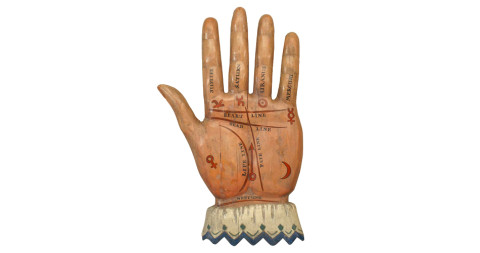 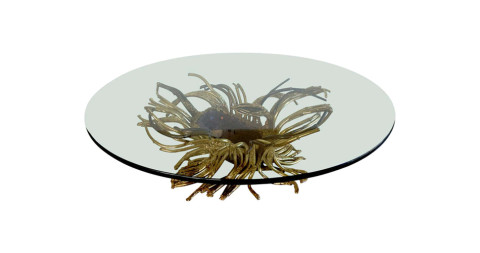 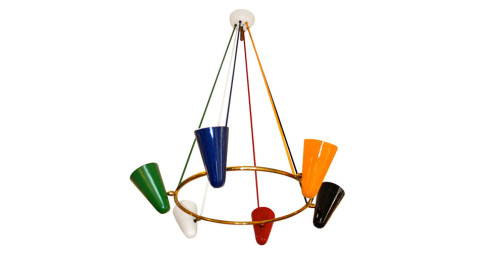