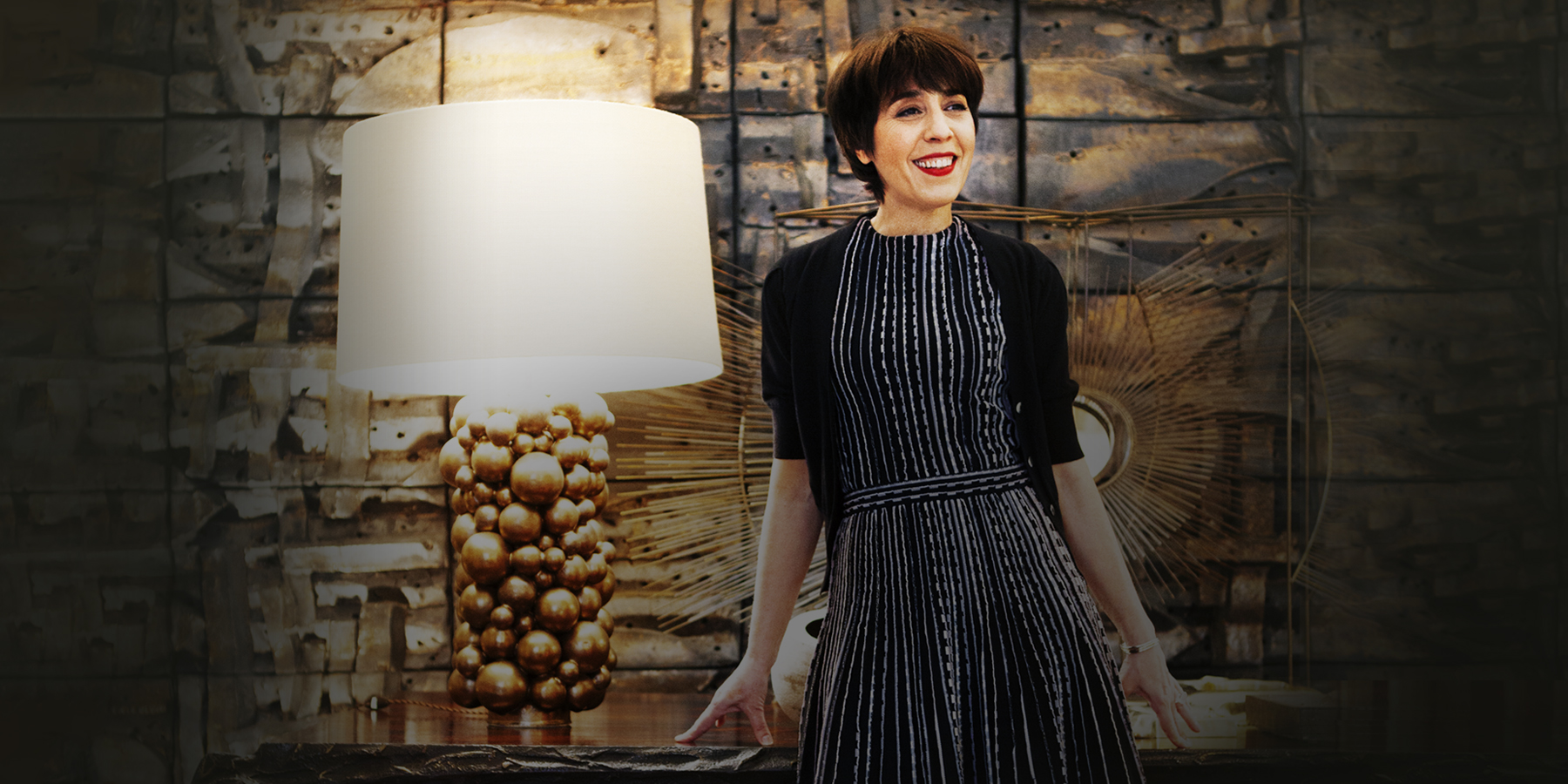 With her artistic eye and intellectual approach, the gamine editor in chief of Architectural Digest France is pushing the decoration magazine into more sophisticated territory. 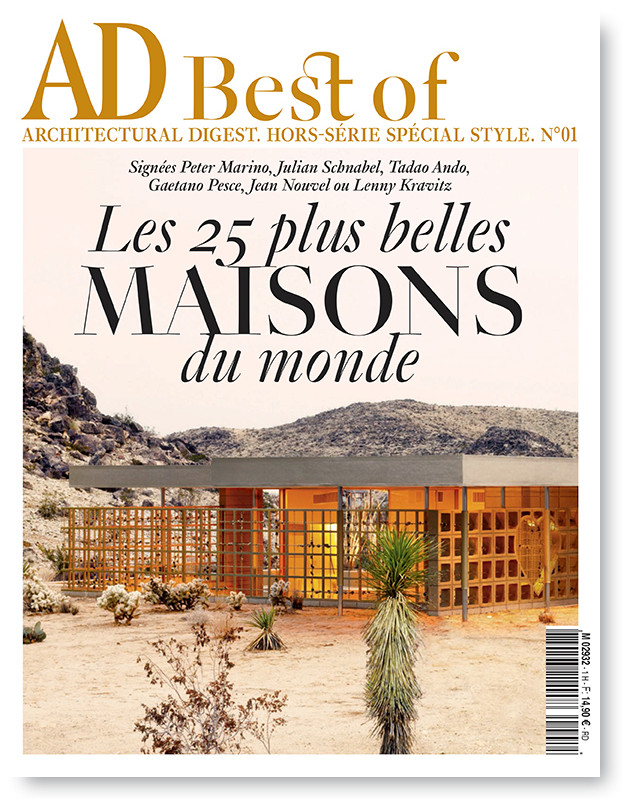 Top: Marie Kalt, the editor in chief of Architectural Digest France, in the
Paris gallery of Chahan Minassian (© Alexis Armanet). Above: Kalt has innovated by creating special “Best Of” issues, such as this one dedicated to “The Most Beautiful Homes in the World” (photo © Raimond Koch).

When Marie Kalt was named editor in chief of Architectural Digest France in 2008, she was already a highly respected publishing figure with 25 years of experience in the profession. But when I meet her in the magazine’s offices, near Faubourg Saint-Honoré, one recent spring afternoon, she looks more the ingénue than the veteran, wearing her dark hair in a gamine coif and sporting a vivid green-and-blue skirt. This, it turns out, is of her own design, in what she describes as a “vintage fifties couture fabric.” All told, this slim, chic and charming Parisienne has brought a gust of fresh air to one of the French decorating world’s most prestigious titles — not only in terms of style but also substance.

The challenge wasn’t to change AD,” she says as we begin our talk. “It has its DNA, and that was to be respected. AD worldwide has always been a reference, but the French edition was maybe a bit cold and distant. The idea was to liven it up.”

Five years on, AD has hopped out of its corset and today, a scintillating mix of stories — which includes, in Kalt’s words, “the cutting edge and the experimental, the patrimonial, the extravagant and the modern classic” — fills its pages. “Each time it’s different,” she continues, “but with a common denominator of quality.” 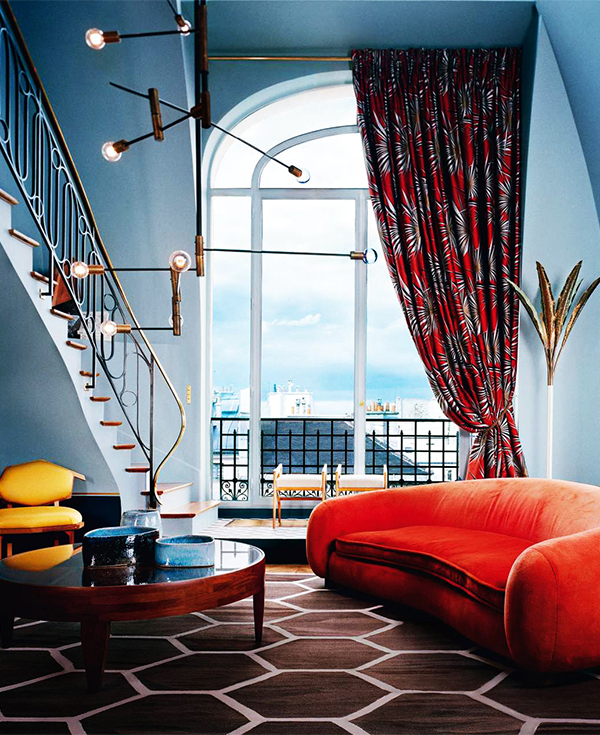 Milan design duo Dimore Studio’s masterful mix of classic and
contemporary elements in a Saint-Germain-des-Prés duplex made the cover of an AD tribute to beautiful Paris apartments. © Mai-Linh

In one recent issue, which highlighted beautiful Paris apartments, le style AD à la Kalt flips from coolly elegant minimalism to paneled old-world splendor and back again. And that’s just within one collector’s spectacular contemporary art-studded apartment, designed by ultra-hot Parisian talent Chahan Minassian. A few pages on, a story on the home of Marc and Daisy Maison, 19th-century aficionados and antiquaries, proves an eye-popping tribute to their gout flamboyant, from a neo-Gothic bronze ceiling and an oversize stained-glass scene of Anthony meeting Cleopatra to a domed throne and a monumental sculpted dark-wood balcony and fireplace.

In the same issue, the Milan design duo Dimore Studio combines mid-century masters (an Ours Polaire sofa and armchairs by Jean Royère here, a Giò Ponti coffee table there) with their wholly 21st-century XXL linear suspension light in a stunning Saint-Germain–des-Prés duplex.

My formation was empiric,” Kalt says, explaining her inevitable attraction to decoration and design. “My father is an architect and my stepmother a fashion stylist. I married an architect, and my brother is one, too.” And so, after receiving a master’s degree in English (which she speaks with an impeccable accent) and working for a spell as assistant to French fashion diva Chantal Thomass, Kalt found a job in the 1980s as a stylist for the design-forward magazine Maison Française.

That kicked off a styling career that included stints with Elle Décoration and the American editions of House & Garden and Travel + Leisure, which preceded her 12 years at Marie Claire Maison, where she rose through the ranks to become editor-in-chief and editorial director.

Given her professional history, I can’t help asking if having an inside view on her rivals has given her an advantage since coming to AD. “I don’t know about advantage,” she says. “But at the beginning, it was an exercise for me. The biggest contrast was between Marie Claire Maison and AD. MCM was easy to imagine. Its creed is to show people how they could be their own decorators. The ideas and inspirations came from what we editors wanted and needed in our own lives. We were the consumers, the readers and the actors.”

AD was a leap to another audience. “For me, it was another world,” she says. “Other magazines are addressing the ninety-five percent of home owners. We address the five percent with the highest incomes, who have the means to hire decorators and architects,” she emphasizes. “They are collectors of furniture, of objects, of artworks, people who travel, take the train or plane one morning to Maastricht or London or New York for an auction.”

To fulfill the expectations of this cultivated readership, she has bumped up the magazine’s front-of-book coverage of design and art to the point where “our cultural stories make up more than one-third of the magazine,” she says. 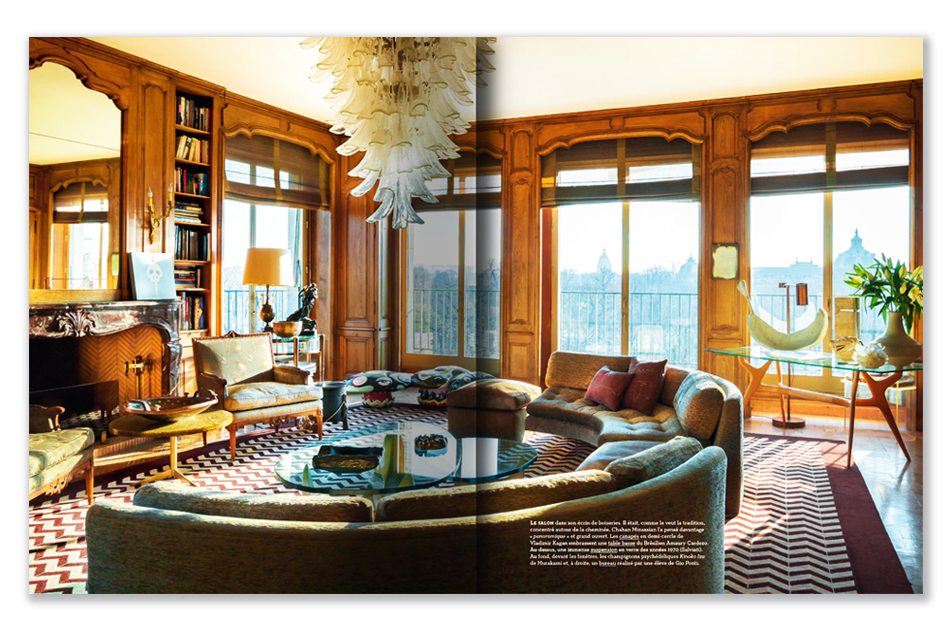 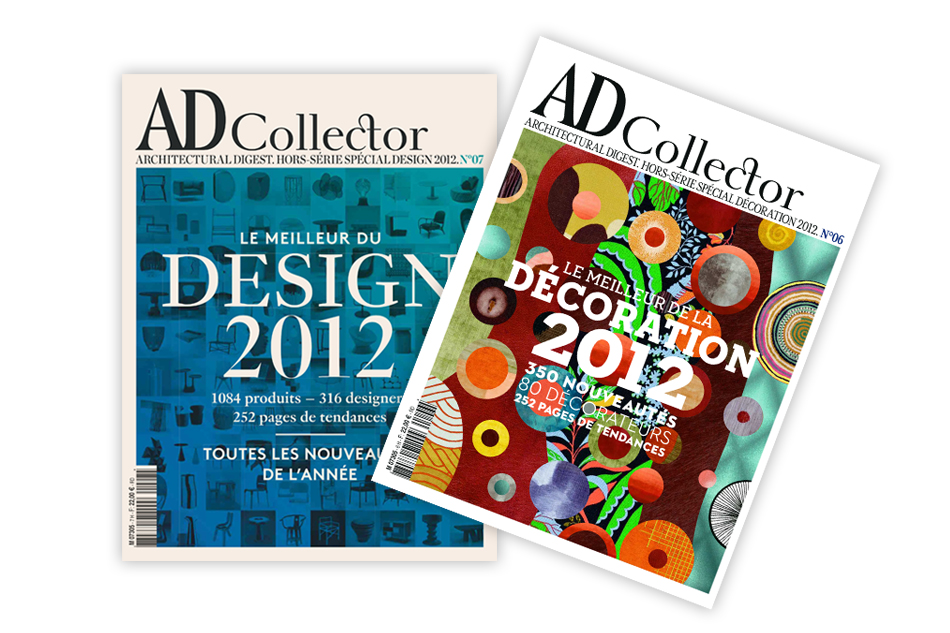 In another initiative, Kalt created two annual 250-page
special issues: one on “Decoration,” with an illustrated decorator directory, and a second on “Design,” featuring new furniture and a list of “Designers Who Count.” 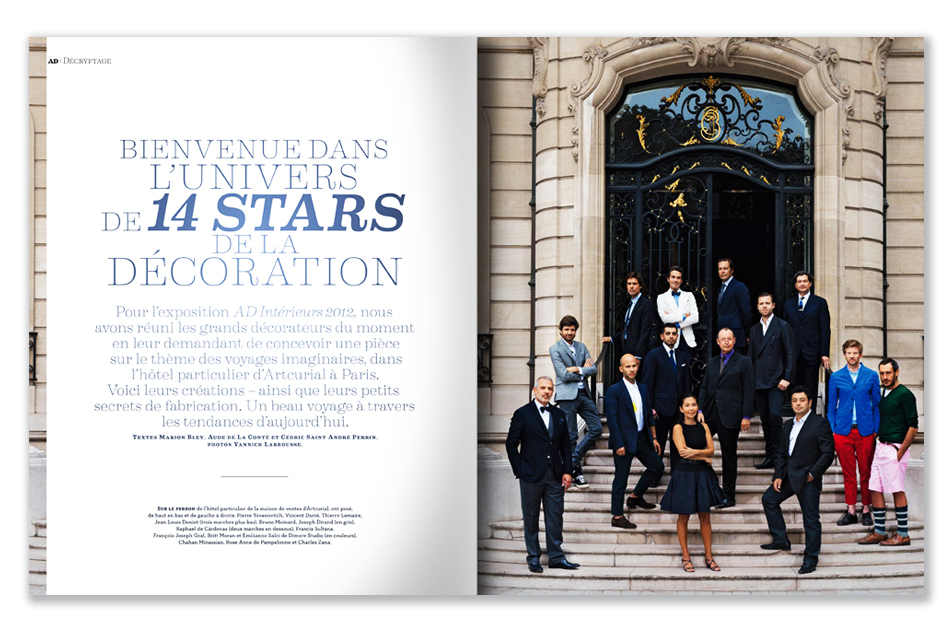 The 14 interior designers who created rooms for the AD Intérieurs 2012 show house posed on the steps of auction house Artcurial, the exhibition venue. © Yannick Labrousse 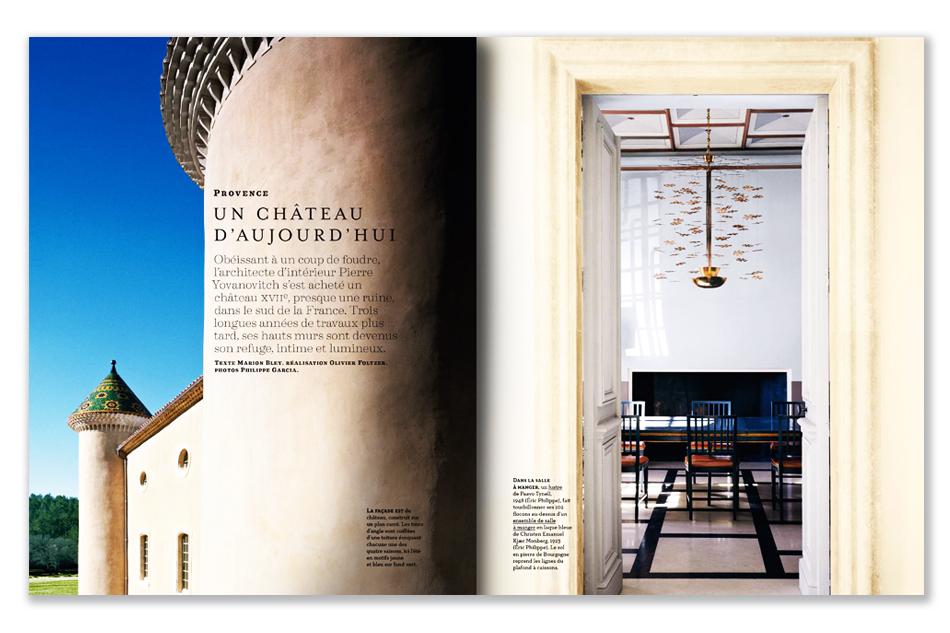 A view of the dining room, at far right, of Pierre Yovanovitch’s 17th-century chateau in the South of France shows a blue lacquer table from 1923 and chairs by Christen Emanuel and Kjaer Monberg. © Philippe Garcia 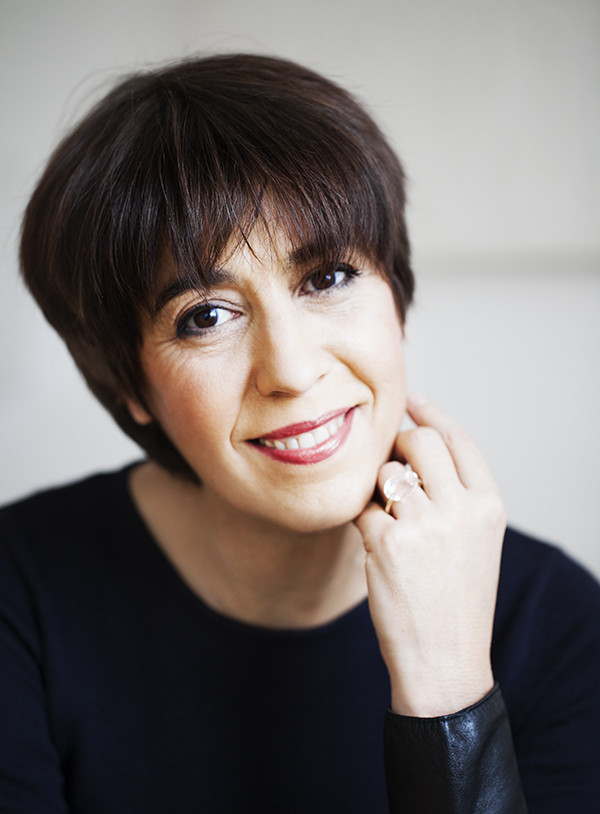 Kalt arrived at AD with 25 years of experience in the magazine industry, but her move there still meant a leap to a whole new audience.

“Marie has definitely pushed the magazine into more sophistication and upgraded the quality,” says Patrick Perrin, the co-founder and CEO of the annual Pavillon des Arts et du Design (PAD) in London and in Paris, which AD sponsors. “She doesn’t just show beautiful houses; she takes a more intellectual and aesthetic point of view, educating and stimulating people into collecting, which is important for her readers. AD is definitely now the French-language decoration magazine.”

To further AD’s reach, Kalt introduced two annual, 250-page bilingual (French-English) special editions, one on decoration, with a user-friendly decorator directory, the other on design listing the “Designers Who Count” and their latest furniture creations. And to support top interior talents whose high-flying clients are increasingly reluctant to let their homes be photographed, she launched AD Intérieures, an annual, real-life showcase of their work. In this September’s version, 15 designers will transform the rooms of the spectacular 17th-century Hôtel de Miramion, opposite Notre Dame. (As in years past, there will be a printed guide to the projects shown.)

Kalt takes a down-to-earth approach to high-profile content. “Marie is a real ‘editor,’ ” says Minassian. “She scouts, finds, entertains and edits with a real vision of our time.” Paris-based modern-surrealist designer Vincent Darré, meanwhile, appreciates her carte blanche confidence in the decorators’ schemes “even when, as in my case, the project is so eccentric, one could tremble,” he contends. “She innovates and yet recreates the kind of decorative arts exhibitions of the thirties. Marie brings unlimited curiosity and an energy that makes her magazine unique.” 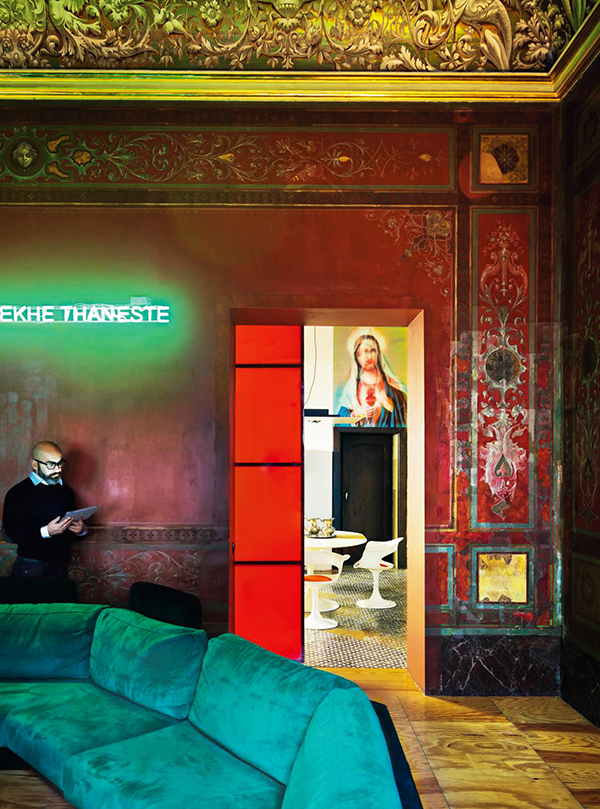 The inclusion in AD of the Naples “Red Salon” of architect Antonio G. Martiniello — where a maxi-divan and contemporary neon artwork contrast with the palatial frescoed ceiling — demonstrates Kalt’s affinity for the quirky. © Jérôme Galland

“Because I’m one of the few editors-in-chief who came to magazines as a stylist rather than a journalist, the visual dimension comes first at AD,” explains Kalt, who still styles many of the magazine’s features. “What we are trying to communicate is our ‘impressionist’ approach. When the reader opens the pages, we want to transmit the aesthetic emotion of what it is like to be there, rather than just to relate the purely descriptive story of the house.”

Two stories included in a special 2012 issue — an instant collector’s item guest-edited by no less an aesthete than Chanel creative director Karl Lagerfeld ­— provide perfect examples. The opening pages of a piece on a château in the South of France, saved from ruin by its owner, the young French designer Pierre Yovanovitch, feature an angled close-up of two of its 17th-century towers (as opposed to the expected full-frontal view) beside a photo of an open door that reveals the home’s dining room beyond. “These two images are like a summary of Pierre’s style,” Kalt remarks. “They show it still retains the human dimension.”

Elsewhere in the issue, a spread showing off a maxi-divan in a palatial frescoed Naples apartment — entirely furnished with contemporary art and design — conveys exactly the opposite: “It has huge proportions; the ceiling is ten meters high,” she recounts. “It’s been storyboarded like a film and is a rather quirky piece,” Kalt continues: “AD France is different now — it was never quirky before. That’s my take.”

So, does quirk reign at home, too, one wonders? Apparently not. “It’s very simple,” Kalt says of her Paris abode, a 19th-century apartment in Saint-Germain-des-Prés. “I haven’t done much. It’s all white: sofas, tables, lights, walls. Even the kitchen is white marble. It’s not spectacular — no art pieces; it couldn’t be featured in AD. I get so many impressions of other people’s houses at the magazine, I’m happy to have a quiet space to relax.”