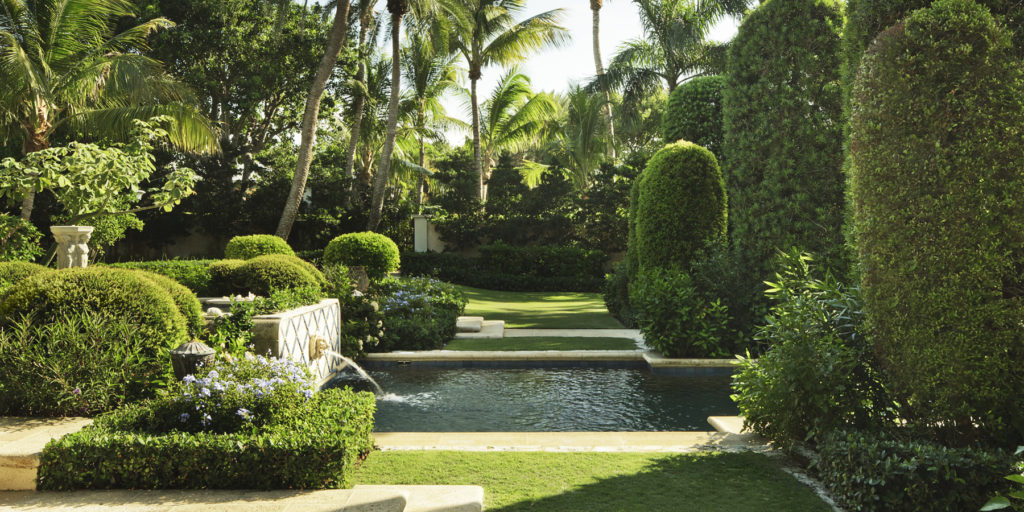 The landscape designer has a gift for luring even the most cosseted homebodies into the great outdoors, from Palm Beach to East Hampton. 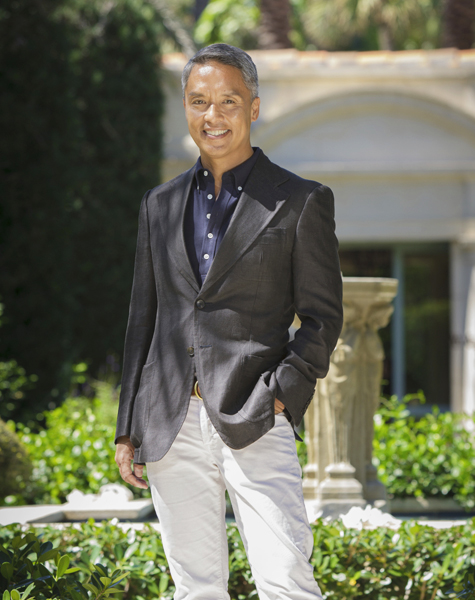 June 13, 2016From his headquarters in Palm Beach, landscape designer Mario Nievera creates lushly layered gardens across southeast Florida and beyond. Top: Nievera integrated a pool, steps, walkways and terraces with shrubs, trees and ground covers into a Mediterranean Revival–style Palm Beach house from the 1920s, so that the manmade materials seem to grow out of the natural surroundings. All photos by Michael Stavaridis

The landscape designer Mario Nievera is based in Palm Beach, Florida. He also spends a lot of time in New York City and East Hampton, where he keeps a house. But the American Midwest plays a prominent role in his life story. Indeed, the key to his success — and he’s had considerable amounts of it — may be his upbringing in Chicago’s northern suburbs and his education at Purdue University, in Indiana. For as lavish and layered as his landscapes are, whether tropical or temperate, there’s a plain-spoken and clear-eyed Midwestern sensibility in the way he tackles projects, goals firmly in mind.

Working with his business partner, Keith Williams, and a team of 16 people at their firm, Nievera Williams, Nievera specializes in residential projects, a large chunk of them in southeast Florida. These days, he has more work than he can handle — no cold calls, please.

“What we do is very personal,” says Nievera, 51, who is chatty and warm, with a wide, frequently flashed smile. “We try to get to know our clients so that we can create a landscape that suits them. We don’t want our gardens to look the same, one from the next.”

That versatility is on full display in Forever Green, the book of Nievera’s work that Pointed Leaf Press published a few years back. Divided into sections with such evocative titles as “Layered,” “Ordered,” “Bucolic” and “Spiritual,” it shows off his particular knack for creating varied textures with plants.

Nievera has a strong sense of what landscape design means in relation to architecture. “We try to work with the architect and the interior designer to create a cohesive whole,” he says, referring to collaborators who have included Ferguson & Shamamian, Bunny Williams, David Kleinberg, Peter Marino and Victoria Hagan. 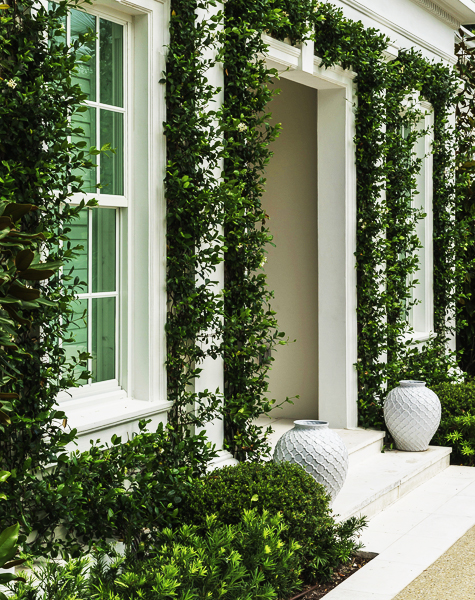 Context is everything for Nievera. “You know, the outside is the last room of the house,” he says. “You are reminded about where you just came out of, and you are looking ahead at the landscape and the sky and the earth. It all comes together at that point.”

It certainly came together well at a Miami Beach mansion on the Intracoastal Waterway: the former Carl G. Fisher estate, built by architect August Geiger in 1927. Created for one of the founders of Miami Beach — who is also the man that gave his name to Fisher Island — the home sits on two acres, an unusually large property for the area. According to Nievera, scale was the challenge here, not only that of the lot and the house (with its towering concrete quasi-campanile, intended to withstand hurricane winds) but also that of a single, massive old banyan tree in front of the home that threatened to dominate everything else.

“The task was to make the house fold and fall into its landscape so that you never felt that it was overwhelming,” Nievera says. “I felt like we needed to make a decent setting where a family could live and entertain.”

So he added hundreds of native gumbo-limbo trees and Canary Island date palms. They fill in the higher sight lines with greenery, and evergreen Eugenia shrubs bolster the lower realms. Carefully pruned beds of boxwood and jasmine help create the textured richness Nievera is known for. “We planted everything in a linear fashion,” he says. “We had very few curves. No fleurs-de-lis, no patterns, nothing fancy. It had to have a modern feel.” 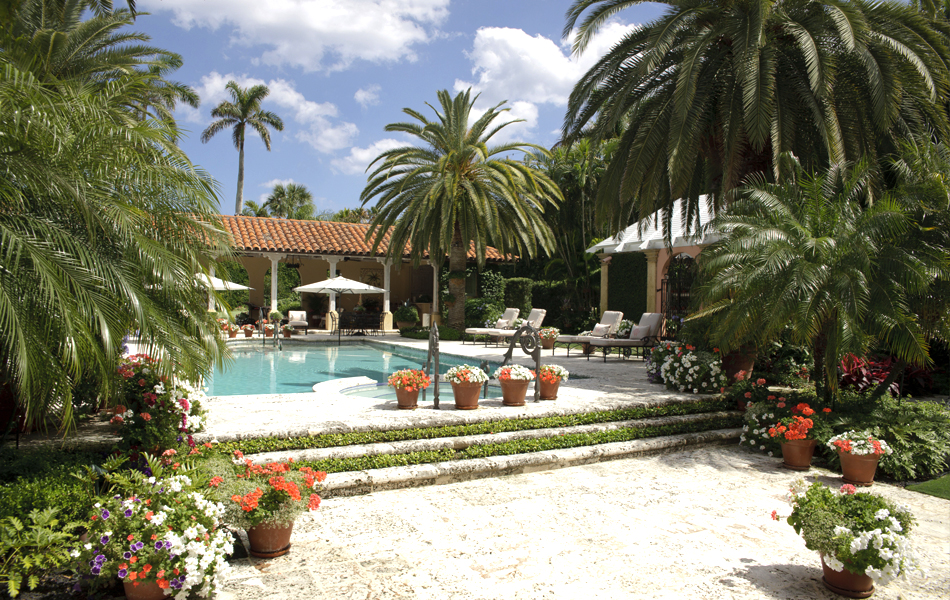 At the 1920s Mediterranean Revival–style home, date palms and flower-filled terra-cotta pots frame the steps leading from the house to the pool area. 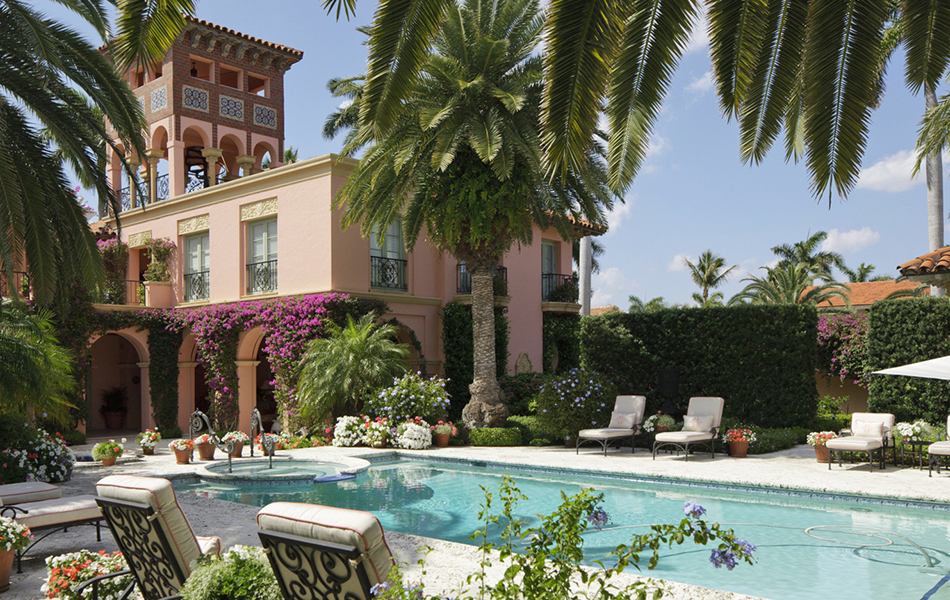 Nievera’s scheme feels completely in keeping with the home’s original architecture, which was updated by Jeffery W. Smith. 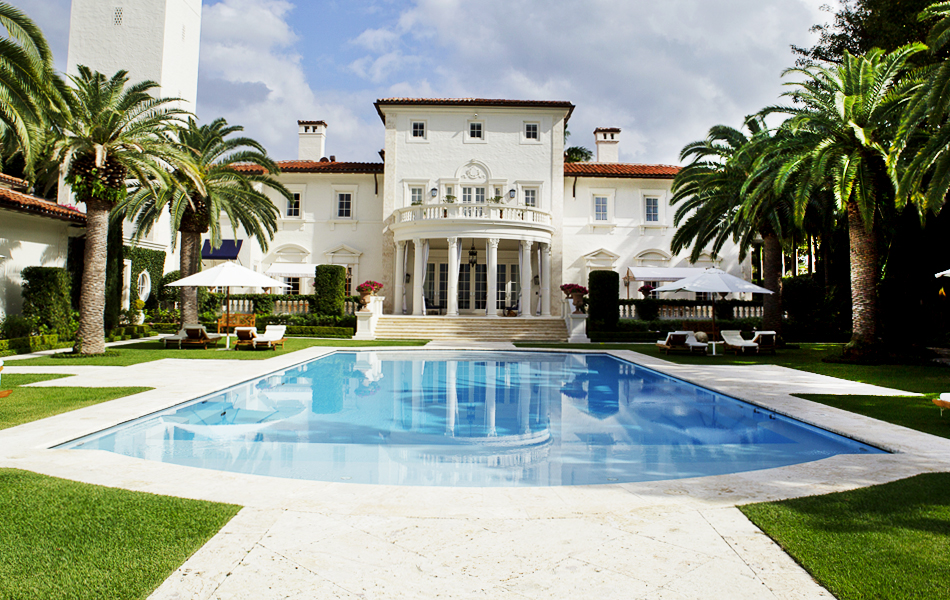 Nievera designed a grand pool and majestic landscaping for the new owners of the former Carl G. Fisher estate, a historic mansion on the Intracoastal Waterway in Miami Beach. 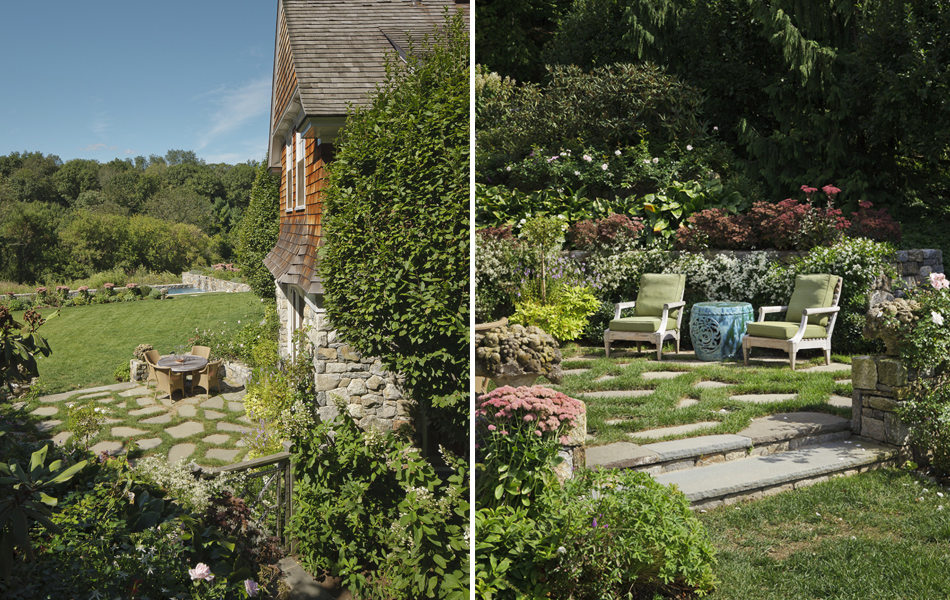 Working well beyond Florida, and in an entirely different idiom, Nievera created flowing gardens for a shingle-style Connecticut country house surrounded by a nature preserve. 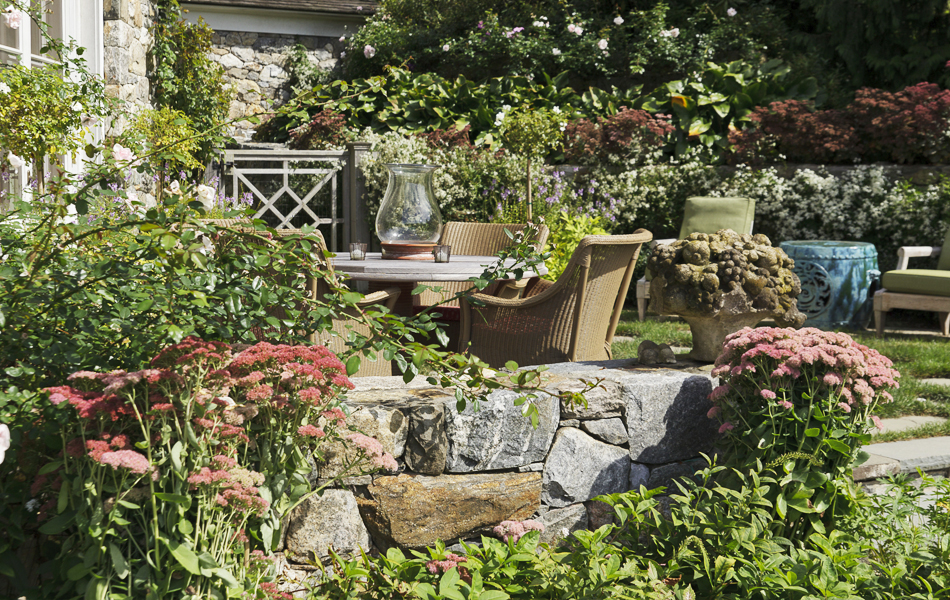 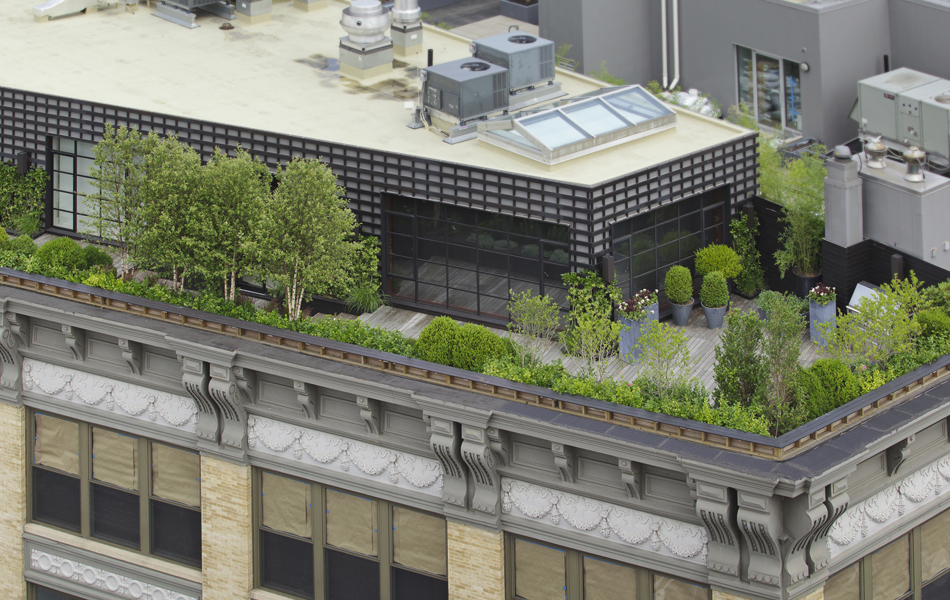 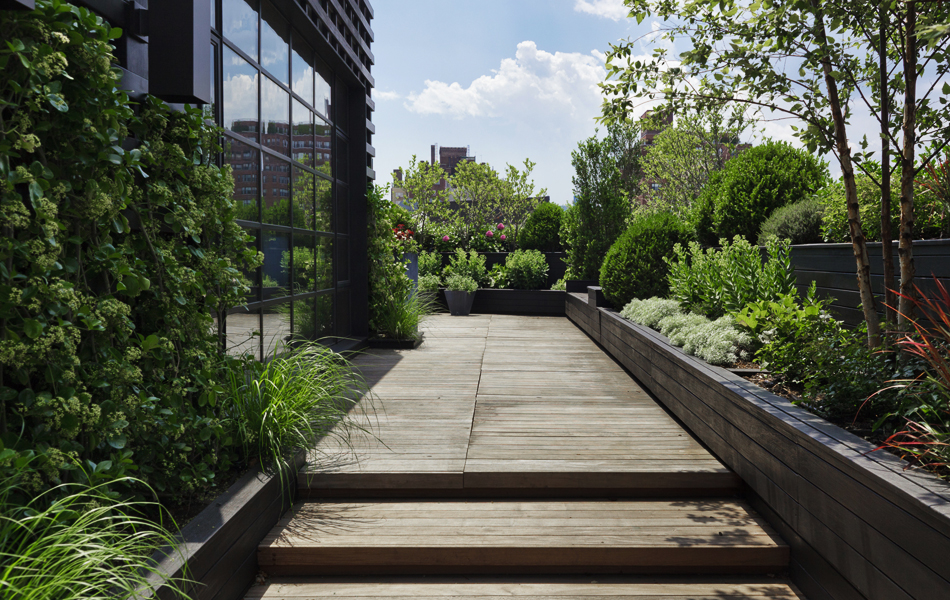 For the Meatpacking District penthouse, Nievera had the terraces, walls and steps all constructed from durable Brazilian hardwood. 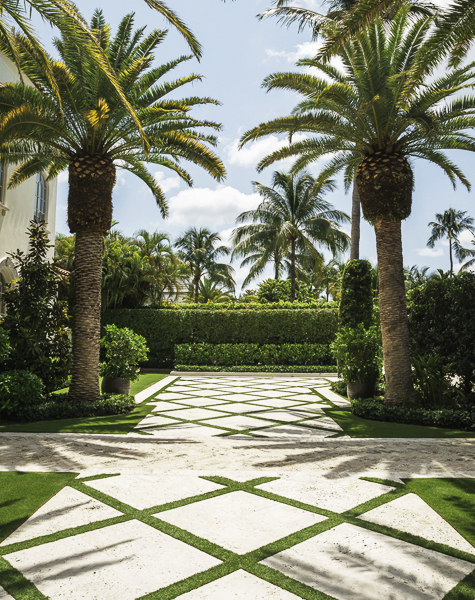 Nievera’s designs can be as practical as they are aesthetically pleasing. Here, at another Palm Beach home, the diagonally laid cast-stone pavers can withstand the weight of vehicles, while the zoysia grass between the stones can handle heavy traffic.

Just up the coast, in Palm Beach, Nievera worked with architect Jeffery W. Smith on the grounds of a peach-hued Mediterranean Revival–style house also from the 1920s. Here, he did away with the old pool, replacing it with a new one located within an entrance courtyard and surrounded with palms to create interesting shadows on the water. Then, he transformed a narrow side yard that most people would ignore into a series of secluded garden rooms paved in brick. Boxes of white impatiens separate several seating areas.

“The owner is a gardener, so it’s all about giving her opportunities to indulge her hobby,” says Nievera. “There are a lot of courtyards, and she wanted a sort of Palm Beach–European feeling.” Bougainvillea is everywhere, because it blooms year-round and adds lots of color.

Although he’s best known for his tropical Floridian work, Nievera is able to tackle other climates as well. (Forever Green features two appendices, “Plant Guide: North” and “Plant Guide: South.”) “Like any good horticultural type, I’m interested in everything,” says Nievera, who does regular work in New England and the New York area. “Being raised in a more northern climate, I’m accustomed to the horticulture, the botany of the Northern Hemisphere.” 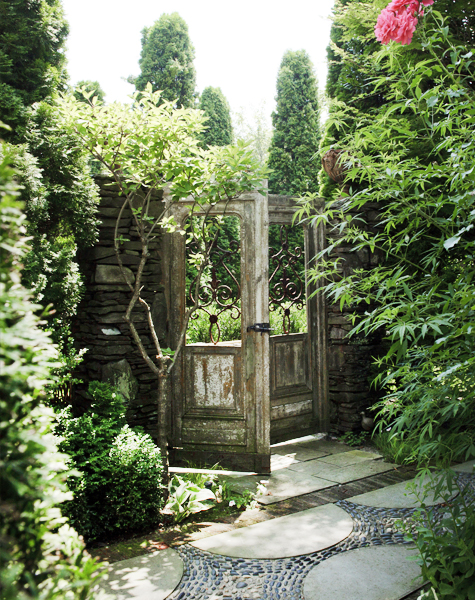 “The client had the salvaged gate,” explains Nievera, referring to this Southampton project, “so we created the garden wall to accept it.” The terrace’s unique paving is composed of bluestone with a mosaic of black river rock pebbles.

A shingle-style house in Connecticut surrounded by a nature preserve required him to dig into his non-tropical toolkit. “The architect came up with a brilliant design for how the house fits into the site, and all we had to do was help nestle it into the hillside,” he says. Classic New England stone walls, of the type Robert Frost writes about in his poem “Mending Walls,” were part of the answer.

“Anybody else would have made the walls very prominent,” says Nievera, contrasting his work to that of other landscape designers. “We wanted the walls to recede a little here. It’s not a fortress.”

The Mexican architect Luis Barragán’s signature wall arrangements inspired the stone partition that forms one edge of the outdoor pool — Nievera likes how the stones appear to be cascading into the water. Native grasses, clematis and hydrangeas give the overall scheme a slightly wild look. By the patio behind the house, roses and other perennials flourish.

There’s an English air to this Connecticut project, so it’s no surprise that Nievera especially reveres the great British landscape designer Russell Page (1906–85). “He really appreciated plants,” says Nievera. “When you experience his gardens and his work, you can see how he understood plants and how he manipulated them to his advantage.”

When he can, Nievera attends to his own 1940s Cape-style East Hampton house, which he bought in 2010 from a friend who had recently renovated it. “It’s a lot like the shoes of the shoemaker’s son,” he says, laughing, of the always-in-progress property. “No one ever really finishes his own project.”

His East Hampton house is 2,600 square feet and sits on only a third of an acre, so there aren’t endless landscaping projects. But the friend and former owner had added a row of Leyland cypress and cryptomeria trees that didn’t sit well with Nievera.

“I took down some trees, which I normally wouldn’t have done, but I was just fanatical about light,” he says. And the neighbor’s trees were much better than the ones on his property, so he enjoys the adjacent view. “That’s what you always want to try to do — create compositions that borrow from the landscape.”

Perhaps never more so than when he is his own client, Nievera has learned to trust his well-honed instincts. Sometimes that means realizing that good design is about subtraction as much as addition. “You have to be an editor,” he says. “At the end of the day, I was just like, close your eyes and do it,” he says of the tree removal. “And I was very happy.” 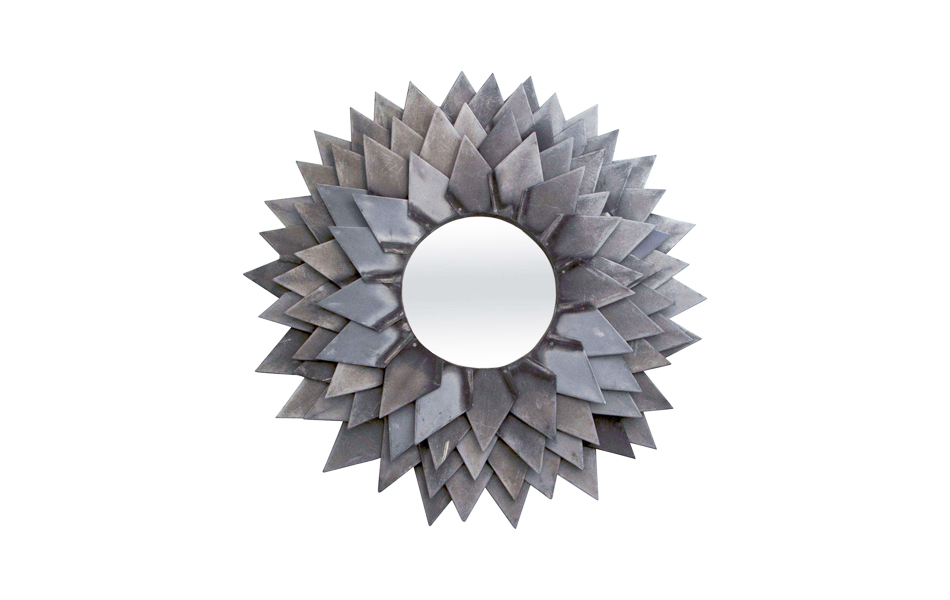 “I’m helping a great friend decorate the interiors of his Provincetown, Massachusetts, beach shack. It has a great old stone fireplace, and this mirror would work well there. I love Fleur, as it always has the most unique, well-scaled accessories and garden ornaments.” 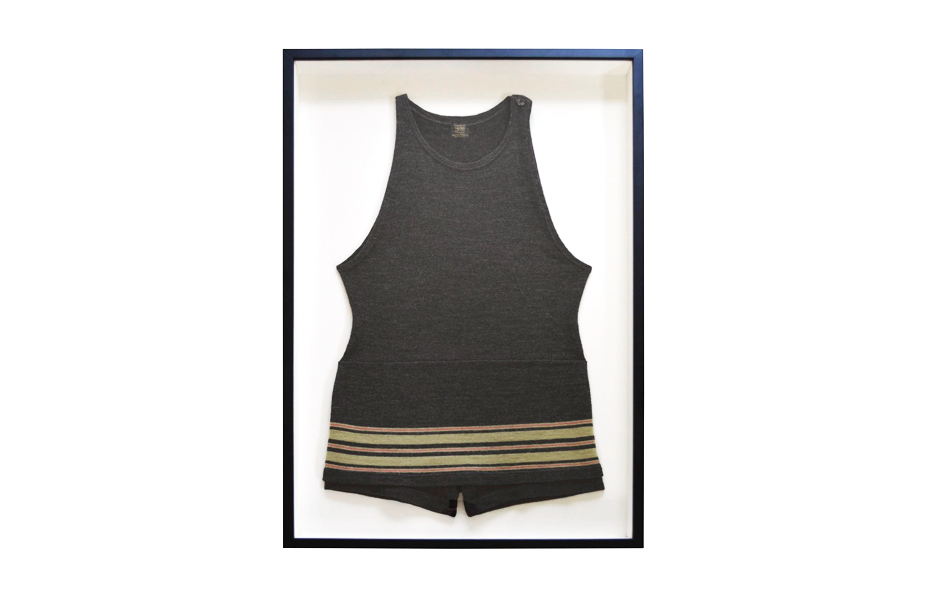 “I recently built a pool-house cabana at my place in East Hampton, and I’m constantly looking for wall art that can withstand the changes in temperature and humidity there. Plus, I like anything that has a shadow-box frame.” 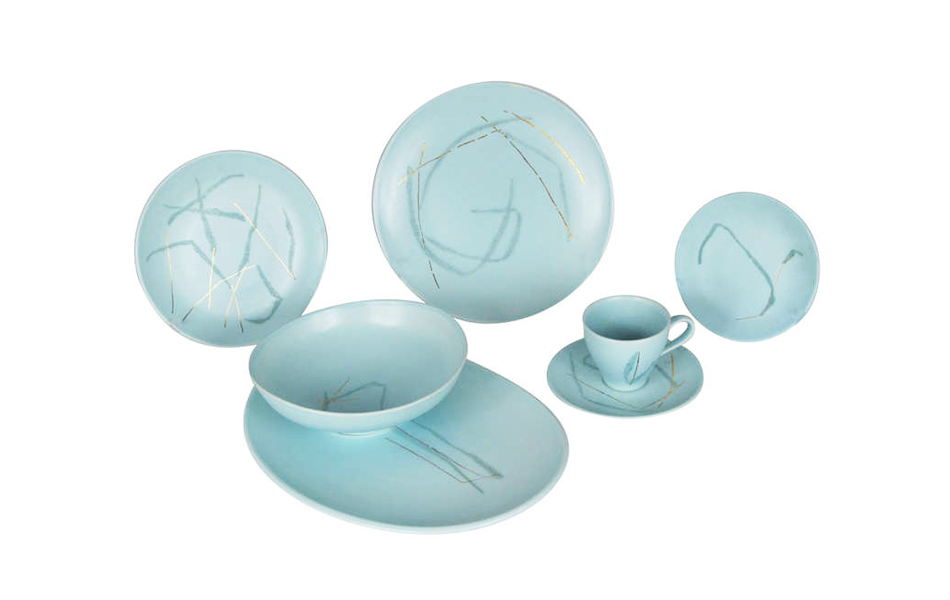 “I have a collection of Wright’s chartreuse American Modern dinnerware that I put together about 15 years ago. This is really a special line — it is just so rare.” 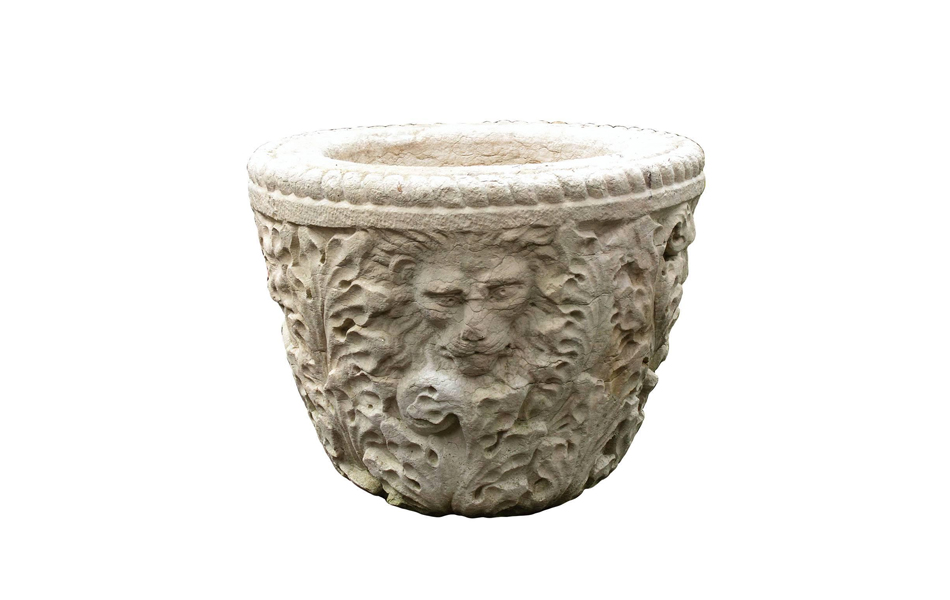 Mediterranean Revival–style architecture is prevalent in South Florida, so I’m always looking for garden ornaments that befit the landscape and exteriors. Containers like this are well priced and can also be used as fountain centerpieces. 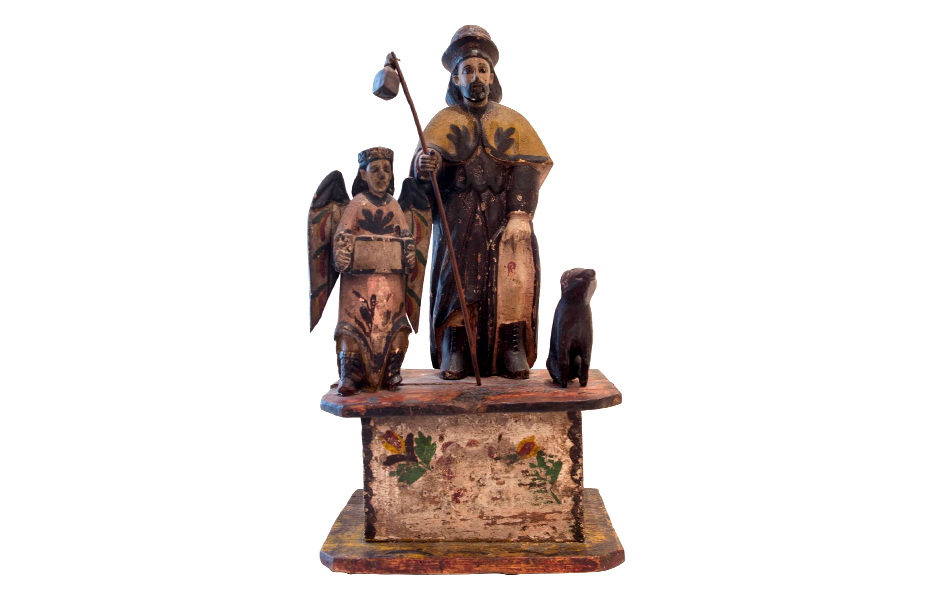 “My background is Filipino, and my parents have this amazing collection of Filipino santos statues. I started collecting my own about 10 years ago. But I’ve never seen anything like this one. I totally covet this!”