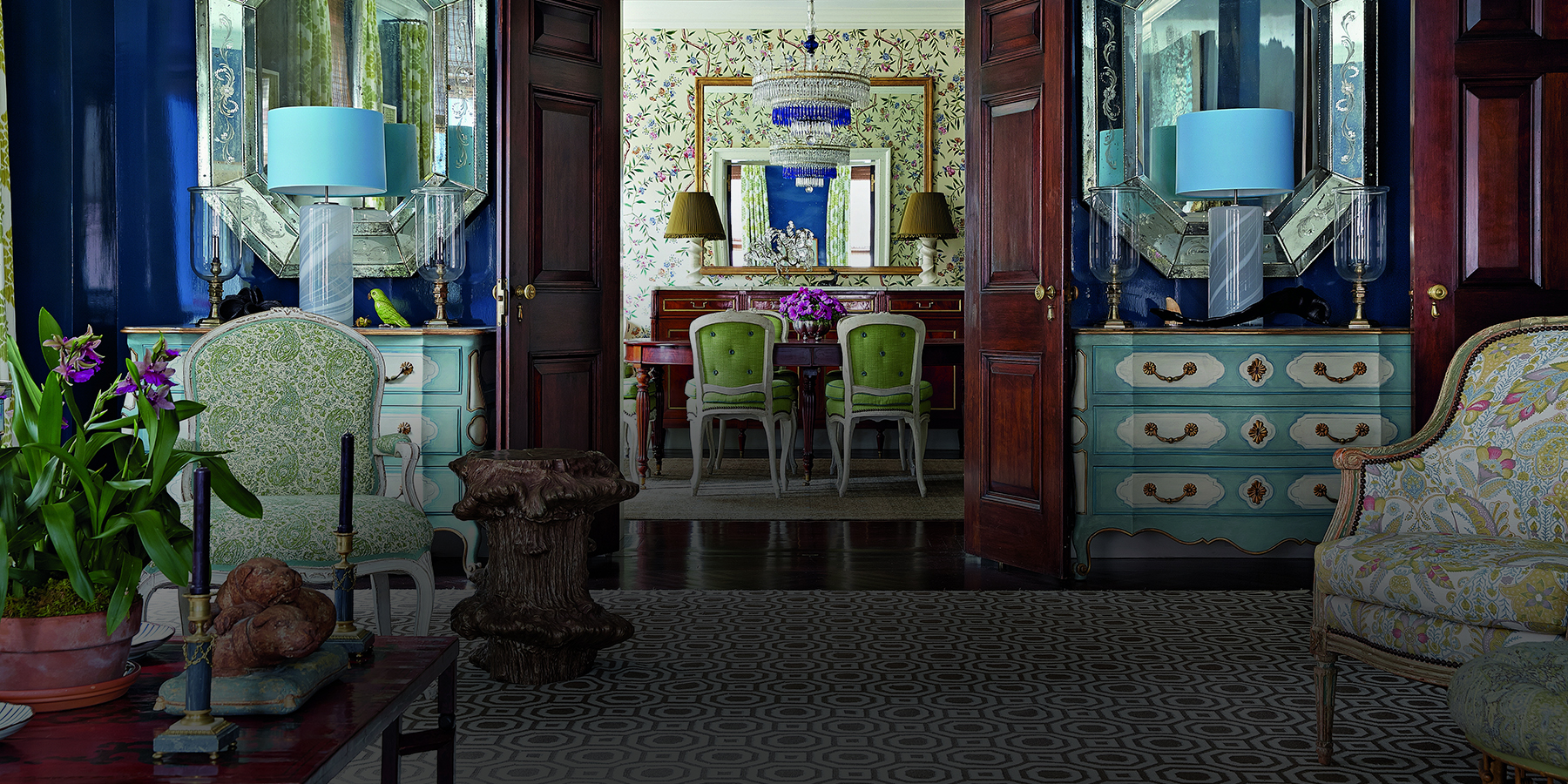 The low-key decorator of choice for a certain set of high-flying and highly discriminating clients, Markham Roberts creates spaces that are at once modern and traditional, soothing yet stimulating, cozy but cool. And now, many are on view in his recently released debut monograph. 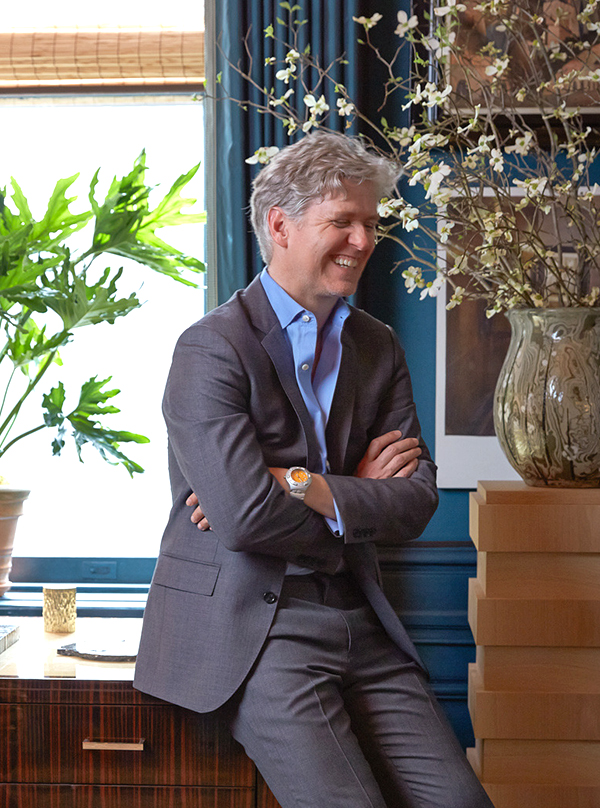 November 5, 2014“This approach is not easy,” say New York decorator Markham Roberts, “but when it’s done right, the result is beautifully rich, layered and sophisticated, yet unstuffy.” Top: Nearly every pillow, lamp shade and piece of furniture in this Sutton Place living room is covered in a different fabric. All photos courtesy of Vendome Press and by Nelson Hancock unless otherwise noted

New York decorator Markham Roberts is a witty and wise Midwestern type, an Indiana-born WASP with a low-key, confident and warm approach to making rooms pretty, but also extremely functional. He could be your grandmother’s favorite decorator, or your stylish best friend’s. Or both.

Roberts apprenticed under the late, great Mark Hampton, and he clearly learned a thing or two in his six years there. He’s been on his own for some 16 years now, working with a small, tight-knit crew and employed by an elite roster of clients who come to him for his signature brand of coziness.

Though he tailors his aesthetic to every project — “I try very hard not to have a style and imprint something on clients,” he says — there are things you will often see in a Roberts room: A tufted sofa or armchair, the color brown, fabric-covered walls and a surprisingly harmonious layering of patterns. All of these are vividly on display in his handsome and weighty new book from the Vendome Press, Markham Roberts: Decorating the Way I See It.

As the longtime decorating editor Senga Mortimer writes in the book’s introduction, Roberts has “unerring taste, an eidetic eye, a disciplined approach, and an inexhaustible imagination” — a covetable quartet of decorating virtues if ever there was one.

The opinionated title of the book — the way he sees it — gets at the quiet force behind Roberts’s politesse. “Everybody has a book,” says Roberts, seated in his brown-and-beige office on the Upper East Side, near to his home. “I wanted to wait until I had enough to show — and something to say.” 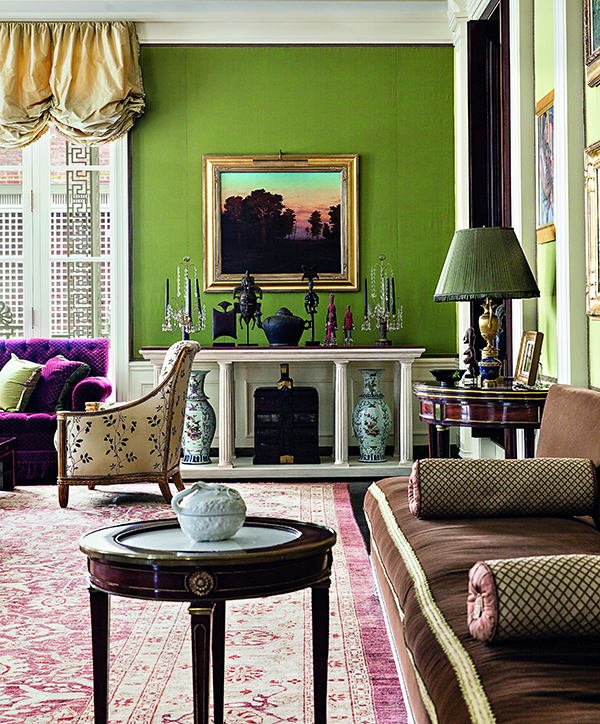 Thanks to multiple seating areas united by a large Oriental rug, the former ballroom of a Beaux-Arts mansion on Manhattan’s Upper East Side — with walls done up in green, a Roberts signature — can seat groups of varying sizes.

Unusually, the book doesn’t go project by project, but is instead arranged thematically. Roberts is eminently charming but also firm, and he begins the book by talking about the science of decorating — a scheme has to work, and not just visually. “Some people just go for looking good,” he says. “But a room has to function well. The first thing I do is make a floor plan.”

Chapter One spotlights three very large rooms in fine homes — a Beaux Arts house in Manhattan, a historic Locust Valley mansion and a summer home on Southampton’s Lake Agawam — that “have to be as comfortable for two people as for fifty,” says Roberts. Indeed, each of these rooms has discrete seating arrangements and space to move around, enabling easy and efficient relaxing.

They also feature unusual shades of green — another Roberts trademark — and softness to spare, from the silk-covered walls in the New York mansion’s living room down to the fabric-covered backgammon table in Southampton. “I love fabric on a wall,” says Roberts. “It’s cozy, and it kills sound. I sometimes double-cover a powder room: no one wants to hear a toilet flush in the middle of a party.”

Roberts likes the shiny pop of lacquered walls, too, especially in dining rooms. His chapter “Backgrounds” showcases the dining room of a gracious home in Nashville, where he works frequently, in which a dark-teal lacquer sets off a bright-white Ogden Codman–designed mantelpiece. (The room’s tufted dining chairs, meanwhile, whose backs are upholstered in a wild floral pattern, look comfortable enough to snooze in, should dinnertime conversation prove less than stimulating.)

“Everybody has a book,” says Roberts. “I wanted to wait until I had enough to show — and something to say.” 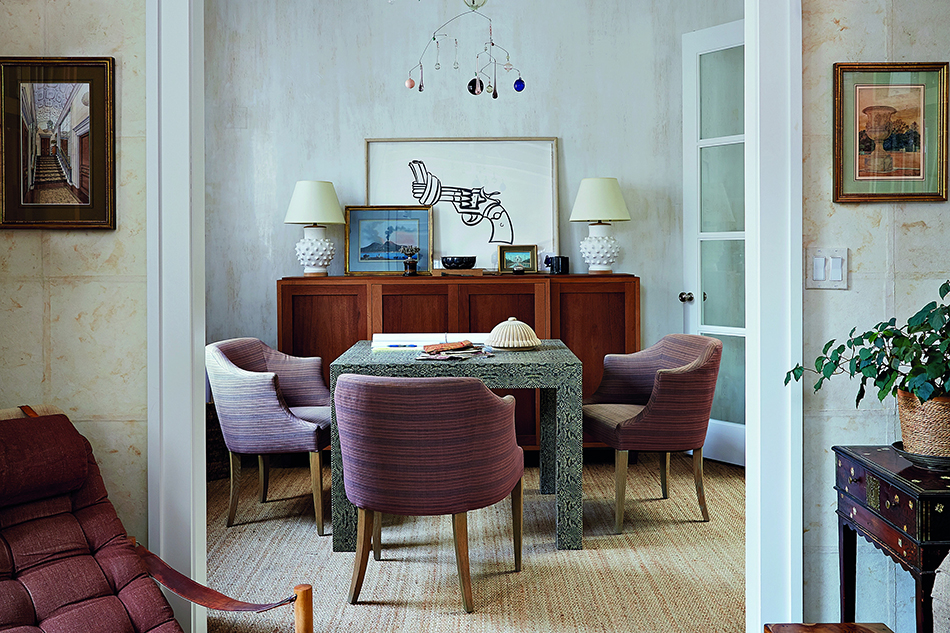 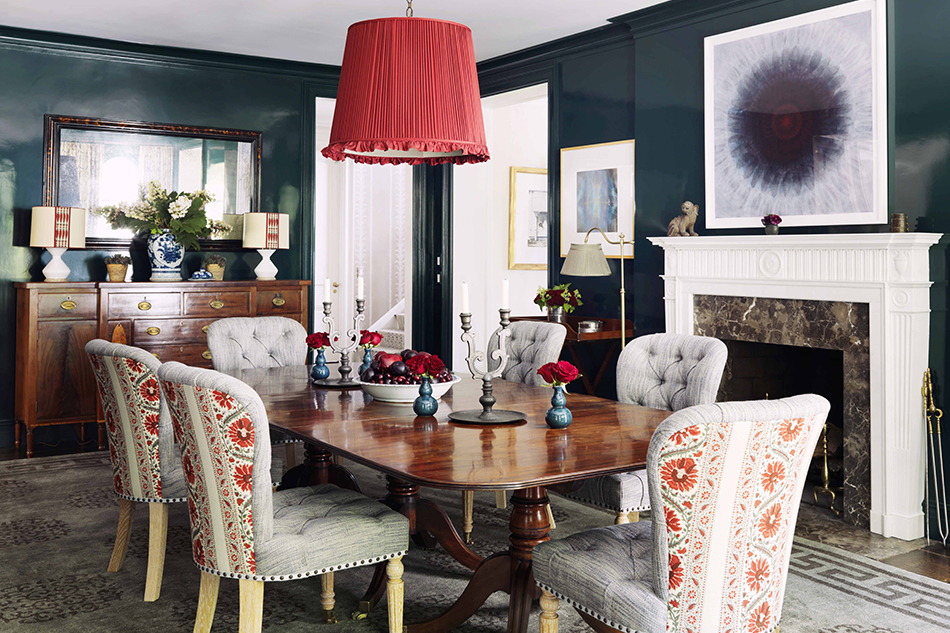 “Dining rooms are used mostly at night, so I am never afraid to use darker colors on the walls,” writes Roberts of this Nashville dining room, which features teal-lacquered walls. “Somewhat counterintuitively, the dark background makes everything in the room seem bright by contrast.” Photo by Thomas Loof 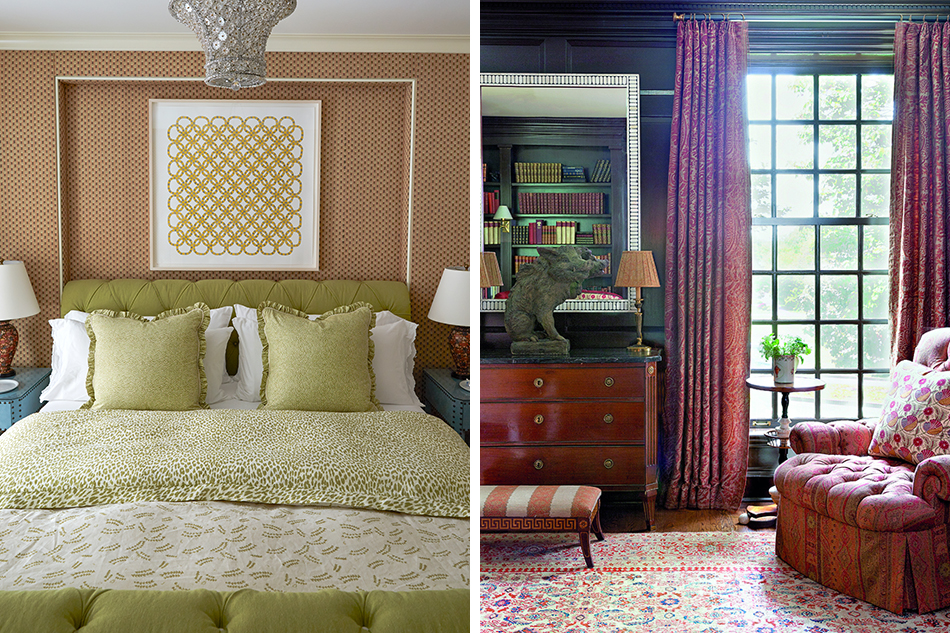 Left: “A canopy bed with pretty hangings makes a lovely sleeping experience,” writes Roberts, “but for the claustrophobic minded, an upholstered sleigh bed can feel equally enveloping.” Right: A deeply tufted, large-scale armchair anchors the library of a Nashville house. 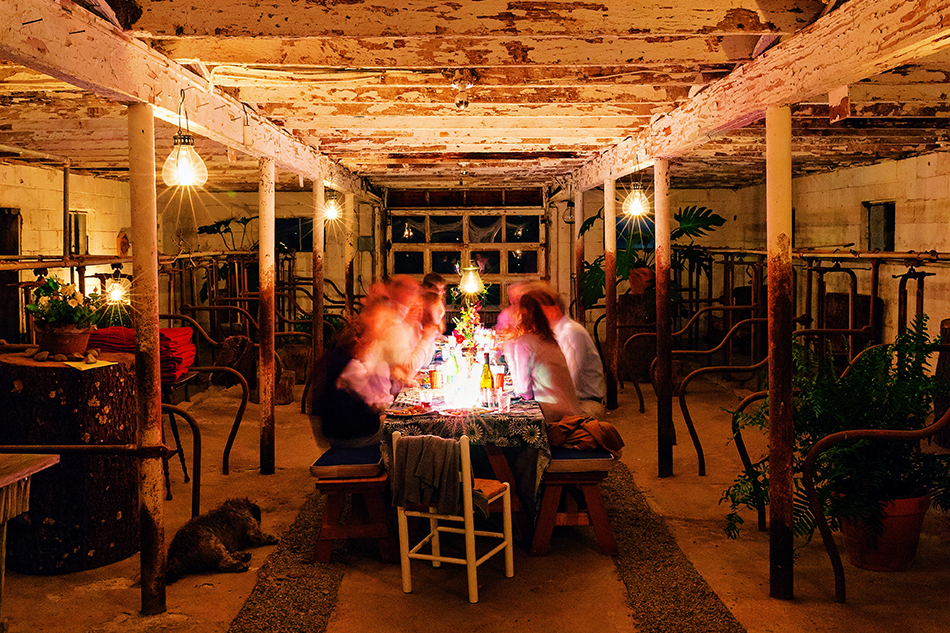 At the 19th-century home in Upstate New York’s Clinton Corners that Roberts shares with his partner, antiques dealer James Sansum, the original dairy barn – complete with milking stalls – makes an atmospheric spot for the couple to host dinner parties. 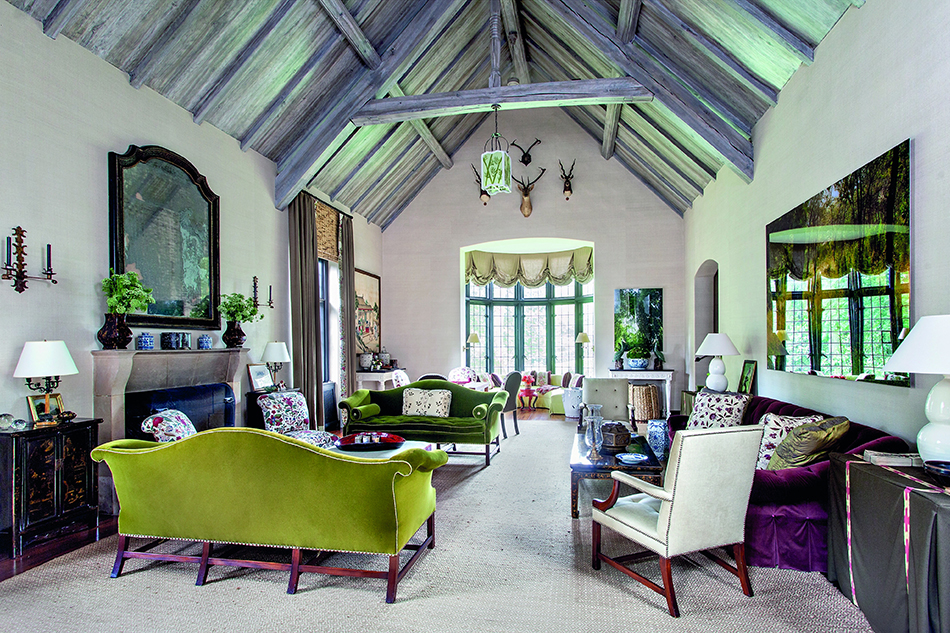 To keep large rooms, such as this one in Locust Valley, on New York’s Long Island, from feeling too formal, Roberts deploys comfortable upholstered seating and fabrics that are “luxurious but not intimidating,” as he writes in his new book. 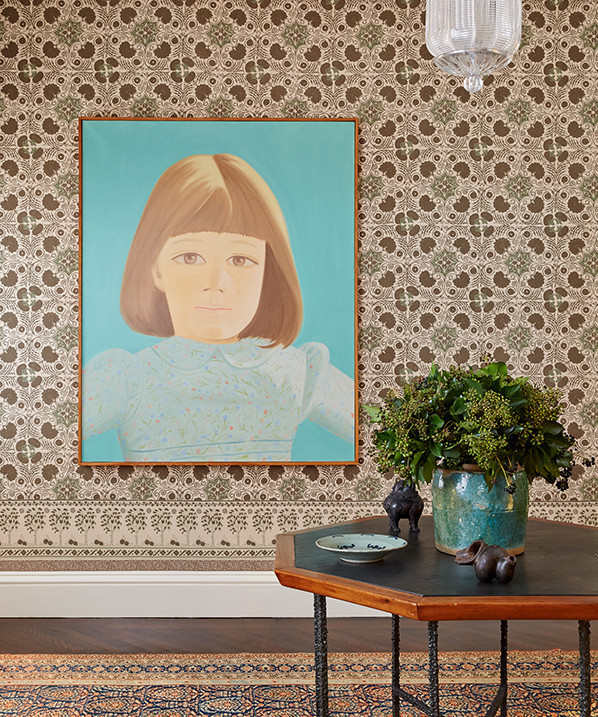 In New York, Roberts designed this Sutton Place entry around an Alex Katz painting of the client as a girl, placing an Indian rug under a Brutalist table and covering the walls in a vibrant pattern that harmonizes with the painting in an unexpected way.

Roberts has rarely met a kicky pattern he didn’t like — his book is encased in faux snakeskin — but he knows how to deploy them strategically. They never feel busy. “You can put pattern behind anything,” he says. “People are so afraid of it, and they don’t really need to be. Layered patterns can take on a unifying feel.”

As a case in point, he singles out an arresting shot in the book of an apartment in a Rosario Candela–designed building on New York’s Sutton Place. There, an Alex Katz portrait of his client as a little girl hangs on an intensely patterned wall, with an equally elaborate Oriental rug underneath. And she’s wearing a patterned blouse in the painting, too. Despite all this, the entry hall hums with harmony, and nothing seems to clash.

Roberts loves to let a piece of art or a collection of objects set the tone for a room — he’s eminently suggestible. In the curving, paneled stair hall of a house in Southampton, hanging one painting wouldn’t work, so he covered the walls with the client’s trove of antique tortoiseshells, complementing their pops of brown (“brown works with everything”) with African baskets and 19th-century Palissy ware.

Mixing is indeed Roberts’s religion. “There’s nothing new about mixing things together,” he admits, “but you have to do it right. I love the pull of different periods and styles. It relaxes the scene, and you can’t date it.” 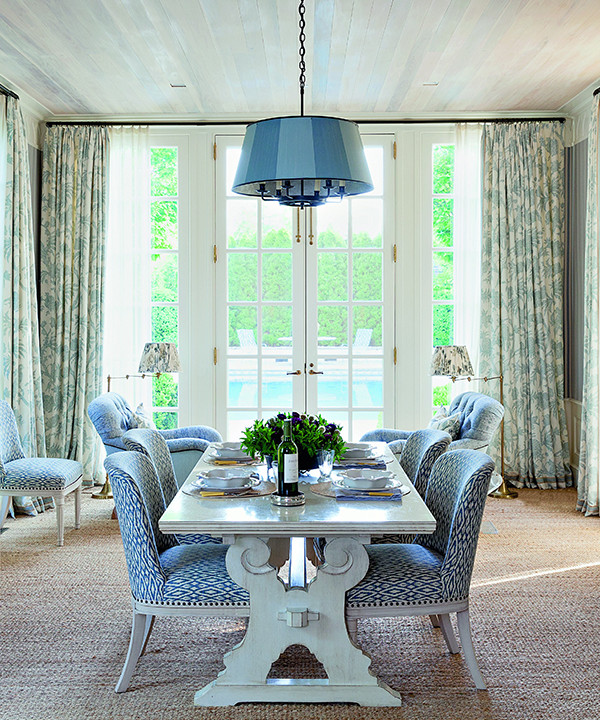 A Nashville breakfast room, with its floral toile curtains, sisal carpet, ikat-covered chairs and wood-paneled ceiling, is a study in subtly layered textures and patterns.

For friends in Nashville, Roberts wanted to incorporate a sturdy collection of antique English and American furniture that the clients had inherited. In the living room, alongside a pristine American highboy, Roberts interspersed 1940s Louis XVI–style armchairs, a 1970s python-and-lacquer coffee table and a Biedermeier commode — not to mention lamps he designed himself and named after his niece, Josephine.

The lamps are part of his ongoing effort to create bespoke objects. “I enjoy making custom furniture,” Roberts says. “I don’t like when a room looks like one thing from this showroom and another from that showroom.”

His interest in customization goes beyond just conventional furniture pieces. For a grand Upper East Side townhouse, he took inspiration from the forced perspective employed at Palazzo Spada in Rome. French doors open on to a narrow garden, and to make it seem larger, Roberts built a trompe l’oeil trellis backed by a mirror on the garden’s far side.

Roberts’s book ends on a personal note: The last chapter features the two homes he shares with his partner, furniture and art dealer James Sansum. (In addition to their houses, they also share an elevated, eclectic taste level; Sansum maintains a 1stdibs storefront featuring pieces that range from a William IV 19th-century writing table to an early-20th-century Japanese bronze vase.) Sansum inherited a Victorian sea captain’s cottage in Port Townsend, Washington, on the Puget Sound, and there Roberts has layered Victorian bric-a-brac with family heirlooms, all while keeping the emphasis on the water view. 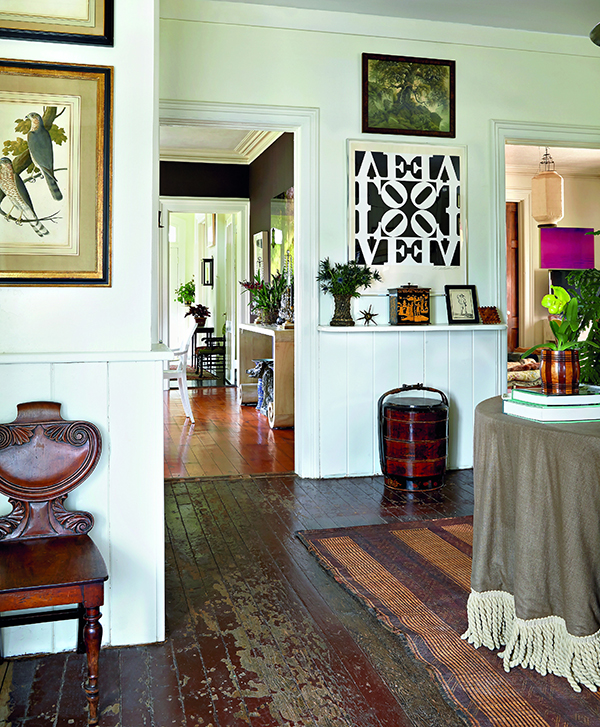 The art and furnishings of the Clinton Corners house represent the breadth of the couple’s collecting tastes, which range from Karl Springer furniture to Asian lacquerware, Indian temple miniatures to Neapolitan gouaches, contemporary art to 19th-century drawings.

Robert’s longest-term project is the home in Clinton Corners, New York, that he bought seven years ago and has been transforming ever since. Large and mansard-roofed, the Second Empire house, originally built in 1876, has proved fertile ground for Roberts, who doesn’t shy away from rough edges at home — as long as they are the right kind. In the entrance hall he ripped out the linoleum floor under which lay a painted-wood one, and hung on the wall a Robert Indiana “LOVE” print to remind him of his 1970s childhood.

The home also shows off Roberts’s talent for placing clusters of interesting objets, particularly ones with impressive provenance: 18th-century Russian crystal girandoles that once belonged to Jock Whitney in the dining room, say, or in the parlor, patrician decorating legend Sister Parrish’s enamel stand, now topped by a rubber goldfish, of all things.

Indeed, it’s Roberts’s respect for the past, and his ability to update it, that keeps clients coming back. After all, the book is dedicated to his grandmother Harriet Greathouse Cain, who endowed him with a love for domestic perfection.

He’s been approached by some TV decorating shows to ply his expertise on camera, but the old-school Roberts insists, “That’s the last thing I’d ever want to do. I like being relatively anonymous. I love decorating — I don’t want to do anything else.” 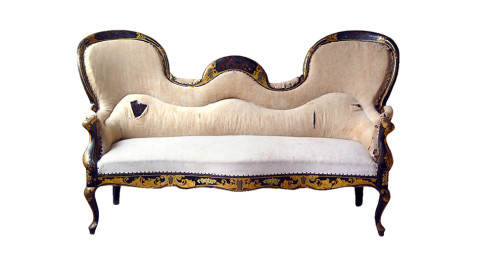 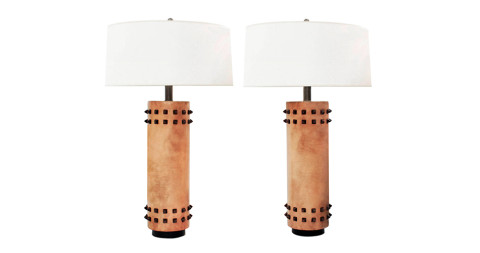 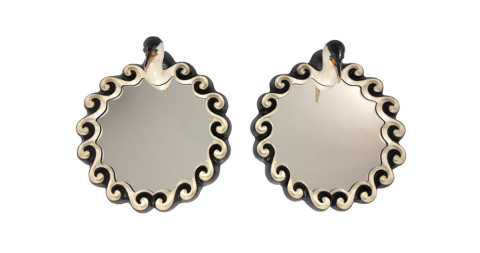 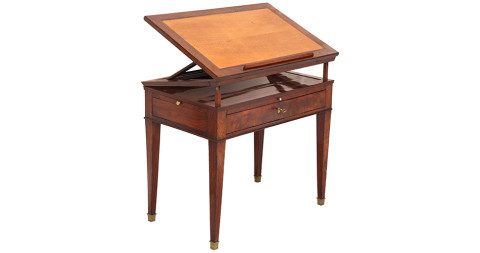 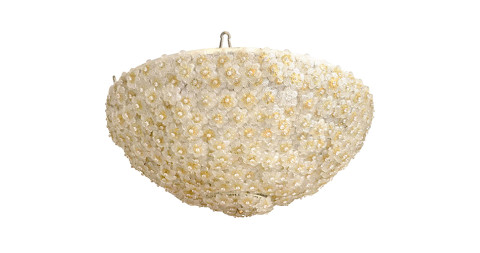