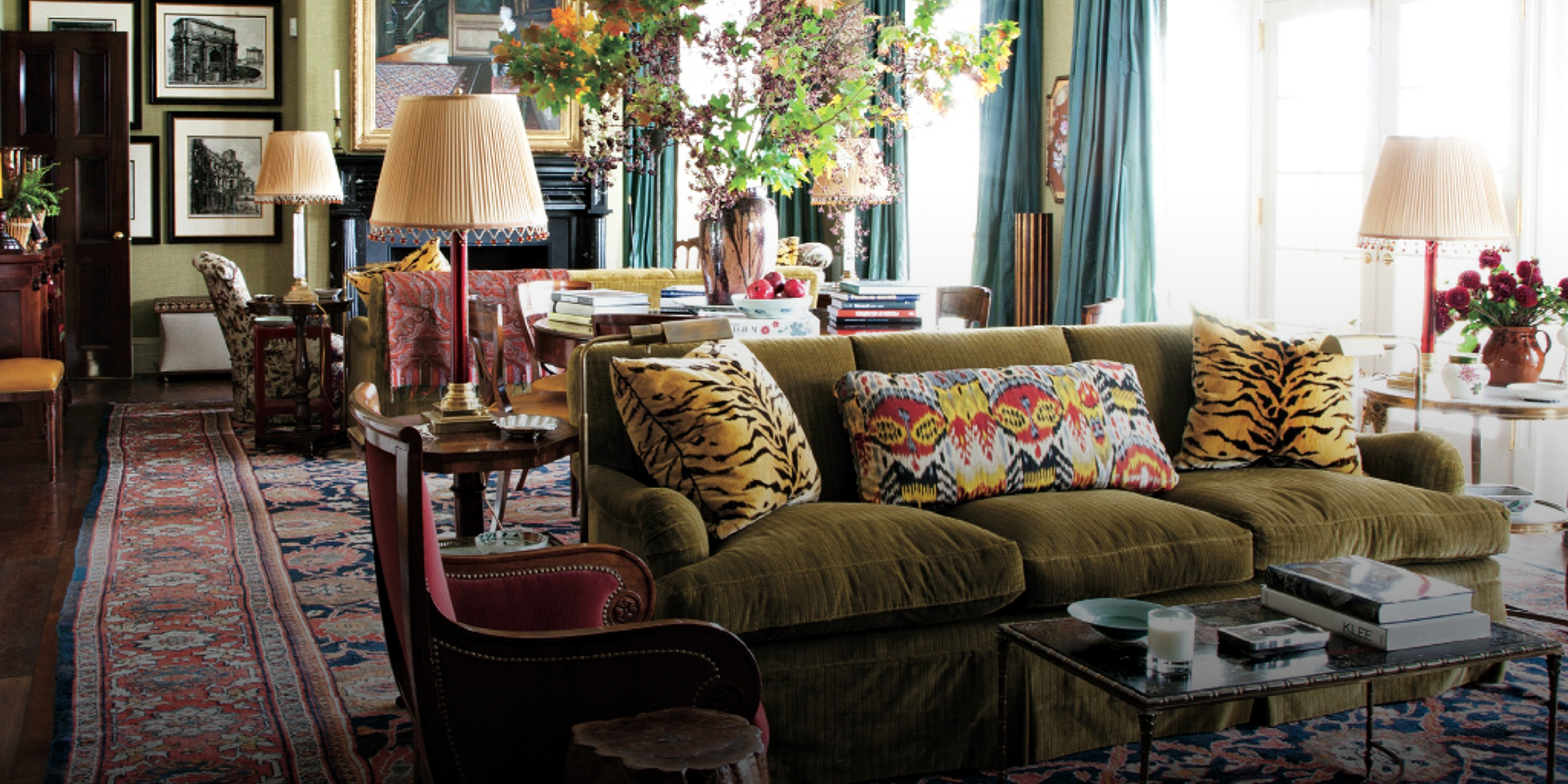 A refreshingly unconventional monograph from the New York designer perfectly captures the spirited, whimsical nature of his lush and lively interiors. 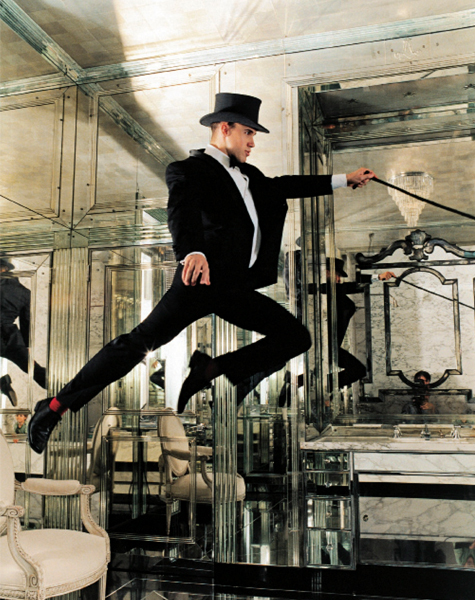 A photograph of interior designer Miles Redd in his New York townhouse, which appears in The Big Book of Chic, perfectly captures the spirited, whimsical nature of his interiors — and this new monograph. Top: A living room in Millbrook, New York, shows Redd’s talent for mixing bold colors, lustrous surfaces and playful patterns. Photos by Paul Costello

I’ll admit it: I was not prepared for what awaited me inside The Big Book of Chic. It’s not that the images or the production values were any more or less dazzling than what I’d come to expect from Miles Redd, an irreverent classicist, or from Assouline, publisher of artistic lifestyle and design titles. Rather, I had assumed that this first book from the New York decorator would unfold in traditional monograph format: chapters devoted to individual projects, presented chronologically or thematically, an accompanying narrative, perhaps some how-to bullet points or trade-secrets sidebars sprinkled throughout. You know the drill.

A traditional monograph this is not, however. The 300-page volume is more like a mood board in book form. There is very little text, for one, just a short and funny introduction by Redd and, as chapter openers of sorts, evocative quotes set in crimson type: Diana Vreeland on fabulousness, Alexander Pope on taste, David Bowie on partying and time management. There are no captions, either — or folios, for that matter.

Since the biographical information is kept to the barest minimum, allow me to fill in the blanks. A glamour-starved Atlanta schoolboy heads to New York University to study film, gains an encyclopedic knowledge of antiques while working for dealer John Rosselli, apprentices with grande dame Bunny Williams, opens his own firm in 1998, becomes creative director of Oscar de la Renta Home a few years later and now resides at the apex of the decorating world, with clients who include society fixtures and art collectors alike. 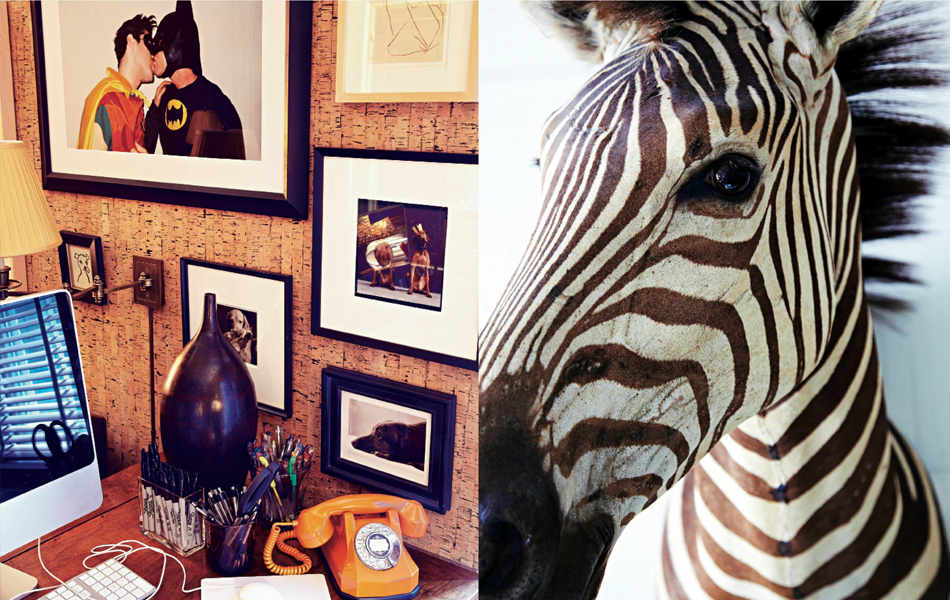 Two Redd signatures — cork walls and zebra stripes — are on display in an Upper West Side apartment. Photos by Paul Costello 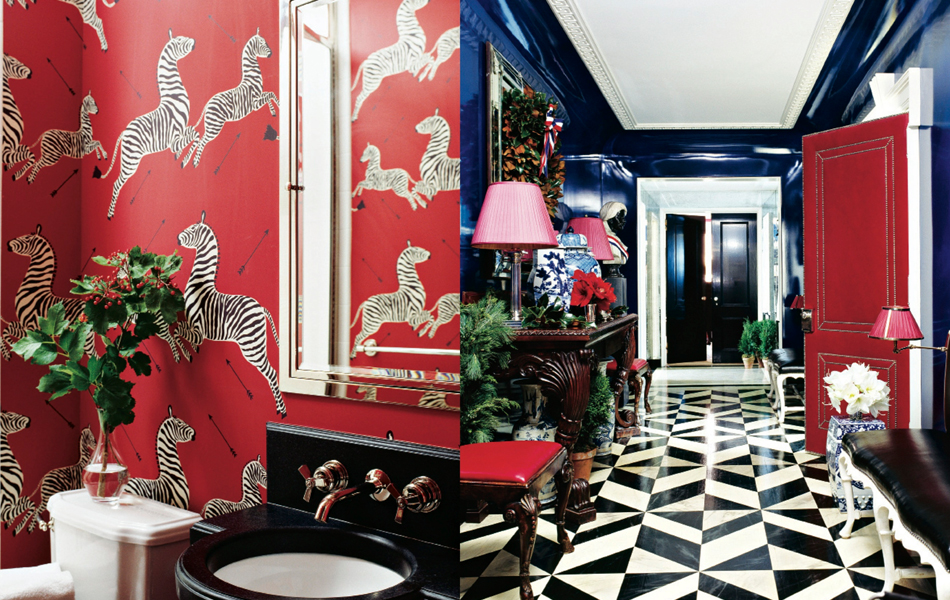 Two views of a retro-glam apartment on Fifth Avenue. Photos by Miguel Flores-Vianna 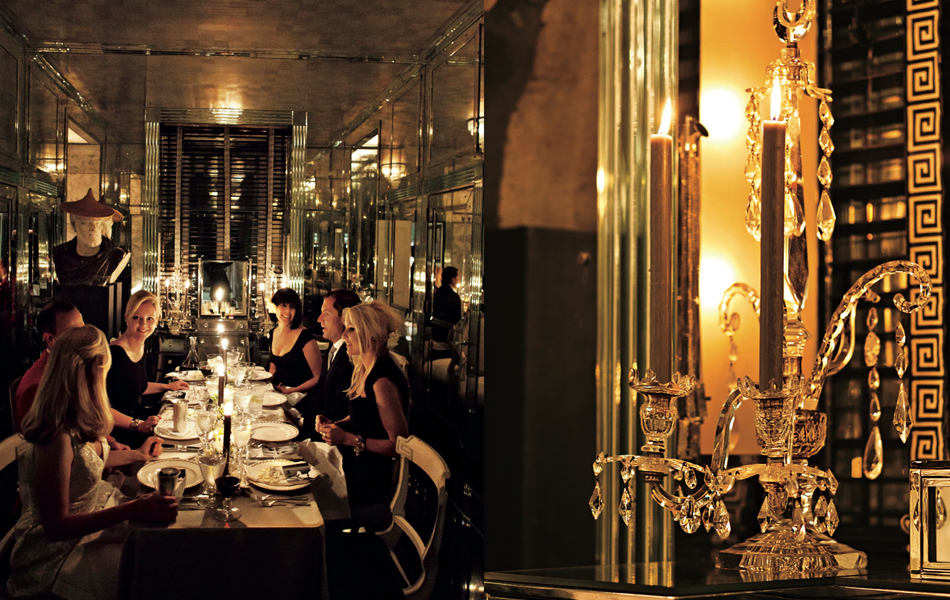 Redd installed mirrored paneling, designed in the 1930s by architect David Adler, in his townhouse, where he’s hosted many an intimate dinner. Photos by Quentin Bacon 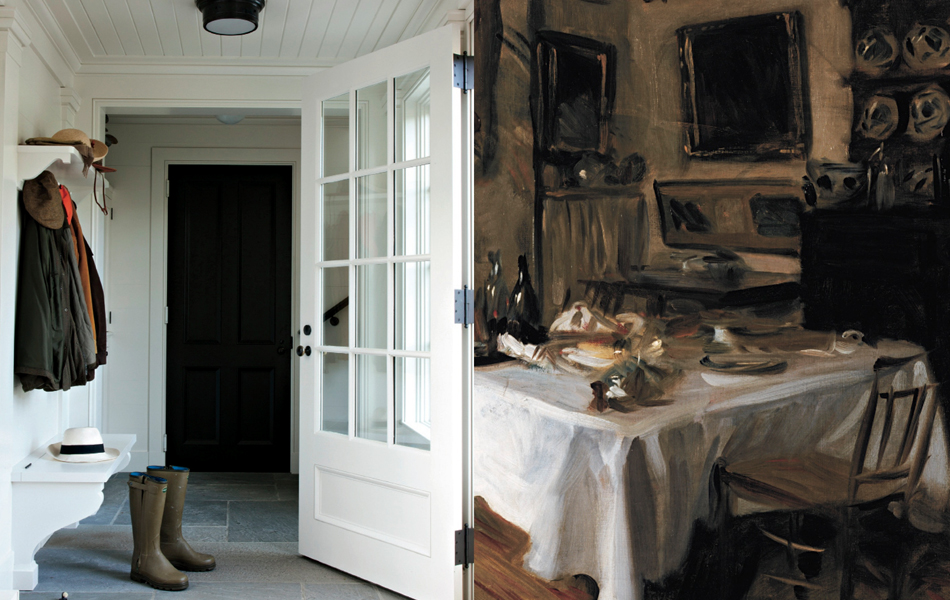 Many of the book’s spreads feature images of Redd’s work, including the house at left in Millbrook, New York, juxtaposed with sources of inspiration, such as the John Singer Sargent painting My Dining Room, ca. 1883–86. Photo by Paul Costello 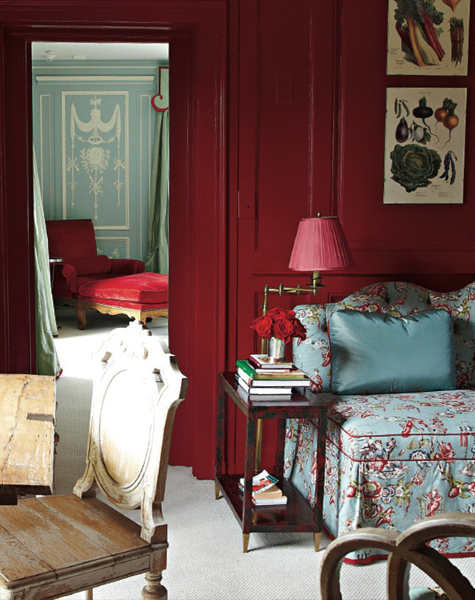 A house in Locust Valley, New York, where Redd’s fondness for adding his own high-octane twist to classic decor is on full display. Photo by Paul Costello

Inside the book, there’s simply spread after spread of sumptuous full-bleed, full-page photographs, wittily juxtaposed and tantalizingly unexplained. Rooms that Redd designed are interspersed with source imagery that inspired them. Some you might recognize (photographs by Cecil Beaton and Quentin Bacon; paintings by John Singer Sargent and Cy Twombly), while others can only be decoded by scrutinizing the small print in the back-page photo credits.

As such, The Big Book of Chic is both epigrammatic and enigmatic. At first, I found it to be a bit of a tease. Wait, what’s this space? How did he think to pair those prints? What are those lobsters doing on that wall? What’s the origin of his aesthetic, a slightly winking, high-octane reinterpretation of Albert Hadley’s well-mannered glamour? But then I surrendered to the conceit: By eliding the specifics, he conjures up a mood, a feeling — one that speaks volumes about his work and design sensibility.

In an age of name-dropping and hyperlink-y over-referencing, it’s pretty ballsy to leave out so much information. The lack of text creates a welcomed immediacy, sucking you straight into Redd’s glamorous, Gilded Age–esque, high-Hollywood worldview. As the author says in his introduction, he wants readers to have “the sensation of dancing across an MGM soundstage, silhouetted in a klieg light, because that was my intention with this book, a very personal blend of work and fantasy.” 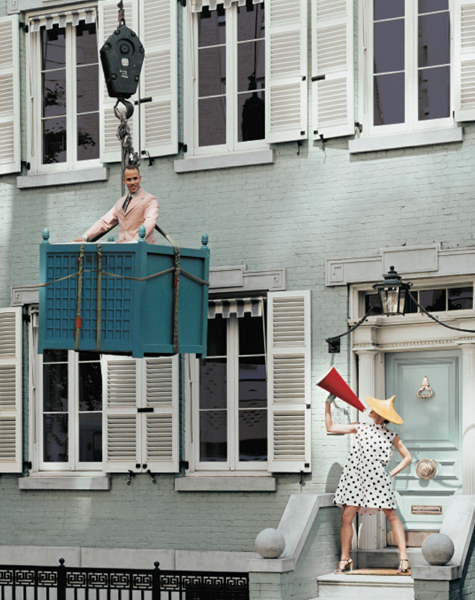 Never one for hewing too closely to convention, Redd hangs out in front of his townhouse. Photo by Doug Friedman

If you’re hankering for a portfolio-style monograph, however, or you want the nitty-gritty of how each project came together, then scour the Internet for Redd’s voluminous press clips instead, because The Big Book of Chic may leave you wanting. Ditto if you’re the type to flip through a new acquisition once and then stash it away for future consumption. This tome is best digested over a few successive reads; you’ll notice different details each time, getting a fuller picture of Redd’s work and motivation. In literature, as in decor, he favors the slow reveal, with layers that quietly unfold over time. Devotees of Redd’s oeuvre will recognize certain spaces (his own much-documented home), recurring motifs (flouncy curtains, mirrored paneling, painted-wood floors), and favorite touchstones (René Gruau illustrations, early 20th-century WASP culture). Neophytes, in contrast, may not catch all the references, but they’ll likely appreciate the book in a different way — more purely, perhaps — unencumbered by too much background. Overall, the monograph’s effect is mysterious and dreamy, but it’s also a bit of a guessing game. That said, props to Redd for empowering readers to come to their own conclusion about his work, to figure out for themselves what the story is.

In retrospect, it probably shouldn’t have surprised me that, with his publishing debut, Redd would choose to eschew convention and put his unique and subversive spin on a classic genre: He has founded his illustrious career on just that. 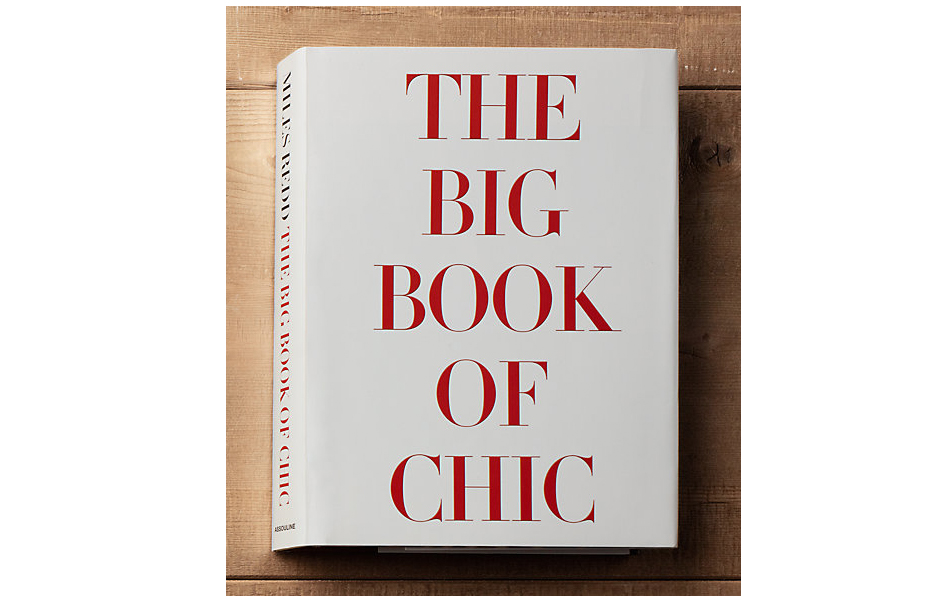