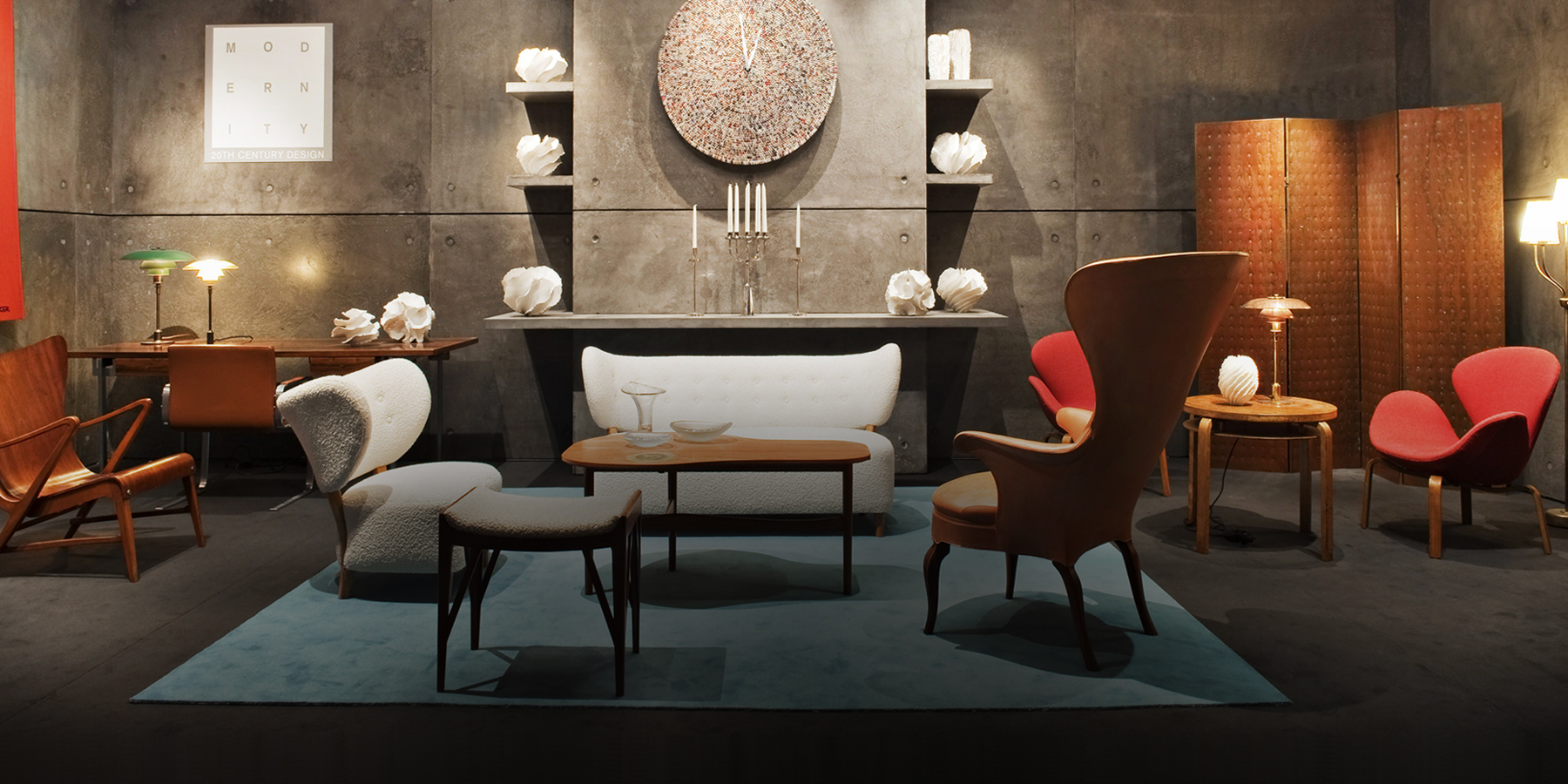 Step inside Modernity, one of Sweden’s — if not the world’s — leading dealers in mid-20th-century Scandinavian design, and an exhibitor at this month’s prestigious PAD London fair. 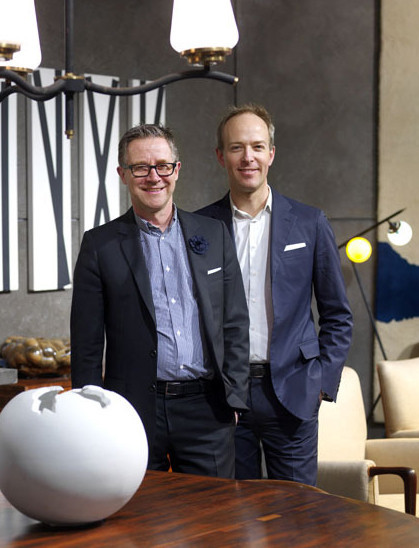 Andrew Duncanson’s childhood home in Glasgow, Scotland, wasn’t exactly a haven of good taste. “My mother collected brass figurines that hung by the fireplace,” says the dealer, who now lives and works in Stockholm. “There were brass frogs and things that she polished constantly.”

One day when he was 10, he visited a friend. The front door opened onto a light-filled oasis of calm and clean lines. “Everything was, to my mind, peaceful and beautiful,” Duncanson recalls. “My friend said her parents bought from just one shop, a place called Hans Christian’s. It was the only dealer of Danish furniture in Scotland.”

That visit had a lasting impact. Today, Duncanson co-owns Modernity, one of the world’s premier 20th-century Scandinavian design specialists — a gallery so respected that, in 2012, when New York’s MoMA wanted to acquire an Arne Jacobsen Egg chair for its collection, they called Duncanson.

Childhood playdates aside, Duncanson’s journey from Scotland to Stockholm really began in an Edinburgh pub. At the time, he was running his own interior design company, Tangram, but one night at the Laughing Duck, he met Isaac Pineus, a Swede studying politics at Edinburgh University. The two became involved, and when Pineus returned to Sweden, Duncanson went with him. He began studying Swedish — and Scandinavian design. “There is a great auction culture in Sweden, and reading old catalogs helped me learn about Scandinavian designers and what was available,” Duncanson says today. In 1998, the pair opened Modernity on a cobbled street in Gamla Stan, Stockholm’s Old Town. Their timing proved ideal.

When New York’s MoMA wanted to acquire an Arne Jacobsen Egg chair for its collection, they called Modernity. 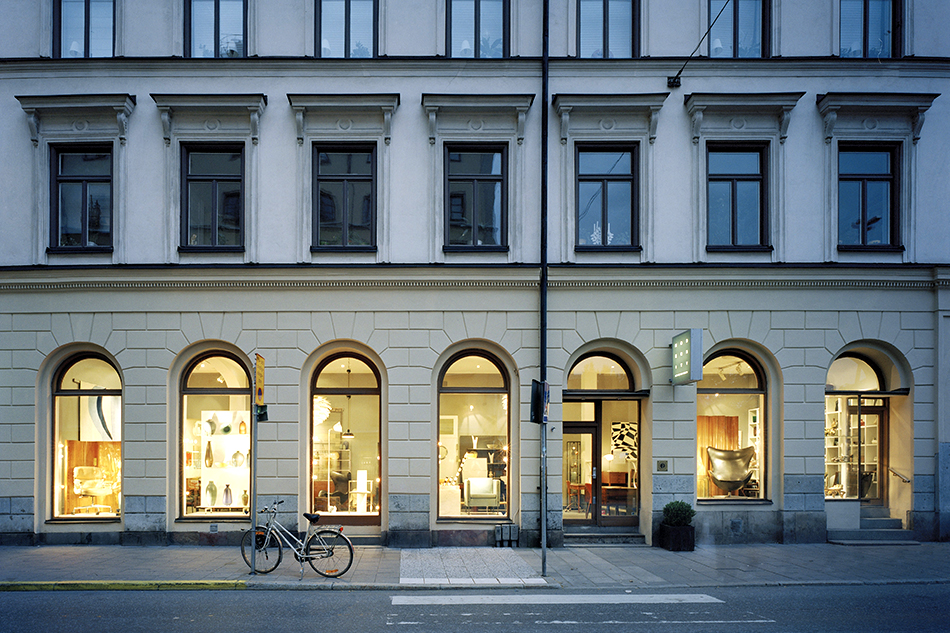 Modernity moved to its current, larger location overlooking a busy square in Stockholm’s Östermalm in 2003. 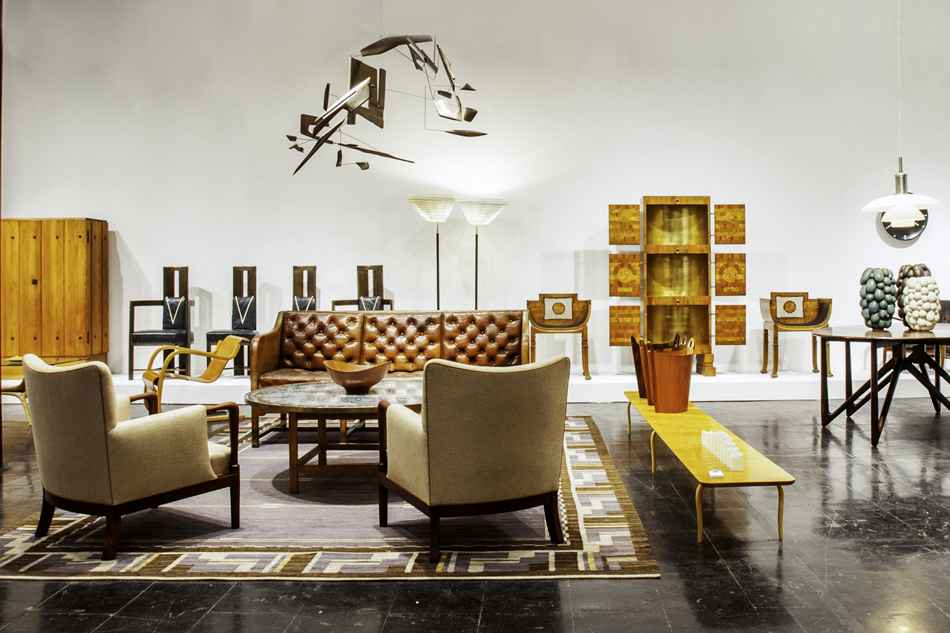 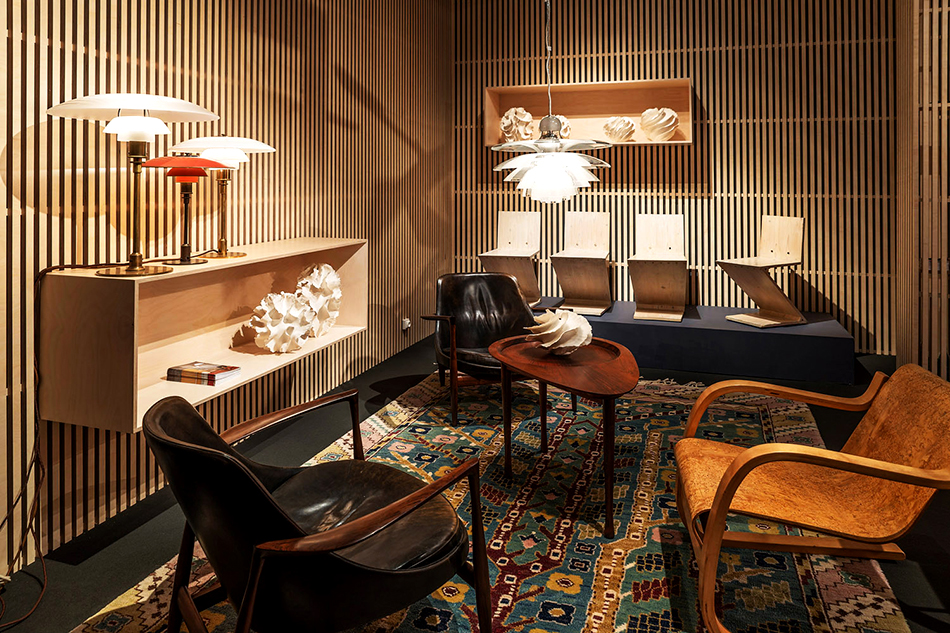 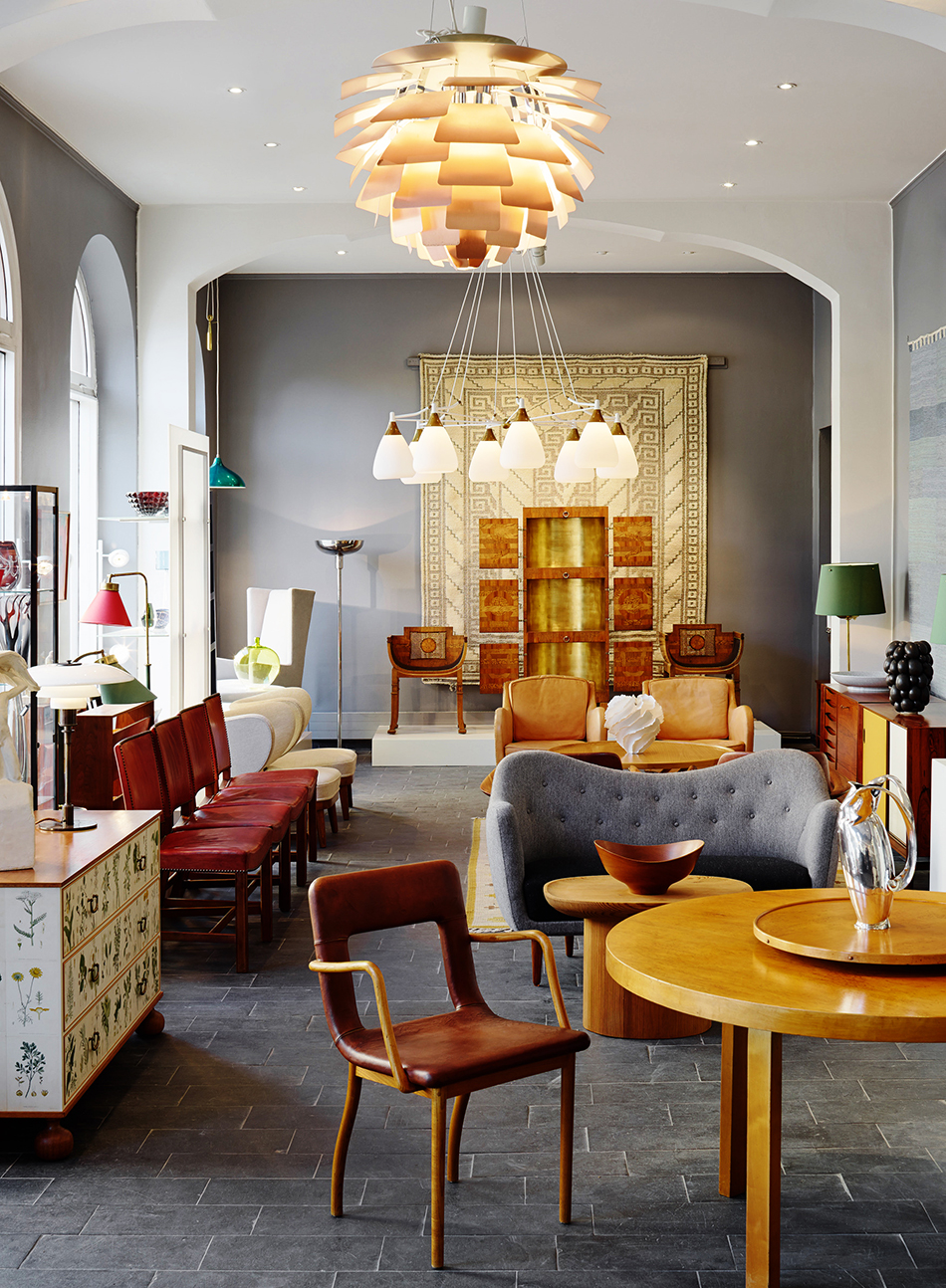 Among the pieces currently on display are a Finn Juhl sofa, 1940s; a Josef Frank for Svenskt Tenn chest of drawers, 1940s; and a Flemming Lassen armchair, 1937.

“When we opened there was a wave of publicity for Stockholm,” says Duncanson. “I think it started with Wallpaper* magazine. The interest in Scandinavian interiors and design suddenly grew.” For a while, their shop was one of many. “You could sell anything that looked like mid-century Scandinavian design,” he continues. “Dealers in the States were buying containers of stuff and shipping it over.” But, says Duncanson, while Modernity remained focused on quality, many of the other businesses went for quantity, and most eventually disappeared.

In 2003, Duncanson and Pineus relocated to larger, smarter premises in Östermalm, Stockholm’s equivalent of New York’s Upper East Side. Overlooking a bustling public square, the gray-walled, slate-floored store now displays scores of museum-quality pieces — including a one-of-a-kind 1916 silver vase, the Birth of Venus, by Swedish designer Sidney Gibson — plus artworks, lighting and glassware. After originally focusing mostly on Scandinavian furniture from the 1920s through the 1960s, the store has recently broadened its scope to add vintage silver jewelry, including sublime pieces by Torun Bülow-Hübe and other Nordic designers, as well as modern ceramics by artists based in Scandinavia.

Historic ceramics have long been one of Duncanson’s primary interests, and he now enjoys representing contemporary ceramicists as well. “We started with Sandra Davolio, an Italian designer living in Copenhagen, and now we sell most of what she makes,” says Pineus, indicating a white porcelain vase decorated with layers of undulating frills and resembling a piece of marine flora.

For many years, Pineus maintained a parallel career as a journalist with one of Sweden’s leading newspapers. Today, however, he manages the gallery day to day and develops plans and strategies to expand the business. Duncanson, meanwhile — whom Pineus describes as “an encyclopedia of design history, prices and provenance” — works with customers and does all the buying and selling. In addition to a brick-and-mortar and online presence, Modernity exhibits at the PAD fairs in Paris and London (which opens October 15 in Berkeley Square), the Salon and Collective fairs in New York and the Stockholm International Antiques Fair. In their free time, the couple and their twin four-year-old boys head to Sweden’s west coast to spend time in their modernist country house designed by famed Swedish architect Gert Wingårdh.

Though the store has moved and grown over the years, what hasn’t changed is Modernity’s emphasis on dealing only in the best of the best. “The whole point of having the shop is to reinvest any profit in buying better things,” says Duncanson, going on to explain that at international fairs there’s a lot of competition and that what you bring and how you present it matters tremendously. “You’re putting yourself out there at the forefront of vintage design, and you have to have the best pieces you can find,” he concludes. “So that is what we’re looking for: the top, top quality pieces.” 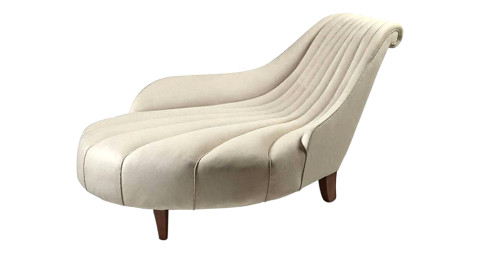 Åhrén was an architect who also designed furniture. His lady’s dressing room was very highly acclaimed at the Paris exhibition in 1925. But this daybed is unique. It was made for the Jubileum exhibition in Gothenburg in 1923, which was a major exhibition in Sweden. 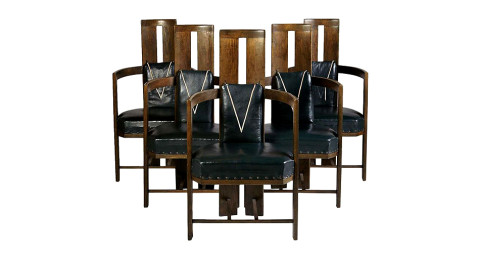 The Finnish architect – who was the father of Eero – moved to the States in 1923, and it’s very rare for a design to come up from his early Finnish period. We have a set of dining chairs that he made for a businessman’s apartment in Helsinki. They’re amazing to look at as they seem so modern, but they were actually designed in 1907. The only clue to the date is the marquetry work in ebony, pewter, birch and mahogany. 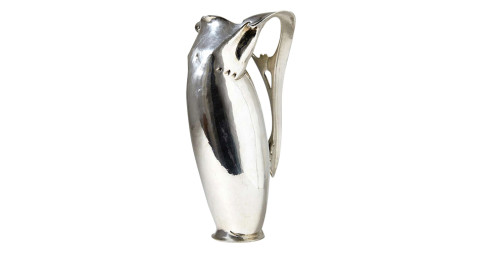 Despite his name, Sidney Gibson was Swedish. Not a lot is known about him, but he was a very accomplished designer, not least of all creating amazing furniture for Stockholm’s City Hall. We have a spectacular handmade silver jug called The Birth of Venus. It was made in 1909, and it’s the only piece of Gibson I’ve seen in 15 years. 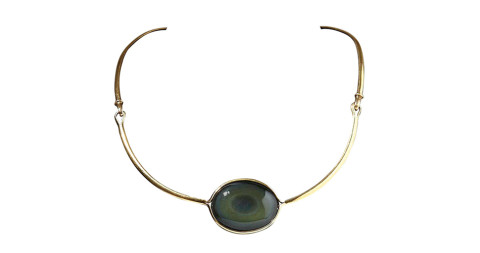 We met Torun when she was alive and began visiting stores at the end of the 1990s to buy back her pieces for exhibitions. She was one of the few Swedish silver and jewelry designers who became known outside of Sweden, collaborating with the likes of Picasso and Dalí. This necklace has a detachable front so it can be worn with either a simple mother-of-pearl band or with an amazing stone. It was made for Torun’s friend Signe Persson-Melin, a ceramicist who was allergic to silver, so this is made in gold. 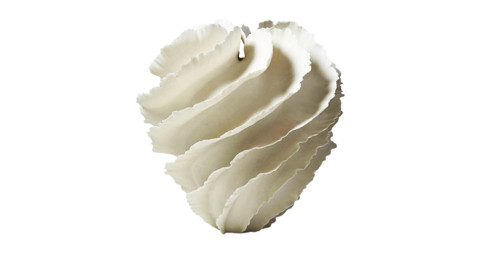 We also represent contemporary artists, especially ceramicists. One who’s been very successful with us is Sandra Davolio. She’s Italian but has lived in Copenhagen since 1970, so we think of her as Scandinavian. She makes the most amazing vessels in porcelain that almost look like coral. They’re mostly white, but some are glazed. Their edges are very thin, almost transparent. But it’s porcelain so it’s a lot stronger than it looks. 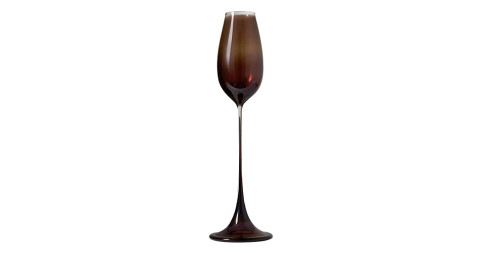 This is an icon of Scandinavian design and it’s in all of the design books. If you look carefully at a group of Tulip glasses, you’ll see they’ve got different colors. They also have very thin stems, up to 20 inches high. They were extremely difficult to make. I spoke to someone who worked at NK, the high-end Stockholm department store, in the late 1950s and early ’60s, and she said that for every three they sent, only one arrived intact. But we ship them all over the world, and if they’re packed correctly, they are safe.