Natasha Baradaran Has a Global Perspective and a Personal Touch 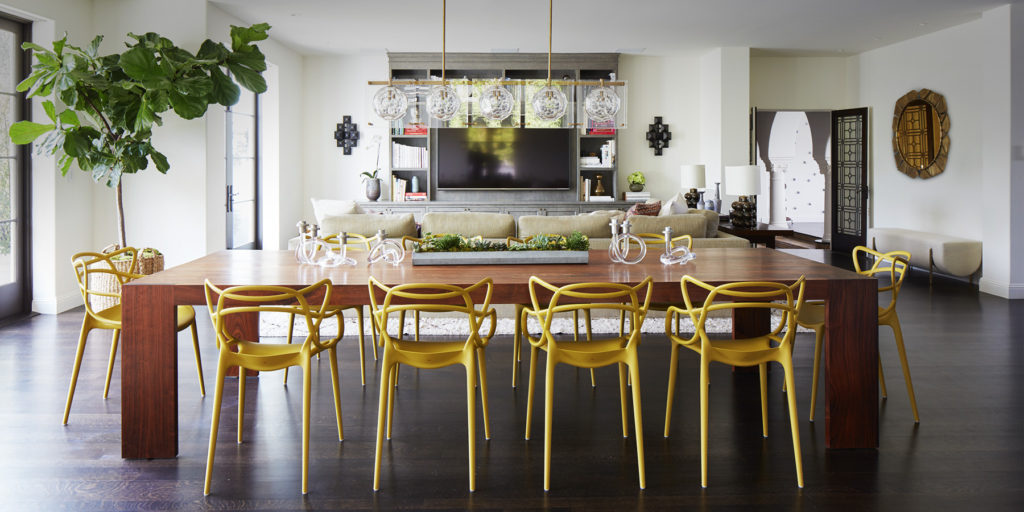 The Los Angeles designer, who is well-versed in a variety of styles, has a knack for creating interiors that speak to her clients’ interests and lives. 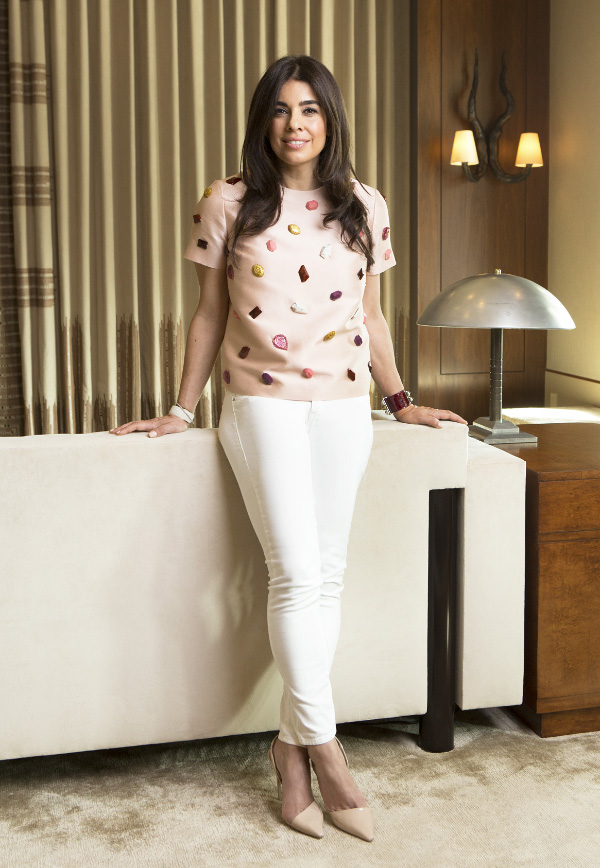 October 17, 2016Natasha Baradaran was set to start a Ph.D. program in international relations when she decided to take some design classes and apply for an internship (photo by Stephen Busken). Top: In a home in the Brentwood area of Baradaran’s native Los Angeles, a Marmol Radziner walnut breakfast table is surrounded by Masters chairs by Philippe Starck and Eugeni Quitllet for Kartell. A Rochillion chandelier by Jonathan Browning hangs over the table. All photos by Roger Davies, unless otherwise noted

Persian by way of Italy in heritage, Los Angeles designer Natasha Baradaran has a perspective on furniture, interiors and life unlike any other. “A lot of people feel that I speak with an accent,” she says, “even though I was born here and I’ve never even been to Iran.” Baradaran’s mother was raised in Milan, and the designer picked up Italian on summer visits to see her grandfather. Add in some Spanish classes in school, and Baradaran grew up speaking four languages.

You can see the fruits of this diverse background throughout her practice: in her furniture collection, with its jewelry-inspired pieces, like the Cuff console and the Baguette coffee table, and in the way she crafts her clients’ rooms. They are also in evidence in Baradaran’s California ranch house, which is filled with Persian rugs from her grandfather, as well as vintage pieces from her favorite stores in Milan, such as Robertaebasta. “Our home really reflects the way we travel and who we are, and it’s very comfortable because I have two daughters,” she says. “My rooms are different colors, and I’m always experimenting, as almost all designers are, taking something out and adding something new.”

Baradaran took a unique path to success. After the Los Angeles native graduated from the University of Southern California, she was on track to become a professor of political science, with a master’s degree in international relations from Columbia University. Then came two epiphanies, the first marked by disenchantment and the second by inspiration. “I was spending all this time in a dungeon-like library in the fabulous city of New York, and I felt like, I don’t even deal with people here,” she says. “I need to go out and see things and be with people.” 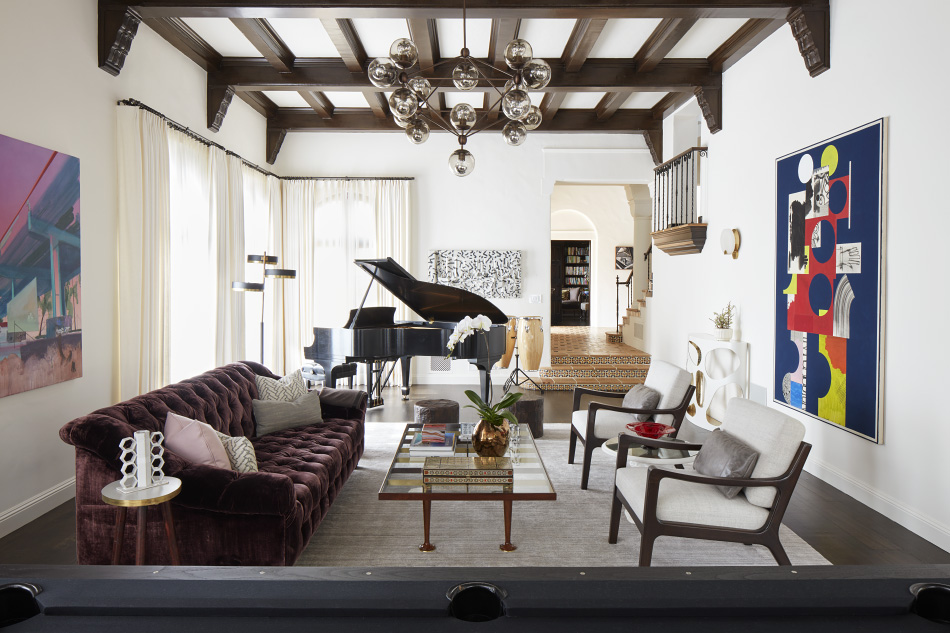 In this Spanish contemporary home, a Modo chandelier from Roll & Hill hangs in the living room, which also contains No. 27 chairs from Holly Hunt, a Cuadras coffee table from Downtown and vintage leather stools from Hollywood at Home. 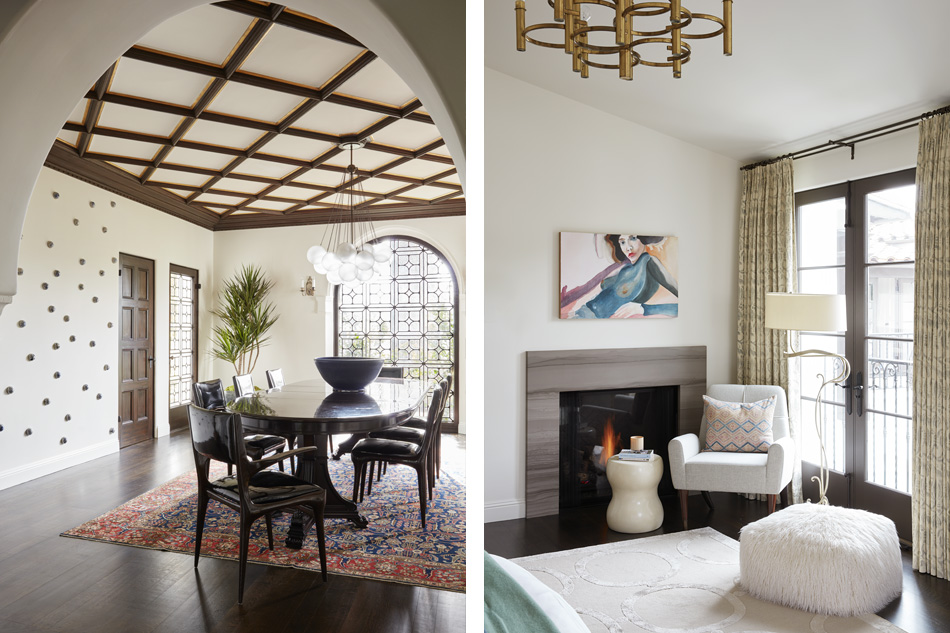 Left: A Cloud chandelier by Apparatus hangs over the homeowners’ table in the dining room, which is surrounded by vintage leather chairs from Robertaebasta. Right: A reading nook in a corner of the master bedroom features a Dolce Far Niente chair by Baradaran, a side table from Robert Kuo and a floor lamp from Downtown. 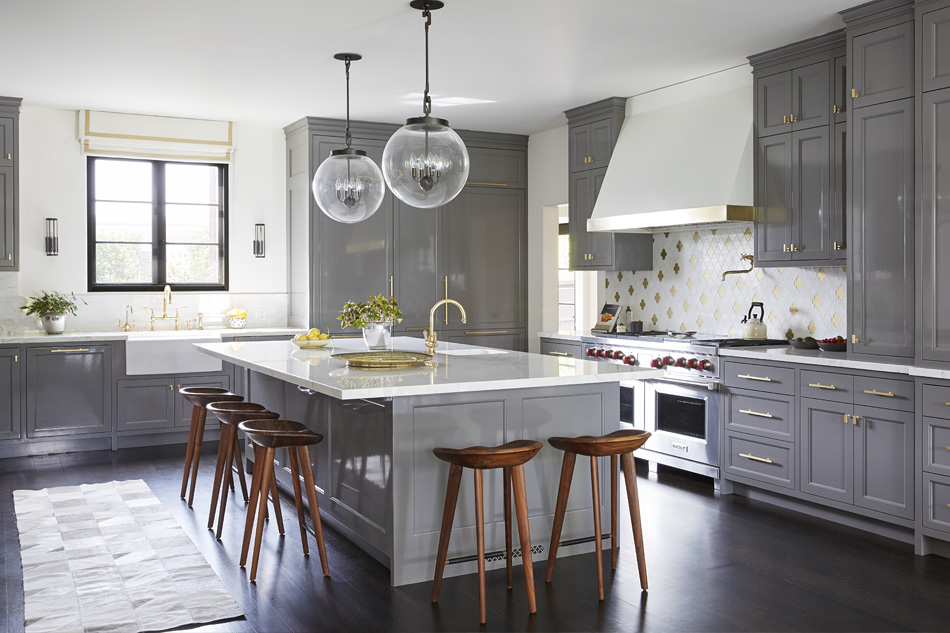 Gray-lacquered cabinetry provides floor-to-ceiling storage in the kitchen, where “tractor” walnut counter stools surround the large island. The Globus pendants over the island and Altamont wall sconces flanking the windows are from Urban Electric. 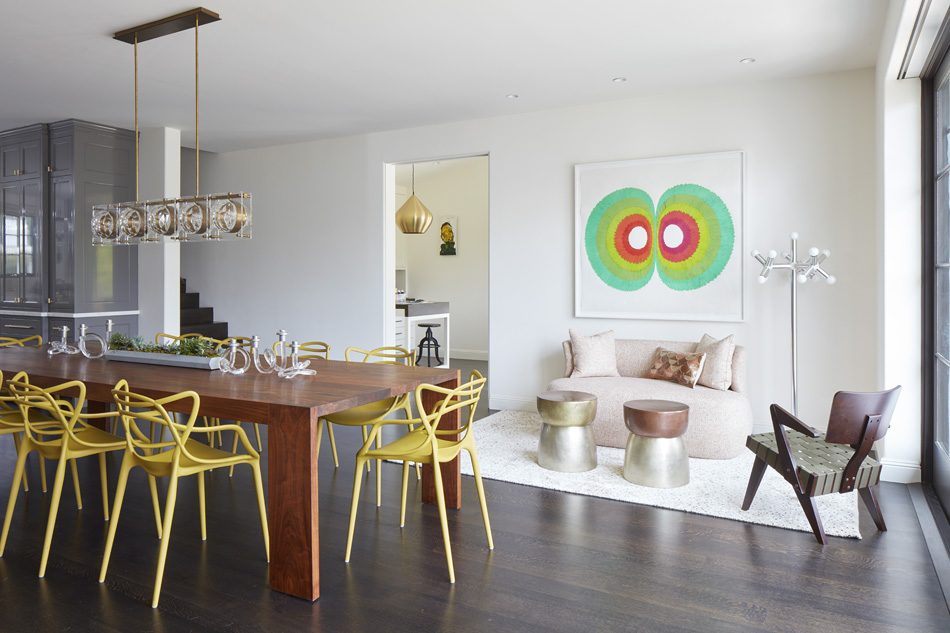 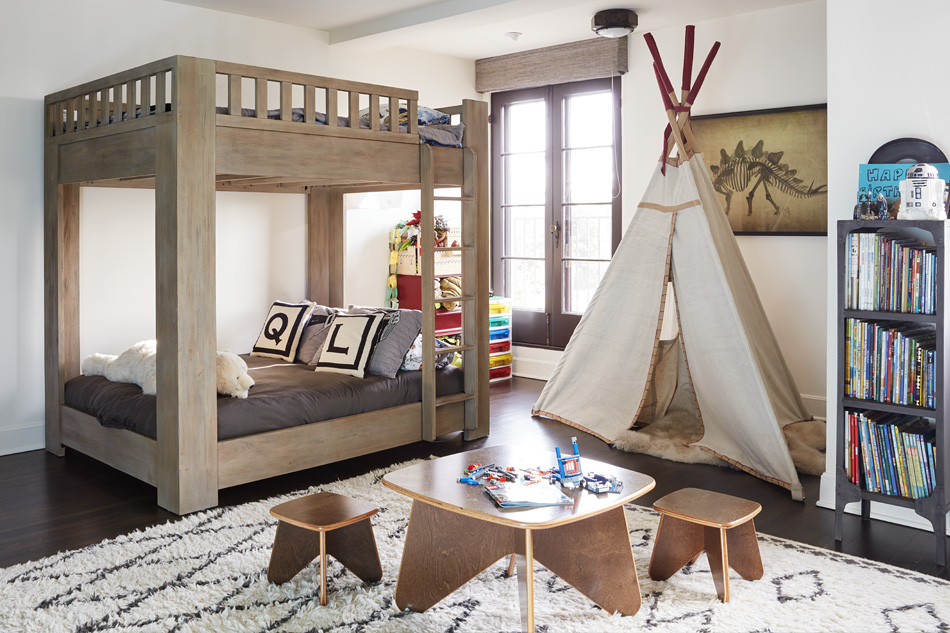 This boy’s room features a bunk bed by RH Baby & Child, plus a teepee and play table atop a Moroccan rug. 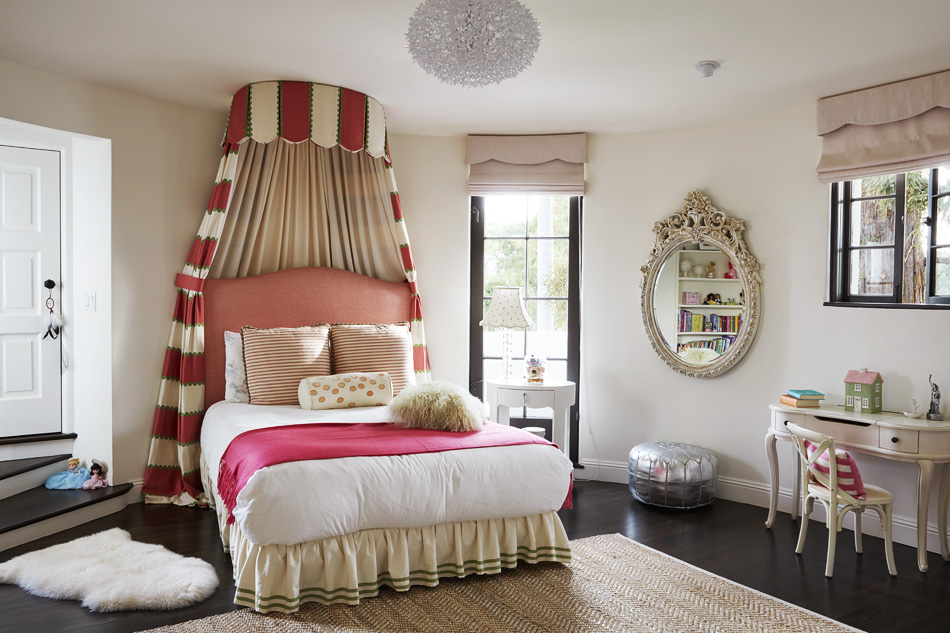 A custom bed with a demilune canopy is the focal point of the girl’s room, which also includes a Kartell pendant light and a silvery pouf. 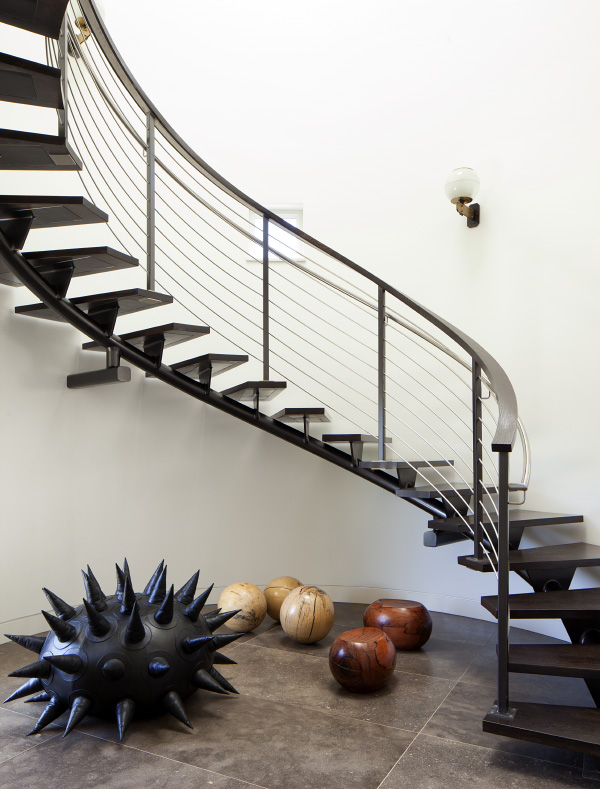 At the base of a winding staircase in a Hollywood Hills home, a large Urchin beanbag from Blackman Cruz is grouped with vintage wooden balls from J.F. Chen.

Baradaran got back into painting, which had been a passion growing up, but stayed on the poli-sci track, returning to L.A. in anticipation of starting a Ph.D. program in international relations at the University of California, Los Angeles. Newly married and living in a small home in Beverly Glen Canyon, she took some design classes and applied for an internship on a whim. That’s when inspiration hit.

Upon walking into Wilson and Associates, a large design firm in downtown Los Angeles, her neurons fired with possibilities. “It was the first time I really saw design on that scale,” she says, snapping her fingers to signify the second epiphany, “and I was hooked immediately.”

She hustled her way through the ranks at Wilson and Associates, working on big-budget projects in Las Vegas and Tokyo, attuning her eye to many different styles. She was often out of town, coming home to Los Angeles only on the weekends. It was a lifestyle she found fascinating but not conducive to her next big goal: starting a family.

Baradaran decided it was time to rearrange her life’s design again. She left the big firm and started her own practice in L.A. Going solo was scary at first, but her time at Wilson and Associates had given her a deep background in many styles — from Asian contemporary to Tuscan infused with Portuguese and Moroccan elements — and the housing boom of the early 2000s helped her make her way. She soon became one of the city’s most sought-after designers.

“I love the idea of neutrality and trying to give a feeling of richness based on texture and layering, the beauty of pieces and lines and architecture,” Baradaran says.

One big client was a science-fiction film director with dreams of living in the ultimate bachelor pad in the Hollywood Hills, complete with a movie screen in his living room and a stylish garage for his car collection. “It was really about clean lines, a neutral palette, texture, the combination of pieces you may not think would necessarily get placed together,” Baradaran says about her concept for realizing the client’s vision.

For the movie screen, she had a custom curtain fashioned — suede with leather embroidery, very Art Deco — and placed on either side octopus sconces from Blackman Cruz. The client loved World War II movies, so she decked the walls of the garage with airplane wings. Baradaran created masculine lines throughout the house, using an ebony lacquer and rose gold Spila table from her own collection as a shiny focal point in the master bedroom. 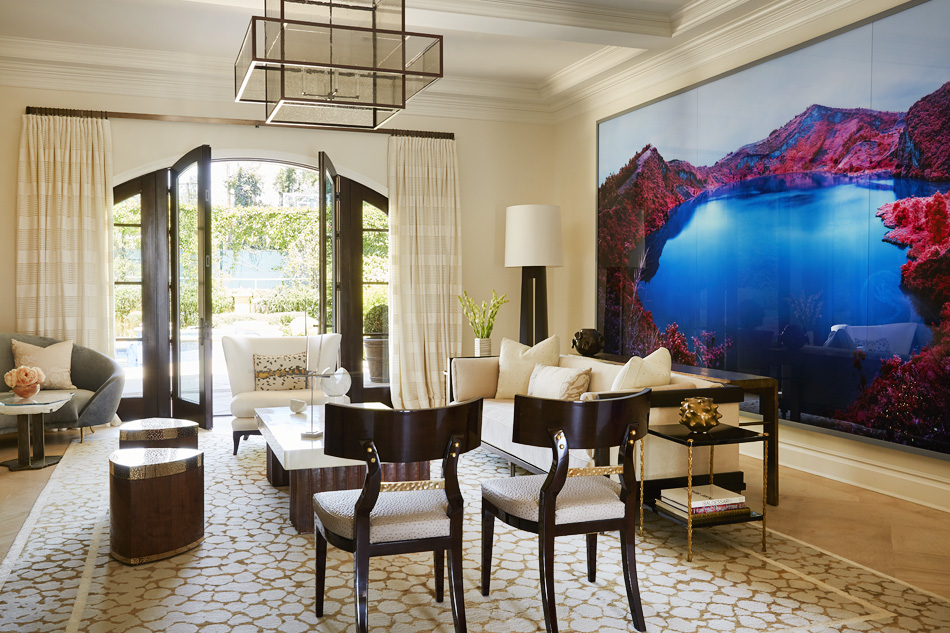 The neutral palette of this Brentwood living room keeps the focus on the vibrant, wall-sized photograph by Richard Mosse. The space also contains a Chambord sofa by Jiun Ho, Philip Nimmo Martin side chairs, a Mansour rug and a custom smoked-glass lantern chandelier by Grant Larkin. 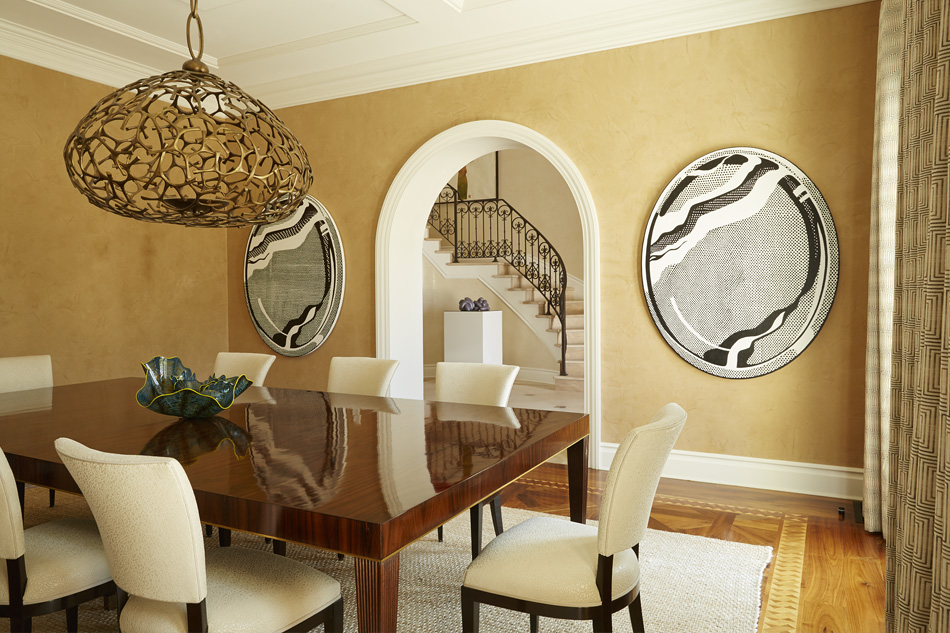 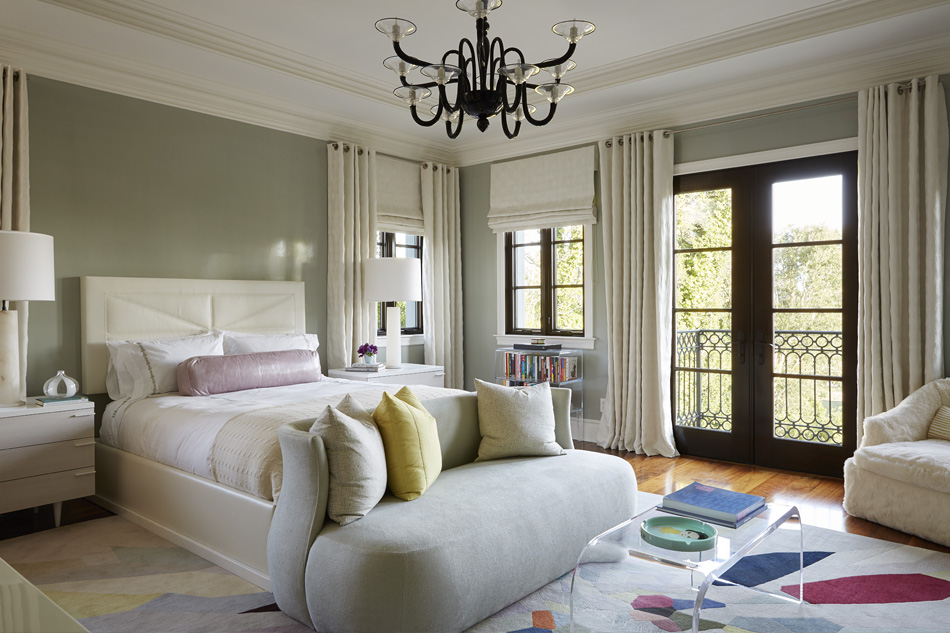 A girl’s bedroom in the Brentwood house contains an Isadora sofa by Baradaran positioned at the end of a custom embroidered bed and sitting atop a Zap rug by Fiona Curran. 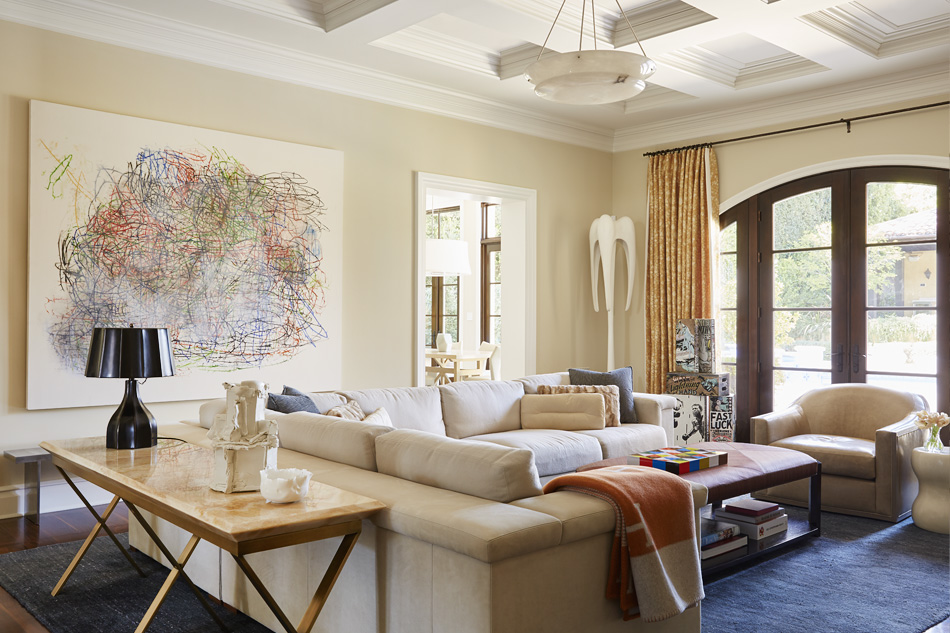 In the family room, a custom Chroma console by Baradaran is positioned next to a Newman sectional sofa by Troscan Design+Furnishings. The hemp area rug is by Mansour, and the Chifre floor lamp is by Jean de Merry. 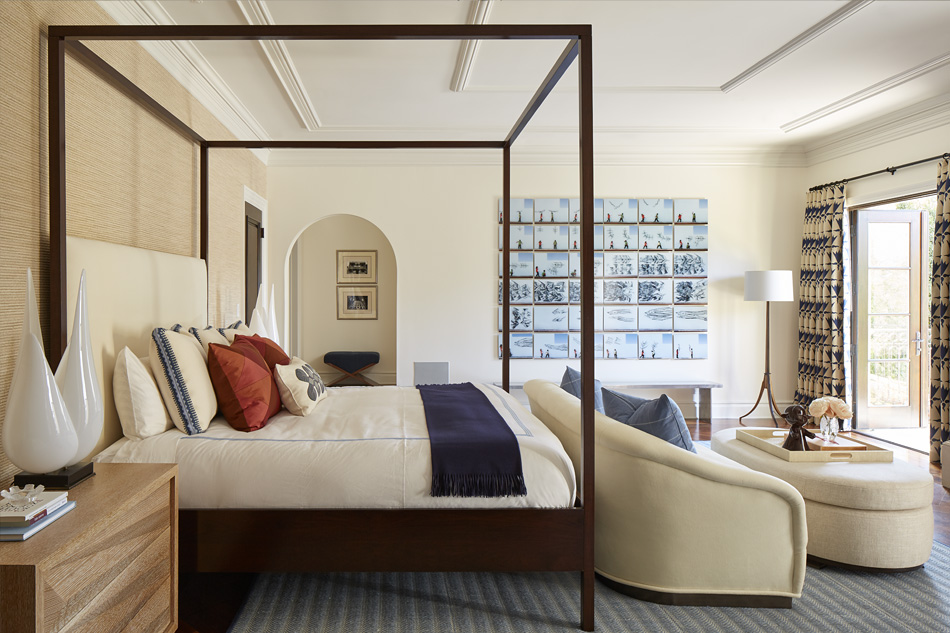 The master bedroom has a cerused-oak Karat nightstand by Baradaran beside the custom bed. The area rug is by Elizabeth Eakins. 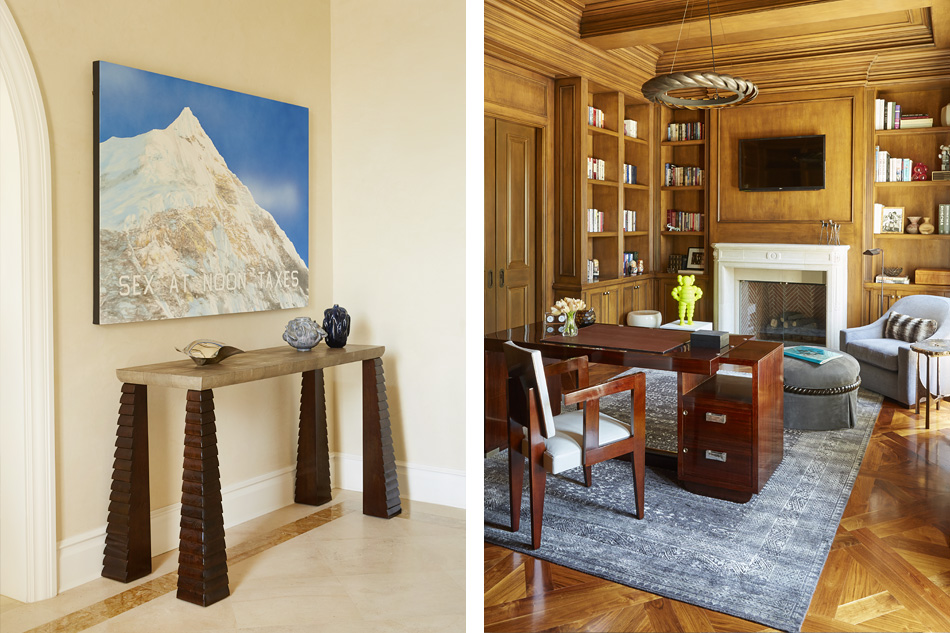 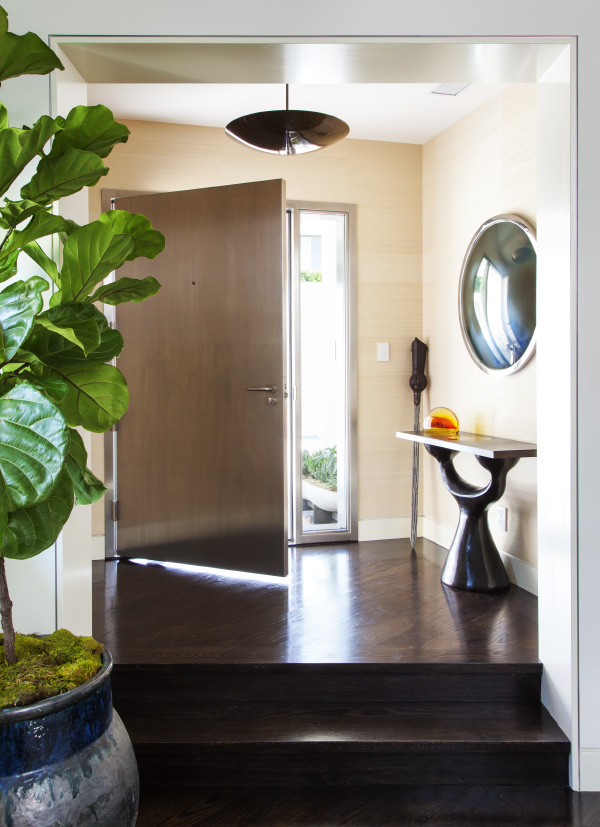 In the entryway of this Hollywood Hills home, a vintage Italian mirror from Eccola hangs over a Meline console by Alexandre Logé from Donzella.

When designing the home of a Brentwood family with an incredible art collection — think Ed Ruscha, Cy Twombly and Roy Lichtenstein, and then keep going — Baradaran stayed neutral and let the paintings and furniture color the interiors.

“I love the idea of neutrality and trying to give a feeling of richness based on texture and layering, the beauty of pieces and lines and architecture,” she says. “When I was spending time in Italy, everyone was saying, ‘Oh, you’re from L.A., everything in L.A. is beige.’ But I think it’s a challenge to make something really wonderful and visually pleasing with a neutral palette. And I don’t think everything here is beige.”

For splashes of color, look no farther than her recent California Spanish Revival project, which featured gorgeous, dominant architecture, including original terra-cotta tile work from the 1920s and ’30s. “The architecture was a really significant element of that house,” she says. “I didn’t feel right completely ignoring it and going in an entirely contemporary direction, and that was the main challenge.”

Those clients had children and pets, so colors came to the fore, the better to hide finger smudges and paw marks. Along with bright artwork and big carpets, Baradaran added furniture of her own design, placing her Cuff console in the living room, her Sempione bench and Collana mirror in the family room and her Dolce Far Niente lounge chair in the master.

With her own furniture designs, Baradaran has discovered another way to keep growing, changing, rearranging. “It’s great that, at this stage of my career, I have found another creative outlet,” she says. “It gives me that same excitement and energy that I got when I first started doing interiors.” 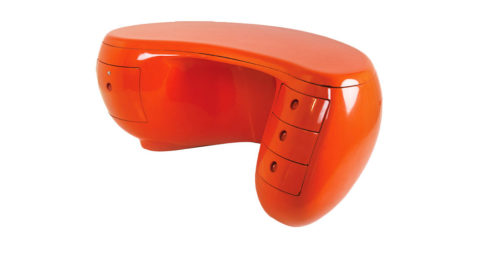 “Maison Gerard is always a stop for me when I am in New York. I love this desk for its lines and materials, and because coral is my favorite color.” 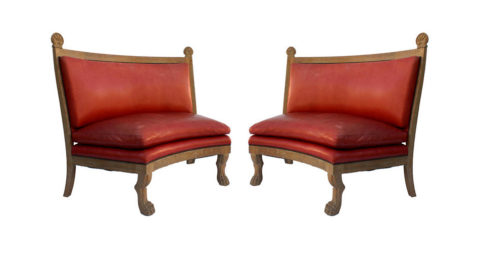 “It is inspiring to have our studio in the La Cienega Design Quarter and to be part of a community of the finest galleries in L.A. I love Downtown for its eclectic mix of pieces that are conversation starters for any interior.” 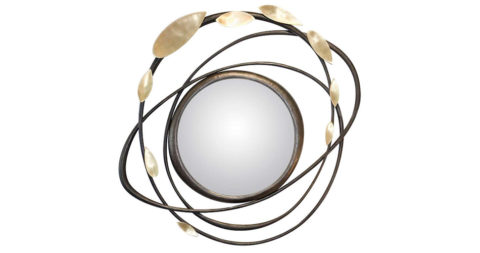 “I am a huge admirer of Herve Van der Straeten’s work. This mirror brings a strong feeling of movement — a constant theme in a lot of his works — that I especially love. We used a similar piece in a master vestibule, which became the focal point of the space.” 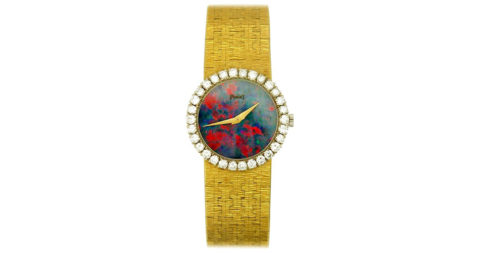 “I am a watch collector, and I love this vintage 1960s Piaget. It makes me think of my grandmother, who had one just like this. I love the mix of stone and metal, which I use and experiment with in my own furniture collection.”