Nicky Haslam Will Never Be Boring 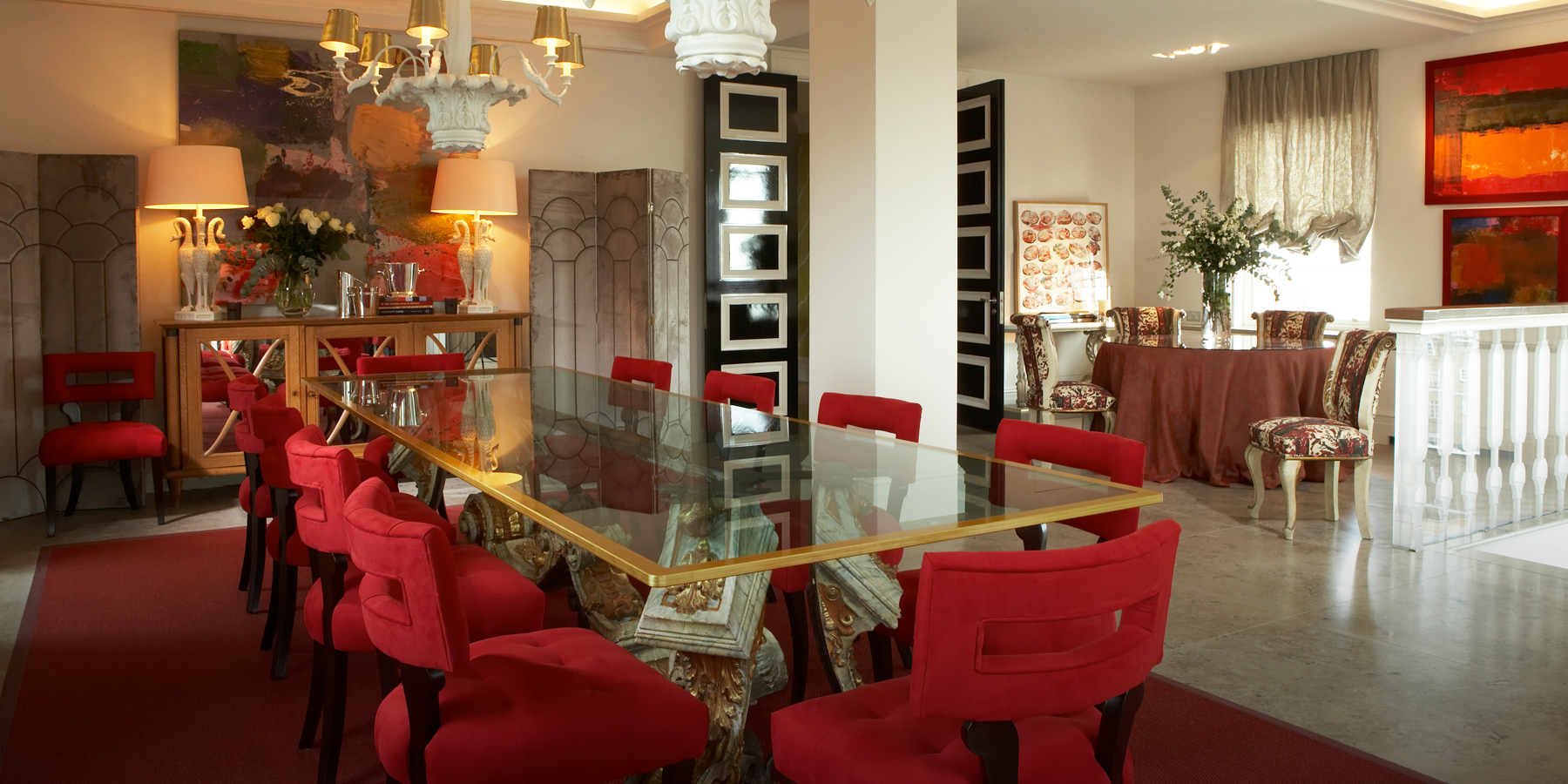 A consummate British bon vivant and raconteur, the celebrated interior designer and multifaceted polymath Haslam is on quite a roll: decorating homes from New Orleans to St. Petersburg, creating original fabrics and furniture and, now, releasing his first memoir. 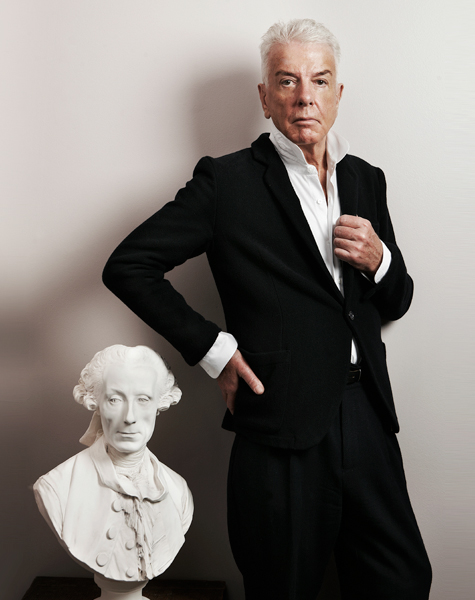 May 2010The celebrated British interior designer and socialite Nicky Haslam has dabbled in art and cabaret singing and has just come out with a memoir. Top: A penthouse triplex apartment on London’s Park Lane whose decoration Haslam oversaw in 2009. All photos courtesy of NH Design

It’s Oscar weekend at the reservations-only Polo Lounge at the Beverly Hills Hotel, and the decorator Nicholas Ponsonby Haslam, otherwise known as Nicky, is running late as he hurries toward our table. The restaurant is full of Hollywood players, including a young actress at a table nearby, a presenter at the Academy Awards, who is overheard to say, “I don’t think my character does that!” Amid the bustle of cell-phone chatter and glasses clinking, Haslam approaches with open arms, having just come from a morning appointment “up the hill,” on his way to a luncheon and, later, a book signing in Beverly Hills for his recently released memoir, Redeeming Features (Knopf). But for the next hour — over iced coffee and interrupted several times by friends and admirers, some of them overlooking well-known actors to make a beeline for the designer — the surprisingly warm and amiable Haslam talks about friends and clients, reminisces about times past and waxes poetic about the future.

From a very early age, Haslam, now 70, was a great noticer of details, perhaps spawned by his infection with polio at seven, which resulted in his being paralyzed and confined to a bed with limited access to outside stimuli for several years. He recovered in the Blue Room of the Great Hundridge Manor, a 1696 pink-brick William and Mary house, from which he would study the surrounding wheat fields and every color of the changing sky. A resourceful and privileged lot, his family laid low during the war years, as they lived under a direct flight path of the Luftwaffe bombers. Not immune to rationing, they subsisted on wild game, rabbit and squirrel (“pronounced delicious,” notes Haslam) caught by their chauffeur, who lived in what Haslam describes as a “hideous cottage” on the property. His beautiful, eccentric mother was descended from a long list of Honorable Sirs, Earls and Ladies, including her great-great grandmother Lady Harriet Spencer, an ancestor of Princess Diana, Haslam’s cousin. Like his mother’s side, his father’s family, one of the oldest in Britain, who became cotton tycoons in the late 19th century, had severe vacillations in wealth, but never status, through the generations. Neither side of the family was ever boring. 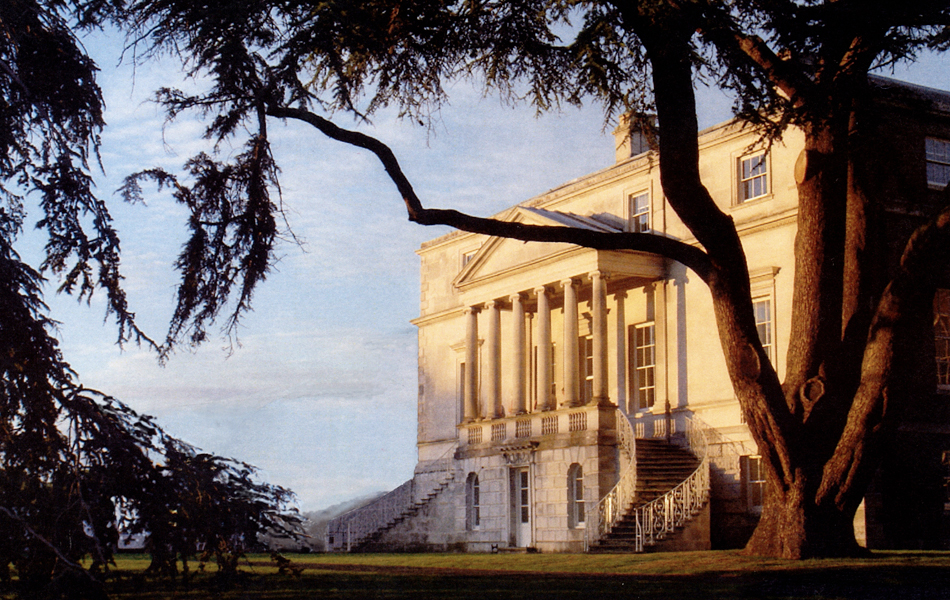 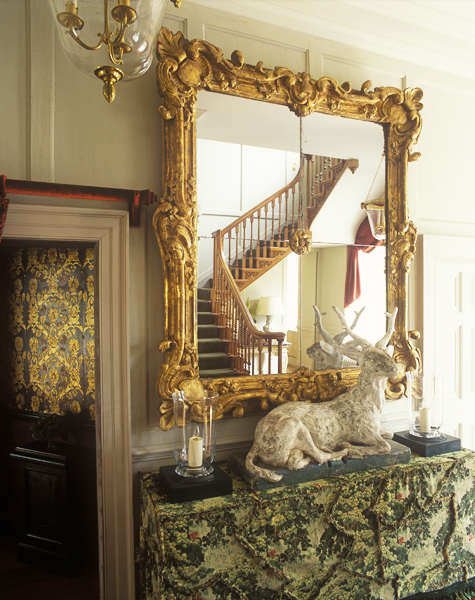 World of Interiors featured Haslam’s design for Stanley House, in London, on the cover of its March 2007 issue.

Haslam, an admittedly unfocused student, found solace in studying art, redid his room at Eton in faux ocelot, became a rather proficient watercolor artist and eventually found his own place in a gray-brick Regency cottage in London, where “for the first time in my life,” he writes in his memoir, “I had somewhere I could stamp with my emerging taste.” In 1962, he left two lights on at his cottage and traveled to New York with early supermodel Jean Shrimpton and photographer David Bailey on assignment for Glamour, the group sashaying through the brand-new terminal at Heathrow all dressed in black, Shrimpton in “thigh-high leather boots and narrow black dress” and he and Bailey in “tight black Mod trousers, black leather jackets and our pointiest winkle-picker boots.” Within three days of landing, Haslam had entered New York’s small, elite circle of artists, musicians, writers and creatives of all manner. As an Englishman, he says, he was still somewhat of a novelty, but his personal charm no doubt played a role in his instant popularity.

What was to have been a three-week excursion to New York soon turned into a decade, including a stint in the art department at Vogue under the inimitable Diana Vreeland. He met everyone, including Andy Warhol, for whom he starred, lip-locked with actress Baby Jane Holzer, in his film Kiss. He left Vogue to become the art director of the arts magazine Show, on whose November 1964 cover he placed Holzer, nude save for atomic globe sunglasses, a pilot’s cap and a tiny American flag. Love brought him west to Arizona and left him there; he came out to California for a time and, after redecorating his own and friends’ houses all over the States with aplomb, he came home to London in 1972 with a commission to decorate a townhouse for an important lord. 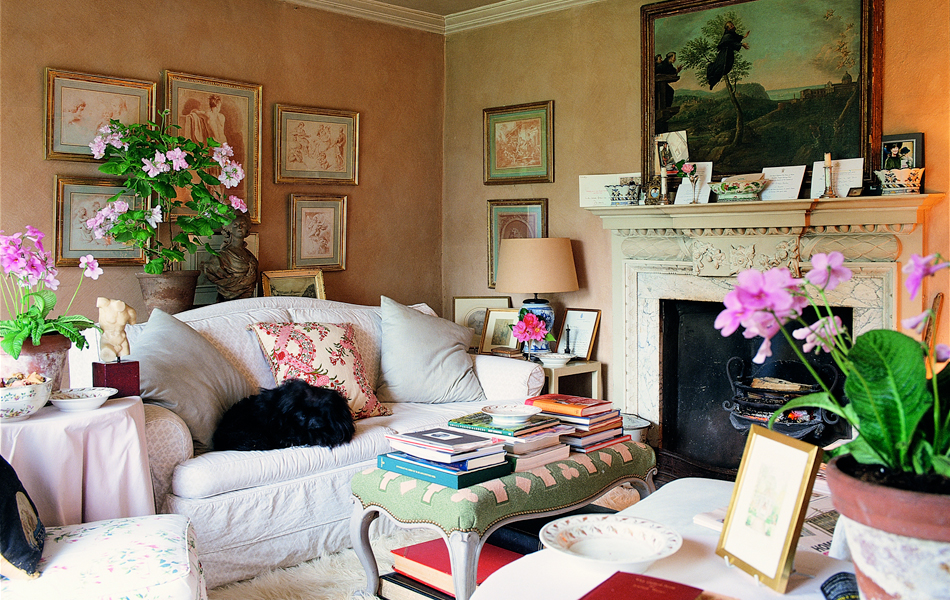 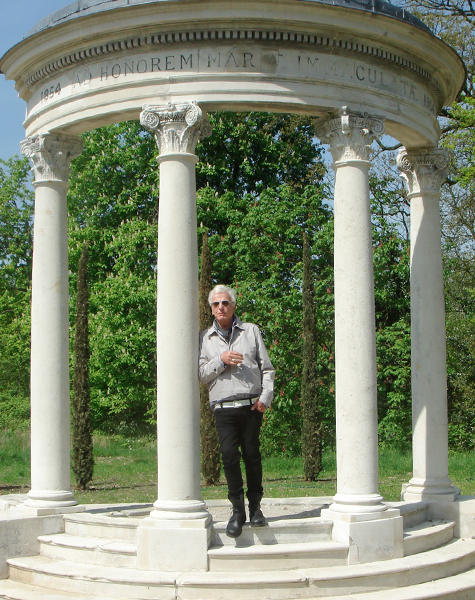 Haslam calls his chosen profession of decorating “the most pleasurable job ever,” and he describes himself as “unvain, generous, truthful, hair-brained, uncritical and self-critical.”

Haslam proceeded to build a design empire on classic English chintz and a discerning eye. He founded Nicky Haslam Designs, or NH Designs, shortly after settling back into the London scene, and he added to an already impressive list of clients the likes of Rod Stewart and Ringo Starr. “Ringo was wonderful to work for — he’s completely open to ideas, and neither he nor [his wife] Barbara had any sort of hang-ups,” says Haslam. “I’d done their flat in London first, then they bought this rather strange, rambling, added-onto country house. We made it seamless, which took quite a lot of skill — it was hard to match the red brick perfectly. We got the permission to rebuild in April, and finished by Christmas, because Ringo was good about making decisions. I wanted to create a room for his gold records and drums, sort of a baronial room, but it was the only thing he turned down — he thought it would look like he was showing off.”

As it turned out, Rod Stewart was the showier client, and Haslam decorated for him what he calls “a rambling mansion in Essex.” For the drawing room, the designer employed “Tudor plasterwork stalactites and did the whole room in one chintz — I love rooms in one chintz.” He also put in an elaborate latticework ceiling in the dining room (an effect he later used in mint green for the walls of a vacation home in Barbados). “I love ceilings,” says Haslam. “People forget about them, but I adore them. I’ve got a new passion: painting ceilings bright, shiny blue; I put one in a house in the South of France I just finished, as well as in a place in London. It’s a bit like the Cy Twombly ceiling in the Salle de Bronzes in the Louvre.”

His recent projects include a house in the French Quarter of New Orleans, which he is modernizing with sheer white curtains and Giacometti chandeliers, for repeat clients. “The three others I did for them are pretty Frenchified,” Haslam says. “This time, I said, ‘No French furniture,’ and they gulped, but it’s going to be pretty stunning. Instead of little bergère throughout, there are Christian Liaigre sofas and lacquer-green walls and a very Dorothy Draper fireplace — I’m so mashed on Dorothy Draper and American glamour from 1935 to 1960 right now.” There’s a flat in Moscow that he says “had been pretty horrendous, but we made it rather wonderful, and we made most of the furniture for it. We hardly ever buy off the shelf for my projects: We buy it from 1stdibs or we make it.” 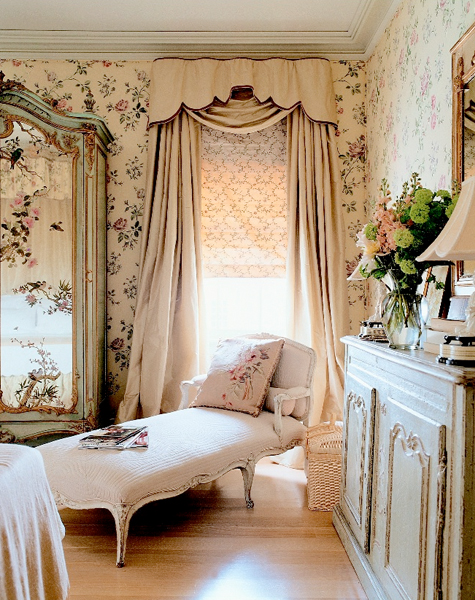 Haslam covered the walls of a recent New Orleans project in one of his signature chintz patterns.

In addition to furniture, he creates many of the fabrics for his projects. The designs in his new Random Harvest collection “all slightly have to do with nature in a certain way,” he says. The collection’s influences range from the poetic (“Roses in the Snow was named after a Revlon lipstick my mother bought; it has roses with a lot of glazed chintz thrown over it”) to the artistic (“Balustrade Stripe is designed after the shadow of a balustrade on a wall”) to the cheeky (“We call one Tigerwood,” he says with a sly grin).

He refers to his staff of around 20 as “motivating” and his right-hand women at his London office, Flora Connell and Colette Anthon, as “the saviors of my life.” As for the four-legged variety of saviors: “I’ve always had Pekingese,” he says. “I swore I’d never have another dog; then, of course, I went to the breeder and bought twins — a boy and a girl — I gave them to Colette for her house in London. Zsa Zsa’s the girl and Zephyr, the boy. All my Pekingese have to have zed names, and they have to be black. I’ve had about fourteen. I learned to love dogs from Tallulah Bankhead; she had Shih Tzus.” Unsurprisingly, he was an enthusiastic participant during the heyday of exotic pets. “I wish I still had monkeys, but that’s just too difficult now. I want lemurs, or woolly monkeys, and I’d love a panda, or a baby giraffe. Lady Canmer, who had giraffes, made Louis Vuitton make giraffe-shaped traveling cases for her.”

For all his design experience, Haslam has only had one falling out with a client, one he could hardly be blamed for. “I had copied the Amber Room in Catherine Palace in St. Petersburg for a Russian house and showed the client the sketch, which he apparently thought was wood,” he says. “After he saw the finished room, he screamed, ‘I vanted vood!’ And that was the end of that.” 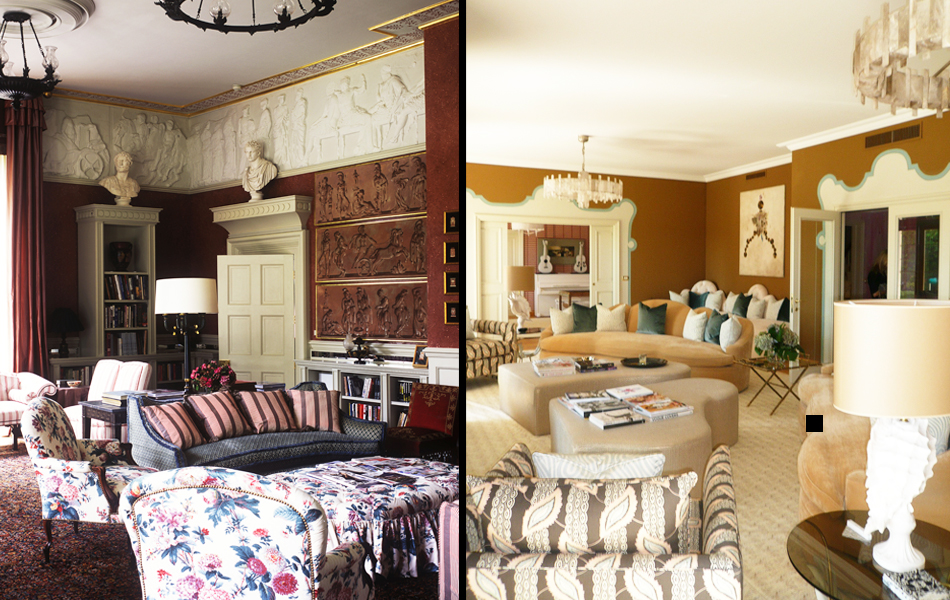 Left: The drawing room of a London mansion Haslam worked on in 2005 features a frieze made from the original castings from the Parthenon. Right: The living room of a recently completed residence in Monte Carlo demonstrates Haslam’s belief in creating interiors that are distinctive yet timeless. 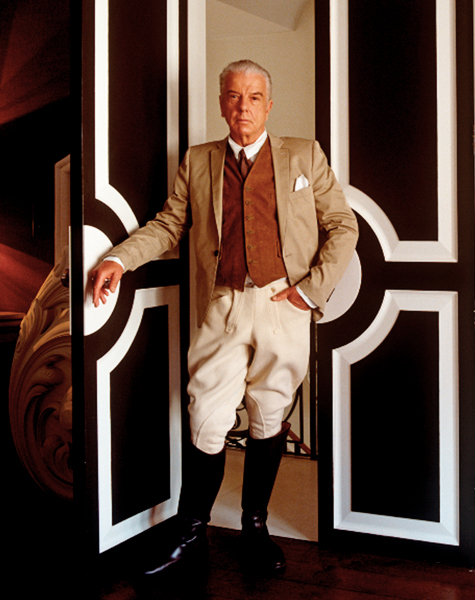 Haslam poses in London, in a Dorothy Draper-inspired doorway he designed for music producer Nellee Hooper.

He describes decorating as “the most pleasurable job ever,” and when asked to define his style, he says, “I tend to have a very original approach, I think, and my work is never a copy of anybody else’s — although I once ripped off an amazing room by Stephen Sills.” His design dictum is that rooms have to have “a kind of newness as well as a timelessness, but still be up to date — not too tried, and not too trad. I’m not a restorer; I’m a decorator.” Given the chance to choose a few words to describe himself, he chooses “unvain, generous, truthful, hair-brained, uncritical and self-critical.” He says the thing he likes best about growing up is “getting richer, really, and more assured. And I find young people so fascinating as I get old. I didn’t know children when I was young; I was brought up to be a grown-up, so now that I am very old I love being with young people. They keep one constantly entertained and exhilarated.”

Haslam, clearly exhilarated by his present company at the Polo Lounge, waves to an acquaintance, who waves back. A woman who handles couture for a major French brand runs up to him and kisses him on both sides of his face. “Nicky, you must come to Paris,” she says, to which he answers, “Of course!”

As the interview wraps up and Haslam is about to be late for his next appointment, before he flies out the next day to New Orleans then Miami, a film producer from New Zealand approaches the table. “Excuse me,” he says politely, and turns to the interviewee. “Are you Nicky Haslam? I have some opportunities I’d like to discuss with you.”

When you’re Nicky Haslam, it seems, someone always does.