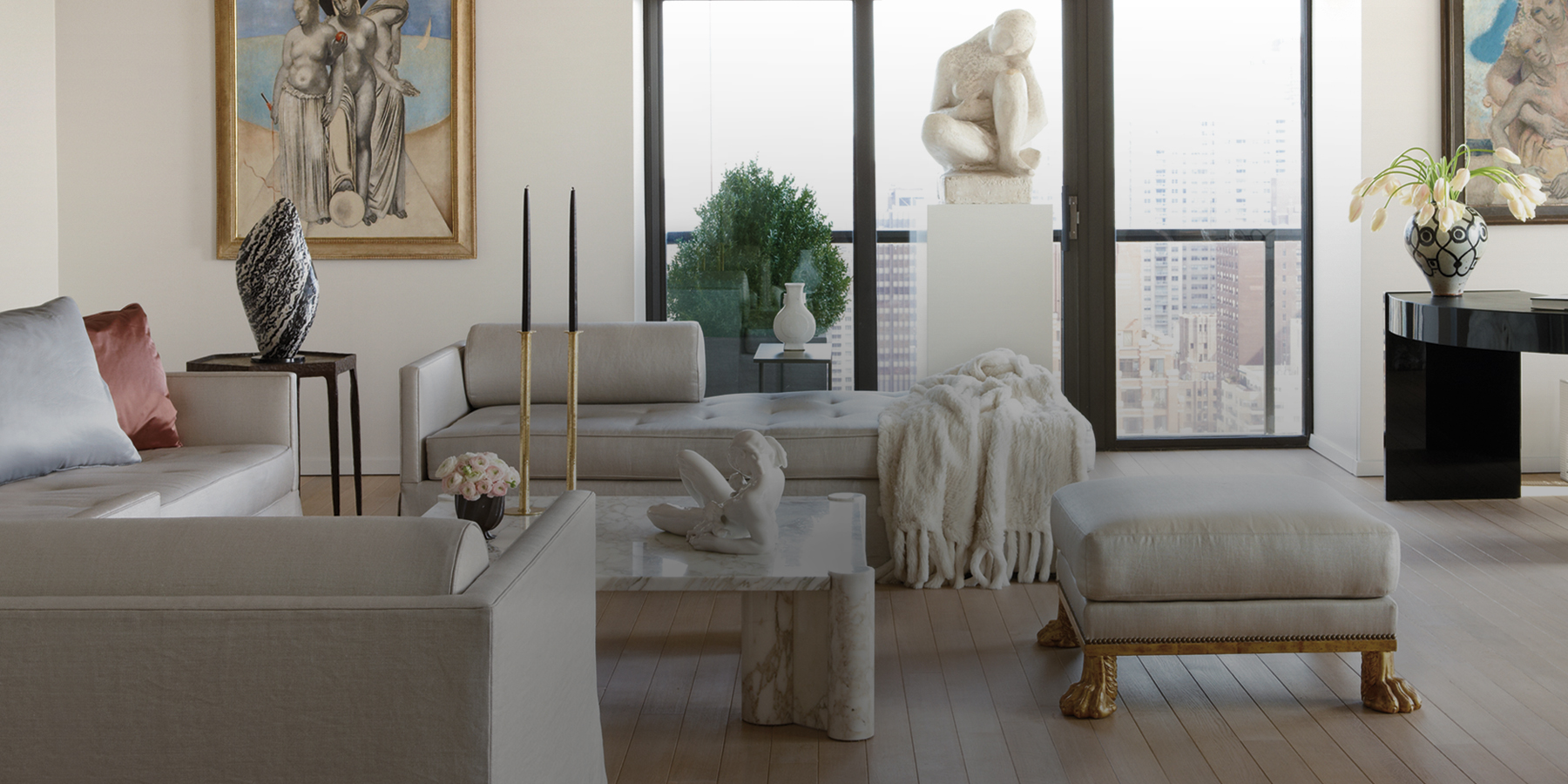 This Cuban refugee has made an extraordinary life for himself by making extraordinarily beautiful homes for the world's most discerning elite. 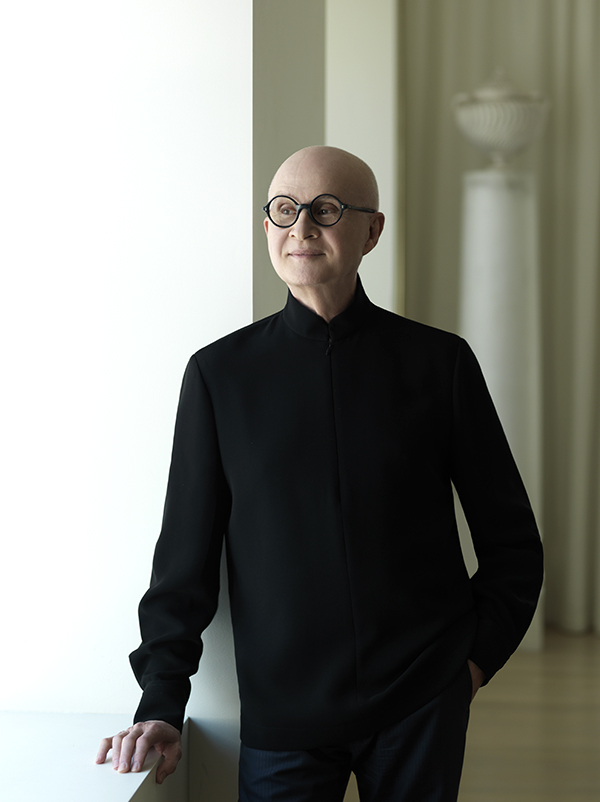 Gauzy white linen curtains billow in the breeze in the Pacific Heights penthouse of the architect and interior designer Orlando Diaz-Azcuy. The muted afternoon light catches the silver glimmer of the designer’s collection of Josef Hoffmann bowls on a parchment-colored coffee table.

“I’m a modernist; I’ve always been a modernist, but my interiors have a certain sensuality and voluptuousness,” says the 76-year-old designer commenting on his surroundings. “Even when modernism was not popular in San Francisco, I preferred simple and elegant interiors created by rigorous editing, not by adding decoration.”

Dressed with snappy simplicity in a sculptural dark Yohji Yamamoto tunic, navy Junya Watanabe slacks and classic white Converse sneakers, he exudes the serenity of a contented man — and, well, he should, as he’s constructed a rather marvelous life. It’s especially fortunate when you consider that he left Cuba alone in 1962. A 23-year-old architecture student, he landed in Miami wrapped in a Red Cross blanket, his only material possession. Part of his luck, as he sees it, was his choice of architecture as a profession, since it has offered him such a long and rewarding career.

Now, having practiced for some 50 years, he recently transferred ownership of his celebrated San Francisco firm Orlando Diaz-Azcuy Design Associates (ODADA), to his two longtime partners, interior designers David Oldroyd and Greg Stewart, so that they can handle the day-to-day management of the 20-person firm. It’s the ideal arrangement for everyone. “Orlando has an amazing business intuition,” observes Oldroyd, who describes his former boss’s continuing advice as “invaluable.” Released from the responsibilities of running the company, Diaz-Azcuy is now entirely focused on his passion for designing new interiors and collections. “Orlando is working as hard as the day I met him three decades ago,” says Oldroyd. “He truly lives and breathes design in all aspects of his life.” 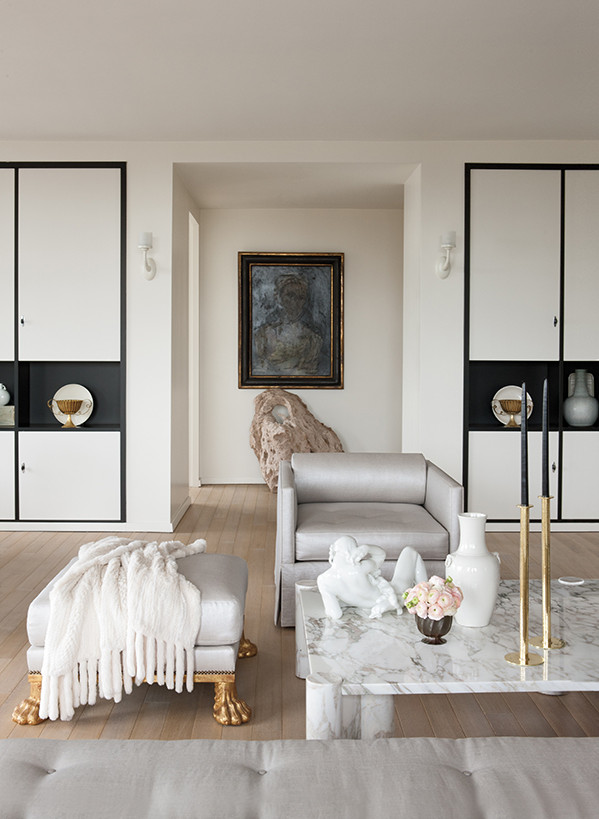 Another view of Diaz-Azcuy’s living room reveals both the rigor and sensuality of his aesthetic. The marble coffee table is by Gae Aulenti and the gilded claw-foot ottoman Victorian. The golden coupes on the shelves are by Josef Hoffmann, and the sconces are by Diaz-Azcuy for Boyd Lighting. Photo by Melanie Acevedo

Diaz-Azcuy certainly remains prolific. Earlier this year, JANUS et Cie introduced his chic collection of neoclassical powder-coated aluminum outdoor furniture called Quadratl, a reference both to its decorative square motif and to the nickname of Hoffmann, whose designs have long been an influence. Next fall, the furniture maker Matsuoka will launch a special collection of cabinetry, tables and chairs designed by Diaz-Azcuy in an assortment of exquisite wood veneers and exotic lacquer finishes.

One of his grandest new projects is designing the commercial and residential lobby, sales offices and amenities floor for 181 Fremont, an ultra-luxury, high-performance, mixed-use tower now under construction in San Francisco’s SoMa district, which when it’s finished, will be the tallest building in the western United States. In keeping with his approach to understated opulence, Diaz-Azcuy has specified marble floors, baseboards and door frames in the public corridors, and each of the 67 private apartments will have highly lacquered front doors with French brass hardware “in the manner of gold.” He has also planned the layout of the apartments and selected their finishes, the hardware of the fixtures, cabinetry and appliances.

When Diaz-Azcuy arrived in the U.S., he might have lacked possessions, but he was already cosmopolitan in his tastes. “Havana was very stimulating for an architecture student,” he recalls. The city had a rich and diverse architectural heritage dating from Spanish-Colonial times. In addition, when Diaz-Azcuy was a student, there were numerous native-born modernists practicing in the city, along with such celebrated foreigners as Walter Gropius, Richard Neutra, and Oscar Niemeyer. 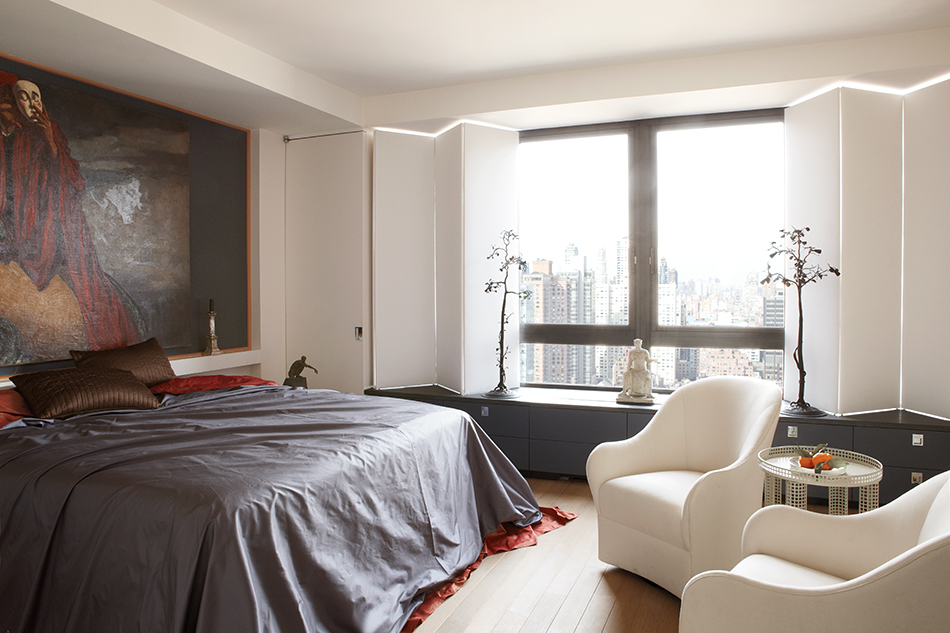 Diaz-Azcuy designed the club chairs and the window screens in his New York bedroom. The oil painting is entitled Les Masques and was painted in the 1930s by renowned Catalan muralist José María Sert y Badía. The white side table is actually a perforated metal flower stand designed by Hoffmann for the Wiener Werkstätte, circa 1910. Photo by Melanie Acevedo 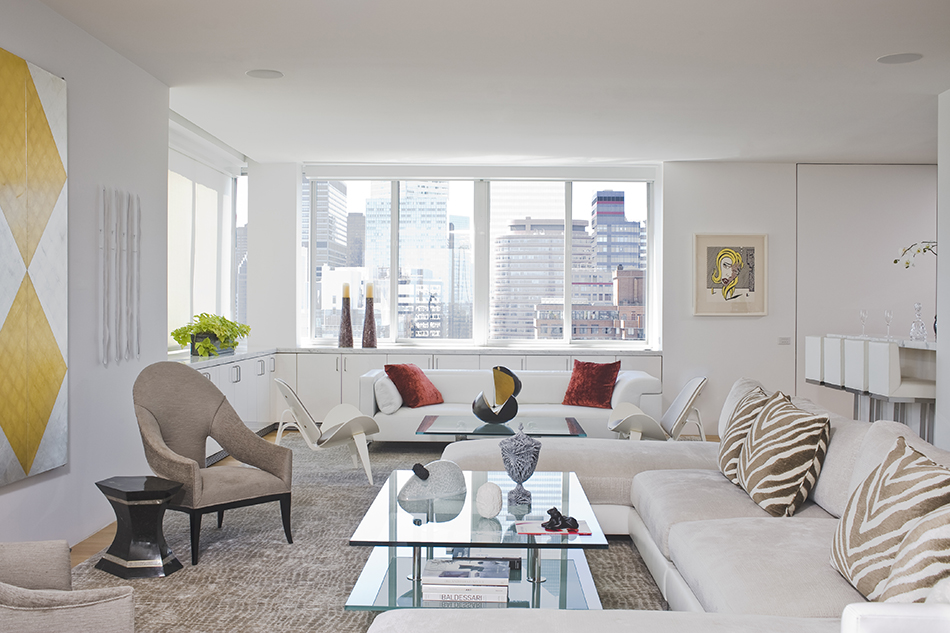 For a modern New York duplex, Diaz-Azquy kept largely to a beige and taupe palette, letting it serve as a neutral backdrop for the client’s important collection of postwar and contemporary art. The 1950s Italian armchairs in the foreground and Hans J. Wegner‘s 1963 Shell chairs in the background add rhythm and curves to the otherwise angular living area. Photo by John Hall 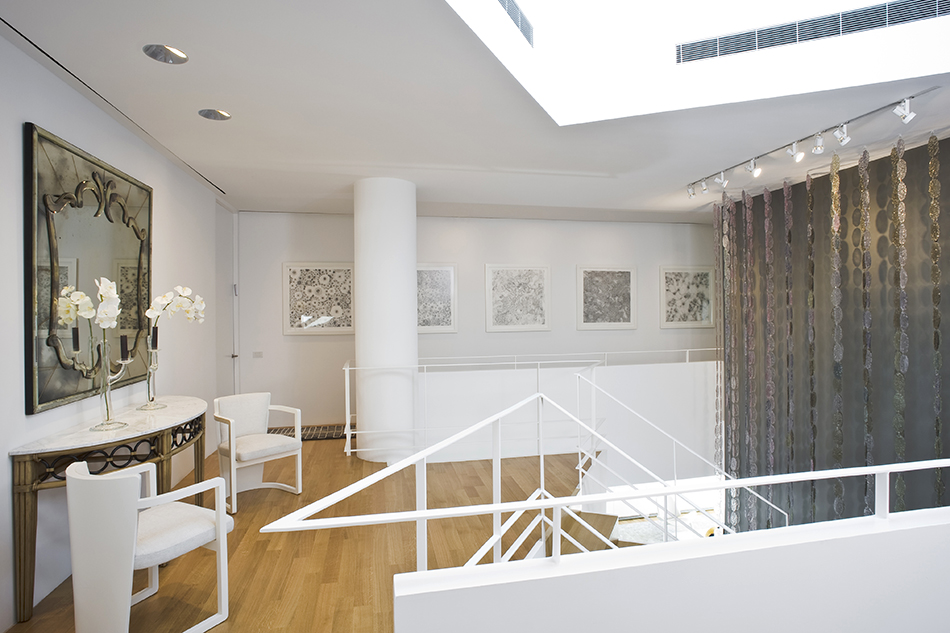 A Vistosi glass curtain from the 1970s plays counterpoint to the apartment’s angular architecture, as does the ornate burnished glass mirror and console table, a Diaz-Azcuy design for McGuire. The chairs were designed by Wiebe Vos for Hugues Chevalier in the 1930s. The wall art series is by Tara Donovan. Photo by John Hall 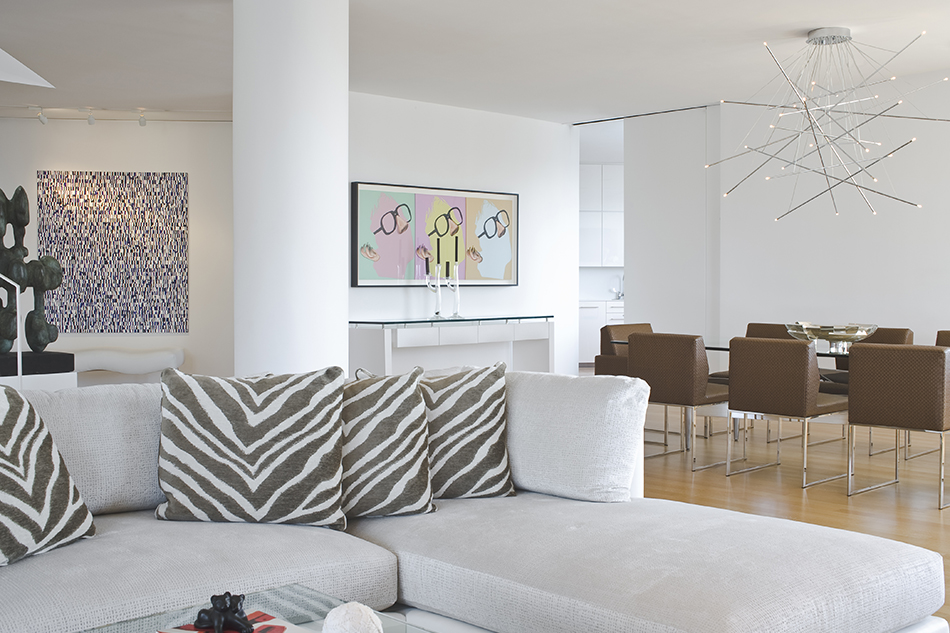 The neutral decor enables the eye to focus on such notable art works as a François Stahly‘s bronze sculpture from the 1960s, Robert Greene’s 2011 oil-on-paper Eli and a John Baldessari painting hanging over the console. Diaz-Azcuy designed the chandelier. Photo by John Hall 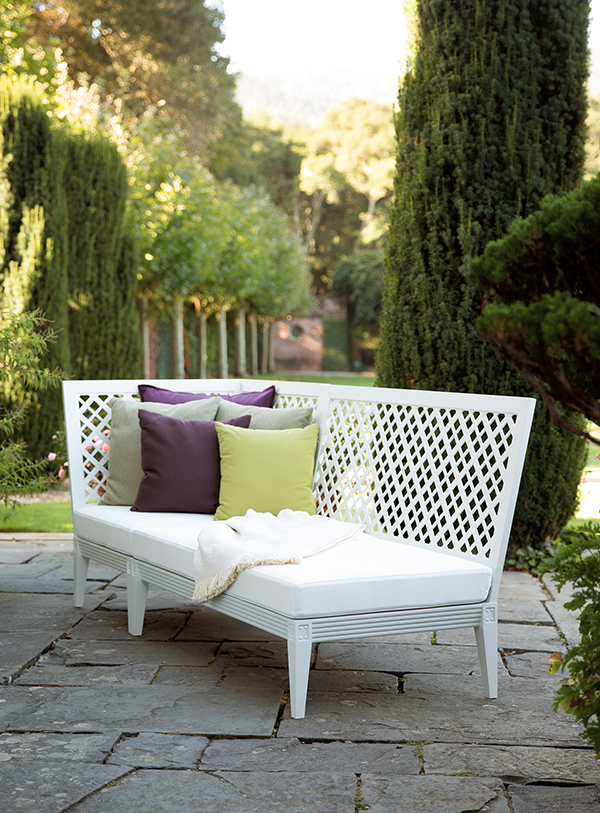 He continued his architecture studies at Catholic University in Washington, D.C., excelling even though he barely spoke English and so had to write his notes phonetically. He then went on to the University of California at Berkeley, where he earned master’s degrees in both landscape architecture and regional and city planning. Upon graduating, he was hired by Lawrence Halprin, the highly influential Bay Area landscape architect. Then, in 1975, he changed direction and joined the corporate interior design company Gensler, soon becoming its youngest design principal. Eleven years later, he left to set up his own studio, which quickly became the city’s go-to firm for a luxe yet reductive modernism.

“My first ten years were spent studying American culture and trying to fit in,” recalls Diaz-Azcuy, who never returned to Cuba or saw his parents again. With the loosening of U.S. travel restrictions, he’s thought about visiting the island, although without much enthusiasm. But it’s hard not to consider it, especially since he’s frequently in Miami these days, supervising work on the sleek interiors of a dramatic Richard Meier–designed triplex with a swimming pool on the roof. Diaz-Azcuy won’t disclose that client’s name, but some of the one percent who live in his firm’s artfully conceived realms include the Hong Kong magnate Sir Michael Kadoorie, cosmetics mogul Leonard Lauder and Hyatt heir John Pritzker and his wife, Lisa.

“I am traveling a lot, working on the largest projects of my career,” says Diaz-Azcuy. “It’s very exciting to be working in Miami, and the Hamptons and California.” When he first arrived on U.S. soil, his biggest dream was to someday live in New York. Some 15 years ago, he realized that fantasy when he became bicoastal, setting up a second home and office in a Midtown Manhattan high-rise. He adores the city’s distinct energy and culture, especially its theater. As a contrast to the bustle of the street below, his New York aerie, situated on the 48th floor, is a calming refuge of pale tones and black accents with views of the East River.

This meditative sitting room in a San Francisco residence is an exquisite composition of styles and eras. The rather primitive-looking black lacquer chair was designed by Elsie de Wolfe, while the refined tub chair is 1930s Italian. The low wood table with chrome supports is French modern. On it sits a sculpture of polished granite by Masatoshi Izumi, an associate of Isamu Noguchi. The canvas above is by Bay Area painter John Zurier, and the rug with its tribal decorations is from Samarkand. Photo by Nathan Kirkman 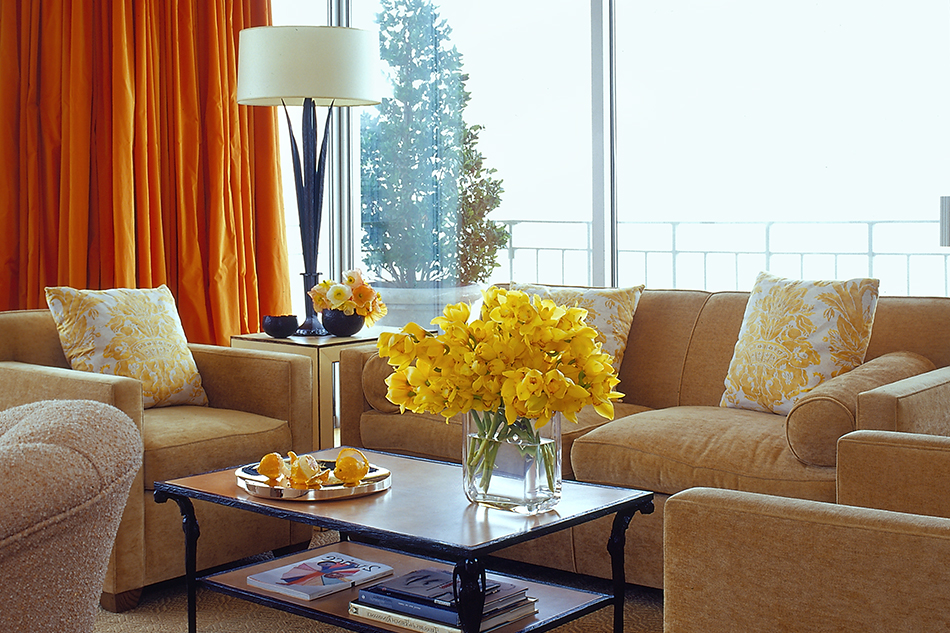 Tangerine-hued draperies add warmth and drama to the subtle honey-toned living room of another San Francisco residence. The custom lounge chairs and sofa are upholstered in beeswax-colored chenille fabric. The bronze coffee table is a commissioned piece with a cream parchment top by Ingrid Donat. Photo by Nathan Kirkman 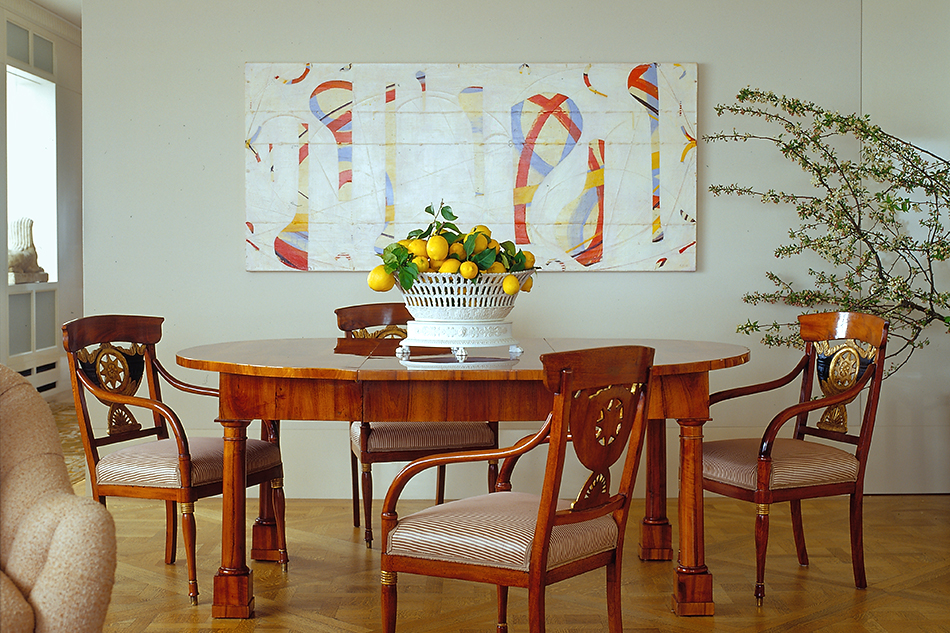 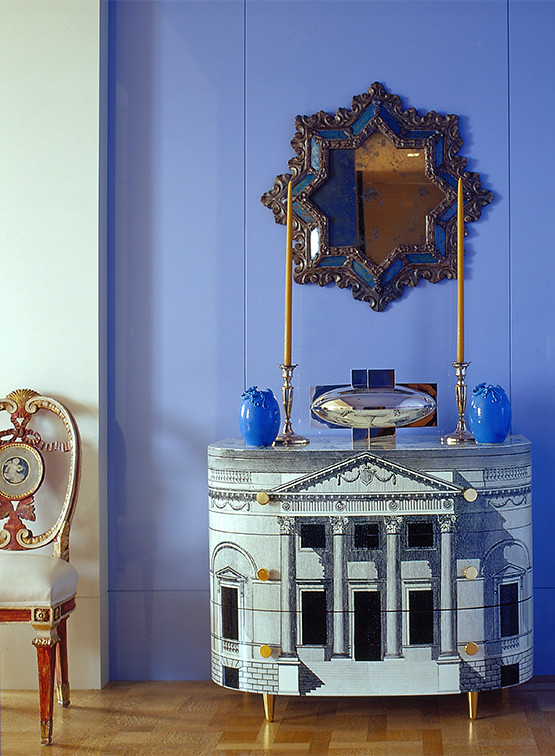 The entry foyer of the San Francisco residence features blue lacquered walls adorned with an 18th-century Spanish giltwood and blue-glass mirror. The demi-lune cabinet is a 1960s piece by Piero Fornasetti, on top of which sits a silver art vase by Damian Garrido. Photo by Nathan Kirkman

Unexpected pairings have been a signature of Diaz-Azcuy’s work since early in his tenure at Gensler, where he once proposed graceful peach-colored upholstered chairs for the all-white reception area of a modern corporate office — this at a time when gray industrial carpeting was all the rage. Today, in ODADA’s elegant all-white studio conference room in downtown San Francisco, a weatherworn 19th-century English marble bust gazes over a sculptural 1970s gray marble coffee table by Gae Aulenti. “In some way, my whole career has been spent updating the classical tradition and infusing modernism with poetry and hedonism,” he observes.

When he wants to escape San Francisco’s fog during weekends back on the West Coast, Diaz-Azcuy repairs to sunny Marin County, where he is remodeling a mid-century house in a quiet corner of Lucas Valley with views of a nature preserve. It’s part of a subdivision that was built in the 1960s by the visionary tract-housing developer Joseph Eichler, who worked with a handful of talented young West Coast architects to create affordable modernist homes. Diaz-Azcuy has taken the Eichler residence and given it his signature glamour, adding glossy white interiors, white marble detailing, limestone floors, ivory lacquered cabinetry, white wicker furniture, fine modern art and écru linen — all at once both very luxurious and very understated.

“A successful interior design is the result of first perfecting the interior architecture, so that function and aesthetics can seamlessly follow,” he says “I create a harmonious background. I avoid excess in architecture. That has been my approach from day one. I never followed trends.”

His life today is hectic, he happily notes — clients call at 2 a.m. to discuss potential art acquisitions, and they offer to send a plane to speed him to an art exhibition — but his creative spirit has been set free for the first time. “Designing today is effortless for me,” said Diaz-Azcuy. “In two quick sketches, I get instantly to where I want to go. The data stored in my mind is quickly accessed. It’s pure pleasure. Absolutely. I’m where I always wanted to be, one-hundred percent devoted to my work.” 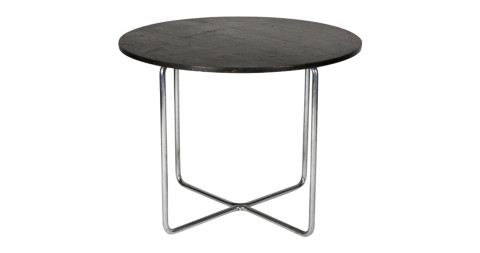 Any quintessential Mies van der Rohe piece adds an element of refinement and style to an interior. 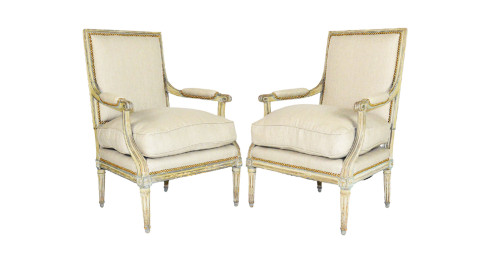 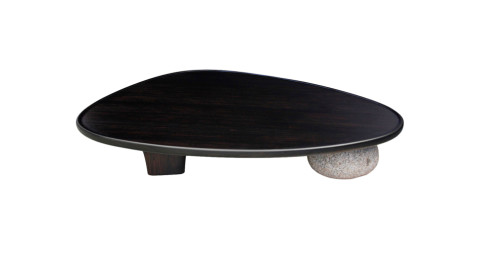 A practical and modern art piece 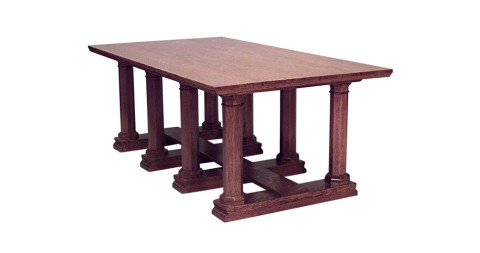 A traditional, rich wood table — elegant — that adds warmth to any modern interior and feels appropriate in a traditional one 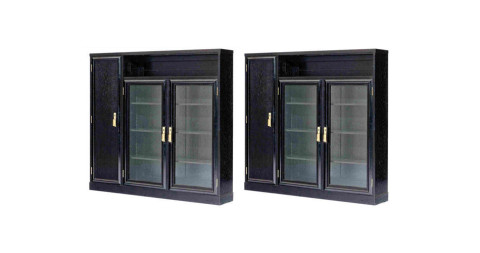 Shop Now
School of Josef Hoffmann pair of bookcases, ca. 1910, offered by Bel Etage
No one could be as modern as Hoffman was in 1910, and he is still avant garde 100 years later. Incredibly elegant, these pieces can make a room by themselves and are still practical. 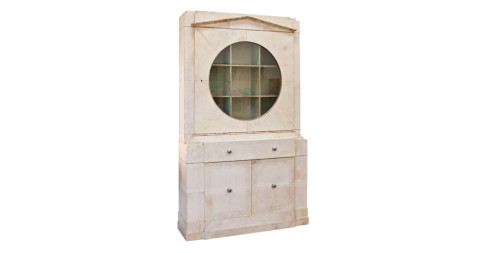