Oscar Heyman Has Been Making Marvels Since 1912, Including Liz Taylor’s Most Famous Necklace 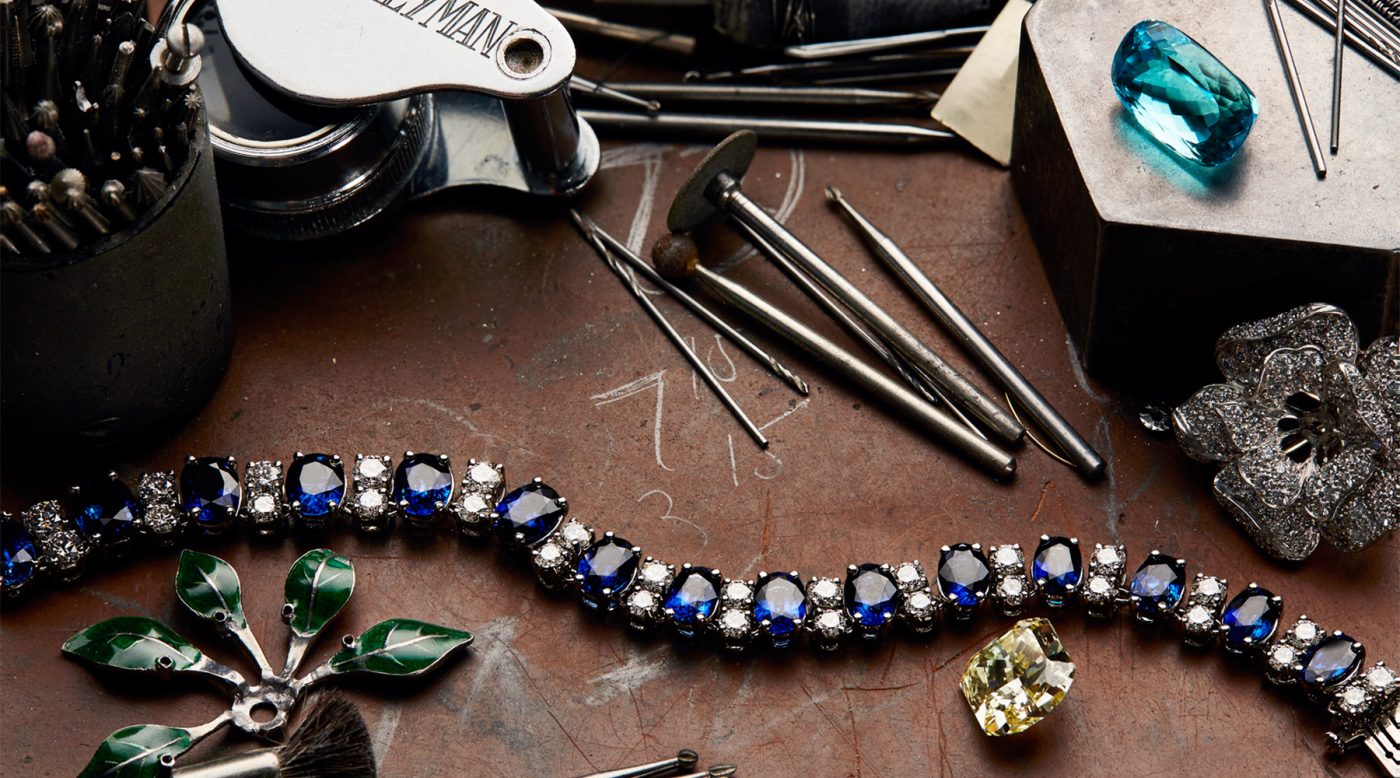 The New York firm not only creates its own standout pieces but has also been the go-to manufacturer for other jewelers for more than a century.

September 5, 2021In October 1969, the New York Daily News headline “Liz Gets That Peachy Pear” was one of many announcing that Richard Burton had purchased a 69.42-carat pear-shape diamond for Elizabeth Taylor from Cartier. At the time, the just-over-one-million-dollar price tag made the stone, which eventually became known as the Taylor-Burton Diamond, the most expensive in the world.

One of the terms of the sale was that the gem would go on display at Cartier in New York for a week before it was sent to the celebrity couple. Three thousand people a day went to the jeweler’s flagship store on 52nd Street and Fifth Avenue to see it.

While the media reported on the acquisition and exhibition, they didn’t know anything about the necklace being made for the gem by Oscar Heyman, a manufacturer hired by Cartier. In fact, a lot of Heyman’s illustrious history has been hidden behind the scenes.

Founded in 1912 by Latvian emigré Oscar Heyman, the company has long been known as “the jeweler’s jeweler” because of its superior workshop and its skill in 20th-century manufacturing techniques. These attributes are why jewelry experts and collectors seek out its work today, and they’re among the reasons that Cartier commissioned it to make the Taylor-Burton Diamond necklace.

Another reason was the long relationship between the two firms. Shortly after Heyman immigrated to New York, in 1906, he went to work in-house as a master jeweler for Pierre Cartier, who ran the stateside operation of the French maison.

Six years later, Heyman established his own workshop with his brothers Nathan and Harry. Cartier became a client, along with several other esteemed jewelers, including Tiffany, Theodore B. Starr and Black Starr & Frost.

Today, a tour through the Oscar Heyman studio and workshop in Midtown Manhattan is like a walk through the history of American jewelry over the past century. The company has file cabinets filled with around 200,000 meticulously organized designs in gouache on vellum and sketchbooks of ideas dating back to its beginnings.

The workshop includes decades-old special equipment of all kinds, like the massive die-stamping device the firm used to create platinum settings for gem-set line bracelets during the 1920s. And craftsmen at benches in the shop practice time-honored techniques, such as wire pulling (easing gold through holes in a metal plate to transform it into wire) and thrumming (a traditional polishing method employed on every Oscar Heyman setting before the stones are mounted).

Oscar Heyman became so well known for its manufacturing expertise that in the mid-20th century, by popular demand, the firm started producing jewels under its own name and selling them through smaller retailers across the country. At the same time, it continued to work on special projects for longtime clients like Cartier.

But although the company has made many stunning jewels over the years, none was as exciting to produce as the necklace for the Taylor-Burton Diamond.

Oscar Heyman was given six days to make the piece, composed of pear-shape diamonds, each set at an angle. It was precisely measured to fit Taylor so that the large pear-shape pendant would nestle in her décolletage. The craftsmen worked day and night on the production.

“We didn’t know why they needed the jewel so quickly, but we got the job done,” says Harry Heyman’s grandson Tom Heyman, who joined the family business in 1987.

“My first cousin once removed, Adam Heyman, met the Cartier salesman in a cab with the Taylor-Burton Diamond necklace,” he recounts. “We found out later the man from Cartier was en route to Europe to present the piece to Elizabeth Taylor.” The actress debuted the jewel at Princess Grace’s 40th birthday party in Monaco in November 1969, less than one month after the sale of the stone.

Here, Introspective talks further with Tom Heyman, a principal of the firm, about the history of Oscar Heyman and the jewelry it makes today.

How would you describe Oscar Heyman jewelry?

Gems are the stars of the jewels. We deemphasize the metal. We want things to be pretty and have an heirloom quality. We want clients’ grandkids to fight over who gets to keep the jewels as opposed to who sells them.

What types of gems are Oscar Heyman signatures?

Emeralds, rubies, sapphires and diamonds are staples in our work. We’ve always loved the star stones, such as alexandrites and cat’s-eye moonstones. We’re attracted to bright, feminine colors with an inner life, like Paraíba tourmalines, lagoon tourmalines and rubelites. Above all, the gems have to be gorgeous.

Do you make new designs these days or rely on your archive or both?

We make new designs all the time and look into our archives for inspiration. We don’t make an exact copy of something from 1927. We’ll change the proportion or details to reflect twenty-first-century taste.

What are some of your most popular designs today?

The item we make the most, with all sorts of variations, is the Entourage ring. The original design in our archives dates back to the nineteen forties. Entourage is derived from the French word for “surround,” and in the design, a center stone is encircled by diamonds in fancy shapes, like ovals.

For the past twelve years or so, we’ve been making a lot of scatter bracelets. They’re about a half inch or an inch wide and set with randomly laid-out stones.

The company is known for designs that endure. Yet the way the actor Billy Porter styled three Oscar Heyman flower brooches at the 2019 Golden Globes put the firm and its style right on the cutting edge of fashion and the new wave of men wearing fine jewelry. Can you tell us how that moment happened?

We met Billy through a dress designer located in our building. The designer picked the flower brooches for him to wear because they matched the embroidery on his suit and cape.

It was wonderful to work with him, and he looked like he was having so much fun. Truly, the situation was sort of like the Taylor-Burton Diamond necklace in that it happened through personal relationships. They were both wonderful, real moments in our history. 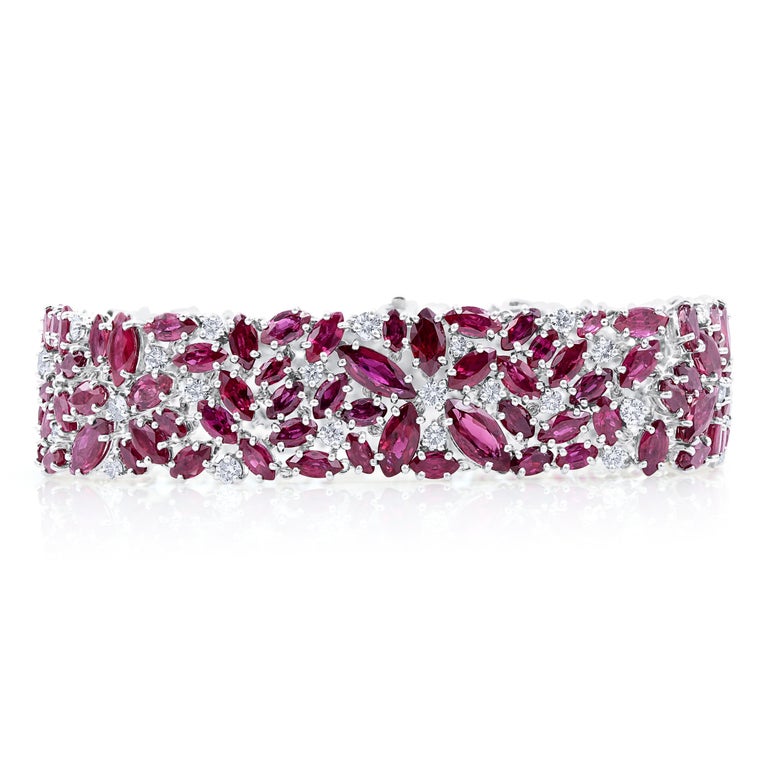 “This type of bracelet, where the stones appear to be woven together, is a signature of ours. We go to great lengths in our workshop to ensure the flexibility of the finished piece so that it feels as good as it looks being worn.” 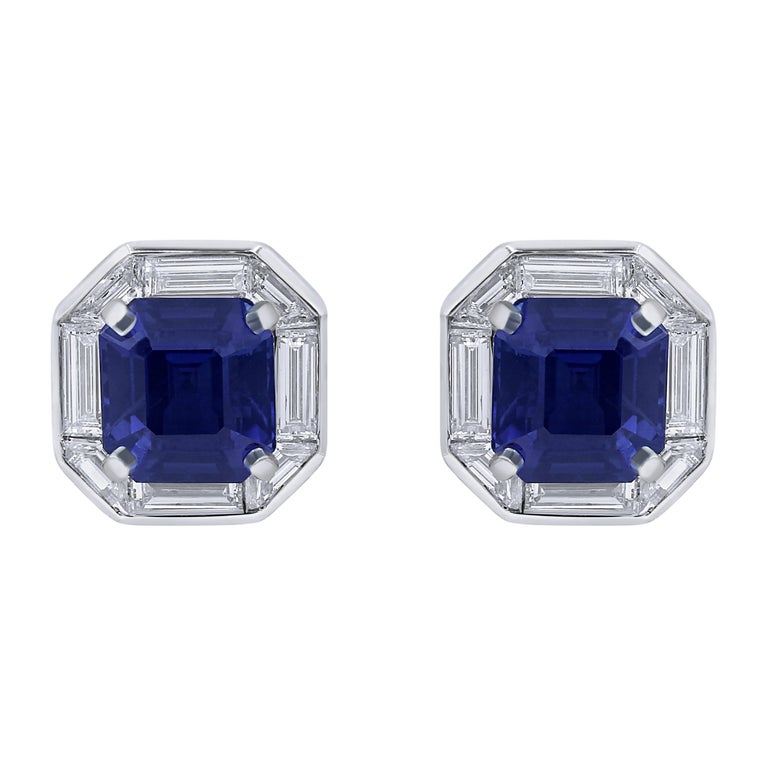 “Each of these exquisite Ceylon sapphires sits in a frame of diamonds cut specifically for it. The frame is an elegant and streamlined style that we offer with a variety of gemstones. We make frame rings as well.” 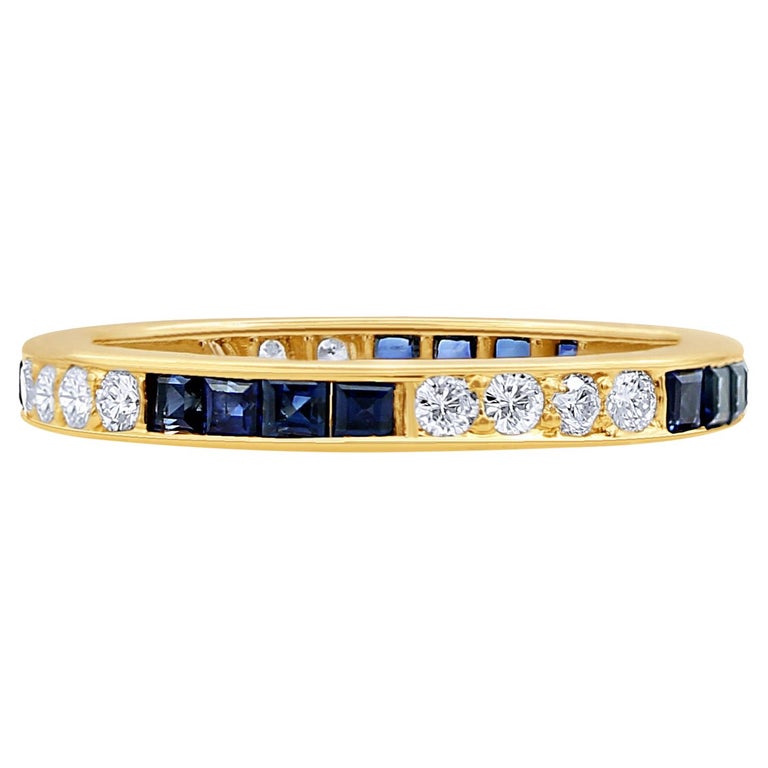 “Our band rings are made by hand in our New York City workshop using old-world techniques to ensure everlasting quality.” 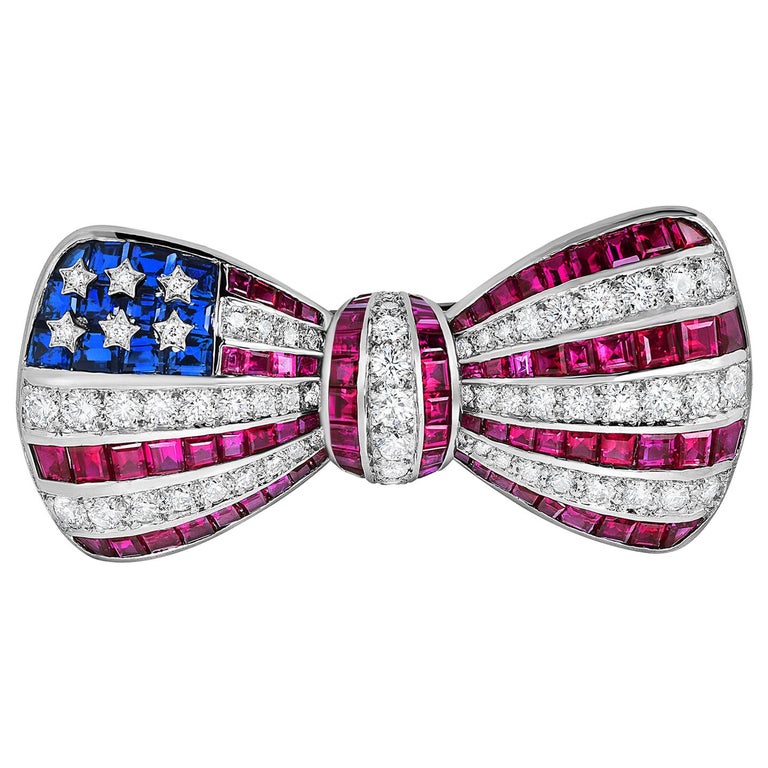 “As an American jewelry house, we have a robust collection of patriotic jewelry, and this bow-tie brooch is a playful example.” 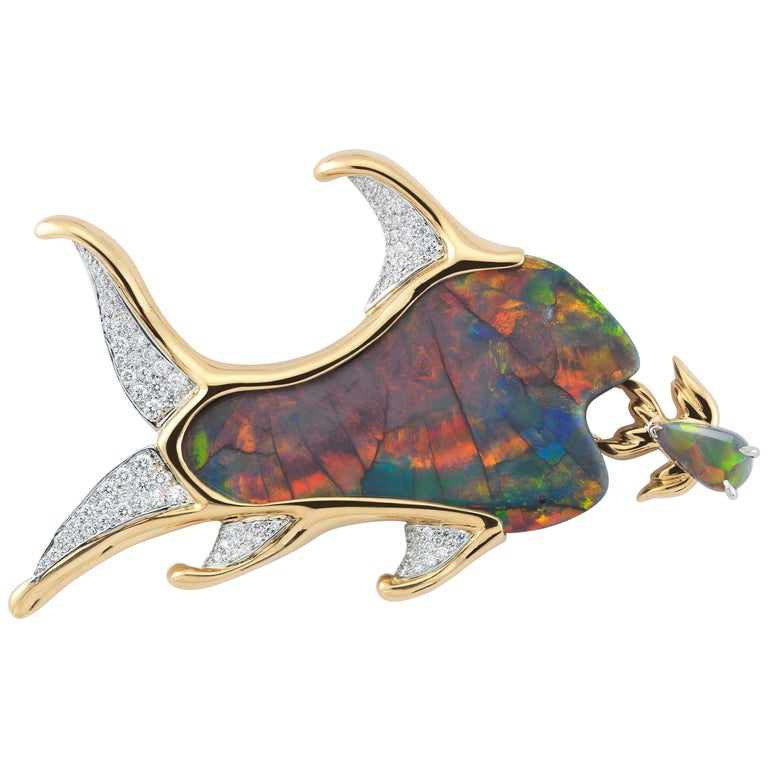 “The design for this whimsical brooch was conceived around the unique shape of this incredible Australian black opal. The engraving on the back is done entirely by hand and is artwork in itself.” 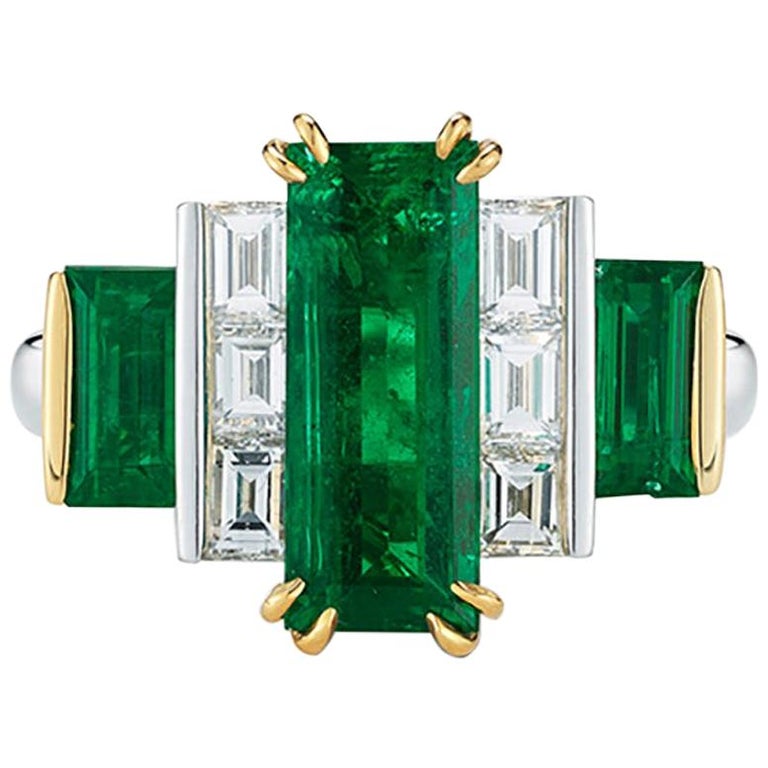 “Because of the way the emerald rough grows and the mining process, seeing long and narrow stones of this quality is rare. This Zambian stone is characteristically bright.”