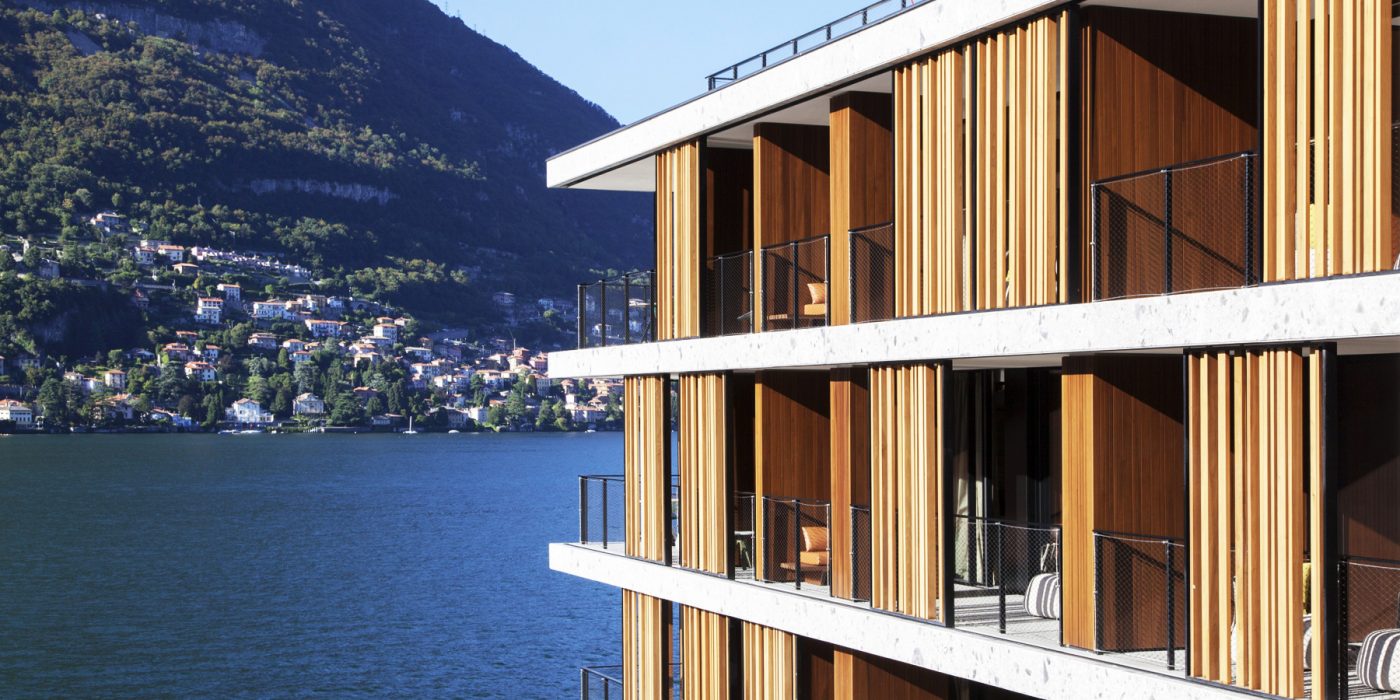 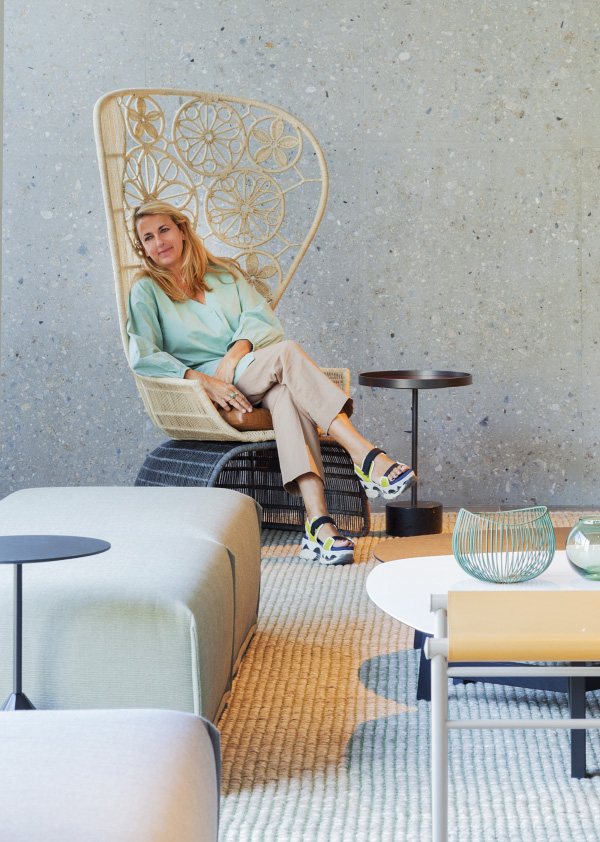 November 21, 2016Lake Como’s months-old Il Sereno — masterminded by Spanish-born, Milan-based architect Patricia Urquiola — is the only new-build contemporary-design luxury hotel on the northern Italian lake. Top: Terraces off the hotel’s 30 suites offer views across the lake to the village of Cernobbio. All photos by Patricia Parinejad

When not imagining covetable creations for contemporary furniture houses — including B&B Italia, Driade, Moroso and Cassina, where she was recently named art director — Spanish-born, Italy-based architect Patricia Urquiola makes headlines by designing some of the world’s most aesthetically ambitious hotels. She’s completed celebrated hospitality ventures in Puerto Rico (the W Vieques), Barcelona (the Mandarin Oriental) and Berlin (Design Hotels’ Das Stue). More recently she turned her attention to a project closer to her adopted hometown of Milan, in Lake Como. There, in the petite, pastel-hued village of Torno on the shores of the lake’s western leg, she envisioned both the rigorously gridded, rationalist-inspired external architecture and the texture-rich, naturally hued, minimalist interiors of the months-old Il Sereno.

This 30-suite sister hotel to the beloved Le Sereno in St. Barths is the only new-build contemporary-designed luxury hotel on the lake, and in designing it, Urquiola took inspiration both from icons of Italy’s modernist movement and from the lake and its pristine alpine surroundings.

“My idea was to create a place that was very natural but also very contemporary. There’s nothing like this on the lake,” says Urquiola, who found it “fantastic to rediscover Como through the project, to see it with a new eye. This lake is addictive.”

In addition to the guest suites — all of which have outdoor space and prime lake views, as well as a selection of Urquiola furnishings — she designed a 60-foot stone-lined infinity pool that sits slightly above the lake’s surface. She also created the sleek scheme for the northern Italian–inflected brasserie from Michelin-starred Milan chef Andrea Berton, which spills out onto a long lakefront terrace. From here, guests can enjoy broad vistas of the water and mountains, as well as views of the building’s exterior, where Urquiola combined expanses of local stone, walnut, glass and metal mesh. Complementing all this are a series of botanical installations (two walls and one sculpture) by Patrick Blanc, a French vertical-garden maestro.

“We wanted to create a real oasis of peace,” Urquiola says of her overarching concept. “People who come here, they want a place of serenity. The lake gives them this.”

Now, her hotel does, too. 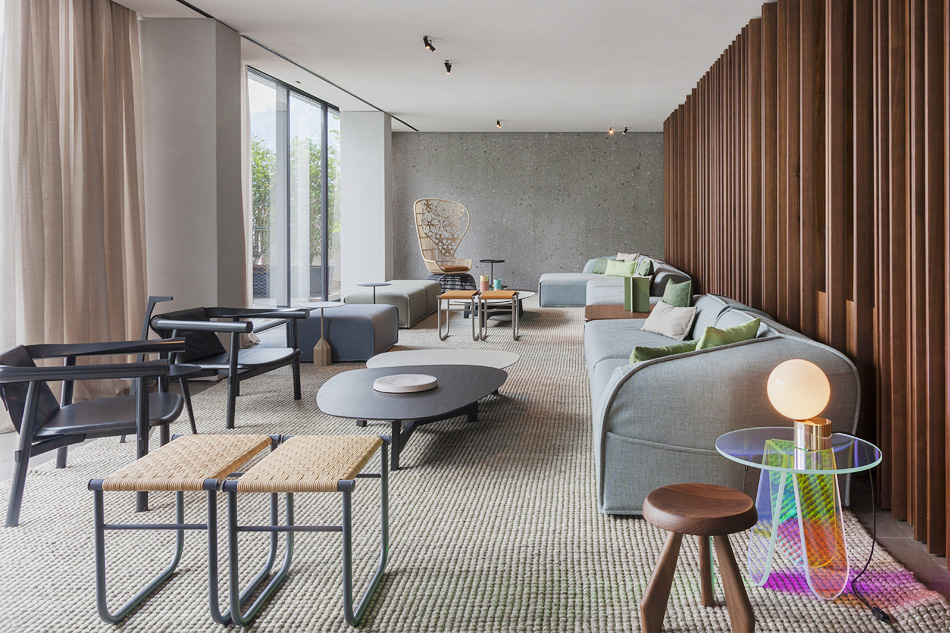 The hotel’s living-room-like lobby shows off Urquiola furnishings, as well as Charlotte Perriand cocktail tables and rainbow-colored side tables by Glas Italia. 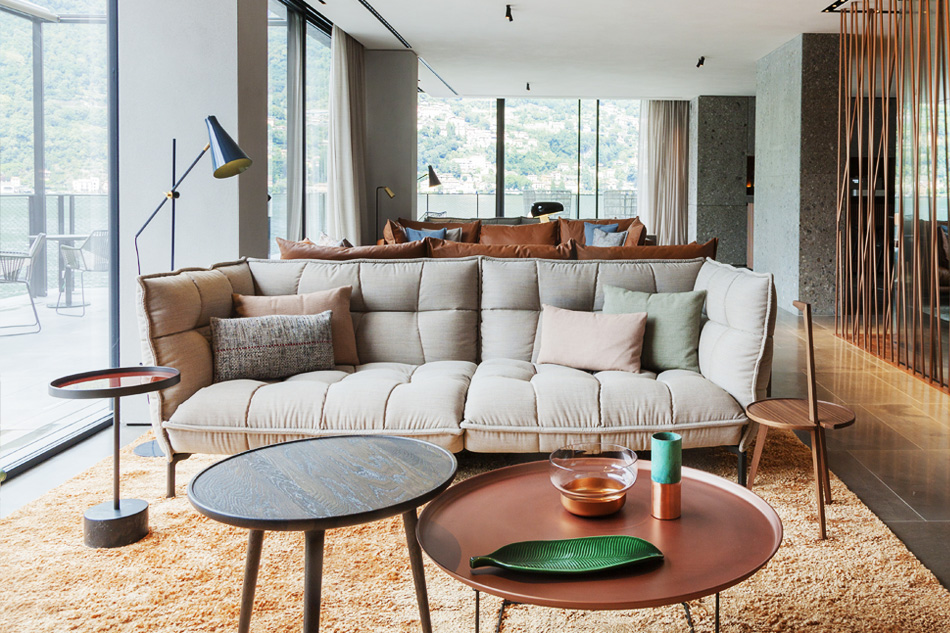 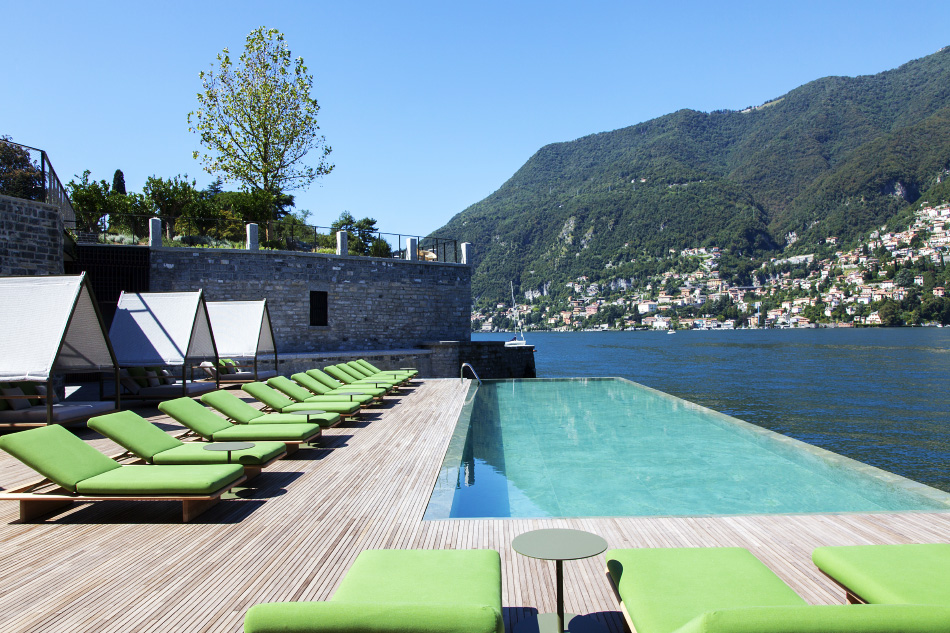 Il Sereno’s long infinity pool appears to float above the lake, bordered on only two sides by a terrace of ash wood. 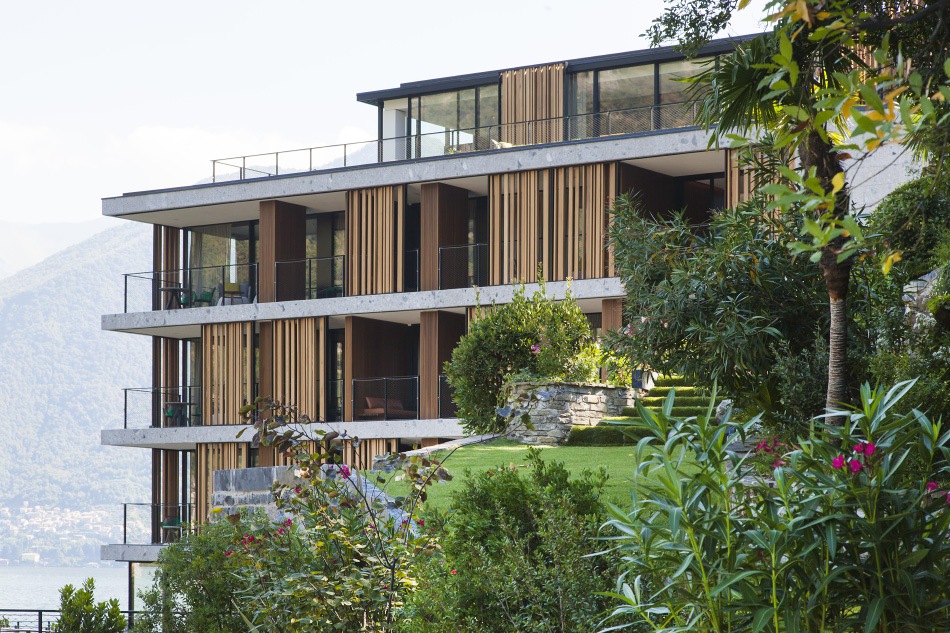 Urquiola took inspiration for the hotel’s gridded bays from a nearby icon of rationalist Italian architecture: Giuseppe Terragni’s Casa del Fascio. For the facade, Urquiola used a local Lombard stone called Ceppo Lombardo or Ceppo di Gré, which comes from a valley near the lake in the Bergamo area. Although it was used often in Milan and Lombardy in the early and middle parts of the 20th century, the stone has now become quite rare. The tulipwood brise-soleil enable guests to control the light that reaches into their suites. 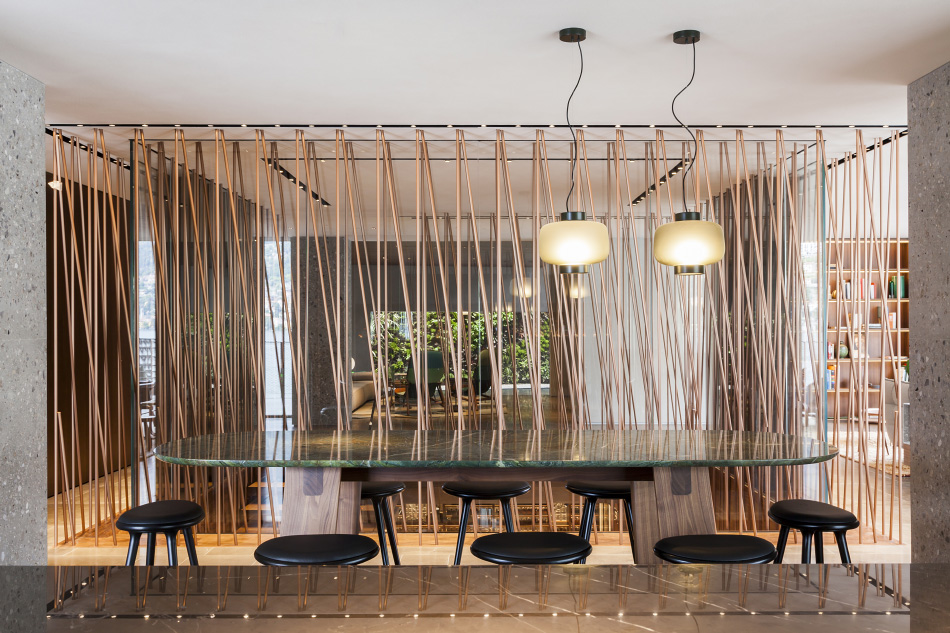 Floor-to-ceiling copper rods create an open screen that separates the bar area from the rest of the lobby. Within this zone, Urquiola set a table whose top is a polished slab of Verde Laguna marble. 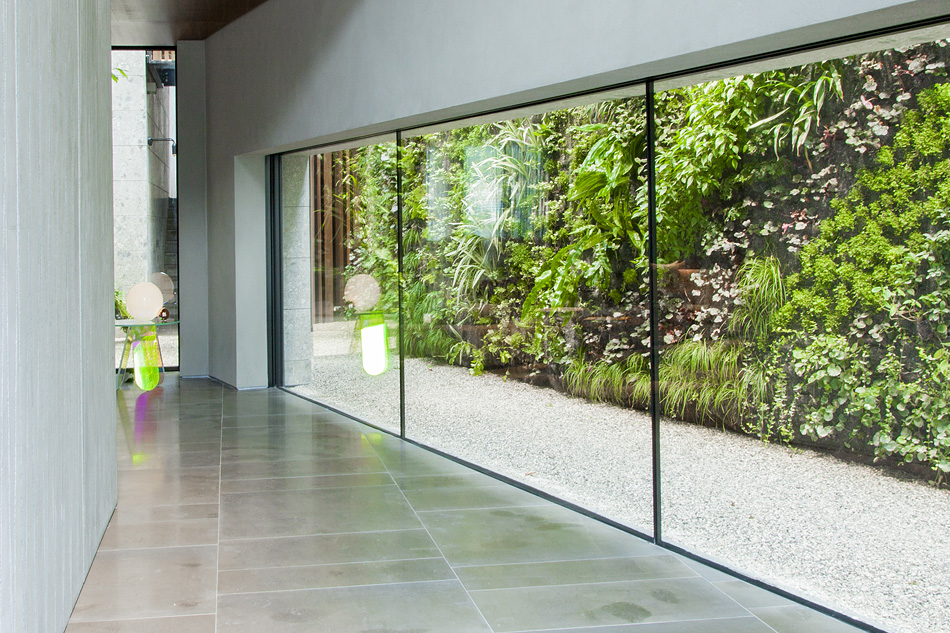 French vertical-garden master Patrick Blanc created a trio of green installations for the hotel: two walls — one of which is seen here through the long band of windows — and one sculpture. 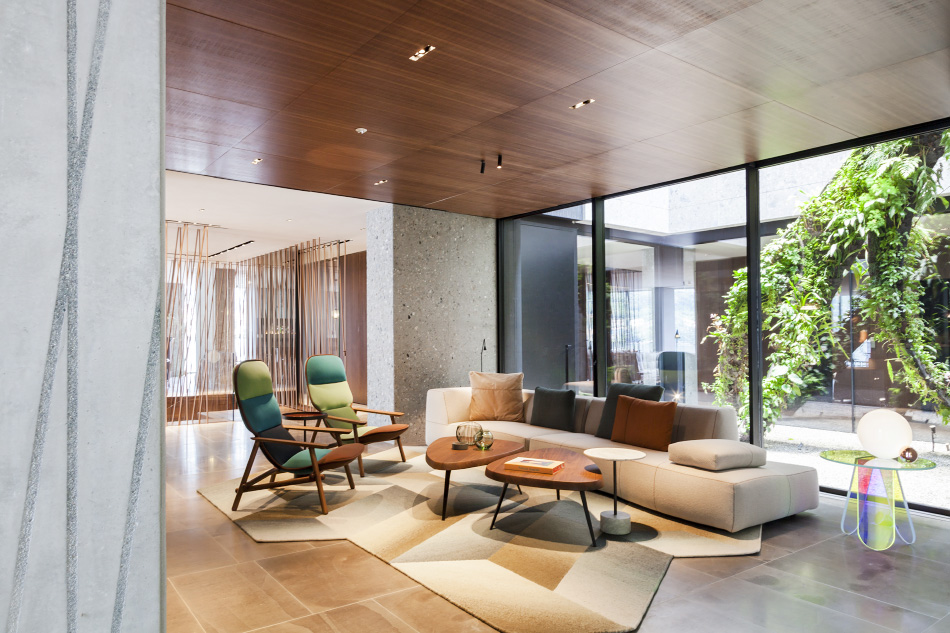 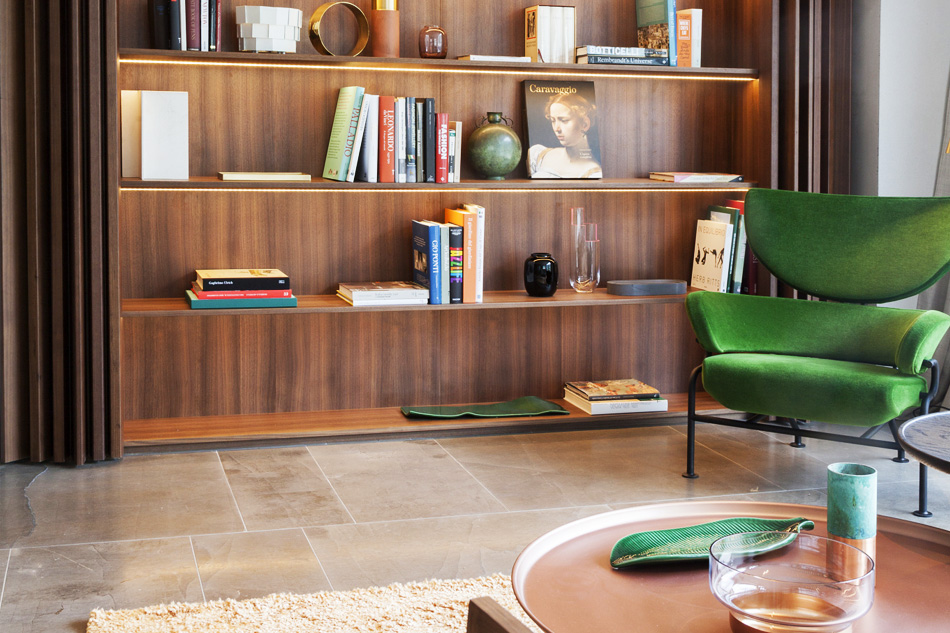 The vision was to create a contemporary hotel with understated decor, in contrast with the classical designs that can be found around Lake Como. We envisioned every facet of the hotel, from the architecture to the interior design, which included designing custom furniture, rugs, wall coverings, lamps, bathtubs and bathroom fixtures. 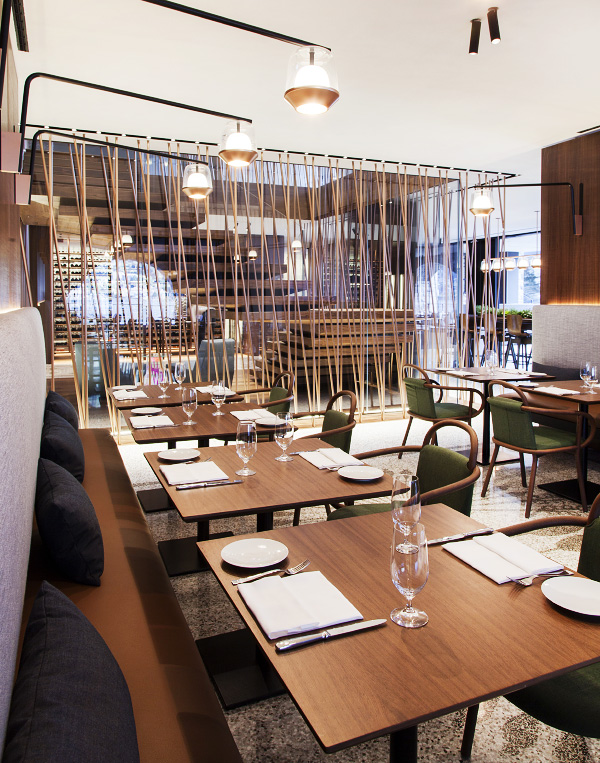 Another set of copper rods sets the terrazzo-floored dining room off from a floating staircase beyond. The restaurant is overseen by Michelin-starred Milan chef Andrea Berton.

The structure is inspired by the rationalism of the Casa del Fascio by Giuseppe Terragni [located four miles down the lake shore, in the town of Como itself], but in a more contemporary way. We took the grid-like structure of Terragni’s building, with its repeated rectilinear modules, and to it we added wooden panels at each bay, adjustable to permit light to enter the rooms or to shield them from it, according to guests’ wishes. We wanted to create a space in harmony with the natural environment.

Every room has a lake view, as do the common areas, so that the guests appreciate how the water’s colors and mood change during the day. We wanted the lake to be always present in the atmosphere, and we did a series of research projects to make the building fully respect the environment in a sustainable way.

I was inspired by the color of the lake and its glistening water, the nature of the dramatic mountains and the adjacent village of Torno. The color palette is the lake, and it includes green, light blue, copper, gray and natural tones. In terms of materials, for Il Sereno, we used natural things: stone, wood, wool and other organic fibers.

We chose these materials mainly from the surrounding region — for example, Pietra di Moltrasio and Pietra di Fossena for the pavement, Travertino for the bathroom walls, Ceppo di Gré (a.k.a. Ceppo Lombardo) for the facade and for some interiors and furniture. We used granite and walnut for the boiserie, ash for the pool deck.

I like to call Il Sereno a hotel of architecture. Here, the materials and finishes typically used for a building’s exterior — that is, for its architecture — continue into the interiors. 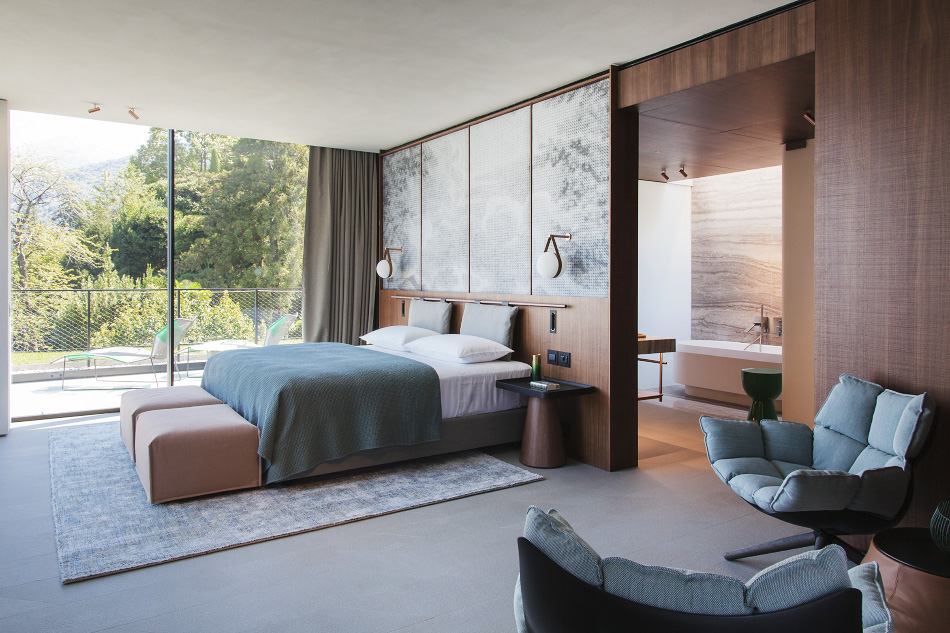 Urquiola commissioned a headboard with a water-inspired abstract pattern for Il Sereno’s penthouse suite. The chairs are once again from her Husk collection for B&B Italia. 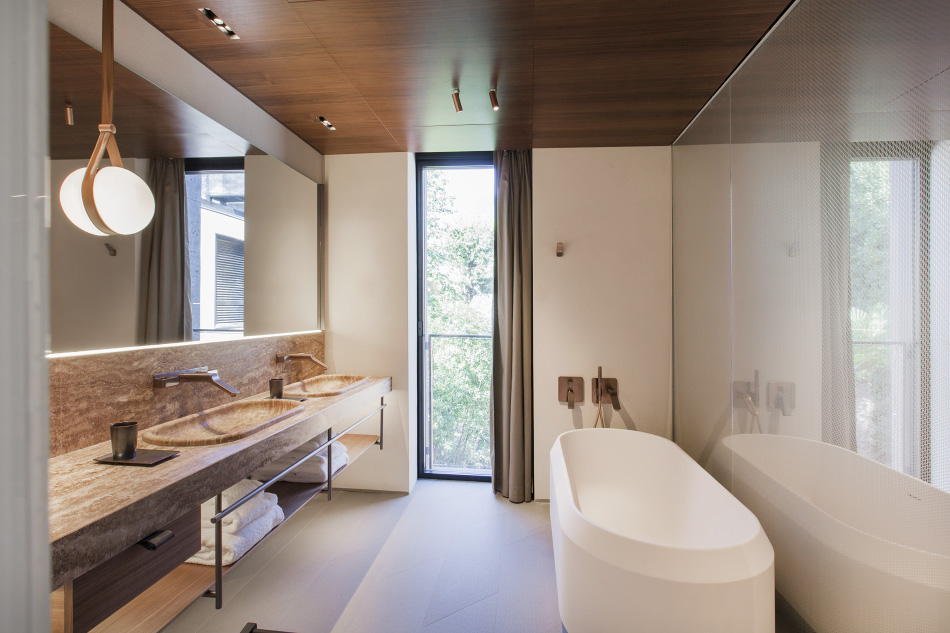 For the hotel’s bathrooms, Urquiola selected Axor Hansgrohe taps and custom designed the bathtubs, which were made by Agape and will now be available to consumers. The ceilings are walnut, and the vanity is a brown travertine called Travertino Noce (“walnut” in Italian). 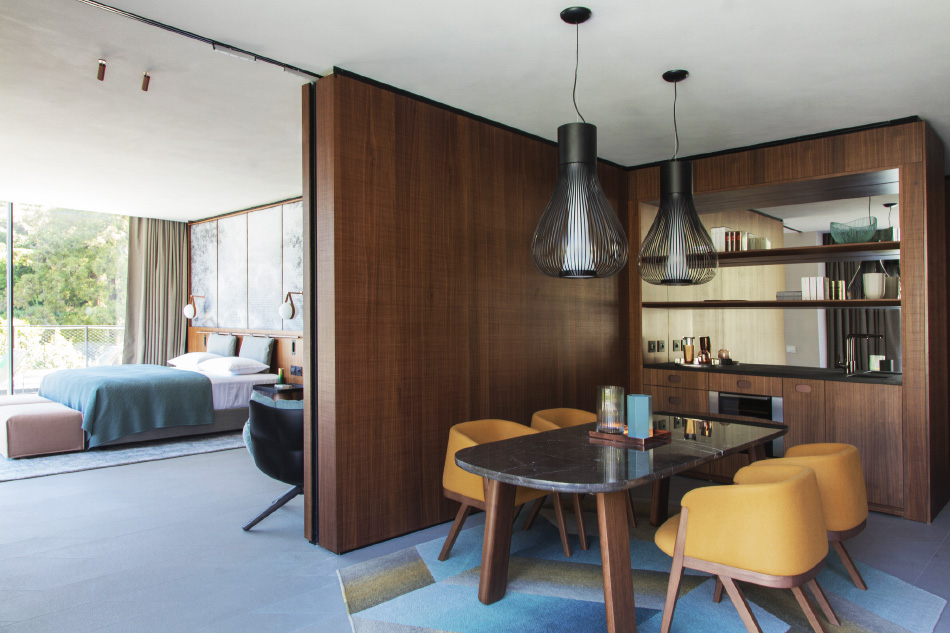 The dining and living area of the penthouse incorporates a pair of Urquiola’s Chasen pendant lamps for Flos, as well as her Logenze rug for Ruckstuhl.

Specially created for the hotel are door handles by Olivari, Axor Hansgrohe taps, lighting by Flos and bathtubs by Agape. We commissioned three custom-made Cantiere Ernesto Riva boats — two small Jettos and one Grand Vaporina del Lago — with all the interiors designed by us.

Additionally, the Lake Como area produces the world’s finest silks. To include this centuries-old tradition in the project, we designed silk scarves for the hotel uniforms.

A pair of Urquiola’s Silver Lake chairs for Moroso and another Glas Italia table sit beneath the floating walnut staircase, which is encased in copper rods and mirrored glass.

I’m very proud that Il Sereno obtained Climate House certification [an Alps-specific designation with standards similar to those of LEED] because of the environmental friendliness and eco-consciousness of its design — especially the materials we used, the energy-saving systems we installed and the lighting we selected.

There is a vast, floating staircase that connects the ground floor to a lower level. We made the steps out of walnut and surrounded these with a sort of diagrid of copper rods, which makes it look as if it is suspended. The installation is then surrounded by semi-mirrored glass that, depending on the ambient lighting, allows you to look outside at the environment or reflects the staircase back at you — but usually does both simultaneously. The idea was to make the lake and the mountains visible from the inside, enabling you to have constant contact with nature. 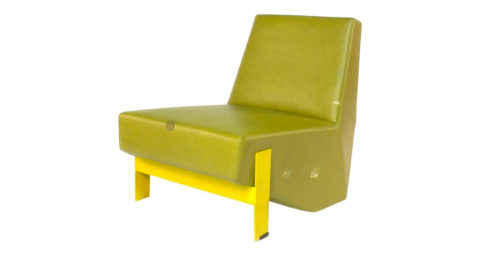 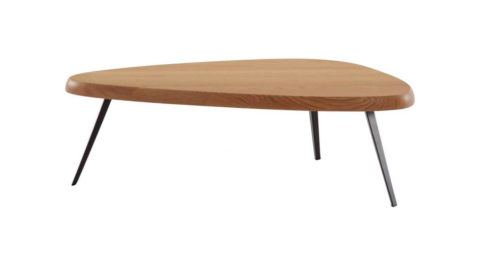 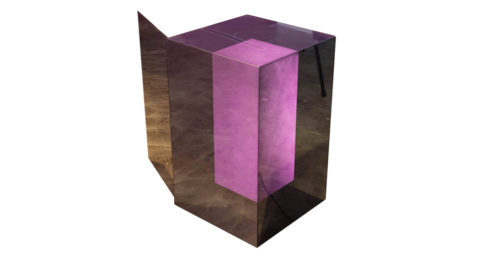 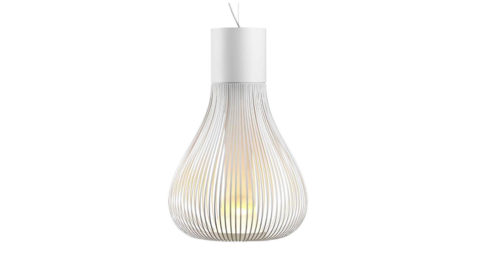 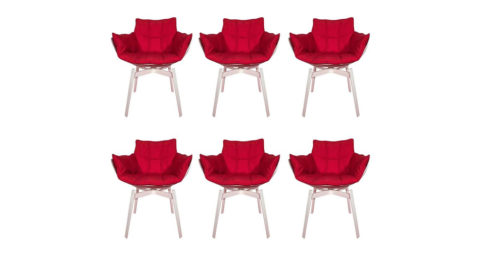 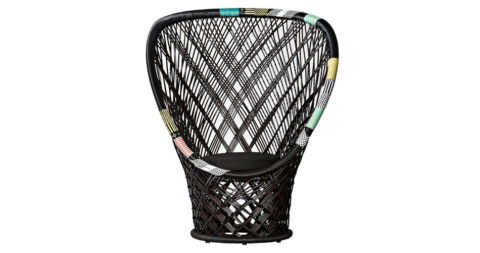