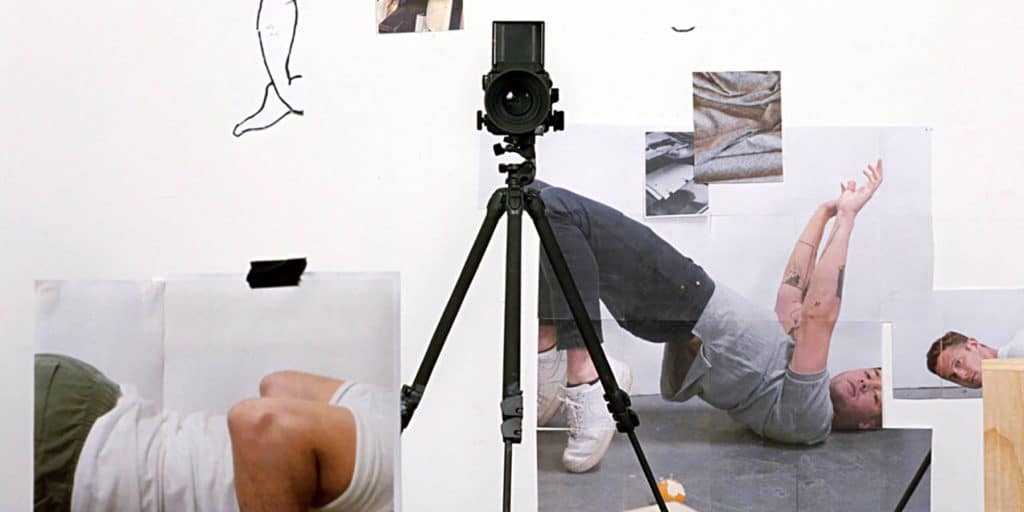 Now on view in a group show at New York's New Museum, the Los Angeles–based artist's images both seduce and implicate the viewer. 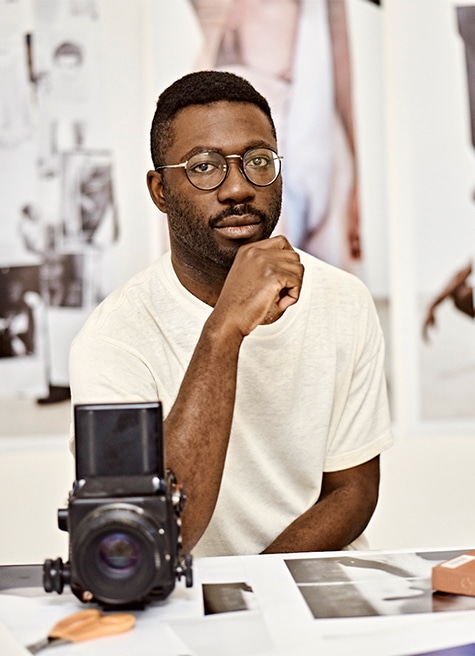 December 11, 2017Paul Mpagi Sepuya‘s photographs can be seen in the group show “Trigger: Gender as a Tool and a Weapon,” at Manhattan’s New Museum through January 21; come March, they will be on view at the Museum of Modern Art (portrait by Brian Kaminski, courtesy of OUT magazine). Top: Study with Four Figures, after R.B.N., 2014–15 (all photos courtesy of the artist and Yancey Richardson, New York, unless otherwise noted).

In Robert Mapplethorpe’s photographs, the construction of the gaze is so rigid that you’re just always kept in one spot,” says the photographer Paul Mpagi Sepuya, whose work is prominently featured in “Trigger: Gender as a Tool and a Weapon,” on view through January 21 at Manhattan’s New Museum.

Like Mapplethorpe, who courted art world acclaim and controversy with his exquisitely composed studio photographs of naked black men and sadomasochistic scenarios, Sepuya uses the camera to explore homoerotic desire. But the 35-year-old Los Angeles–based photographer has inverted the objectifying Mapplethorpe lens by shooting reflections of himself and often multiple figures partially obscured in his “Darkroom Mirror Studies.” These lush, intimate, spatially complex compositions use a smudgy mirror to integrate the camera itself into the images and destabilize the relationship between the viewer and subject.

“You are thrown into this self-contained space, both implicated by the camera looking back at you and also completely excluded. It’s an uneasy contradiction,” says Sepuya. “It’s funny — even the ones with me in them, I don’t know where I exist in relationship to the image: as a viewer or as a participant.”

One of Sepuya’s elusive signature studies — in which the reflection of the camera dominates as a confrontational eye, and various portions of his naked body are eclipsed — was selected as the primary promotional image for “Trigger,” a large group exhibition exploring gender and sexuality as fluid and moving targets. Sepuya’s profile has also risen with the recent announcement of his inclusion in “Being: New Photography 2018,” opening at the Museum of Modern Art in March. And multiple museums, including MoMA, New York’s Whitney and the Museum of Fine Arts, Houston, all bought works from his debut show at the Yancey Richardson Gallery, in Manhattan’s West Chelsea, earlier this year. 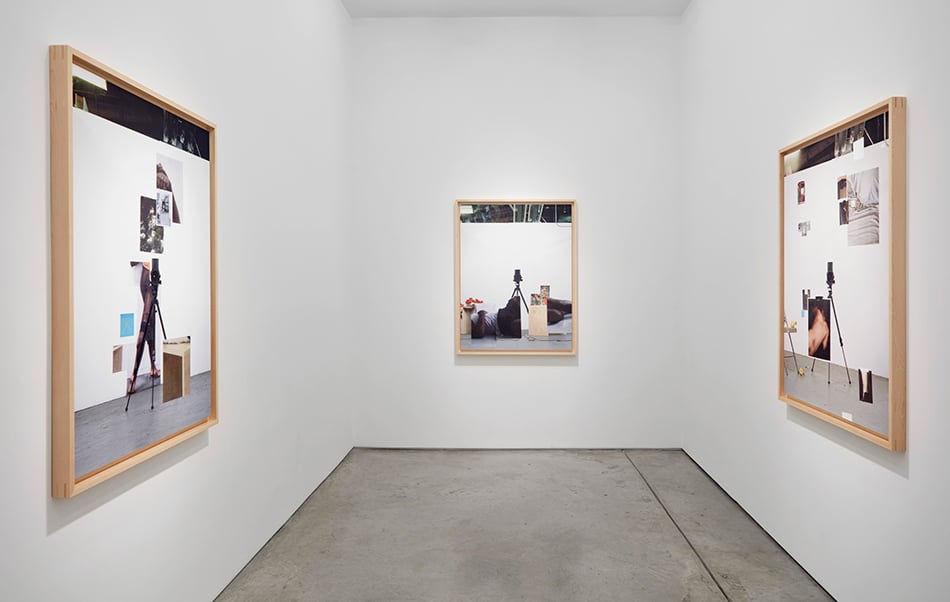 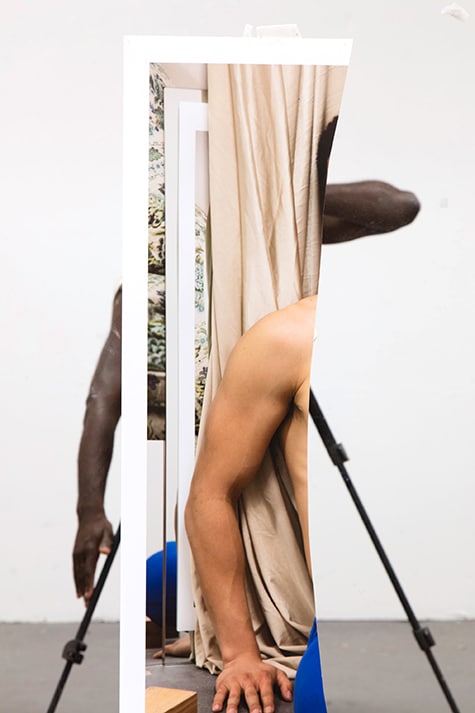 Sepuya, who grew up in San Bernardino, California, started out taking very straightforward photographs of friends and family after graduating from New York University in 2004. “The portraits helped me figure out my relationships with the subjects, a very basic photographic impulse,” he says. He got involved with the downtown queer ‘zine culture and Printed Matter, a nonprofit devoted to artist-made books, which provided ways for him to distribute and exhibit his work.

Moving frequently in New York for many years and lacking a fixed studio, he adopted the practice of making casual printouts of his images that he could bundle and carry. “It was a way of looking at the boundaries of what a studio space could be,” says Sepuya, who likes how this process, which he continues to use, undercuts the preciousness of the photograph as an object to be carefully handled. His tabletop installation at the New Museum, titled “Studio Work” (2011–ongoing), shows an array of such laser prints, postcards and artist books.

In 2014, Sepuya moved back to California to attend graduate school at UCLA, where he received his MFA in 2016. While he had often used mirrors as backdrops for his portraits, now, with the luxury of a stable studio, he began experimenting with collaging fragments of his loosely printed imagery onto the mirror’s reflective surface and shooting that. Then, he started bringing himself and other people — friends, lovers, artists, writers — into the space. Sepuya’s seductive compositions intertwine bodies present in the physical studio with cut-up reproductions of bodies. It’s hard to comprehend which limb is coming from where in these works. He plays with having the camera capture itself in the image — sometimes just as a sliver of tripod reflected in the mirror — to reinforce the fact that the photograph is a studio construction.

“It’s funny,” says photographer Paul Mpagi Sepuya, “even the ones with me in them, I don’t know where I exist in relationship to the image: as a viewer or as a participant.” 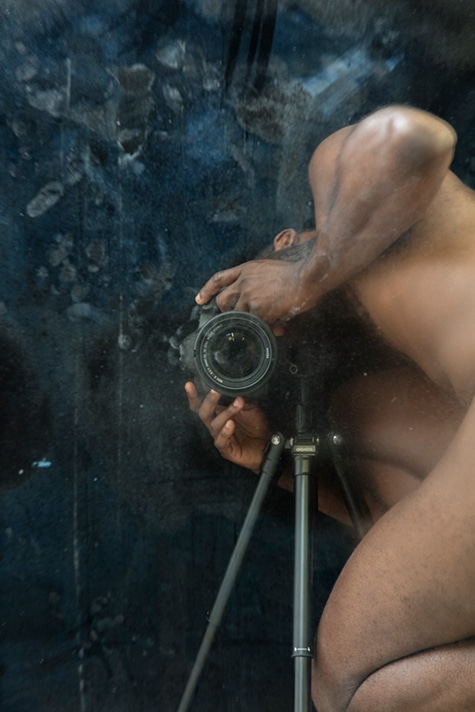 Darkroom Mirror (0X5A1531), 2017, illustrates the way Sepuya often makes the camera itself a focus of his photographs. Image courtesy of the artist; Yancey Richardson, New York; and Document, Chicago

“The mirrors are used as a way to reorganize my material and contain multiple spaces in the same image,” says Sepuya, who shoots with a digital single-lens reflex camera. Although the images can be disorienting and at times highly abstract, they are not meant to be tricky. “There’s no manipulation,” he says. “I didn’t want these to be slick and smooth, like what you would do if you collaged images on Photoshop. I wanted to keep all those traces, like when the light reflects at a strange angle and catches the dirt on the mirror.”

Sepuya became especially interested in how the mirror accumulated sweat and hand- and fingerprints during the process of working. These ghostly remnants, which he allows to build up over time, are particularly visible when viewed against his dark skin. Drawing a metaphoric connection between photographic darkrooms, where an artist develops an image in the dark, and sex-club darkrooms, where queer socializing sometimes begins, Sepuya constructed large darkroom chambers wrapped in fabric for his most recent series. “These dark brown and black velvets enclosing the space throw into relief all the history of touch on the mirrored surfaces,” says Sepuya, who uses the drapes to both reveal and conceal the communal interaction for the camera. The results are sumptuous and hazy, drawing you in while preventing you from fully grasping what you’re looking at.

Although Sepuya says he admires Mapplethorpe’s photographs for the most part, he finds the subjects ossified. “There’s no space to waver,” he notes. “With photography, on the one hand, it’s a tool about total control and manipulation, but then there’s a certain vulnerability in making it a reflexive process.”