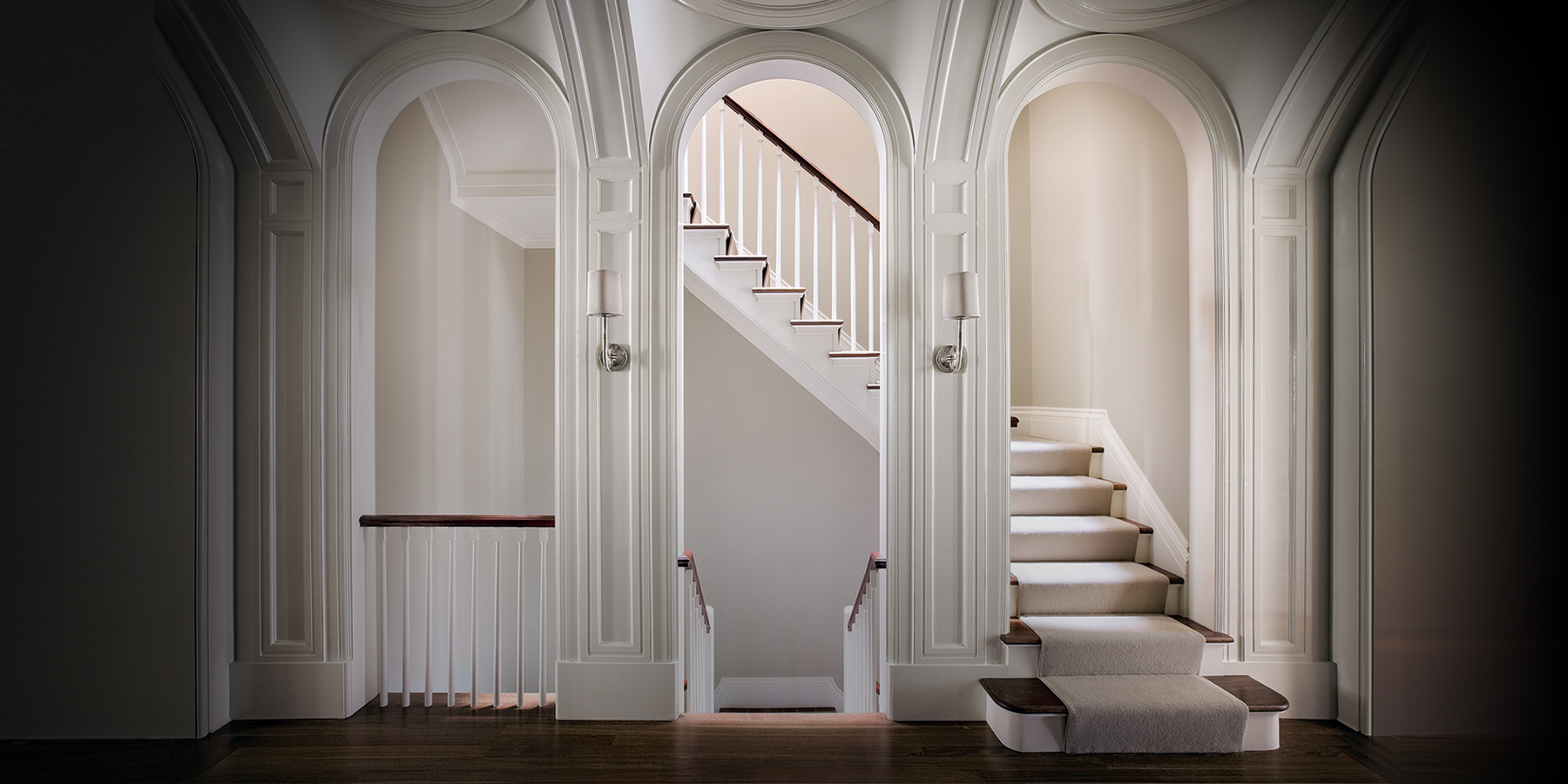 Manhattan-based architect and preservationist Peter Pennoyer has the classicism of Old New York coursing through his veins. But while he's now especially known and celebrated for his traditional designs, he also has a deft hand when a project calls for a clean, modernist approach. 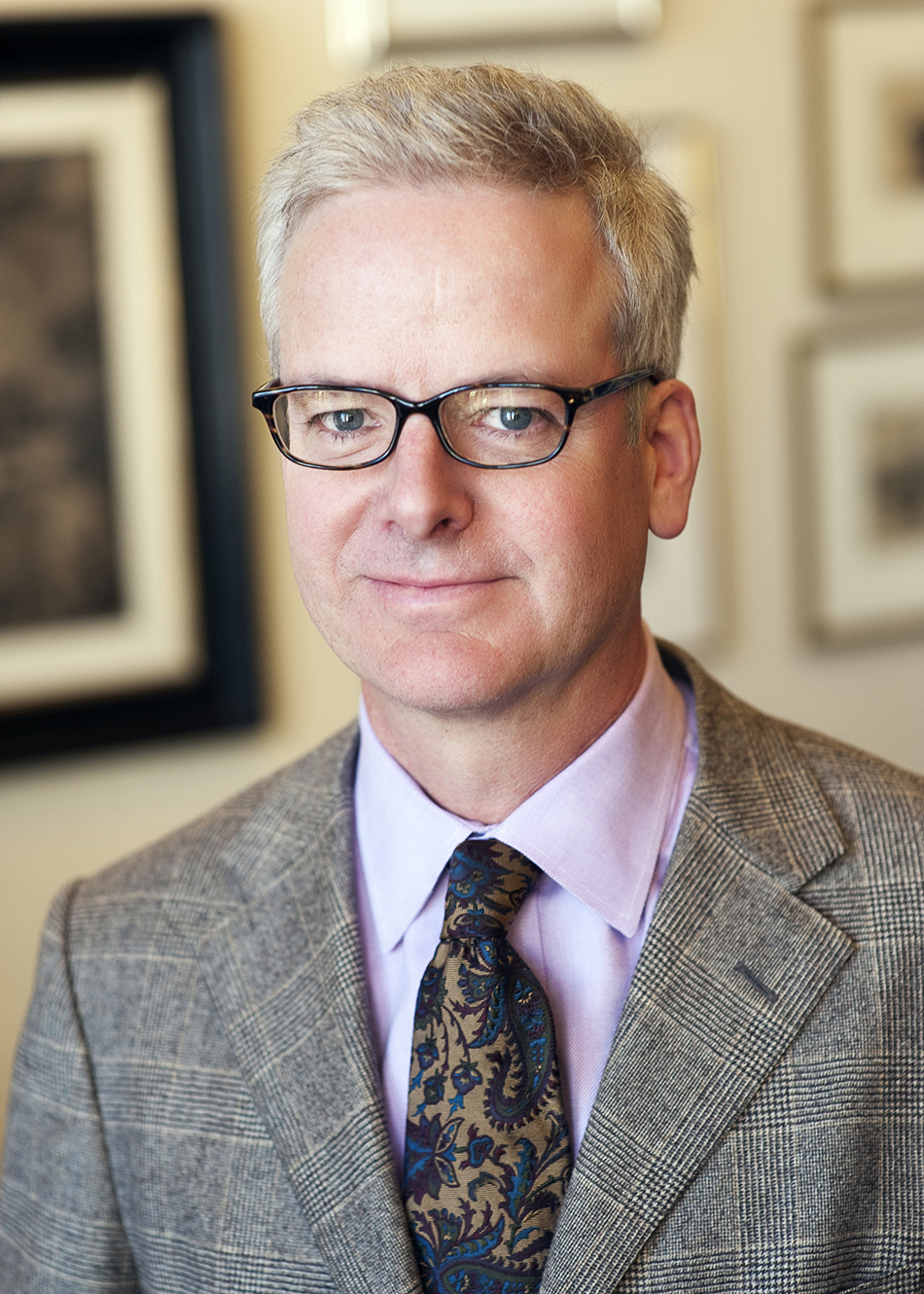 January 19, 2015Peter Pennoyer established his architectural firm, which focuses largely on residential projects, in 1990 (photo by Jay Ackerman). Top: In a brownstone in New York’s Carnegie Hill that his firm renovated, Pennoyer moved the staircase and added a sequence of arches to articulate the space. Photo by Scott Frances

There is probably no architect who is better qualified to take an old-school approach to designing buildings than Peter Pennoyer, a great-great grandson of J.P. Morgan and a thoroughgoing product of the Manhattan elite, including a double dose of Ivy League education at Columbia University (both the college and the architecture school).

And yet Pennoyer, 57, wears his devotion to classical architecture surprisingly lightly for someone who is known for a mastery of traditional styles and motifs. You could say he knows the traditions so well that they are fully digested, and don’t weigh him down in the slightest.

He can design an original Corinthian capital like nobody’s business (as he has done for a limestone mansion on Manhattan’s Upper East Side), but he also employs a clean, modernist approach with surprising frequency, reflecting the age in which he works. His resume includes projects for New York City’s Colony and Knickerbocker clubs and the repurposing of a historic gym as a multiuse research facility for the Connecticut prep school Hotchkiss — more venerable institutions would be hard to find. He’s also taken on such projects as the interior of Keith Haring’s Pop Shop in Soho.

In person, Pennoyer is unflappably upbeat and charming, like a favorite college professor. And indeed he is a scholar who teaches at N.Y.U.; with his writing partner, Anne Walker, he has authored several books on key architects of the past, including Grosvenor Atterbury, Delano & Aldrich and, most recently, Cross & Cross. 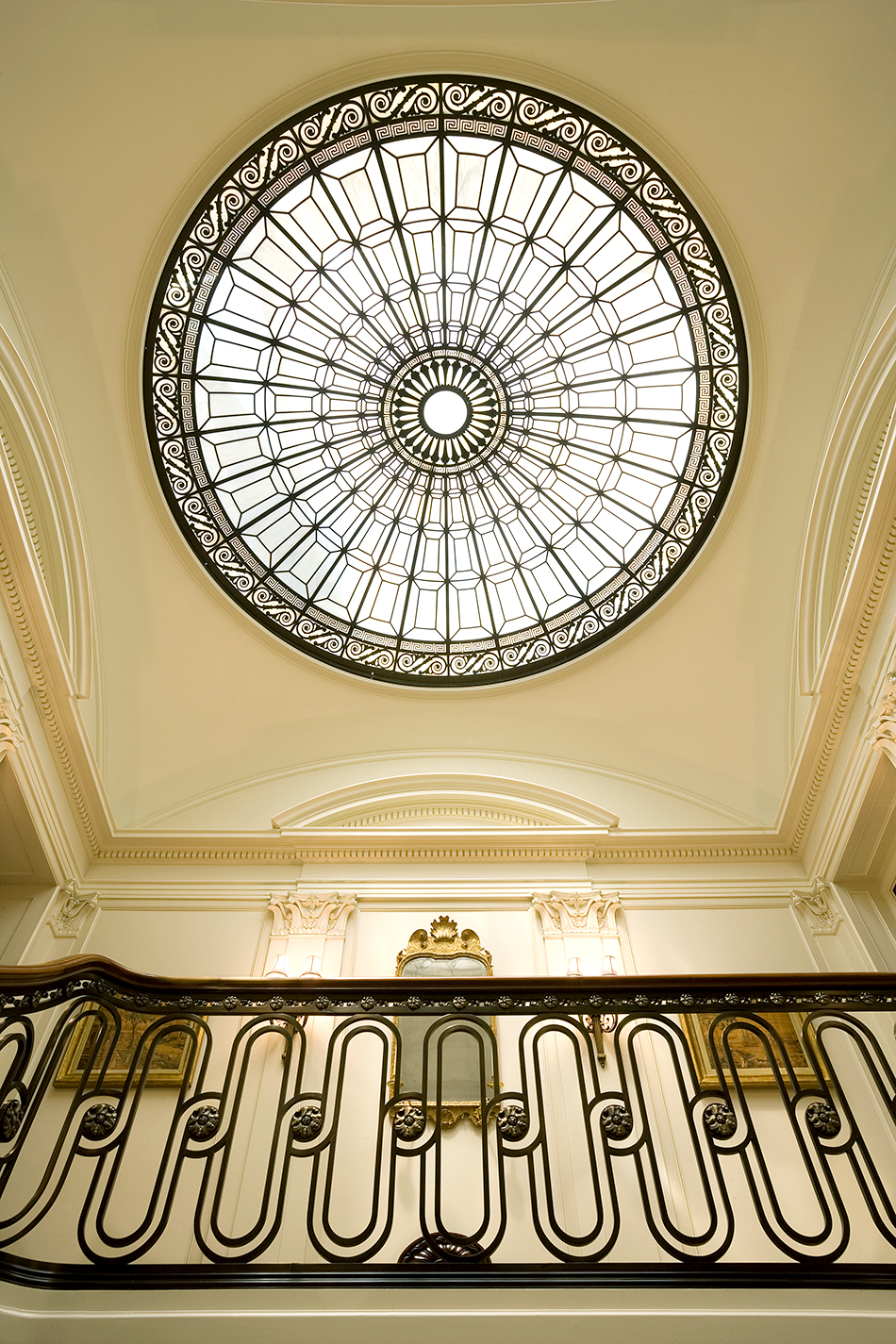 On Manhattan’s Upper East Side, an iron-framed skylight illuminates the stair hall of a limestone mansion whose  18,000-square-foot interior Pennoyer’s firm completely rebuilt in 2004. Photo by Jonathan Wallen

Pennoyer, an active preservationist, is about as steeped in New York City’s storied design history as you can be. “I was always interested in architecture, particularly in the old buildings, because I grew up here,” he says. When he was a Columbia undergrad, he adds, “the architects were all doing modern stuff, but the preservation people were invested in old cities and buildings, so I took classes with both.”

He started interning for the noted architect Robert A.M. Stern while in college — the current dean of Yale’s architecture school, Stern was a longtime Columbia faculty member — which turned into a part-time job during graduate school. Stern, for his part, noted in his introduction to the 2010 Vendome Press monograph Peter Pennoyer Architects his former pupil’s “capacity to bring back to life forlorn relics” and his exemplary role as an “architect as public intellectual.”

Pennoyer left Stern’s office in 1983 to do the kind of projects that were then available to a young architect in Manhattan. “A classmate, Peter Moore, said he had gotten this job, and he needed a partner,” recalls Pennoyer. “It was for Isabella Rossellini’s duplex loft in the American Thread Building [a Tribeca landmark]. Of course I said yes. We rented desks at a firm in Midtown. We did these minor interior renovations and decorating — I called them miracle makeovers.”

A few years later he formed a new practice, with James Turino. As the decade progressed,  the projects got more complicated and started to fall into what would become his wheelhouse. Notably for someone his age, barely 30 at the time, he got to tackle the overhaul of a 1927 Art Deco gem, the Mark Hotel (which was in turn recently redone by Jacques Grange). “We moved our firm into the hotel and worked our way through the building from the columns to the roof for four years, floor by floor,” he says of creating the clubby look, which featured plush tufted upholstery and lots of dark wood furniture.

In 1989, a friend from architecture school, Blake Auchincloss, asked Pennoyer to build a house for his father, the noted novelist, white-shoe attorney and upper-crust chronicler Louis Auchincloss. “It was a Swedish farmhouse with classical aspirations,” says Pennoyer of the Catskills retreat. “Sweden is a great place to learn classicism: It’s all simplified, abstracted and done with great economy. At the center of the house, we created a two-story library in which he could work and be surrounded by books, with a library balcony above.”

In 1990, Pennoyer started his current firm, and these days he and his 52 colleagues — notably his director of design, Gregory Gilmartin, whom he credits with unerring knowledge of classical forms — spend about 80 percent of their time on residential architecture, from townhouses and apartments to country estates. Sometimes Pennoyer collaborates with his wife, the interior designer Katie Ridder. (The couple are honorary co-chairs of the Opening Night Party at the Winter Antiques Show this Thursday, January 22; click here to purchase tickets.) A large portion of his projects are in New York and New England, although he branches out as far as London, Costa Rica and China. 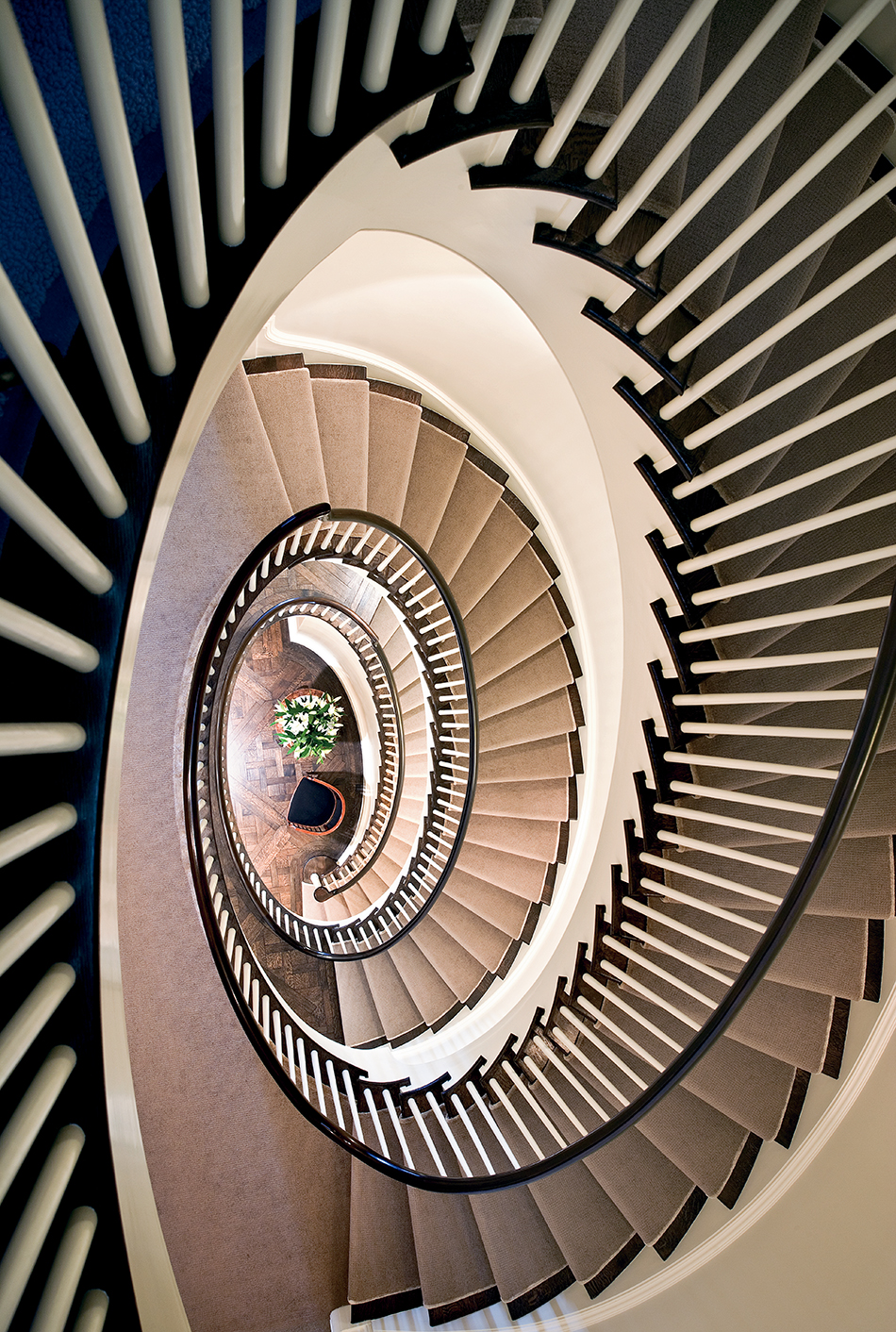 Pennoyer was faced with the challenge of turning this emphatically vertical New York City townhouse — seven-stories tall and only 19-feet wide — into a wholly integrated and livable family home. His solution: adding a dramatic oval staircase that ascends a full five stories. Photo by Scott Frances

“The heart of the firm has always been classical and traditional architecture,” he says. “You can bring classical principles and design to any design problem.”

He’s not always predictable in the way he deploys those principles, however. For a Park Avenue duplex in one of the oldest and stodgiest buildings on that storied stretch, Pennoyer did a gut renovation that pared things down to very simple geometric moldings and lots of white. “It was a rabbit warren, and everything felt heavy,” he says. “So we created an open flow between the other rooms and the kitchen. The character of the apartment was transformed.”

In terms of bold gestures, Pennoyer chose the single most complicated thing to tackle — removing the old colonial-style staircase and added a beautifully curving one that floats just off the wall, so much so that you have to look closely to see the gap. “I always say, ‘Do less and do it better,’ ” he avers.

For Phaidon Press publisher Keith Fox, Pennoyer started nearly from scratch behind an 1857 Italianate townhouse façade in Greenwich Village. “Great classical architecture is about flow and dimension, and the tricks to create that,” says Fox of the complete overhaul. “Townhouses are rectangles on top of each other — not good flow. But Peter opened up all the rooms and added a circular stairway, turning that into a room of its own. It’s surprisingly clean and modern, but an homage to the original home, too.”

The cover of Peter Pennoyer Architects features Drumlin Hall, a Hudson Valley country house from 2009 that Pennoyer patterned after a Palladian villa, with nods to the great architect Robert Adam. Neoclassical touches are everywhere on the perfectly symmetrical sandstone beauty — pediments, bas-relief cornucopias and a porte cochere and portico that mirror each other on opposite sides of the house.

The finely conceived rosettes in the moldings that surround the house’s dramatically vaulting galleries demonstrate how Pennoyer avoids pastiche when he works with traditional elements. “At the beginning, when you come out of school, you are copying, because you don’t know things well enough to draw them from your memory,” he says. “But later you understand it in a deeply felt way, so you’re not just collecting motifs.” 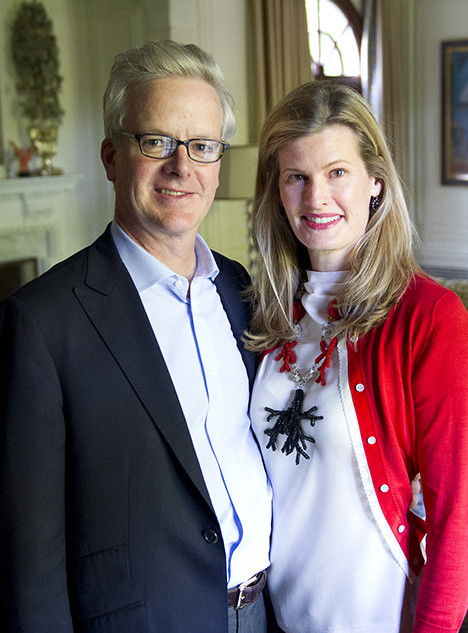 The biggest project on Pennoyer’s plate recently has been the soup-to-nuts design for a brand new 17-story condo building on the Upper East Side, 151 East 78th Street — the first such project he has done. “We brought back a lot of features that hadn’t been used in New York apartment house design in decades, like wooden windows with panes,” he says of the edifice, which was loosely inspired by Rosario Candela’s grand limestone buildings of the 1920s. “The windows make the rooms so much more pleasant.”

The lead developer for that project, Joshua Crane, wasn’t altogether convinced at first. “He had to convince us of certain things, but he was right,” says Crane, who also admired the fact that Pennoyer’s team found a Japanese firm to make chic hardware for the building’s Smallbone kitchens. “It’s super traditional, but with a modern wink,” he says.

In a tip of the hat to Candela, the building’s base is Indiana limestone, and the upper floors, encased in shaved brick, are set back from the street. “The major tweak is that in a nineteen-twenties building, the kitchen and staff quarters are tucked behind the elevator and hidden away,” Pennoyer says. “We did the opposite: We open the kitchen right on to the dining room through big doors.”

Pennoyer’s upcoming projects also include a community of villas in Dalian, China, and a leafy estate in Peapack, New Jersey, that he says combines a “serious” sandstone house with “relaxed” board-and-batten outbuildings. “I always prefer to build when there’s been a structure on the land before, because the sites make sense,” he says of the latter project, a once and future farm.

The blending of old and new has actually caused Pennoyer’s prospective clients to scratch their heads at times. “People look at my portfolio and get confused as to what’s old and what’s new,” he says. “It’s been a challenge in developing the practice.”

But Pennoyer relishes that happy confusion since it shows the depth and quality of the work — timelessness is all. “We’re proponents of architectural fiction,” he adds. “If you can write it well enough, you can get away with it.”