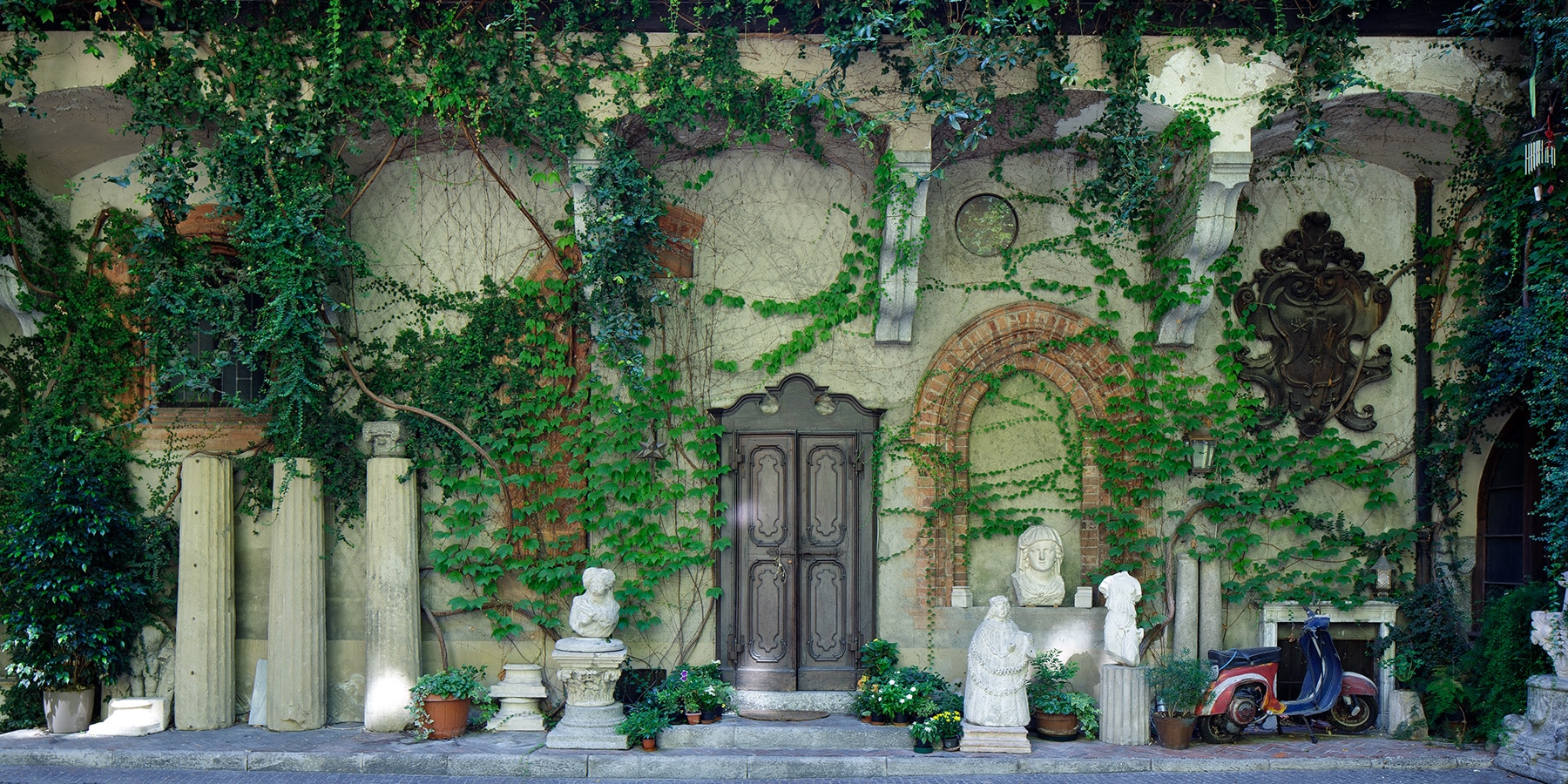 Following the recent reissue of some of his most prized furniture designs — now available on 1stdibs — Introspective gets an exclusive glimpse into the Milan palazzo where the famed Italian architect once lived. 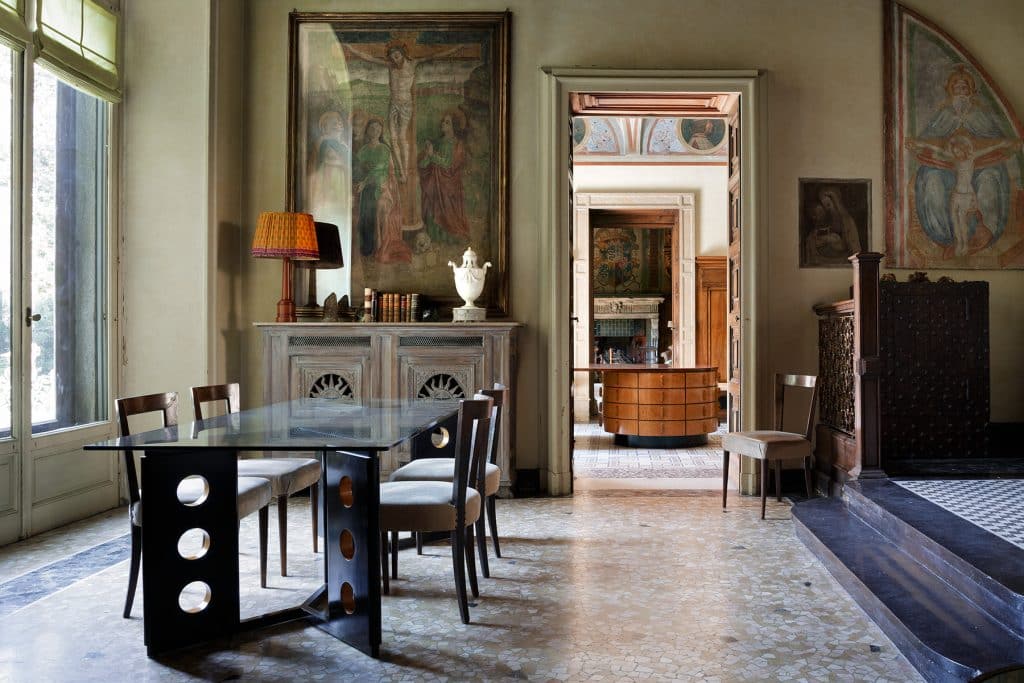 A rare look inside Milan’s centuries-old Casa degli Atellani — redesigned by Piero Portaluppi from 1919 to 1921 and again after World War II — provides an in situ view of new reissues of the architect’s ingenious furnishings, now available on 1stdibs through Portaluppi Milano Design. These include a modernist dining table and oak chairs based on models from 1934 and 1949, respectively. Both are seen here, in the palazzo’s stair hall. Top: Statues collected by Portaluppi fill one of the property’s two courtyards. The architect lived in an apartment in the palazzo from 1923 until his death, in 1967; nearby on the property are vineyards planted by Leonardo da Vinci.

Piero Portaluppi may be best known today for Milan’s Villa Necchi Campiglio, the early 1930s mansion whose rationalist exterior and Art Deco interiors all but stole the show from Tilda Swinton in director Luca Guadagnino’s visually sumptuous 2010 film I Am Love. But the polymath mid-20th-century Italian architect, furniture designer, amateur filmmaker and occasional satirical cartoonist created another Milanese home with an equally impressive pedigree — and a story that remains virtually unknown by the general public.

Portaluppi worked on Casa degli Atellani from 1919 to 1921, combining, restoring and then ingeniously renovating, expanding and redesigning two neoclassical palazzos that date back to at least the 15th century. Once the project was completed, he moved into one of its apartments and lived there until his death, in 1967.

The renovations had been commissioned by hydroelectric-power tycoon Ettore Conti, who had recently purchased the property (and whose niece Portaluppi married in 1923). But centuries earlier, the buildings had belonged to Ludovico Sforza, the duke of Milan and a patron of Leonardo da Vinci. Sforza, in fact, likely hosted Leonardo at this very home from 1495 to 1498, while the artist was painting The Last Supper for the church Santa Maria delle Grazie, which sits just across the street. During that time, the duke gave Leonardo a hectare of land adjacent to the property, where he planted his very own vineyard. The vines continue to produce grapes at one end of the palazzo’s gardens to this day, leading to Casa degli Atellani’s being known to some as La Vigna di Leonardo (Leonardo’s Vineyard).

In the course of his renovation, Portaluppi uncovered centuries-old frescoes and painstakingly preserved them. He also maintained the neoclassical facade. The choices he made for the interior architecture and its furnishings, however, were decidedly modern. He dramatically overhauled the layout, creating a plan with a more open flow, and in subsequent years, he designed a number of furniture pieces for it, including the curvilinear Omnibus desk and a scalloped-back modernist sofa, both from about 1940.

Now, Portaluppi Milano Design has brought out a special collection consisting of reissues of these designs — as well as of ones the architect created for other houses  — several of which are available on its 1stdibs storefront.

On the eve of the collection’s launch, the designer’s grandson Piero Castellini, an interior architect and vice chairman of the Fondazione Piero Portaluppi Baldissera, who now lives in his grandfather’s apartment, opened the doors to the Casa degli Atellani for our photographer — and entertained a few questions from Introspective, as well. 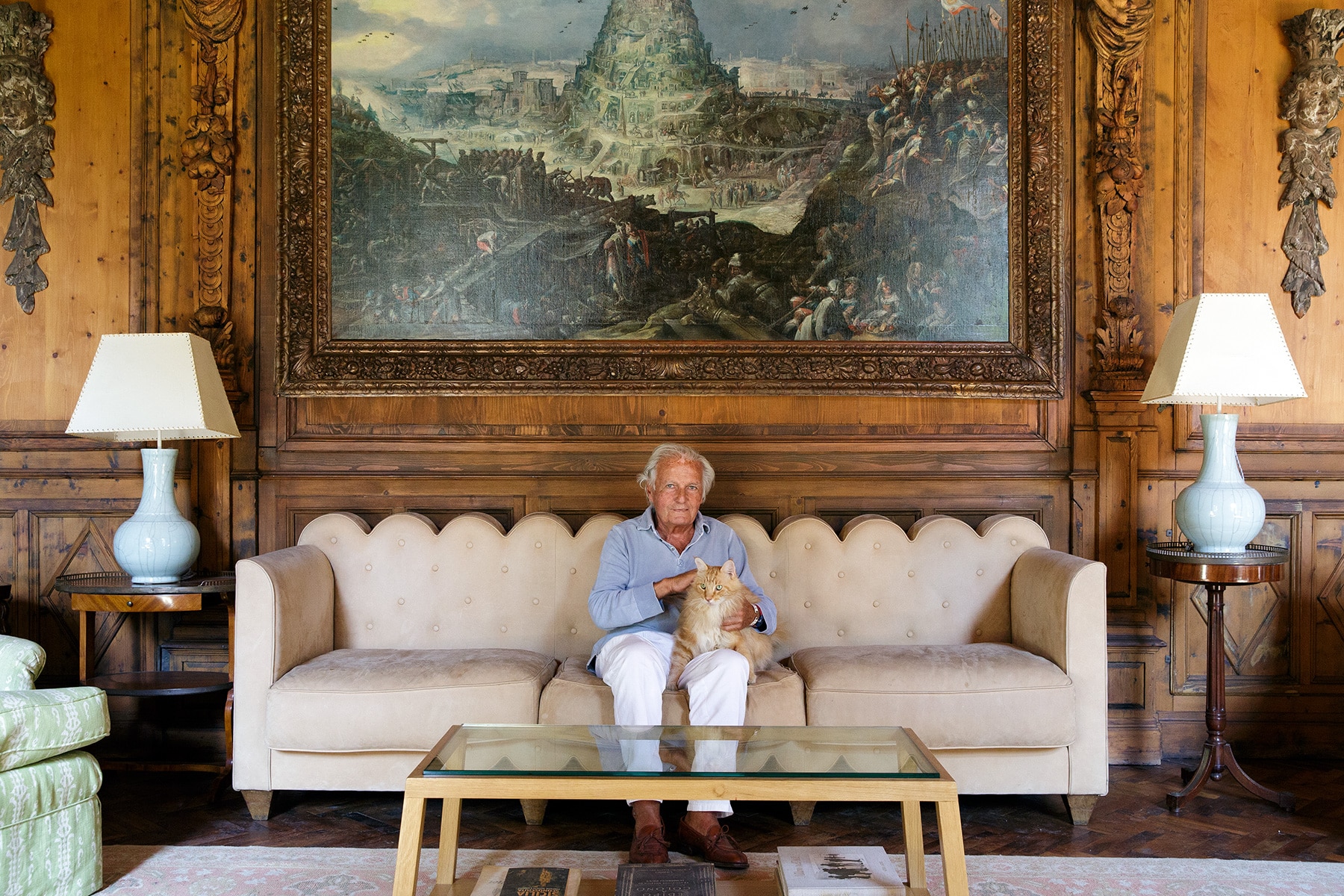 Portaluppi’s grandson Piero Castellini Baldissera — an interior architect and vice chairman of the Fondazione Piero Portaluppi — sits on a reissue of his grandfather’s scalloped-back modernist sofa under a painting of the Tower of Babel by Marten van Valckenborch. Castellini today lives in the Casa degli Atellani apartment once occupied by his grandfather. 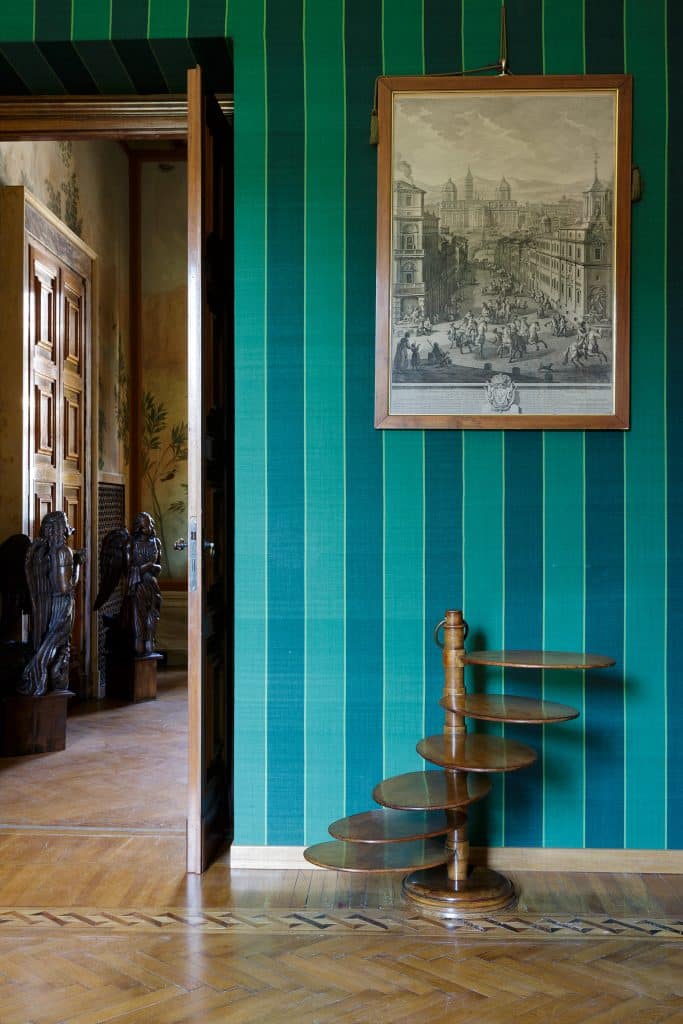 A 19th-century print depicting Palermo, Sicily, hangs over a reissue of a tray holder that Portaluppi originally designed with nine spiraling modular elements. He created this six-piece version for his own home in 1932. Because of its shape, the piece is known as i petali (“the petals”).

1. How would you describe your grandfather’s legacy?

Portaluppi was the architect of middle-class Milan and was also the first architect to be allowed in the Rotary Club, the hub of that middle class. In Milan, he is everywhere. I am still in awe of all that he has done in this city.

2. Why reissue his furniture now?

I’d say that it’s because Portaluppi always planned pieces of furniture that were unique, made especially for his clients and not for industrial production. Portaluppi’s designer side is not well-known at all. This way, it will be.

3. Do you think he was misunderstood toward the end of his life?

Misunderstood, no. Abandoned, maybe. Forgotten, that is for sure. Portaluppi’s world coincided exactly with Italy’s Fascist period. He wasn’t more of a Fascist than the rest of the Italian population or more than other important architects of the time, but certainly this coincidence did not do him good. Ironically, today, Fascist design is a trend! 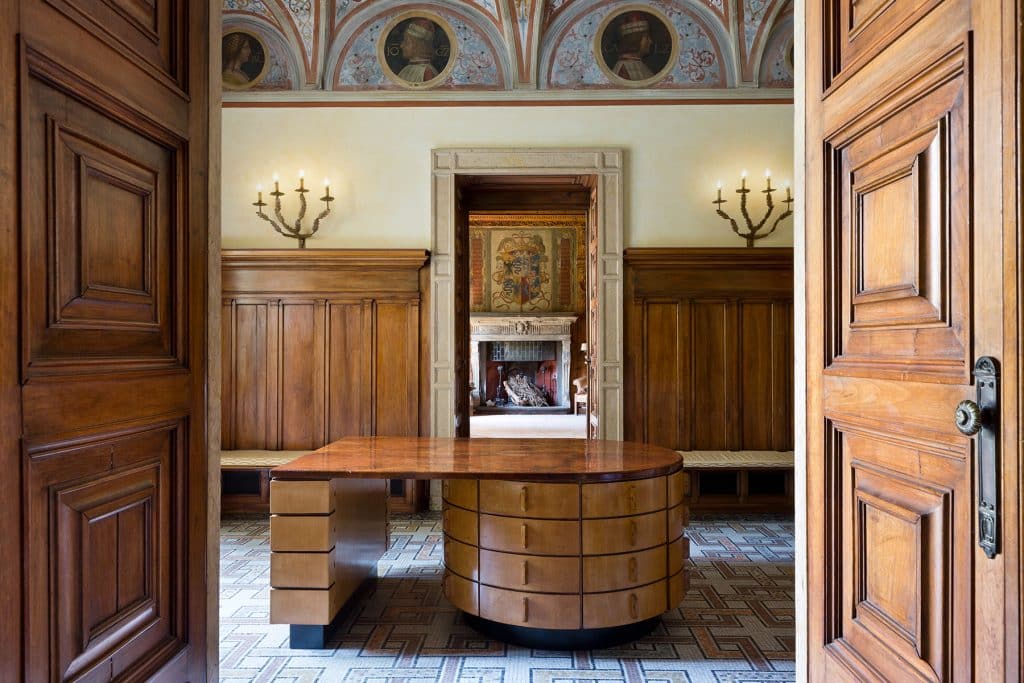 The Omnibus desk, ca. 1940, sits in the house’s portrait hall. The room features a frieze depicting members of the Sforza family — Renaissance-era owners of the palazzo — and mosaic floors designed by the architect. 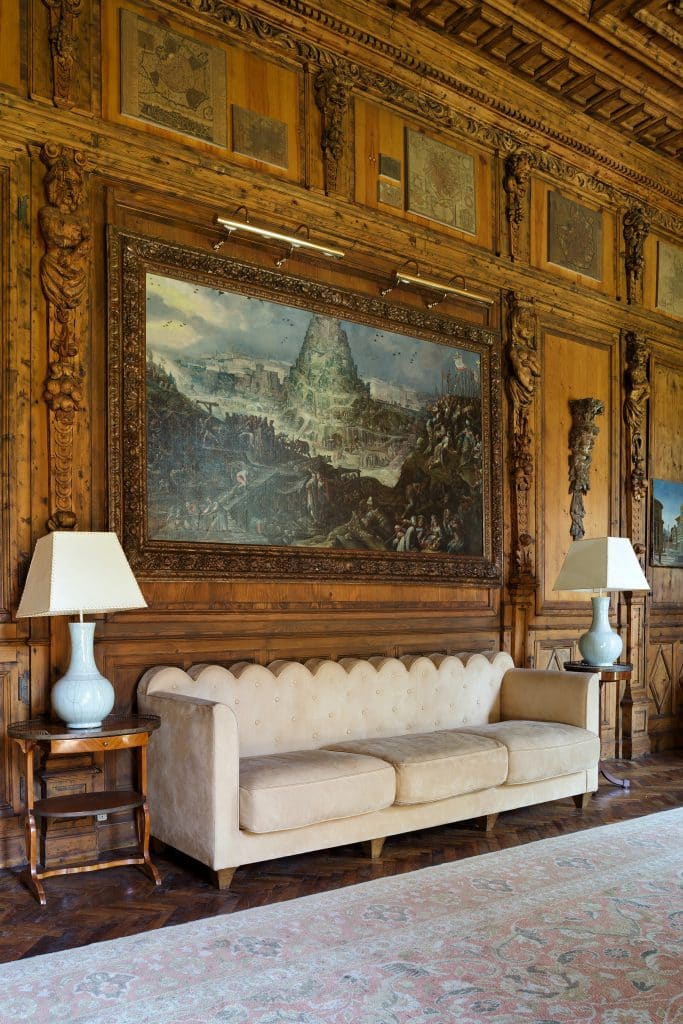 Portaluppi created two iterations of his scalloped-back sofa, using one in his studio and placing the other in a niche in his Casa degli Atellani apartment. The originals were covered in satin; the reissues can be done in linen or chamois. 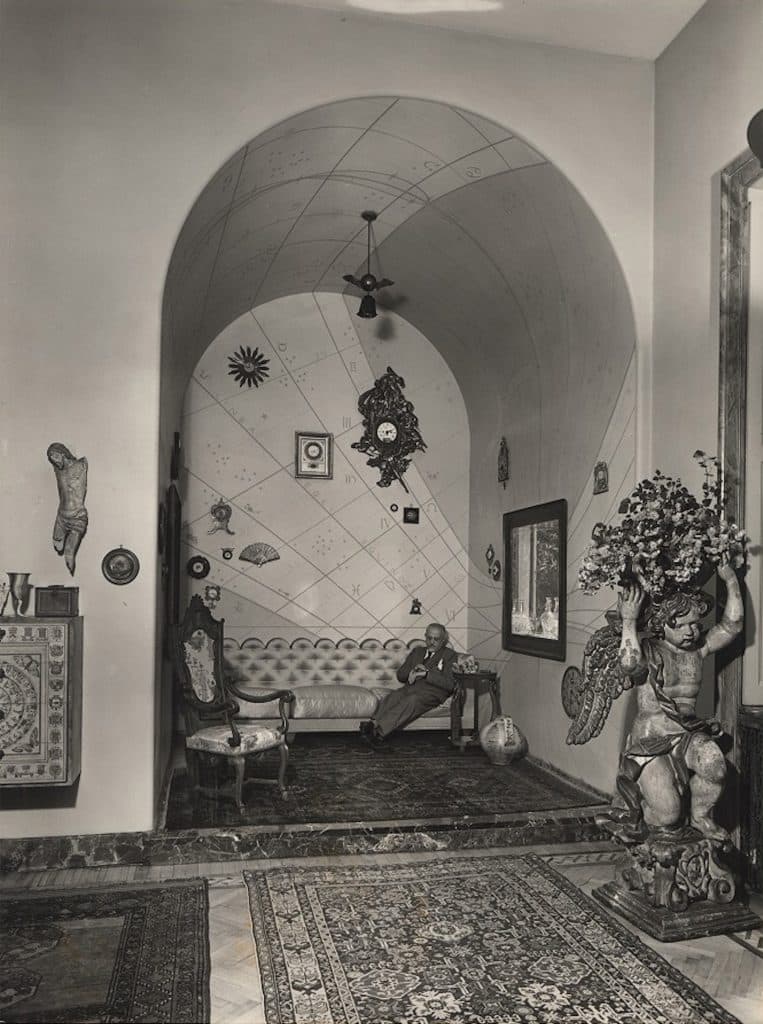 Here, we see Portaluppi checking his watch while sitting on the sofa in that alcove, which was known as the sundial niche because of its wall decoration. 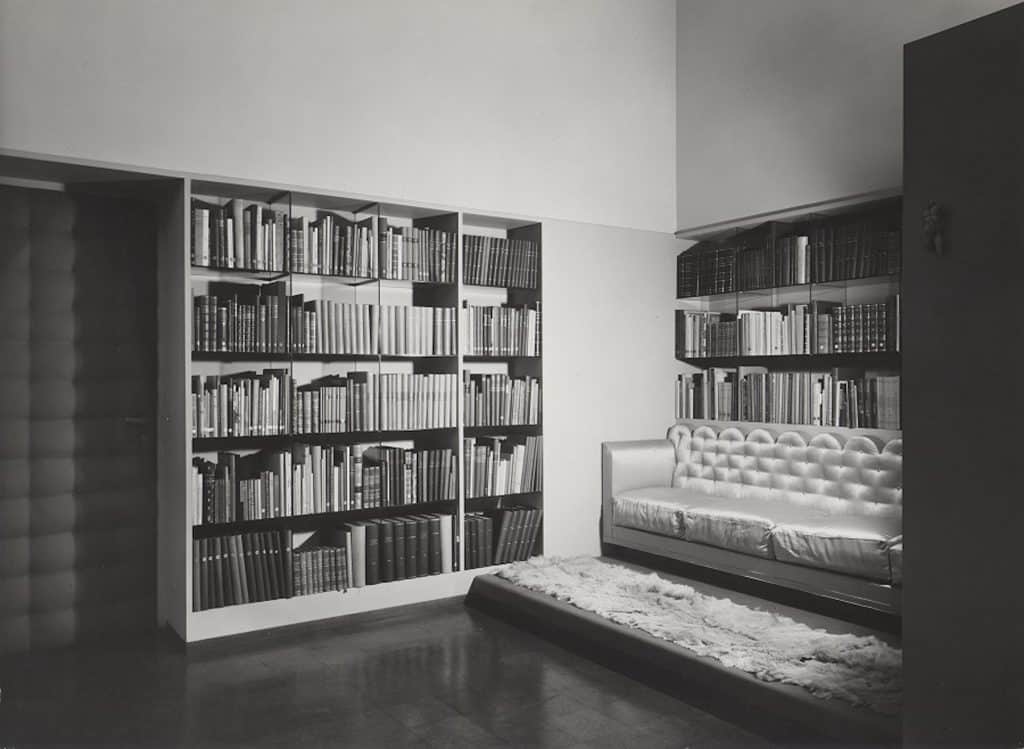 The sofa is surrounded by books in the architect’s studio, which now houses the offices of the Fondazione Piero Portaluppi. 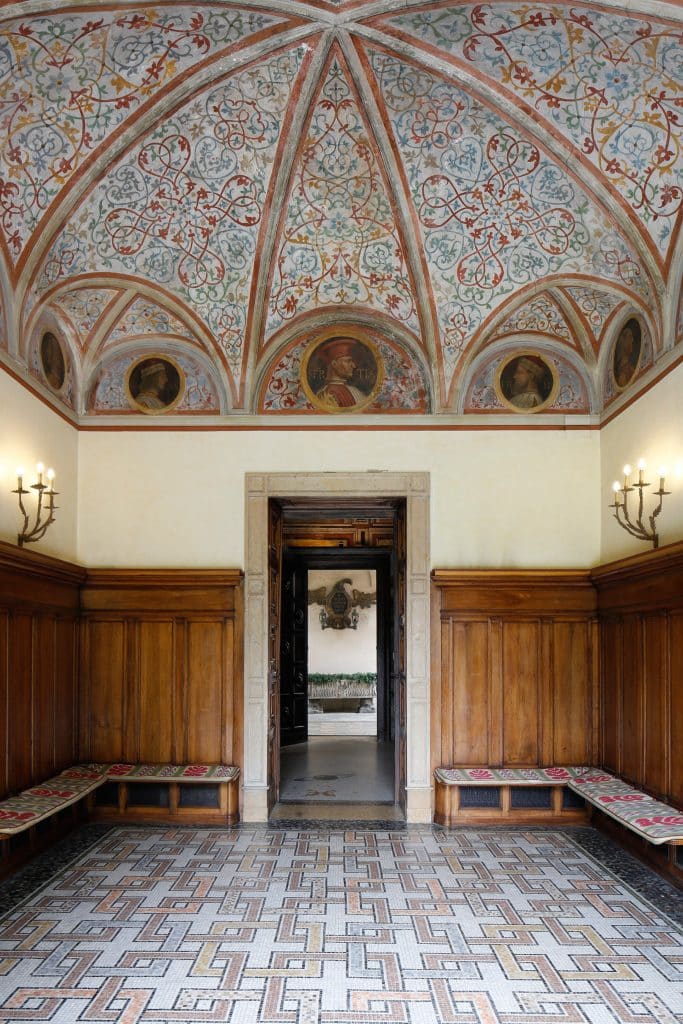 To protect them during World War II, the lunettes containing images of Sforza family members were moved from the palazzo’s portrait hall to the more fortified Sforza Castle, elsewhere in Milan. The ceiling frescoes, dating to around 1502, were done by Bernardino Luini, one of Leonardo da Vinci’s followers — the design, in fact, is known as nodi vinciani (Da Vinci’s knots). 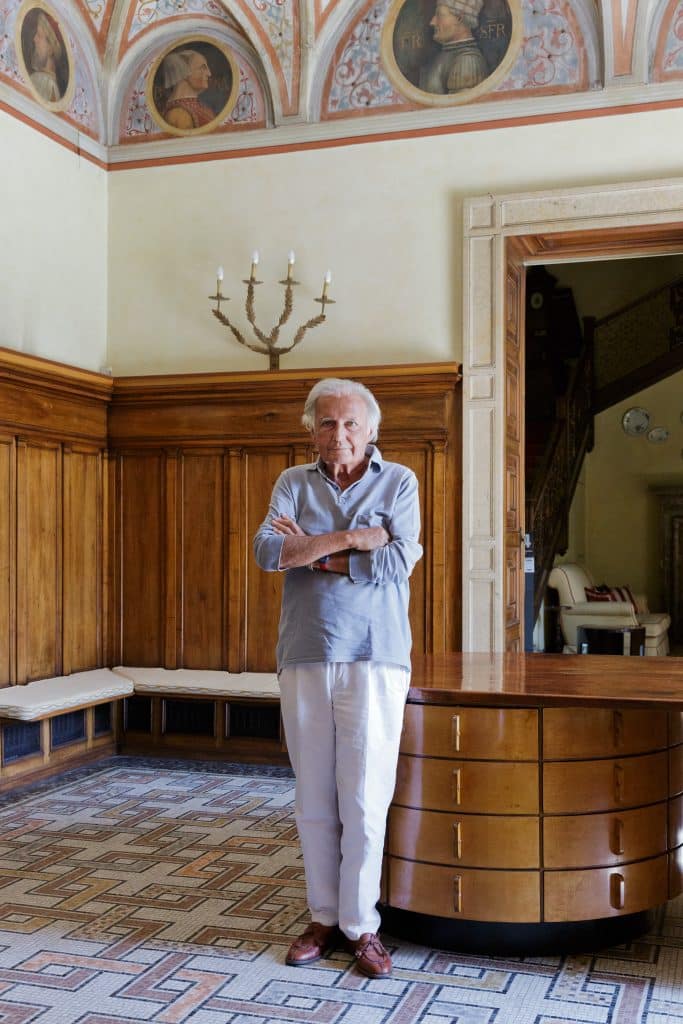 “It would be impossible to write the history of Milan and of the architecture of Milan in the twentieth century without talking about him,” Castellini Baldissera says of his grandfather. He stands in front of the Omnibus desk in the palazzo’s portrait hall. 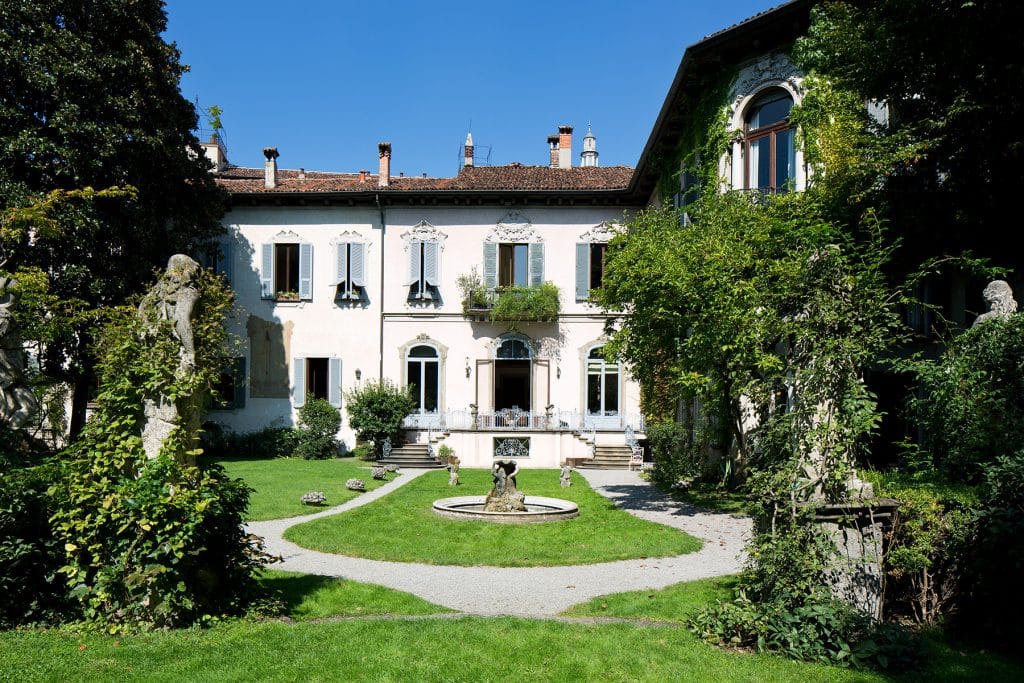 Arranged around two courtyards, the property comprises two palazzos that Portaluppi combined in his 1919-to-1921 renovation. They are located at 65 and 67 Corso Magenta, just across the street from the church where Leonardo painted his Last Supper. 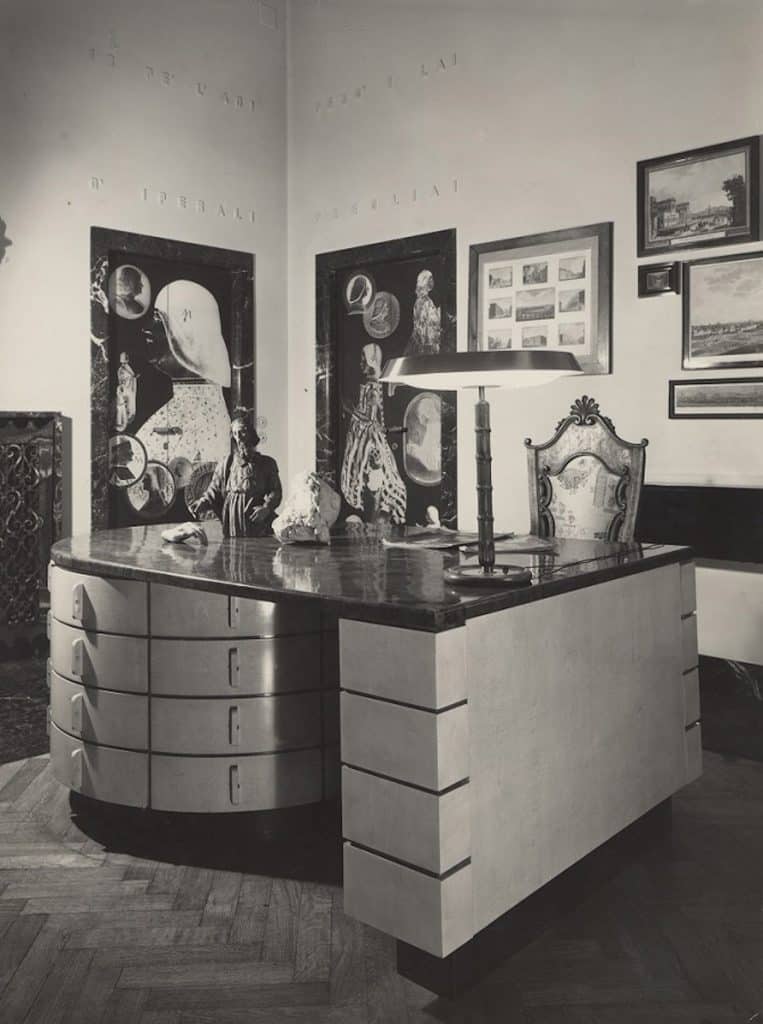 In a vintage photograph, the omnibus desk holds pride of place in Portaluppi’s studio. 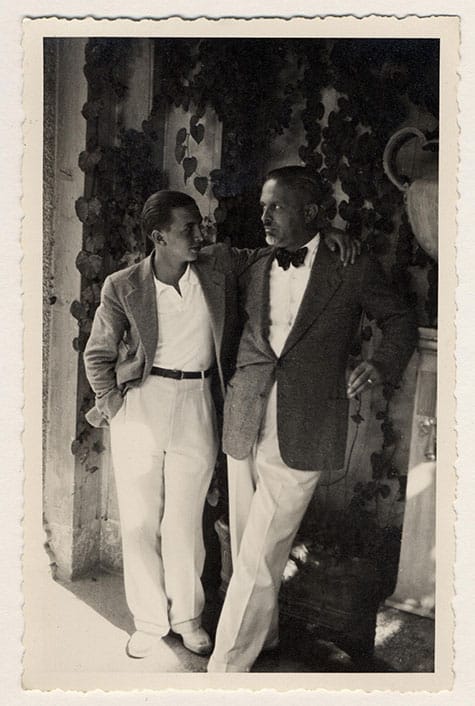 In a photograph from the 1930s, Portaluppi poses outside the Casa degli Atellani with his son, Tuccio, who was killed in World War II.

4. What exactly was Portaluppi’s connection to the Casa degli Atellani house?

My grandfather planned a renewal of the Casa degli Atellani twice. Where the palazzo is today, there once were two houses — their numbers were 65 and 67 on Corso Magenta. In 1919, Ettore Conti purchased them both and asked Portaluppi to transform them.

Over three years, Portaluppi managed to make out of them one unique house, tearing down the wall that divided the two, adding a building and reconfiguring the rooms while always maintaining the spaces and the neoclassical exterior. After the Second World War, when the house was partially destroyed by the bombings, he restored what he could and designed a new facade.

Portaluppi lived in an apartment that at the time was on two floors, at the bottom of one of the property’s two courtyards. He moved into the house in 1922 and lived there until the day of his death, in 1967. He never moved out, not even during the war. 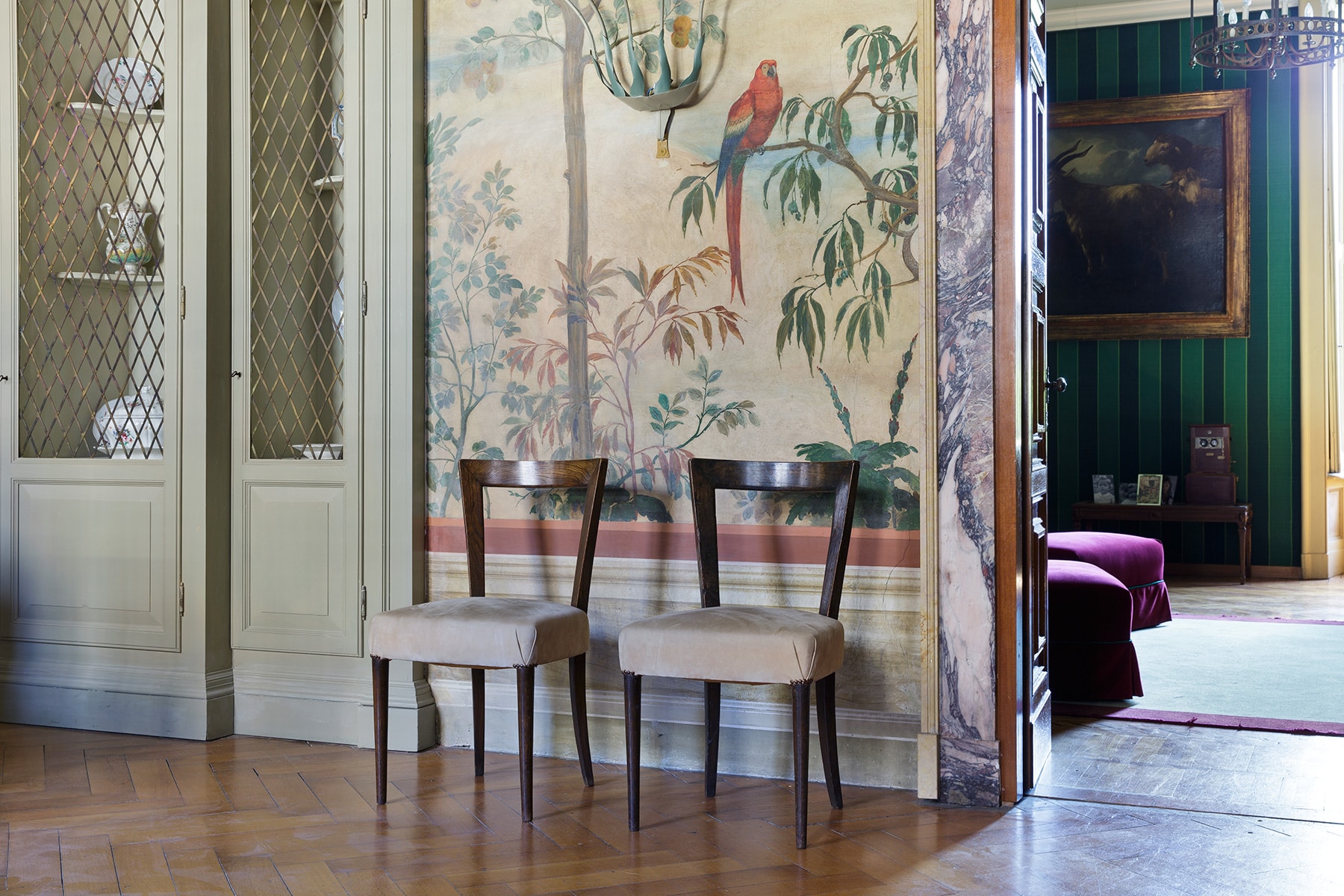 The dining hall on the upper floor displays the same oak chairs seen above at the table in the stair hall. Portaluppi designed them in 1949 for the home of Oda Gadda, his cousin’s daughter. He created the botanical frescoes in the 1940s to make the space look like a greenhouse.

5. Can you tell us about Leonardo da Vinci’s relationship to Casa degli Atellani and the work he did there?

Leonardo da Vinci worked on his Last Supper in the church just in front of the Casa degli Atellani for three years. We also know, thanks to Matteo Bandello’s novellas, that Cecilia Gallerani, Ludovico Sforza’s lover and the subject of Leonardo’s painting Lady with an Ermine [1489–90], was a frequent guest at the house. Leonardo would walk through the house to check on his vineyard, because it was the fastest way to get there. There are many connections between the house and Leonardo, and even more plausible fantasies.

This year, three years after the Leonardo vines were replanted, the vineyard has finally produced, in an incredibly quantity, its fruit. This autumn, we will harvest the grapes. 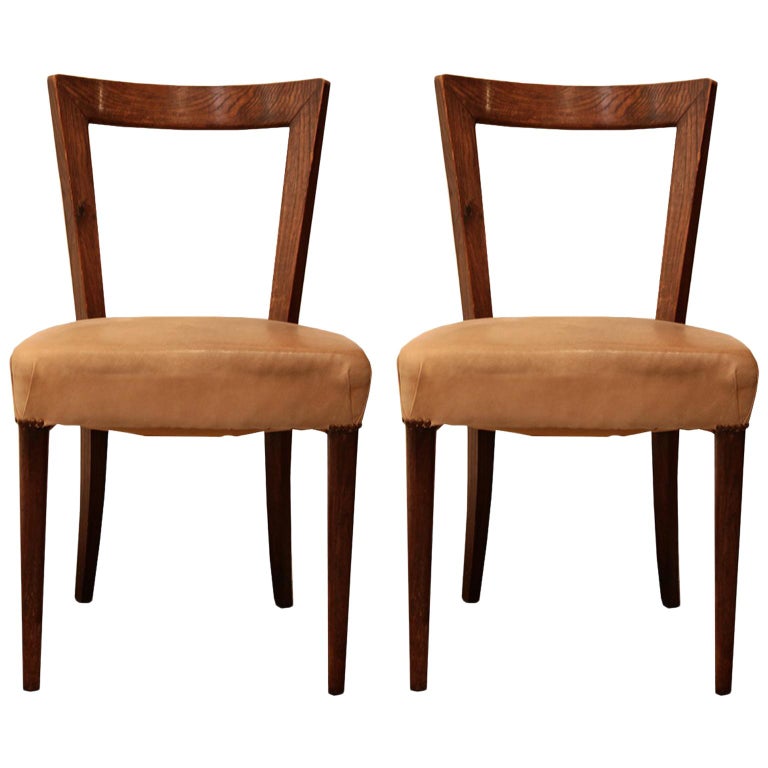 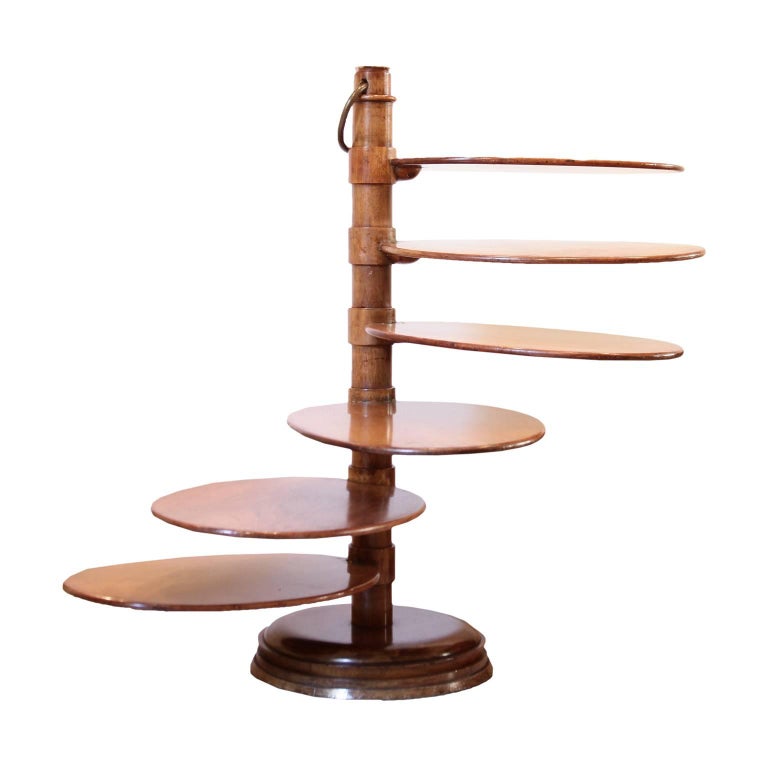 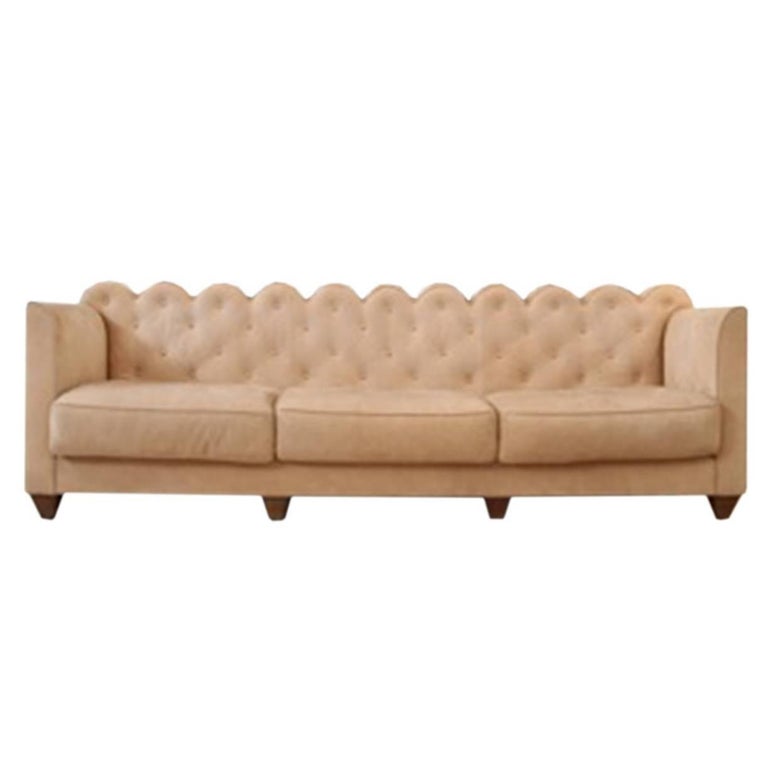 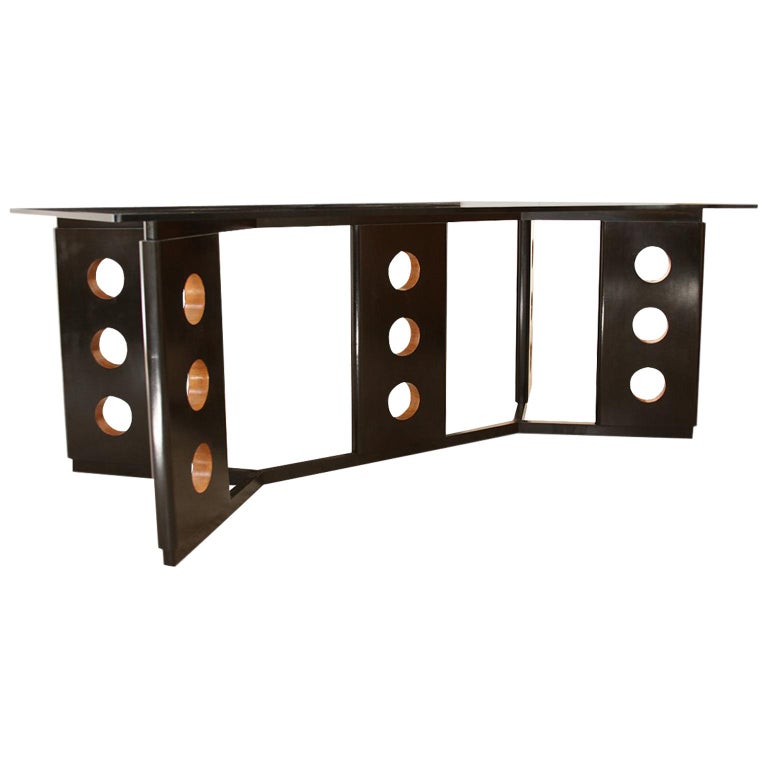 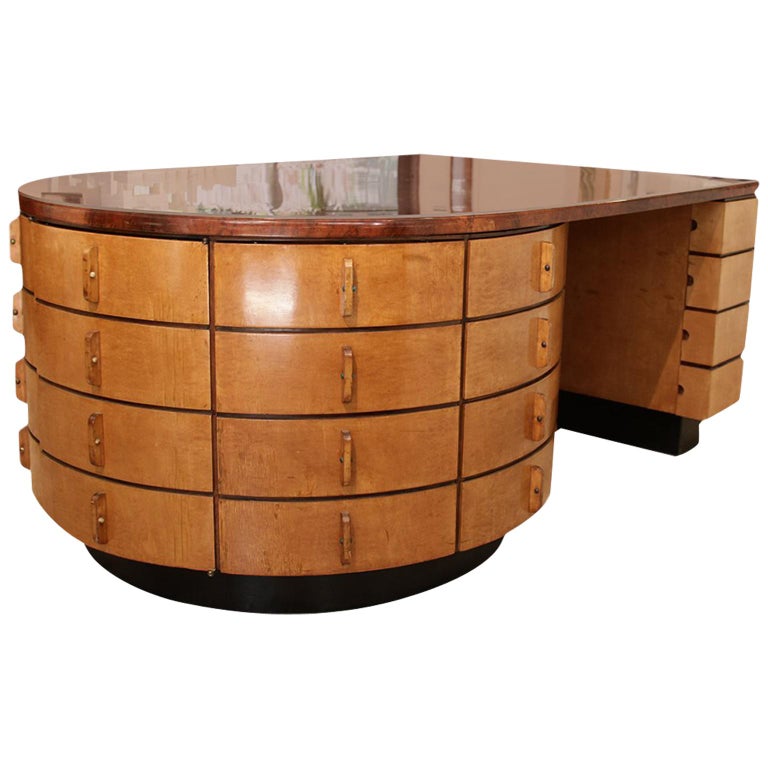