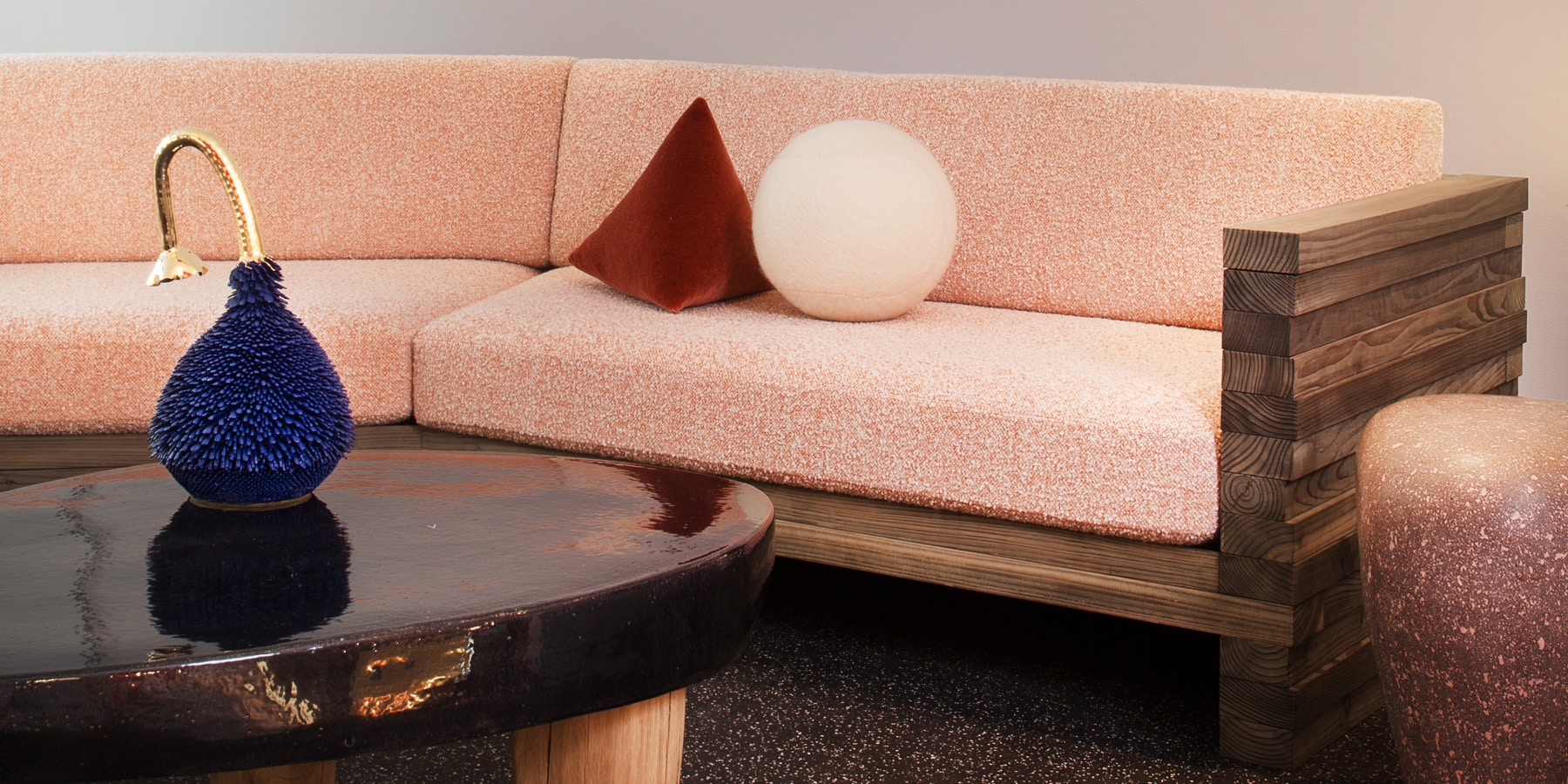 The Parisian interior architect is taking on the role of curator in a show featuring his new furniture and lighting pieces. 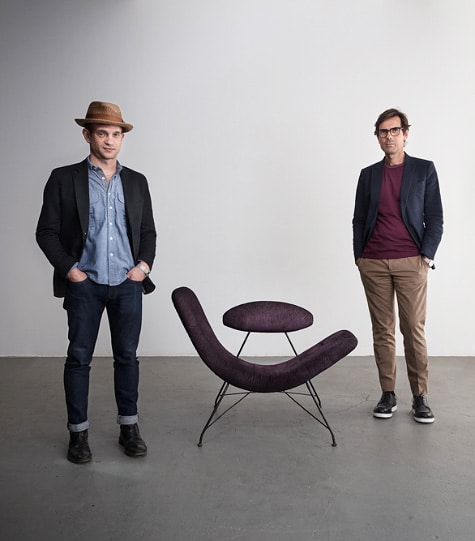 R & Company cofounder Evan Snyderman and Pierre Yovanovitch with a chair by Martin Eisler, one of the designers featured in the gallery’s new exhibition, “Oops,” which Yovanovitch curated. Top: Yovanovitch’s Stanley sofa has a larch frame. Photos by Joe Kramm

You want to talk about the greatest French designer of the 21st century? It’s Pierre Yovanovitch.” This statement, made matter-of-factly by R & Company cofounder Zesty Meyers, may at first sound hyperbolic. But the Parisian interior architect and designer’s work supports such bold declarations from Meyers, who is hosting an exhibition containing 24 of his bespoke furniture and lighting pieces, of which he says: “We’ll never be able to do a show quite like this again in our lifetime.

That show, “Oops,” on view in the Manhattan gallery through October 26, is Yovanovitch’s first in the United States and took a year to come to fruition. The exhibition features 24 bespoke furniture and lighting pieces by the architect, and it was born from a longstanding friendship and working relationship between Yovanovitch, Meyers and his R & Company partner, Evan Snyderman.

“I’ve known Zesty and Evan for some time, and when they approached me about being the guest curator for their annual show, I was delighted to accept,” says Yovanovitch. (Past curators from the interiors world have included Kelly Behun, Tony Ingrao and the late, great Jim Walrod.) “It really allowed me to showcase not only my own furniture but also my curatorial work, by incorporating several pieces from R & Company’s permanent collection alongside my designs.” He tapped works by such iconic designers as Wendell Castle, Joaquim Tenreiro, Rogan Gregory, Greta Magnusson-Grossman and the Haas Brothers to round out his creations. 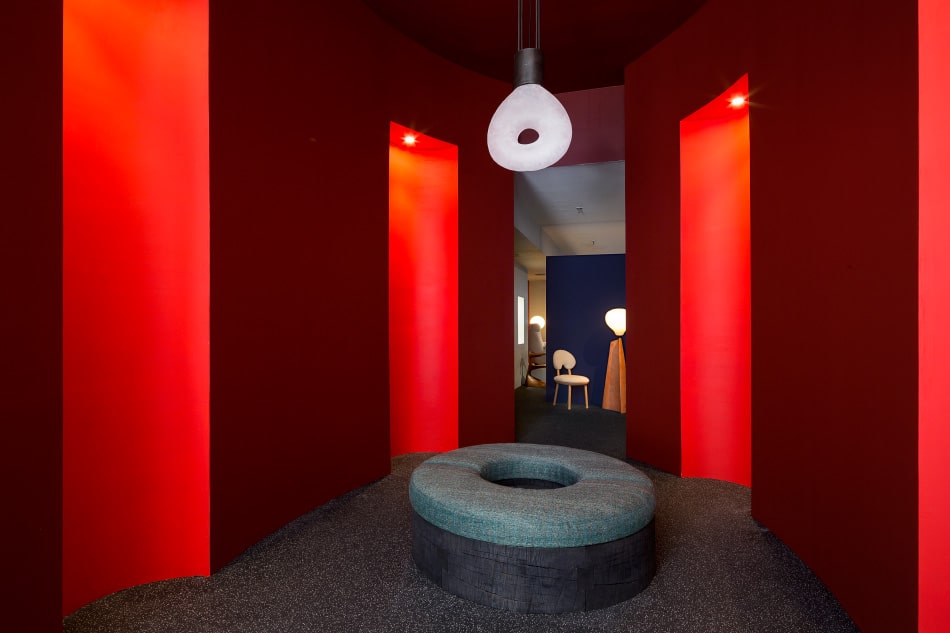 In “Oops,” the Pierre Yovanovitch–curated R & Company exhibition, a Zou! pendant hangs over a Donut bench. Photos in this slideshow by Joe Kramm 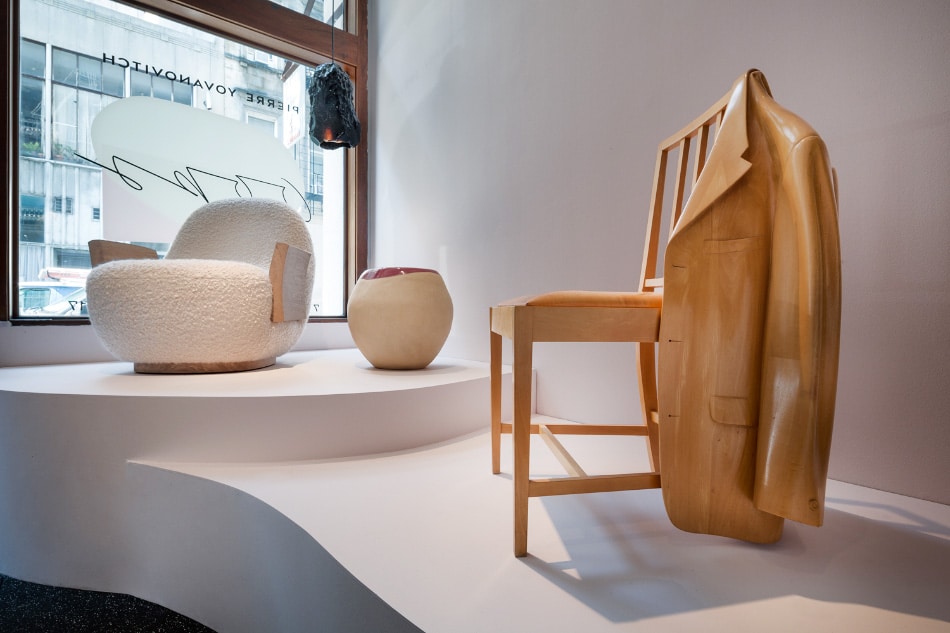 The exhibition includes work by other designers, such as Wendell Castle, Greta Magnusson-Grossman and the Haas Brothers. Here, Castle’s Chair with Sport Coat is on display. 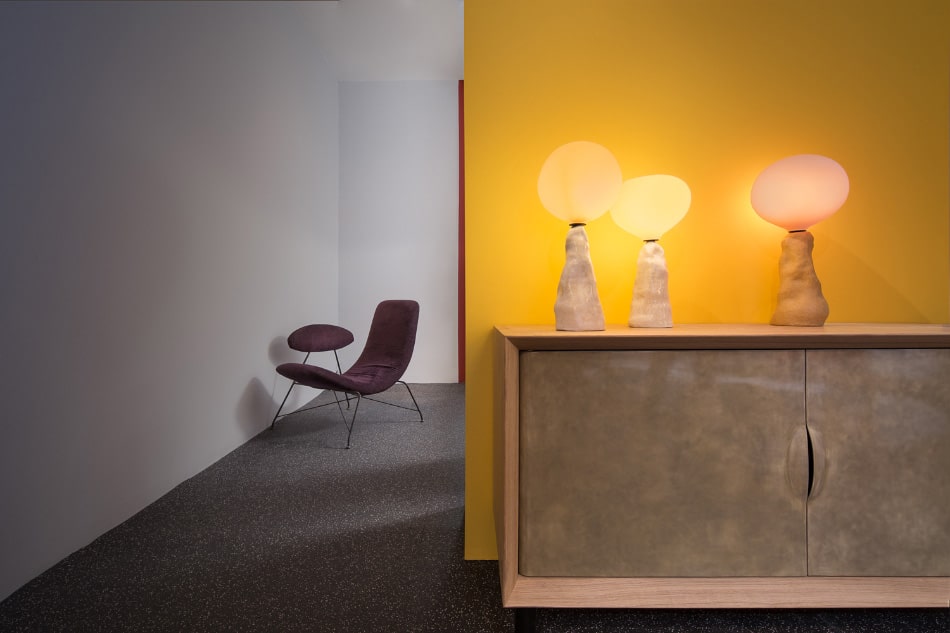 From left, a 1950s Martin Eisler chair and a cabinet topped with Yovanovitch’s E.T. lamps. 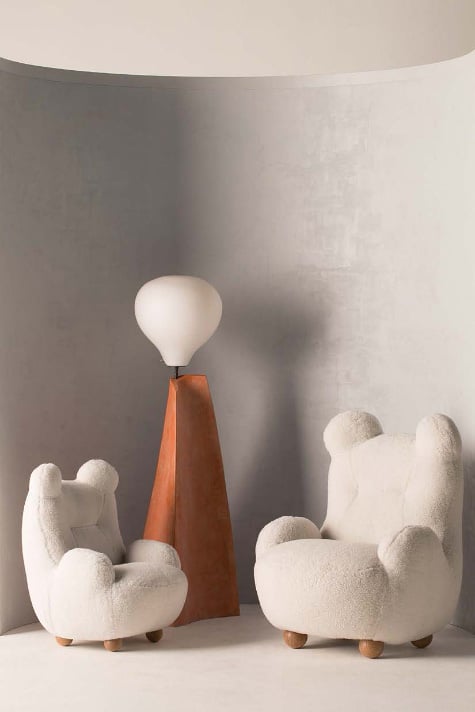 Since Yovanovitch launched his firm, in 2001, his projects have peppered the pages of countless respected design publications, and in 2010, he claimed a place on Architectural Digest’s AD 100 list. Known for his sumptuous yet uncluttered and comfortable take on interiors, he has applied his detailed approach and fearless signature aesthetic to such five-star hotels as Paris’s Hotel Marignan and luxury residences the world over. Before earning his stripes in interior architecture, however, Yovanovitch spent nearly a decade working for Pierre Cardin. Perhaps his time with the fashion house helped him hone his impeccable sense of scale and style. “His instinct for color, tone, texture and volume in a room is unparalleled,” Meyers says when asked what sets Yovanovitch apart from his peers.

“Oops” is a marriage of the unexpected, the old and the new. “My approach to putting the show together was to mix both vintage design and contemporary works,” explains Yovanovitch. “It was a chance to initiate a dialogue between twentieth- and twenty-first-century design while trying to maintain close attention to detail in both aesthetics and production.”

At first sight, each vignette in the exhibition appears to feature a meticulously edited juxtaposition of scale and volume. Look a little closer, however, and you see Yovanovitch’s signature fanciful pen draw a new picture. Maybe what is on display is a distinctly French je ne sais quoi — an innate ability to design in a way that cannot easily be described — for all the pieces in this show are reminiscent and referential while also being completely new and inspired. 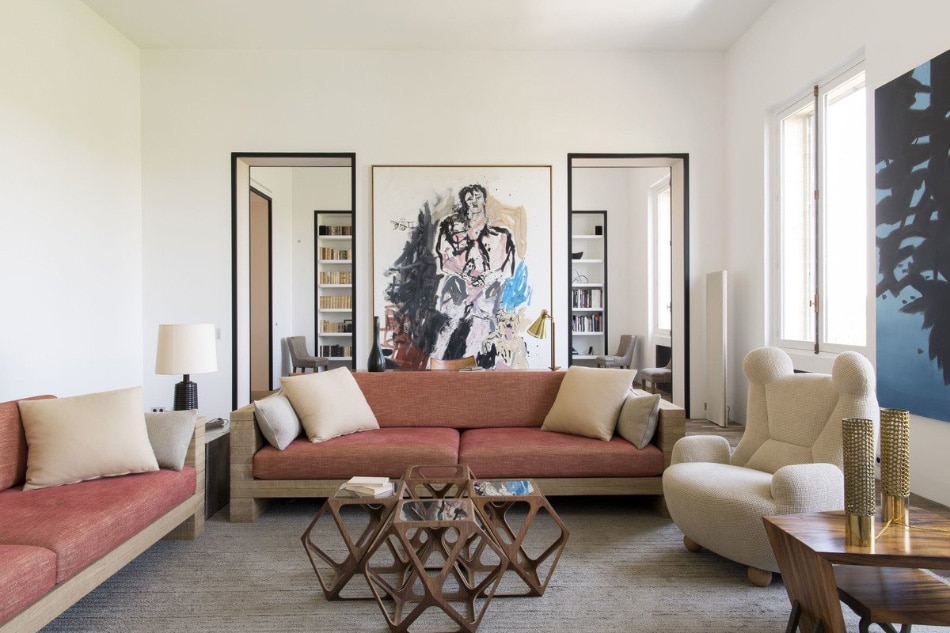 The living room of this Paris apartment by Pierre Yovanovitch Architecture d’Intérieur features sofas by Yovanovitch and his Papa Bear chair. Photo by Stephan Julliard 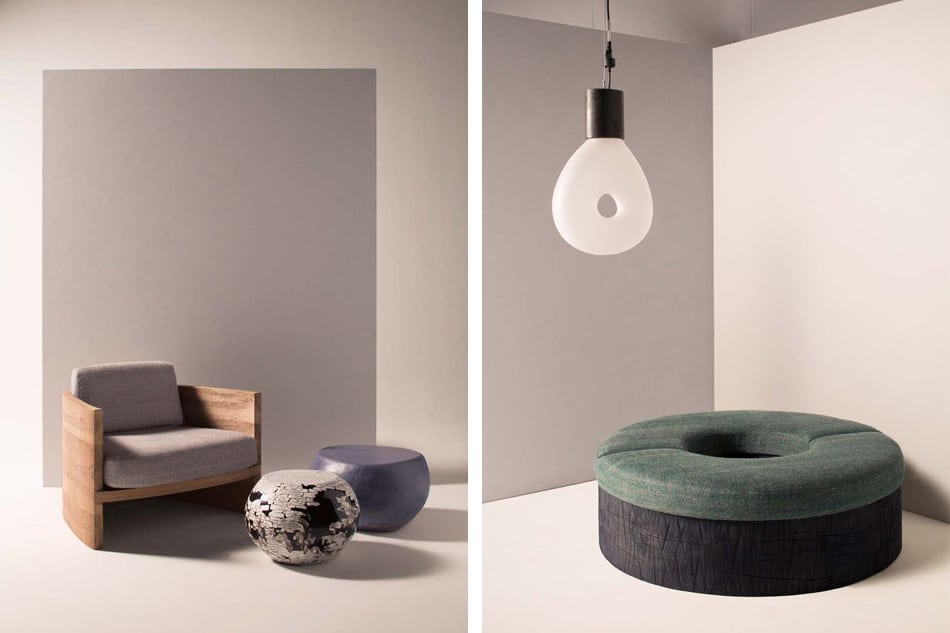 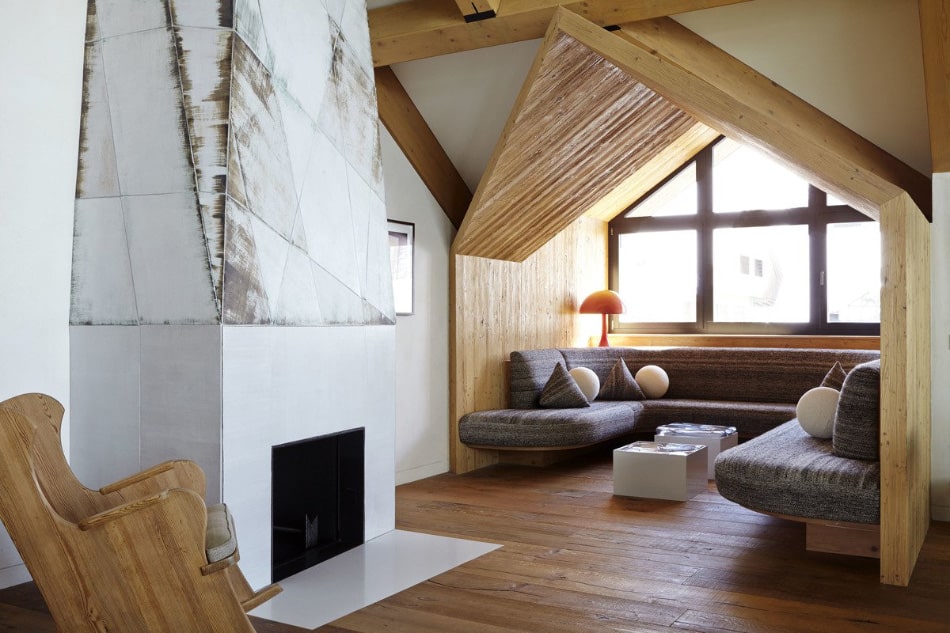 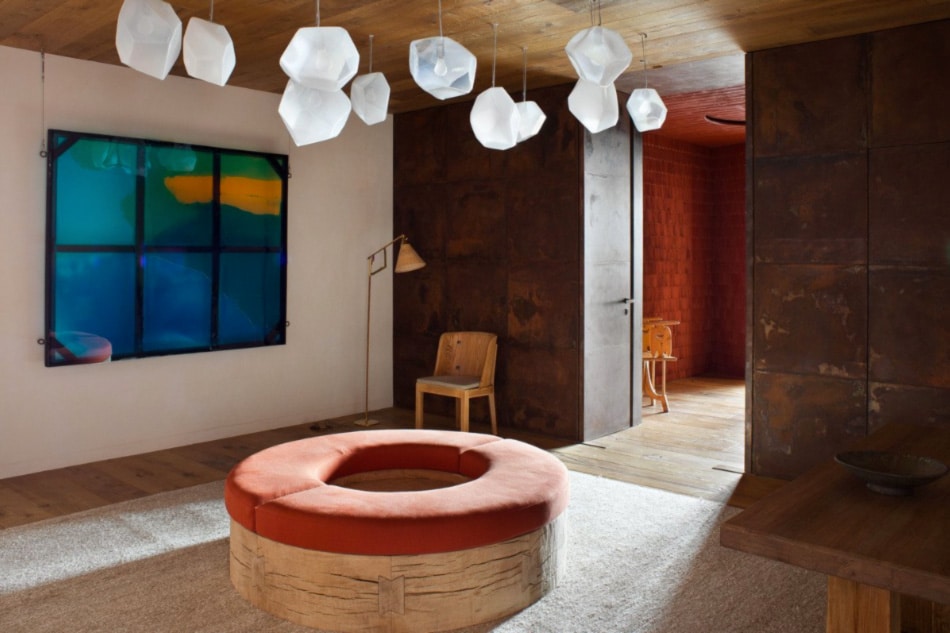 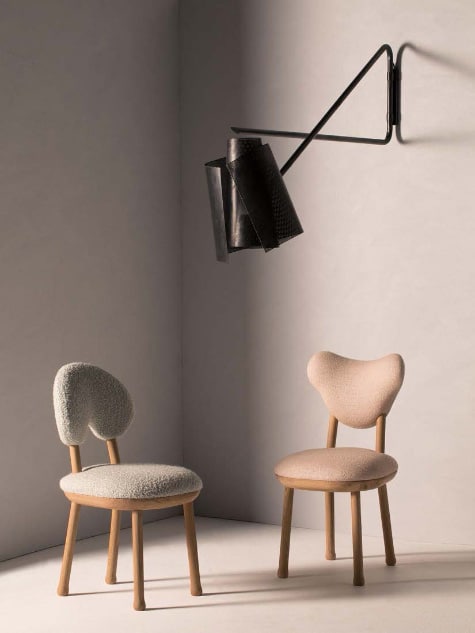 His Laura wall lamp is mounted above Monsieur and Madame Oops chairs. Photo by Jean-François Jaussaud

“I guess I just felt that it was important for me to stay true to my vision, because in the end, that’s what makes a good work stand apart,” Yovanovitch says. “I did not want to design for the sake of design. I wanted to introduce pieces that people could really live with. Since this is my debut solo exhibition in the U.S., it was also important to me that it didn’t come across as overly serious.”

This lighthearted approach to minimalism is evident in many of Yovanovitch’s new products. Take his E.T. table lamp. Composed of ceramic bases holding hand-blown glass globes, the light conjures its namesake 1982 movie, especially the glowing finger and leathery skin of the extraterrestrial main character.

Other standout pieces include the Donut bench and Zou! pendant light, as well as the adorably welcoming Mama, Papa and Baby Bear armchairs. Three different-size versions of Yovanovitch’s Ours seat, they have a fairy-tale quality, reaching out to viewers of all heights as if offering a cozy hug. (The trio is also a cheeky send-up of Hans Wegner’s iconic mid-century Papa Bear chair.)

When asked for his favorites among his new furniture pieces, Yovanovitch is quick to call out the MAD armchair. “Chairs are one of the more challenging pieces to design, and this one came out, in my opinion, as the perfect combination of comfort, craft and aesthetic,” he says. “It incorporates hand-carved oak with custom upholstery to forge an unconventionally designed seat that was originally inspired by an airplane chair, as bizarre as that sounds.”