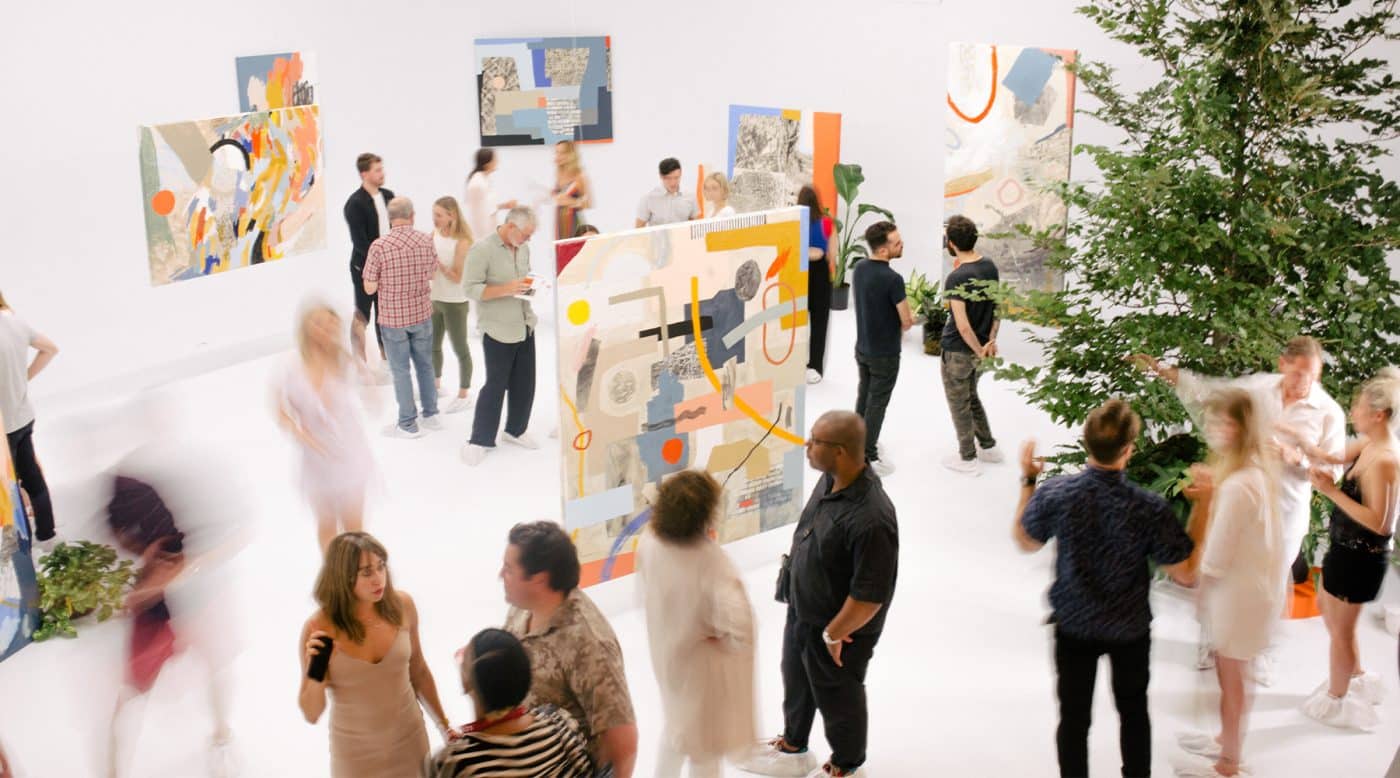 With their outsize gallery space and multidisciplinary talent agency, Paulina Petkoski and Samantha Bankle Schefman are elevating the careers of all sorts of Detroit artists.

March 27, 2022Detroit’s art scene is often described as “burgeoning” or enjoying a “renaissance.” According to Paulina Petkoski and Samantha Bankle Schefman, however, the city’s creative pulse has been beating fast and furious for nearly a decade, thanks to myriad underground initiatives led by a thriving youth culture.

The two women’s exhibition space, located in the east side neighborhood of McDougall-Hunt, opened in 2017, although their project was founded in 2012 as an online magazine providing an alternative take on Detroit’s diverse artistic landscape.

As their network grew so did their purview. The duo soon launched a series of live events, including monthly artist showcases, music concerts and documentary screenings. Eventually, with the help of a government grant, they realized their dream of establishing a different kind of gallery: traditional in its function as a public display forum, unconventional in its philosophical position as an ideas factory with a community conscience.

“A lack of infrastructure and financial resources in Detroit resulted in an exodus of talented people, who sought out the more well-trodden artistic routes of L.A. or New York,” says Petkoski, who, like her business partner, had a blossoming creative career in New York before embarking on this more socially engaged role. (She previously worked as a designer and stylist, while Schefman was a freelance jewelry and watch designer.)

“One of Playground Detroit’s biggest goals has been that of retention, to support the local creative economy,” she adds, “so that young gifted artists can continue to prosper here at home and help build a stronger narrative for this city as an international art destination.”

“We actually attended the same high school in Birmingham, Michigan,” Schefman says. “But let’s just say we didn’t really hangout back then! We reconnected in New York, where we were both very immersed in the cultural scene. In Brooklyn, there was always this buzz, with big audiences attending art and music events, which was exciting. But it didn’t always mean the work was crazy special. We realized that Detroit’s creative community really deserved that kind of attention.

“I think understanding social equity has always been my strong point,” she adds. “It provides a gateway to truly unique experiences in life.”

Here, the cofounders explain the reach of their business and introduce some of their favorite creatives from their ever-growing portfolio.

What drew you back to Detroit a decade ago?

Samantha Bankle Schefman: It felt like we were on the cusp of something really exciting, an opportunity to be a big fish in a small but energetic pond. In New York, studio prices had risen to an all-time high, meaning that many of the artistic communities we were involved with had become fragmented.

People stopped supporting each other’s events, and there was a feeling of estrangement that felt difficult to harness. It was a turning point for us. We were both disillusioned with fast fashion. And so, we delved into business courses and started researching grants, because we knew how much talent there was here.

When Detroit filed for bankruptcy [in 2013], the government provided substantial funds for community redevelopment, because there was a strong need for entrepreneurs. We are now on year two of our Emerging Artists Fellowship initiative, which is supporting ten emerging Detroit artists, who’ve each received two thousand dollars to help develop their craft.

Have your design backgrounds helped you become better gallerists?

Paulina Petkoski: Having both lived in New York and studied art and design — me at the Fashion Institute of Technology and Samantha at Detroit’s College for Creative Studies — we have a wider perspective on the global art scene and the importance of having a solid support system in place.

You have to be very proactive when promoting and supporting young artists. It requires dedication and commitment, and you also have to take risks. As a start-up, we’ve gone the extra mile, especially thanks to our online presence, which we hope will continue to introduce the most talented artists to the primary art market.

I honestly believe that our artists, many of whom now have international representation, demonstrate that we have an incredible eye for talent.

Do you think Detroit’s art scene has been overlooked in the past?

Schefman: Yes and no. No, because there are some really strong names, like Mike Kelley, whose 2013 retrospective completely filled MoMA PS1, which was a huge moment in Detroit’s art history. Hernan Bas has been based here a long time. Chris Schanck is getting a lot of recognition and has a massive one-year show at the Museum of Arts and Design, in New York.

So, we are not short of household names, and there is a growing system of galleries, with each of us in our own distinctive lane. But it’s about being really fresh and innovative when it comes to your programming, and in that way we are pretty unique as a city.

How do you differ from other Detroit galleries?

Petkoski: There are some well-established galleries in Detroit, but their price points tend to be much higher, and often the names on their books aren’t local artists. Likewise, when we launched Playground, there were ad hoc pop-ups and studio events organized by art collectives, but these exhibits weren’t geared toward the wider industry. That’s really what we offer: accessibility, insight and experience.

Schefman: Our next solo show is dedicated to Marlo Broughton, a painter and illustrator we’ve been working with for a long time. He has strong ties with fashion brands because of his commercial experience as a graphic designer, but his latest figurative paintings are really impactful.

They are introspective depictions of how he sees contemporary Black history and his place within that setting, as he connects the past with the present day.

BakPak Durden, a queer artist who identifies as them, is another talent I am really excited about. They are a self-taught hyperrealistic artist and muralist whose work champions Black trans and queer visibility and addresses social issues surrounding gender equality, mental health and disability.

Detroit’s Cranbrook Art Museum is especially interested in working with them, and last year they were invited to take part in the Gucci Changemakers project in collaboration with [homegrown label] DETROIT VS EVERYBODY [for which the artist created a large-scale painting of the label’s enigmatic founder, Tommey Walker] to support nonprofit organizations.

Petkoski: Kaylie Kaitschuck is a fiber artist who uses machine embroidery to create wild and mythical landscapes. Her style is incredibly playful and vibrant, which has especially endeared her to the Asian art market. Her work is currently on show at the Hiromart Gallery, in Tokyo.

I should also mention Patrick Ethen, who is incredibly unique because he uses light as a medium to create amazingly immersive installations that carry a wider message about our relationship with technology.

Finally, why the name Detroit Playground?

Petkoski: That’s easy! The gallery is an extension of what Detroit really is — a playground of sorts where artists and creative entrepreneurs celebrate intersectionality and thrive on a collaborative spirit that really does bring people together. 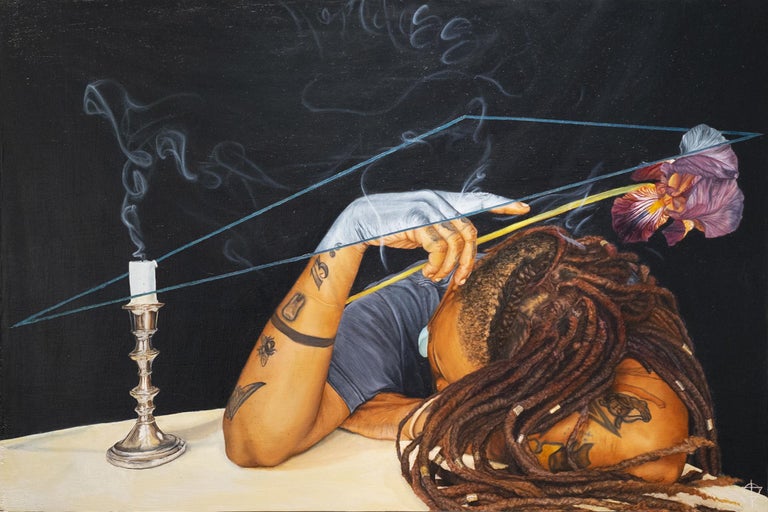 “From self-educated BakPak’s solo exhibition ‘I Feel Like I’ve Been Here Before,’ their self-portrait, like much of their work, is reflective of neurodivergence, intersectional identity, as well as the queer and BIOPIC experiences. BakPak will participate in their first museum exhibition this fall.” 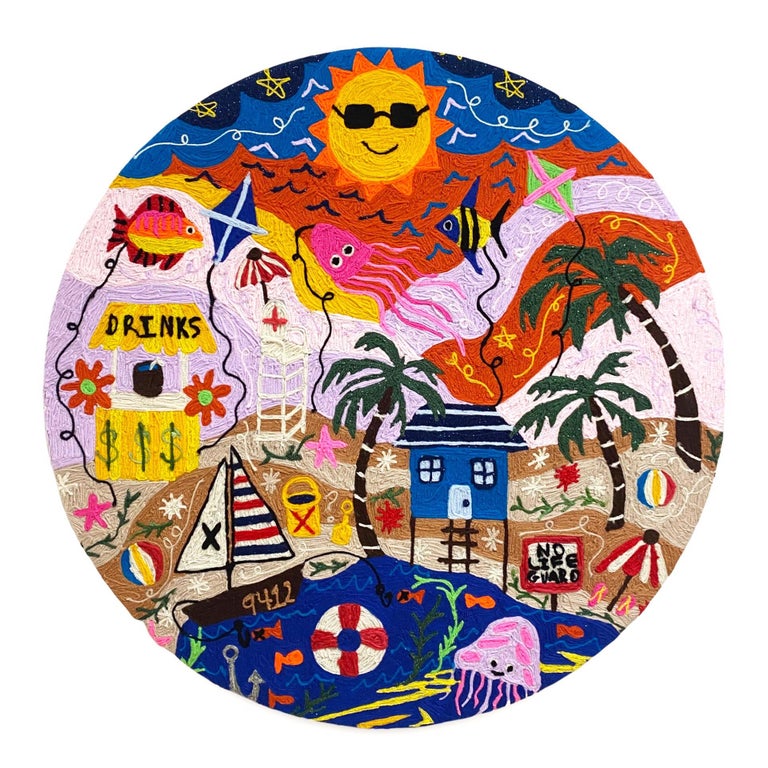 “More is more in Kaitschuck’s chaotic assortment of symbols in her embroidered works. Since receiving her MFA from Cranbrook, she has become internationally recognizable, thanks to her exhibit and following in Asia.” 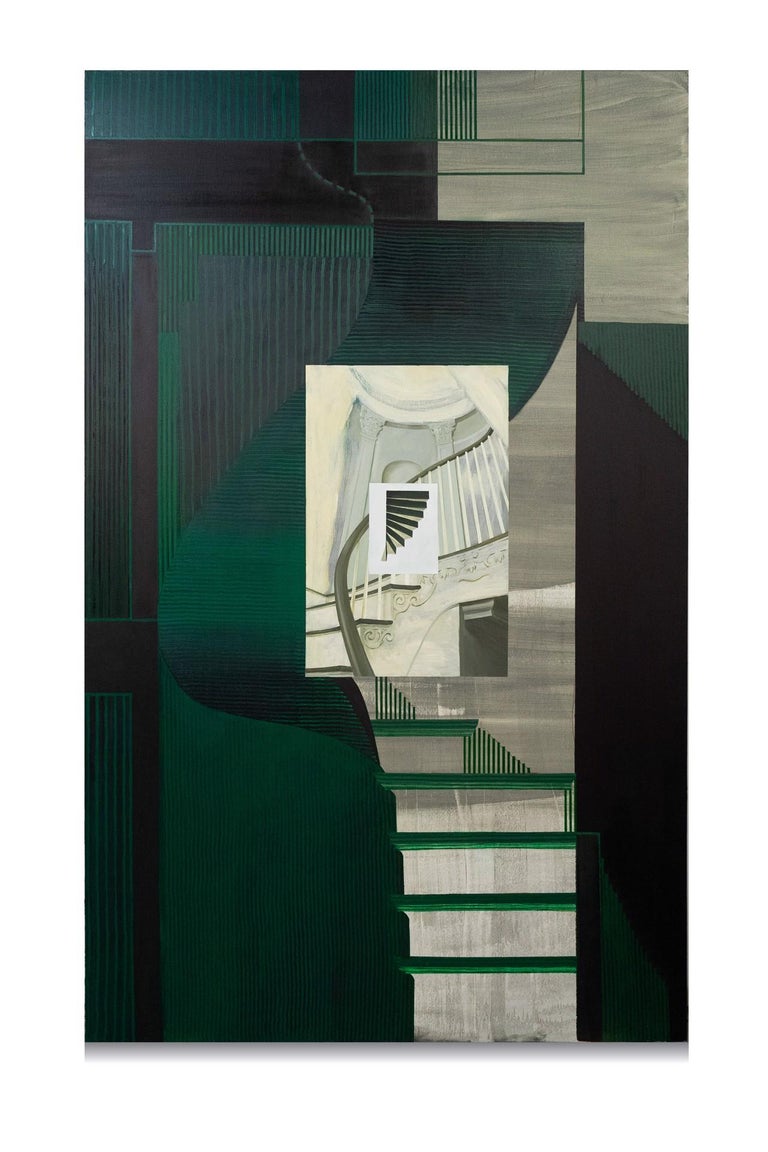 “In this painting, referencing the tarot in personal searching and questioning, one meets symbolic tournaments, theological explorations, mathematical systems and tools of divination. Historic architecture leads us through the seemingly unnavigable, as does the mysterious tarot. Pontious’s False Histories and Grand Naratives is currently on view at her MFA alma mater’s Cranbrook Museum.” 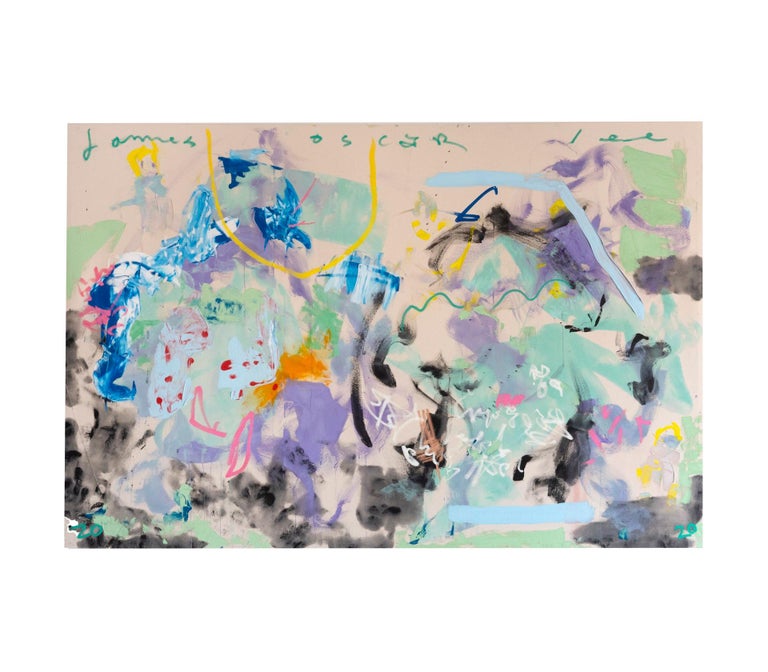 “Lee’s work pushes the boundaries of abstraction with detailed, hidden storytelling left to the viewer’s perspective. The self-taught artist makes his nod to tech by signing each painting across the top and marking the date bottom left as is the layout on each Instagram post.” 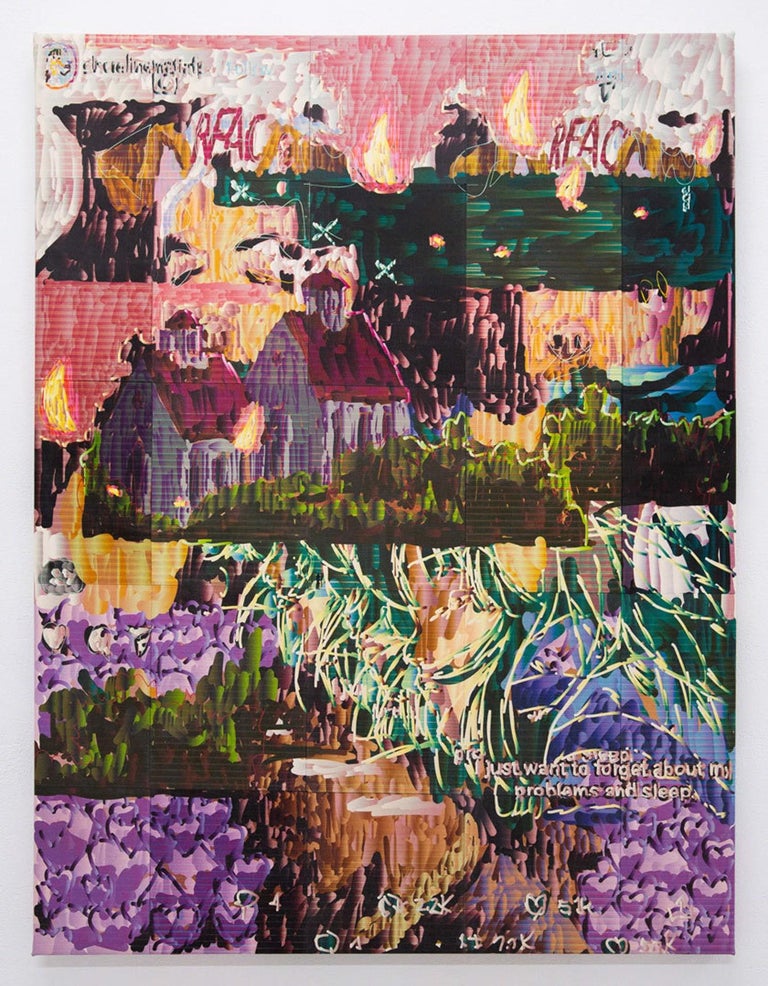 “Digital paintings, printed and sewn together to composite an image, are highlighted in embroidery to merge the daily experience of living between the virtual and real worlds. Even his computer-made brushstrokes don’t aim to replicate but have a rough, natural element to them that draws back to the human hand. One of his largest paintings to date is featured in Michigan’s Louis Vuitton store.” 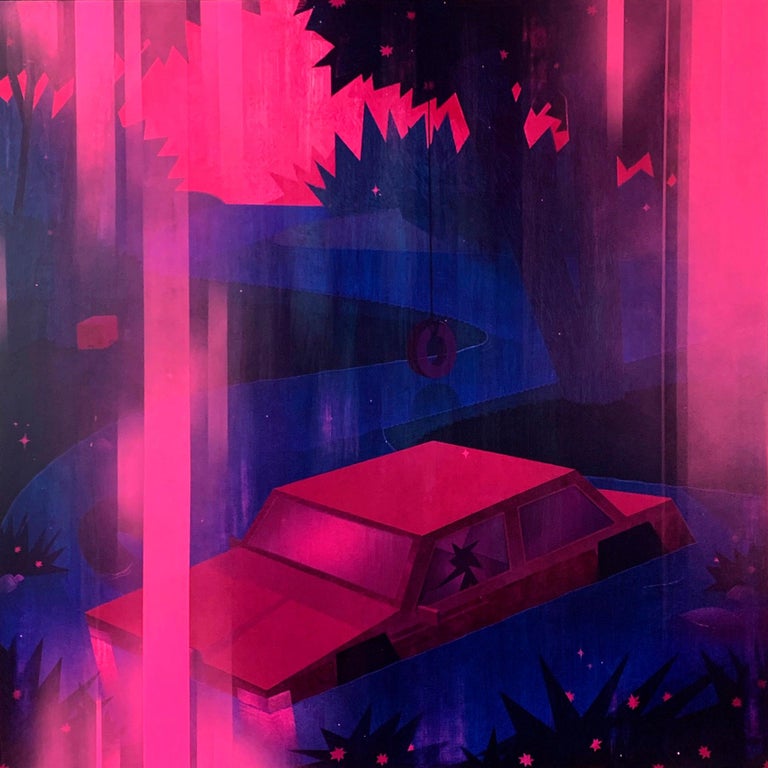 “The surreal juxtaposes the depictions of Polakowski’s real-life surroundings — the experience pushed even further in the optional addition of custom lighting that appears to change the colors and cause a cinematic effect. Each painting is layered in details, down to the perfected wood-grain effect of the window frame.” 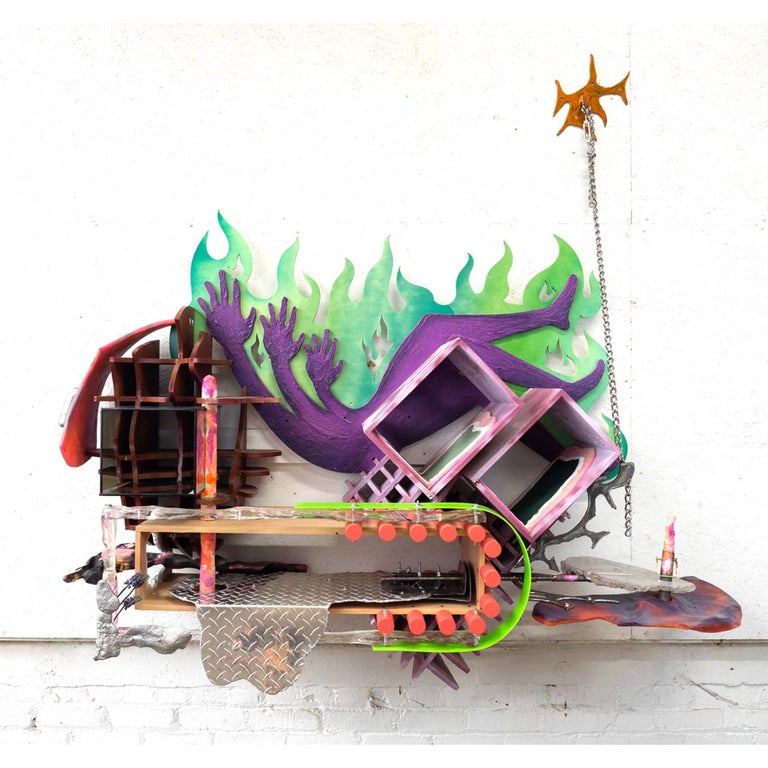 “Unconventional but purposeful, Toomepuu’s furniture is designed to incorporate found objects, balancing absurdity with functionality. He has propelled his career with Playground Detroit and Friedman Benda straight out of undergraduate school.” 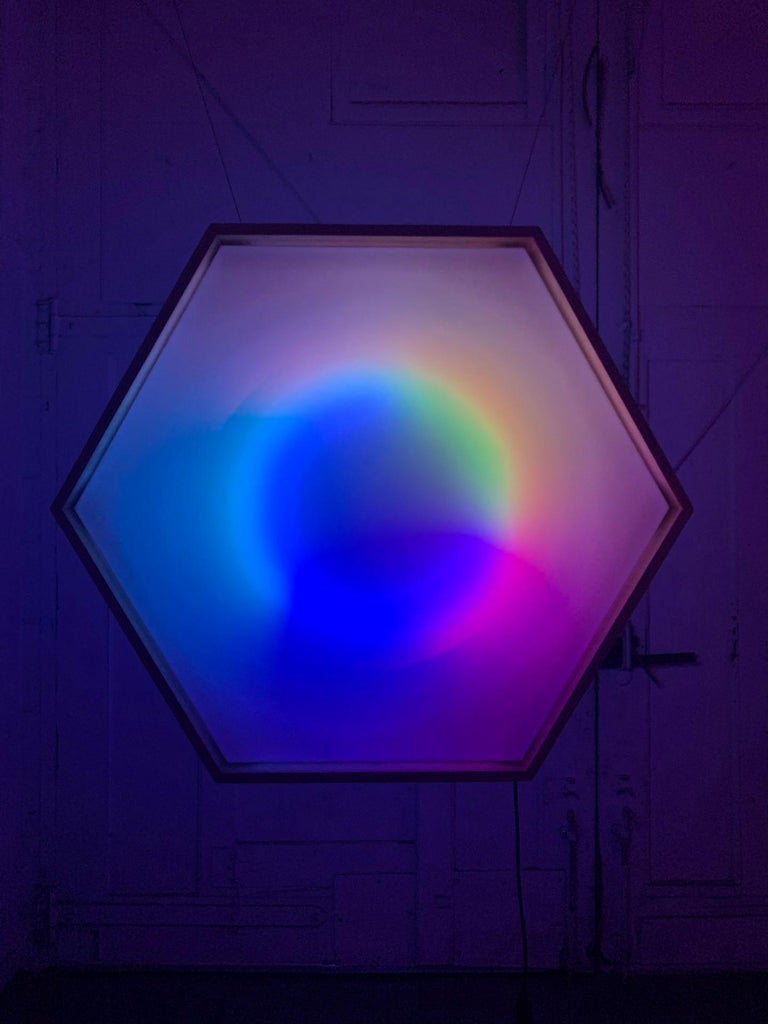 “There is no light-based work more detailed and precise than the hand-wired LED sculptures and wall works by architect-turned-artist Ethen. Here he takes inspiration from Rothko in his exploration of color fields.”