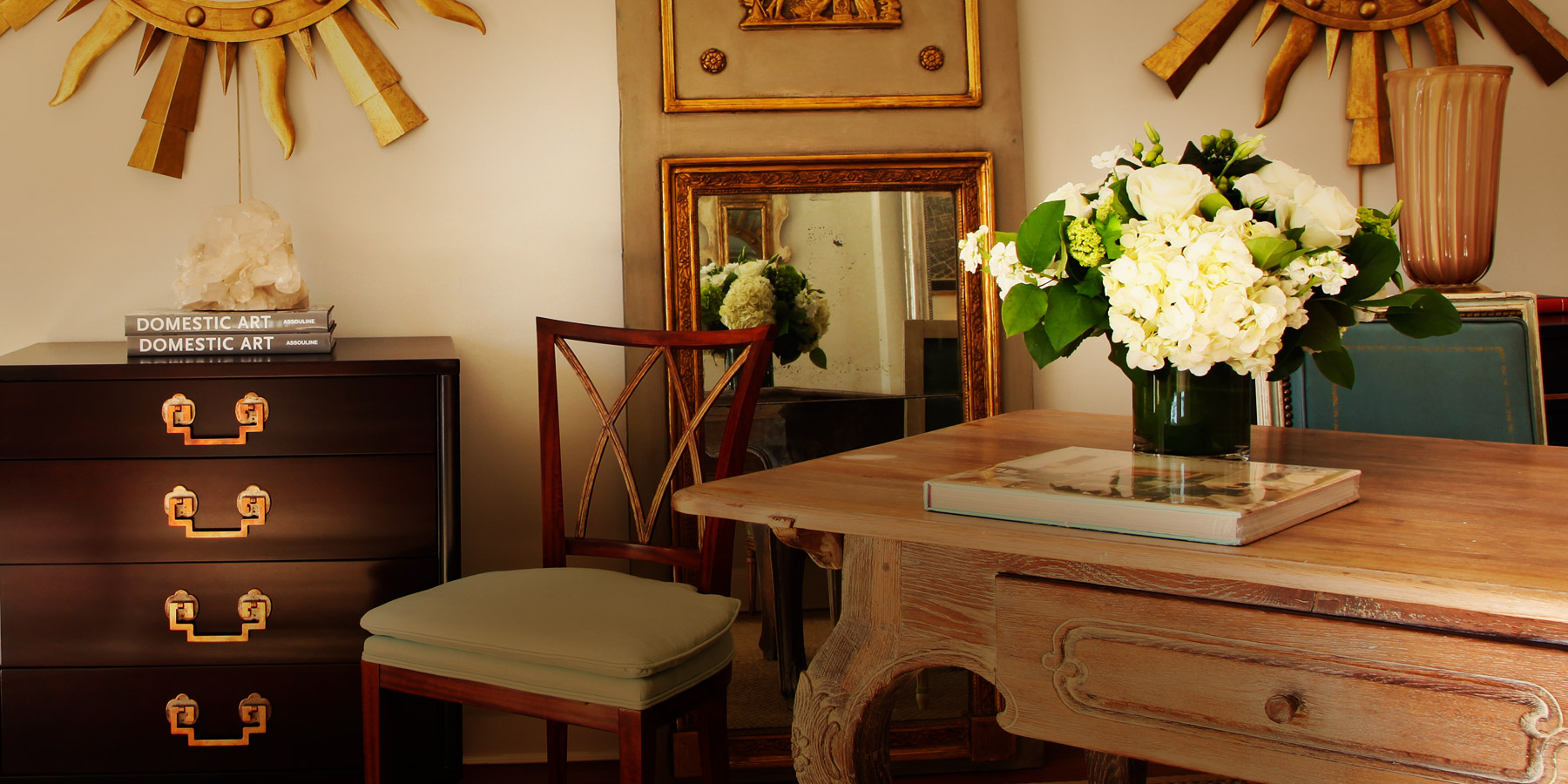 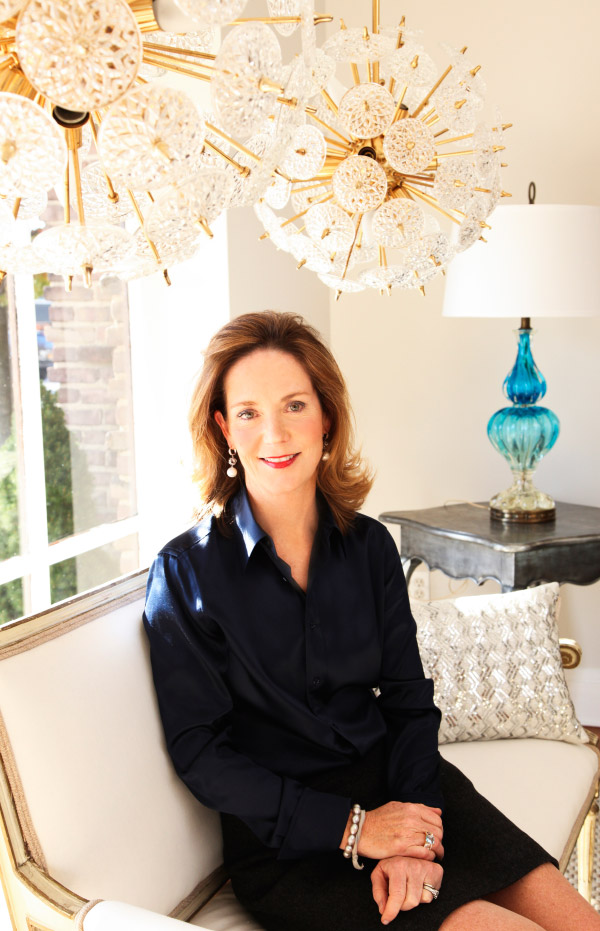 February 19, 2014New York dealer Elizabeth Pash is the newest addition to a burgeoning community of high-end design and antique dealers in Long Island’s quiet Locust Valley. Top: In her new shop, a 19th-century limed-oak Louis XV-style writing table joins a circa-1950 Landstrom chest in espresso lacquer and a 19th-century continental fruitwood side chair.

Betsy Pash’s new Locust Valley shop represents her official independent entrée into the world of brick-and-mortar. The 1,400-square-foot store, tucked inside a 1930s brown-brick building with a mock Tudor top, complements Pash’s space on the 1stdibs floor at the New York Design Center and the online presence she has had since 2007. That’s when she launched her business with a container shipment of 18th- and 19th-century French antiques she’d gathered during a whirlwind trek through the fabled flea markets of Paris.

A longtime devotee of French art and culture, Pash had been struck just a year earlier by the impulse to start an antiques business. On a 2006 trip with her teenage son to the Loire Valley, Paris and Normandy, she had what she calls an “aha moment.” She decided then and there that she “wanted a reason to come back to France often and to make it part of my life.” In an earlier chapter, Pash worked for a decade in public affairs at the Smithsonian, in her hometown of Washington, D.C. “I was privy to wonderful seminars and lectures about antiques and decorative arts, and all that planted a seed in me.”

The new shop is the fruit of that seed. Elizabeth Pash Antiques and Decoration, opened since November, joins a group of high-end design and antiques businesses that are helping to make the town a destination for decorators and homeowners alike. Pash’s own space is a gleaming showcase for her finely honed selection of furnishings and lighting, which has evolved in recent years to include European and American material of the past three centuries, including an especially strong group of freshly lacquered case pieces that reflect a chic and tasteful side of the 1970s. 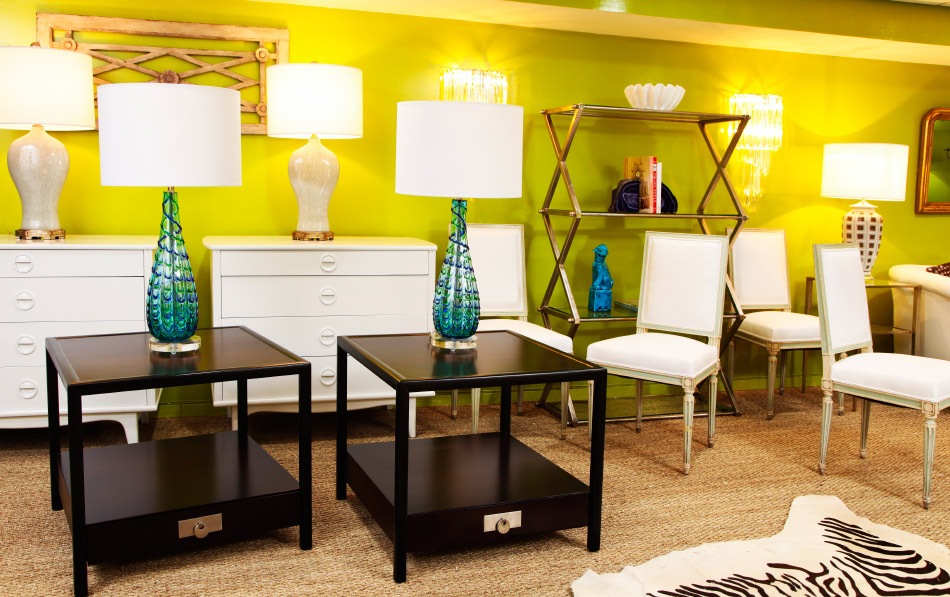 On the shop’s lower level, an acid-green wall sets off an eclectic mix of vintage pieces from the second half of the 20th century. 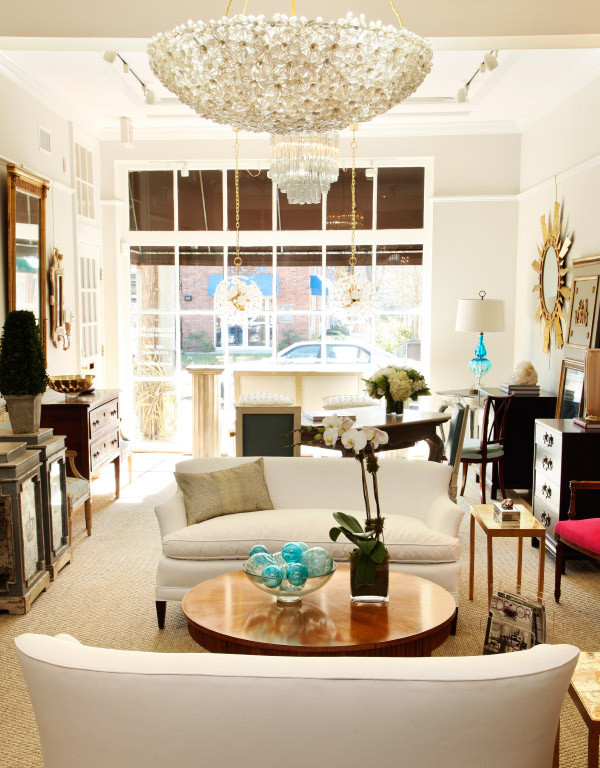 Elsewhere in the shop, a pair of 1930s love seats flanks a round Baker table, circa 1970. Two chandeliers — one made of Lucite daisies, in foreground, and a 1960s Venini crystal fixture — hang overhead.

Pash’s sensibility might be described as traditional with a twist. Take, for instance, a pair of palmette-back French 19th-century chairs upholstered in hot pink velvet. “Those just about sum me up,” Pash says. “I like to take a traditional piece and give it a little glam. I have great respect for the beautiful patina of traditional antiques — you can’t get that with reproductions — but I also like a nod to the twenty-first century.”

Pash’s new shop joins a group of high-end design and antiques businesses that are helping to make Locust Valley, New York, a destination for decorators and homeowners alike.

Today, the new shop sparkles with reflected light from Venini crystal chandeliers and Italian and Swedish glass vases and lamps, all dating to the 1960s, as well as mirrors, ranging from a circa-1790 Directoire trumeau to 1960s and ’70s gilded sunbursts. On the street level of the duplex store, wares of varied provenance peaceably co-exist: There’s a rustic French 19th-century bleached-oak dining table underneath an oversized 1970s chandelier made entirely of Lucite daisies; a pair of circa-1860 Louis XVII-style armchairs upholstered in a nautical-themed contemporary fabric from Pierre Frey; and a blond mid-20th-century piece Pash calls her Mad Men bar cart. 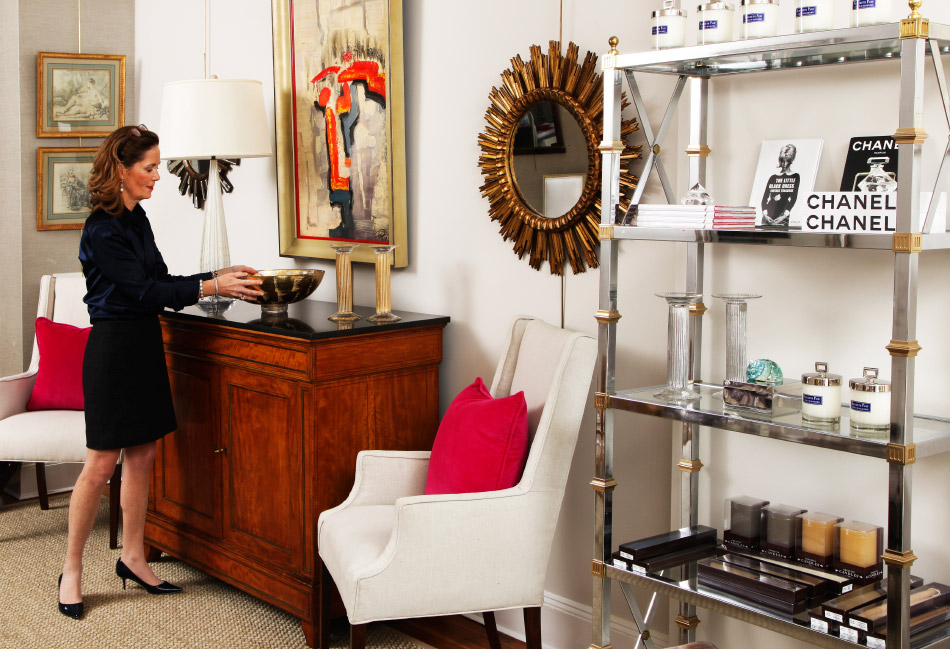 Pash adjusts the accessories atop a 19th-century French walnut buffet. Flanking it are a pair of mid-century highback armchairs, a French giltwood sunburst mirror, circa 1970, and a chrome-and-brass 1960s Jansen-style étagère.

The overall effect is fresh and lighthearted. Pash’s firm grounding in the traditional provides gravitas, while her openness to modernism enlivens the assortment, setting her shop apart from those that tend to be more either-or. “A room full of dark brown wood furniture is heavy and depressing, but I couldn’t live surrounded by all chrome and glass either,” she says. “My goal is to create balanced interiors that are comfortable and elegant, without sacrificing one for the other.” 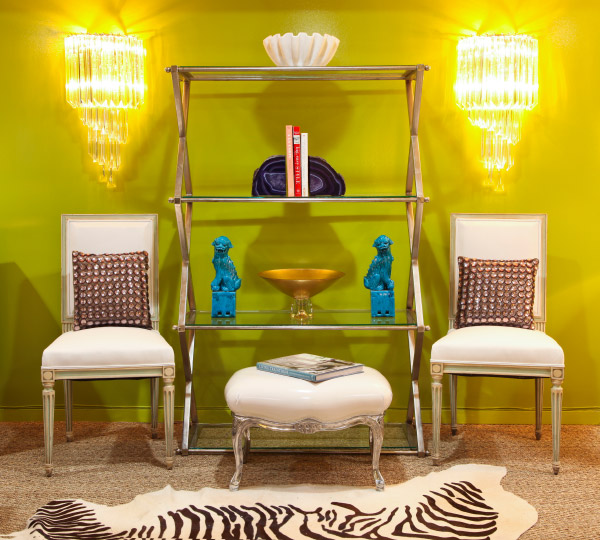 A symmetrical setting at the store includes a metal étagère, circa 1970, and two painted Louis XVI–style 1950s dining chairs with a pair of six-tier Venini crystal sconces, circa 1960, hanging over them.

Pash was first exposed to design by her mother. “She has a flair for decorating and was always making our homes beautiful,” Pash recalls, though as a child she chafed at being dragged into fabric stores. “It was torture, but somehow, by osmosis, I developed this love of interior design.” She studied French at Saint Mary’s College, Notre Dame, in Indiana, and spent a year at the l’Universite Catholique de l’Ouest, in Angers, France, followed by her 10-year stint at the Smithsonian. Later, as a wife and mother in New York City — Pash and her husband, Jeff, a lawyer who serves as general counsel for the National Football League, have four children ranging in age from 13 to 21 — she interned for three years at a Carnegie Hill antiques store, now closed, owned by 1stdibs member Erzsebet Black.

From 2004 to 2007, Pash took decorative arts classes at NYU and Parsons, and studied gilding and faux-painting techniques at the Isabel O’Neil Studio Workshop on East 91st Street. “That education really helped me understand how these beautiful things are made, and gain an appreciation for the work that goes into them,” she says. 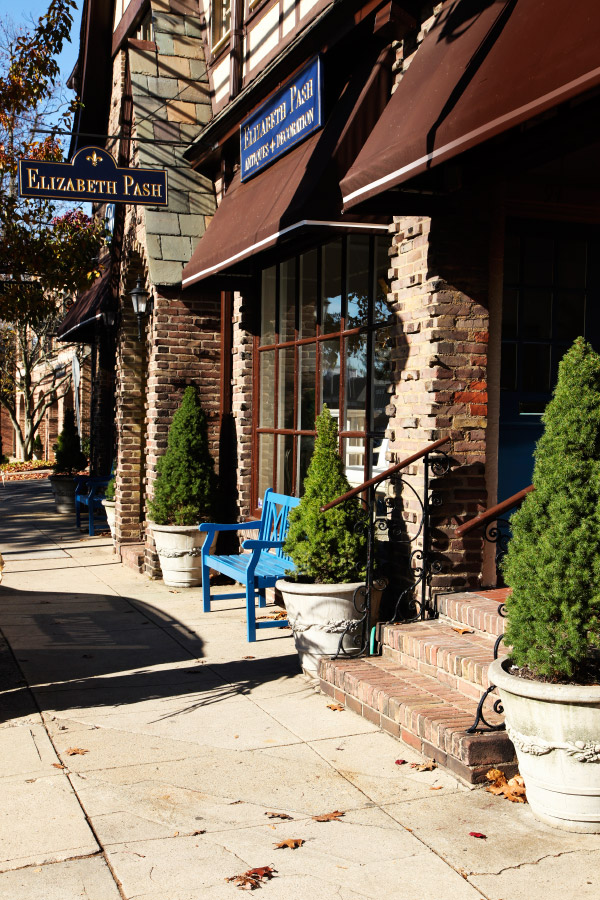 Pash’s new shop sits on Forest Avenue, the main thoroughfare of the pleasant and well-heeled town of Locust Valley.

Then came that first solo trip to Paris in 2007, when Pash began acquiring with an eye toward resale. “I showed up by myself at the markets, which was a little scary, and started getting to know the dealers,” she recalls. She still shops the Paris markets at least once a year; her favorites are Paul Bert and Serpette in the Clignancourt area. Since that first container, she hasn’t looked back. “I started a business in the worst economic downturn in U.S. history,” she says, “but I took baby steps and survived.” Her first outlet was at Center 44, since closed. She moved online to 1stdibs soon after, and then to the 1stdibs showroom at the New York Design Center. Pash did a few out-of-town antiques shows and trunk shows at private homes in East Hampton — “a grass-roots way to get the word out that I had a business,” she says.

Pash and her husband have owned a second home — “a quirky 1930s ranch” — in Locust Valley for about a decade. (Their primary residence is on the Upper East Side.) When designer Meg Braff alerted Pash that the storefront next door to her own in Locust Valley had become available, Pash saw an opportunity and took it. “There was already a cluster of shops there, and I believe there is power in numbers. At the same time, I felt I was bringing something a bit different to the table.”

Pash’s clients now include big-name designers like Bunny Williams, Steven Gambrel, Matthew Patrick Smyth and Nate Berkus, and such retailers as Ralph Lauren and Tory Burch, as well as local designers and homeowners. “My clients can come in and see my whole aesthetic at a glance,” says Pash. “I create homelike vignettes — a modern lamp on a 19th century walnut commode, a seating area with a mirror, light and side table — so people can picture how things might look in their own homes.”

Pash is enjoying the face-to-face interaction that having a store entails. “I’m beginning to form relationships with clients. It’s really fun when they come back and say, ‘Oh, you’ve sold this, and you’ve changed that.’ We look at paint swatches and come up with ideas for their homes.” Even with the splashes of bold color, the shop’s atmosphere remains serene. Pash jokes it’s because she has four children that she’s always striving for calm. The effect is not lost on her clients. “The other day, a woman came in and sat down on a French bergère,” says Pash. “We were talking for a long time, and finally she said, ‘It’s so peaceful in here, I don’t want to leave.’”

Elizabeth Pash shares her thoughts on a few choice pieces.