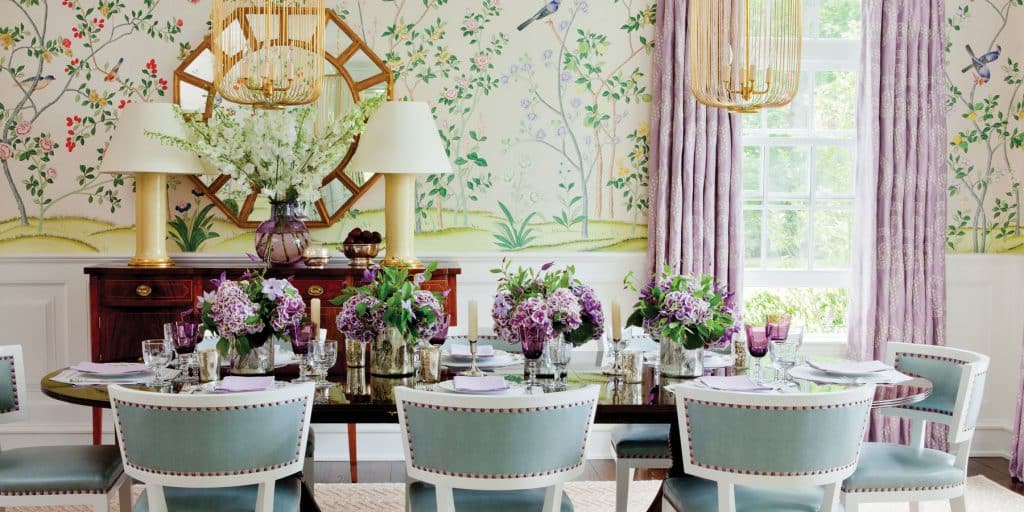 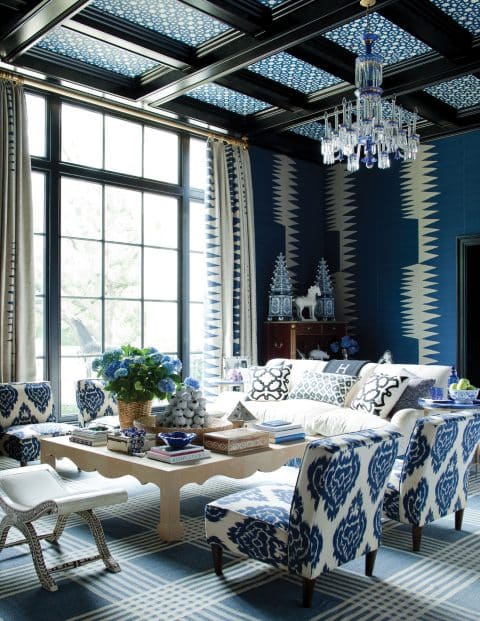 November 25, 2018In her new book, The Power of Pattern: Interiors and Inspiration: A Resource Guide (Rizzoli), design writer Susanna Salk gives readers the inspiration and tools they need to elevate their spaces with bold prints and other graphic treatments, as in this ikat-walled room by designer Kirsten Kelli (photo by Max Kim-Bee). Top: A charming Ashley Whittaker chinoiserie dining room swathed in de Gournay wallpaper (photo by Beatriz da Costa).

I had retreated to my bedroom in my Connecticut home to catch up on some reading. A serene spot overlooking Lake Waramaug, it had crisp white walls, a window seat covered in royal blue velvet and a bed swaddled in solid white cotton sheets. Flipping through a design magazine, I came across a gorgeous bedroom entirely different from my own: Its bold scheme featured a suzani bedspread and was punctuated with leopard-print and ikat pillows that seemed to be in rich dinner-party dialogue with a red-and-white-striped rug, all of which made the space’s surrounding white walls seem like a convivial host. Suddenly, my monotone cocoon felt as aseptic as a hospital room.

Indeed, I had been seeing more and more patterned bedrooms in my recent design travels, each new incarnation as seductive as the last. There was the one right out of an exotic fairy tale, featuring a four-poster bed that designer Lulu Lytle had draped with Soane Britain’s oversized Paisley Parrot fabric in a soft raspberry pink. Then, there was the deliciously disciplined Connecticut bedroom created by Sam Allen, which was defined by the wide graphic stripes of its Ralph Lauren wallpaper, and the David Kleinberg–designed space on Park Avenue in which he deployed Quadrille’s Paradise Garden toile in turquoise and pistachio both on the wall behind the bed and on its coverlet. (Now, that’s a room in which I’d be happy to nap or hold meetings.) And there was Windsor Smith’s bedroom in Los Angeles’s Mandeville Canyon, where she covered the wall and duvet in the same bold cream-and-wheat paisley-esque Rubelli pattern. 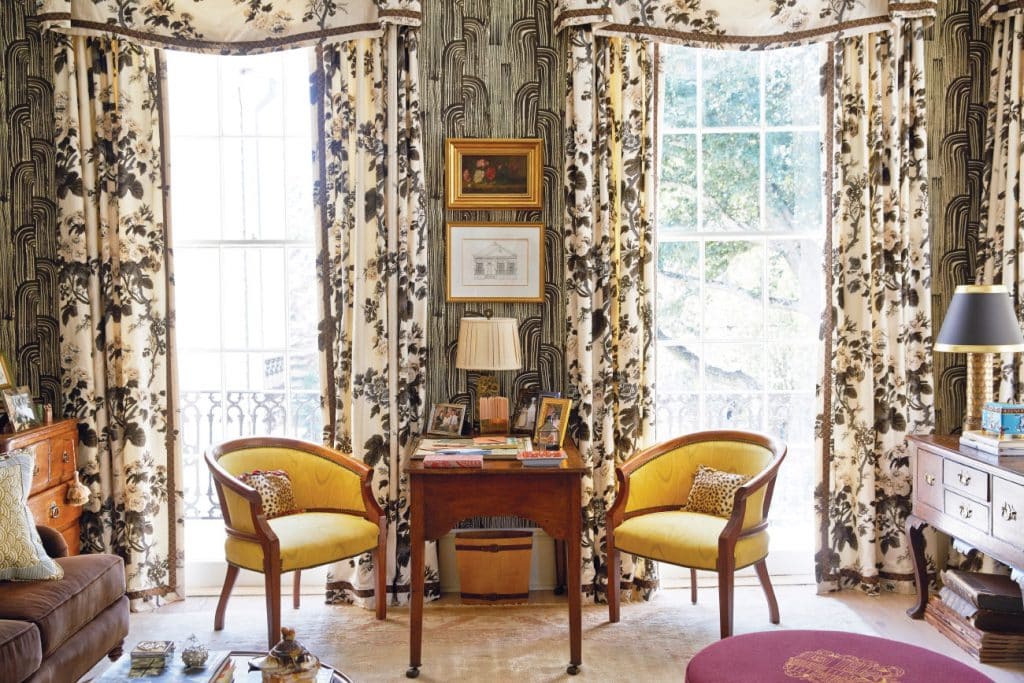 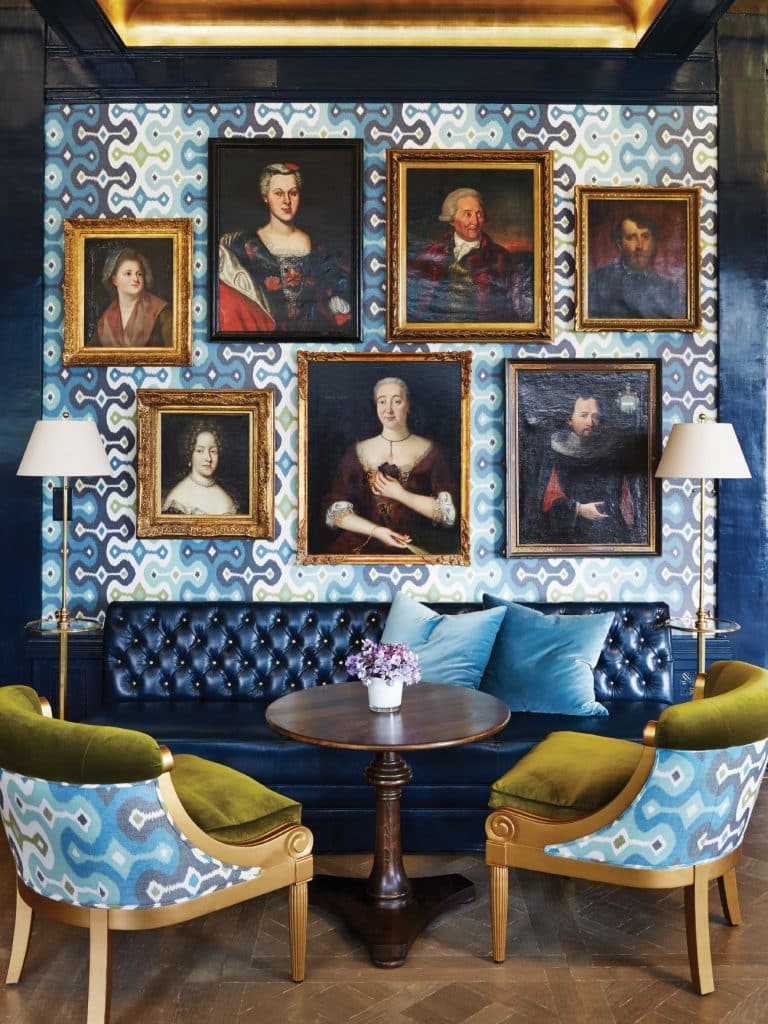 In his 19th-century Swiss chateau, Salk writes, “Martyn Lawrence Bullard uses his Darya Ikat for Schumacher both on the walls and the backs of chairs.” She goes on to describe the effect as being “both antiquated and modern,” thanks to the fabric’s “contemporary and geometric pattern,” as well as Bullard’s hanging of a grouping of old-world portraits. Photo by Francis Amiand 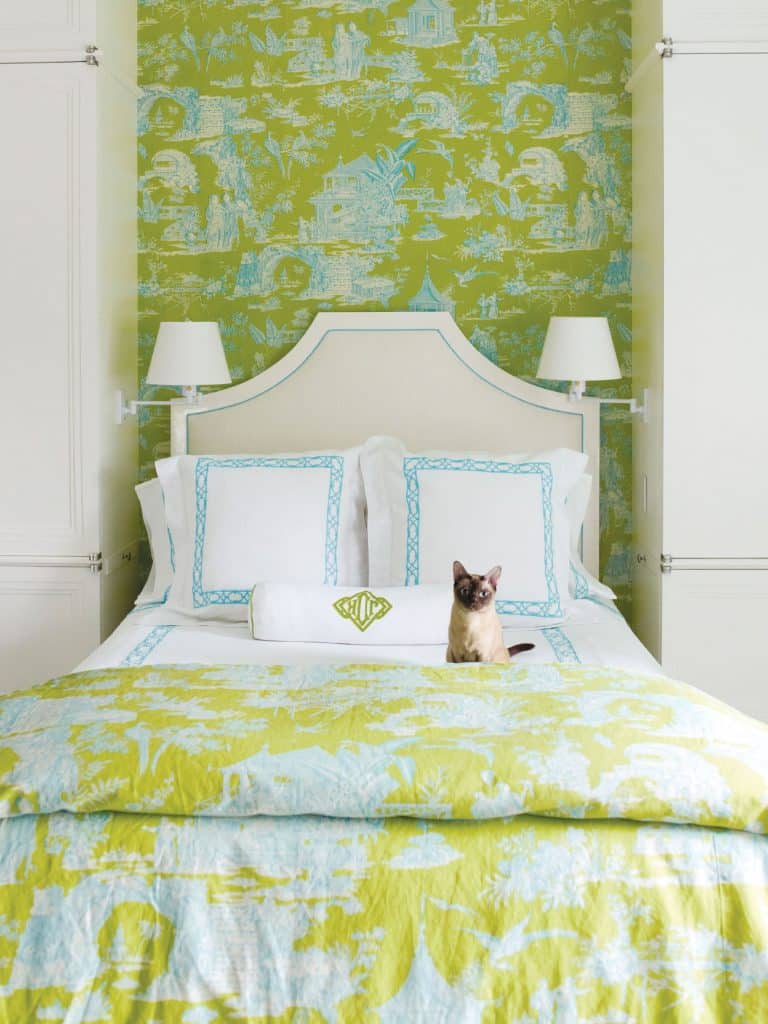 Putting pattern on a wall behind a bed — as designer David Kleinberg did here — “is a fanciful way to accentuate not only where you sleep but the linens you sleep in,” Salk notes. Photo by Eric Piasecki/OTTO 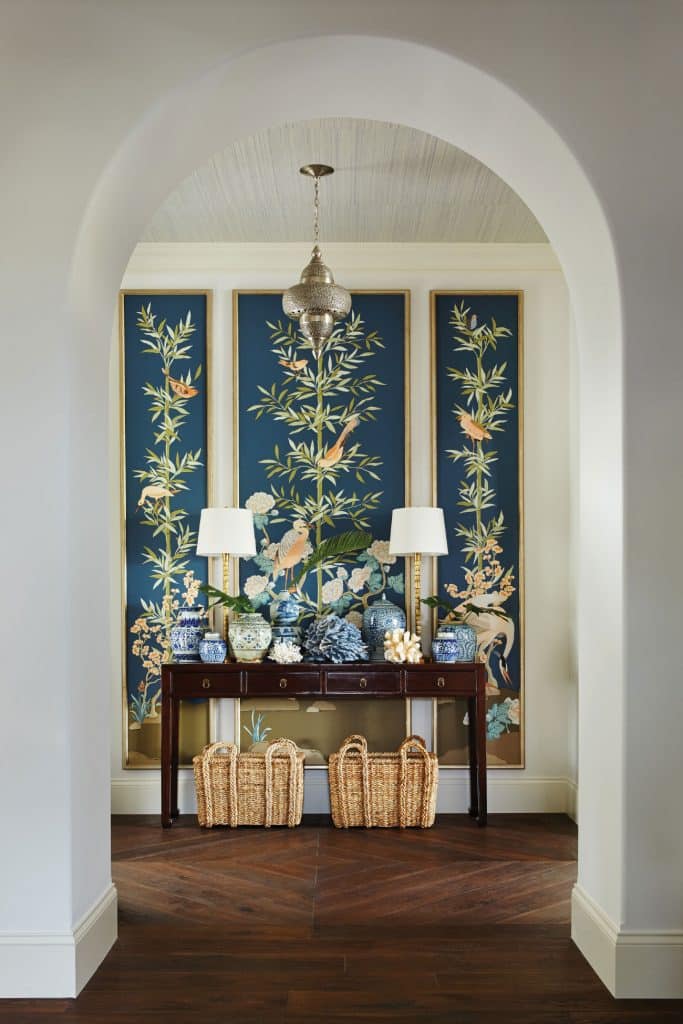 “I am always one for pattern on pattern,” designer Summer Thornton tells Salk, “so I like the way the busyness of the blue-and-white ginger jars plays off the looser pattern of the bamboo and birds. The subtle pattern of the wood floor adds to the effect and draws the eye through the arches.” Photo by Brantley Photography 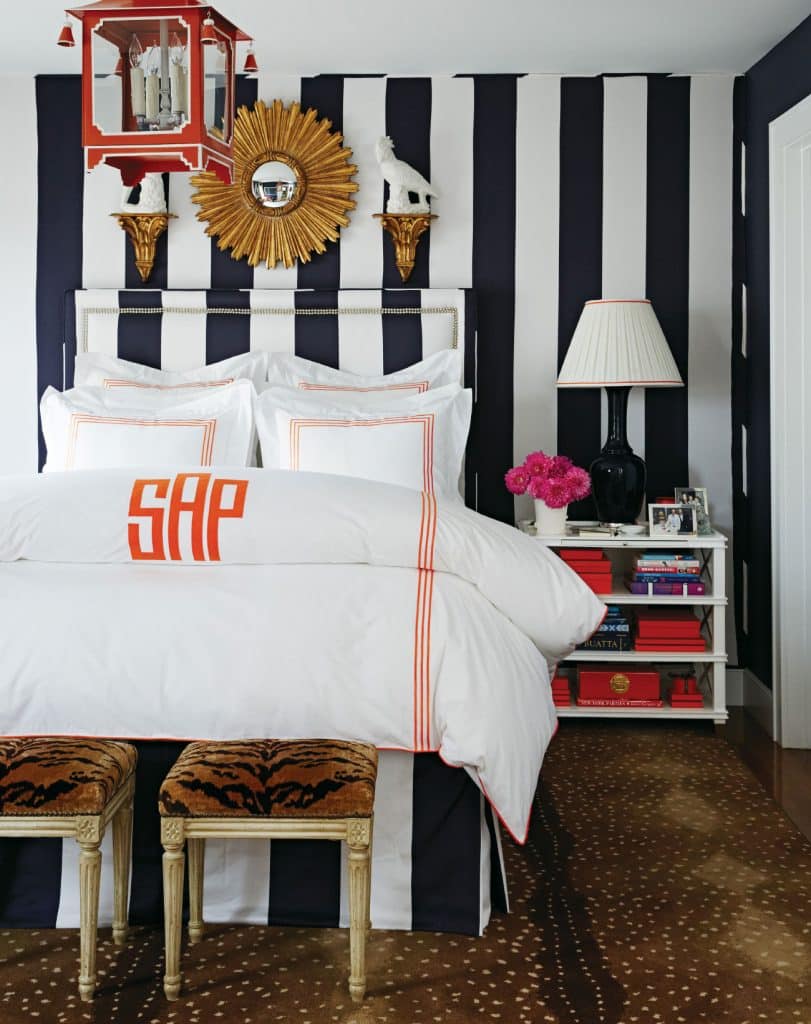 “Bold stripes can be layered just as effectively as florals and shouldn’t be limited to only entry halls and sunporches,” Salk advises, proving her point with a bedroom by interior designer Sam Allen. Photo by David Land 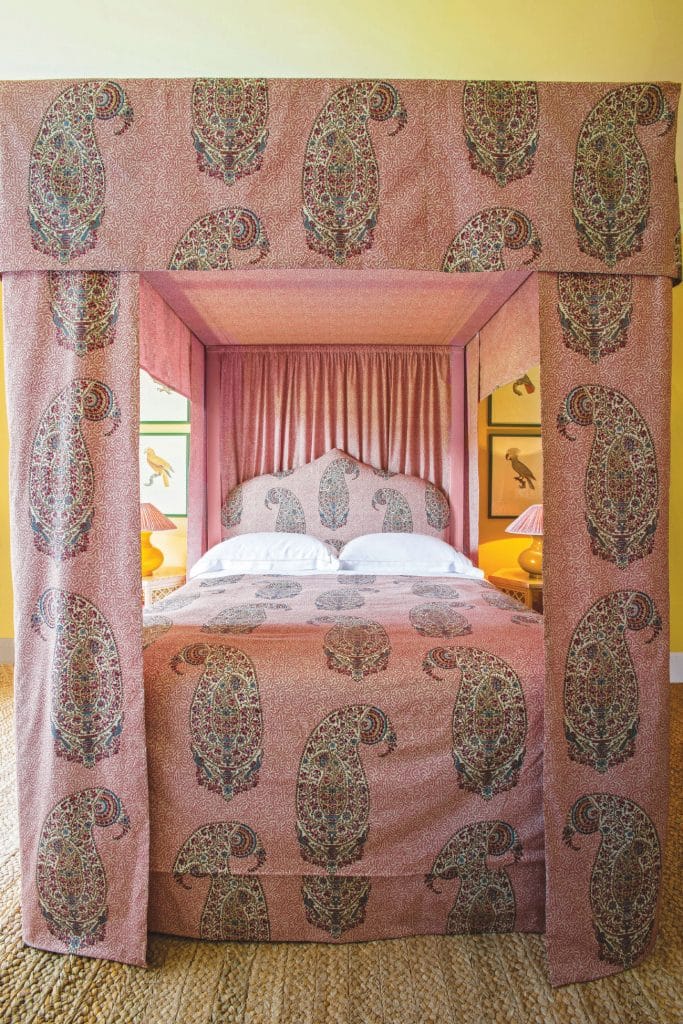 In this exotic fairy tale of a space, “a bedroom becomes a delicious haven of pinks and paisleys and parrots,” Salk writes. Lulu Lytle designed both the room and the paisley fabric, which is part of the Soane Britain line she cofounded with Christopher Hodsoll. Photo courtesy Soane Britain 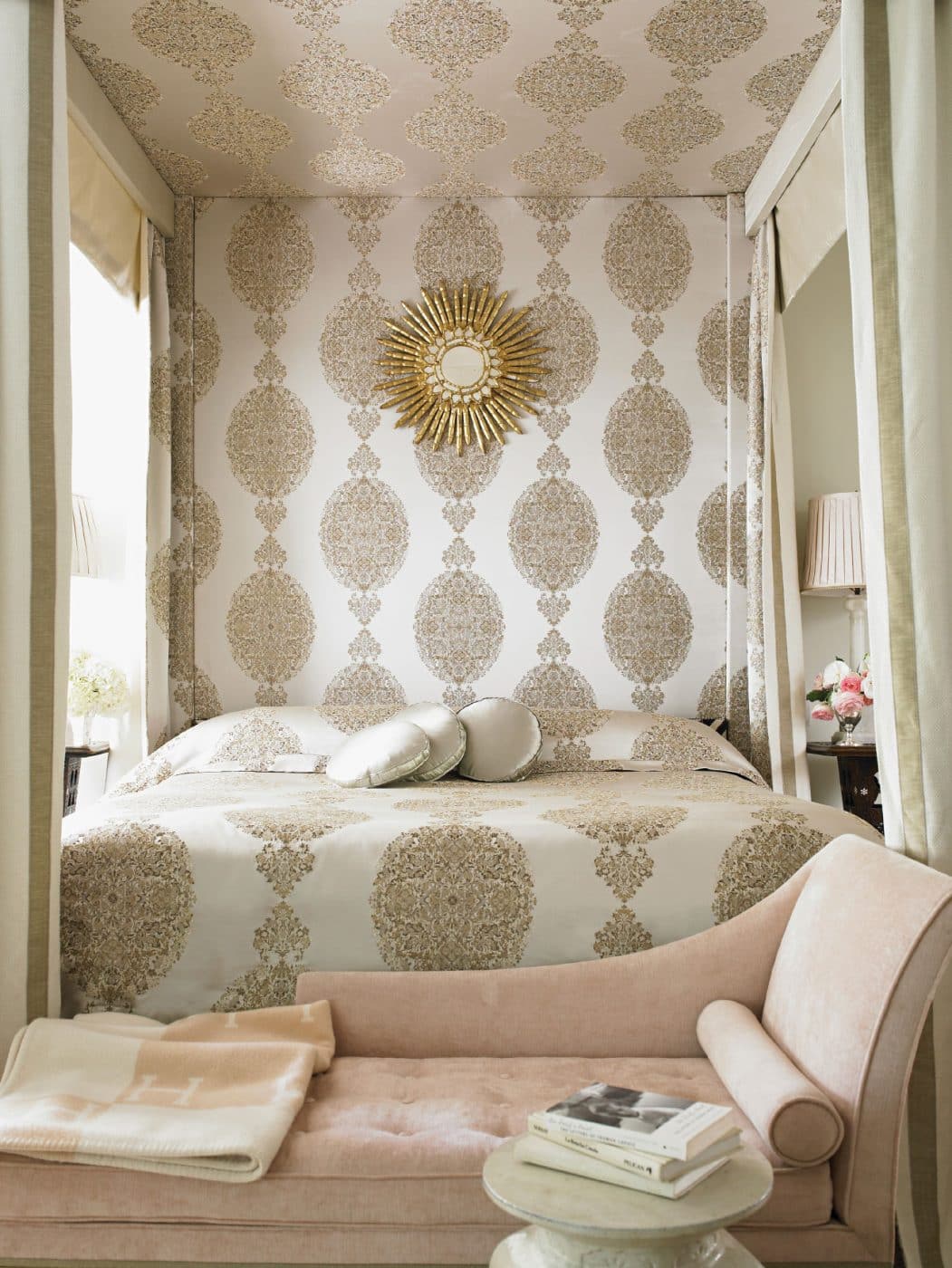 Using pattern in a bedroom, promises Salk, is “a way to create a space for sleeping that feels serene but not somnolent.” This space is by Windsor Smith. Photo by Victoria Pearson

Designer Frank de Biasi,” Salk writes, “turned inexpensive mattress ticking into the blue-and-white stripe that he craved and paired it with…purple trim for a customized wall that feels as deeply personal as his collections.” Photo by Björn Wallander/OTTO

If I’ve learned anything over my years of reporting on design and living with it in my own home, it’s this: When you have a positive emotional reaction to something you see in a magazine, on Instagram or even in a movie, make it a part of your everyday life, no matter on how small a scale or budget. Don’t worry about being accused of plagiarism. Decorating is one of the few creative disciplines whose every expression feels fresh or new, thanks to the infinitely varying contexts that houses — and their owners — provide.

So, I decided to remake my bedroom and join the pattern party. Like a magpie feathering her nest with all the glinting, far-flung bits that had recently been capturing my eye, I found a bedspread with a Moroccan vibe, a striped rug and a few leopard pillows. I did not tell my husband about the impending changes to our bedroom for fear that he would dampen my enthusiasm and convince me I was acting irrationally. I was worried that powerful pattern might be something that should really only be deployed by the professionals, or by the brave dreamers and schemers who know how to break the rules, or play just outside the comfort zone, while still making a room feel correct and comfortable. Certainly, solids exist for a reason. They are as safe and predictable as buttered toast on a Sunday morning.

But then, everything arrived. I folded away my white duvet cover and rolled up my sensible rug and ushered in their more playful replacements. I allowed my eye time to adjust to their effects. Before long, I realized that pattern wasn’t distracting or discombobulating in a bedroom; it actually provided a literal and emotional layering that became both worldly and womblike, a perfect backdrop for sleep. But instead of sleeping, I called my editor. I now had an idea for my next book. The result of that idea, The Power of Pattern: Interiors and Inspiration: A Resource Guide, was recently published by Rizzoli. 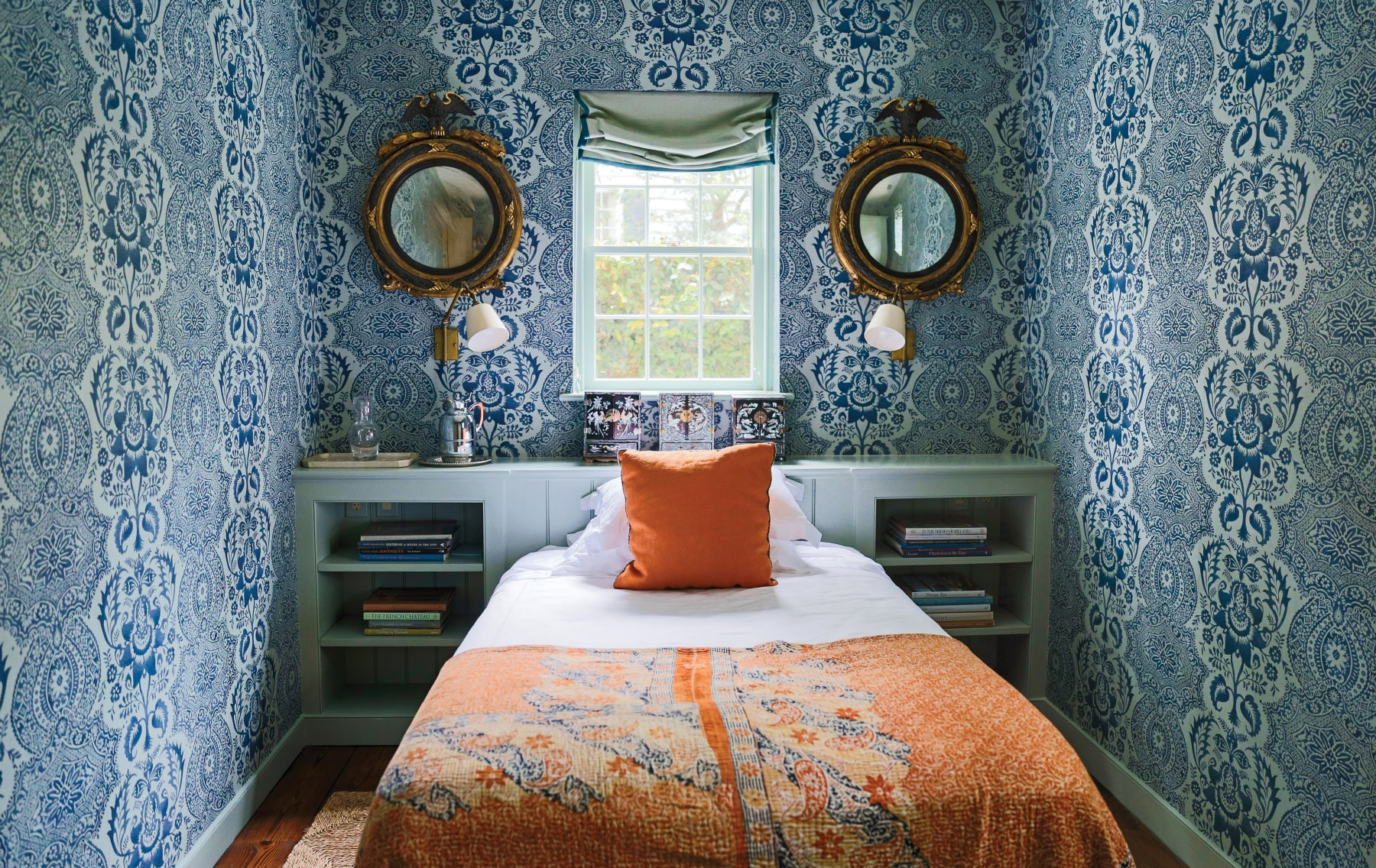 Designer Gil Schafer tells Salk in the book that he knew “the visual punch” of this Cowtan & Tout Delft wallcovering “would more than make up for what the room lacked in size and scale.” He thought it “would be the perfect thing for a tiny bedroom that could benefit from a little drama.” Photo by  Stacey Bewkes 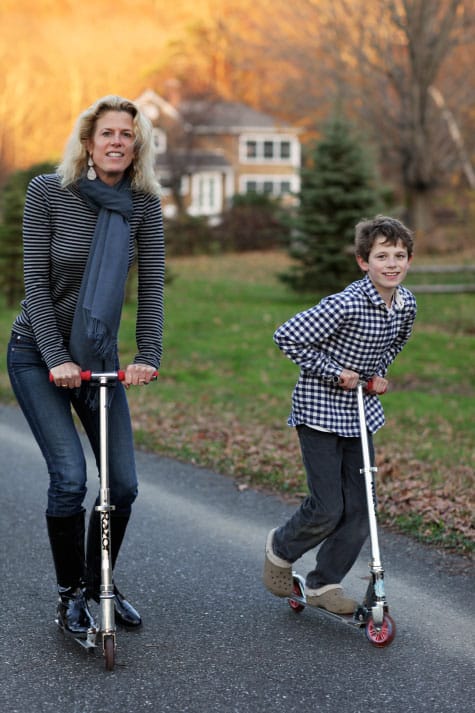 Salk scoots along with her son near her home in northwest Connecticut’s Litchfield County, the redecoration of whose master bedroom inspired her new book. Photo by Costa Picades

I wanted to focus on pattern’s ability to play well with others in all the rooms of a house. So, I featured spaces like the sitting area in designer Martyn Lawrence Bullard’s renovated 19th-century Swiss chateau; there, the pairing of his bohemian Darya wallpaper with original ancestral portraits produces a refreshed room that feels absolutely ready for its present while retaining an appropriate respect for its past. And I included a Summer Thornton foyer that uses a fanciful flora-and-fauna pattern as an accent on a far wall, beckoning guests across the threshold. Then there’s the study where Leontine Linens founder Jane Scott Hodges spontaneously decided, while waiting for a more subdued pattern to do-si-do with drapes dressed in Schumacher’s iconic Pyne Hollyhock, to pair them instead with Kelly Wearstler’s new-classic Crescent wallpaper. The result is as unexpected and as endearing as partnering Fred Astaire with Beyoncé on a dance floor. I wanted to inspire others to make such gutsy and smart choices.

The masters evince playful confidence when deploying pattern. How could my book encourage neophytes to make that leap of faith with images alone? How could I expect someone to swathe a wall or even a pillow in flowers, zigzags, animals or toile when the risks, stress and expense seem daunting? Years ago, I had attempted to upholster loveseats in our living room in an acid-green ikat I saw featured in a magazine. I returned from the showroom with a limp swatch no bigger than a playing card, which I then draped over the armrest and stared at for days, trying to make the connection between the fantastic fantasy and the reality of my budget. I pulled the trigger eventually, but the process felt fraught all along the way.

So, I had another idea for this book: Devote full pages — spreads even! — to the patterns themselves. And when possible, showcase them alongside images of rooms where they’ve been used, whether traditionally or fearlessly. I feel very strongly that the more intimate our experience of a pattern, the more courage we will have to use it.