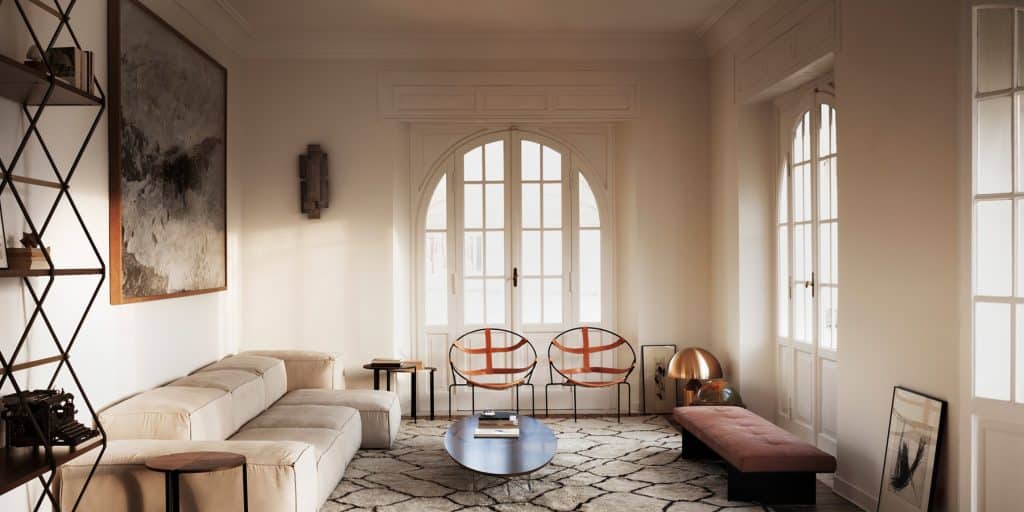 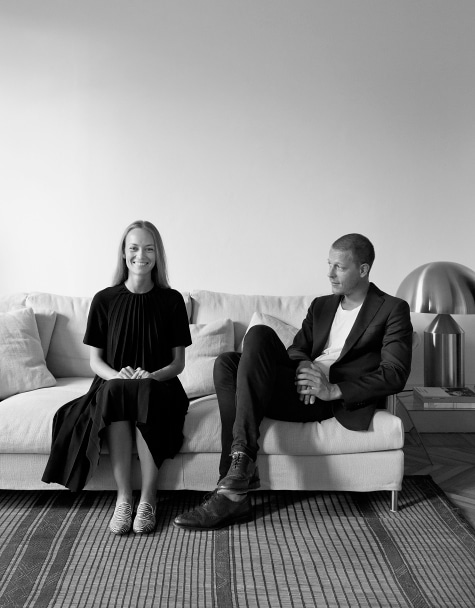 October 7, 2018Fanny Bauer Grung and David Lopez Quincoces, of Quincoces-Dragò & Partners, in their Milan home (portrait by Filippo Bamberghi). Top: Quincoces-Dragò designed the layout of this apartment to fit the needs of a young family. Wishing in addition to maintain the home’s original architectural details, the firm chose a neutral palette for the furniture. Lopez Quincoces designed the side tables and bench. The vintage Flávio de Carvalho chairs are from Be Modern XX Century Design Collection (photo by Alberto Strada).

Halfway through Milan design week this past April, Fanny Bauer Grung was showing signs of fatigue along with satisfaction. She and her husband, David Lopez Quincoces, had just unveiled the very first in-house furniture collection of their interior design firm, Quincoces-Dragò & Partners. The location was the firm’s Six Gallery, in the city’s southwestern Navigli district, and the installation was both atmospheric and wonderfully poetic. It featured 38,000 ears of dried corn suspended from netting stretched several feet above head height, a display conceived in collaboration with their floral designer friend Irene Cuzzaniti. Bauer Grung explains that it took four hours to weave 10 square feet of the ears into place. The whole process required two months. No wonder she was feeling tired.

The collection itself was inspired by the colors and textures of the American desert (thus the dried corn) and was presented alongside the 20th-century vintage furnishings that are staples of the gallery. Bauer Grung compared the heavily veined marble of a low-slung bench to broken rocks. There were also a sculptural chair in walnut, simple linen-framed lanterns and tables with horizontally ribbed bases and two-toned wood-veneer tops. 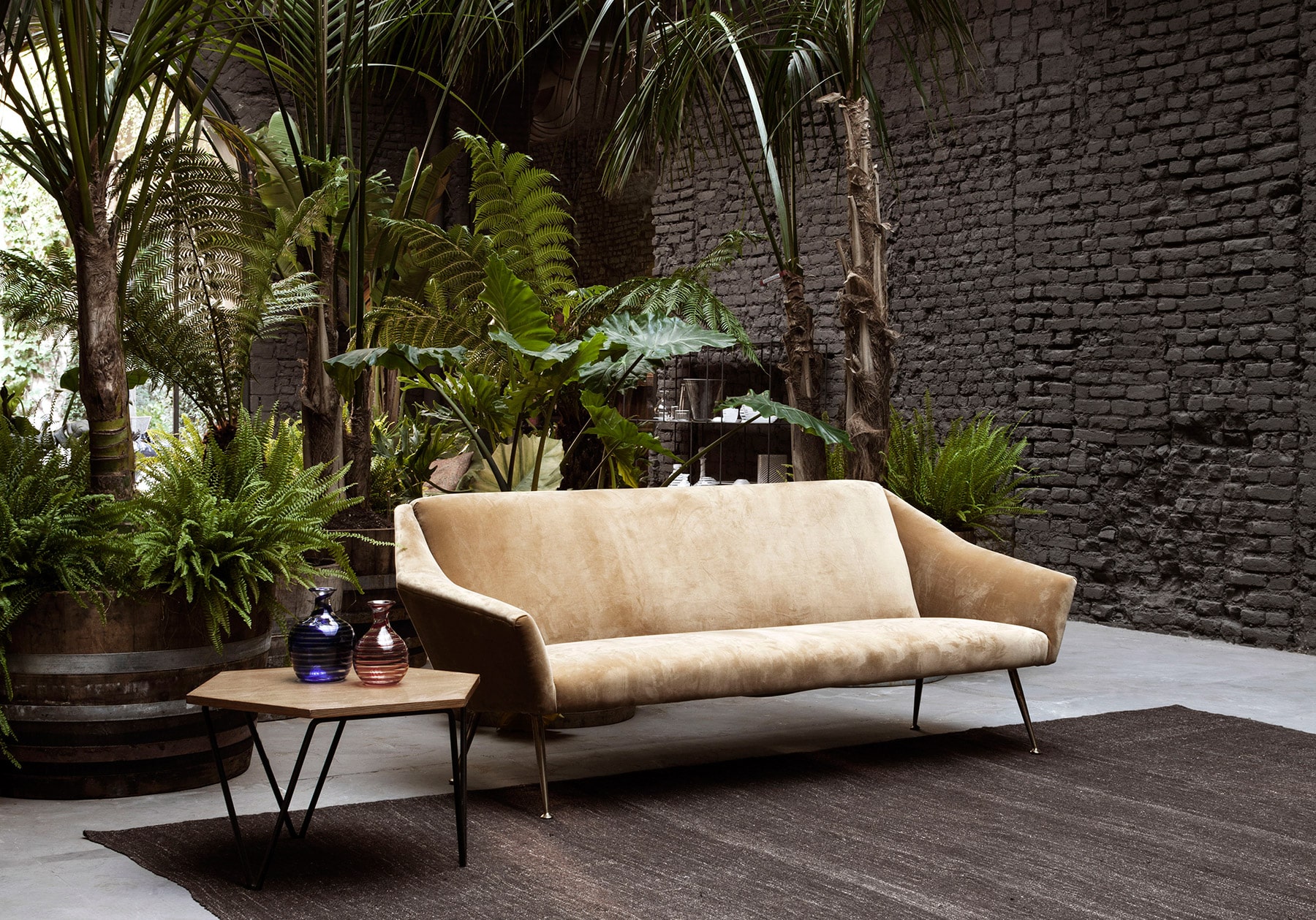 At Quincoces-Dragò & Partners’ Six Gallery, a 1950s Stilnovo sofa is paired with a Giò Ponti side table. Photo by Alberto Strada 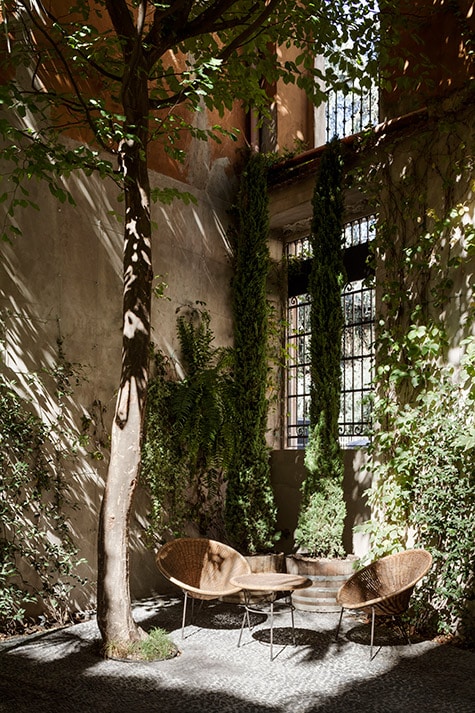 One of the standouts was a simple but elegant folding screen with panels of woven cane — just the kind of piece you would expect from a pair of designers who met in the studio of Italian minimalist Piero Lissoni. Bauer Grung arrived at the studio in 2012, and from her two years  there, she came to understand the importance of precision. “I learned that millimeters matter a lot,” she says. Lopez Quincoces, for his part, was Lissoni’s right hand for 14 years. In 2008, he set up his own firm as a parallel practice to work on independent projects, naming it for his grandparents (Dragò is his mother’s maiden name). Bauer Grung joined him at the end of 2013. When their own Milan flat made the cover of the April/May 2016 issue of AD France, it was partly due to luck: The magazine’s editor-in-chief, Marie Kalt, had chanced upon their work on Instagram. “It has a mix of freshness and a good use of vintage pieces,” she says. “They are part of a new generation of Italian designers who are emerging with a language of their own.”

That language comes through most clearly at Six, which opened in September 2017 and is part of a complex that also houses a bistro, Cuzzaniti’s floral design studio and Quincoces-Dragò’s office. The building, a former 16th-century monastery, today has something of an industrial feel. Pipes and air ducts have been left exposed, and the designers painted the brick walls gray. Their concept for the gallery was that it should be affordable. When I visited on a snowy day in early March, the display included Moroccan rugs from the local firm Altai, a pair of vintage Kaare Klint safari chairs, an anonymous Italian sofa from the 1950s and a couple of Uchiwa sconces designed by Ingo Maurer. The designer pair wanted to create a place in Milan “where everything is not a collector’s item,” Bauer Grung explains. “We do lots of projects for young people and wanted things that are more accessible.” 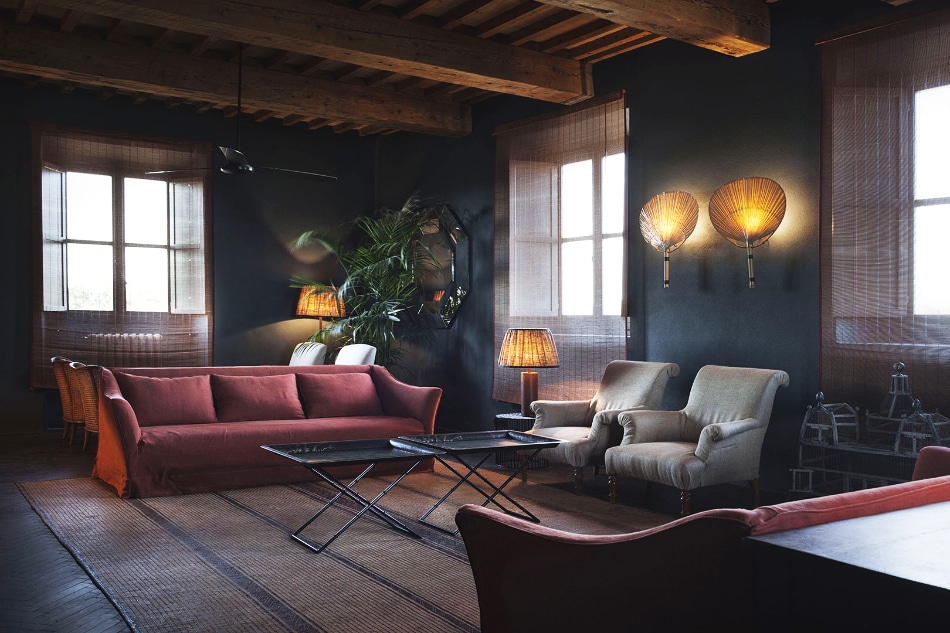 They also have a growing audience for more luxurious work. Among their recent projects is the private members club La Macchia, which is located in a nature reserve directly on the Mediterranean near Grosseto, in Tuscany. Housed in a restored 17th-century mansion, it features a typically atmospheric Quincoces-Dragò interior that brings together moody gray walls, a Mauritanian straw rug, a silk lantern and a hand-painted screen with a leaf motif. Earlier this month saw the unveiling of the new womenswear floor, which they designed for the Rinascente department store in Turin, and currently in the pipeline are a townhouse in Notting Hill, a new-build villa in Maremma, Tuscany, and a restaurant in Milan. With so much going on, it’s hardly surprising that Lopez Quincoces recently decided to suspend his collaboration with Lissoni to concentrate full-time on his and Bauer Grung’s projects. “I’ve been working twenty-four/seven for ten years,” he says. “My body told me to stop.”

“They are part of a new generation of Italian designers who are emerging with a language of their own.” 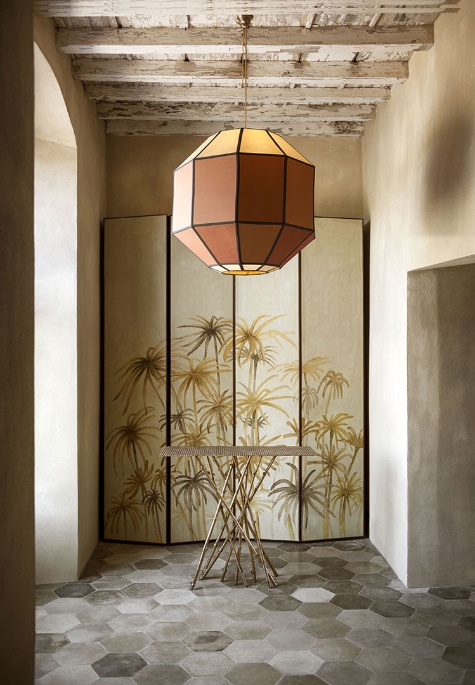 The entrance to La Macchia features a custom screen by Quincoces-Dragò ornamented with drawing by Dalwin Designs, along with a bronze console by Osanna Visconti and a Hive light, which the firm designed with Giulia Puri Negri, the president of La Macchia. Photo by Alberto Strada

Lopez Quincoces  and Bauer Grung come from quite different, though complementary, backgrounds. He was born in Madrid in 1980 to a mechanical engineer father and a mother who is a painter. As a child, he developed a love of motors. “Since I was very young, I worked with my father, repairing cars, repairing boats,” he recalls. “Every weekend, we would go to Valencia or Palma de Mallorca to participate in regattas.” He moved to Milan in 2004 to study interior design at the Politecnico and joined Lissoni’s office immediately after graduation.

Bauer Grung was born in Paris, where her Norwegian father, a diplomat, was stationed. Subsequent postings took the family back to Oslo and then to Rome, where she lived between the ages of 6 and 18. “My father was obsessed with Roman history,” she recalls. “We’d go on these infinite tours of the city on weekends.” Even today, she feels she has more in common with the inhabitants of the Eternal City than with her fellow Norwegians. “Romans enjoy life in the way I do — the food, the chatting with friends and drinking wine and taking it easy.” Not that her resume reflects this: After obtaining a degree in art history from the Courtauld Institute of Art, in London, she studied architecture at both the University of Westminster, in London, and the Accademia di Architettura in Mendrisio, Switzerland.

The couple work in tandem, with Lopez Quincoces generally overseeing the more technical aspects of each project and Bauer Grung responsible for client development and public relations. In person, she seems more earnest; his responses are often teasing and playful. When I ask about how they work together, he answers, “Very badly. It’s a continuous fight.” “That’s not true,” protests Bauer Grung. “Yes, it is,” he insists. “A disaster!” Nothing, apparently, could be further from the truth. “Together, they are worth much more than the sum of each individually,” declares Francesco Perillo, vice president of business development for the Dr Smood Group, a healthy-fast-food chain. “Their dynamic is one of support, constructive challenge, of wanting to push the bar higher every day.” 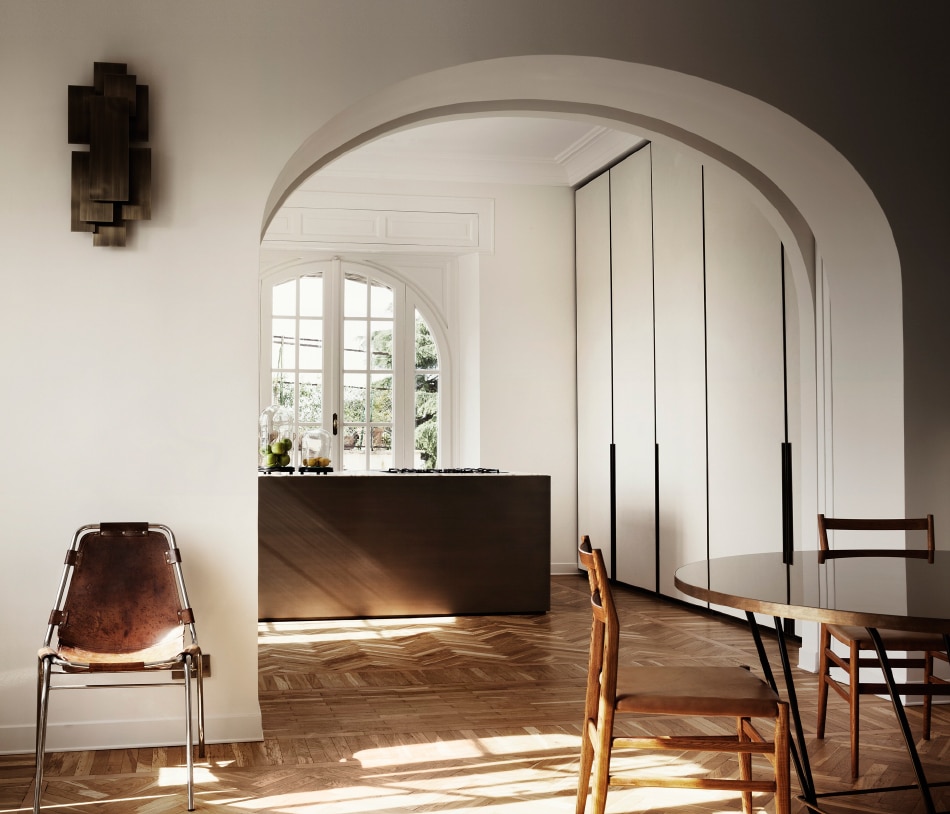 In the kitchen and dining area of a Rome residence, a Dimore Studio table is surrounded by Giò Ponti Leggera chairs. The space also includes a Les Arcs chair by Charlotte Perriand. Photo by Alberto Strada

The two certainly seem to be on the same wavelength aesthetically. Client Ilaria Bernardini, the owner of the Notting Hill townhouse, describes their style as “super cool, sophisticated and very warm, despite a certain minimalism.” Among their inspirations they cite artists like Eduardo Chillida and Donald Judd, as well as the Catalan firm RCR Arquitectes, winner of the 2017 Pritzker Prize. They favor neutral hues and natural materials and avow a deep respect for existing architectural features. “A room doesn’t need to be overcrowded or overdramatic,” says Bauer Grung. Adds her husband: “You could always add more to our spaces.” In the bedroom and kitchen of their own apartment, a Romboidale bookcase by their friend Pietro Russo, a Chinese silk rug and a pair of canary yellow Ico Parisi armchairs play off charcoal gray walls.

Decidedly hot and hip, this designer couple nevertheless resolutely shuns one thing: following trends. “We prefer to detach ourselves from what’s fashionable and to work according to other principles,” Lopez Quincoces says. This approach is already evident in their furniture debut. “You always need to go one step farther and to think about an object that could work today, that could work in twenty years,” he says. “An object for life.” 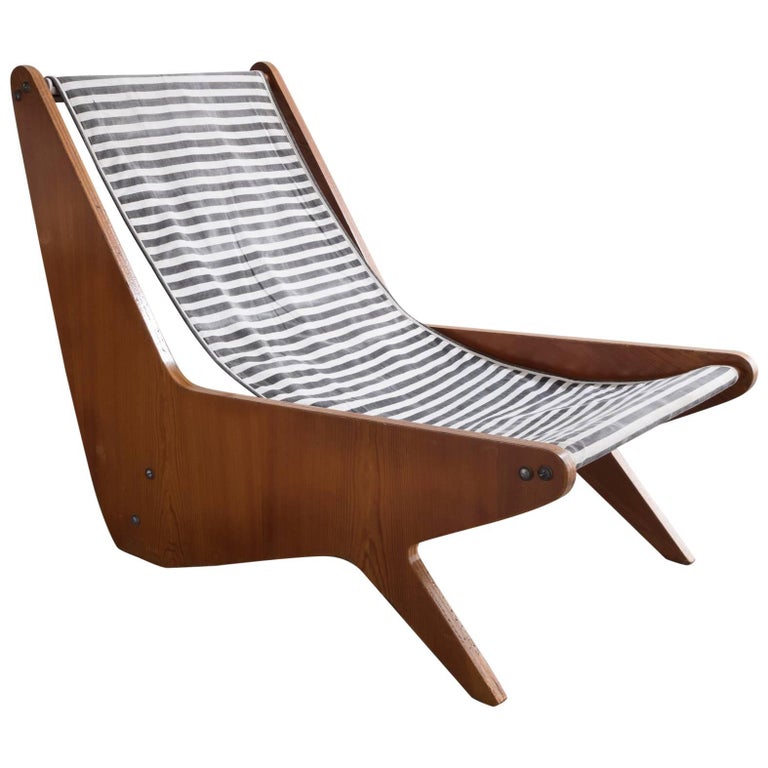 “We love Brazilian designers, plywood and stripes, so this piece is perfect.” 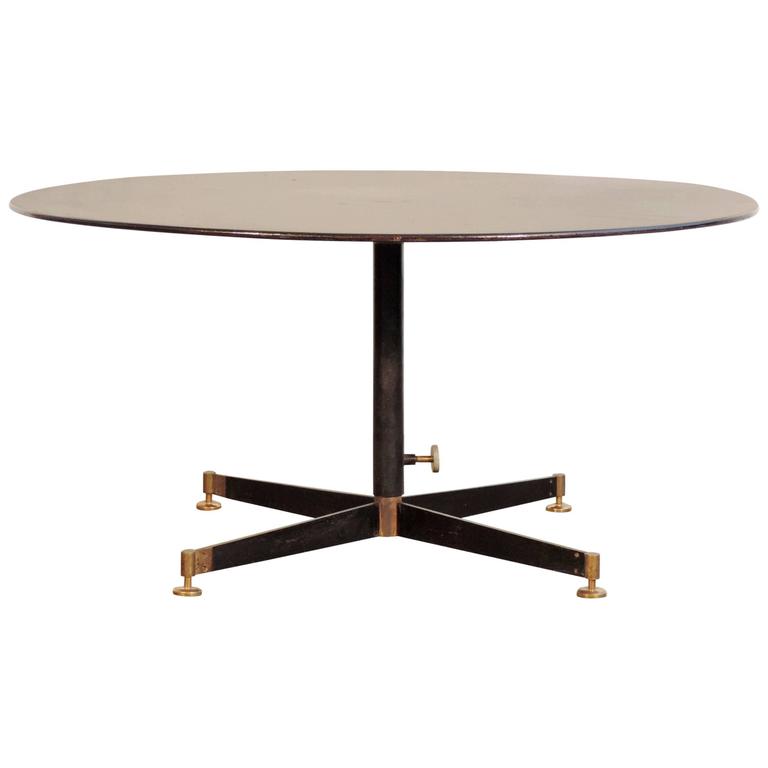 “Gardella was a brilliant designer with a wonderful Milanese aesthetic. This table is so simple yet stunning. With its adjustable height, it works with anything.” 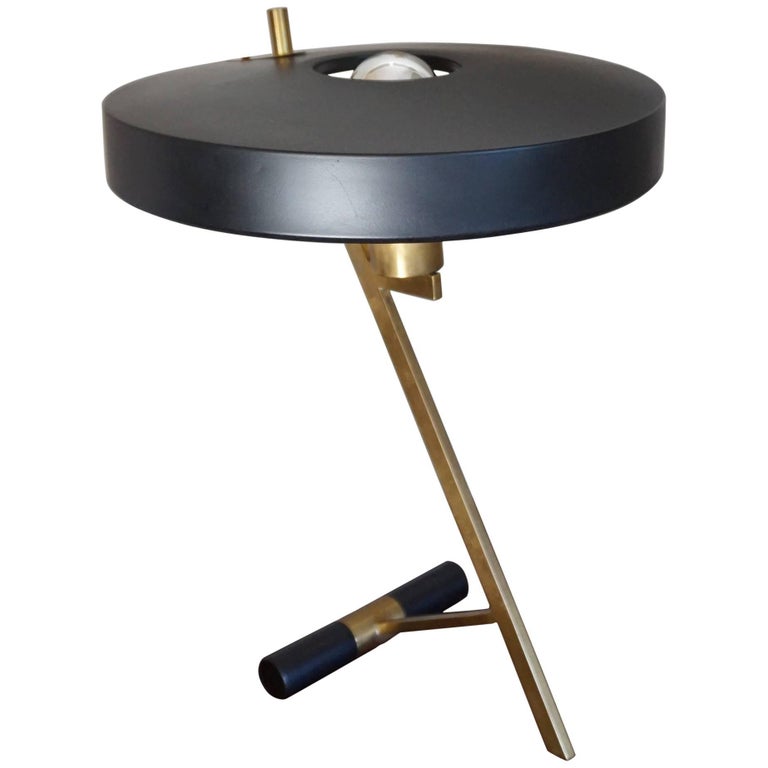 “This lamp is so versatile it works anywhere, from a desk to a bedside table. It will always stay relevant.” 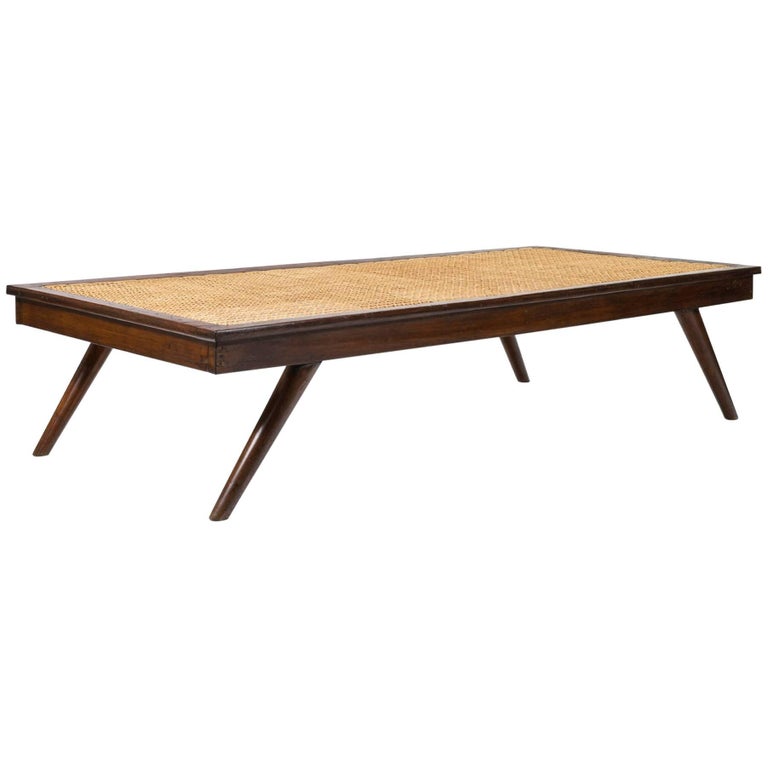 “Anything that is aged cane adds warmth to a room. This is such a simple but timeless piece — we would put it in every project if we could! 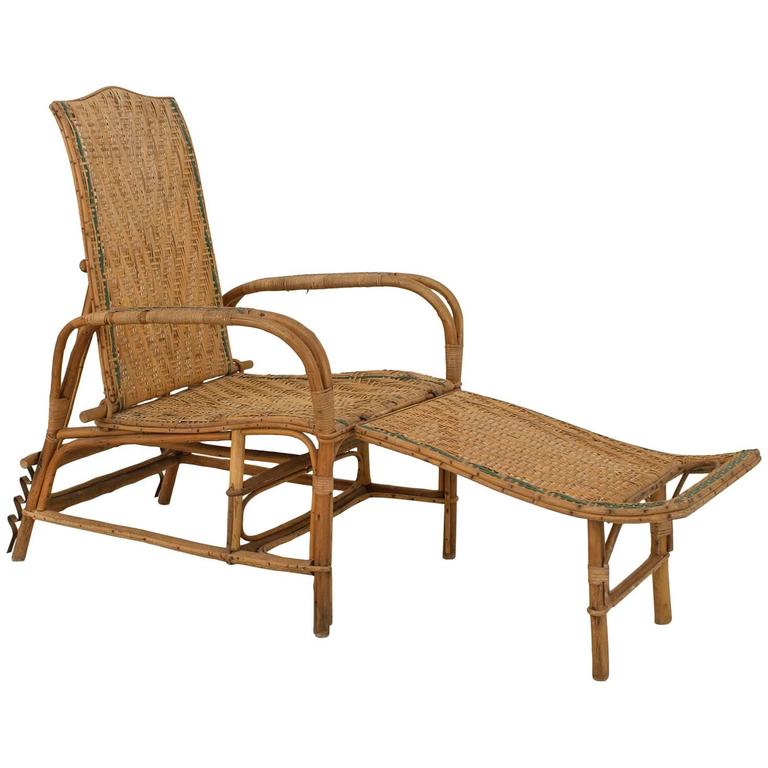 “Wicker is another great element for adding character and warmth. I’d love to have one of these myself, in a living room with a reading lamp or in a countryside home.” 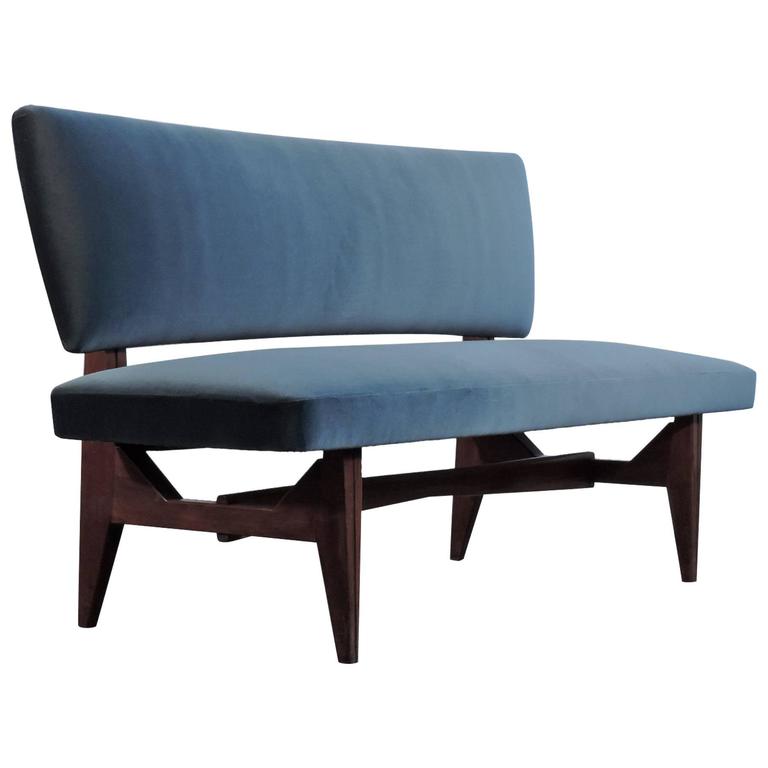 “Velvet is always a favorite. This settee is particularly elegant in this wonderful blue!” 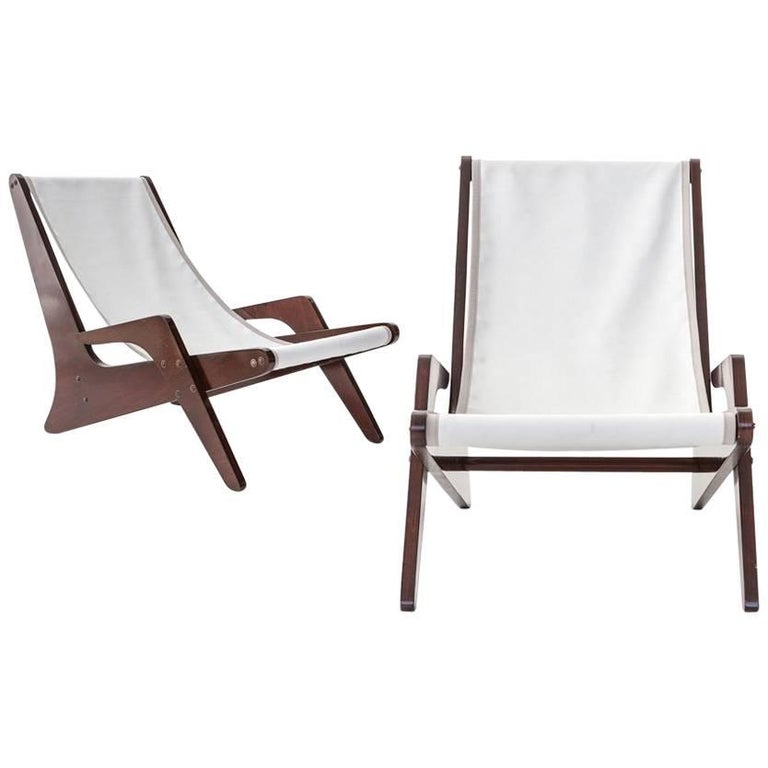 “The engineering of these chairs is so simple yet so beautiful! Again, Brazilian simplicity strikes us as something natural yet sophisticated.” 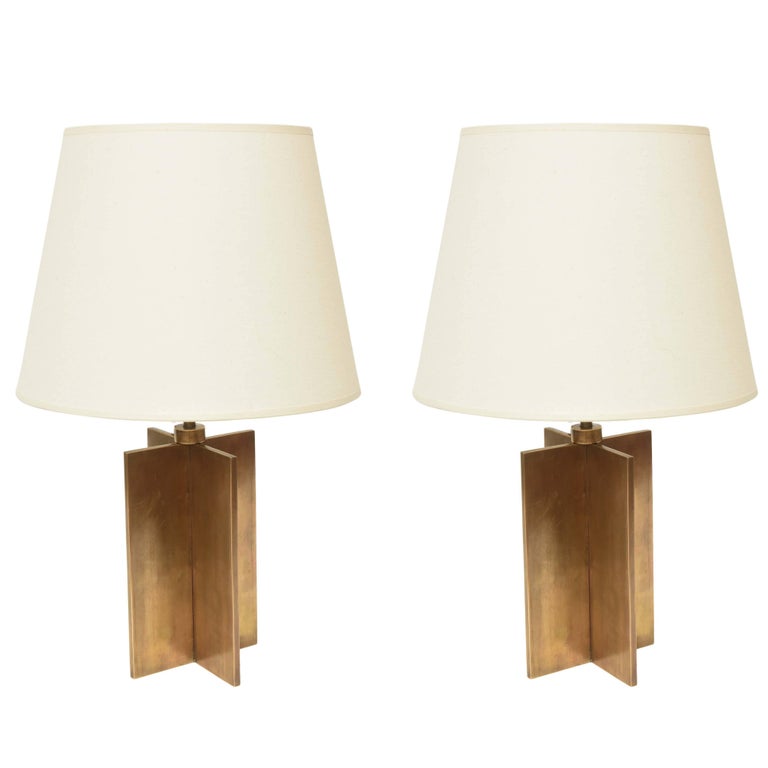 “Jean-Michel Frank is timeless! This really shows in these lamps, which would add warmth to any interior.” 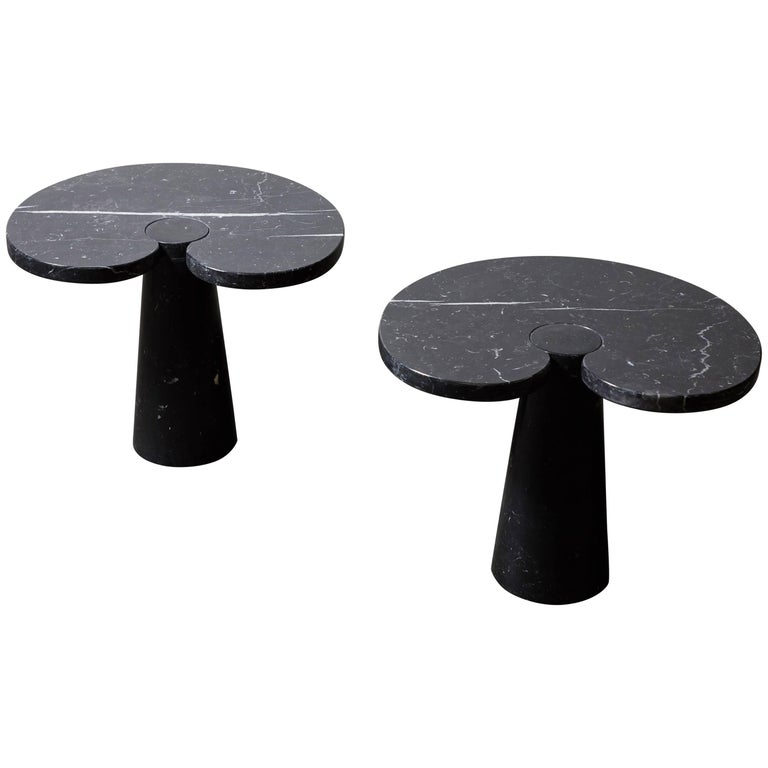 “Again, the engineering is great, as is the manipulation of the material.” 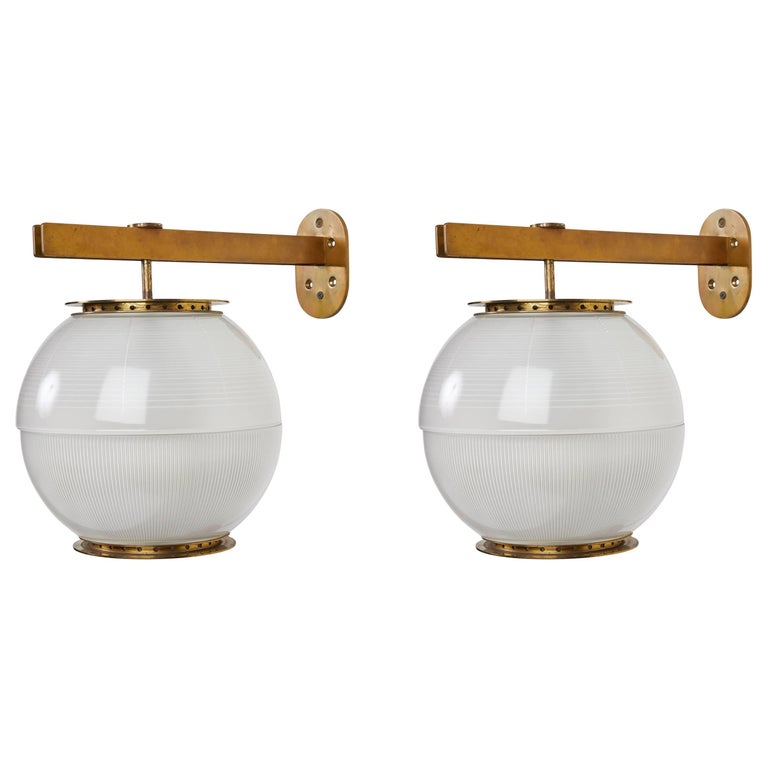 “We love the ultra-Milanese aesthetic of these lamps, as well as the way they diffuse light — so warm and welcoming, even though the design is quite austere.”