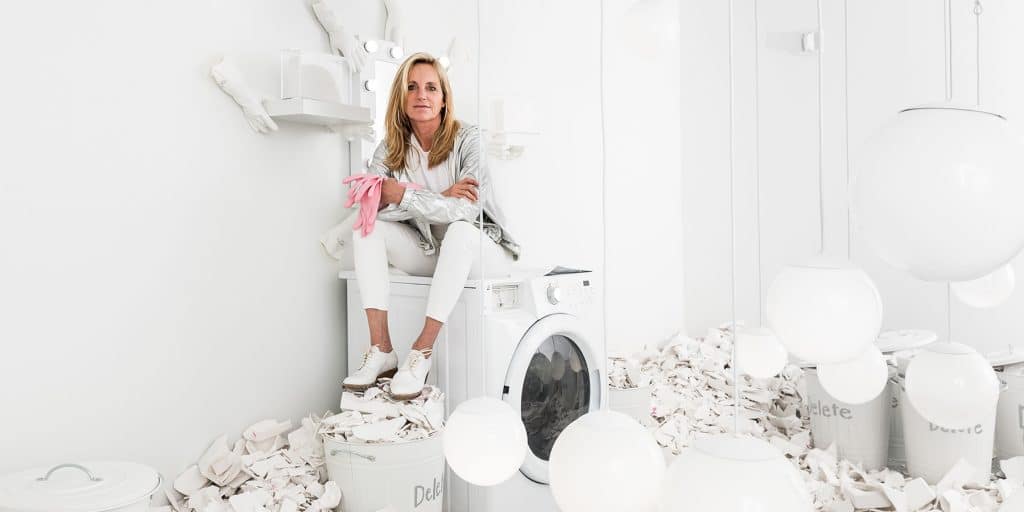 June 17, 2018Ivory Soap, 2018, and FLIRL, 2018, feature in Rachel Lee Hovnanian’s latest exhibition, “Pure,” Part III of her Women’s Trilogy Project, at Leila Heller Gallery. Top: The artist sits among her mixed-media works at the gallery. All photos by Lesley Unruh, unless otherwise noted

The same might be said of their creator, a slim, blonde, blue-eyed woman for whom the series is deeply personal, confronting her father’s alcoholism and her upbringing in Texas amid intense social pressure to be what she terms “perfect”: perfectly attractive, perfectly groomed, perfectly accomplished — and perfectly virginal.

“Happy Hour,” which closed May 31, was the second installment of Hovnanian’s Women’s Trilogy Project at Leila Heller Gallery in New York’s Chelsea. The first, “NDD Immersion Room,” exhibited under the male pseudonym Ray Lee (Hovnanian’s college nickname and maiden name), was an installation about so-called nature deficit disorder; it re-created a forest, complete with crunching leaves and pine trees, that visitors could enter only after surrendering their mobile phones. In the just-opened third part, “Pure,” which runs through July 20, Hovnanian uses Ivory soap as a motif, making it a metaphor for the pressure society exerts on women, in particular, to be perfect. The trilogy marks the first time a New York gallery has given a single artist three consecutive shows over a six-month period.

A few weeks before the opening of “Pure,” Hovnanian is at the gallery, sitting under a clock in “Happy Hour” programmed to hit 5 p.m. — cocktail time — every 60 minutes and explaining how America’s alcohol-soaked culture can lead children of drinkers down a path of perfectionism in an effort to right their world. The centerpiece of “Pure” is a monumental marble sculpture of a bar of Ivory, “lying in state,” as the artist puts it. “Ivory soap is the American ideal of clean and perfect and the girl next door,” she says. “It’s that idea that we have to be flawless all the time, which has become an addiction to pursuing something we can never attain.” 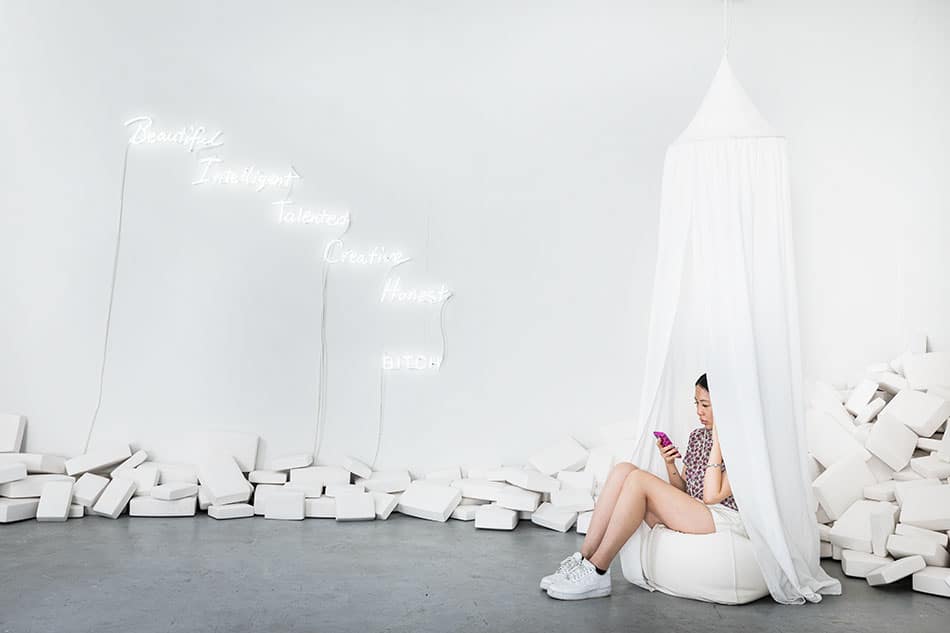 In a symbolic destruction of that oppressive ideal, Hovnanian is inviting visitors to pick up a mallet and smash some 2,000 smaller versions of the Ivory sculpture fabricated in plaster and soap. “Maybe you’re not tall enough. Maybe you don’t like your curly hair,” she says. “Everyone has something they think is ‘not good enough.’ ”

The exhibition also includes “meditation wombs” where visitors are encouraged to listen to calming recordings with headphones and “think clearly about this idea in a restorative way,” as well as new pieces in Hovnanian’s “Acronym Neons” series. The theme of this group is deleting negative thoughts, with one piece reading “Imperfection Is Perfection IIP.”

Hovnanian has been working on the Women’s Trilogy Project for three years. The genesis was a photograph she found of herself at her mother’s home in Houston. The image, a school portrait, shows an unsmiling, surprisingly serious-looking child of 9 or 10, with straight hair short enough and clothes plain enough to give her an almost androgynous appearance.

“I looked myself in the eyes, in that stare, and I thought, ‘What was going on with me at that point?’ ” she recalls. A 2014 show at the gallery had contained works dealing with people’s addiction to smart phones, including a video depicting couples in bed but consumed with their devices. The old photograph led her to consider another addiction: her late father’s alcoholism. His substance abuse during her childhood spiraled into rage at times and had a lasting and profound effect on his daughter.

In response, she made the first work in what became the “Happy Hours” series. Hovnanian collaged multiple copies of the image of herself and overpainted them with layers of blues and grays, so that they appear faint and are easily missed. The work also includes simple drawings of a bottle, a house, a car. Alluding to whiskey, large text, written in neat penmanship on primary-school-style lines, reads “Johnny Walker came to visit,” with the exclamation “GET THE FUCK OUT” scrawled on top.

“Unfortunately, my father was a very different person when Johnnie came to visit,” Hovnanian says. “When he was drinking, it wasn’t a good time. My mother would pack us up in the car. That’s why I have the image of a car.” 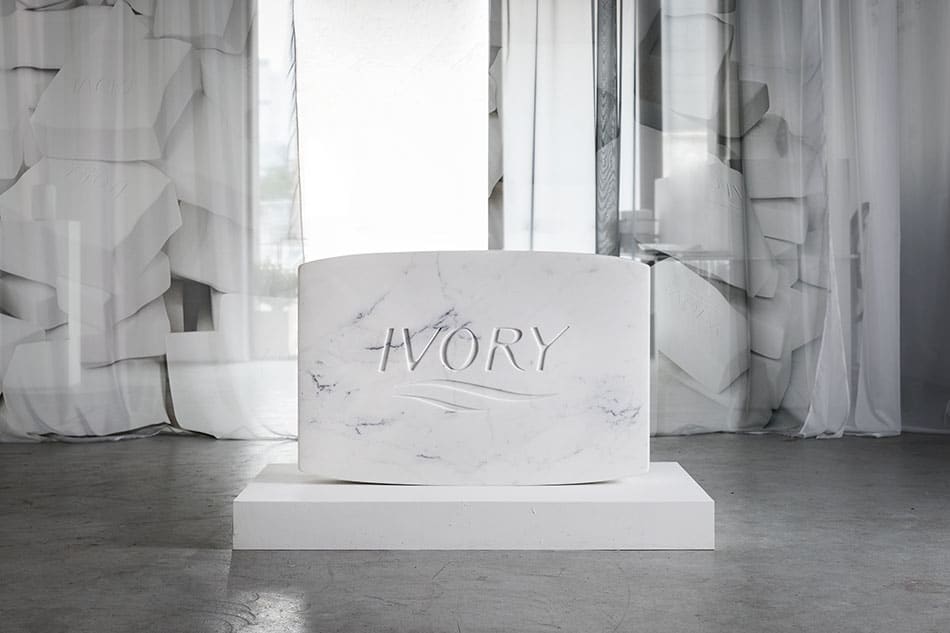 The centerpiece of Hovnanian’s latest show, “Pure,” Part III of the Women’s Trilogy Project, at Leila Heller Gallery, is an enormous bar of Ivory soap carved out of marble. 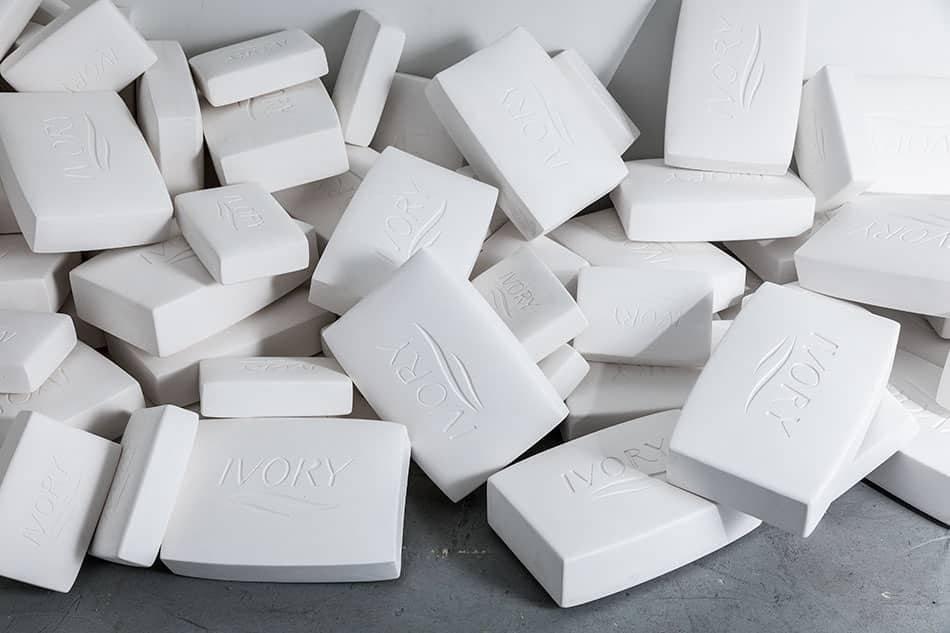 Gallery goers are encouraged to participate in the work by writing a negative thought on a plaster bar of soap and smashing it with a hammer. 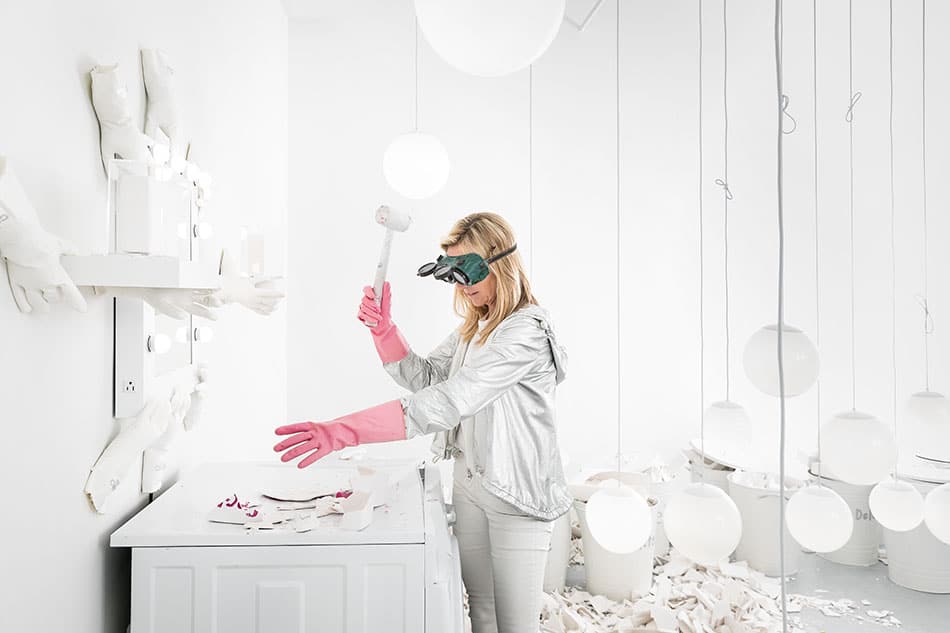 Here, the artist smashes her own plaster bar of soap. 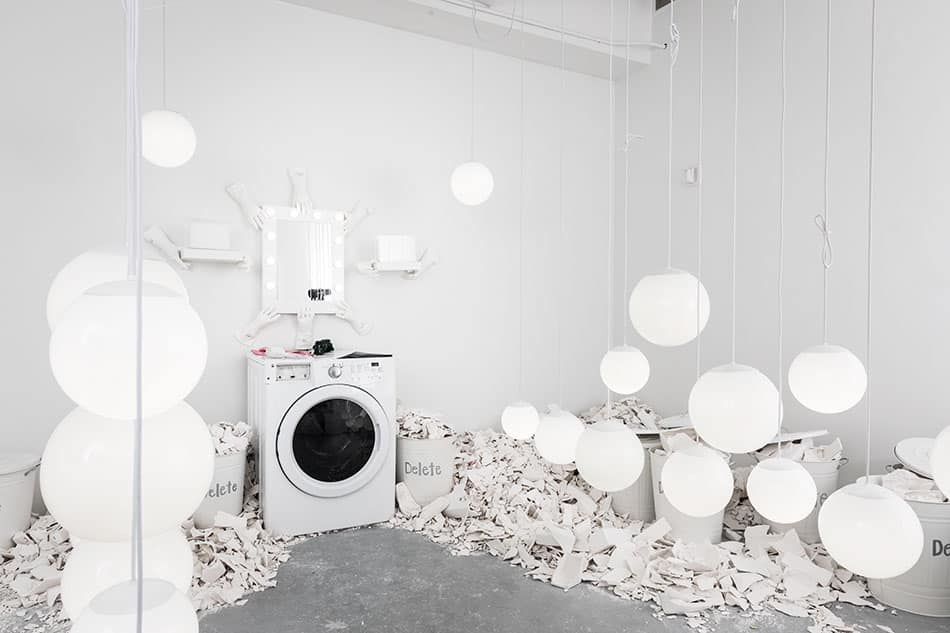 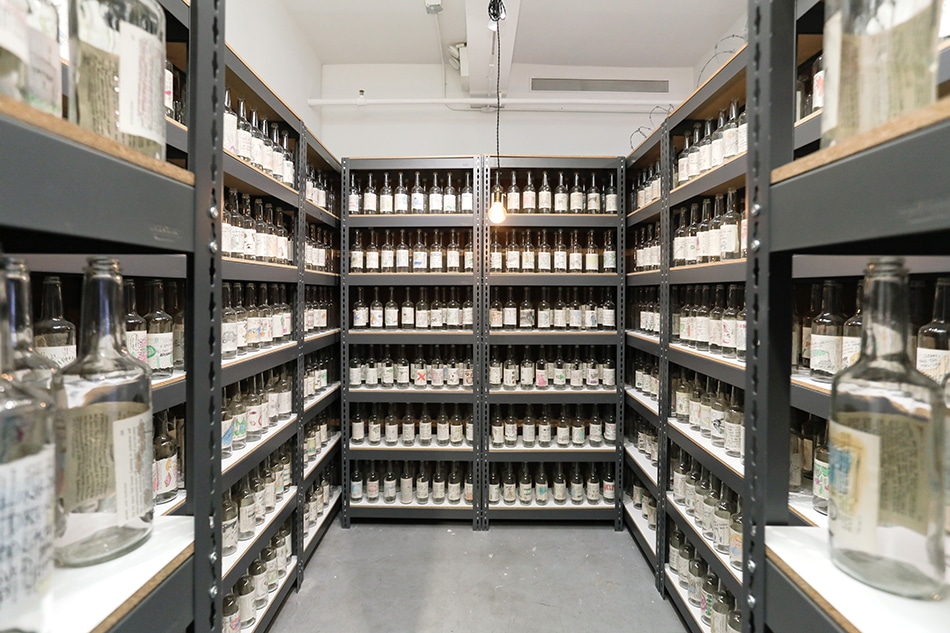 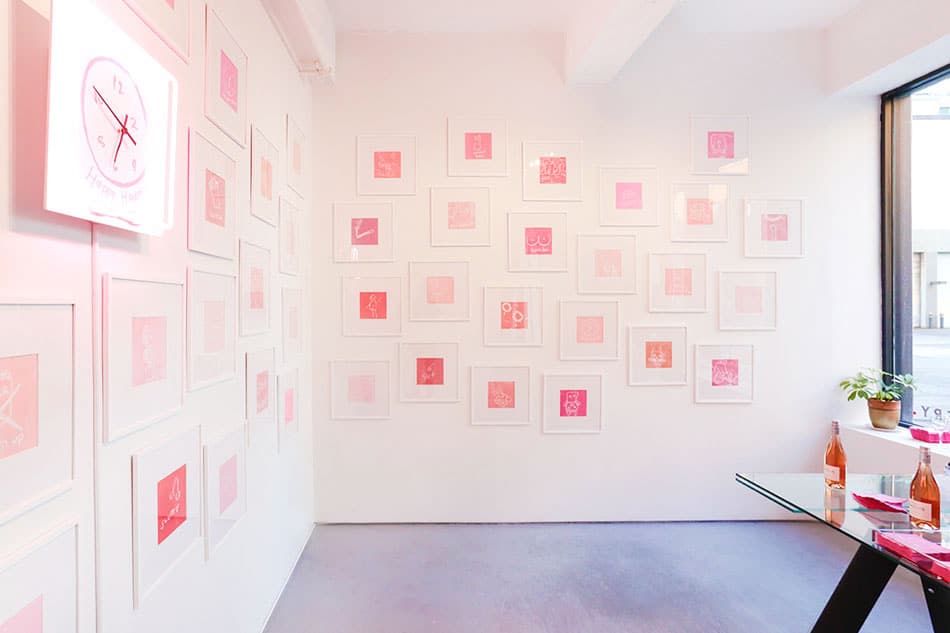 A neon clock face, 2018, among other works in “Happy Hour” at Leila Heller Gallery. Photo courtesy of Jared Siskin and the Patrick McMullan Agency 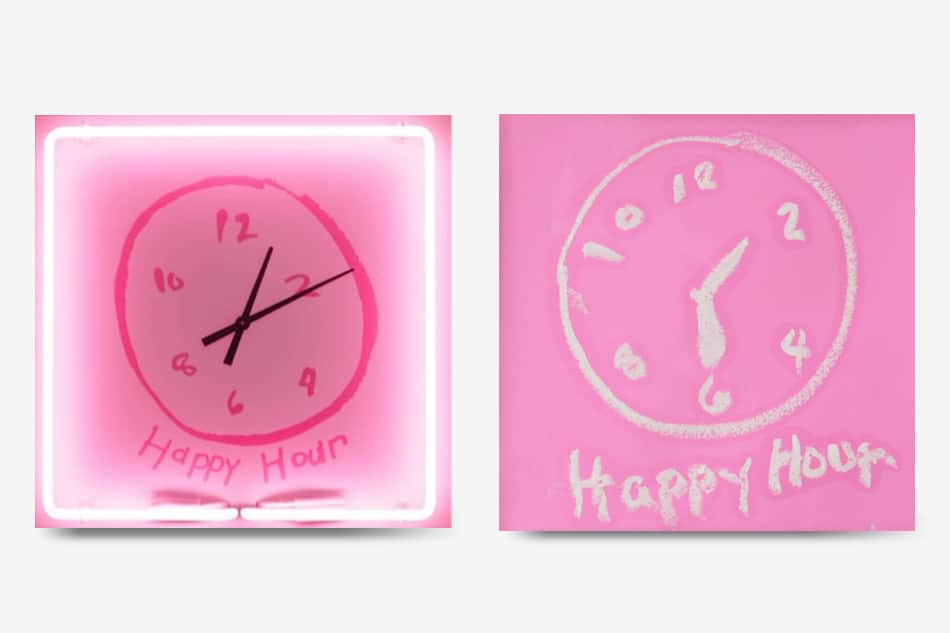 Two “Happy Hour” clocks from the artist’s 2018 show seem to suggest any time is a good time for a drink. 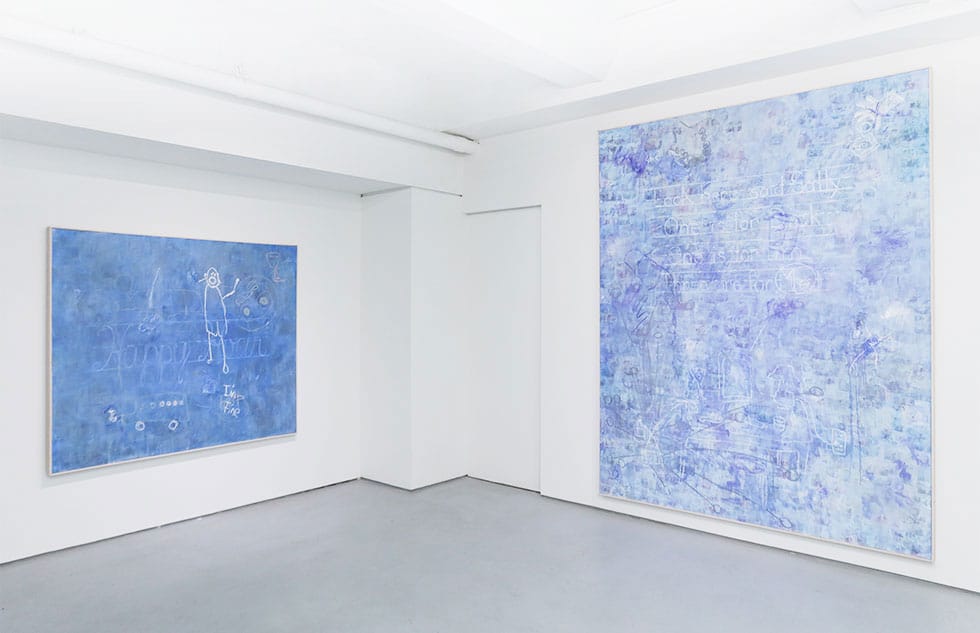 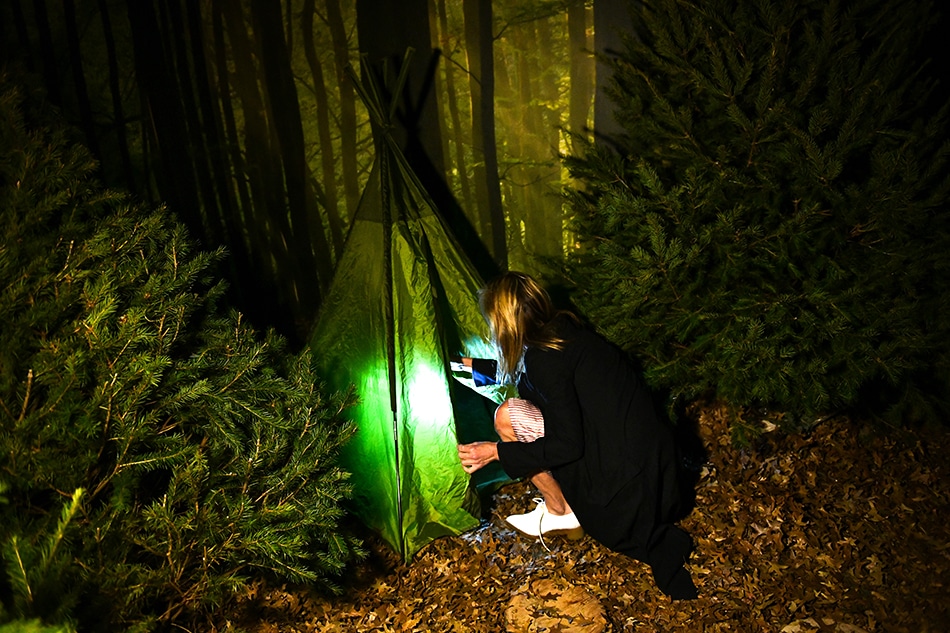 The other paintings in the series, all titled with the names of cocktails, like Pink Lady and Blue Gin Fizz, feature rudimentary drawings along with photographs, Girl Scout badges, quotes from the Dick and Jane children’s books and layer upon layer of acrylic and oil paint that both obscure and reveal. Tellingly, the text from Dick and Jane, unlike other scrawled words and phrases reproduced in the works, is written carefully to remain within ruled lines.

“As a child I was a dyslexic, and I couldn’t read very well,” Hovnanian says. “But I wanted to be perfect, because if I was perfect, everything would be OK, and I wouldn’t upset the applecart,” a common feeling for children of alcoholics. “When I finally started to read Dick and Jane, I saw that they had the perfect family — the white picket fence family, which doesn’t really exist.”

Although the scourge of drinking hovers over all the pictures in “Happy Hour,” Hovnanian also examines women’s roles in the Deep South of her youth in works revolving around debutante rituals and the shaming of girls who are thought to be sexually active. She makes strong use of Girl Scout imagery as symbolic of rigid rules and female perfectionism. The Scouts’ iconic round badges sometimes serve as nipples and condoms in her paintings. An installation titled House of Empty Bottles consists of a small room of wall-to-wall shelves of glass bottles whose labels are pages that Hovnanian took from an old Girl Scout handbook, drew on and tweaked. “Turn off the lights,” one now reads, “so he thinks you are sleeping.” Green chalkboards with white penmanship lines clad the outside of the walls forming the room; barbed wire runs across the top, as in prison walls. 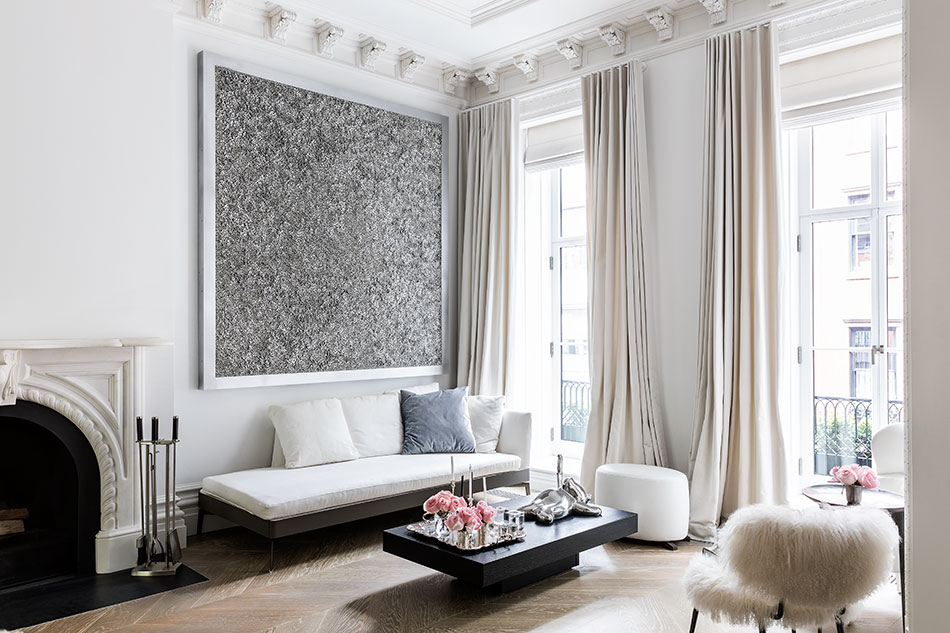 The living room in Hovnanian’s airy West Village townhouse, designed by Piet Boon, features her own artwork, including a piece in cast metal and waxed cotton titled Mirror Motherboard H2, from 2013. Lying on the table is Poor Teddy Stainless Steel, 2015. All photos in this slideshow by Lesley Unruh 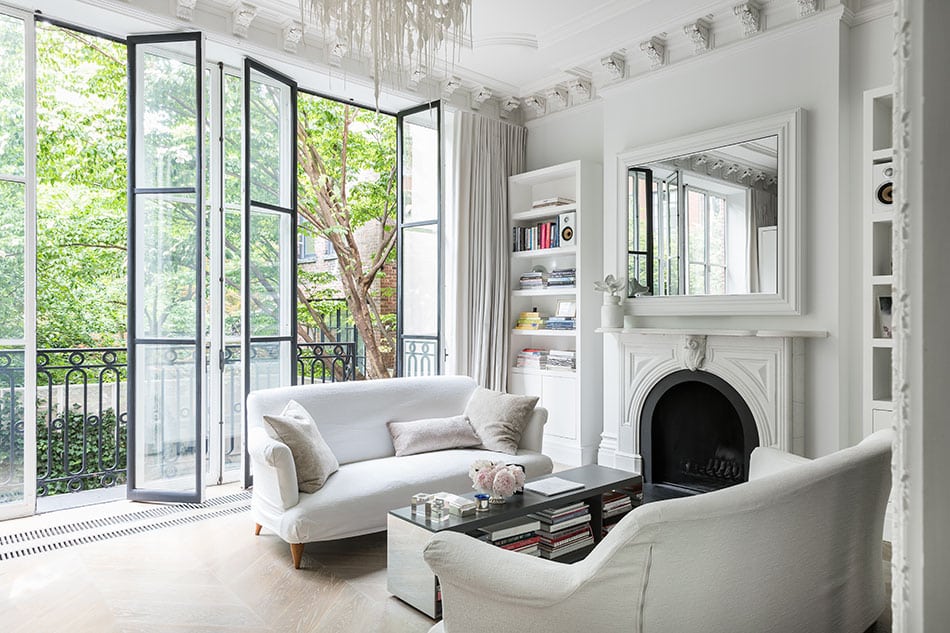 Sitting on the mantel is Hovnanian’s painted bronze Object Petit A, 2007. 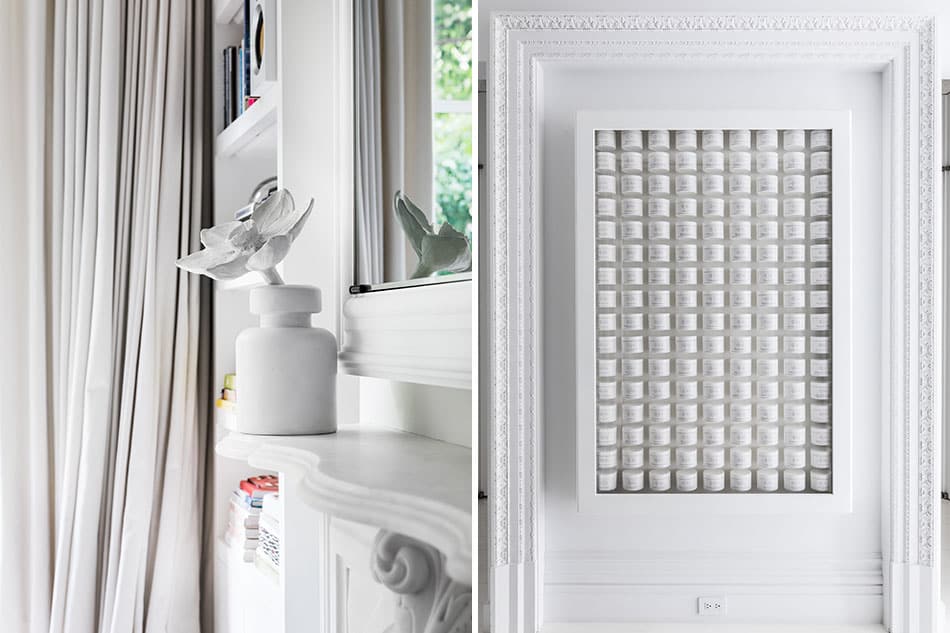 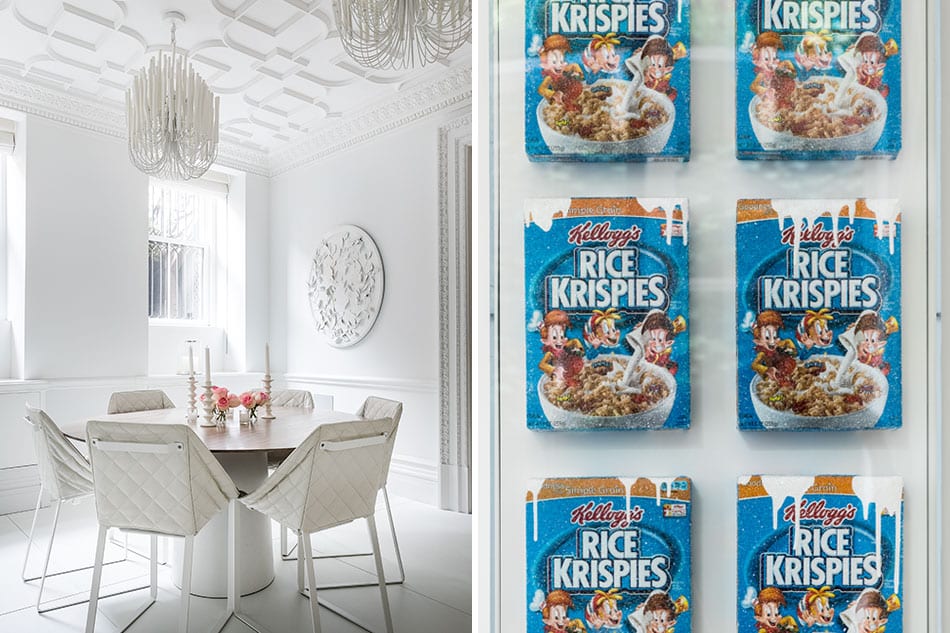 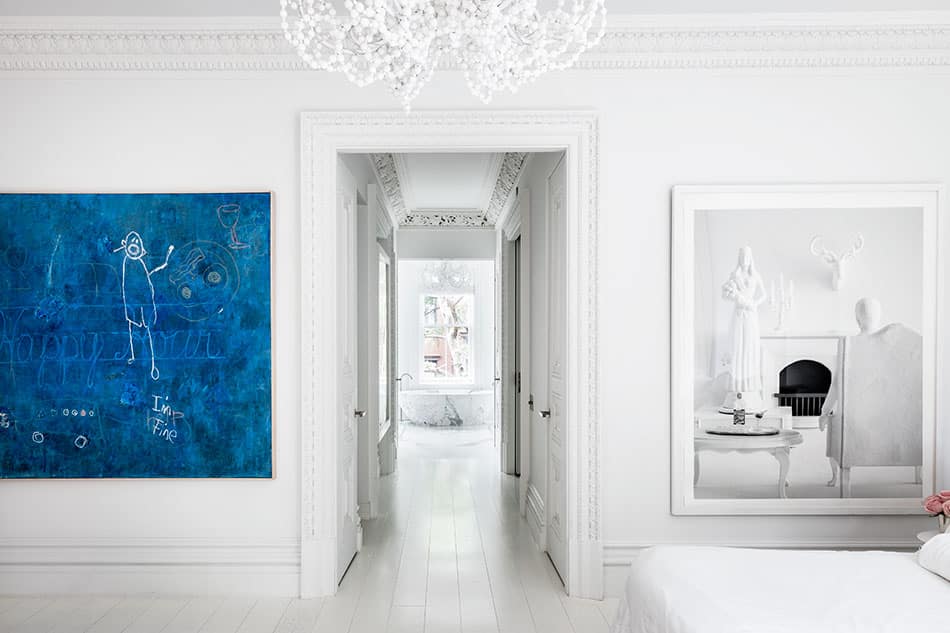 Hovnanian was born in West Virginia. She spent her early years in New York and then on a farm in Ohio, where, she says, she gallivanted outside with her three brothers. “I always thought I was a boy,” she says. “I never even wore a top when I was growing up.”

Her father, a literature professor and writer from Dallas, moved the family to Houston when Hovnanian was in second grade. In New York and Texas, she says, many of his friends were artists, whose studios the family often visited. Both her father and mother also painted. “I always painted and drew when I was little. I never thought I’d do anything but be an artist,” she says. “I felt very fortunate that my father allowed me to go to art school. So many women I meet, their parents did not allow them.”

It wasn’t until she was an art major at the University of Texas, Austin, that she learned she had a learning disability that explained her difficulty reading and writing. A teaching assistant diagnosed it from her atrocious spelling. “He said, ‘You must be dyslexic,’ ” she remembers. “I said, ‘What is that?’ ”

The TA quizzed her orally, which helped bring her grade up from a C to an A-. “Being a dyslexic, you think maybe you don’t have that intelligence,” she says. “I would write my father letters in college, and he would send them back red-inked. He thought he was doing me a favor.”

Hovnanian moved to New York directly after college and became an advertising art director at McCann-Erickson, working on campaigns for soap and cereal and continuing her art practice after hours. She left the agency shortly before marrying Ara Hovnanian, in 1985. Ara is now CEO of the massive Hovnanian Enterprises Inc., the home-building company founded by his father. 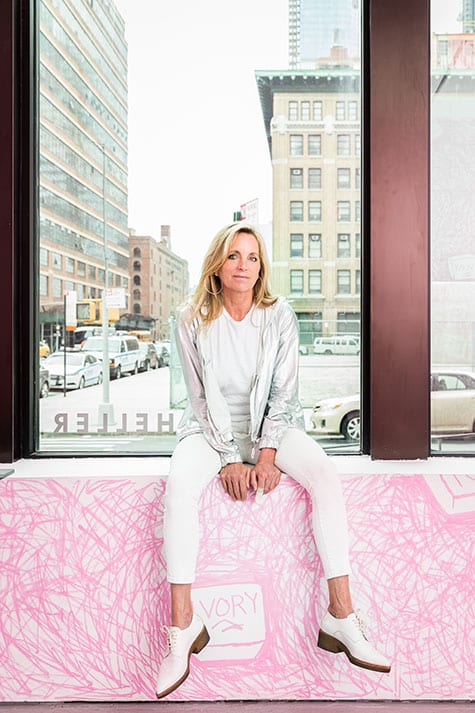 While the couple’s son and daughter were small, Hovnanian kept her studio at home. She occasionally sold a piece but painted mostly for her own fulfillment. Once her children, who are now in their 20s, were both in school, she began to exhibit. Advertising’s effects on women’s self-image has been a recurring theme. For a series titled “Texas Beauty Queen Cream,” Hovnanian made cosmetics jars with real tag lines she found in advertisements, like “Precious skincare for the privileged few” and “Look hot while protecting the planet.” She also made sculptures of beauty queens.

The intrusion of technology in our daily lives has also been a thread running through her work. “My husband was one of the first people to have a mobile phone, back in the day,” she says. “When we went on family vacations, I wanted to throw that BlackBerry away. Then I stopped noticing that he was on it — because I was on mine. That’s when I realized that I was addicted.

“We are very little without our phone,” she continues. “We look through our phones at everything.”

For Leila Heller’s stand at the Armory Show art fair last year, Hovnanian installed FMLMBD Charging Station, which, as the title implies, offered visitors a place to charge their phones under a neon work consisting of an empty battery icon and the words FUCK MY LIFE MY BATTERY’S DEAD (FMLMBD). Inside, she placed a surveillance camera and another phone, so she could call, text or FaceTime — often from her home or studio — whoever entered. “I wanted to be the artist who was present, but present in a very different way,” she says. Since the communications were anonymous and untraceable, the people on the other end of the line were extremely open, leading to conversations that sometimes resembled therapy sessions.

Hovnanian is quick to point out that projects like FMLMBD Charging Station and “NDD Immersion Room” are not meant as prescriptions. She still has a smart phone and is on Instagram. “I’m not shaking a finger at anybody,” she says.

Nor, for that matter, are these three thematically linked exhibitions intended as sermons. “Somebody asked me recently, ‘Are there any happy paintings?’ ” Hovnanian says. “I said, ‘Well, there are happy paintings in the sense that my job as an artist is to create a conversation.” In that case, it’s a job well done.