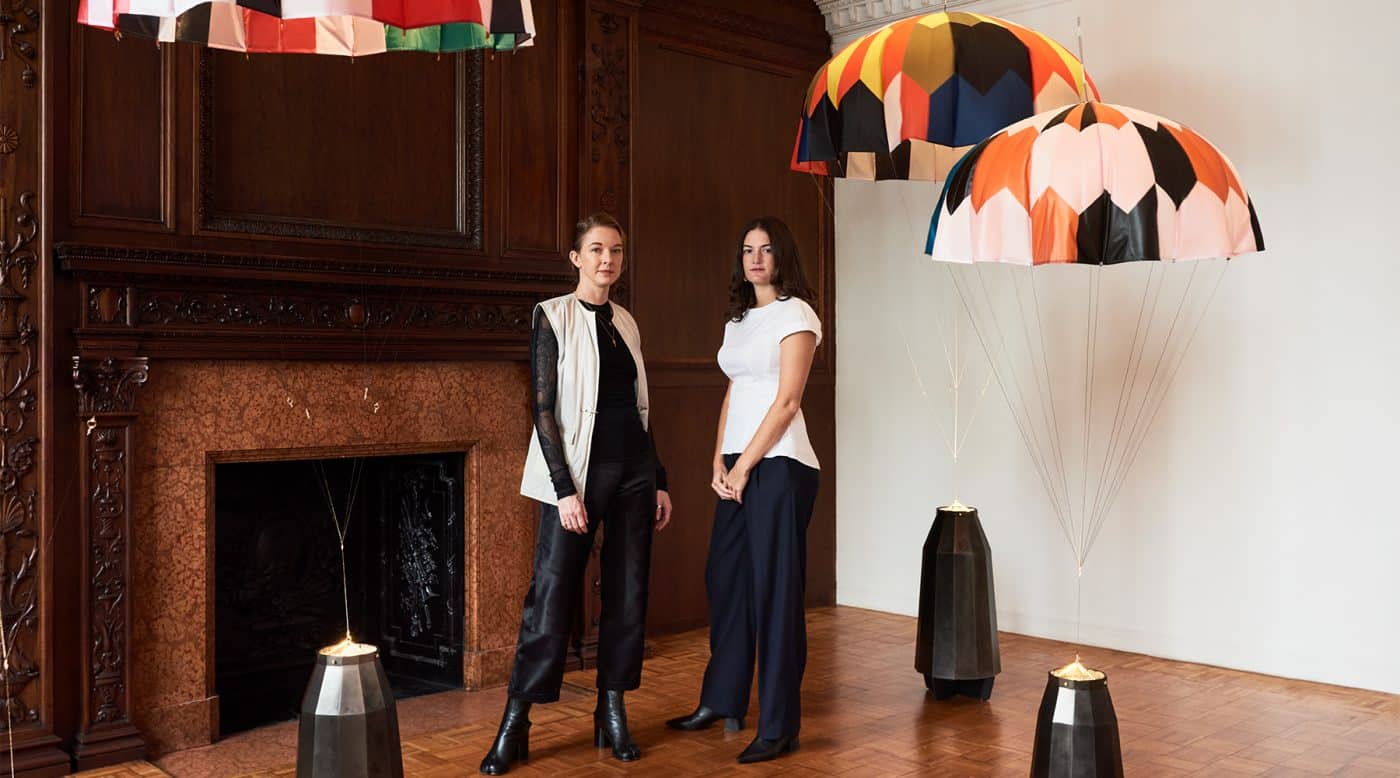 October 16, 2022In a pioneering gallery within a 19th-century townhouse on Manhattan’s Upper East Side, colorful parachutes with angular patterns bob on a never-ending breeze. They spin, dance, slacken and tug like airborne jellyfish as their flower-shaped shadows skitter across the ceiling.

Although the effect is otherworldly and the parachutes are inspired by space-bound inventions, the installation is no science experiment — it’s “Paraciphers,” the latest collection and exhibition from the boundlessly creative lighting designer Bec Brittain. The show, on view at Emma Scully Gallery through December 17, is a project that was more than a decade in the making.

“I have sketches from eleven years ago, from the first time I saw photos of Mars-rover parachute tests in a huge wind tunnel for NASA,” says Brittain. “The way they were illuminated and the way the strings made forms were just beautiful.”

For years, she tried to reproduce those qualities in a lighting collection by transforming parachute-inspired shapes into something else. “But every time I came at it, it just ended up looking like run-of-the-mill lanterns,” she says. “I couldn’t figure it out. So it sat in the depths of my sketchbooks.”

It was during the pandemic lockdown, while suffering from long COVID, that Brittain had a breakthrough: She realized she was trying to reinvent something that already had an elegantly functional design. “A lot has changed over the past eleven years, and I just finally had the confidence to let parachutes be parachutes,” she explains. “I realized I didn’t need to turn them into a producible, designed lighting collection. These things are good enough on their own — they’re cool and they’re joyful — so, I could just let them be themselves.”

In February 2021, images of the Perseverance rover descending to the surface of Mars reignited her interest. Photos showed it had a parachute with a striking orange-and-white pattern hiding secret messages in binary code. It didn’t take long for space enthusiasts to decipher them: The inner ring spelled out the phrase “Dare mighty things,” while the outer ring provided the GPS coordinates for NASA’s Jet Propulsion Laboratory, in Pasadena.

Brittain’s Paraciphers, each anchored to the ground by a cast-aluminum vessel containing a fan and a light source and vaguely recalling a reentry capsule, similarly contain hidden messages, spelled out in a telegraph code. The designer isn’t giving anything away, but she says the messages are focused on notions of equality and community.

For gallery owner Emma Scully, the fact that Brittain’s Paraciphers blend beauty with political statements while also remaining wide open to personal interpretation is no surprise. “With Bec, nothing is made just for fashion. Everything starts from a conceptual backbone,” says Scully, who founded her gallery in May 2021. She had previously worked at 1stDibs in New York and then with designer Rose Tarlow in Los Angeles, where she began dealing in collectible design as a side business before returning to New York to focus on it full-time. All along, her hope has been to give a platform to designers she believes are worthy of greater recognition. (Since opening her New York space, she’s organized shows around such talents as Britain’s Jane Atfield and the Tbilisi, Georgia–based design atelier Rooms Studio.)

“Bec is really one of the most important American lighting designers,” Scully says. “That’s a grandiose statement, but there’s an attention to form, attention to material and attention to detail in her work that’s so thoughtful.”

Brittain’s path to the forefront of American lighting design wasn’t a straight one. She initially studied fashion at Parsons School of Design but was turned off by the industry’s culture of  disposability. So, she switched to a focus on the philosophy of design at NYU Gallatin and, after graduating, moved on to study architecture at London’s Architectural Association. 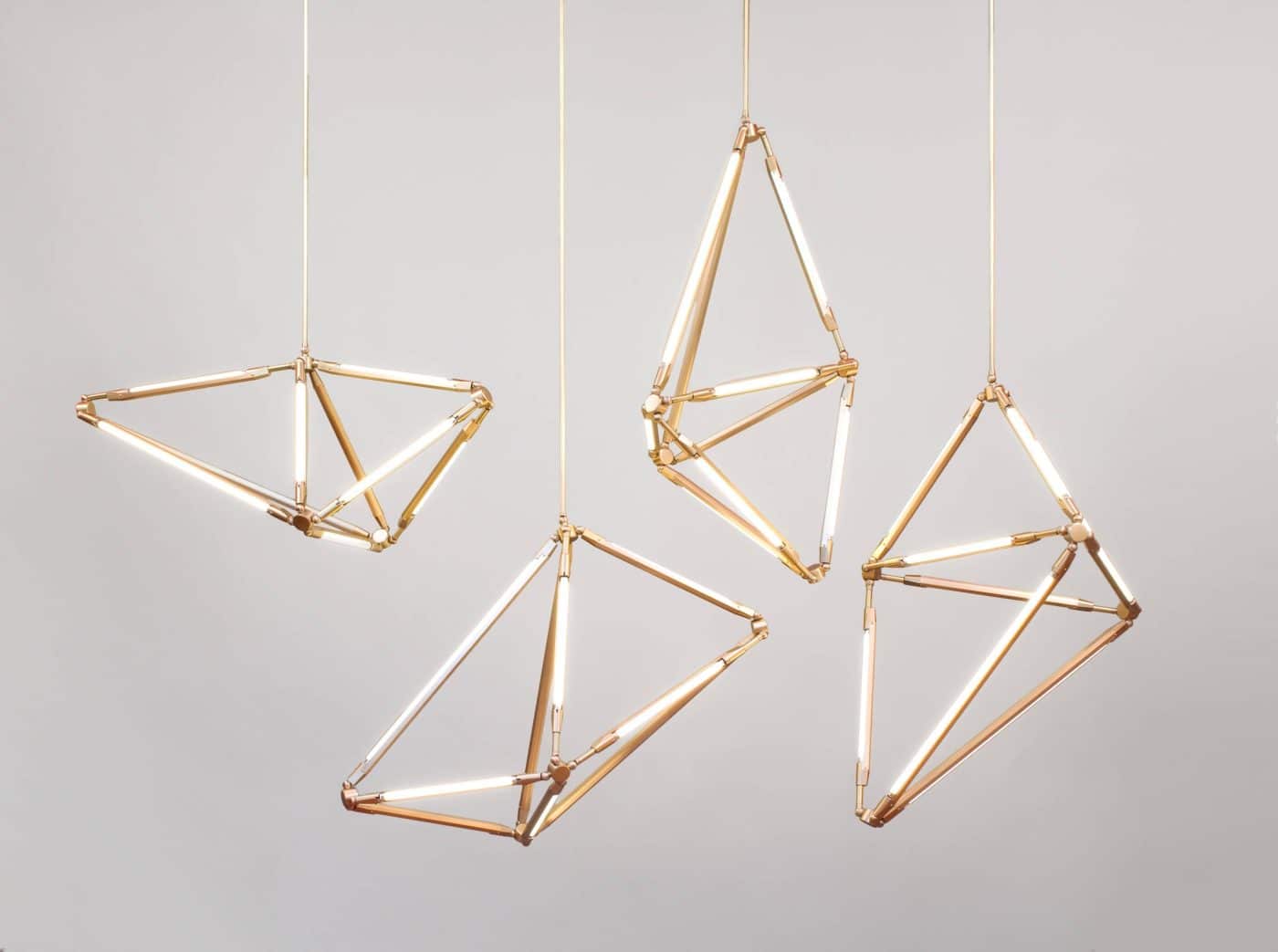 Among Brittain’s past lighting collections, her SHY fixtures are made with LED tubes arranged in faceted forms. 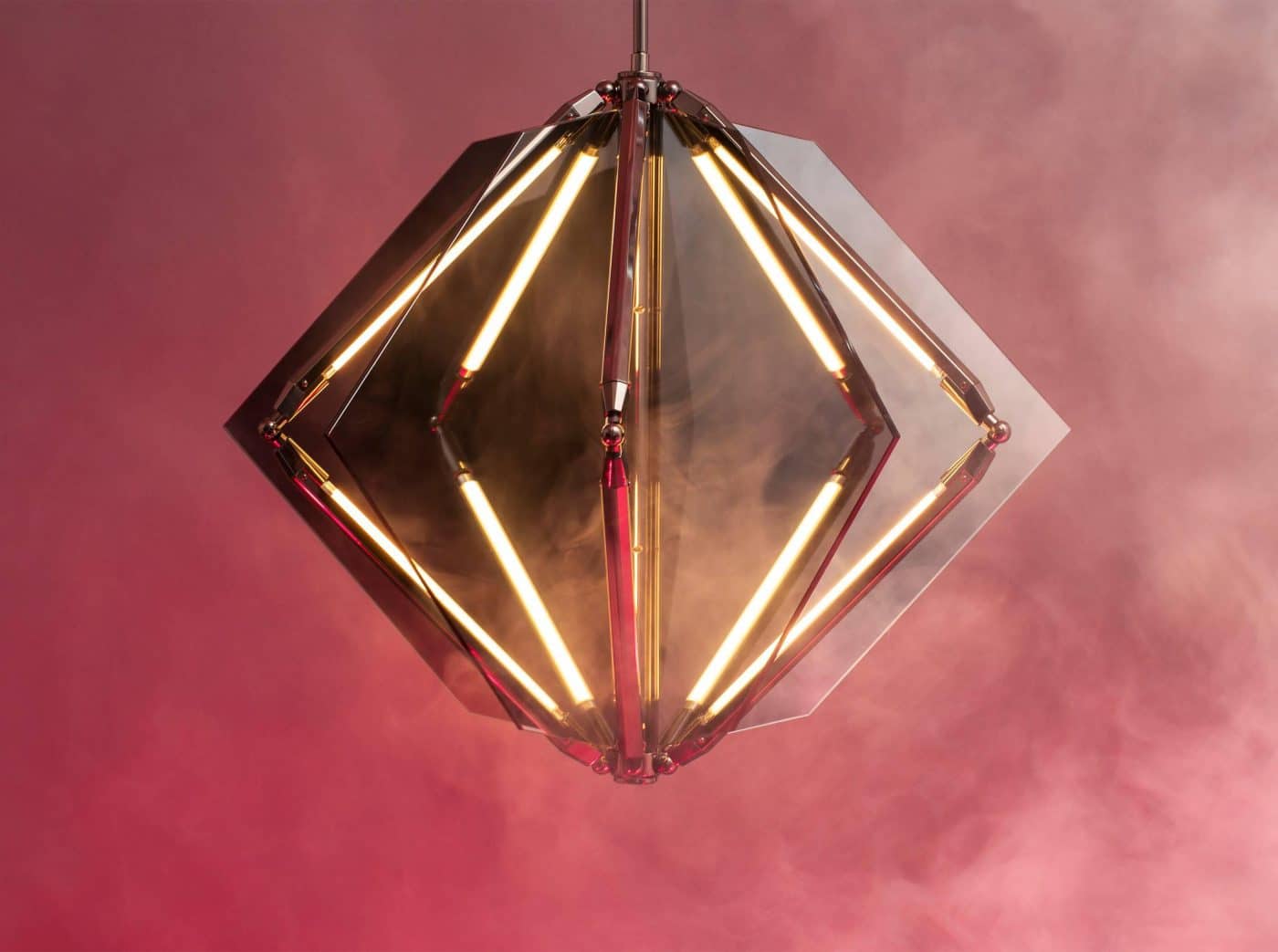 The Echo fixture is composed of LED tubes and mirrored fins that reflect the light. 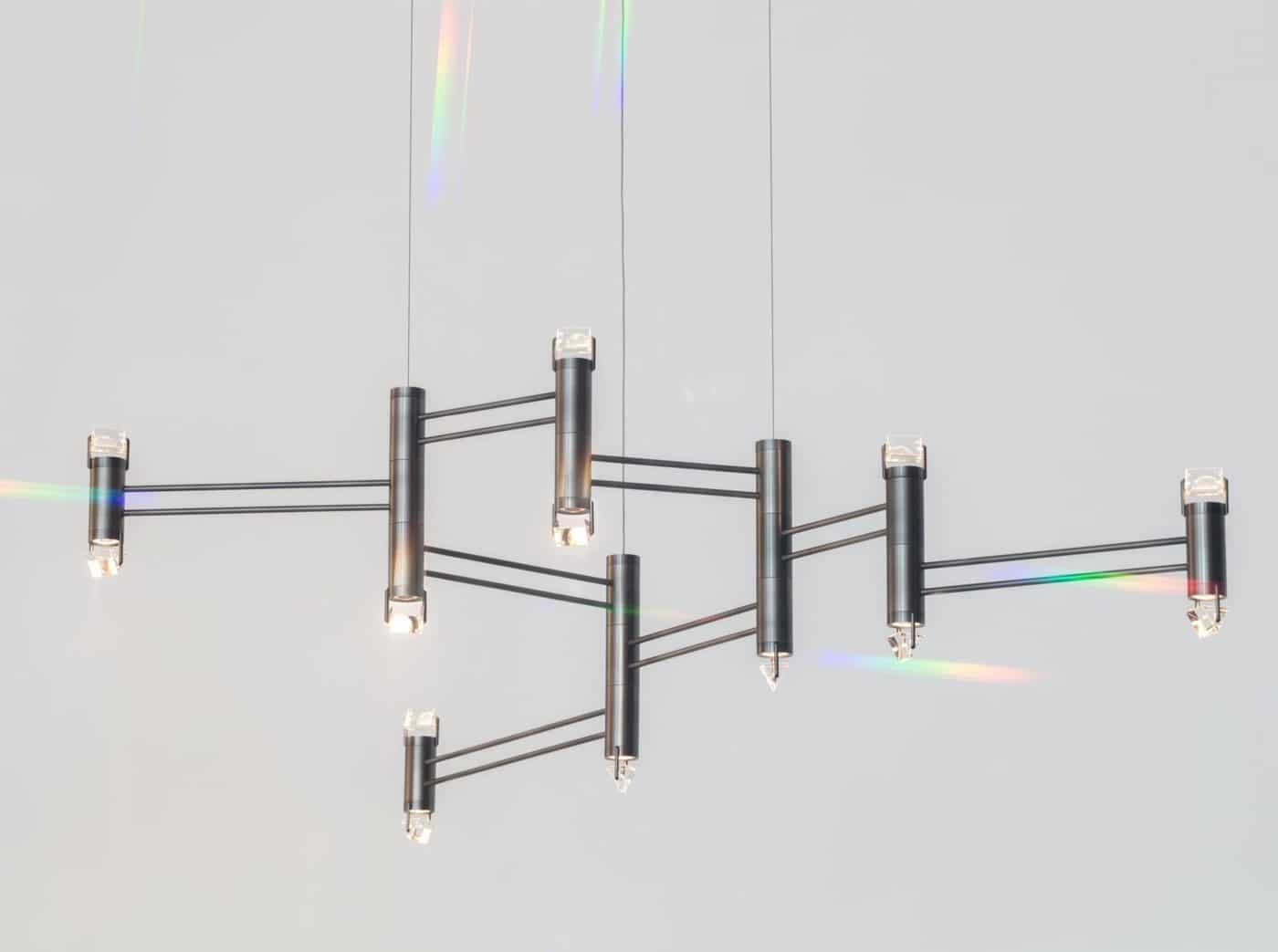 The Aries VIII.I chandelier was inspired by artist Olafur Eliasson’s concept and set design for the ballet Tree of Codes, in which the dancers wore all-black suits highlighted with LEDs. 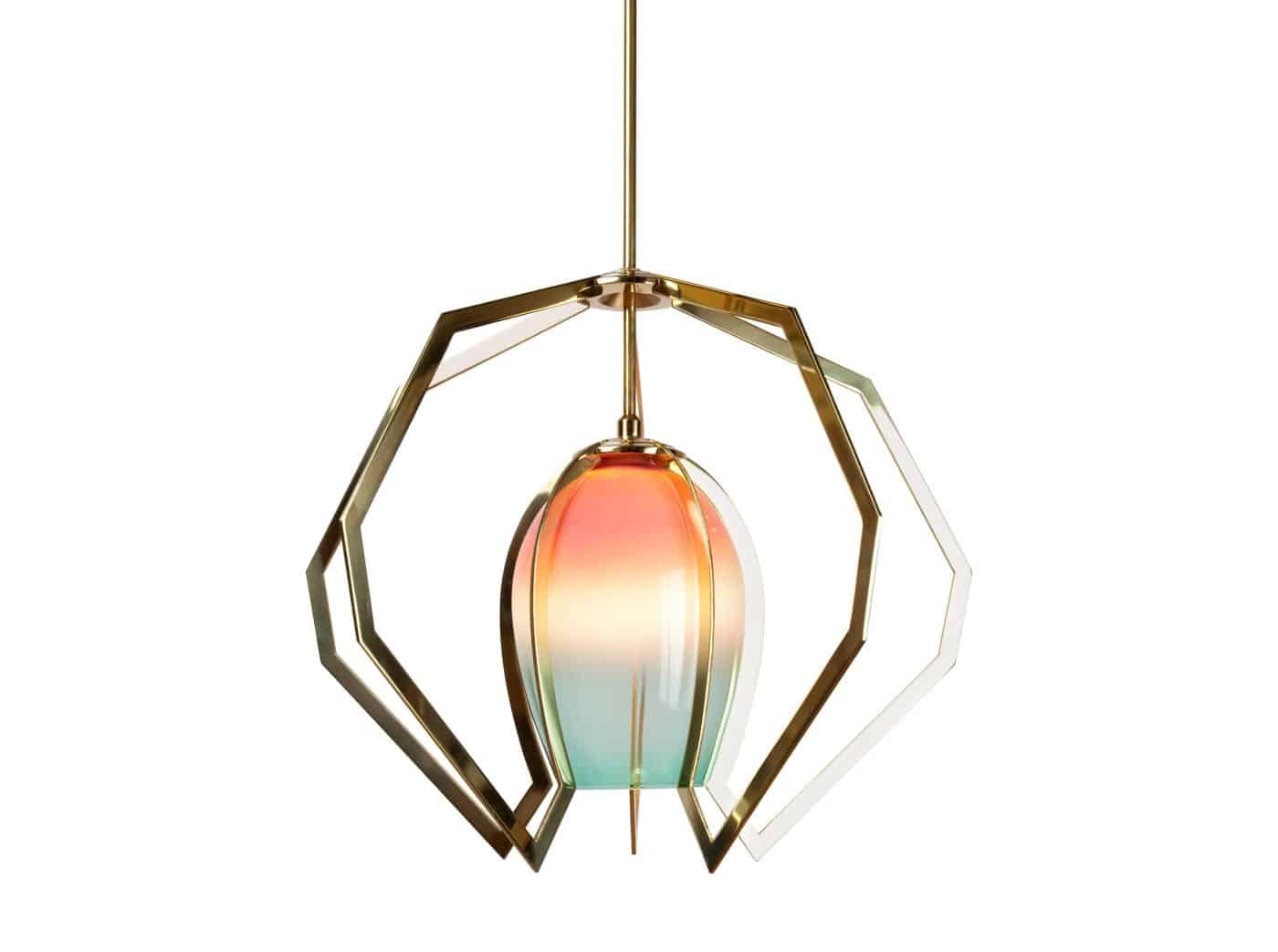 The Vise fixture features a handblown glass globe within a brass frame.

Back in New York, she went to work designing upscale architectural hardware at H. Theophile before landing at fellow lighting designer Lindsey Adelman’s studio as design director. In 2011, she founded her own studio.

Brittain has become best known for large-scale, space-defining lighting systems that she and her team assemble in-house from locally crafted components. These include her SHY fixtures, which use LED tubes to create faceted forms; the minimalist Aries chandeliers, which dazzle with illuminated glass prisms; and the Vise pendants, which enclose colored glass diffusers within brass frames.

At the same time, she feels compelled to continue experimenting with new forms, materials and ideas that result in one-off fixtures and limited editions. Her Aries Rising Capricorn series relies on snaking acrylic rods and fiber optics to essentially draw lines in space. For Mercury, she used LEDs, stone beads and large-scale suede tassels to create a curtain of light. Her Gemini series resulted in “two-offs” — playful two-of-a-kind lamps that were born as pairs.

“Starting out, I was definitely more focused on production work,” Brittain says. “It’s just what made sense to do, and there was a huge amount of creativity in it — both figuring out these lighting systems and starting a new business.”

But in 2016, a few years after establishing her own production facility, she had a son, Indigo, which prompted her to recalibrate. She realized that she was ready for her next creative act. Now, she is less concerned about the reproducibility of her experiments.

“It’s been a really transformational few years,” says Brittain. “I want to do my own thing and explore pieces that maybe we can’t keep making because they’re so difficult.”

In addition to thinking more deeply about a designer’s role in the world — three years ago, Brittain made the decision to donate 15 percent of her studio’s annual profits to organizations focused on reproductive justice and ending cash bail — she refuses to be held back from what she has done before. “I don’t just do lighting,” she says. “It’s about being freer with where sculpture and design overlap.”