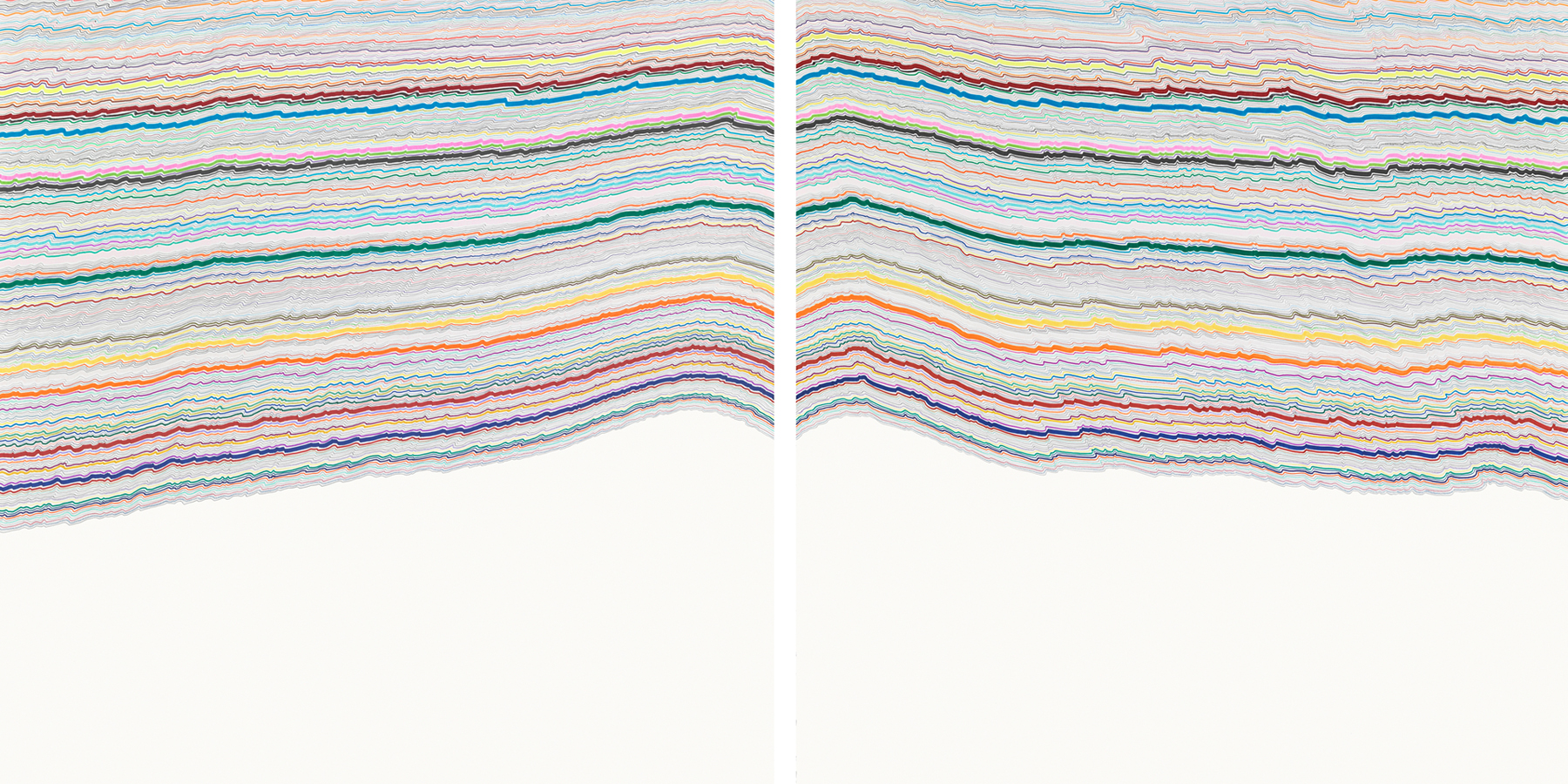 Twist ties, price tags and scented Magic Markers are the stuff of drawings, performances and photographs for this Massachusetts-based artist. 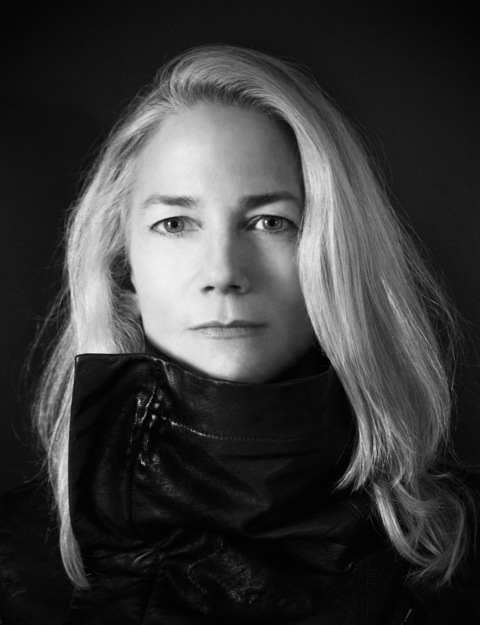 What would happen if I made a drawing using every pen, pencil, marker, crayon that I could find in my home, studio and car?” This was a note to herself that Rachel Perry Welty found while flipping through her sketchbook of ideas. She combined the idea with another thought she had jotted down about making a drawing with both her left and right hands to provide a set of rules for her new series “Chiral Lines,” now on view through October 17 at Yancey Richardson Gallery in her fifth solo show at the Chelsea gallery.

For each of these large-scale, two-panel drawings, Welty used every writing implement she could unearth — first drawing a single freehand line with her left hand down the outer edge of the left sheet and then transferring the tool to her right hand and doing the same on the right, before throwing the mark-maker into the done pile. She worked her way randomly through her box of tools and inward on the sheets, accreting hundreds of ever more tremulous lines in a kaleidoscope of colors and thicknesses. “They’re mirror images, but they’re imperfect,” says Welty, who is interested in how these works contain a history of a household — including her grown son’s childhood scented markers — and evoke measurements of time like seismographs, EKGs or, in one that builds outward from tiny circles at the center of the sheets, psychedelic rings of a tree. They also speak of the time and stamina required to make them. “It’s like doing deep knee bends when you get down to the bottom,” she says. “I never lift the pen or pencil.” 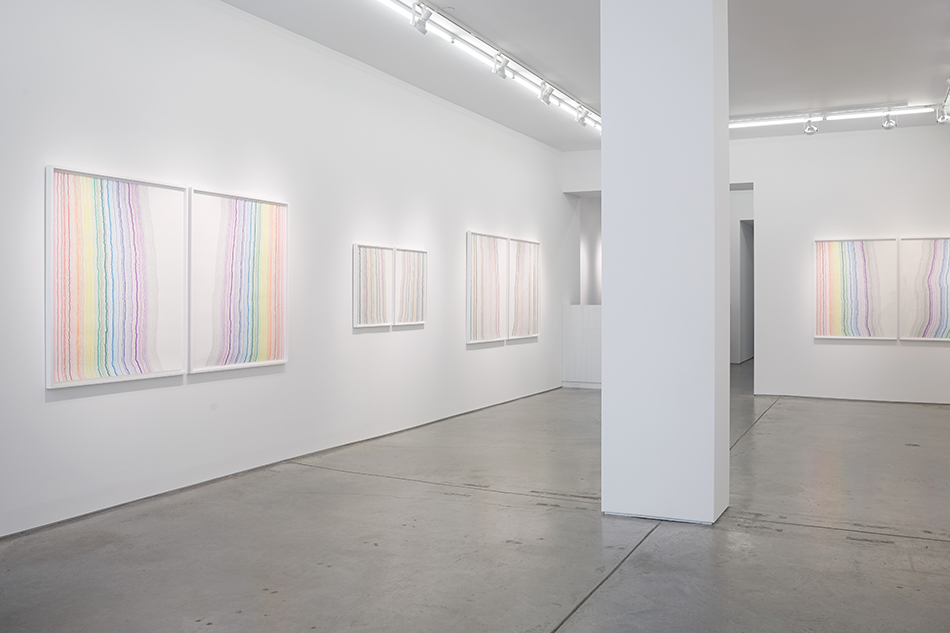 Welty’s two-panel “Chiral Lines” drawings are freehand works on paper made with a variety of materials, including graphite, marker, ballpoint pen and colored pencil. “They’re mirror images, but they’re imperfect,” the artist says. 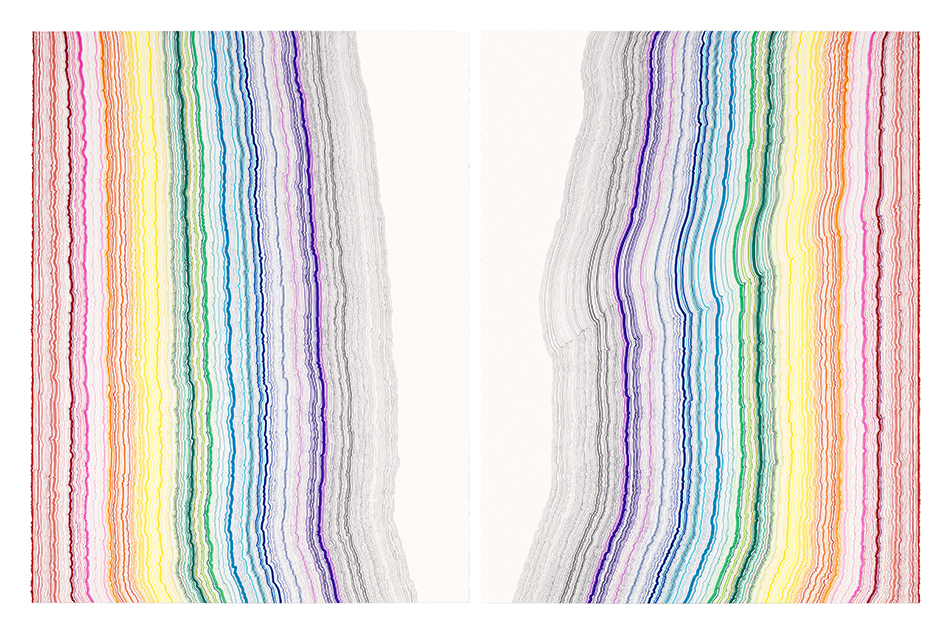 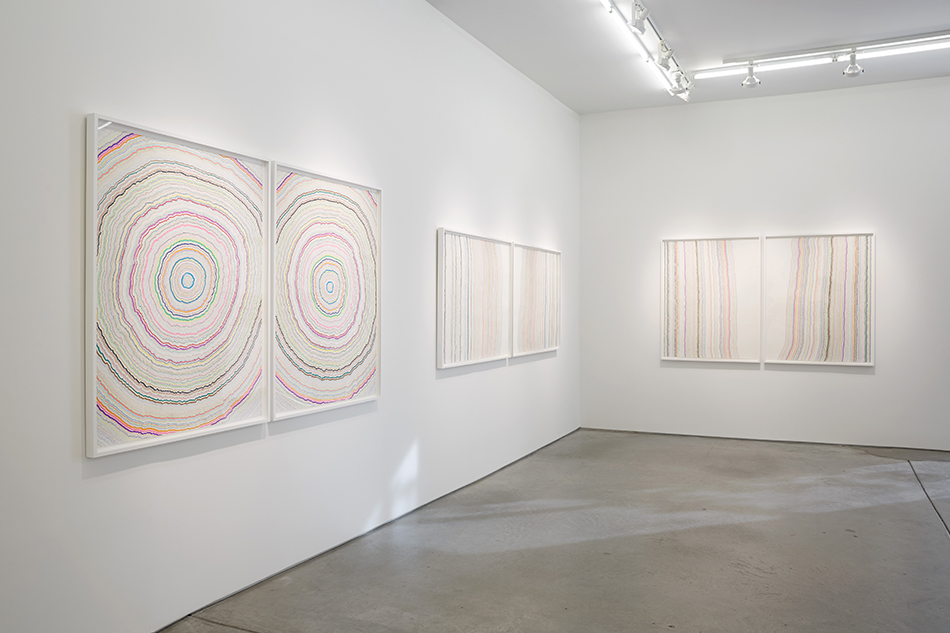 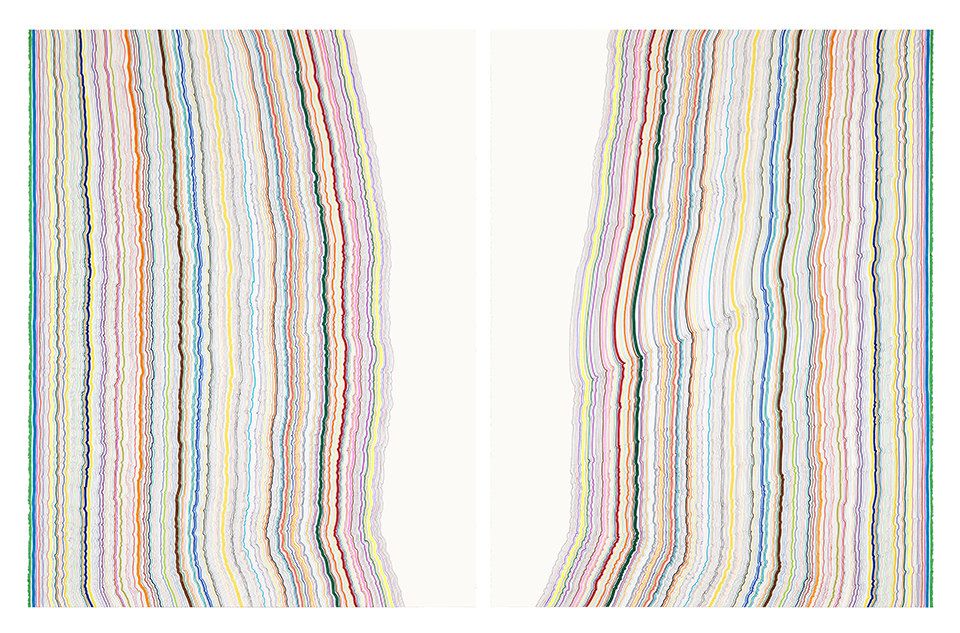 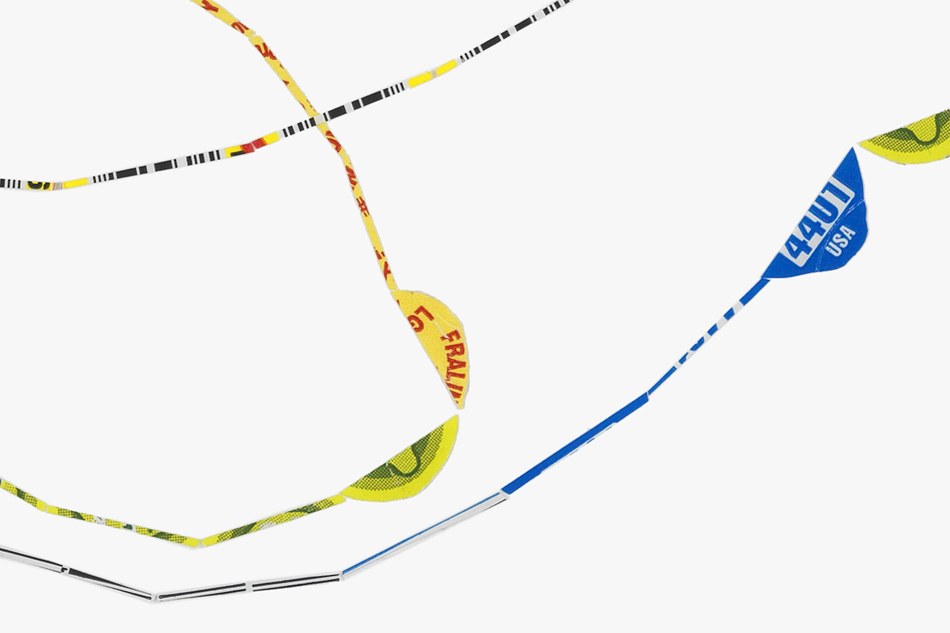 A detail of Lg. Limex, 2013, from Welty’s earlier series “Fruit Stickers,” which is also being shown in the gallery. 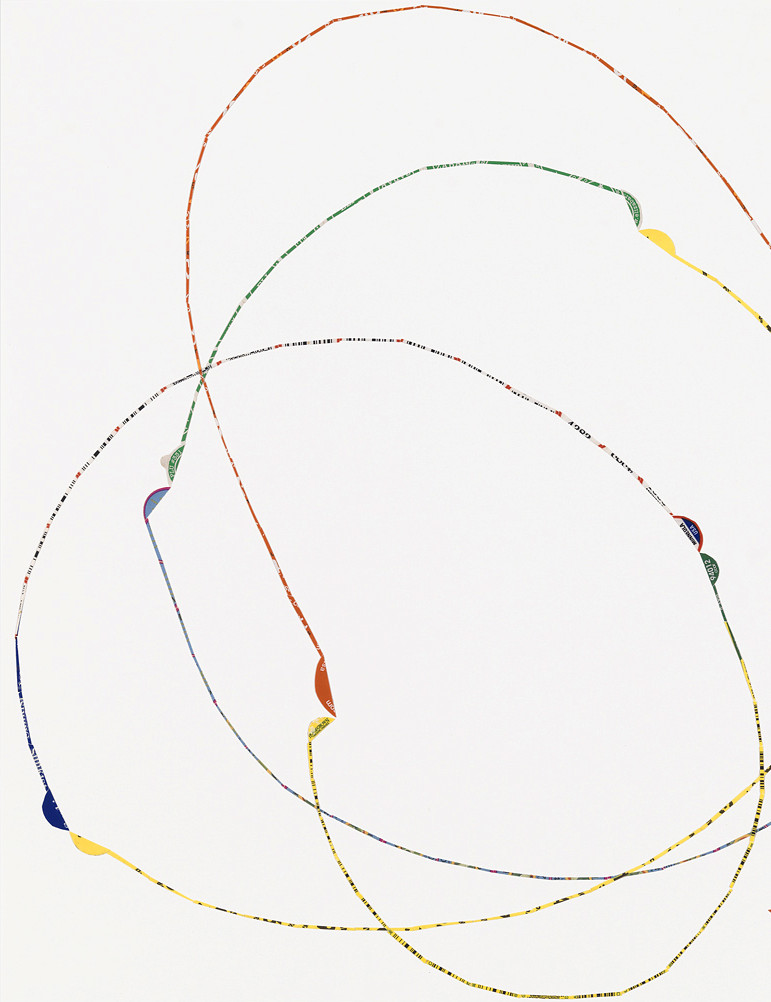 Since receiving her diploma and fifth-year certificate from the School of the Museum of Fine Arts, Boston, in 2001, Welty has mined the spheres of her daily life for often unnoticed yet omnipresent materials like twist ties or price tags that she collects and recycles into installations, drawings, videos, performances and photographs. For her ongoing series “Soundtrack Drawings,” she uses an app on her phone to log the background songs that follow her throughout the day at the grocery store and bank, and eventually spells out all the lyrics to, say, Elton John’s “Sorry Seems to be the Hardest Word,” using cutout letters from junk mail in drawings that resemble ransom notes.

For “Fruit Sticker Drawings,” another ongoing series now on view in the project space at Yancey Richardson, she harvests the colorful stickers from her fruits and vegetables and stores them on sheets of wax paper. Later, she slices each sticker into slivers that she lays end-to-end in continuous meandering loops on small-scale drawings. “It’s this cyclical nature — we shop, we cook, we eat, we sleep, we get up and do it all over again, the business of living,” says Welty, who is interested in the rich economic, geographic, social and political information contained in these little stickers.

Welty, 53, was born in Tokyo while her father was on a two year Fulbright scholarship. The family moved from Japan to Connecticut and then to Minnesota when her father took a job as director of East Asian studies at Carleton College. They returned to Japan again while Welty was in grade school. “The idea of beauty in the everyday was something I absorbed there,” she says. She received a BA in English literature at Connecticut College and worked in the art departments at advertising firms for two years before having a son, who was born prematurely and had health issues that required her full attention in his first years (he is now a healthy adult).

At 36, she started art school which gave her the conceptual language for the weird little performances and installations she had been doing all her life. Her first fully realized project was a painstaking transcription of her son’s 645-page hospital chart, letter for letter, onto 23 sheets of gridded vellum. “I’m interested in issues of privacy and identity and authority, how much information is out there for anyone to access,” says Welty, who exhibited the piece while she was still in school. It attracted the attention of gallerist Barbara Krakow, who began showing Welty in Boston. 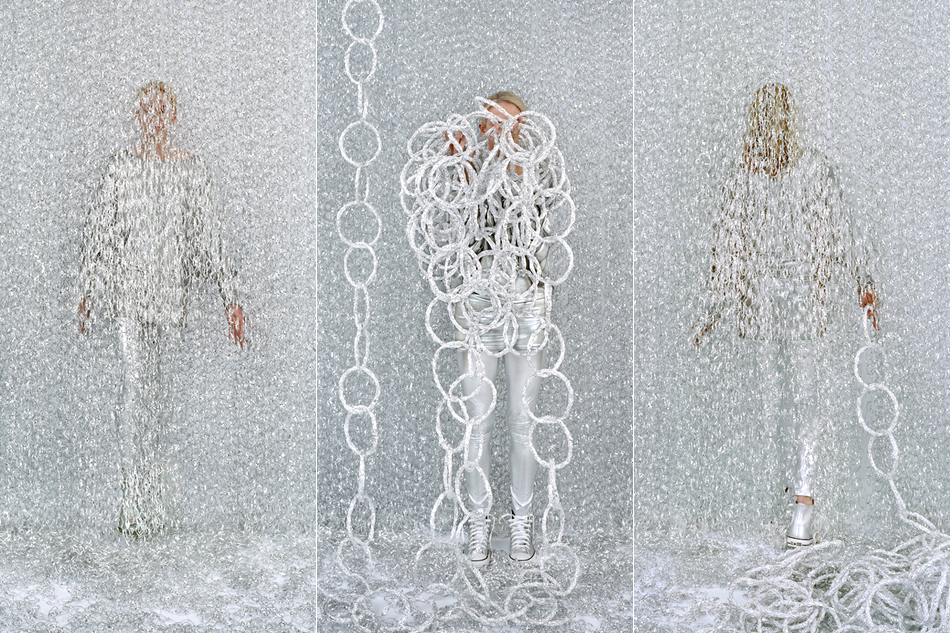 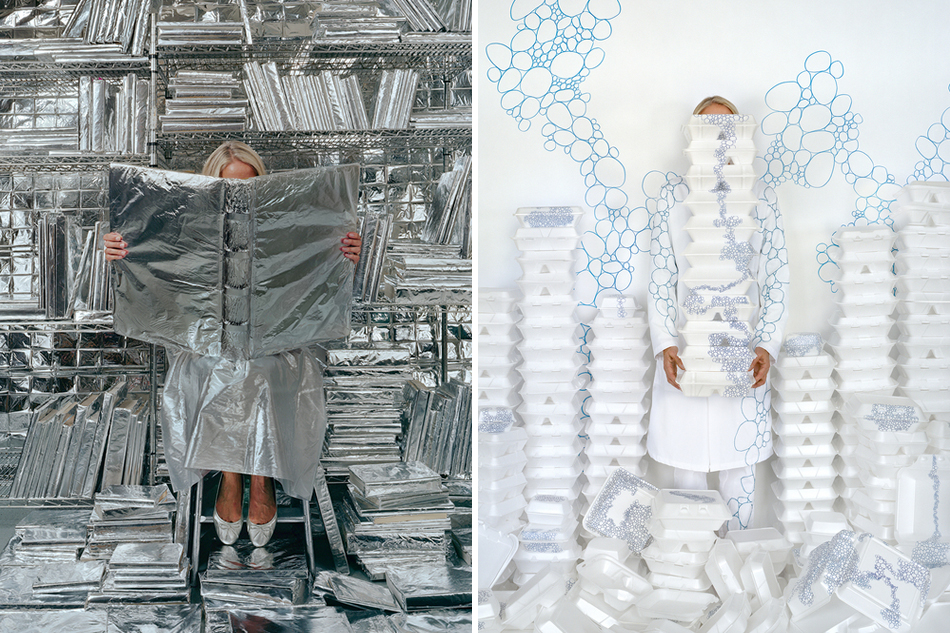 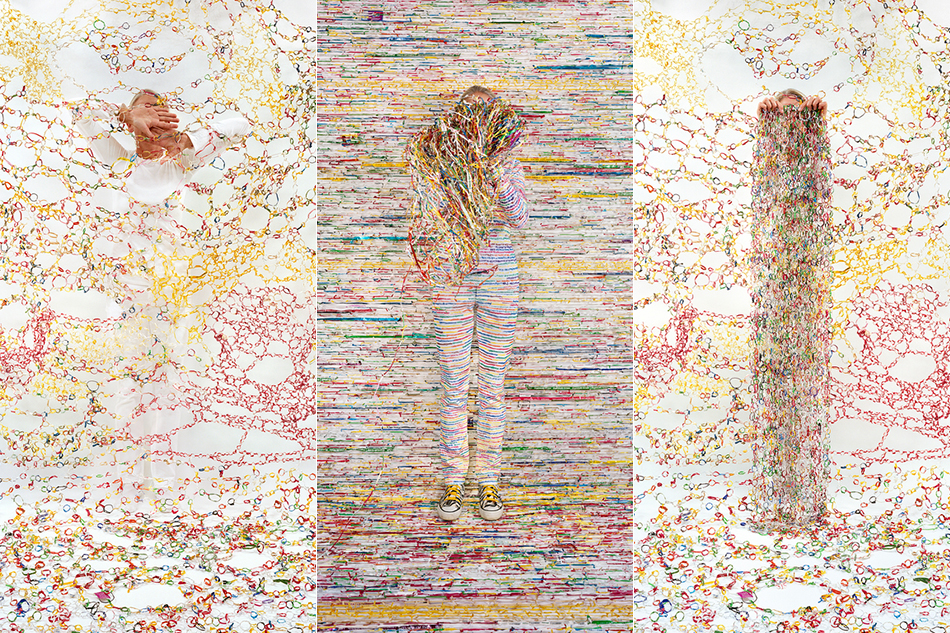 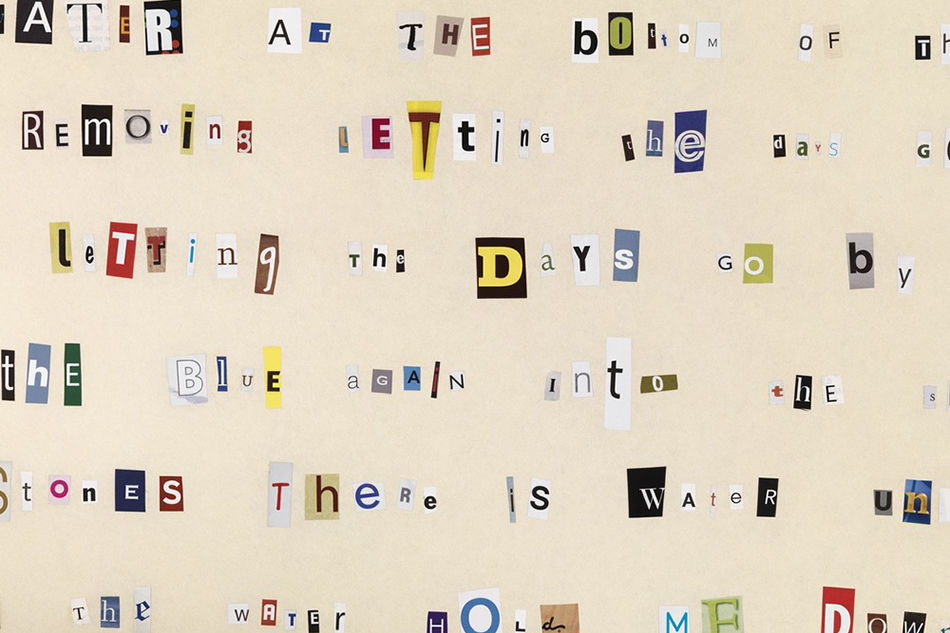 For her series “Soundtrack Drawings,” Welty uses cutout letters from junk mail to spell out lyrics to songs she has heard throughout her day. Seen here is a detail from Sorry Seems to be the Hardest Word by Elton John (TJ’s grocery store), 2014. 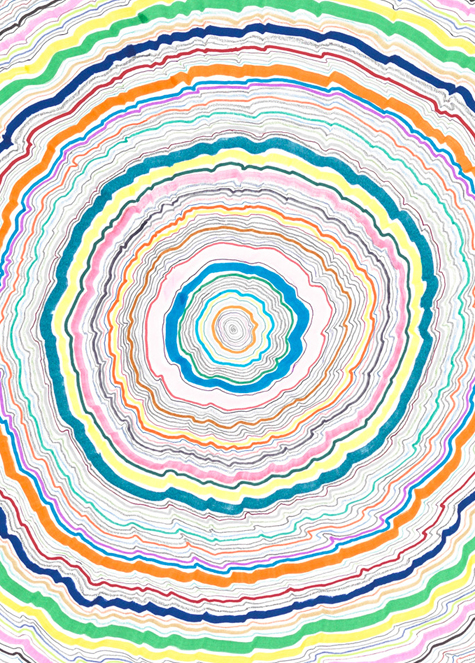 Welty, whose home and studio is in Gloucester, in the North Shore area of Massachusetts, received a surge of attention after becoming a finalist for the 2006 Foster Prize at the Institute of Contemporary Art, Boston, for her video-performance piece Karaoke Wrong Number, among other pieces. Using four years’ worth of saved wrong-number messages — ranging from someone wanting to arrange delivery of a nativity scene to another apologizing for not acknowledging a death — Welty transcribed, memorized and lip-synced each with deadpan accuracy. “I imagined exactly what these people looked like and who they are,” says Welty. “I channeled them through me.” She didn’t win the prize but the museum acquired the piece for its permanent collection.

More recently, the Museum of Fine Arts, Boston, acquired the large-scale 2010 print Lost in My Life (Fruit Stickers), part of another continuing series combining installation, performance and photography. For these, she builds backdrops and dons outfits made with materials pirated from other bodies of her work — in this instance, they are sheets of wax paper speckled with fruit stickers that she taped together into translucent veils. She then inserts herself into the mayhem of color and pattern for a photo shoot, where she becomes almost camouflaged except for her hands and blond hair and outline of her body. Both humorous and visually dazzling, the “Lost in My Life” photographs speak to the overwhelming integration of art and life at the heart of the artist’s practice. It turns out that discount price stickers can be pieced together into a surprisingly couture-looking dress and accessories, in which the artist almost dissolves into the wallpaper composed of the same vibrant patterning. Coming soon — a new “Lost in My Life” based on her “Chiral Lines” motif. “The backdrop only took me a month at Yaddo to do,” Welty quips of her time at the Saratoga Springs, New York, artists’ retreat, “working 16 hours days.”