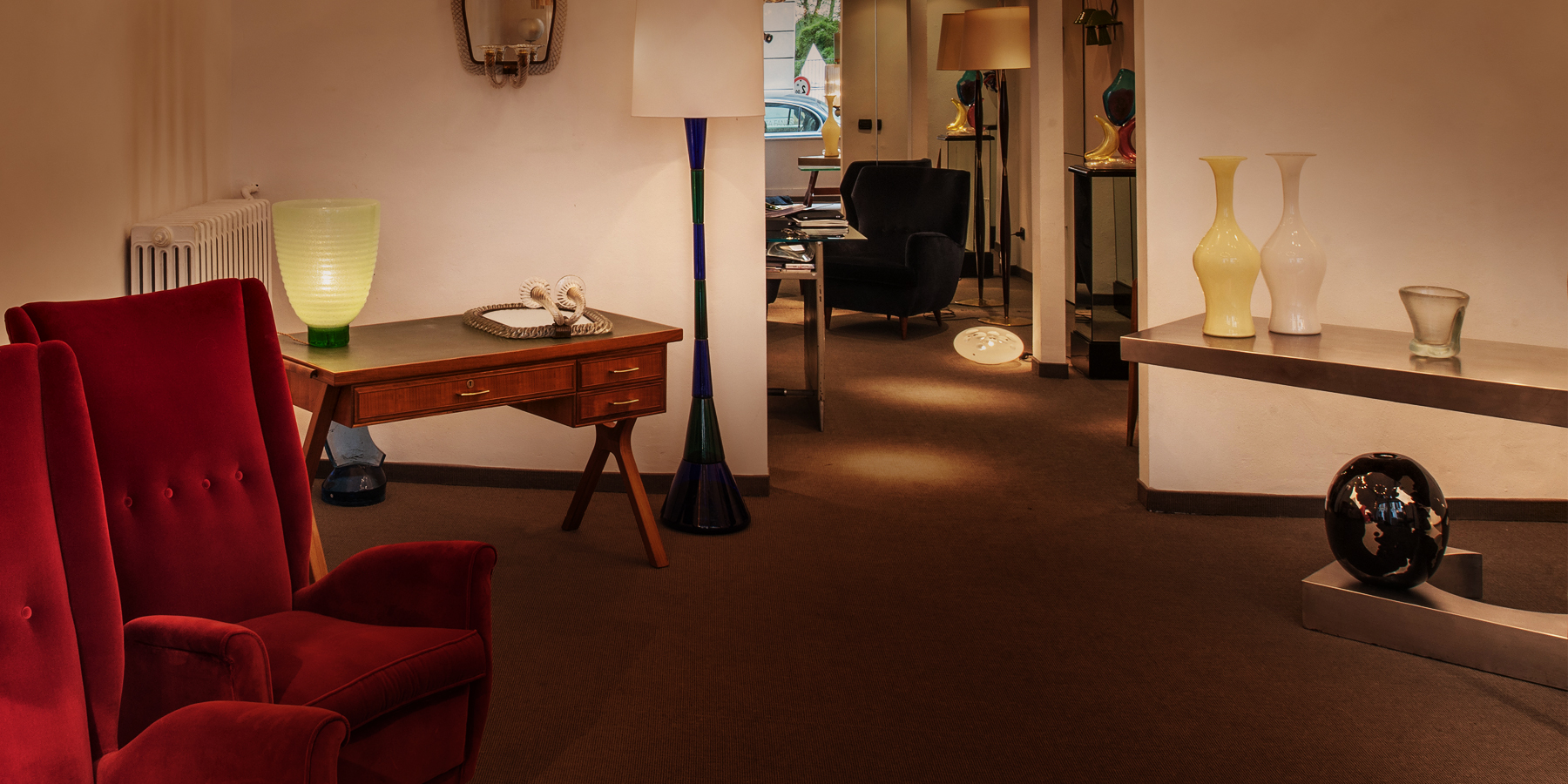 From her bijou gallery in Milan's tony Brera district, the Hungarian-born Venetian-glass expert deals in the most exquisite of mid-century Murano masterpieces. 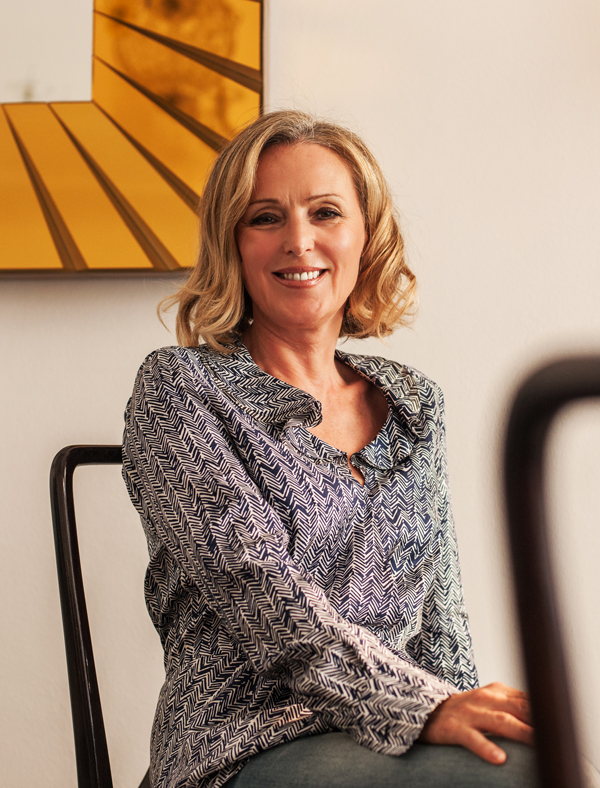 September 2013The Milan dealer Rita Fancsaly – together with her glass-connoisseur husband – specializes in extraordinary examples of Venetian artistry, as well as modern Italian furniture.

You might say that Milan-based Murano-glass dealer Rita Fancsaly married into her particular m?tier. Not only is her husband, Franco Deboni, a leading expert on the subject – having written books, lectured, curated and consulted on the delicate Venetian specialty – he’s also a well-regarded glass artist himself, with four decades of experience.

“If you want to know glass, you have to work with it,” says the blond-bobbed Fancsaly, dressed in form-fitting head-to-toe black and sitting behind the desk in her petite white-walled gallery in Milan’s artsy Brera district. “You have to be there. You have to be in the furnace.” Or, apparently, live with someone who is.

Fancsaly left her native Hungary more than three decades ago to come to Italy. “I was always in love with it,” she says. “Even when I was six years old, I knew I wanted to be here.” She studied art history, attending Sotheby’s Institute of Art in London and was dealing in Hungarian art when she met Deboni. She opened her gallery shortly thereafter, in 1983, later switching her focus to match his: iconic pieces of Venetian glass from the middle of the 20th century, plus Italian furniture designed by the biggest names of the period – Gi? Ponti, Paolo Buffa and the like. (The gallery also stocks a smattering of Fontana Arte pieces, about which Deboni has just written a definitive volume.)

Today, about 70 percent of Fancsaly’s business is in glass – lighting and decorative objets plus a bit of tableware – most of it from the 1940s and ’50s. As with the furniture, she deals almost exclusively in the major producers: Seguso Vetri d’Arte, Archimede Seguso, Venini and Barovier & Toso. 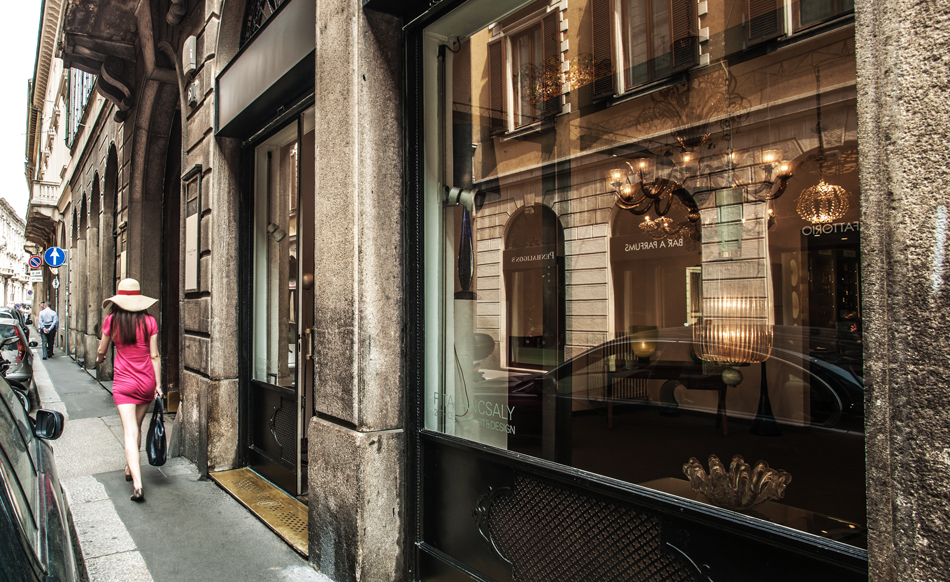 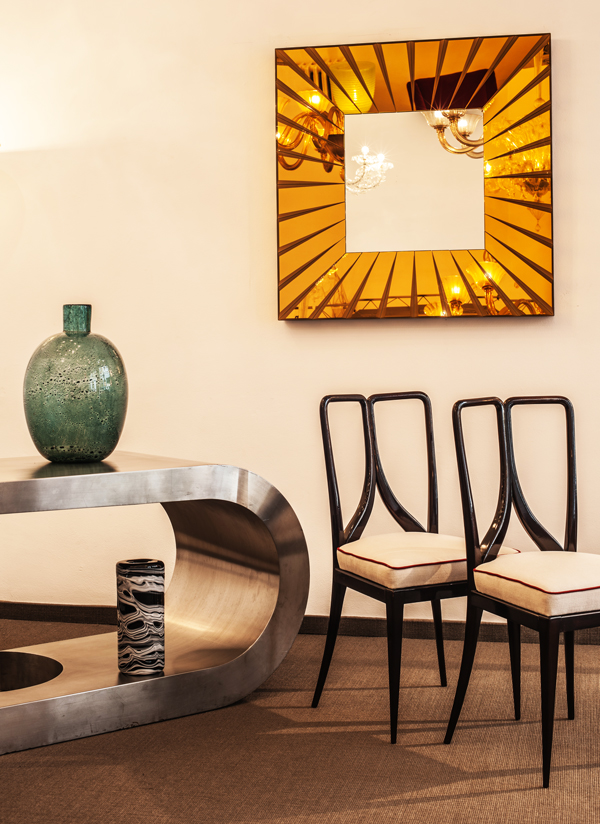 The Zaffiro vase by Ercole Barovier sits atop Marzio Cecchi’s Diapason desk, 1960s, with mahogany chairs by Guglielmo Ulrich, 1940, and a mirror by Roberto Giulio Rida – one of the gallery’s rare
contemporary pieces.

“I was a little bit frightened, honestly,” Fancsaly says of her entree into the field. “Glass is beautiful but it’s also the most difficult, I think, to recognize what’s good or not good.”

Hence the importance of having Deboni on hand. The pair collects mostly from private palaces in Venice, former hotels around Italy and the occasional auction. She handles the selling and Deboni the buying, seeking out and acquiring pieces whose impeccable provenance can be proven with proper documentation and reams of archival evidence.

Fancsaly reports that the market today is doing quite well. “There was a kind of a pausa for several years with Murano glass, but now, it’s very much a revival,” she says. “A few days ago, at Phillips in London, they had unbelievable prices. Everything Italian, design, and especially with glass.”

Fancsaly, too, has more than a few fine pieces that command high prices. A recent visit found a glittering canopy of Murano chandeliers hanging from the gallery’s ceiling: a bright-colored-and-clear-glass circa-1930s floral piece from Fratelli Toso in one corner, a more prismatic and geometric pastel Barovier & Toso piece from the ’60s in another, with a golden-hued, smooth-lined Deco-tinged Barovier & Toso number right in the middle.

Down at eye level, a trio of Murano glass vases and urn-like table lamps in a variety of textures and hues sit on a white marble-topped oval table supported by a pair of conical bronze legs. Designed in 1959 by Angelo Mangiarotti, the table is unique, says Fancsaly, “because of the shape. Usually it’s round with just one leg. This one was probably made for someone who custom ordered it – I think it’s one of the nicest pieces from Mangiarotti.” 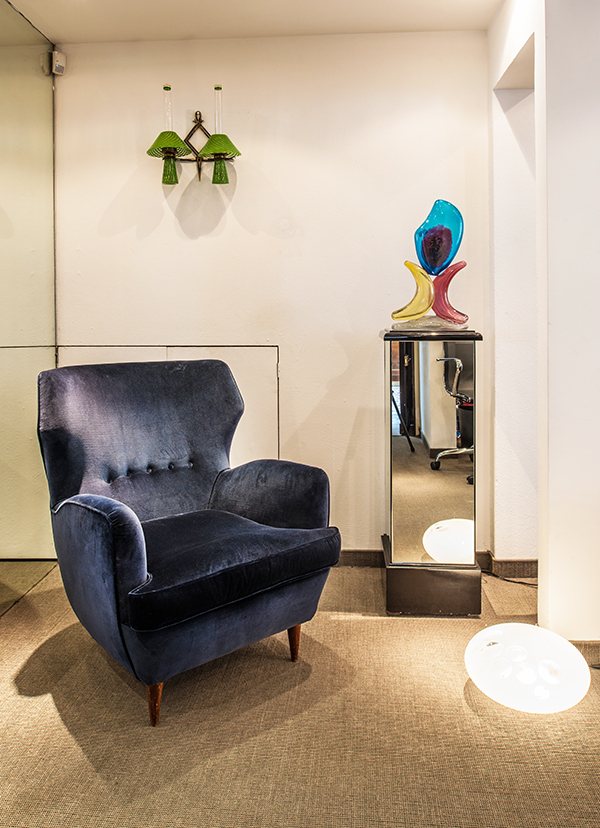 A 1950s velvet-covered chair (one of a pair) forms a vignette with a 1950 sconce from Seguso Vetri d’Arte and a 1952 Murano glass sculpture by Dino Martens.

Nearby, a pair of blood-red velvet armchairs by Paolo Buffa hold pride of place in the front windows, and a deep-blue-and-dark-green Venini floor lamp, designed by Fulvia Bianconi around 1950, stands sentry next to an opening leading into the gallery’s rear room. On the other side of this portal, a pair of sensuously curved, long-necked Venini vases from the ’50s top a sleek, ultra-mod writing desk made from a single, cantilevered curve of stainless steel-covered wood. Created by Marzio Cecchi in the 1960s, this Diapason desk “made a big noise at the time because of its very modern design,” says Fancsaly. “Cecchi died young, so if you mention his name, everyone thinks of this piece.”

Upstairs, smaller objects proliferate: a sampling of vessels from a 149-piece set of 1920s Pauly & C. table glasses, each one handblown, engraved and, incredibly, light as a feather; one of the decorative and highly textured farm birds made by Pier Antonio Zuccheri – son of animalist painter Luigi Zuccheri – for Venini in the 1960s; an acid-etched corroso vase by Modernist Italian architect and longtime Venini artistic director Carlo Scarpa.

Over the course of the gallery’s three decades in business, and thanks in no small part to Deboni’s stature, Fancsaly has established herself firmly in the field – so much so that she was the first and only dealer of Italian glass and Italian 20th-century design invited to the European Fine Art Fair, in Maastricht, the Netherlands. “We are small, but we have a name,” she says.

And while it may originally have been her husband who brought her to Venetian glass all those years ago, Fancsaly has become an unequivocal booster of the genre. “They had a genius, these designers,” she says. “From the very classical, they moved in a way that allowed them to make incredible works from the thirties on. They changed everything.”

Rita Fancsaly shares some thoughts on a few choice pieces. 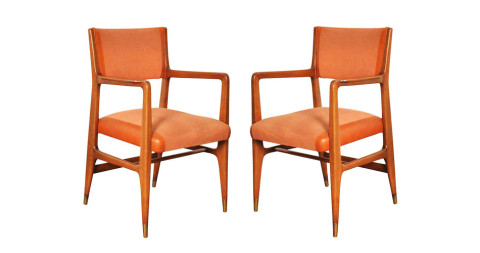 These salmon-hued seats, in walnut, fabric and leather with brass sabots, came about as a result of Ponti’s collaboration with Cassina, which began in the late ’40s. They represent unique examples of pieces that summarize the Cassina philosophy: innovative aesthetic, research on tradition and technical mastery. 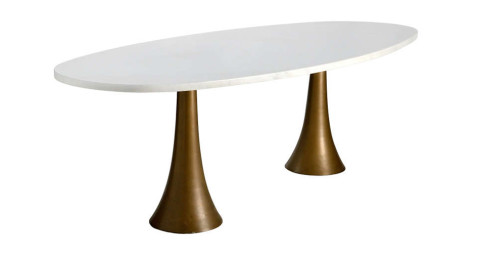 Mangiarotti made it his goal to reveal the essential characteristics of every object, which, for him, meant allowing an object’s materials to help determine its form. Domus featured this rare dining table, with a top of white Carrara marble and a bronze base forged in Milan’s Battaglia foundery, in a 1963 issue. 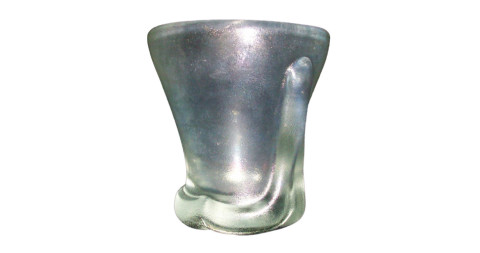 An architect by training, Scarpa began working for Venini in 1934, remaining the company’s artistic director until 1947. This piece is typical of Scarpa’s corroso a rilievi series, which features rough, irregular acid-corroded surfaces. It was first exhibited in 1936, at the sixth Triennale di Milano. 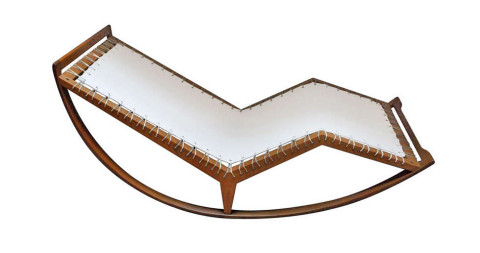 The Italian architect and designer Franco Albini designed this rare rocking chaise, which was manufactured by the company Poggi. Combining handcrafted techniques and industrial vision, Poggi focused on wood furniture with architectural structure — something immediately apparent in this piece, made of bent walnut, fabric and rope. Albini always displayed a commitment to rigorous craftsmanship and elegance built on a minimalist aesthetic. 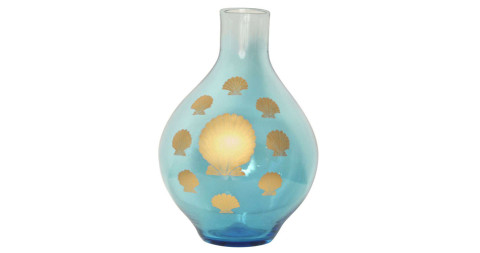 For Fornasetti, a single idea provided enough inspiration to create infinite variations. In the case of this blue-glass piece, decorated with gold and made for the Studio Ars Labor Industrie Riunite (S.A.L.I.R.), Fornasetti was exploring and playing with a shell motif. By allowing his imagination to roam freely, he was able to constantly reinvent or reinterpret an image. 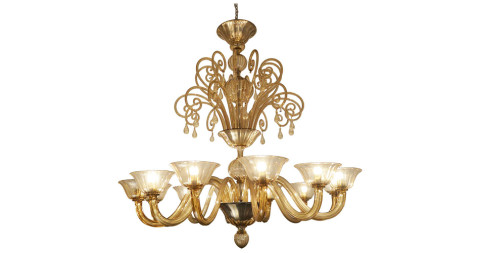 Barovier has a long history and a particular style that makes something new out of the traditional. This piece, with its pagliesco blown glass — a particular soft-yellow color used in Murano— elegant curves and drop-effect pendants on the upper arms has an Art Deco feel.