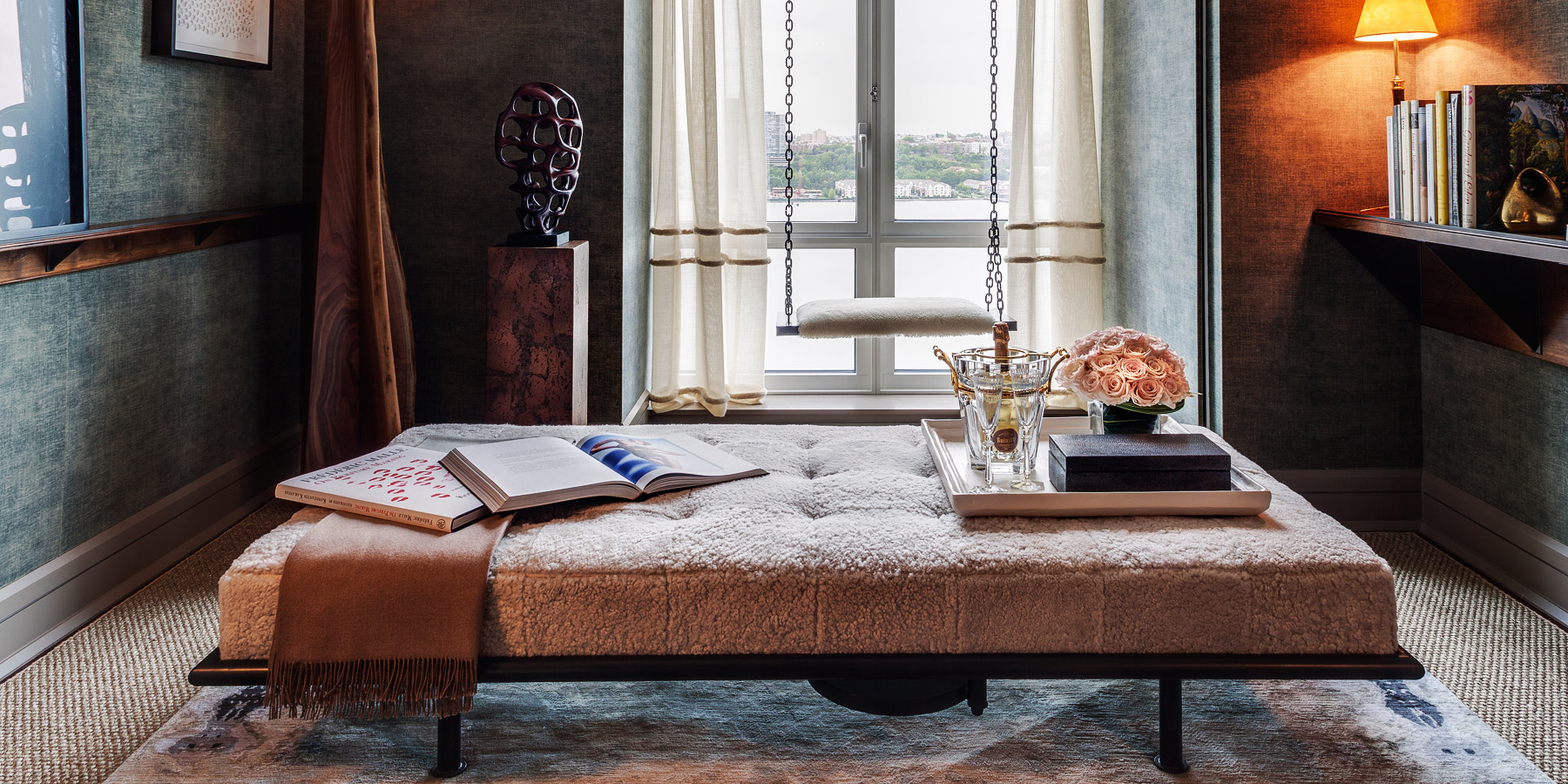 The Serene Interiorscapes of Shawn Henderson

From Lower Manhattan to Litchfield County, the interior designer 's projects showcase a calming, uncluttered aesthetic gleaned in part from a childhood spent exploring the Adirondacks. 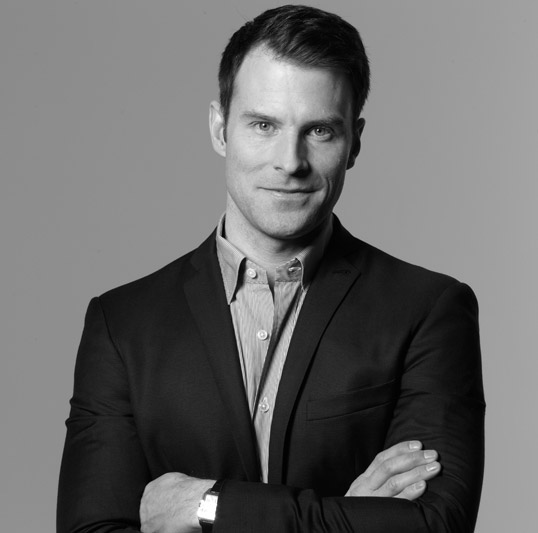 New York–based designer Shawn Henderson is bringing his serene style to residences from New York to Singapore. Top: For his room at this year’s Kips Bay Decorator Show House, he wrapped the walls in his favorite velvet by Brochier and added a swing with a fine river view.  Photo courtesy of Shawn Henderson

Shawn Henderson‘s first foray into interior design was ambitious in scope, if humble in materials: “I redecorated my bedroom when I was in eighth grade,” Henderson says from his studio in New York’s Gramercy Park neighborhood. “I was so excited because I had found a Liz Claiborne comforter set at some place like TJ Maxx. It was charcoal gray and red with a teal stripe, and I bought an extra set of matching sheets, out of which I made draperies. There were also these two red sashes as drapery tiebacks.”

These days, the spaces Henderson creates for an impressive roster of clients (including actor Glenn Close and racecar driver Jimmie Johnson) no longer have quite the same dyed-to-match quality as that original bedroom. But they do retain a certain feeling of unity, one that the designer describes as “a harmonious balance between what’s happening decoratively and architecturally.” He credits much of this sensibility to the time he spent camping in the Adirondacks when he was younger. “It’s all about the purity of the environment there,” he explains, “so clean and crisp and beautiful. In my interiors, I try to evoke that same wholeness, calmness and serenity.” 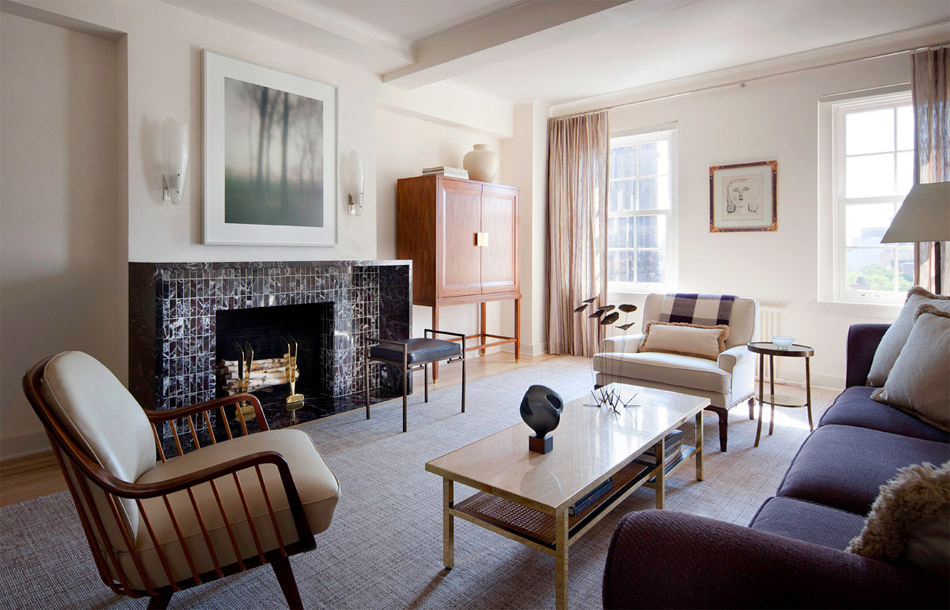 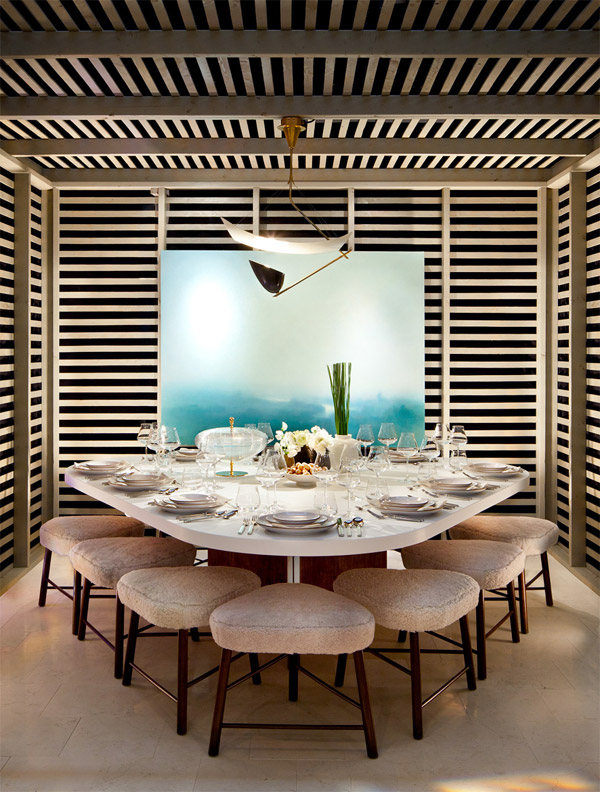 Shawn Henderson’s room for the 2012 Dining by Design event, benefitting the nonprofit DIFFA, featured stools and a table of his own design.

A modern classicist with a bit of a Zen streak, Henderson, 40, is not afraid of a little whimsy, either. Witness the chair swing he installed in his room at this year’s Kips Bay Decorator Show House. Nor does he shy away from commissions on a grand scale or with logistical challenges. One project in Litchfield County, Connecticut, required that he redo a centuries-old farmhouse in a matter of months, while the clients were living in the United Kingdom. His current projects include a six-story 1847 Italianate townhouse in New York’s West Village as well as the buildings on an 82-acre former plantation in Mississippi. “I like making people happy in their homes,” he says. “I just like making homes. It’s kind of that simple, really.”

Henderson grew up in Upstate New York, one of six children of restaurateurs, and he thought he might follow his parents into the business. But after a year of studying hospitality management at a nearby college, he transferred to the Rochester Institute of Technology and began studying interior design. He never looked back. “I was obsessed with design school and was finally doing what I wanted to do,” he says, “I loved it. I craved it.” He credits school with refining his talent for drawing by hand, a practice he continues to this day.

His first job after graduating in 1994 was at a hospitality-design firm in Rochester, where the practical experience he’d gotten growing up in the restaurant world served him well. There, he was responsible for overseeing fast-tracked projects, both from the studio and on site. “These places were built out in three months,” he recalls. “I’ve always been inspired by how things are put together, and it was fascinating to see my drawings come to life so quickly.” 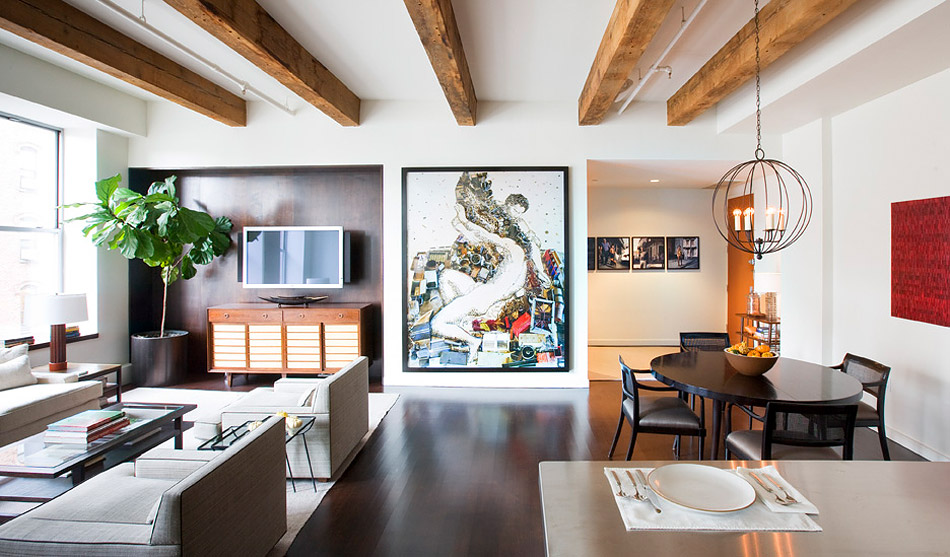 The living room of a loft in Chelsea exemplifies Henderson’s penchant for harmoniously balancing decoration and architecture. The large artwork (center) is by Vik Muniz. 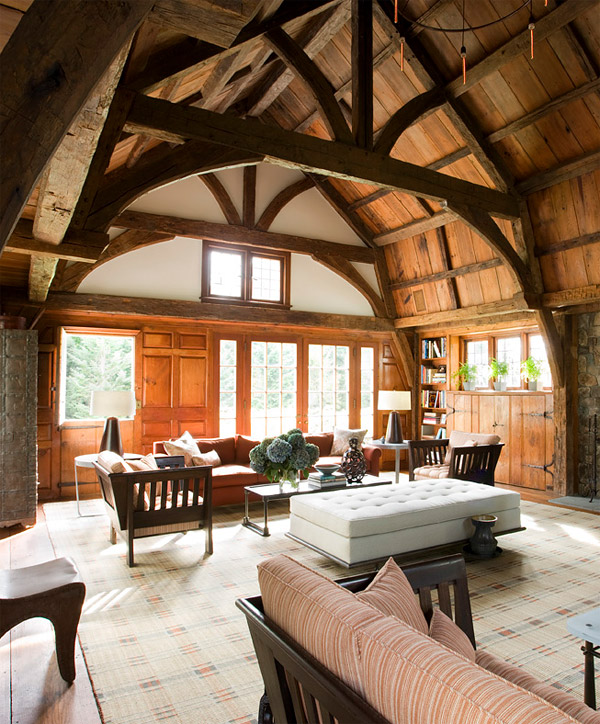 A capacious room made from a converted barn was added onto an 18th-century farmhouse in Litchfield, Connecticut. Henderson embellished it with a custom daybed and sofa, and 1920s Paine furniture.

Jobs with Birch Coffey and Thad Hayes, two New York City firms specializing in high-end homes, followed, and by 2003 Henderson had started up a residential-design outfit of his own. “At first, of course, I panicked,” he admits. “But soon I had a few clients and plenty of work, and after a year and a half, I hired my first employee.” Today, Henderson has nine people working for him on 20 different projects. Along the way, he’s been published in O, The Oprah Magazine and House Beautiful, which selected him as one of its leading 25 Young Designers a few years back, as well as House & Garden, which named him one of its Top 50 Tastemakers in 2007.

That last accolade connected Henderson to the owners of the Connecticut home, an 18th-century clapboard farmhouse on a beautiful plot of land “with great architectural details that any designer would go crazy for,” says Henderson.

“I found Shawn on the H&G list and then went to his website and loved it,” recalls the young client, who, with her financier husband, was moving back to the New York area after a long stint in London. “He’s the only person I interviewed. I couldn’t find anyone else who was doing what I wanted — something contemporary but still acknowledging that we’re in the middle of the country with a house that has these great old bones.”

Henderson’s portfolio suggested he could deliver just that, and they clicked upon meeting. “He’s so incredibly warm and casual but also confident in what he’s doing. He seemed like he’d be a fun person to be on the journey with,” she explains. “And he got what we wanted very early on.”

The clients’ primary inspiration was a favorite hotel: Kauri Cliffs, a boutique property on New Zealand’s North Island owned by hedge-fund tycoon Julian Robertson, where a serenely neutral palette is combined with a sensitive use of natural materials, especially wood. In Connecticut, Henderson spun this into something with a contemporary Shaker feeling — crisp white walls and exposed original rough-hewn wooden beams and ceilings serve as a perfect backdrop for a carefully selected mix of furniture (both new and antique) and the couple’s ever-expanding collection of contemporary art by Christian Marclay, the Chapman brothers, Sarah Morris and Catherine Opie, among others. 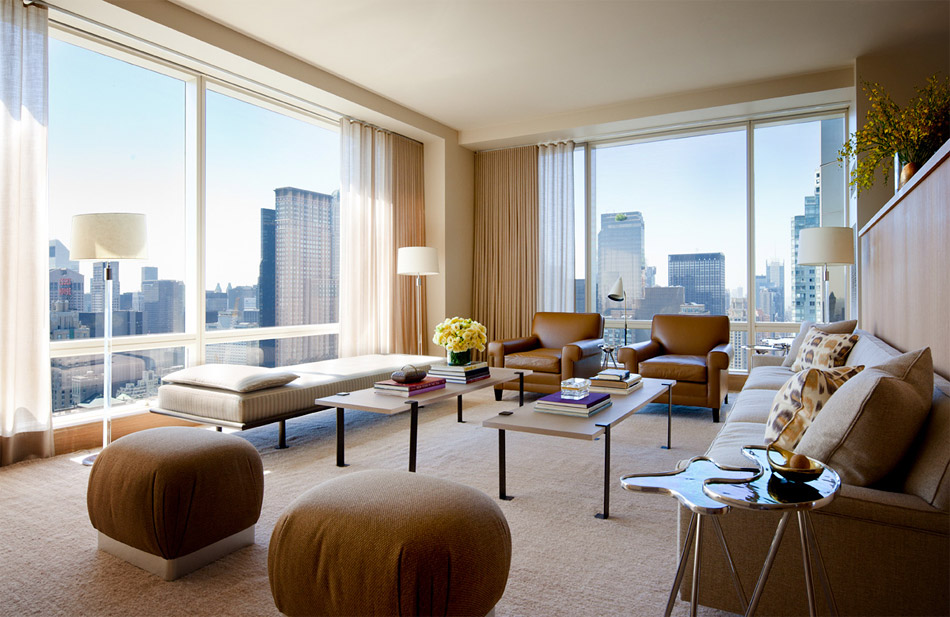 A New York home overlooking Central Park features a daybed and coffee tables designed by Henderson alongside a blend of vintage furniture. 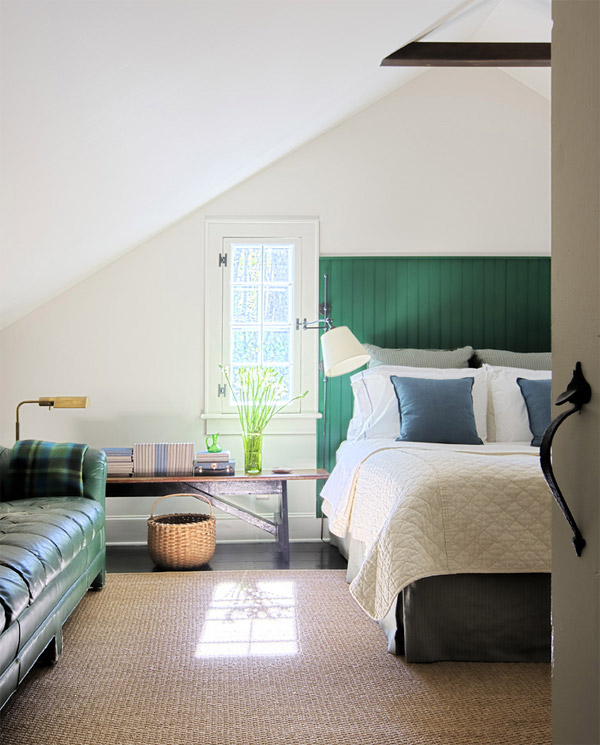 Henderson furnished his own cottage in Upstate New York with a vintage sofa re-covered in green leather and a headboard painted to match.

For the West Village townhouse currently under construction, the clients turned to Henderson for the second time; he’d previously done the couple’s Flatiron loft. “We met a lot of folks, but we had great chemistry with Shawn, and we loved his aesthetic,” says one of them, a Manhattan publishing executive. “He has a really strong design sense, but he’s also flexible. His architectural background underpins his understanding of spatial relationships, which he marries with a keen sense of history and furniture and what works with what.”

Here, Henderson has been tasked with the mission of gutting all six floors of the townhouse, bringing it back to its original mid-19th-century layout and injecting a contemporary aesthetic. “It’ll have a modern feel that works with the way we live,” says the client, “as if we’d bought an old home that had never been touched and then pulled in our art and furniture.” As for what some of those pieces will be, the client says, “Shawn likes to find things, but he also likes to design things, which I find really fun — much more fun than the pure decorating or shopping side of things.”

Henderson has, in fact, created a line of furniture called the Amalgam Collection, available through ALT for Living in New York. “It stems from the way a lot of people live these days, the formality isn’t there,” the designer says. “For better or worse, we’re eating at the coffee table, lounging there, too, with plate and computer all together.” So Henderson has created ingenious but deceptively simple pieces like a daybed with side tables that swivel out and a deeply padded upholstered chair with a wooden frame and arms flat and wide enough for a drink to rest on. “It’s all about being multifunctional. Mid-century Italian furniture has that and the Scandinavian pieces I love do, too. When it becomes more than just a pretty piece and greatly serves a real function — combining engineering and design at the same time — that’s what I’m particularly interested in.” 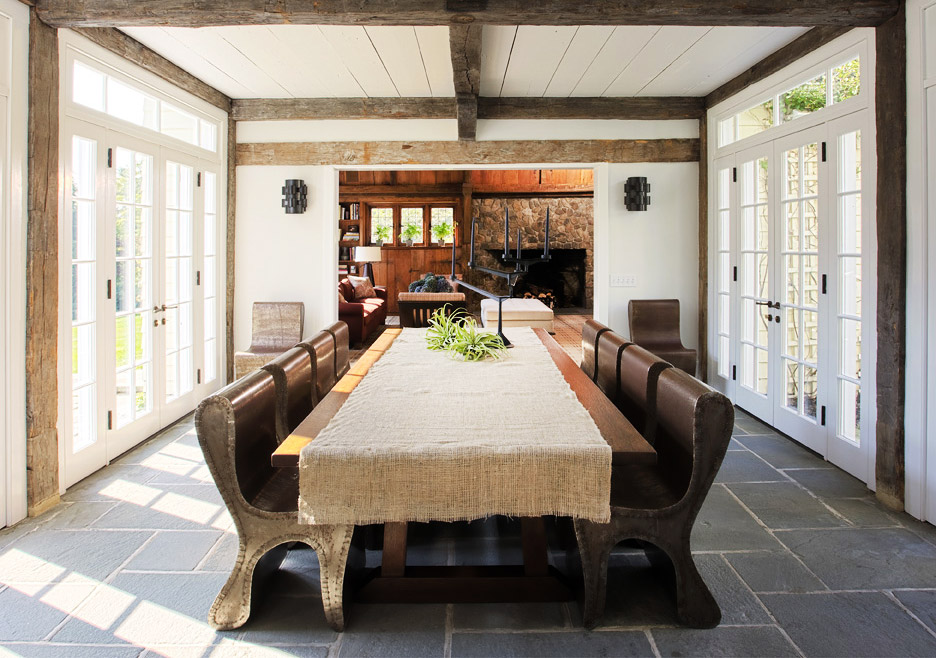 The dining room at the Litchfield house features Pierre Abadie chairs, a vintage Stickley table and a Tom Dixon candelabrum.

As for what else interests Henderson these days, there’s a big project for clients in the Hamptons as well as plans to renovate his woodsy country place Upstate, which he shares, in addition to a Manhattan apartment, with his partner, Jess Cagle, the managing editor of Entertainment Weekly. And he’s setting his professional sights abroad, too. Recent jobs took him to London and Paris and then on to Singapore when the Paris client commissioned him to take on his new apartment in a high-rise building where Christian Liaigre had designed all the finishes.

“I would love to do more projects in Asia — Singapore, Hong Kong, Shanghai,” says Henderson. “While working in Singapore, I’ve traveled to Bali and Cambodia and found them incredibly inspirational — the people, the culture, the color, the design. There’s so much to explore. It’s an escape for me because it’s so outside of what I do, so saturated with detail and color and ornamentation. But it distills itself and then reveals itself in my work. I never know exactly how it’ll all come out, but it always does.”