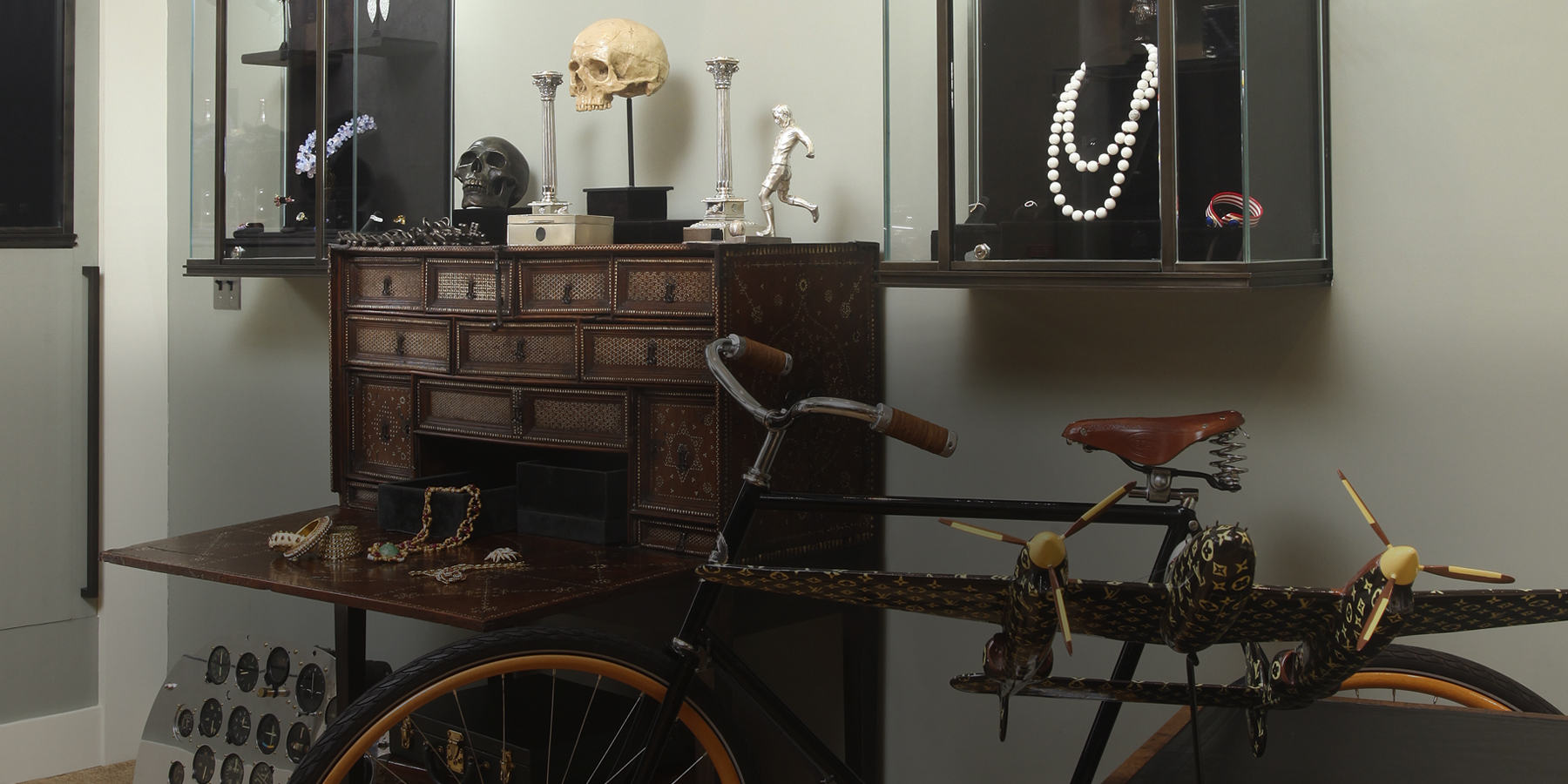 A longtime auction-house specialist — he ran Christie’s jewelry department in New York City — this British-born connoisseur of priceless, glittering baubles of all kinds now presides over a Greenwich, Connecticut, shop, where he indulges his passion (and those of his high-flying clients) for antique and estate jewels with contemporary cachet. 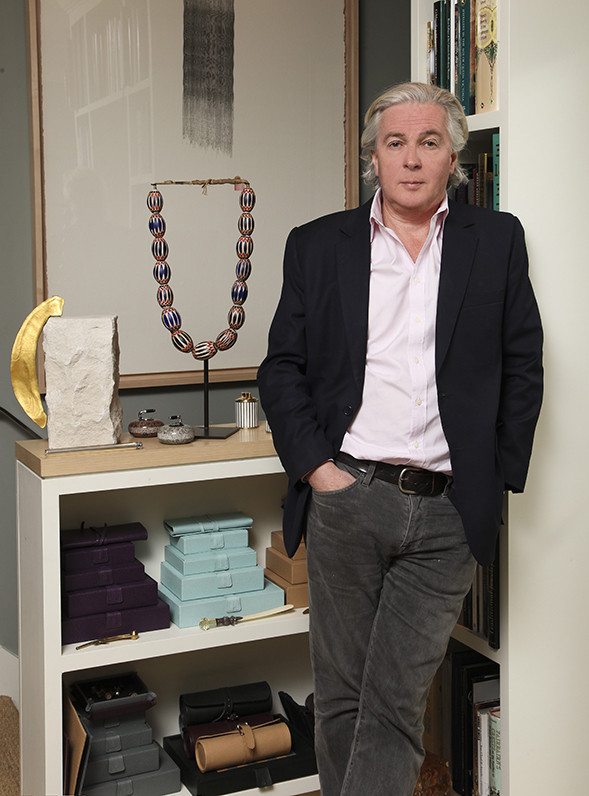 Simon Teakle is the quintessential English gentleman: distinguished, discreet, impeccably mannered and ineffably charming. He also has the perfect pedigree for an antique-jewelry dealer, having worked for 20 years at Christie’s, first in London and then in New York, where he ran the auction house’s jewelry department. So when Teakle branched out on his own two years ago as a dealer in vintage and fine jewelry, the genteel, New England town of Greenwich, Connecticut, proved the ideal location.

Before setting up his eponymous shop, however, he first worked in Greenwich for the noted jeweler Betteridge, starting in 2004. Then, in 2012, “The stars were aligned, the right opportunity came along, and the timing worked in every respect,” he explains. “I had been wandering around Greenwich with my wife, looking at buildings, and I just kept coming back to the same space, a nineteenth-century building, within sight of Greenwich Avenue, that had been part of the old Greenwich fruit and vegetable market.” The one drawback of the space, at 4 Grigg Street? It was already occupied (coincidentally, by a working jeweler). Teakle’s wife, Juliet, decided to go inside, look around and talk to the goldsmith, who told her, to her surprise and pleasure, that he was about to leave the premises. “Within three days,” Teakle says with a laugh, “I had a ten-year lease, my own shop and absolutely no business plan.”

He began by completely gutting the boutique, creating a discreet salon with a comfortably cool, club-like style and sleekly modern vitrines, all expressly designed to display antique and estate jewelry in a contemporary setting. “My aim has always been to show clients that antique jewelry is wearable and modern, that it makes the right statement with today’s fashions,” Teakle says. “It’s the perfect complement to, say, a Prada dress.” 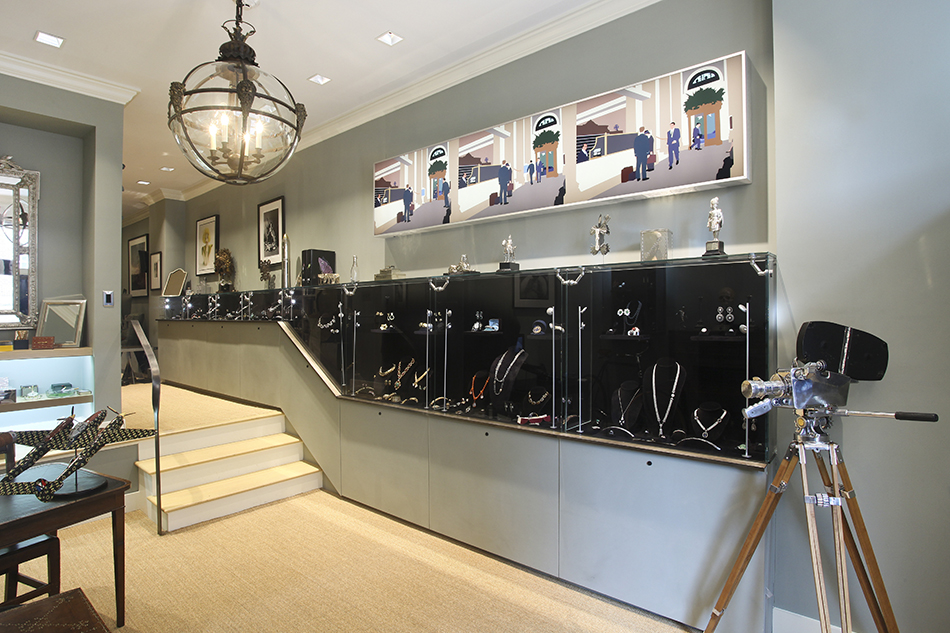 Teakle’s gallery is housed in a 19th-century building that was once part of Greenwich’s fruit and vegetable market. 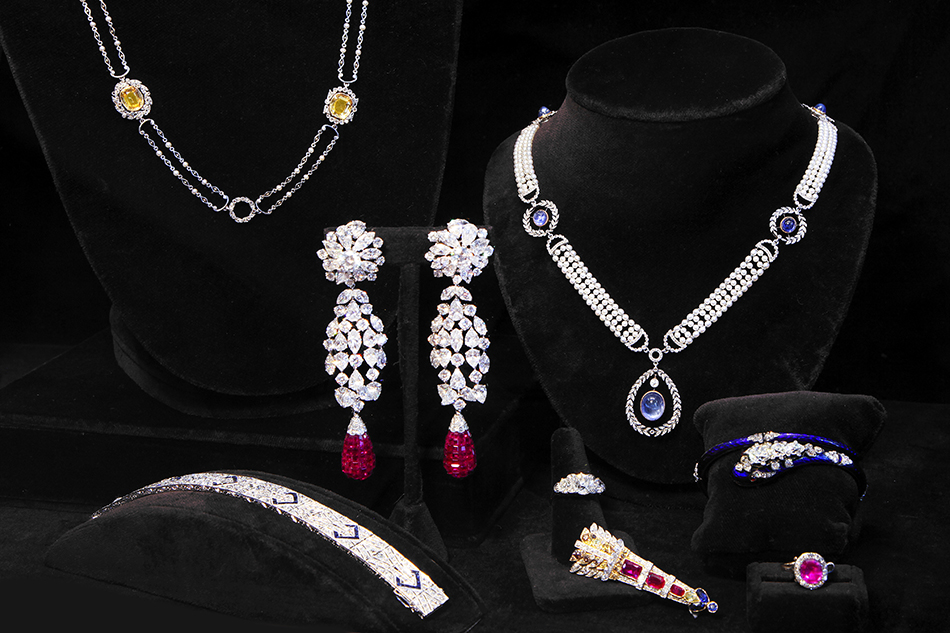 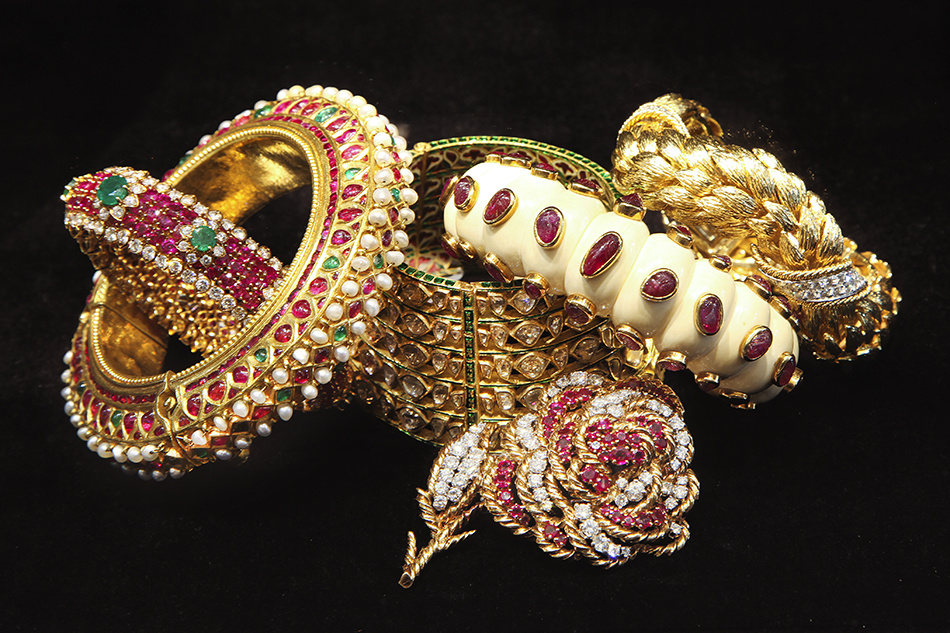 Another grouping includes a 1960 ivory bracelet by David Webb and an Indian bangle with seed-pearl accents, ca. 1820 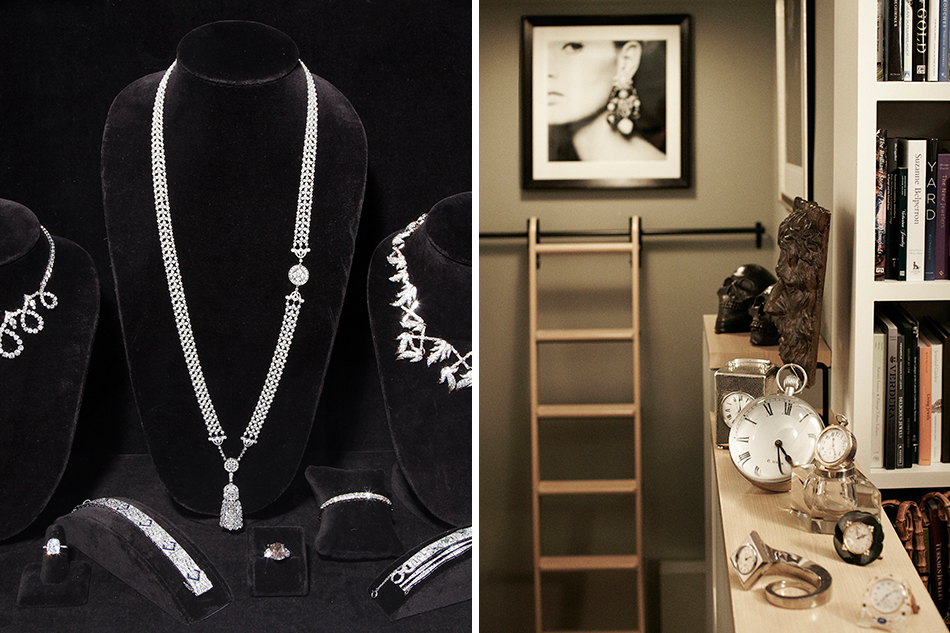 Left: A Belle Epoque pearl-and-diamond sautoir by Dreicer with a tassle-style pendant, ca. 1910, is flanked by a looped-motif diamond necklace ca. 1950, and a diamond necklace by Schlumberger for Tiffany, ca. 1965, that resembles interlocking leaves. Right: Teakle offers a stock of tabletop items and clocks – including an Edwardian silver-and-glass clock atop an inkwell from Sheffield, ca. 1907, and an unusual curved chrome 1970s Gucci clock – with husbands, sons, fathers and boyfriends in mind. 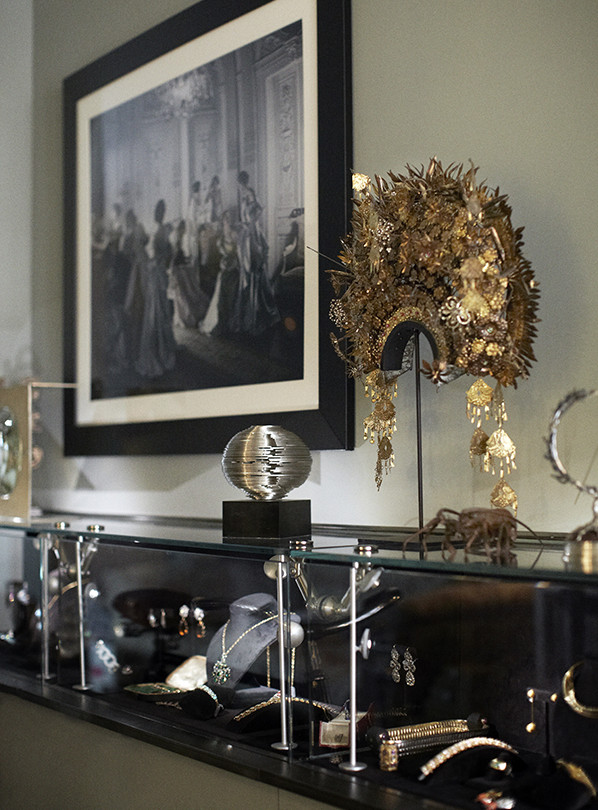 Perched amid decorative ornaments of various provenance, a Balinese headdress holds pride of place atop one of Teakle’s sleekly modern, custom-designed vitrines.

There is, unsurprisingly, a distinctly English feel to the shop, with its muted Farrow & Ball colors; its classic 1950s, ’60s and contemporary fashion photographs; its large sofa covered in rough Indian silk; and its rolling library ladder and stately book- cases. A stunning 18th-century silvered mirror comes from Wardour Castle, the ancestral Dorset home of his wife’s family, the Arundells. “There are lots of personal touches,” he explains, “a myriad of objects similar to those we have at home.” Teakle wanted the shop to be intimate and low-key, to allow people to, he says, “discover” its magic as they move through the space — which explains why there are very few jewels displayed in the shop windows.

Teakle says the uncluttered, modern setting ensures that every jewel or jewelled object on offer has a “relevance to its contemporary existence.” Bringing the past into the present in such a dynamic way — with style and taste and an awareness of current fashions, all backed up by knowledge, expertise and academic research — is a special focus of Teakle’s, one that evolved from the serendipitous start to his working life, as a junior porter in the silver and jewelry department at Bonhams, the London auction house. Teakle, who was brought up in Lewes, Sussex, and educated at Eastbourne College, explains: “After a not particularly distinguished academic career, I thought I’d like to try working in an auction house. It was fortuitous that Bonhams put me in the jewelry department, rather than, say, furniture or Old Masters, because I became completely hooked.”

From there, he moved to Christie’s, where the well-respected and much-loved jewelry expert Albert Middlemiss was his mentor. Middlemiss taught him to appreciate every jewel that came through the department, whether grand and aristocratic or small and humble. This training explains the unusually broad but also carefully curated and intensely personal selection of jewels Teakle offers today. He chooses each piece himself, looking for those with style, personality, quirkiness and craftsmanship. 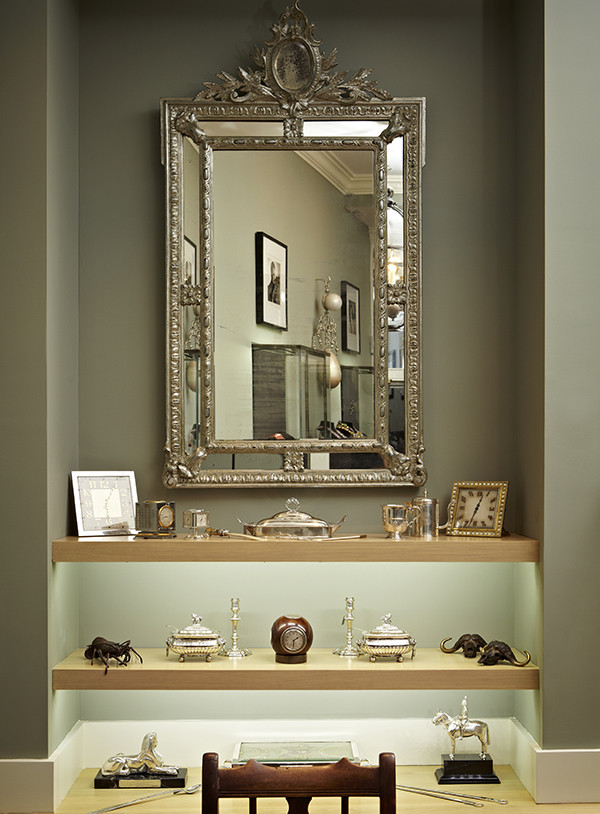 Non-jewelry items on offer include, from left on the top shelf: a weather station clock by Auricoste, ca. 1930; a George III silver warming dish, 1778; a desk clock by Cartier, ca. 1930. A pair of George II silver candlesticks by John Café, ca. 1740, and George III silver tureens by Solomon Hougham, ca. 1787, sit on the shelf below.

“My auction background means that I select pieces from right across the board,” Teakle explains, “from all periods and styles, and across all price ranges — from a pair of Van Cleef & Arpels earrings, for example, for perhaps half a million dollars, down to a nineteenth-century emerald-green Vauxhall glass cross pendant for, say, eight-hundred dollars.” He concludes:. “Beauty and rarity don’t have to cost a fortune.”

At any one time, you might find in the shop a string of early trade beads from Cameroon, an 18th-century paste pin, an elegant Regency agate necklace, a glamorous mid-20th-century gold-and-diamond bracelet by Boivin or a contemporary treasure by JAR, Daniel Brush or Taffin by James de Givenchy. Teakle also creates pieces of his own design from exceptional gems, and occasionally alters an antique jewel — re-mounting a 19th-century diamond bird pin on a bangle, for example, to preserve its integrity and make it that much more modern, wearable and dramatic.

Alongside the jewels, Teakle likes to keep a selection of quirky, unexpected objects ideal for gifting. “So many women want to buy something for their husbands — fun, not-too-expensive objects for the office or den that you can’t find anywhere else,” he says. For instance? How about a huge and heavy jumble of antique keys on a massive key ring, a 1940s aircraft panel or an Hermès clock dating from the 1930s?

Many of Teakle’s clients are scattered across the globe, but just as many are local, often young and from the world of finance. (Greenwich, known as Wall Street’s bedroom, has perhaps the highest concentration of hedge-fund managers in the world). They are, he says, well-informed and eager to learn, quick to develop taste and acquire expertise. And Teakle clearly takes great pleasure in sharing information and knowledge — his people skills match his jewelry expertise. “In this business, it’s all about relationships,” he says. Relationships and remarkable jewels, that is. 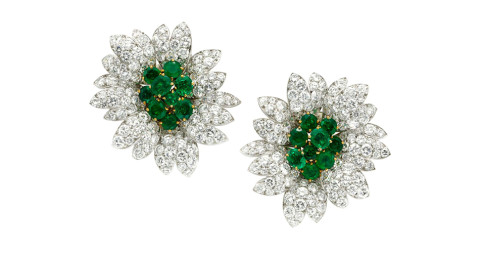 These dramatically large, naturalistic flower earrings, typical of Van Cleef & Arpels in the 1950s, combine glamour – in terms of scale and important gemstones – and romance. I think the ’50s were a very romantic era in jewelry. Van Cleef & Arpels is a very desirable name, with universal recognition and appeal, and that infers quality and style. 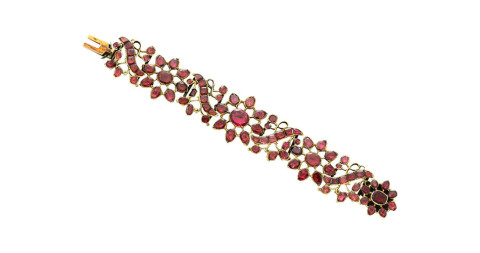 What I love about this bracelet is that something so old is still eminently, spectacularly wearable. It is set with flat-cut almandine garnets, so typically and charmingly 18th century, in a fluid, feminine ribbon design. This is absolutely where antique jewelry meets contemporary design. 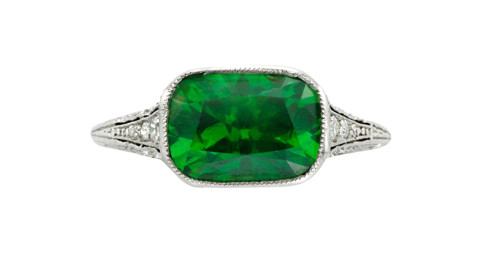 At three carats, this superb and rare green demantoid garnet is an unusually large example of its kind and quality, a stone that was discovered in Russia, in the mineral-rich Ural mountains, in 1868. This stone has the classic horsetail inclusions, a stamp of authenticity. It has been set, probably in France or England, in a typically elegant Belle Époque platinum mounting, which I love for its lightness, refinement and finesse. 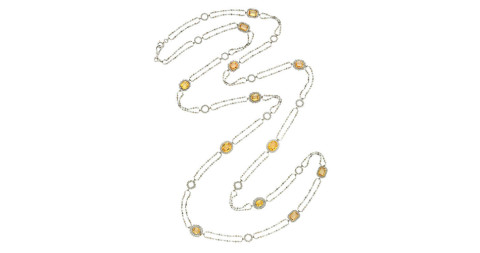 This is a real “flapper” necklace, over four feet long, finely crafted and superbly articulated to move with the body. It is set with diamonds and gloriously deep sun-colored precious topaz, with accents of small natural pearls. It fits perfectly with today’s mood of informal glamour. 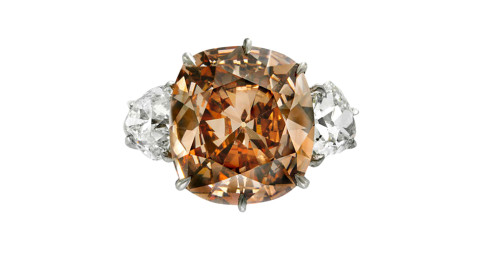 I bought this stone for its extraordinary color and strong personality, and then I had it made into a contemporary ring, mounted in steel and rose gold, to bring out its warmth and modernity. I find the combination of color and brilliance in this diamond irresistible; there’s something mystical and enigmatic about colored diamonds. They can be quite magical. 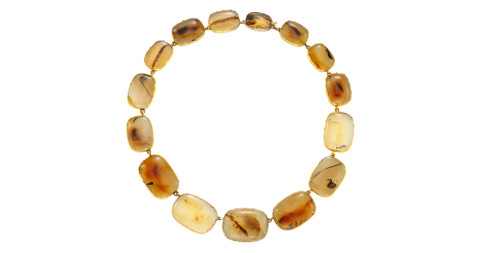 This necklace is the perfect illustration of how wearable – and contemporary – antique jewelry can be. It’s simple and minimal, yet delicate and fresh, with great refinement in the choice and arrangement of the agates, whose markings are rather like modern art.