The Glamour! The Drama! Entire Interiors Covered in Mirrors! 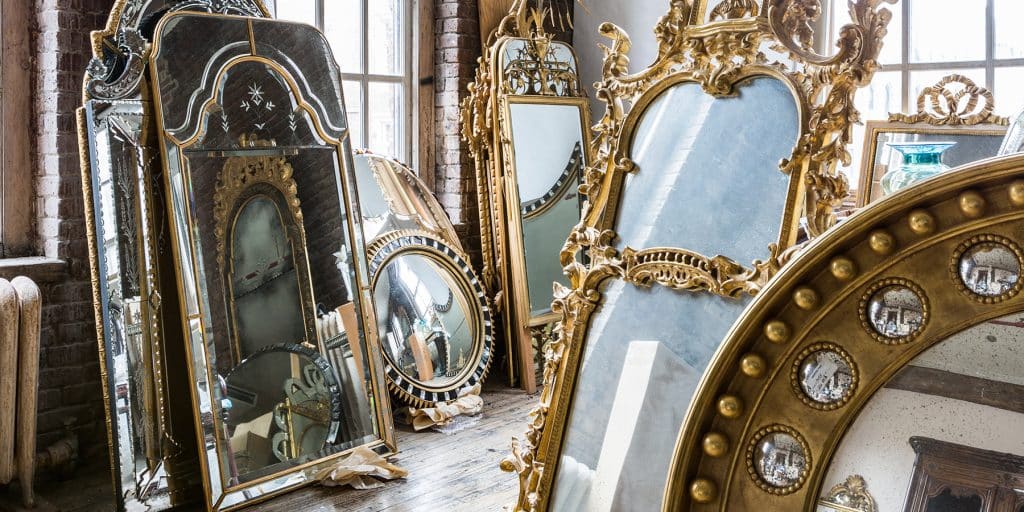 To step into the Manhattan atelier of Stephen Cavallo / Mirror Fair is to enter a glittering new world. 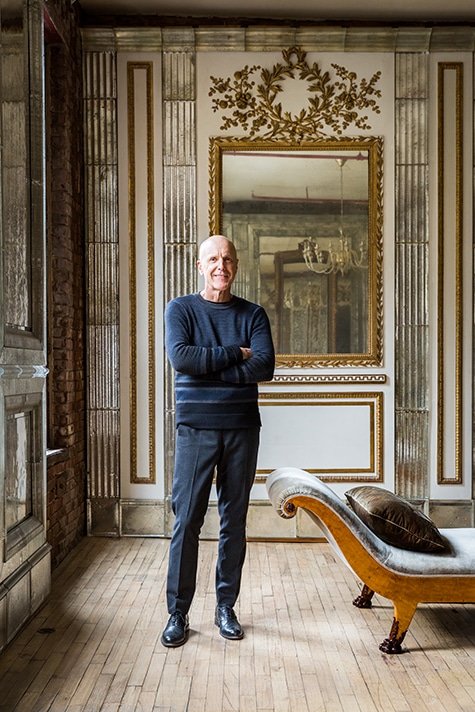 November 27, 2017Stephen Cavallo is the third-generation owner of a family business specializing in mirrors and mirrored panels created using traditional techniques. Top: Gilded, etched and antiqued mirrors lean against the walls of his studio.

Once you’ve climbed the scuffed stairs, you have to use your shoulder to budge the weighty steel door to Stephen Cavallo’s atelier on Manhattan’s Upper East Side — then you catch your breath. A shimmering 18th-century hall of mirrors seems to have suddenly replaced the gritty urban space you just occupied. Turn, and the far corner is like a luminously paneled stage set for a play requiring a 1930s Parisian pied-à-terre complete with jazzy mirrored fireplace styled after mid-century designer Serge Roche. “It’s deliberate,” Cavallo says of the tableau’s theatricality. “We like to see the look on people’s faces when they walk in.”

The third-generation owner of Stephen Cavallo/Mirror Fair, Cavallo wasn’t always sure that these gleaming panels, glass moldings, silvery columns and pilasters would be well received by a contemporary audience. Around six years ago, though, it dawned on him that he could cast shapes in glass (just as you could in plaster or metal), and he was struck with a vision of whole mirrored interiors replete with molded-glass architectural detail. “I didn’t know where it was going to lead,” Cavallo recalls. “Things got grander and grander. But remember, no one was standing in line to buy this from me.”

He was thoroughly aware that the furniture business is ever vulnerable to shifting trends and fickle taste — and a new idea could mean survival. The firm, founded in 1911 by his Italian grandfather, originally imported antique furniture from Italy. But as unsold stock piled up in the warehouse, Cavallo’s father, Stefan (who also happened to be a test pilot), realized that the way forward was to start reproducing the antiques that sold best. 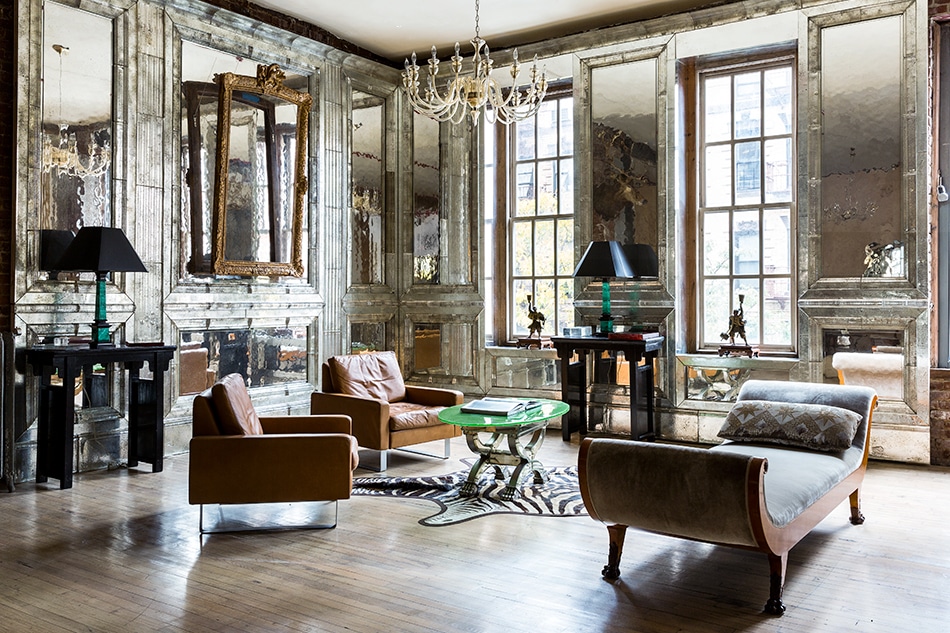 Cavallo’s studio designed and fabricated the mirrored pieces in this room, including the cocktail table with an oval lime-green cast-glass top and antique X-legged base and the hanging Regency frame. The space also includes a pair of David Hicks leather and metal armchairs as well as an Austrian daybed and a Murano glass chandelier from Bernd Goeckler Antiques. 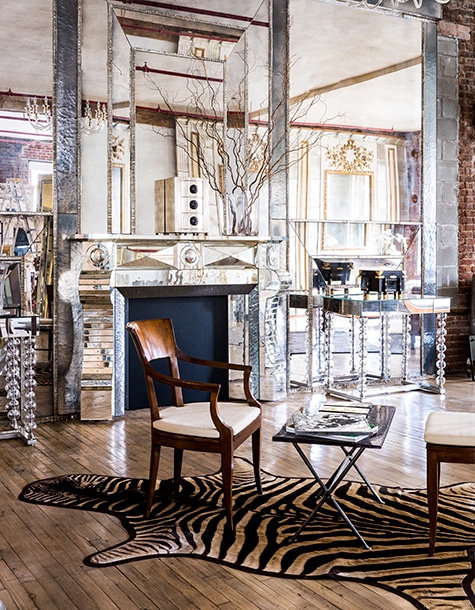 This mirror-paneled living room features a Serge Roche–inspired fireplace with antique watery mirrors around the hearth and silvered bull’s-eye mirrors set in each corner and the center.

During the 1970s, when designers started to create their own lines, that work declined and something new had to be found to keep the business afloat. By then, Stefan’s son Stephen was involved, and the plan to specialize in making high-quality antiqued mirror frames was put in place.

As interior designers increasingly began to ask for antiqued mirrors to match the quality of old-world frames, the Cavallos decided that it would be a good idea for Stephen to learn the techniques of cutting, polishing, hand beveling and silvering. “We could visualize exactly what that piece of antique mirror should look like because we came from that background,” Cavallo says.

Designer Brian J. McCarthy, with whom Cavallo has worked on a number of projects, calls the Manhattan workroom “a laboratory of glass.” Currently, a dozen artisans work at the atelier. They are experts in such traditional techniques as engraving, tinting and etching, while Cavallo devises the more experimental processes. Glass may be baked overnight on a ridged surface to produce a rippled effect, or a surface only partly polished to acquire the Mirror Fair hallmark Natural Finish, which Cavallo describes as a “soft, molten, distorted look.”

All mirror frames are carved and gilded in the workrooms, and glass moldings are fabricated on site. The mirrored surfaces are made by hand pouring a silver-nitrate solution onto previously treated glass and then carefully aging the silver to achieve the cloudy, pitted look of old mirrors. McCarthy, who alternates between calling Cavallo a magician and a mad scientist, says, “He has such a feeling for the material, and almost anything you dream up, he can realize.” 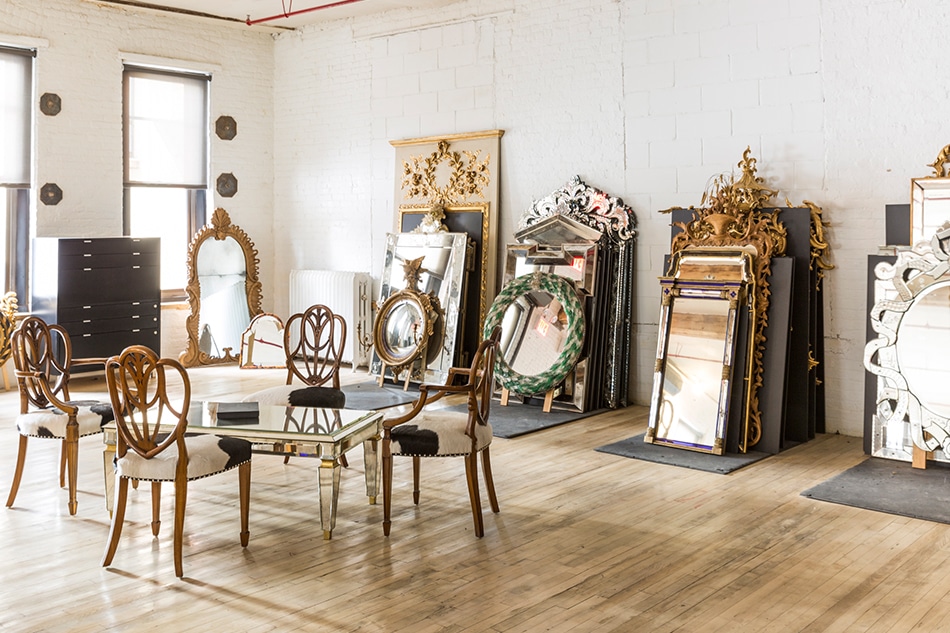 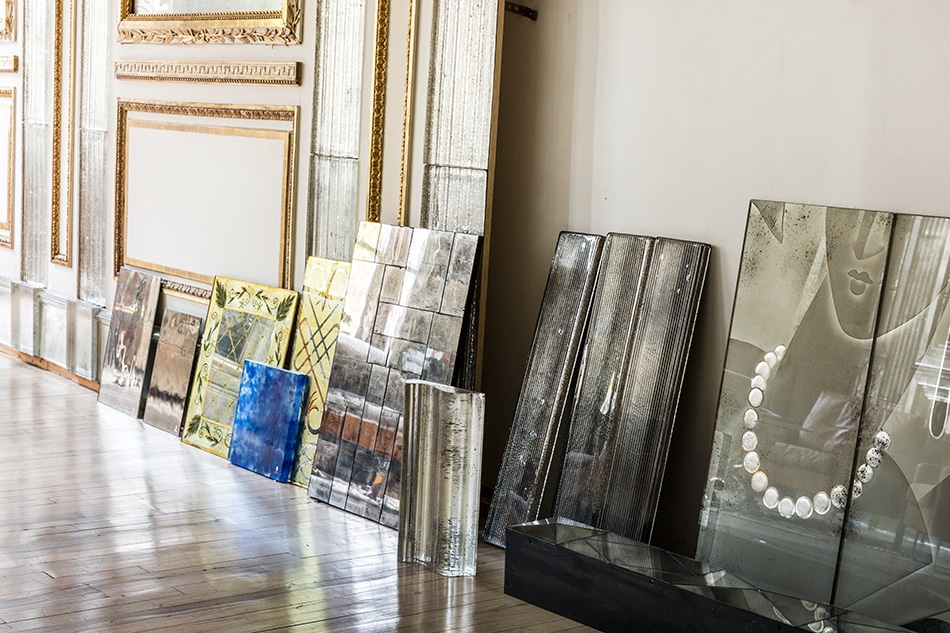 Some of the techniques employed by SCMF are represented in this collection of mirrors, which includes an antiqued, silvered, etched panel; cast-glass reeded mirrored pilasters; and an églomisé, rubbed-palladium-leaf mosaic panel. 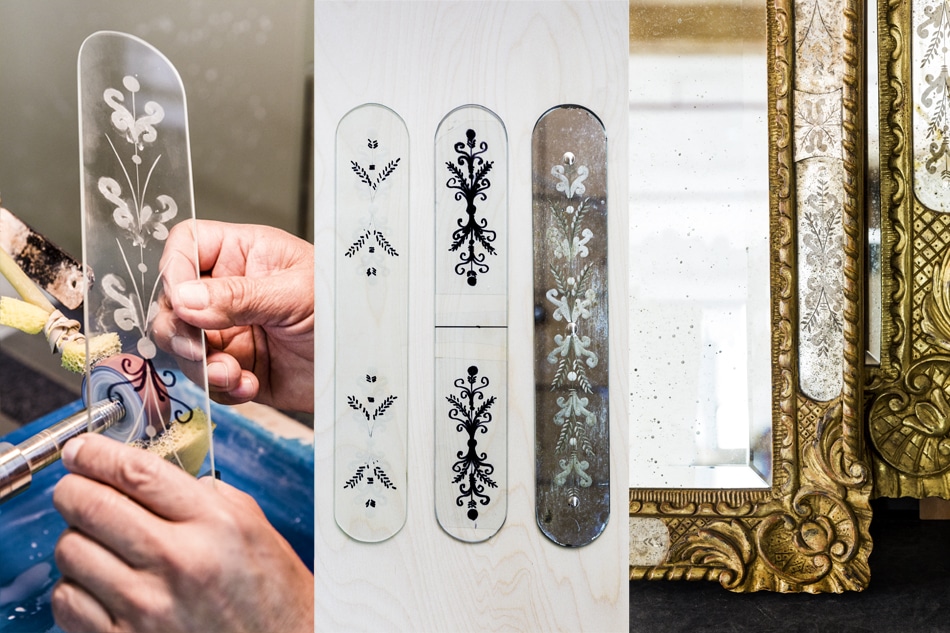 Left: A hand engraver creates a detail for the border panel of a Venetian gilt frame. The engraver uses a series of stone wheels to cut and shape the piece into the desired pattern. Center: This image shows the progression of the engraving process, from when the engraver traces a pattern onto the piece until it is finished with hand-poured silver, which creates an old-world mercury effect. Right: This section of a reproduction Venetian gilt frame displays how the frame maker, gilder and engraver worked together in creating it. 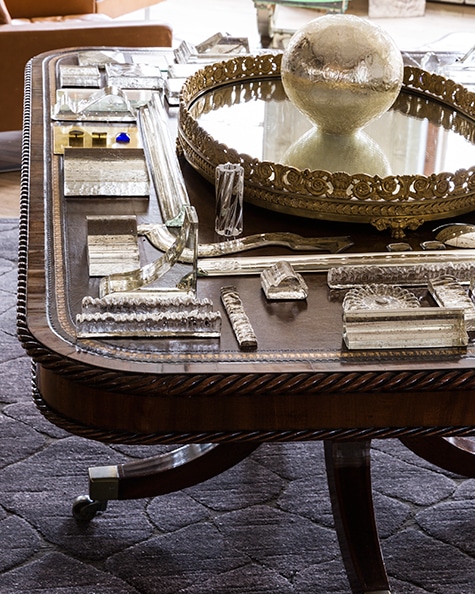 A handblown, rough-textured crackled-glass ball is displayed at the center of the plateau on this Regency leather-top table. Surrounding the plateau are several of the cast-glass designs and profiles fabricated in the studio.

Some of the projects for which Stephen Cavallo/Mirror Fair customizes its products are almost dreamlike — even startling. Somewhere in Gstaad is a traditional wooden chalet within which McCarthy has paneled multiple rooms on several floors entirely with a lustrous, watery mirrored surface. Another of McCarthy’s astonishing projects is a 360-foot yacht under construction in the Netherlands that will feature up to 10 heavy fluted-glass columns, as well as several pilasters and other mirrored surfaces.

Meanwhile, the demand for ornately carved frames has dropped as requests for mid-century sleekness has risen. Today’s bold statements are made by installing mirrored surfaces as room features. Designers are using them as surrounds for fireplaces or, as in a London project by Haynes-Roberts, as the glittering surrounds of four doorways in a Kensington Gardens townhouse. Sandra Nunnerley, who recently worked with Cavallo on a custom mirrored vanity for a client, says of the technique: “It’s very glamorous!”

The drama of mirrored panels and custom gilded surfaces has suited the firm’s products especially to commercial design. Bergdorf Goodman is a loyal client. It commissioned cast-glass molded surrounds for three store windows on 57th Street and one year ordered a constellation of hand-beveled crystal stars for a Christmas window display.

The current major commercial project keeping the atelier busy is a horseshoe-shaped bar counter to be installed in New York’s Four Seasons hotel early next year. Designed by Brazilian architect Isay Weinfeld, it measures some 18 by 15 feet and is cast in inch-and-a-half-thick glass with a bespoke golden-bronze industrial modern finish. Cavallo is dazzled by the undertaking. “Designers are more than just purchasers of products — they lead you down all these paths,” he says.

He then starts to describe another fantastical bar, for the yacht that McCarthy is designing. It’s going to be a mirrored surface partly sunk into a curved-glass pool over which the water will gently spill. Cavallo laughs and asks, “How could you not love this business?”

Stephen Cavallo shares his thoughts on a few choice pieces 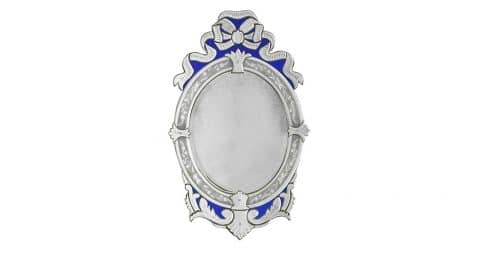 “We silvered the royal-blue glass in this reproduction of an eighteenth-century Venetian-style frame, which was originally manufactured in France. It’s not a ‘pure’ mirror — there’s a little bit of fantasia in it.” 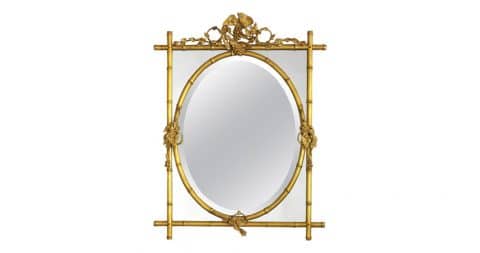 “We found this is very elegant Louis Philippe gilt-bamboo frame with a grape leaf and vine design in a French flea market.” 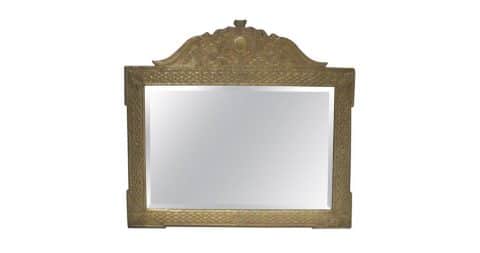 “I could picture this in a retro restaurant in Brooklyn. It is created using the repoussé technique, in which the negative of a pattern is carved into a wooden mold and the tin is hammered into it to create the positive, then mounted on a wooden frame.” 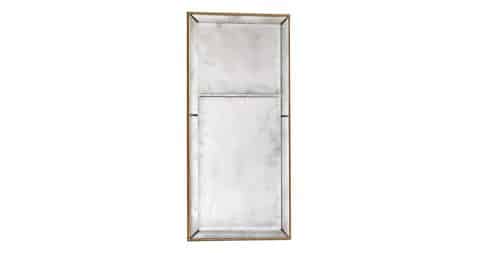 “Even though this mirror is clean lined and simple, it is very Louis XVI. It could be used to soften up a modern interior.” 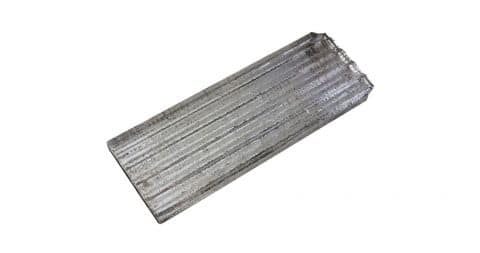 “A hand-cast mirrored-glass molding replicates a column segment from ancient Rome or Greece. The back is treated with hand-poured aged silver and only partially polished to a softer luminosity called Natural Finish.” 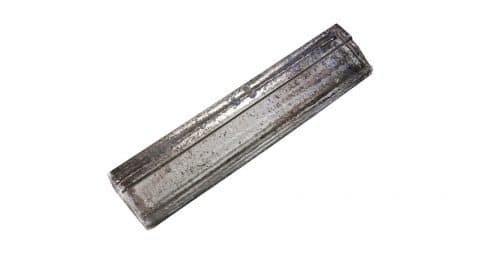 “This hand-cast glass molding is a classically molded shape with an ogee profile, which first appeared in Roman times. It has an organic, uneven feel, which simulates old mercury silver.” 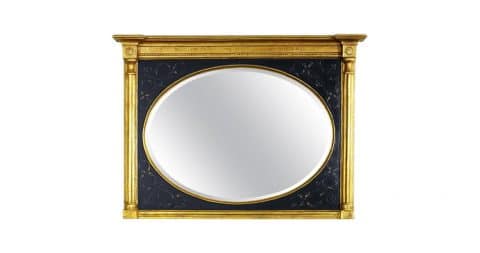 “I particularly like the strong, masculine lines of this small Federal-style over-chest mirror, with a beveled center and hand-painted gold filigree in each corner.” 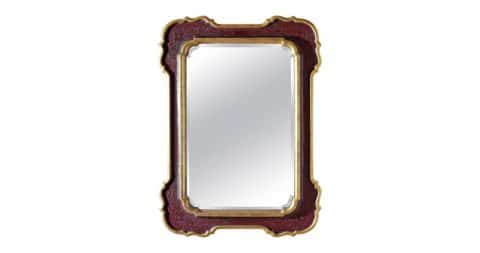 “The original of this unusual mirror is Spanish, nineteenth century. It stands out because of the intricately embossed leather frame and the way the hand-beveled glass follows the faceted hand-engraved corners.”