Steven Gambrel Takes Us inside His Storied Projects 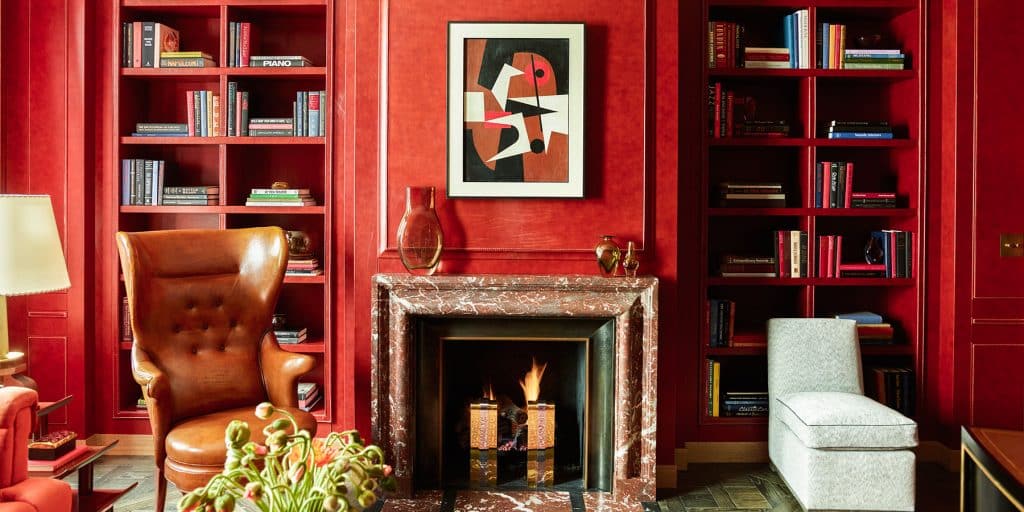 Thoughtful compositions, superior craftsmanship and attention to detail are the hallmarks of the New York designer's work. 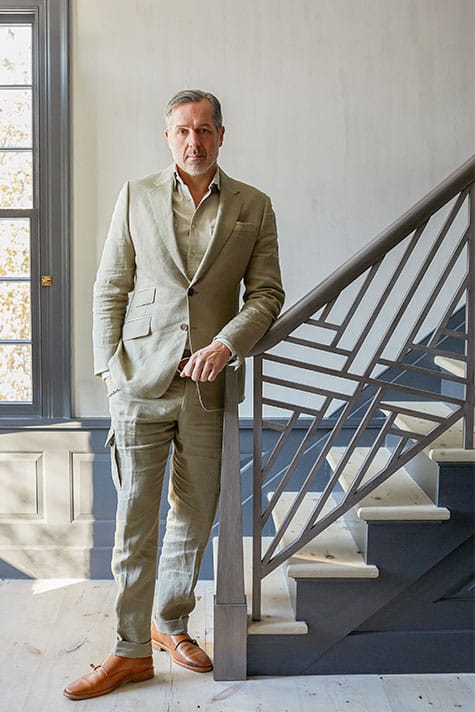 November 4, 2018In his new monograph, Steven Gambrel takes readers on a tour of some of his most masterful projects at home and abroad. Top: Gambrel designed this saddle-stitched red-leather library with a Belgian Rouge Griotte mantel for a full-floor apartment in Chicago’s Palmolive Building. All photos by Eric Piasecki

The New York designer Steven Gambrel, who founded S.R. Gambrel, Inc., in 1996, is known for the seemingly effortless manner in which he fuses a classical design vocabulary with the ways his clients live now. In the introduction to his new book, Steven Gambrel: Perspective (Rizzoli), he states: “Our perennial quest is to reinterpret tradition with intriguing twists and irreverent juxtapositions.” Gambrel’s interiors, whether they are situated in a venerable Fifth Avenue apartment building or a 19th-century wood-frame house on Long Island, are conceived with the same lavish attention to detail, sophisticated layering of materials, textures and colors and underlying concern for his clients’ tastes. All these qualities are on ample display in the volume’s luscious photographs, by Eric Piasecki, of 12 residences in both urban and bucolic settings. (This is Gambrel’s second monograph; his first, Steven Gambrel: Time and Place, was published by Abrams in 2012.)

The book starts off with a bang: a full-floor apartment in Chicago’s Palmolive Building, a 1929 Art Deco structure by Holabird & Root. Working with the Chicago firm Liederbach & Graham Architects, Gambrel and his office developed a palette of materials and textiles inspired, he writes, by “the seemingly infinite gray-blueness of Lake Michigan,” of which the apartment has sweeping views. Fumed-oak floors, waxed and polished Venetian plaster walls and an elegant set of dining chairs by Jean-Michel Frank invite second glances. So do the pair of rosewood doors with mercury-mirrored trim that lead to the apartment’s surprising showpiece: a library with walls of saddle-stitched, deep red leather inspired by the Hermès-goatskin-lined library of the Kersey Coates Reed house, designed by David Adler and Frances Elkins in nearby Lake Forest, Illinois, and completed the same year as the Palmolive Building. Gambrel designed the apartment’s home office to evoke vintage luggage, with bleached walnut straps and bark-paper-covered walls and drawer fronts. 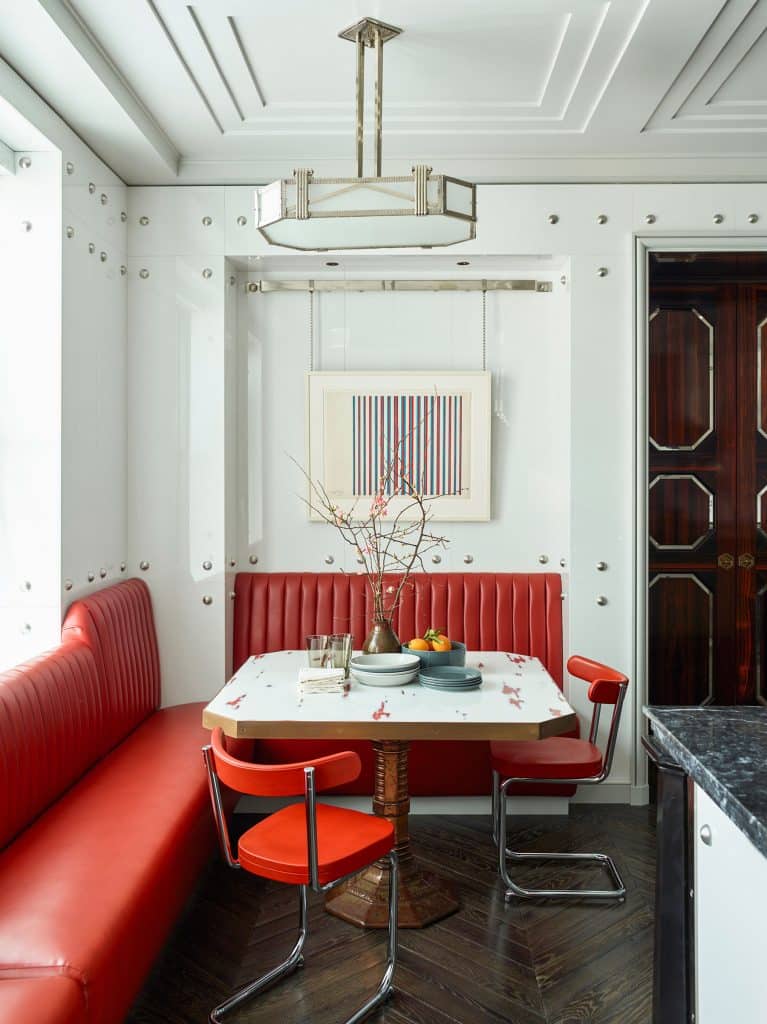 “The banquette is reminiscent of upholstered seats in vintage cars made in Detroit,” Gambrel writes of this kitchen in an apartment in Chicago’s Palmolive Building. “An Art Deco light fixture hangs from a ceiling inspired by one I admired in the American Bar in Vienna, designed by Adolf Loos in 1903. The striped artwork is by Bridget Riley.” 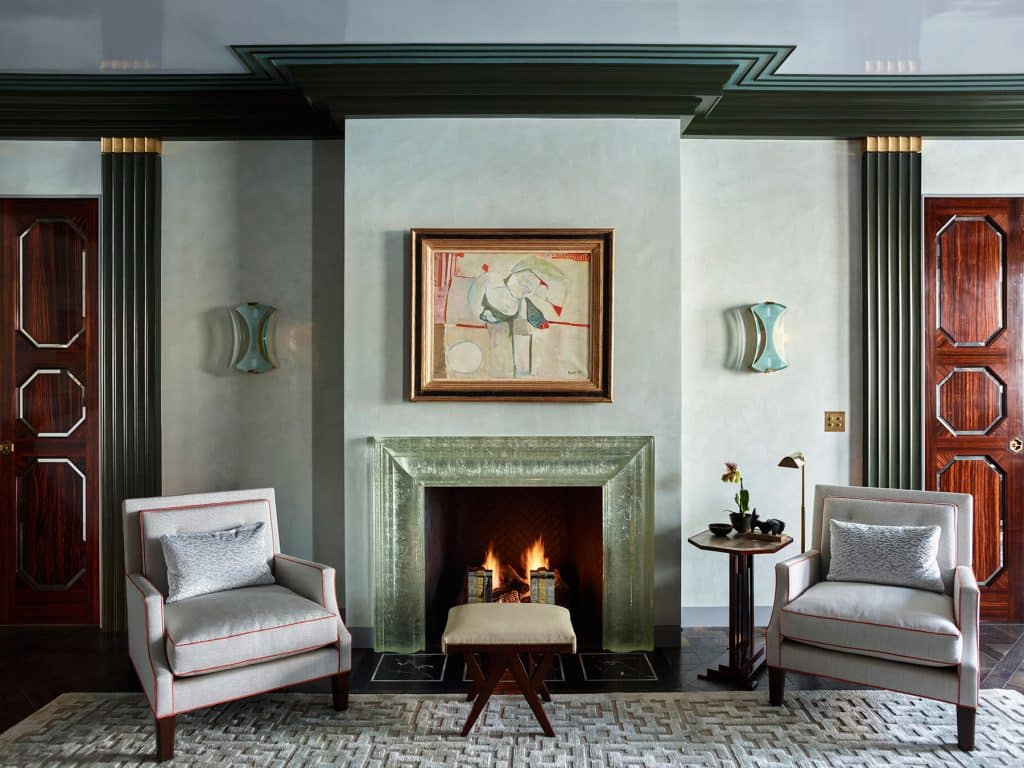 In the living room, a 1961 painting by Francisco Bores hangs over the custom molded-glass mantel. “Walls are waxed and polished Venetian plaster, which adds to the ethereal palette and amplify the light that filters through the space,” Gambrel writes. 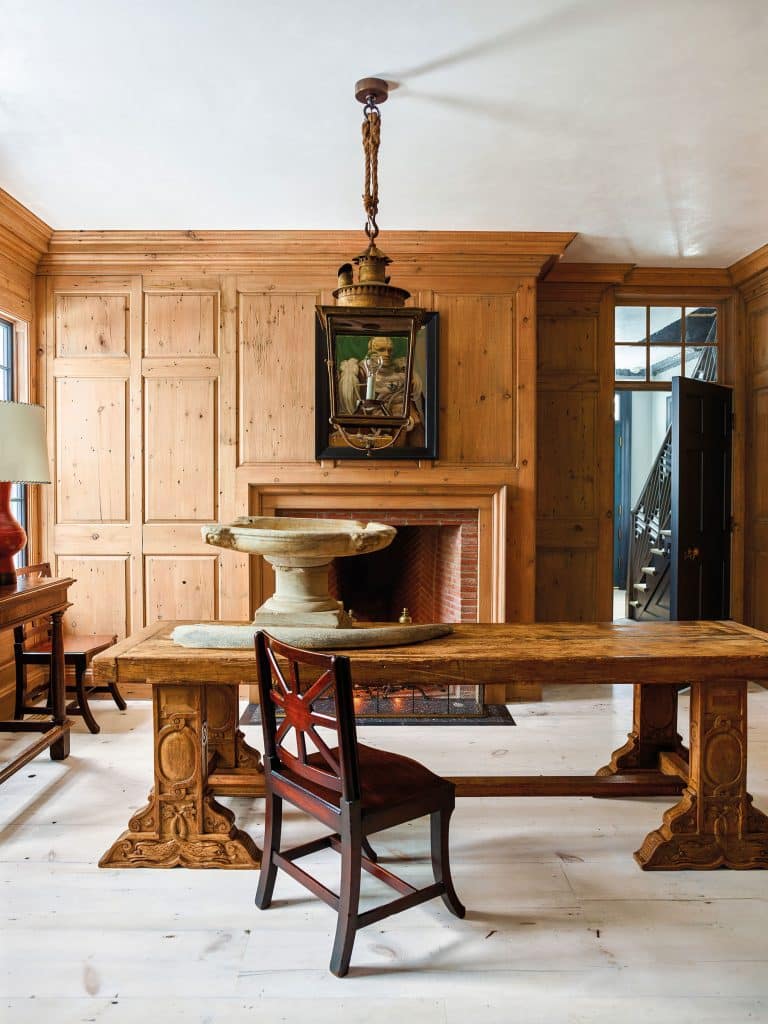 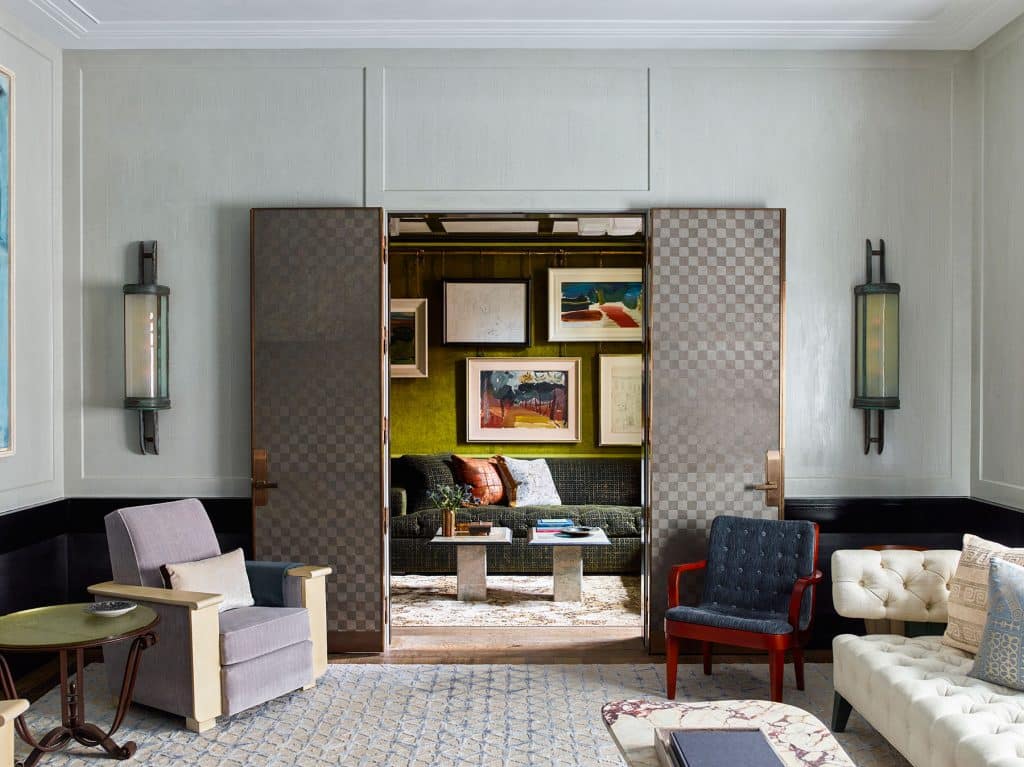 In this Mayfair, London, pied-à-terre, “the moss green velvet snuggery is framed by the living room doors and almost appears to be a painting on the wall, rather than a room to enter,” Gambrel remarks in the book. 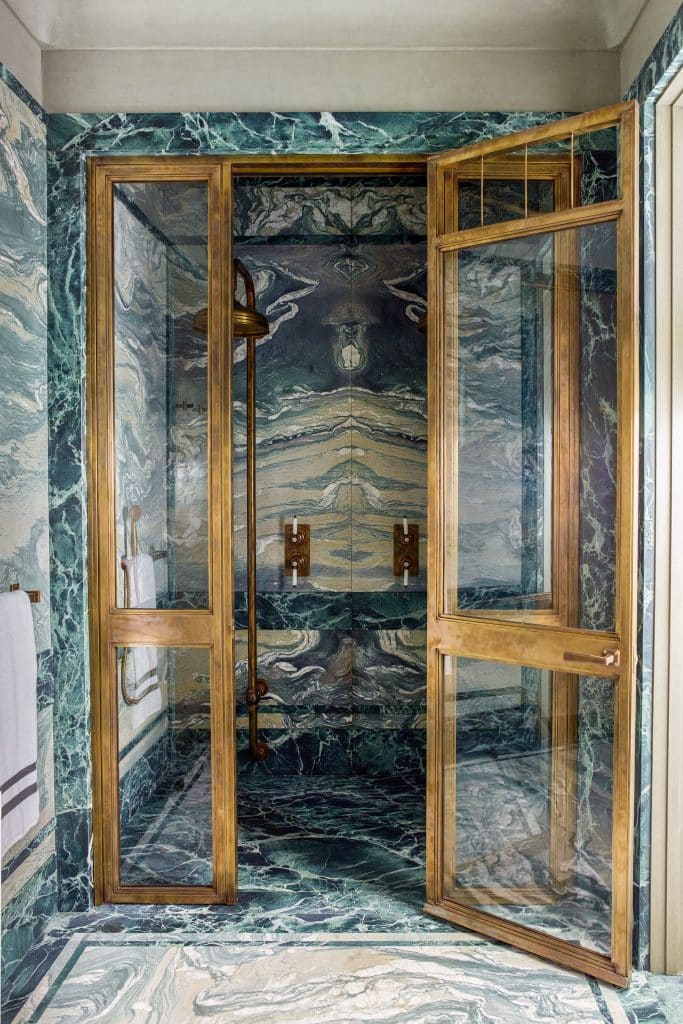 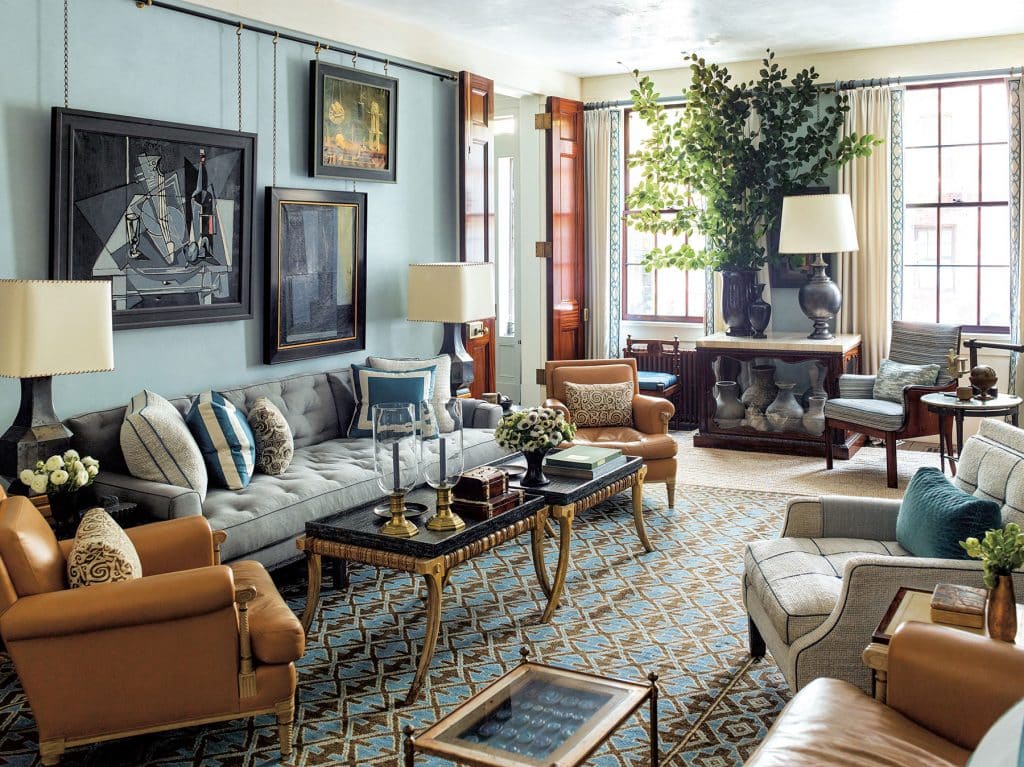 After purchasing his New York townhouse, Gambrel converted the four-unit residence back to a single-family home. During renovations, he and his husband “traveled in search of the unusual and amassed a collection that now feels an integral part of this historic house.” 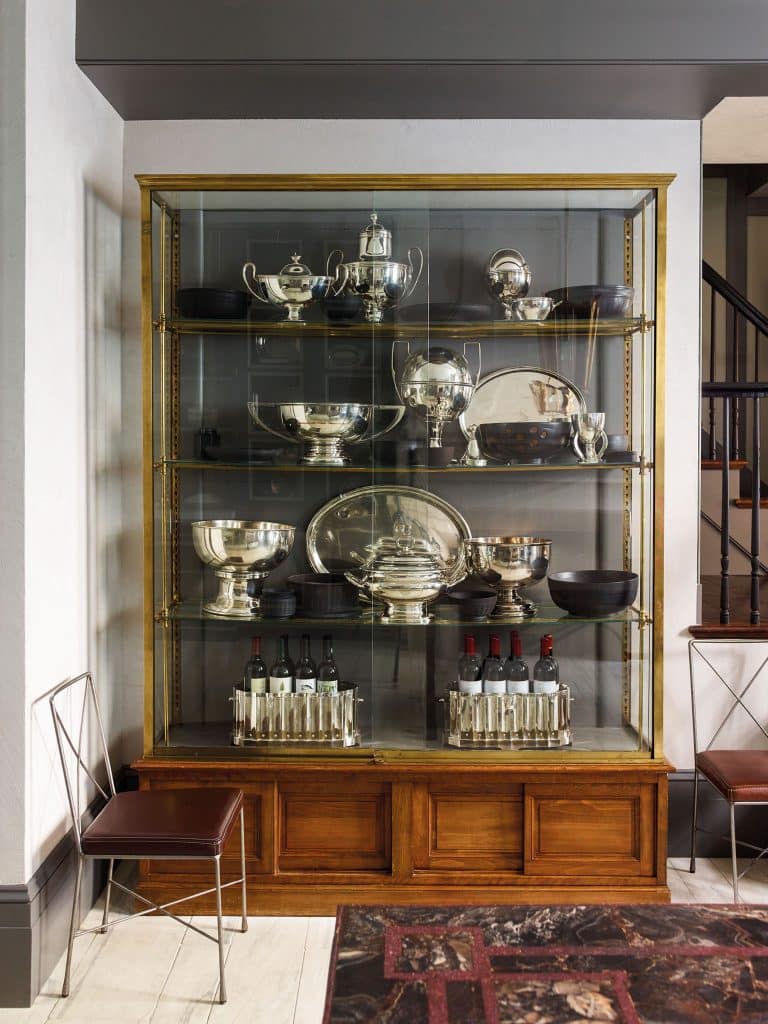 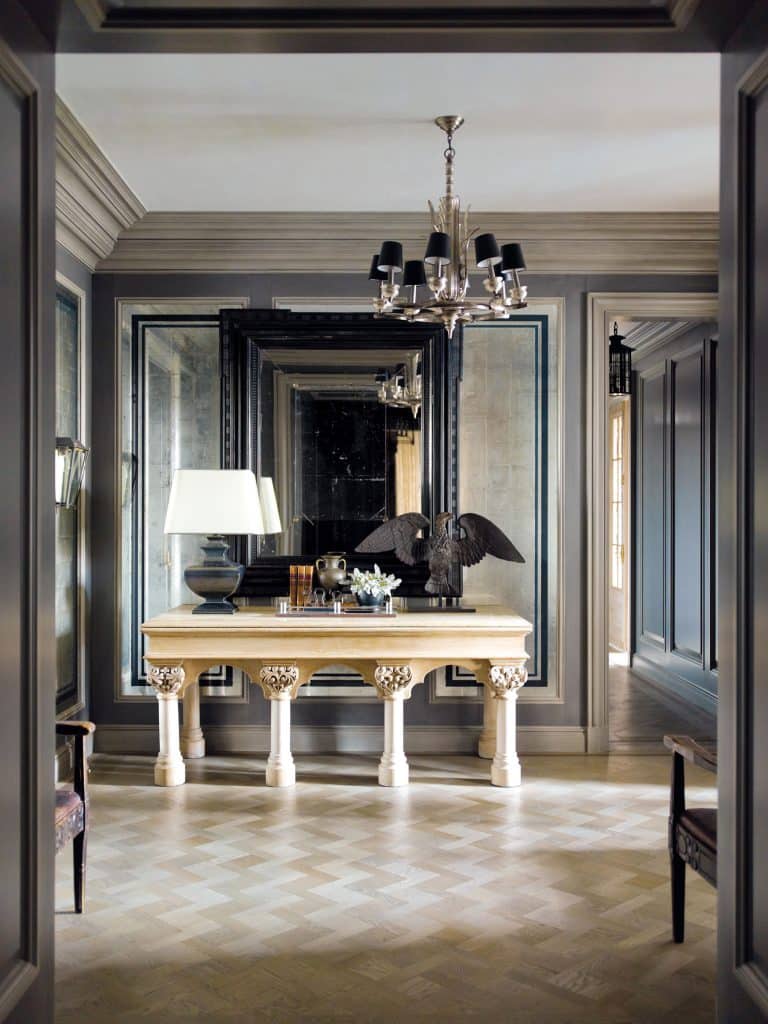 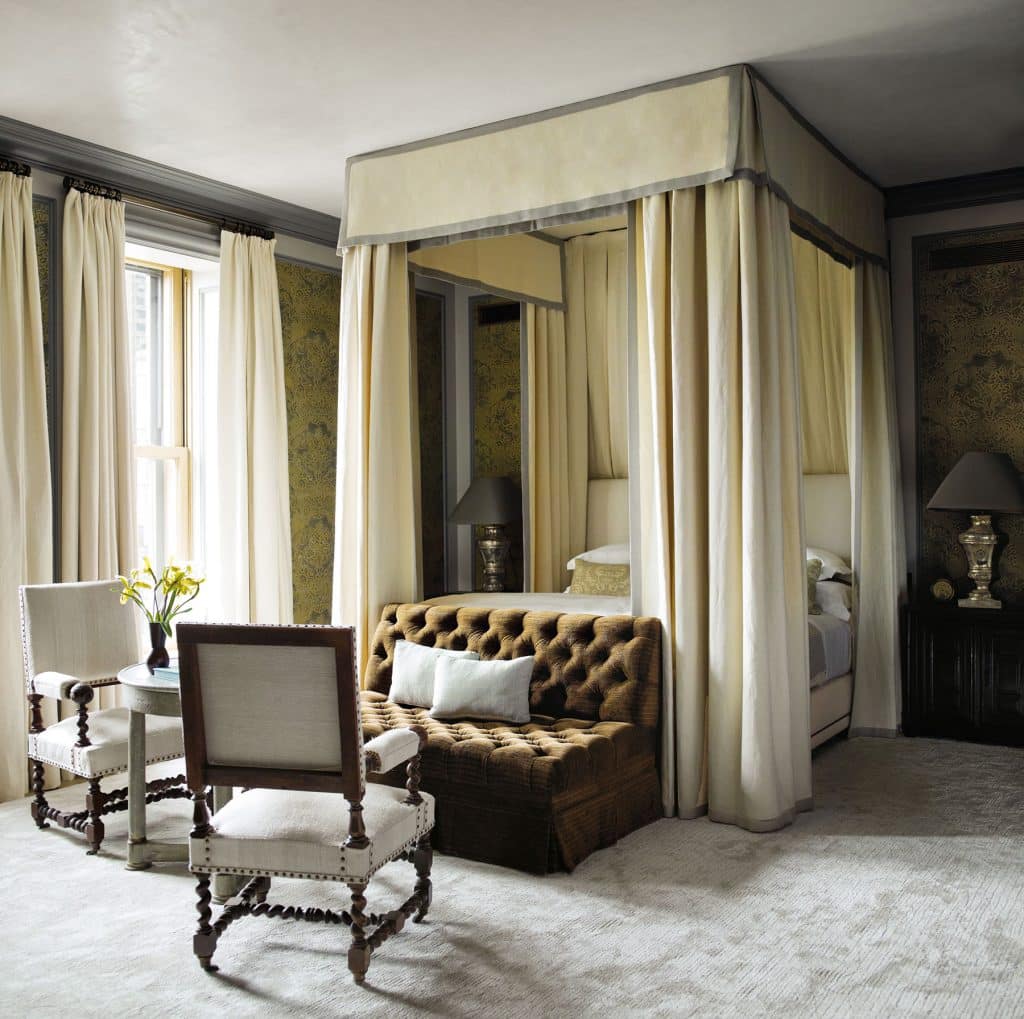 A curtained bed, Gambrel says of the suite, “gives the master bedroom a luxe vibe, but the heavy Belgian linen keeps it young and modern.” 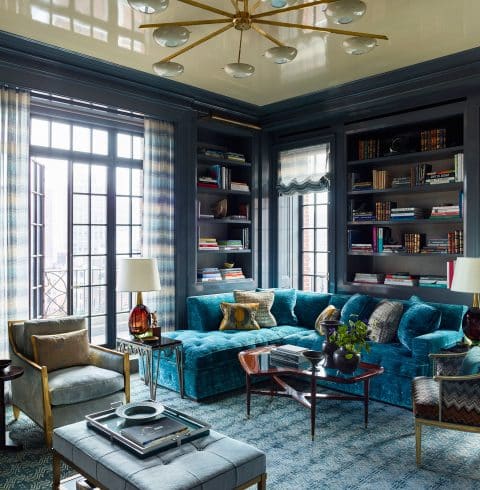 “I was less concerned with historical accuracy and more inspired by my clients’ readiness for lacquer and unexpected color combinations,” Gambrel writes of this lacquered library, in a prewar Manhattan residence, with a private terrace overlooking Park Avenue.

In a more rural setting but just as sumptuous is Little Glover, Gambrel’s guest cottage, located near his home in Sag Harbor, New York. In the book, he describes the structure, which was designed in collaboration with the Atlanta and New York–based architecture firm Historical Concepts, as “a bit of a laboratory for my architectural and design interests.” Gambrel drew on the details of the historic houses that he loves to sketch. In the dining room, for example, he incorporated pine paneling from an 18th-century house in Salem, Massachusetts, working closely with craftsman William Suchite, who also made the 18th century–inspired paneling in the large sitting room. The front parlor has rough-coat plaster walls and a fireplace mantel of ancient marble. The breakfast room houses a large vitrine displaying objects collected by Gambrel. The light that streams in gives the spare, generally pale-toned rooms an almost Scandinavian quality.

Indeed, although Gambrel does color supremely well (see the aforementioned red library in Chicago), many of the interiors in this book have subdued, moody color schemes. Blue, in various shades, seems to be a theme. “Blues, grays and silvers offer the best contrast with the clarity of light,” he recently told Introspective. “They feel modern and crisp.” But Gambrel also employs what he terms a more “atmospheric” palette. “Working with rich, textured materials started to evoke a deep, smoky environment” that was influenced in part by the dark-light contrast in Dutch still-life paintings, he says, noting that this effect is most pronounced in the projects that are the most spare, like Little Glover. This tonal juxtaposition “is so graphic,” he says. 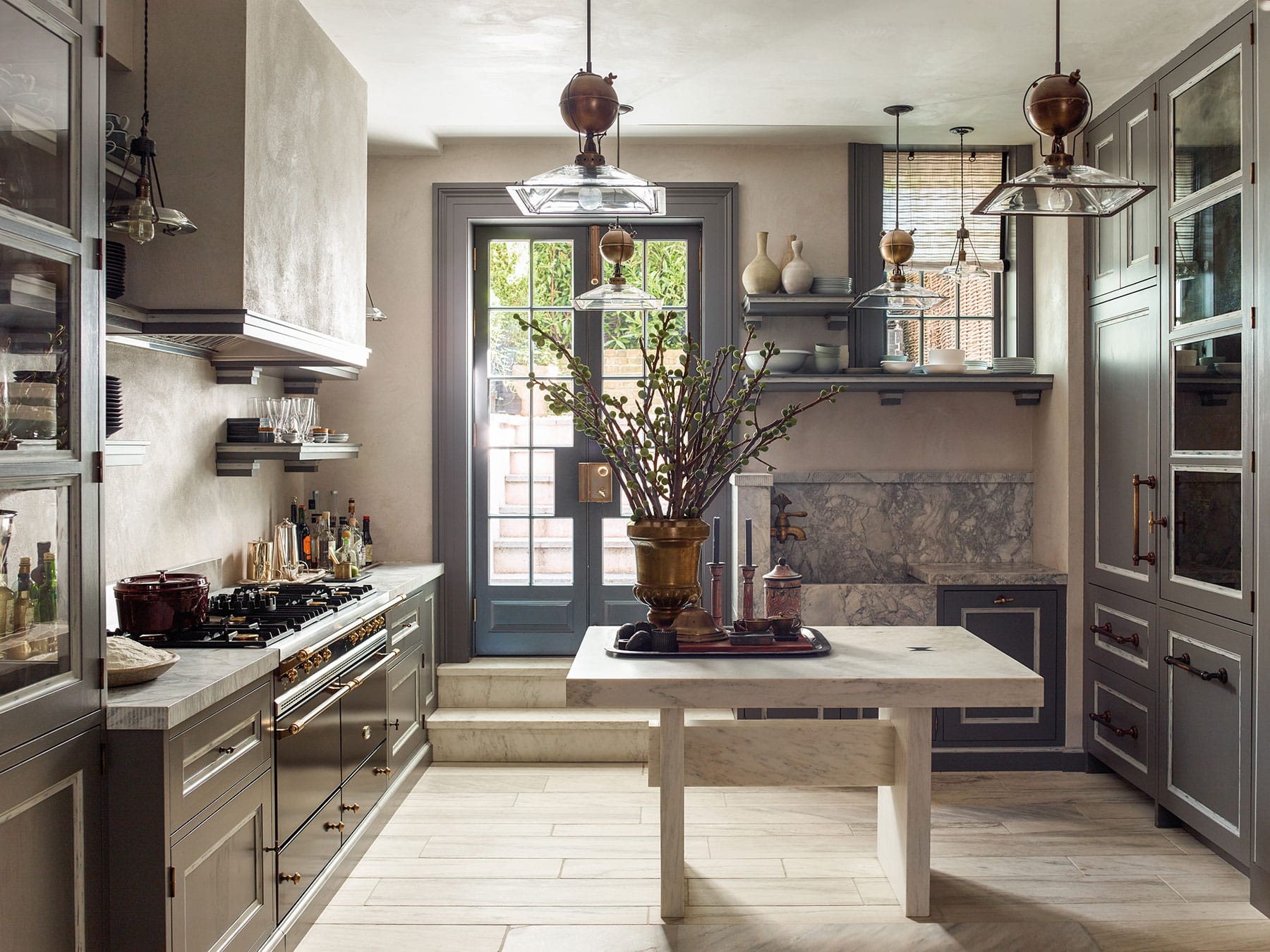 The kitchen floor of Gambrel’s 19th-century Manhattan townhouse was lowered by three feet to gain ceiling height and access to the garden. “The kitchen sink was inspired by a house in Amsterdam; it incorporates an antique faucet found on a European expedition,” he writes. 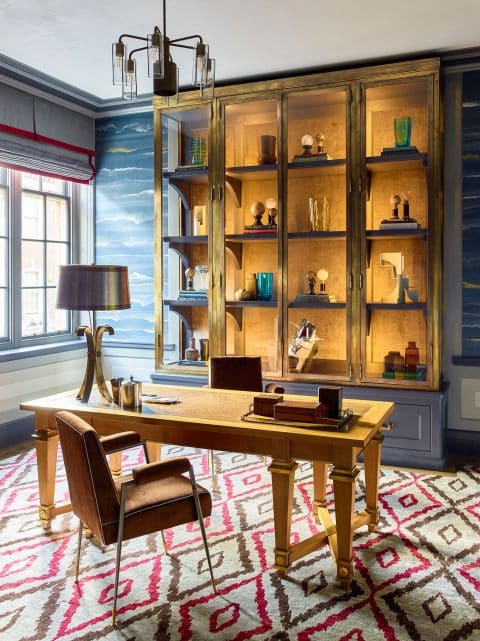 This office in a London pied-à-terre features hand-painted silk walls and a custom vitrine displaying a collection of “oddities,” according to Gambrel.

Another theme running through the book is how his use of detail has evolved in working with clients who are as committed to perfection as he is. In fact, his next book — which is set to appear in a couple of years and for which he is already photographing interiors — “will be much more about celebrating this level of detail,” he says, “and about very stately environments.”

In the meantime, Gambrel, in another collaboration with Liederbach & Graham Architects, has completed a house outside Chicago that is new but, he says, “has all the credentials of great architecture” of the past. He is also at work on the renovation of a house in London and on the reconstruction of Tidalholm, the 1853 mansion in Beaufort, South Carolina, that was the setting for such films as The Big Chill and The Great Santini. Gambrel terms it “a passion project, both for the clients and for me.” And he’s designing a series of pavilions for a family on a private island that he describes as “a world unto itself.” But although his projects are becoming larger and more complex, Gambrel remains focused on the idea that sometimes less really is more. “I don’t just want more stuff,” he says. “It’s also about learning to refine.” 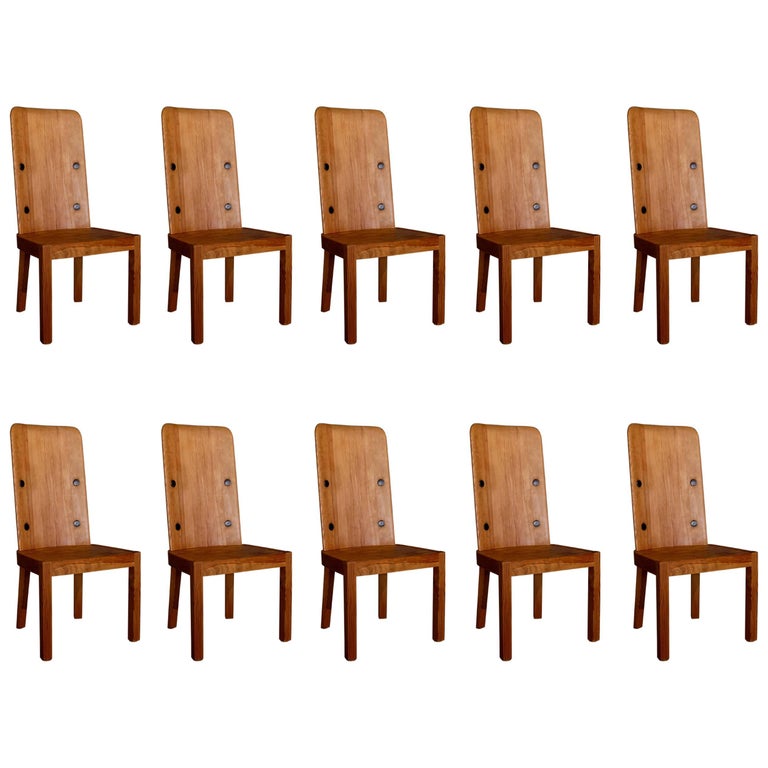 “Axel Einar Hjorth is an extremely important maker, and these chairs cross that fine line between rough and refined.” 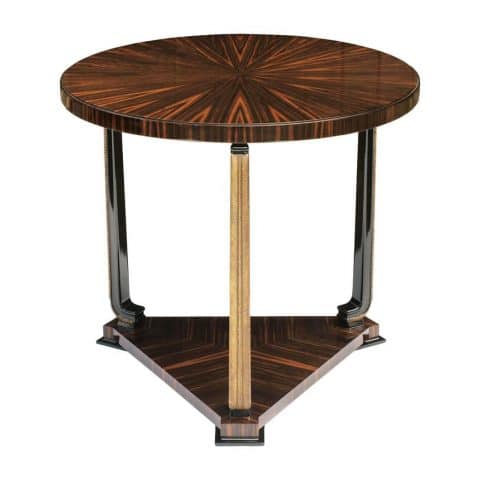 “This table would be perfect in almost any urban environment. The wood finish is superior.” 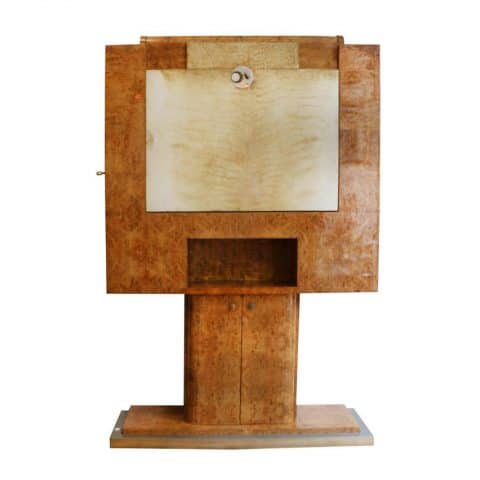 “I like the modern proportions and unique scale of this piece.” 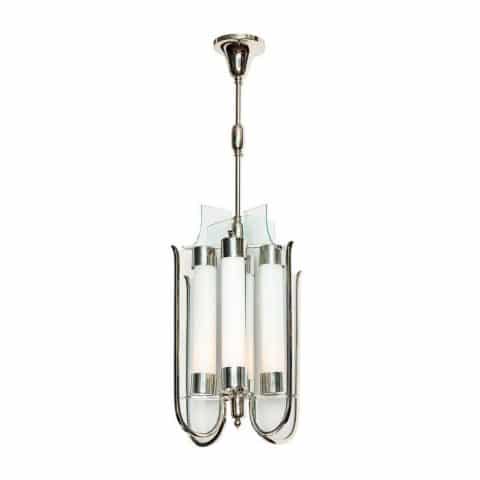 “Lights like this feel special and unique but work well in modern bathrooms.” 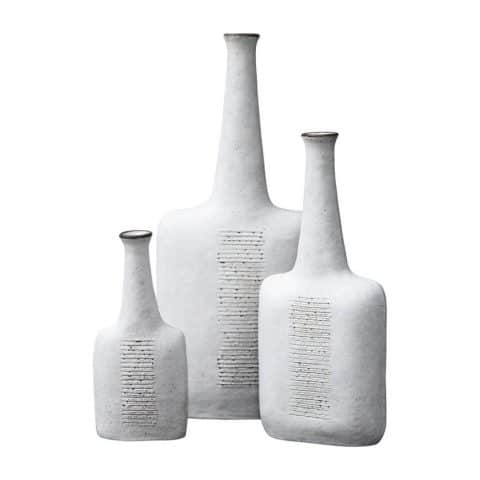 “I like the chalky quality of these Bruno Gambone vessels. He was a master at glaze techniques.” 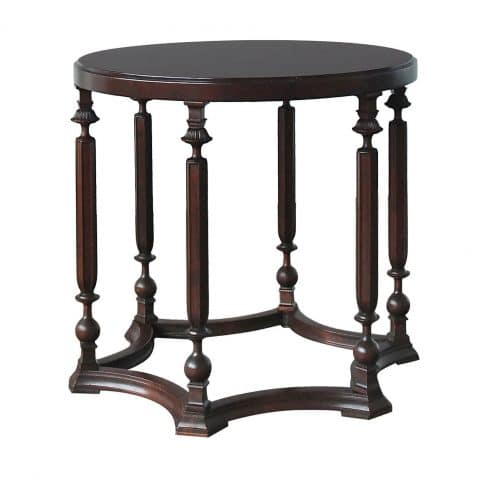