This Design Duo Breaks Down Boundaries in Milan 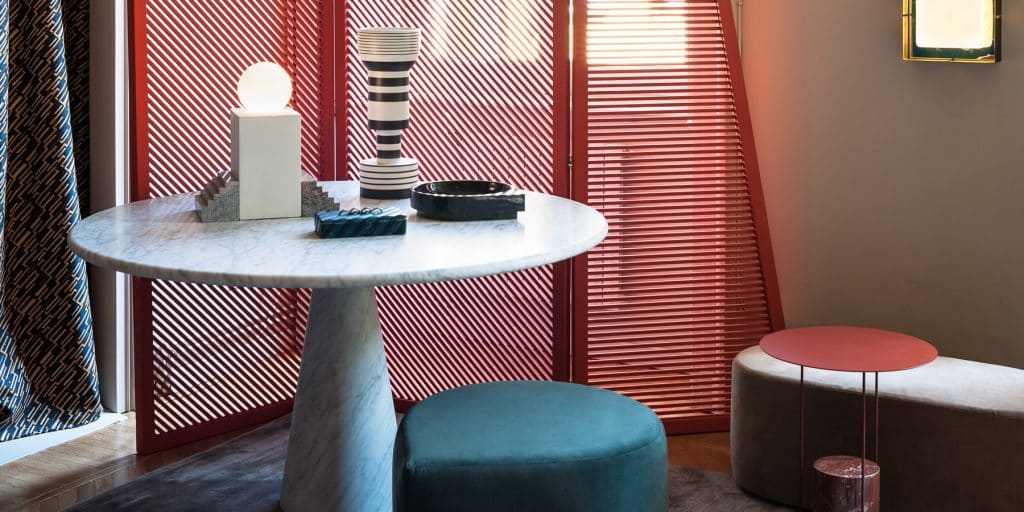 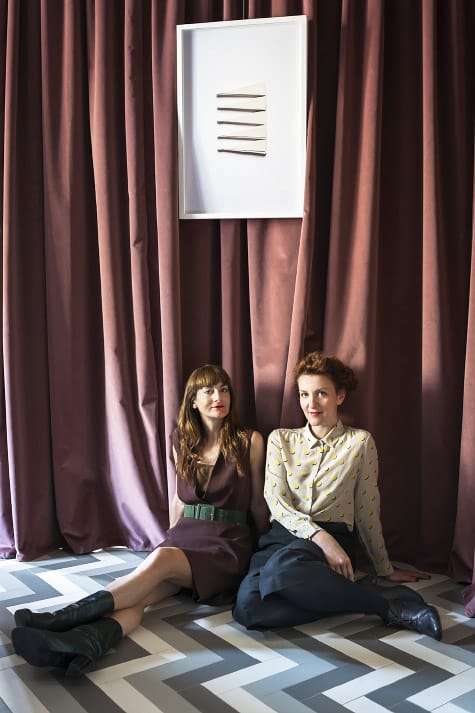 April 16, 2018Arianna Lelli Mami and Chiara Di Pinto founded Studiopepe in Milan shortly after graduating from the Politecnico di Milano with degrees in, respectively, interior and industrial design. Top: For the city’s Salone di Mobile last spring, the firm decorated an apartment in an early-19th-century building in the Brera neighborhood. Photos by Andrea-Ferrari

When Arianna Lelli Mami and Chiara Di Pinto studied at the Politecnico di Milano in the early aughts, their paths seldom crossed. Lelli Mami was in the interior design section; Di Pinto specialized in industrial design. “We’d occasionally have a chat at the coffee machine,” says Lelli Mami. Their careers could have been very different if they hadn’t independently traveled to Mexico after graduation in 2005 and found themselves on the same beach in a tiny Pacific Coast resort called Mazunte. “I recognized Chiara from behind because of the red hair,” Lelli Mami recalls. Says Di Pinto: “I couldn’t believe my eyes when I turned around and saw Arianna.” They quickly clicked and decided to work together on their return to Milan.

Their first project — a product shoot for Case da Abitare magazine based on rebus puzzles, in which objects were juxtaposed with letters to create phrases and sayings — made the publication’s November 2005 cover. That same year, they founded their own design practice, Studiopepe, named for the street on which their first offices were located, Guglielmo Pepe, which was itself named for a 19th-century Italian general and patriot. Since then, they have become highly sought-after in many design fields, thanks to their distinctive aesthetic, characterized by striking color combinations and penchant for geometric forms. “We like to have a visual impact,” says Lelli Mami. “Minimal style is nice, but it’s not enough.”

Shoots they’ve styled have appeared in such anglophone titles as the New York Times’ T magazine and Wallpaper*, but it is with the Italian edition of Elle Décor that they are most closely associated. When I recently met with them in Milan, they were on a shoot for the April issue of the magazine, whose theme is Organic. In a studio in the northern stretches of the city, they had erected a set consisting of an enormous cocoon-like structure made from flesh-colored Lycra. Lelli Mami is the more direct of the pair, answering the great majority of questions first, and Di Pinto has more of an ethereal quality. But they share “a common desire for creative experimentation,” notes Elle Décor Italia editor in chief Livia Peraldo, adding, “Their curiosity and desire to take on challenges have remained unaltered. In many years of collaboration, we have never repeated the same format, and we nearly always managed to have fun.” 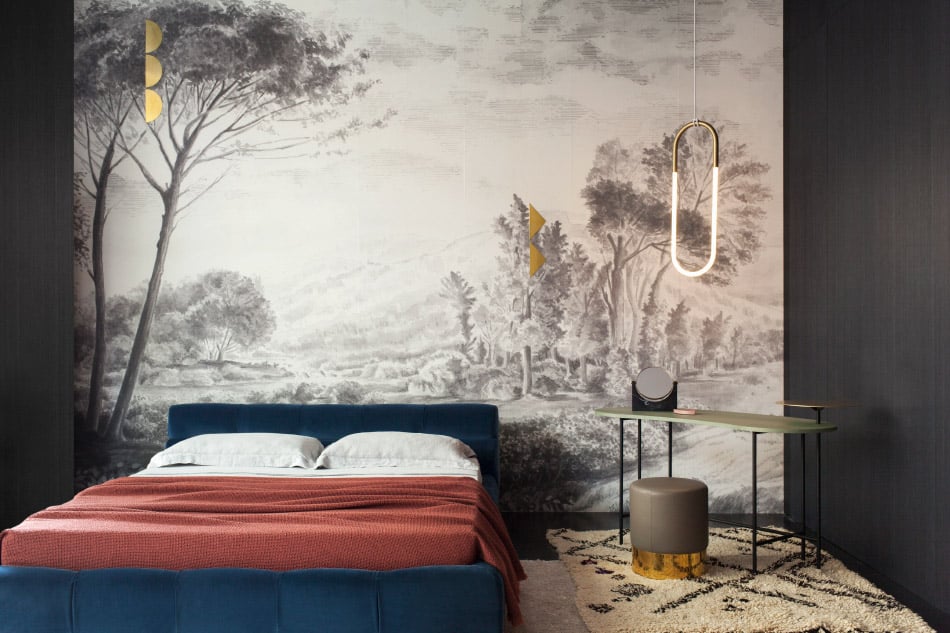 Since 2009, Studiopepe has collaborated with Spotti Milano on the design of the Italian interiors brand’s Milan showroom. This 2016 iteration was called “Instant Panorama.” 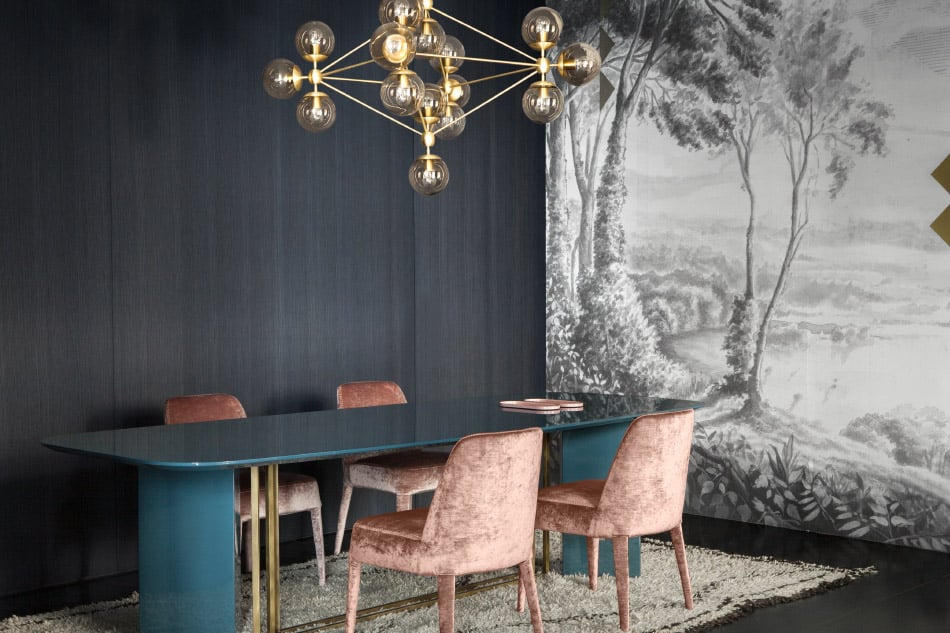 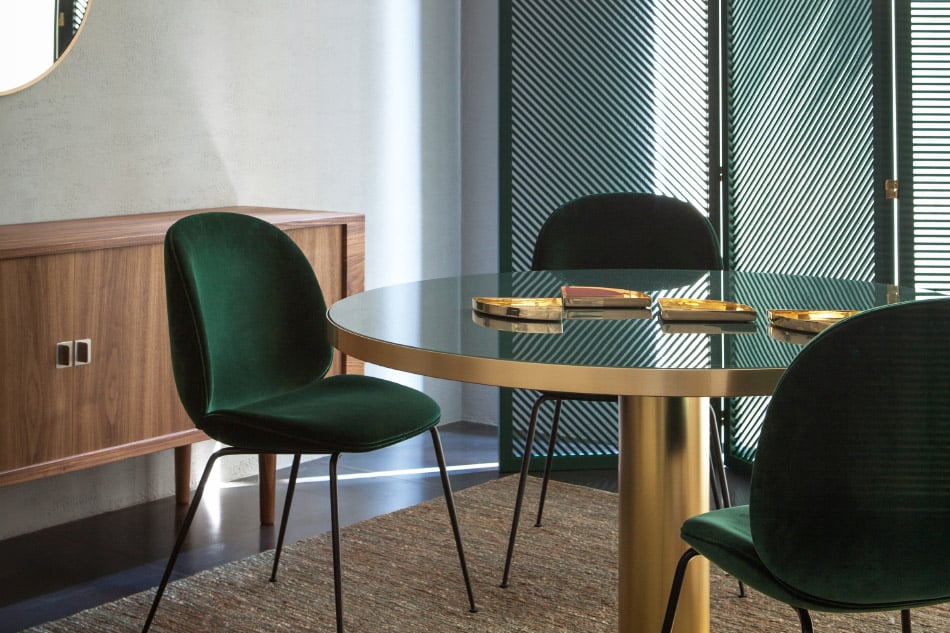 Says Spotti co-owner Claudio Spotti: “Arianna and Chiara understand how to interpret our style with a sophisticated and timeless approach. Over the years, they have shown they are able to combine originality and elegance.” Photo by Silvia Rivoltella 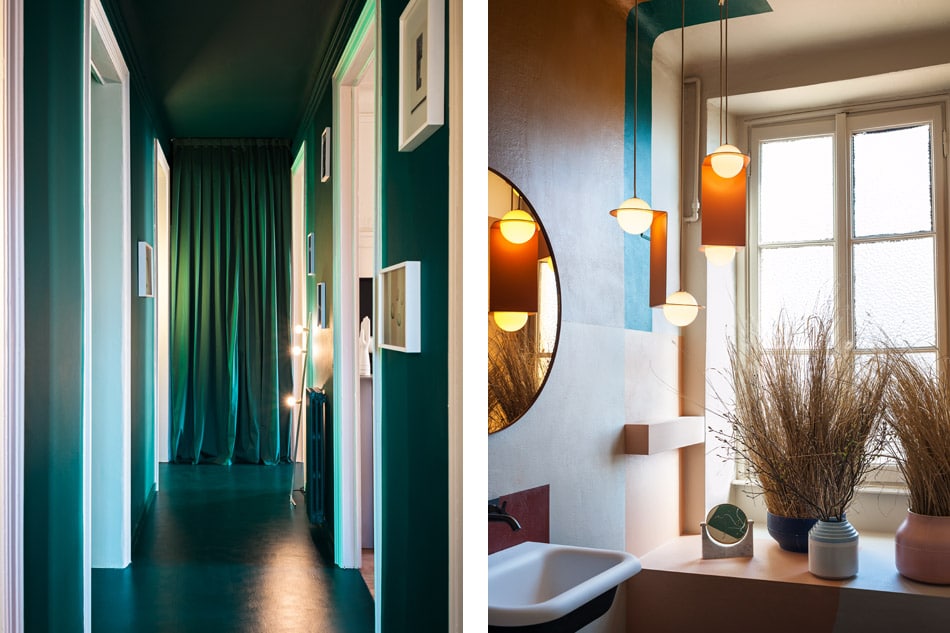 The Brera apartment the studio decorated for Salone last year included a vivid green corridor (left) and wall frescoes inspired by the Bauhaus and the work of Piet Mondrian (right). Photos by Andrea Ferrari 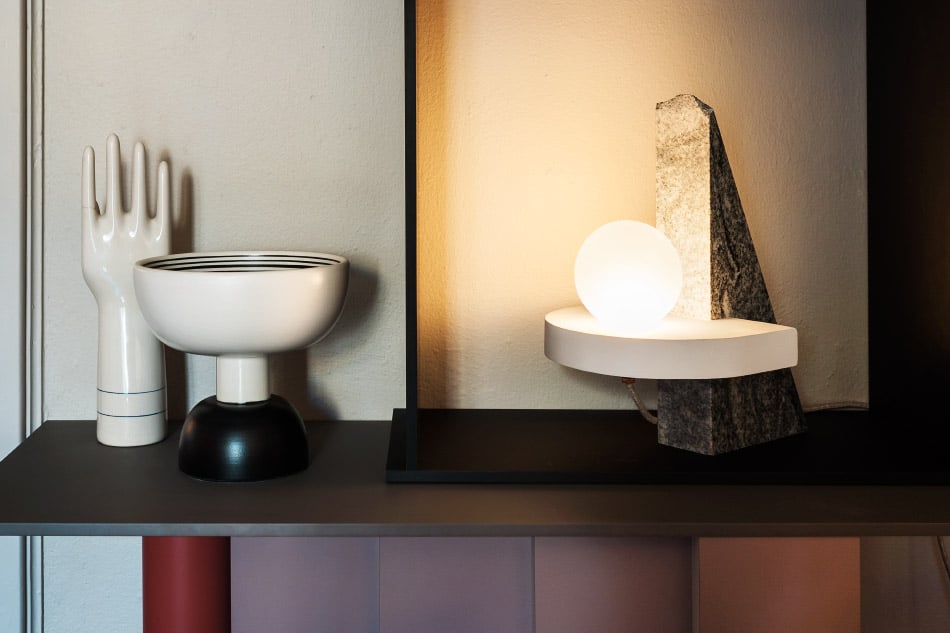 The apartment’s mix of furnishings and objets combined pieces of Studiopepe’s own creation with ones by other designers and makers. Photo by Andrea Ferrari 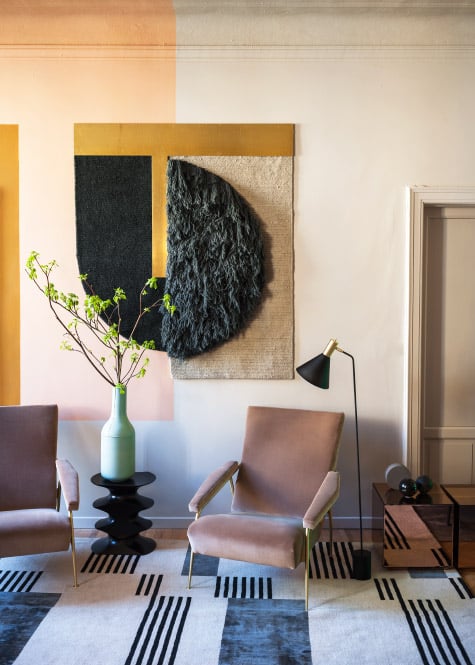 Today, the Studiopepe staff comprises 16 employees who participate in a range of activities, from trend forecasting and creating window displays to product design and making sets for advertisements and catalogues. One of its most enduring collaborations is with the Italian interiors brand Spotti Milano, whose showroom it regularly revamps. The studio has also imagined several furniture designs for the firm. “Arianna and Chiara understand how to interpret our style with a sophisticated and timeless approach,” says Spotti Milano co-owner Claudio Spotti. “Over the years, they have shown they are able to combine originality and elegance.” Other recent or ongoing projects include fashion stores for Alysi in Milan and a Zara-like Thai brand called Jaspal in Bangkok, as well as one floor of the Amsterdam homeware store Co van der Horst, which was unveiled in late March. Its main feature is a 30-foot-long wall clad with different-colored marbles arranged in interlocking geometric patterns that evoke, among other things, doorways and vegetation. Also on the drawing board is their very first hotel, located near Paris’s Gare de l’Est.

One of Studiopepe’s most important annual events is the Milan furniture fair. Last year, Lalli Mami and Di Pinto decorated an apartment in an early-19th-century building in the Brera district, using vivid green for the corridor and adorning the walls with frescoes inspired by the Bauhaus and the work of Piet Mondrian. For the furnishings, they brought together iconic pieces by such celebrated names as Giò Ponti and Angelo Mangiarotti, ceramics from Kyoto and a smattering of Studiopepe’s own product designs. The latter included their Hello Sonia wall hanging and rugs for CC-Tapis, plus the Talos bed and Cloe armchair for Spotti Milano.

“We like to have a visual impact,” says Studiopepe’s Arianna Lelli Mami. “Minimal style is nice, but it’s not enough.”

The duo, who see such events as a form of design “manifesto,” are presenting a similar project this coming week. Entitled Club Unseen, it will be housed in an early-20th-century warehouse in the Piazza Tricolore area. “It will look like a club where you drink and chat, chill out and listen to music,” promises Lelli Mami. The inspiration for the aesthetic this time comes from the architettura radicale movement of the 1960s and ’70s and the iconoclastic glass-and-neon-light sculptures of Italian designer Nanda Vigo.

Both partners hail from Milan. Lelli Mami’s grandmother was a decorator with a furniture factory in the nearby Brienza region. Di Pinto has more difficulty tracing her creative origins. “I don’t really know why I became a designer,” she says. “My father and my mother don’t have any artistic inclination.” (He owns a vegetable shop; she worked in the foreign exchange department of a financial firm.) 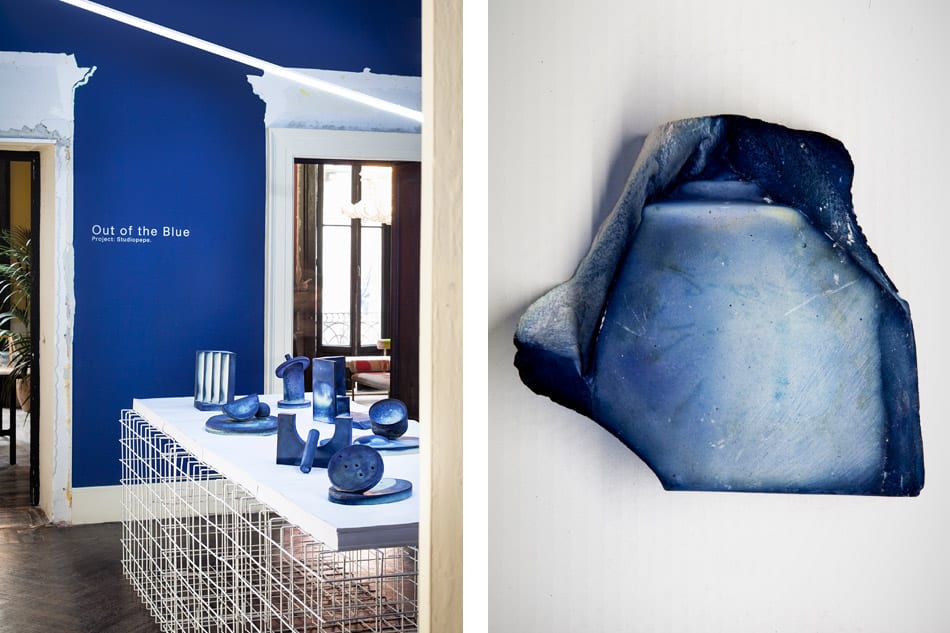 During 2016’s Salone, the duo displayed the sculptural objects they created for a series titled Out of the Blue. The pieces reinterpret forms the women saw at the 18th-century Jantar Mantar observatory in Jaipur. To finish them, Lelli Mami and Di Pinto brushed each with cyanotype solution and then exposed them to light. Photos by Silvia Rivoltella

The goal of each of their projects is to create something unexpected and fresh, but also perfectly timeless. A recurrent approach is to reinterpret archetypal forms. “Everything has already been invented,” explains Lelli Mami. “But when you look at the past with a different eye, you really discover things.” Their Kora vase, for example, resembles an angular version of an antique amphora. Similarly, their Out of the Blue series of sculptures derive their shapes from the structures at the 18th-century Jantar Mantar observatory in Jaipur; as a finishing touch, they are brushed with a coating of cyanotype solution and exposed to the light. “Each one is unique and reflects the atmospheric conditions of a given day,” says Lelli Mami. Further inspiration comes from Italian design masters like Ponti and Carlo Scarpa, flea market finds (they have a treasure trove of objects in their offices) and the color theories of artists Sonia Delaunay and Johannes Itten. “Color is a fundamental of our work,” says Di Pinto. “It’s important for our palette to constantly evolve.” 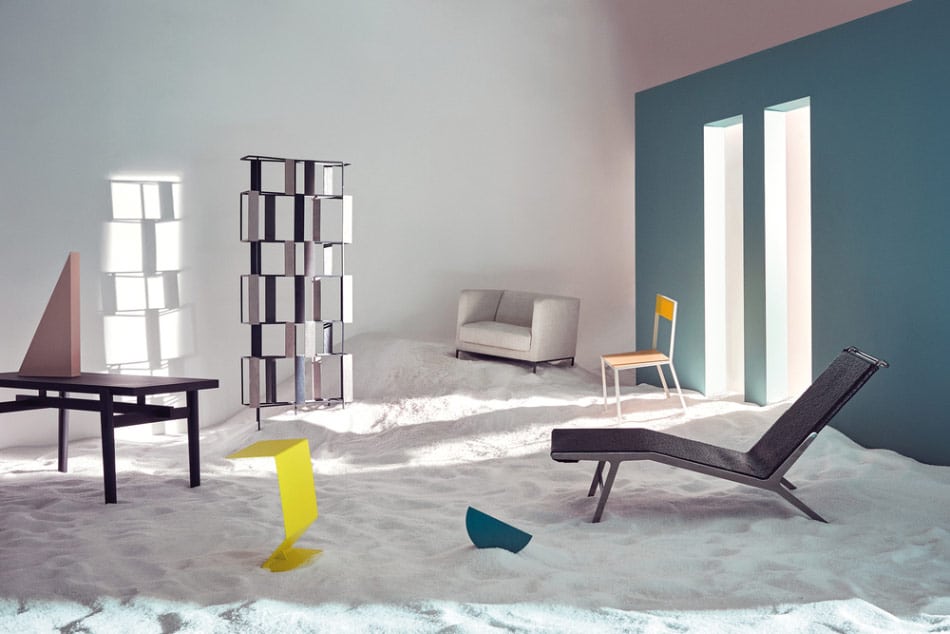 Lelli Mami and Di Pinto created this installation for Elle Décor Italia magazine, with which they have a longstanding and productive relationship. “In many years of collaboration, we have never repeated the same format,” says the publication’s editor in chief, Livia Peraldo, “and we nearly always managed to have fun.” Photo by Andrea Ferrari/courtesy Elle Décor Italia

Recently, the pair has moved into residential design with the decoration of a three-story late-19th-century house near Milan’s Piazza del Duomo. The result is a lot more subdued and classical than the rest of their work, because their client wanted to integrate numerous antiques she already owned. “We worked to create a very bourgeois but intimate atmosphere,” says Lelli Mami. They commissioned a poetic fresco of a forest from the American artist Khara Ledonne for the entry hall and chose an expressive Fornasetti leaf-print paper for the kitchen. Elsewhere, they opted for a mostly gray palette and created intriguing juxtapositions, as in the dining room, where a custom brass sideboard is combined with a Vico Magistretti Atollo 233 lamp and two 17th-century Italian paintings.

Future residential commissions will depend in great measure on the freedom potential clients are willing to grant them. “In general, we prefer public projects because you can be more inventive,” says Lelli Mami. Whatever comes next, they are sure of one thing: Their success is due largely to the longevity and synergy of their partnership. “As we’ve known each other for a long time, we have a sort of cloud of ideas and references we’ve seen together,” explains Di Pinto. Lelli Mami concurs: “We each automatically know what the other is talking about.” 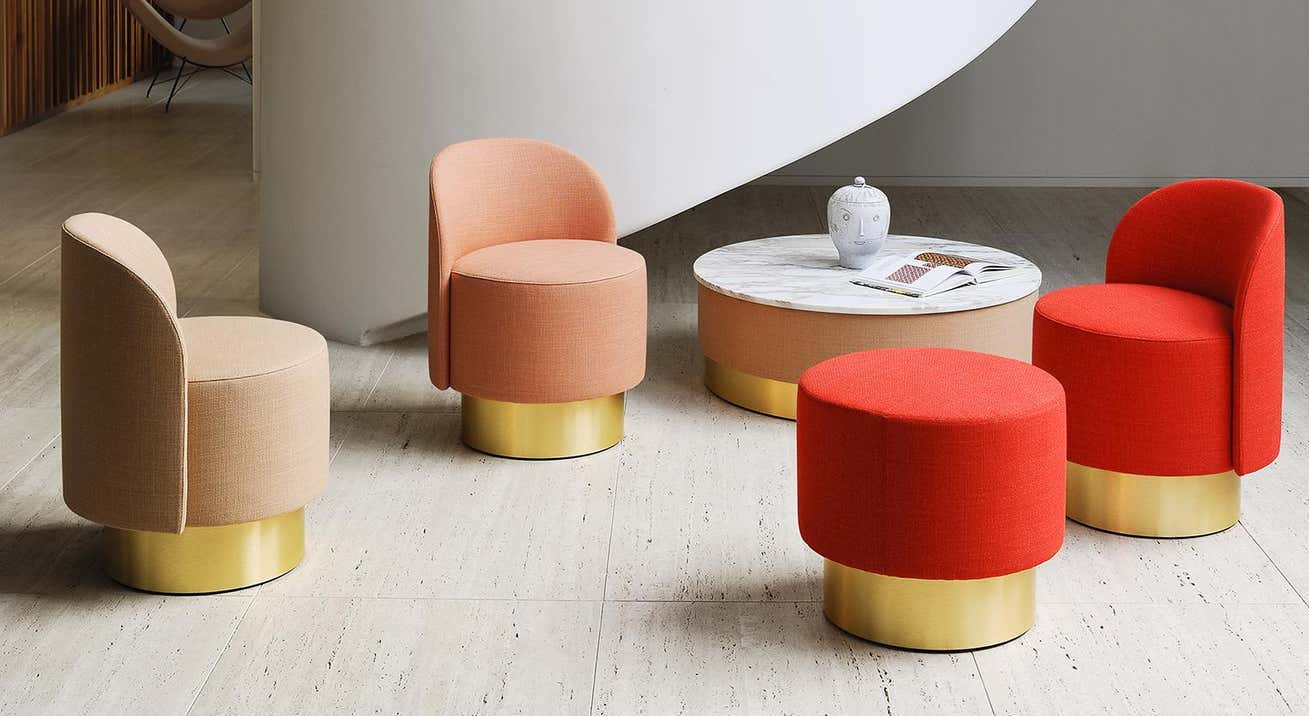 Browse Works by Studiopepe on 1stDibs
Shop All