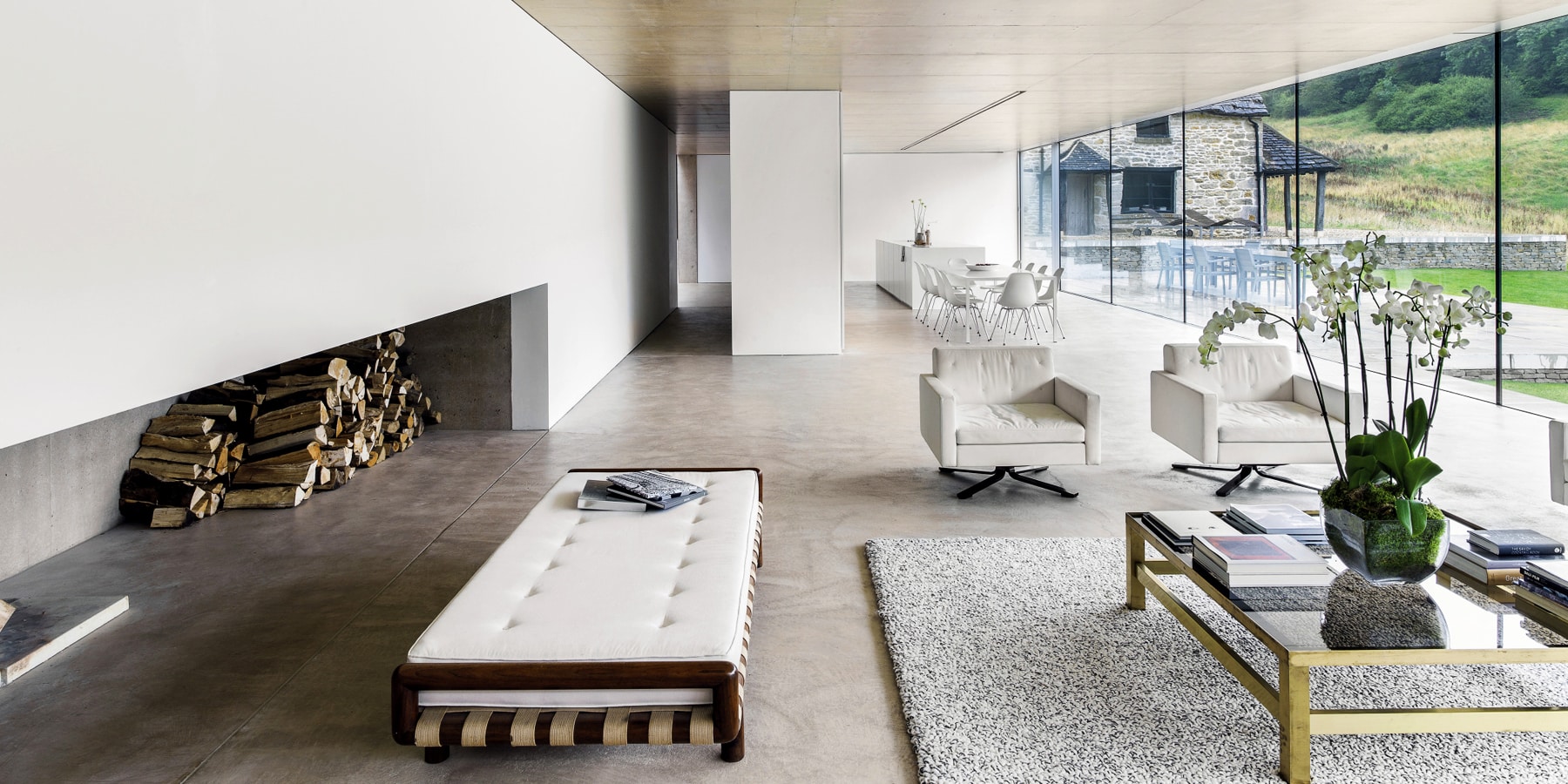 Houses That Preserve the Past and Look to the Future

Marc Kristal delves into the sometimes messy but always magical work of creating homes that blend old and new architecture. 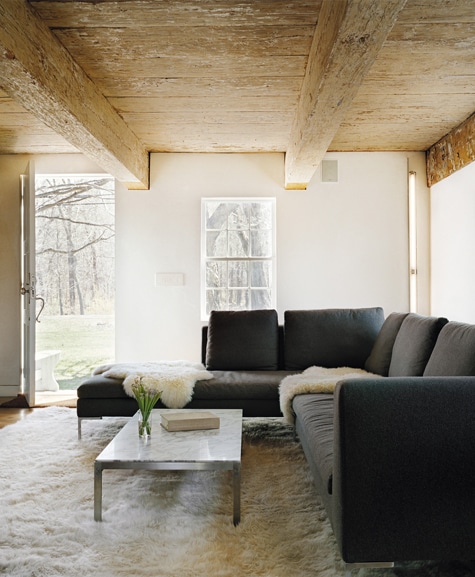 The first floor of Brian Messana and Toby O’Rorke’s upstate New York farmhouse includes a new wall with a double-sided fireplace that divides the living and dining spaces (photo by Elizabeth Felicella/Esto). Top: At architect Richard Found’s country home in the Cotswolds, a panoramic view of the property is visible through the frameless glass walls of the addition (photo by Andrew Merideth).

It can be difficult to pinpoint precisely how an idea takes root in one’s mind. But I believe the seed of my book The New Old House (Abrams) was planted by an observation made by the landscape architect Laurie Olin. A city, Laurie once told me, is an “accumulation of partialities”: a place in which many great plans may go unfinished but that derives its character precisely from the sum of those fragmentary efforts. I felt this acutely when I first visited Hong Kong, where the challenges of dealing with extreme density, colliding cultures, overwhelming human and vehicular traffic and multiple layers of history had produced what might be described as harmonious chaos, a unity derived from contradiction.

This and other experiences gradually rearranged my thinking about the built environment, leading to an interest in architectural and design narrative: cities and, in particular, buildings that weave together multiple states of time the totality of which tells a rich, evocative story. And what better type of building to investigate, I thought, than houses that blend historic and contemporary architecture? Thus began the journey that resulted in The New Old House.

The 18 projects I selected for the book, in the United States, Puerto Rico and the United Kingdom, are different in both style and quality. What unites them is that the creation of each made for a good story. Together, these homes demonstrate the power of mixing old and new — the pleasures and, especially, the rewards. 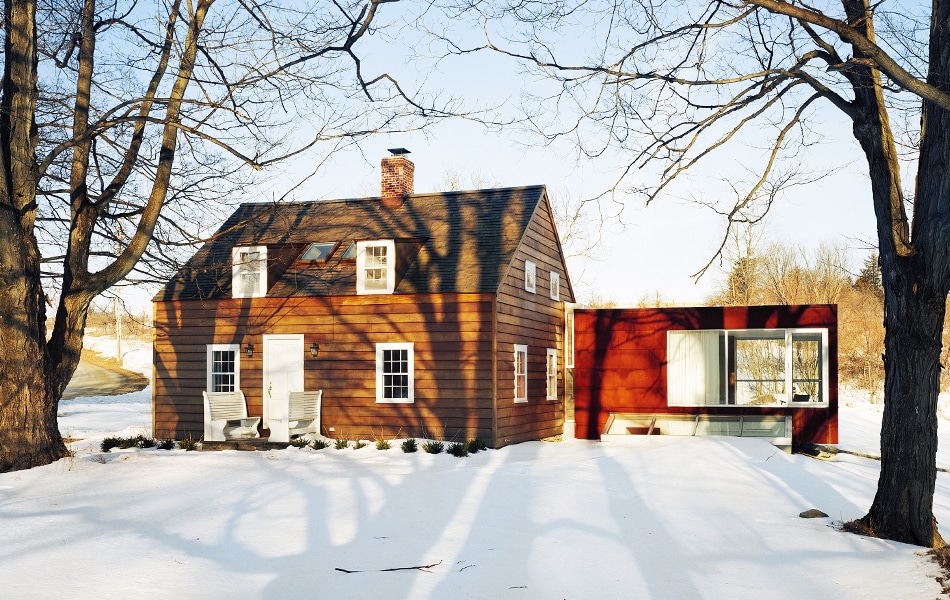 The Dutch H-bent-frame farmhouse was built by one of the area’s original settler families and attained its final pre–Messana and O’Rorke form in the mid-1800s. The main floor of the new wing comprises a kitchen, bedroom, shower and storage. Photo by Elizabeth Felicella/Esto 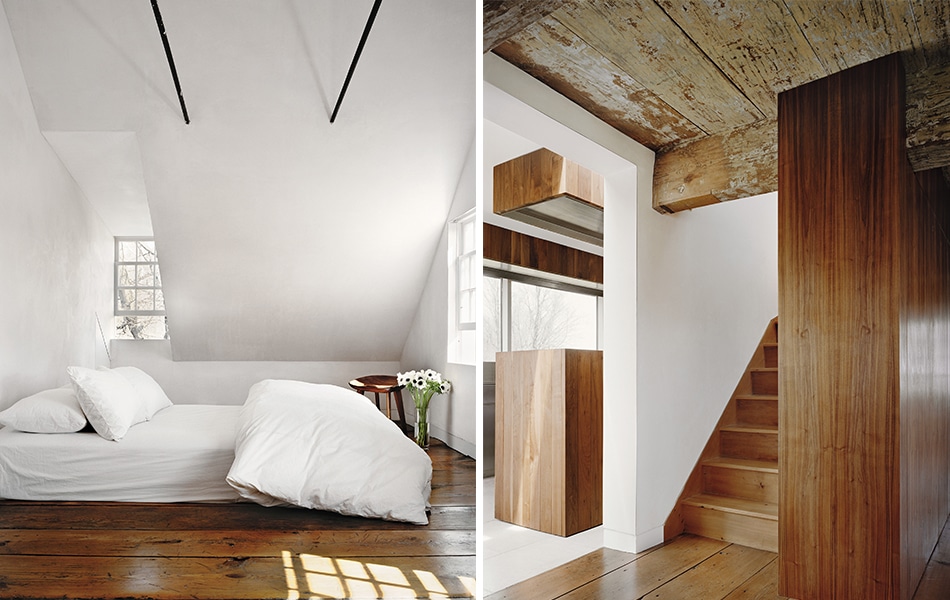 Left: The bedrooms have an all-white color scheme, which is meant to highlight the simplicity of the structure. Right: The stairway to the second floor in the original structure is located next to the entrance to the addition. Photos by Elizabeth Felicella/Esto 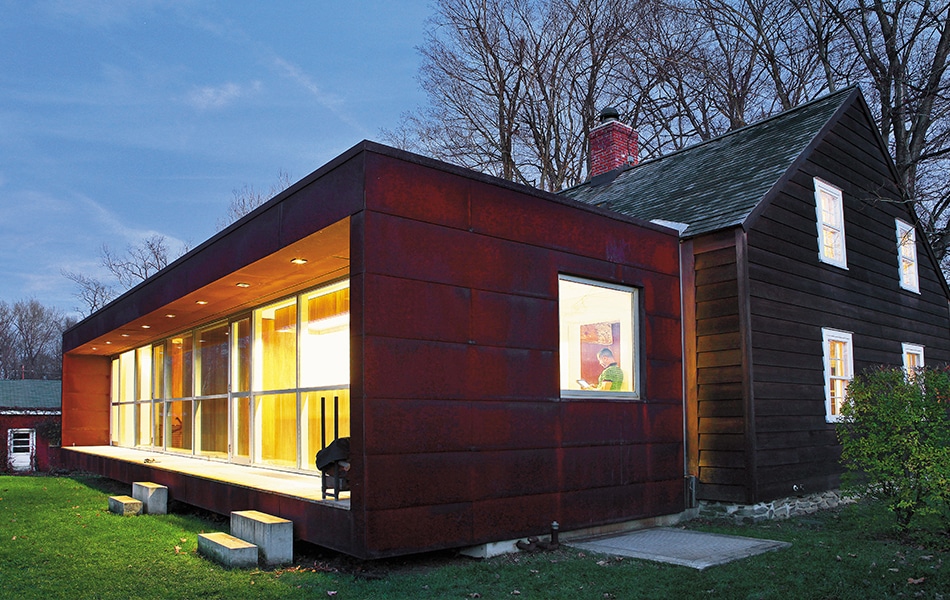 The corten-steel-clad addition opens to the outside via a series of sliding glass doors. Photo by Costas Picadas 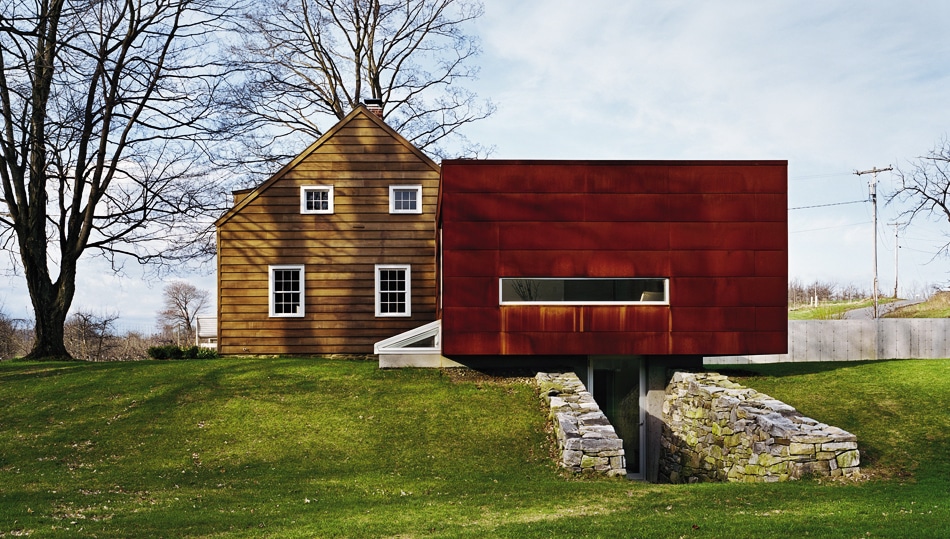 The below-grade door leads to the cellar level of the addition, which includes an exercise space, steam room and sauna. Photo by Costas Picadas 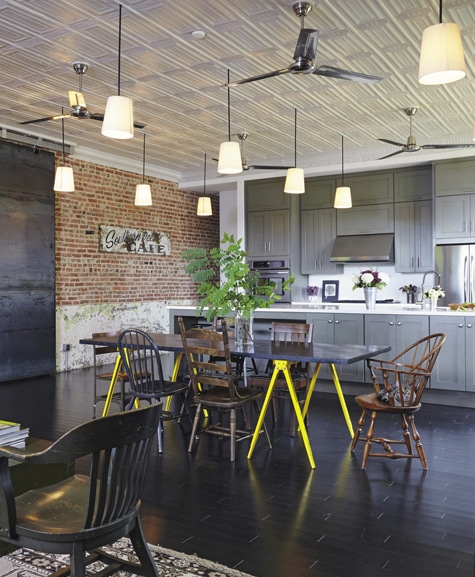 The kitchen-and-living area in this Auburn, Alabama, home is located in what used to be the pool hall; the sliding steel door separates the space from the rest of the living room. Photo by Jean Allsopp

The architects Brian Messana and Toby O’Rorke, who had purchased a tumbledown Colonial cottage in rural New York that they planned to restore and extend, reminded me of the importance of challenging one’s own thinking, and doing so with imagination. Initially, the pair had designed a Colonial-style addition, but then they realized that their pastiche of the original would look glaringly inauthentic. Instead, observing that the structure’s ultrasimple vernacular style was in sympathy with their own minimalist tendencies, Messana and O’Rorke decided that a modernist addition would be more appropriate. Inspired by the local custom of parking metal trailers behind wooden houses, the pair attached an elongated box to the back of the cottage and clad it in corten steel, a material that gradually patinated into a color that blended in with the landscape. The outcome seems at once entirely original and surprisingly inevitable.

From David Hill’s project in Auburn, Alabama, I learned that everything in one’s house doesn’t have to be entirely to one’s liking, and that adjusting to a residence’s eccentricities can in fact produce a more satisfying experience. Hill, a landscape architect, purchased what he thought was an old warehouse in Auburn’s historic African-American neighborhood, planning to convert it into a New York–style loft. But when he discovered that it had actually been four separate commercial spaces (one of them a pool hall) with vivid histories of use, Hill turned into a preservationist. Launching what amounted to a miniature oral history project, he and his wife encouraged their neighbors to come forward with stories about the building. When they realized that the place was haunted by the ghosts of a lively past, the Hills chose to preserve the original plan more or less as it had been. The family has to work around the layout, and not every square foot has been maximized for reuse. Yet the satisfactions of maintaining, and adding to, a significant piece of local history outweigh the occasional grinding of domestic gears. 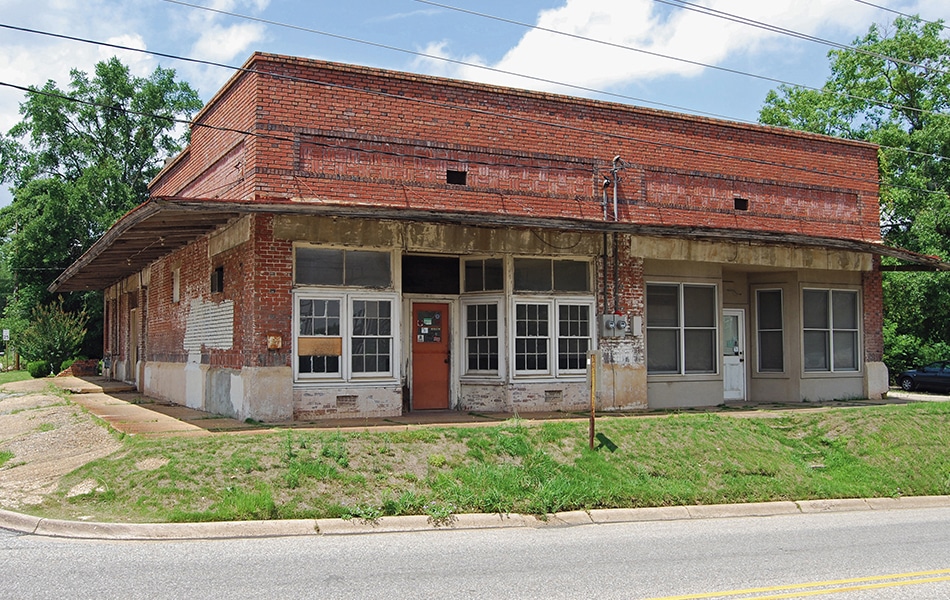 Before landscape architect David Hill, along with his wife, Elizabeth, and their three children, moved to 274 Bragg Avenue in Auburn, Alabama, the building had been officially designated as a “colored” place of business. Over the years, the tenants included a pool hall, a barber shop, a cab company, a fish store and multiple restaurants. Photo by David Hill 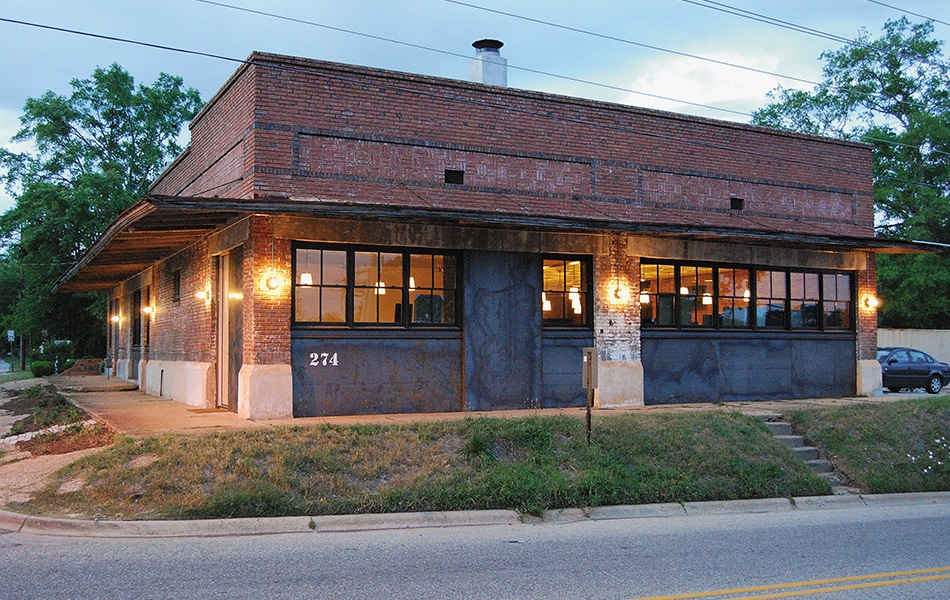 The Hills researched the building’s history and invited citizens to come by and share their memories of the building. These stories changed the Hills’ plans for the space: They decided to leave some of the layout untouched, awkward as it might be to work around, to preserve the history of the building. Photo by David Hill 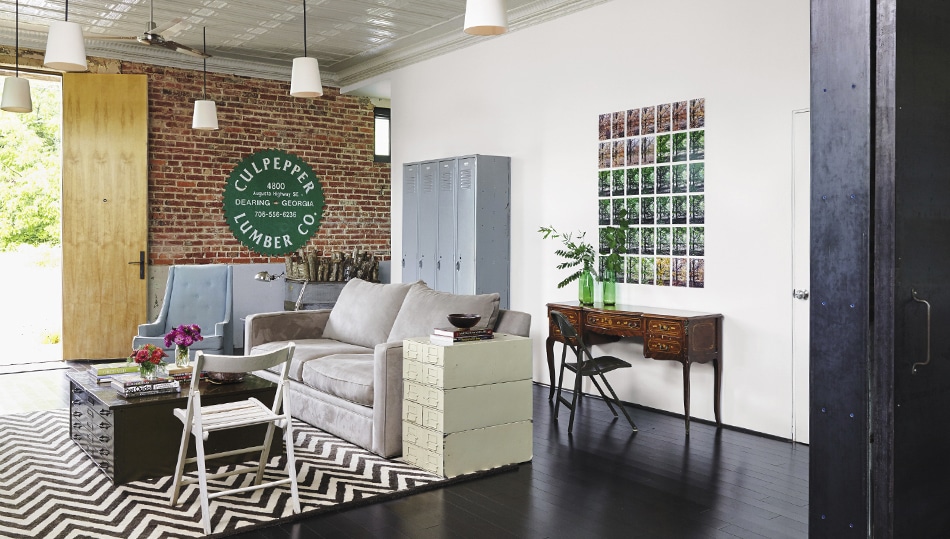 A space that used to be a corner restaurant became part of the living room. Photo by Jean Allsopp 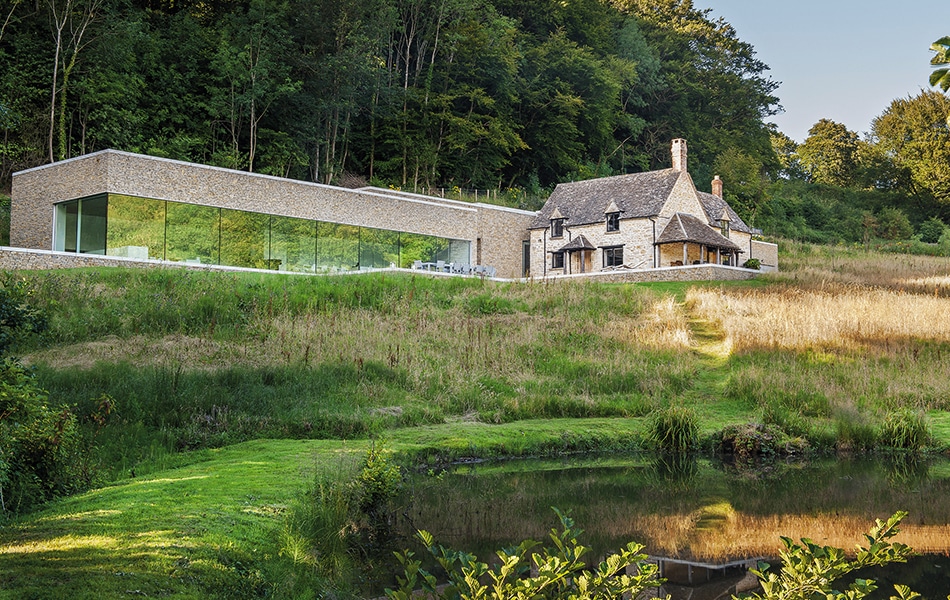 London-based architect Richard Found was barred from demolishing the early 19th-century gamekeeper’s cottage on his property in the Cotswolds, so he designed a 5,000-square-foot addition as a series of abstracted retaining walls in the same stone as the cottage. Found’s housekeeper refers to it as “the Marmite house,” she says, “because people either love it or hate it.” Photo by Andrew Merideth 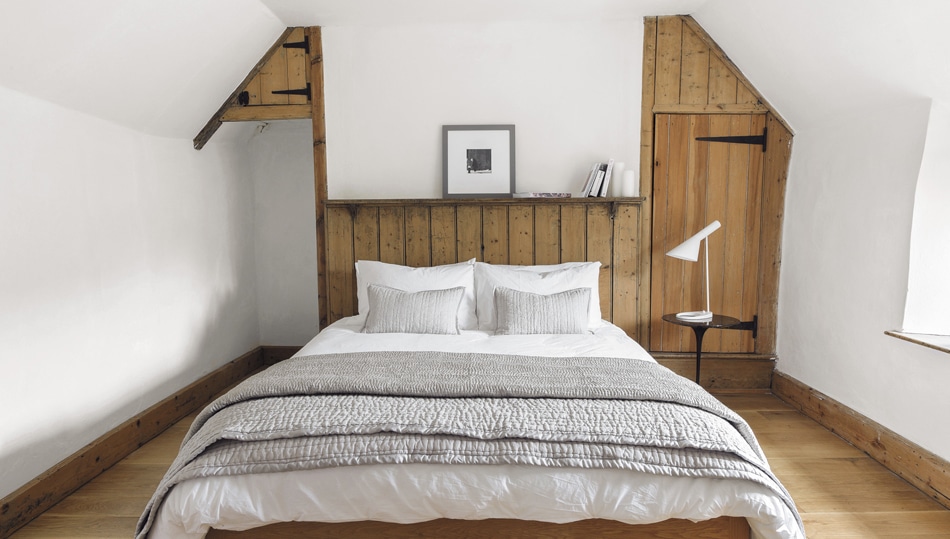 This bedroom in the cottage features old wood details. The eastern wing of the addition, which is at the high point of the property, contains another four bedrooms. Photo by Andrew Merideth 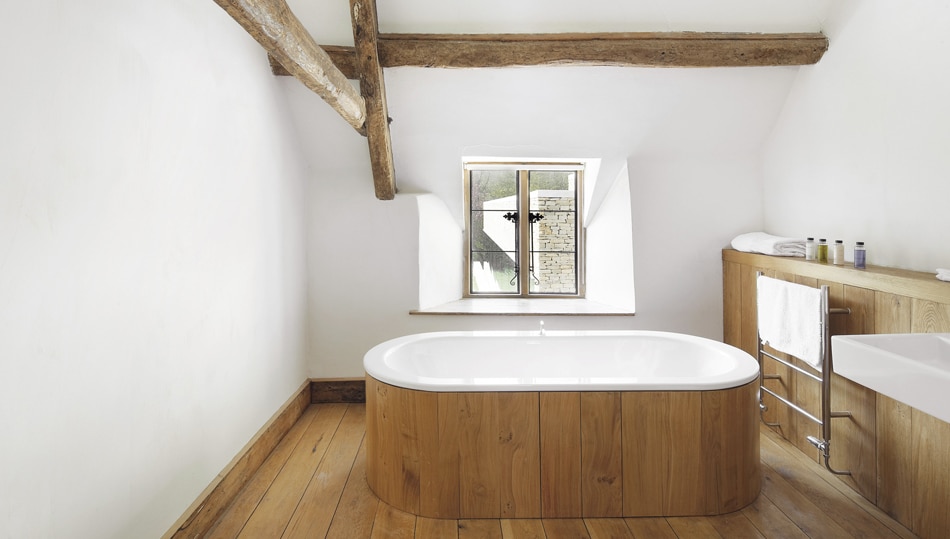 The contemporary wood-clad soaking tub contrasts with the exposed beams in this cottage bathroom, which overlooks the addition. Photo by James Merrel 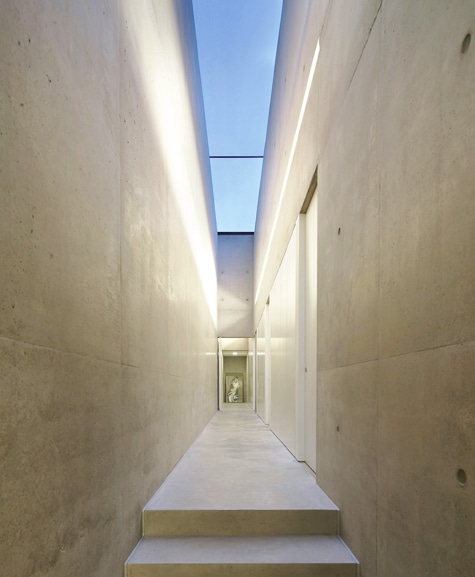 The Cotswolds house features long skylights that brighten the back of the addition, which is set into a hillside. Photo by Huffton & Crow

Indeed, even being stuck with something unwanted can produce sublimely successful outcomes. Architect Richard Found discovered this after purchasing an expanse of land in England’s Cotswolds district, which included a decrepit gamekeeper’s cottage he planned to demolish. When the local planning council got wind of Found’s intentions, they “spot listed” (that is, landmarked) the cottage and decreed that anything he added be subordinate to the original. Found’s solution to this setback was exceptionally adroit: He replaced the old stone terrace walls behind the cottage with a modernist volume built from the same local stone. It’s not what the architect would have done if he’d had a choice. Yet he admits that it is precisely the relationship between the old and new elements that gives his design its vitality.

I began work on The New Old House several years ago not realizing that its release would prove unexpectedly timely: As these three projects suggest, there is a special beauty in diversity. And to embrace and cooperate with something that might at first seem alien can be unexpectedly enriching.

Isamu Noguchi, the great Japanese-American artist and designer, wrote from an internment camp in 1942 that “to be hybrid anticipates the future.” These words are, I believe, as applicable to architecture as to cultural pluralism. It is my hope that The New Old House will inspire people to consider their own collaborations with history — to look back and, in so doing, to go forward.

Purchase This Book (or support your local bookstore) 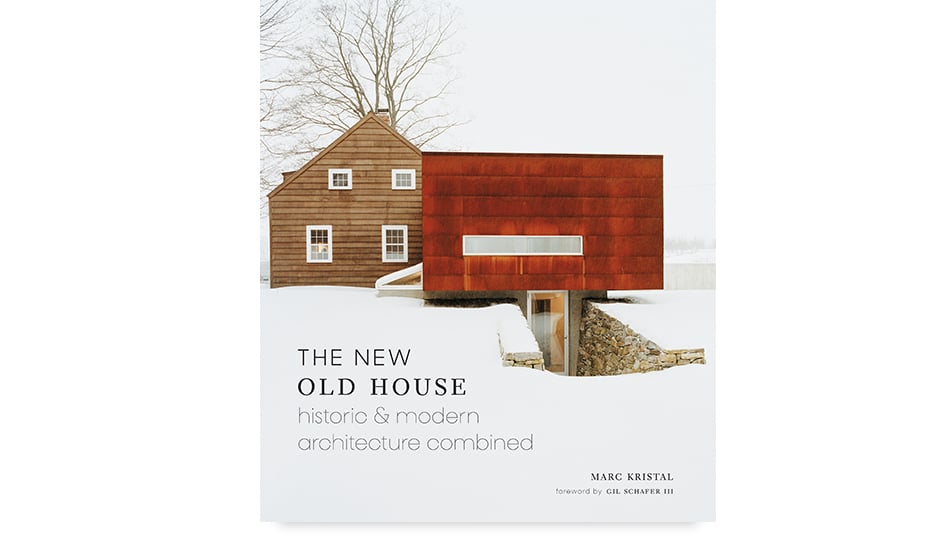