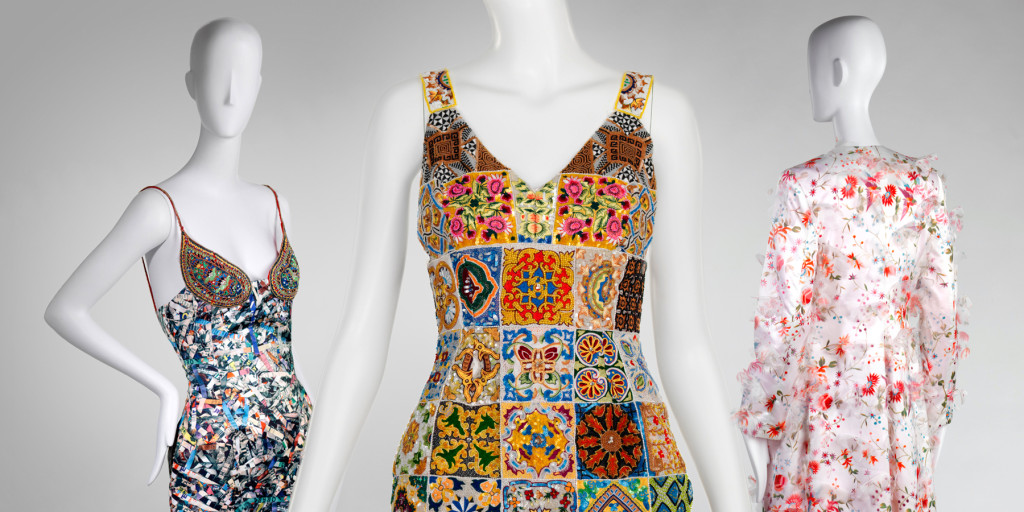 The designer and DIY entrepreneur’s first major fashion retrospective, at the RISD Museum, in Providence, showcases his era-defining creations in an appropriately spangle-covered setting. 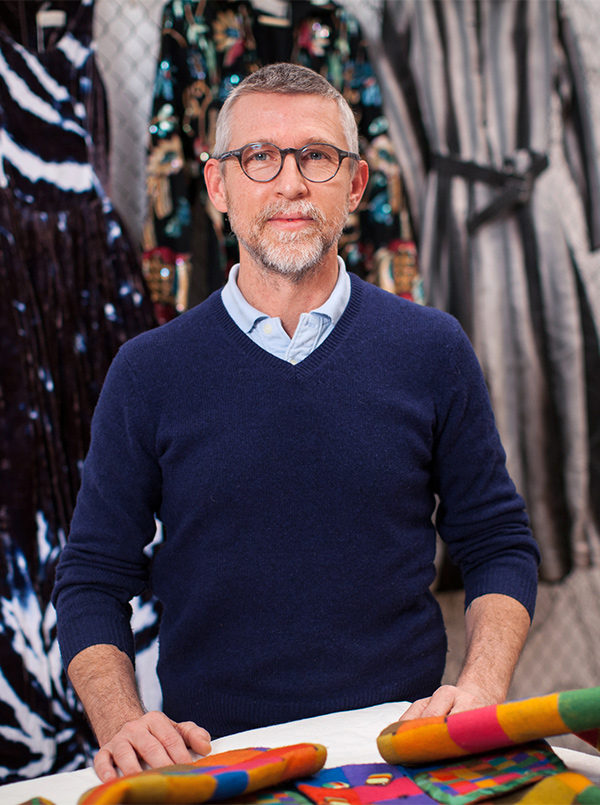 April 11, 2016Todd Oldham‘s playful, colorful and glittering fashion pieces from the 1990s are now the subject of “All of Everything,” a first-of-its-kind exhibition at the RISD Museum, in Providence. Top (left to right): Shredded Paper Dress, Spring 1998; Persian Tile Dress, Spring 1996; Fluttering Flower Ensemble, Spring 1997. All runway photos by Dan Lecca, courtesy of the Todd Oldham Studio; all other photos courtesy of the RISD Museum, Providence, RI

When Todd Oldham discusses his fashion career in the 1990s, it quickly becomes clear why he left that world to focus on other creative pursuits: He’s far more interested in craftsmanship and experimentation than runway shows and sales figures. Explaining his thinking behind a pair of black suede boots from 1997 that are crazily sumptuous, with four layers of multicolored beaded fringe, he laughs and says, “I just wanted to see how much ornate stuff I could get on a boot.”

Those boots, along with more than 65 fashion pieces made between 1989 and 1999, are now on display (through September 11) at the Rhode Island School of Design’s RISD Museum, in Providence. Titled “All of Everything,” it’s the first major exhibition to focus on Oldham’s fashion. Oldham, 54, donated the clothes and styled the outfits himself, mixing pieces from different years to compose fresh and unexpected ensembles.

The designer’s sense of adventure undoubtedly stems from his peripatetic childhood. He grew up mostly in Texas, where he wore handmade clothes, thanks to a grandmother who had taught him sewing, and once dyed his hair pink. When Oldham was a teenager, his father, a computer programmer, moved the family to Tehran for four years, and they spent long vacations traveling to other far-flung locales.

After finishing high school back in Texas, he was fired from his first job doing alterations at Polo Ralph Lauren. “He had green hair at that point and roller-skated to work,” recalls Tony Longoria, his partner in business and life. “It wasn’t a good look for that particular brand, then or now.” Restless and unemployed, Oldham borrowed $100 from his parents to buy a bunch of white cotton jersey, which he dyed and made into his own modest fashion collection. He sold it to Neiman Marcus. A few years later, in 1989, he made his New York fashion debut, to critical acclaim. 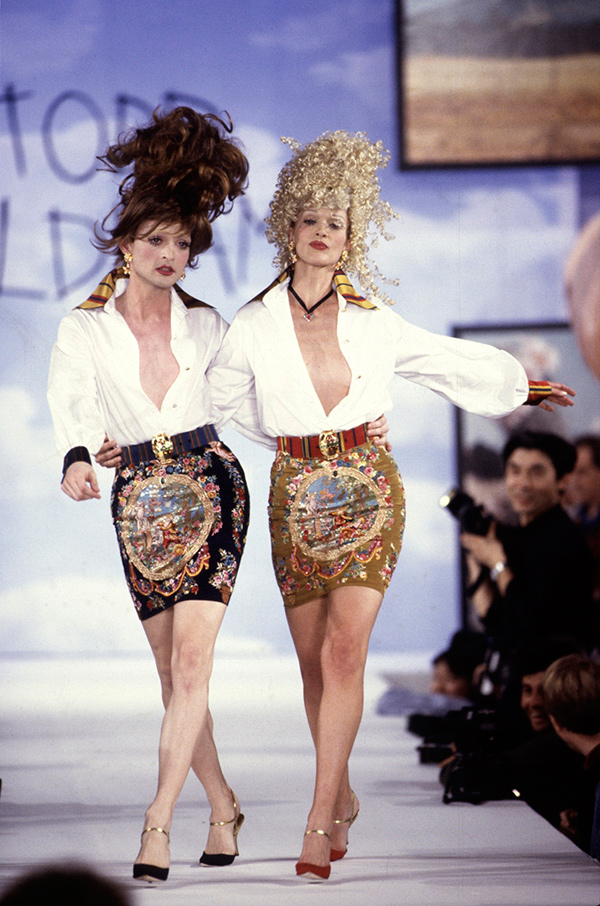 Billy Beyond and Dianne deWitt strut down the runway in Oldham’s Fall 1993 show.

At the time, Oldham was one of a handful of young designers — including Anna Sui and Isaac Mizrahi — bringing wild and colorful ensembles to New York runways in an era otherwise dominated by Calvin Klein minimalism and Ralph Lauren conservatism. (He was also charming and boyishly handsome, which helped make him a media darling.) His elaborate designs were utterly irreverent, and he often found inspiration in kitschy thrift-store finds, such as a 1940s clip-art book or paint-by-number kits.

“My ideas about never being fashionable worked out really well,” he notes. That anti-fashion aesthetic also explains why the pieces in the museum look as if they could have come down the runway this year, when spring collections were full of over-the-top ornamentation, a “more is more” approach that Oldham perfected.

In the ’90s, the fashion industry was much smaller and less corporate than it is today, and Oldham’s designs reflect the post-punk exuberance of that period. His runway shows were raucous parties, and his models sometimes skipped down the runways. He loved to pair high with low, like a multi-patterned, beaded and embroidered silk skirt with a casual top.

“At the time, evening wear was laborious, uptight and constricting, like you were meant to stand in a corner,” Oldham says. “It didn’t seem fair to me. I hate formal clothes, and I don’t want to wear anything tight, ever. I thought, ‘Why not make evening clothes that can be worn sitting down on the floor while having a picnic?’ The industry warmed to that idea nicely, and now we don’t have any issues with opulent things being worn every day.”

“My ideas about never being fashionable worked out really well.” 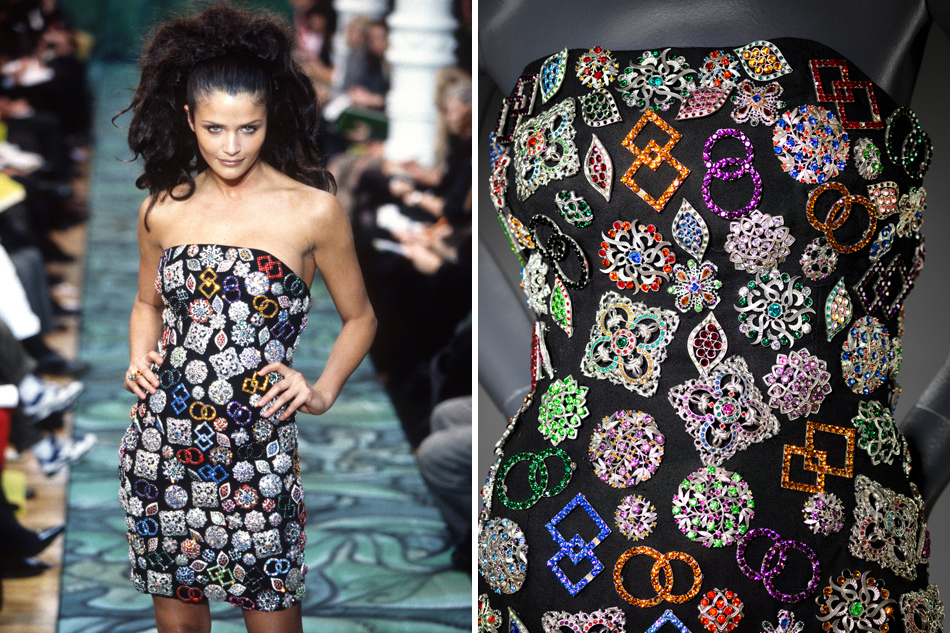 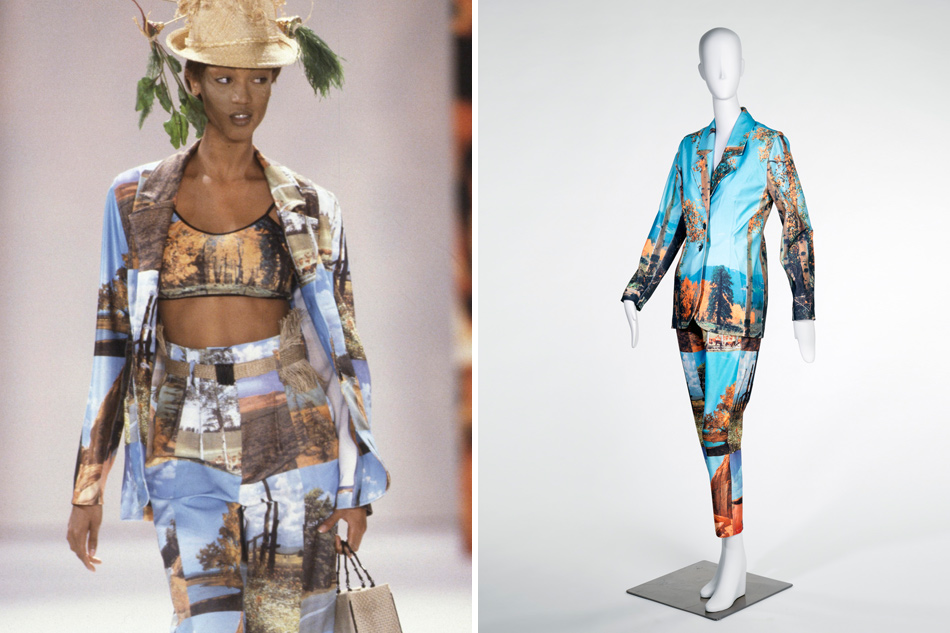 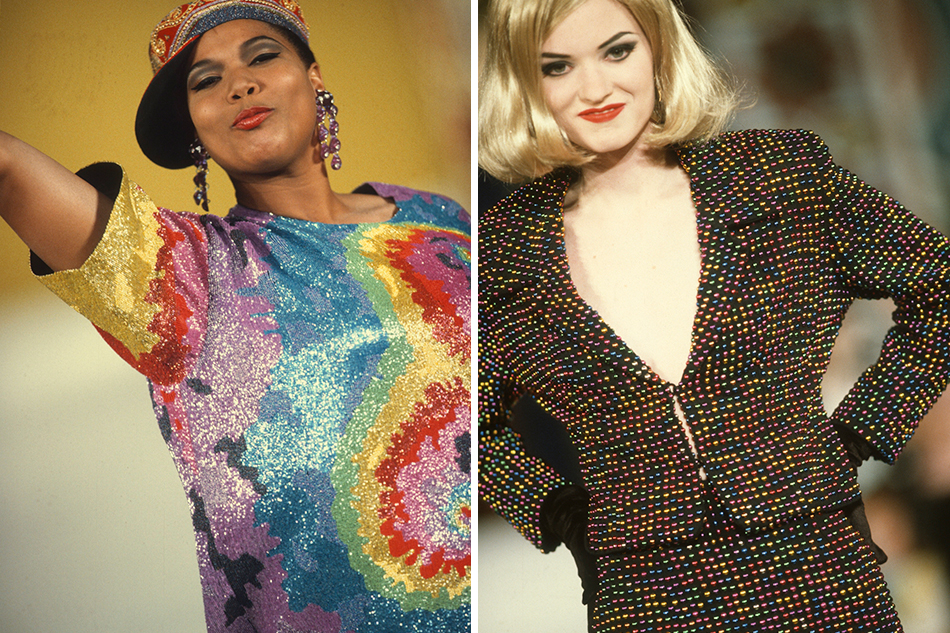 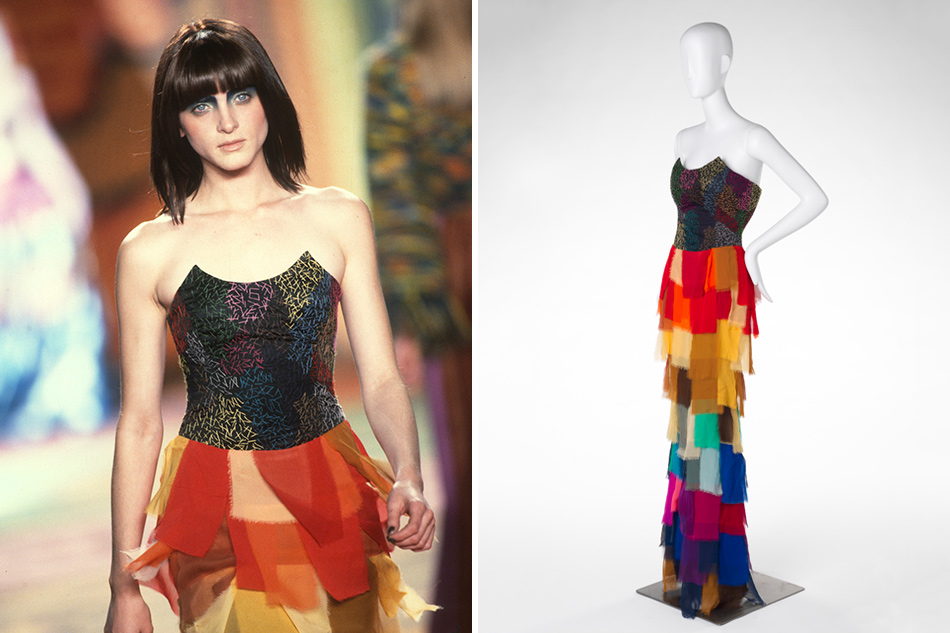 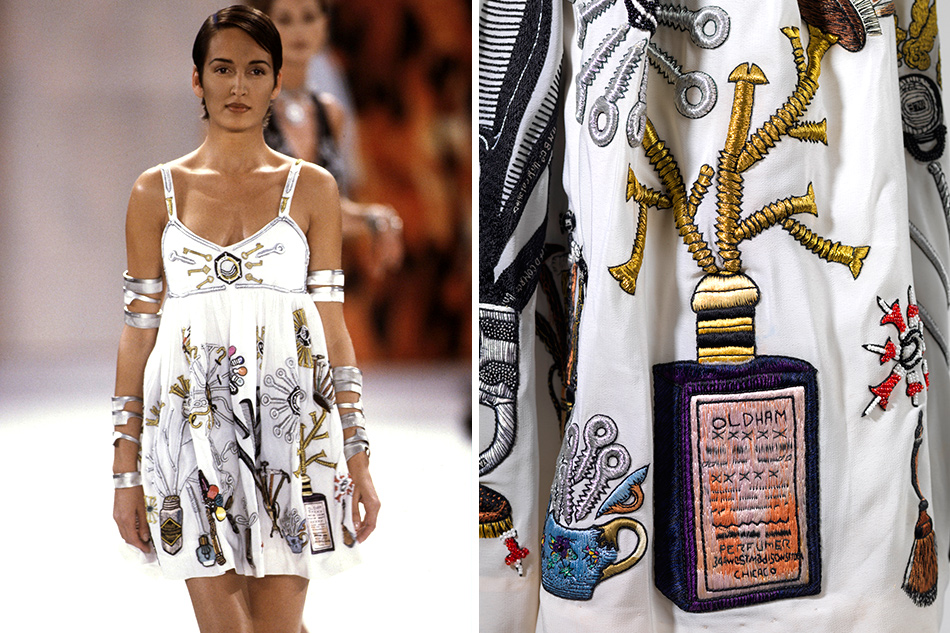 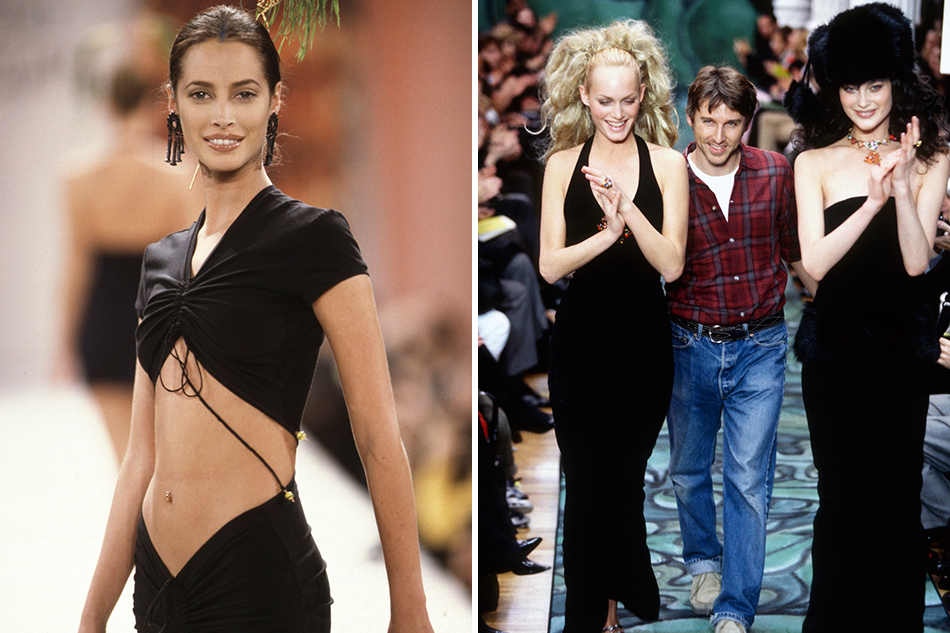 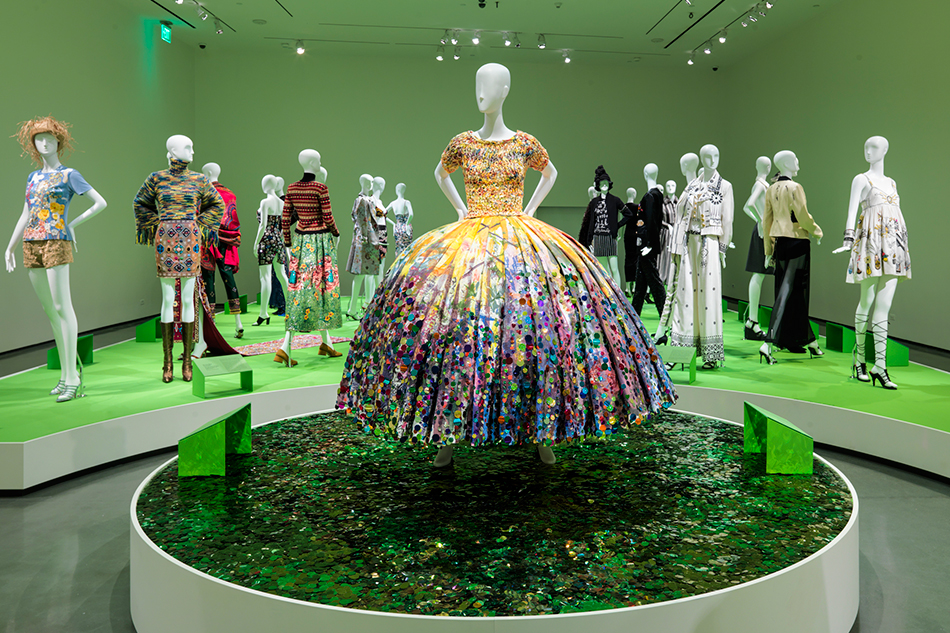 Oldham made the RISD Ensemble (center) in collaboration with students from RISD’s textiles department. “More than thirty-five students participated in creating the print on twenty-five yards of truly beautiful, insanely detailed fabric that we then embroidered with custom-made sequins and paillettes in my New York studio,” he explains. 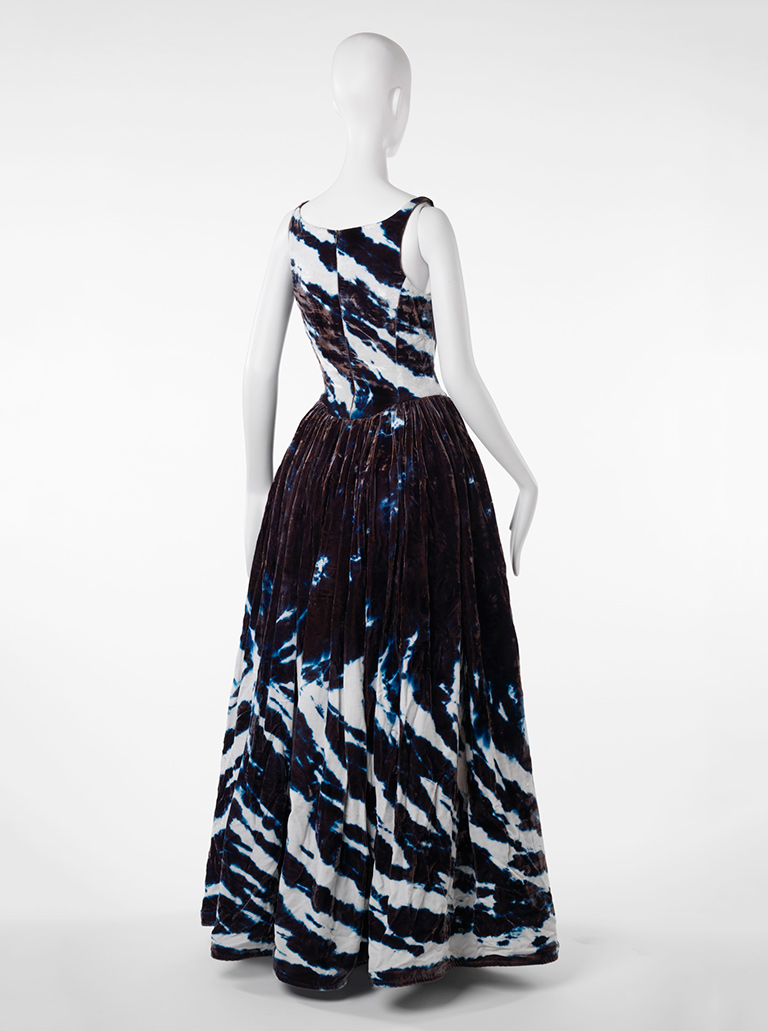 Oldham created this zebra-striped dress in the 1990s with the help of the late tie-dye artist Helen Gist-Tselikidis.

He also loved messing around with preppy fashion. One of his minidresses features an argyle print on crushed velvet, hand-painted in a rainbow of colors, with pom-poms dangling from the straps. “There’s something interesting — a paradox — in taking something conservative and turning it on its ear,” he says. “That’s a classic argyle but not in classic colors or fabric. And the pom-poms bounce all around when you move.”

But  what Oldham liked best about that time was the artists he worked with. Mystic Beading, a New York–based company with a factory in Mumbai, did his meticulous beaded embroidery. The business specialized in traditional wedding saris and let Oldham dive into its trove of old trimmings. “I got to use beads that were two centuries old and gold bullion that was three centuries old,” Oldham recalls. “It was the most beautiful, rare circumstance to get to use these ancient materials to do new things.”

Another collaboration resulted when Oldham jumped out of a cab on Houston Street after spotting “these exquisite tie-dyed T-shirts pinned to chainlink fence,” he says. He began chatting with Helen Gist-Tselikidis, the hippie artist behind them. “Her fabric always needed to air out for a few days, because it smelled like weed,” Oldham remembers.

The late Gist-Tselikidis became his collaborator for such experimental processes as splattering dye, crush-printing and painting fabrics. For a blue and white zebra-striped dress, she folded and bunched white fabric, then delicately painted the exposed ridges. “The light parts are pristine white, and other parts are a deep inky blue. It’s a technical marvel,” Oldham says. Of Gist-Tselikidis, he adds, “I miss her. She was always up for an adventure.” 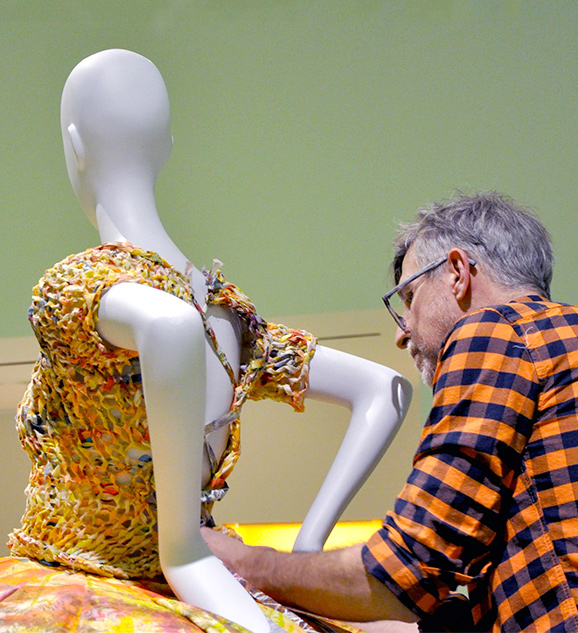 Oldham himself installed the knit top and hoop skirt that comprise the RISD Ensemble, which was his first intricate fashion project in years.

Two decades later, Oldham is still up for adventures. He had big, specific ideas about how he wanted the RISD show to look. The mannequins are displayed on platforms covered with green paillettes, or spangles, more than 400,000 of which had to be shipped to Providence. With light bouncing off the paillettes as well as the clothing’s shiny embellishments, “there’s a sort of aurora borealis of light cascades that fly around the room,” he says. “There’s a green hum in the air, and it almost feels like science fiction.”

Oldham isn’t wistful about his fashion career, because he’s always had other projects. He hosted the DIY segment “Todd Time” on MTV’s House of Style and has designed interiors and furniture. So when he became disillusioned with fashion (a single dress “involved so many countries, so much time and expense,” he lamented in the New York Times last year), he simply shifted his attention elsewhere and assumed creative roles for the likes of La-Z-Boy, Old Navy and Target. He has also authored several books and is a prolific photographer. Recently, he created two lines of craft kits — Kid Made Modern and Hand Made Modern (for adults) — to spread his love of DIY culture. Next year, he plans to start shooting his first feature film, whose subject he is keeping a secret for now.

“I had a really good life in fashion, and I was fortunate to have the freedom to stop when it was no longer in my heart,” he says. “Looking back, the pieces are made more beautifully than I remembered. When you’re making things, you tend to focus on what’s wrong, because you have to fix it. I probably should have relaxed a little more.” 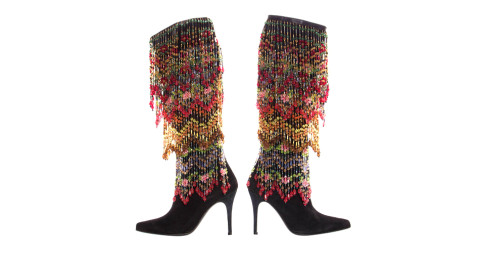 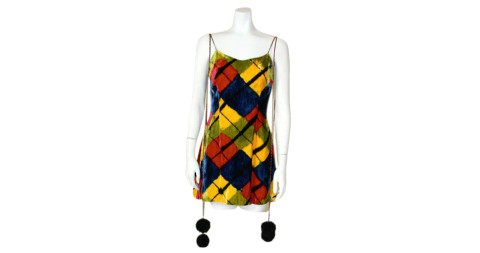 “There’s something interesting — a paradox — in taking something conservative and turning it on its ear. That’s a classic argyle but not in classic colors or fabric. And the pom-poms bounce all around when you move.” 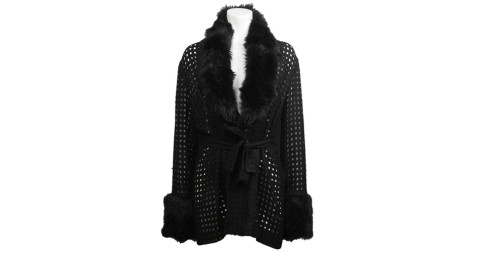 “This robe was made with wool melton. We had punched out squares from the fabric, which made it drapey. I loved the idea of ornamentation and manipulation. You can get there by adding, or by taking away.” 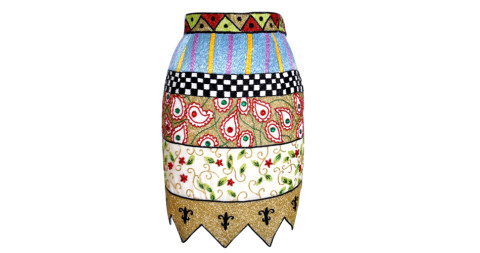 “We showed this skirt with a relatively inexpensive top that was meant to be worn during the day. At the time, evening wear was laborious, uptight and constricting, like you were meant to stand in a corner. It didn’t seem fair to me. I thought, ‘Why can’t we make evening clothes that can be worn to sit on the floor while having a picnic?’ “ 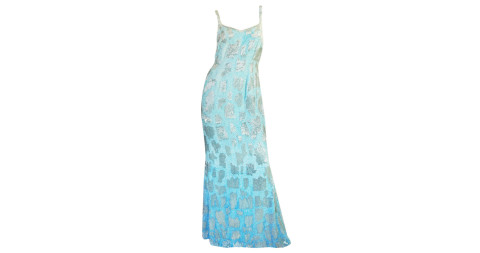 “For this gown, I had all the beading done on white silk with white cotton thread, with clear and frosted white beading. When it came back, I hand-painted it on the back, so the dye came through the fabric and tinted the beads, in a cracked-ice motif. The beads are these beautiful, soft, undulating blues that change depending on the light.”