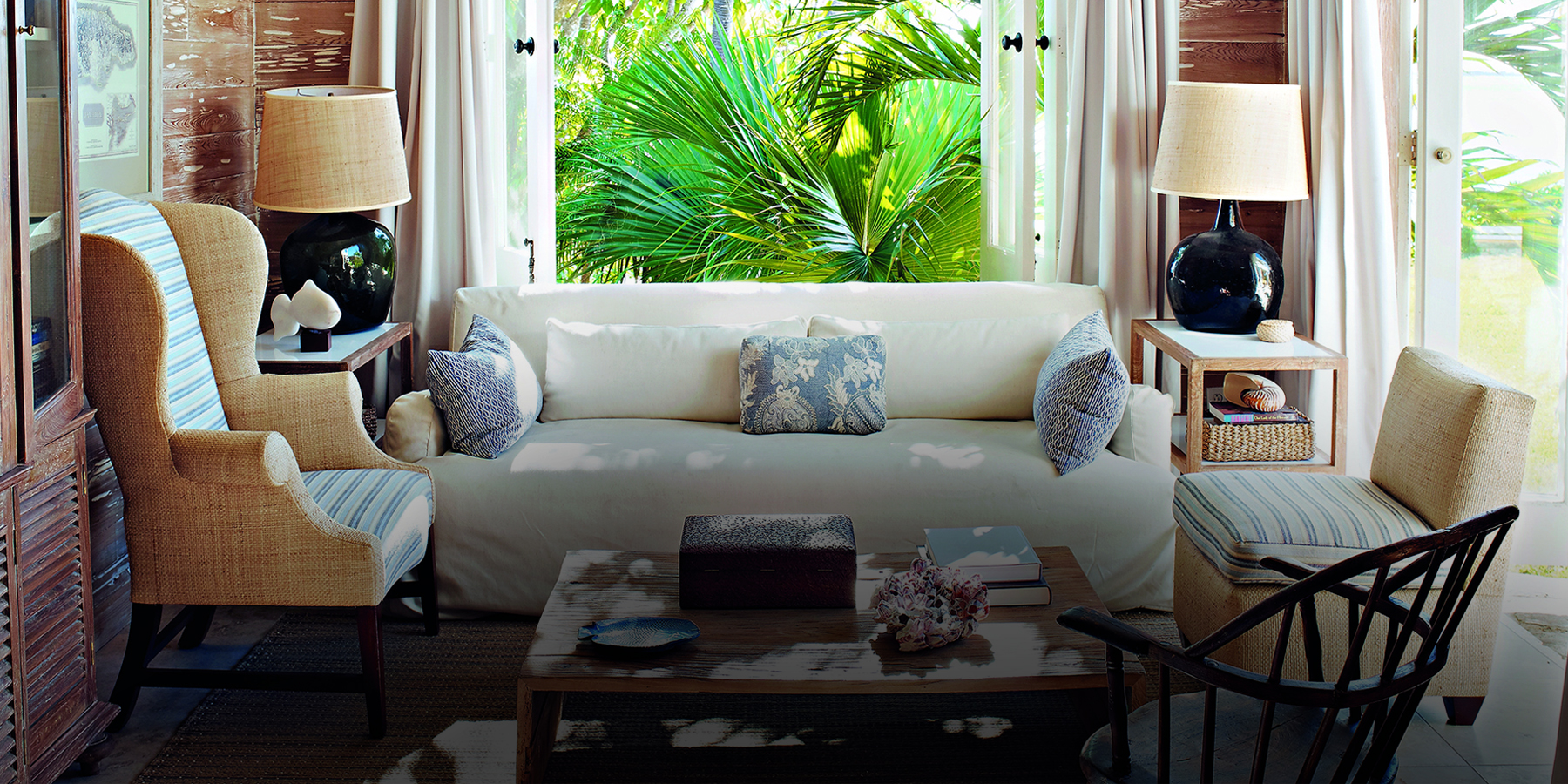 If America is a melting pot, then Tom Scheerer may be the ultimate American designer. His influences range from Billy Baldwin to Parisian street life, he merrily mixes mid-century pieces with toile fabrics, and he cultivates no-nonsense elegance wherever he works, be it Brooklyn or the Bahamas. 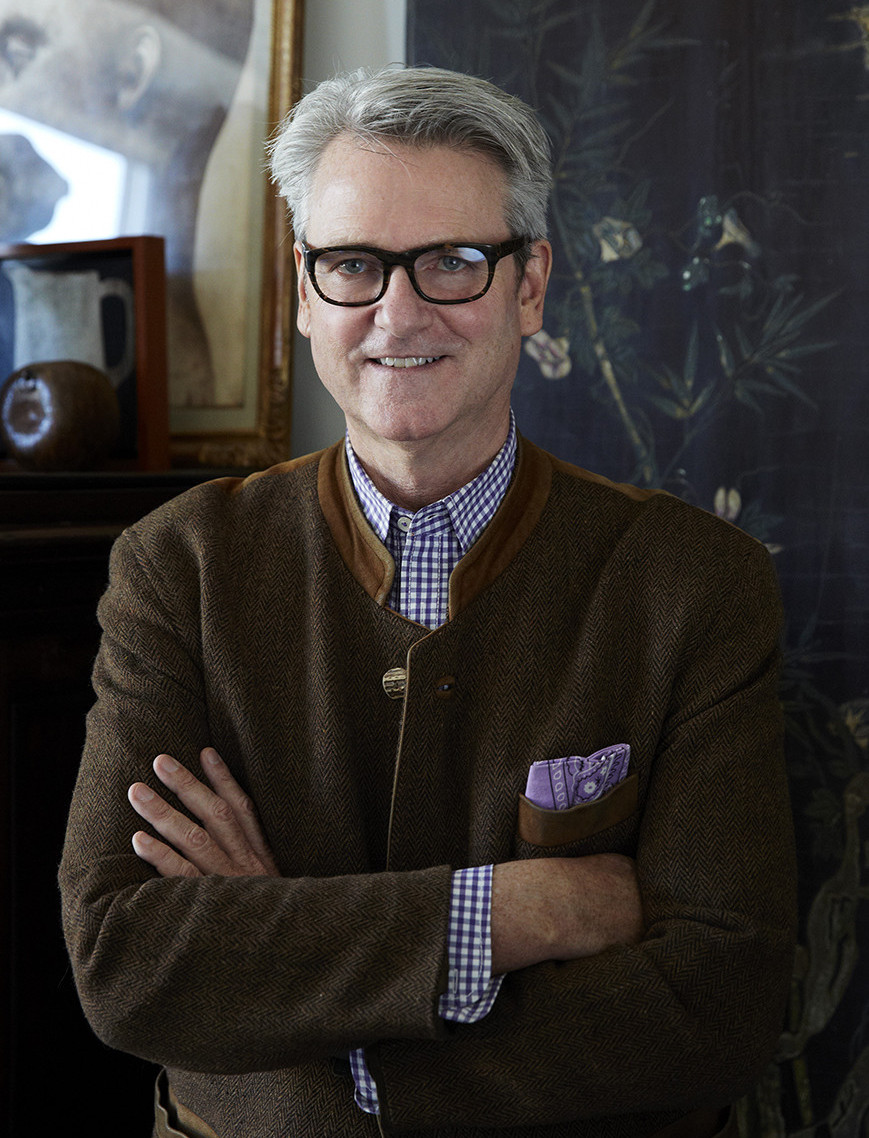 Originally trained as an architect, New York designer Tom Scheerer has been reinventing classical style ever since he opened his own office in 1995. With an enviable roster of loyal clients for whom he has created stylish city apartments and vacation houses in some of the oldest resorts in America (and beyond), Scheerer infuses his practical, quintessentially American aesthetic with cutting-edge contemporary art, iconic pieces of modernist furniture and traditional English touches. Unlike many of his peers, he is unafraid to mix toile de Jouy with Saarinen furniture, bright colors with European or English antiques.

His style is easy, sophisticated, comfortable and unique, perhaps because he is often in Paris where he keeps an apartment and, he says, is a master of doing nothing, the traditional pastime of Baudelaire’s flâneur, the gentleman who strolls city streets for inspiration and delight.

Last fall, he finally produced his first monograph, Tom Scheerer Decorates (Vendome Press), working with writer Mimi Read. Here, he discusses with 1stdibs’ Wendy Moonen his decorating influences, his favorite sources for antiques and what he considers “the best table there is.”

Why did you write the book?

I thought I’d better not be the last decorator in town without a book! In fact, I’d been decorating for Mark Magowan, the publisher of Vendome Press, and his wife, Nina, when he popped the question about my doing a book. I was flattered but perhaps a bit skeptical that the body of work warranted a monograph. Also, I realized that while I may have a certain style, I don’t have a particular thesis or a firm set of rules to decorate by. Vendome made it easy by suggesting we do a chapter per house, each with an emphasis on a different aspect of the craft. 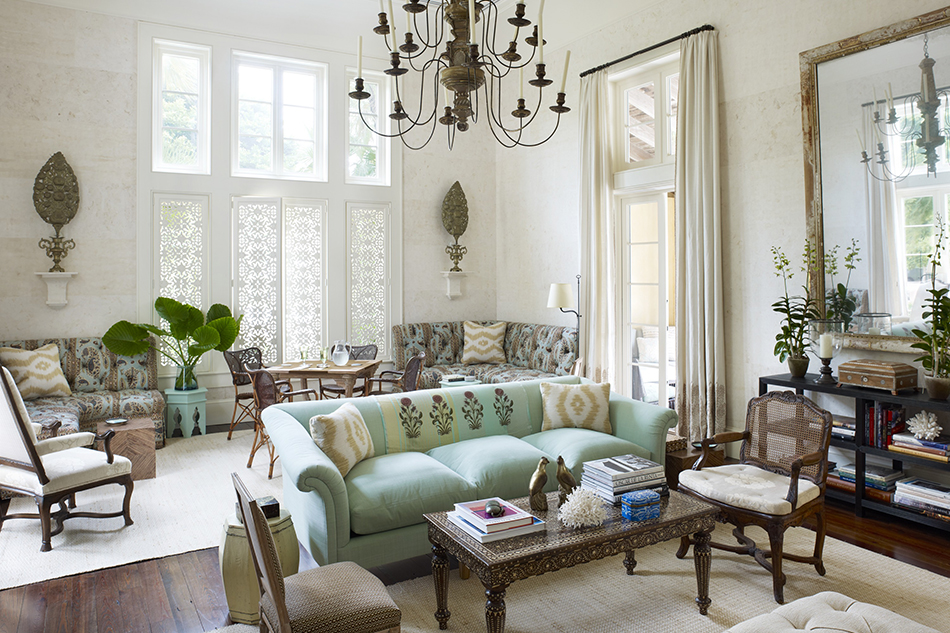 Scheerer drew inspiration from trips to Morocco, India, Cuba and Burma when creating this living room for a home in Hobe Sound, Florida. Here, antiques, both French and exotic, mingle beneath 18-foot-high ceilings. 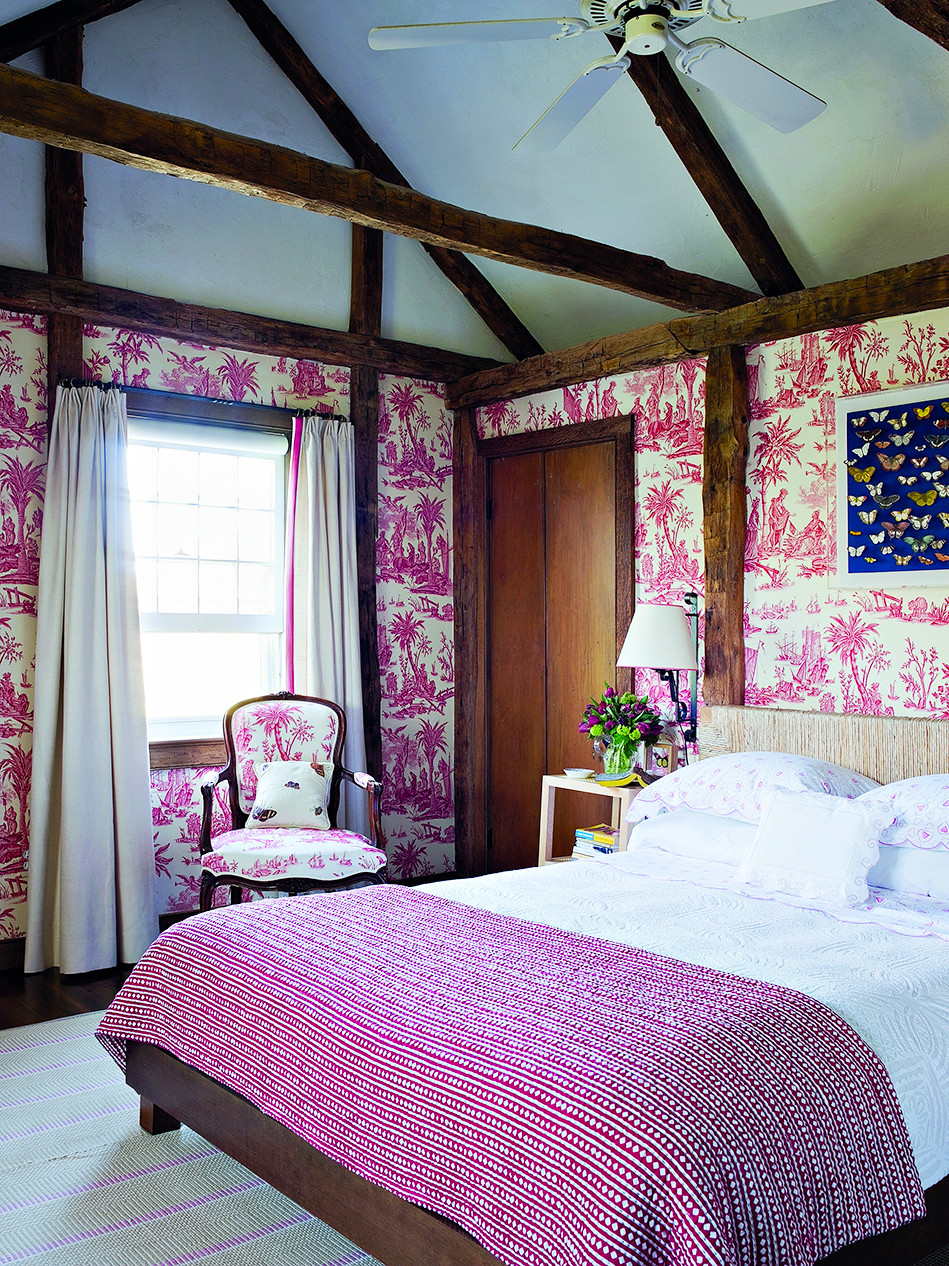 In an 18th-century farmhouse in East Hampton, New York, Scheerer created a bedroom at once modern and traditional, covering the walls and chair in Lafayette, a toile de Jouy from Quadrille Fabrics, and installing above the rope headboard a butterfly shadow box he made by hand.

What are some essential qualities you bring to the job?

I have no ear at all for music and couldn’t learn an instrument to save my life, but I do have a built-in aptitude for color theory, scale, proportion, two-dimensional composition and the harmonics of space. Architects and decorators don’t get to first base without these skills.

You write in the book that the legendary decorators David Hicks and Billy Baldwin influenced you. How so?

I hope my work doesn’t seem imitative. Certainly I’ve used specific elements from Hicks and Baldwin: their great patterns, bold color choices, perfectly scaled and proportioned upholstery. I’ve studied their logical, humanistic and dynamic furniture plans. But the real takeaway for me has been the clarity and crisp quality of their work. I do not like or do anything that is static, muddy or overly layered in historicism. Rooms by Baldwin and Hicks are invariably sparkling and alive in their moment. Highly educated deliberation balanced with instinctual improvisation gives their rooms the dynamism that I strive for.

How do your frequent travels and the home you keep in Paris affect your style?

No flies on me. More than a week in any one place and I feel I’m stagnating. New York is all about work, and Paris quite the opposite. Aside from a trip to the Marché aux Puces and an occasional shopping foray to the Left Bank, in Paris, it’s “art de ne rien faire,” [“the art of doing nothing”]. Having a house in Europe keeps my eyes open as a style-monger, certainly, but it also keeps my core values in check. I find travel, and the culture and life throughout Europe, to be the antidote to aspects of American life I find ugly — crass materialism, insensitivity to scale and the glorification of the uneducated to name just a few. 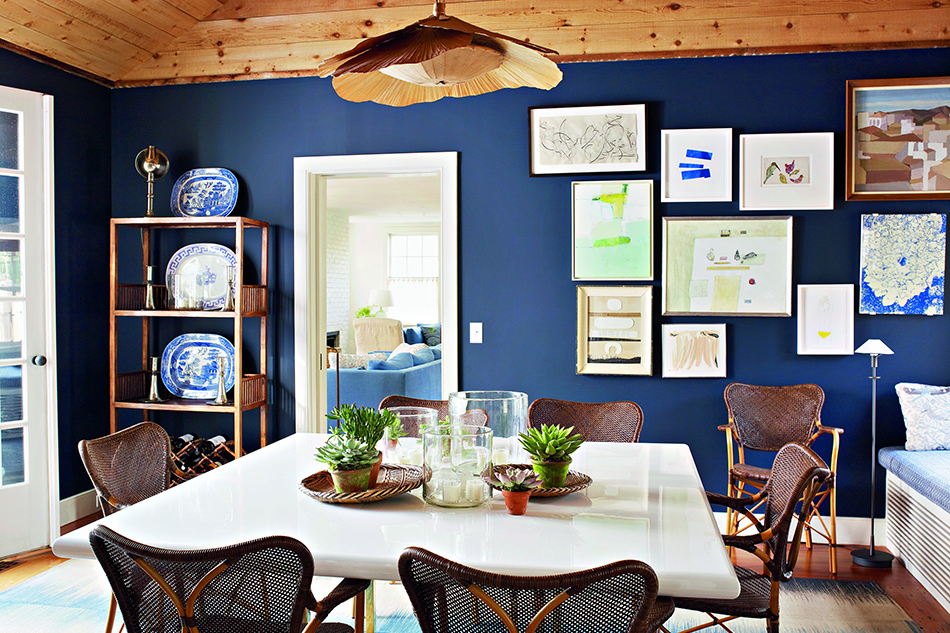 To finish the dining room of this house in Sag Harbor, New York, Scheerer found this 1970s Ingo Maurer lighting fixture made of Japanese fans on 1stdibs. “I have a special thing for vintage Maurer fixtures,” he says. 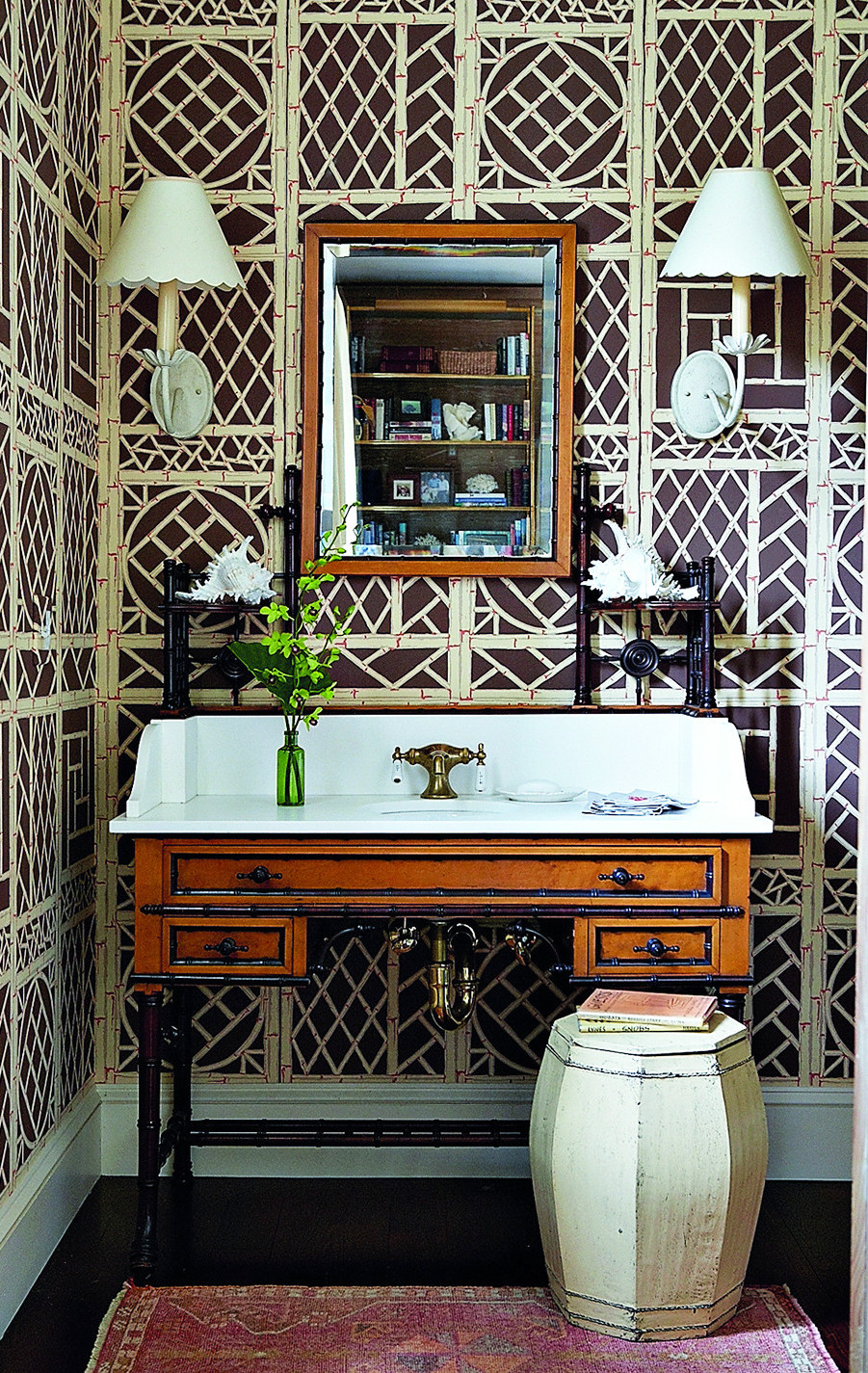 In the powder room of the Hobe Sound home, Scheerer converted a French faux-bamboo dressing table found on 1stdibs into a washstand whose fretwork is enhanced by the brown-and-cream Lyford Trellis wallpaper by Quadrille.

You attended buttoned-down private schools and grew up vacationing in old-school resorts like Harbour Island and East Hampton, yet your sensibility couldn’t be called traditional.

I’m happy and flattered that you see the modernist in me shining through what is basically a very traditional approach to decorating — it’s more organic and less rigorous than one might realize. Modernism is about creating an all-new world, but, like my “ancestors” (both family and the great decorators), I fuse what’s already there with what’s new.

My forays into modernism are generally an appreciation of simplicity, logic and practicality. For me, a Saarinen table, for instance, is simply the best table there is. It’s sturdy, comfortable, readily available, easy to clean and has no pesky legs to compete with granny’s Queen Anne chairs.

How do you characterize your decorating style?

Ah, a most difficult question! I think it’s a distinctly American way of decorating. I like to combine the best of the American past and of European culture (with an emphasis on the traditions of England, naturally), plus a bit of travel exotica and the clarity and rationality of modernism. The overarching rationale is one of comfort — and good sense. I call it “No-nonsense American decorating.” 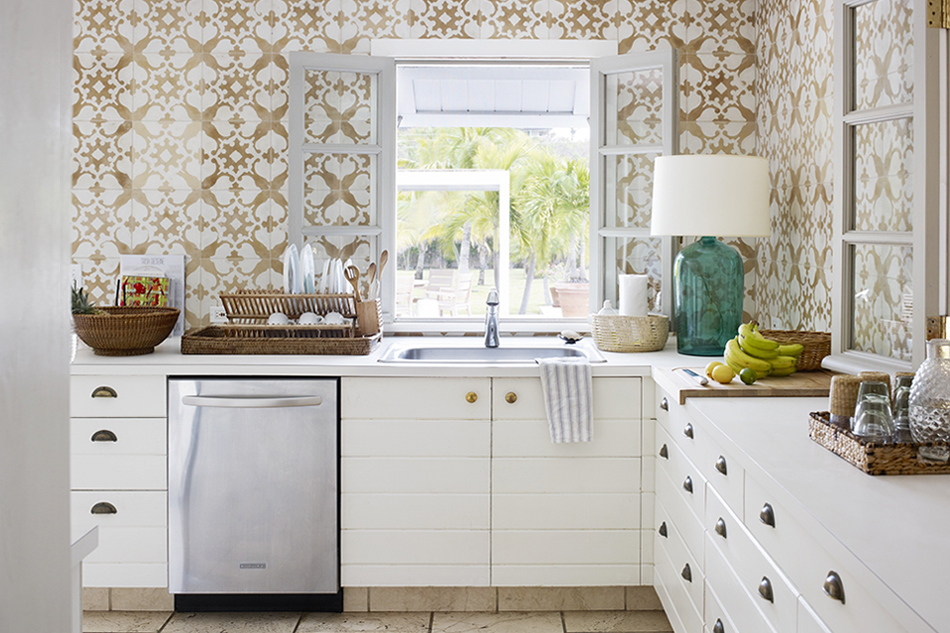 In another Harbour Island house, the designer placed custom-made, swing-in casement windows from France in the kitchen, opening it to the outdoors. The walls are covered in Cuban tiles. 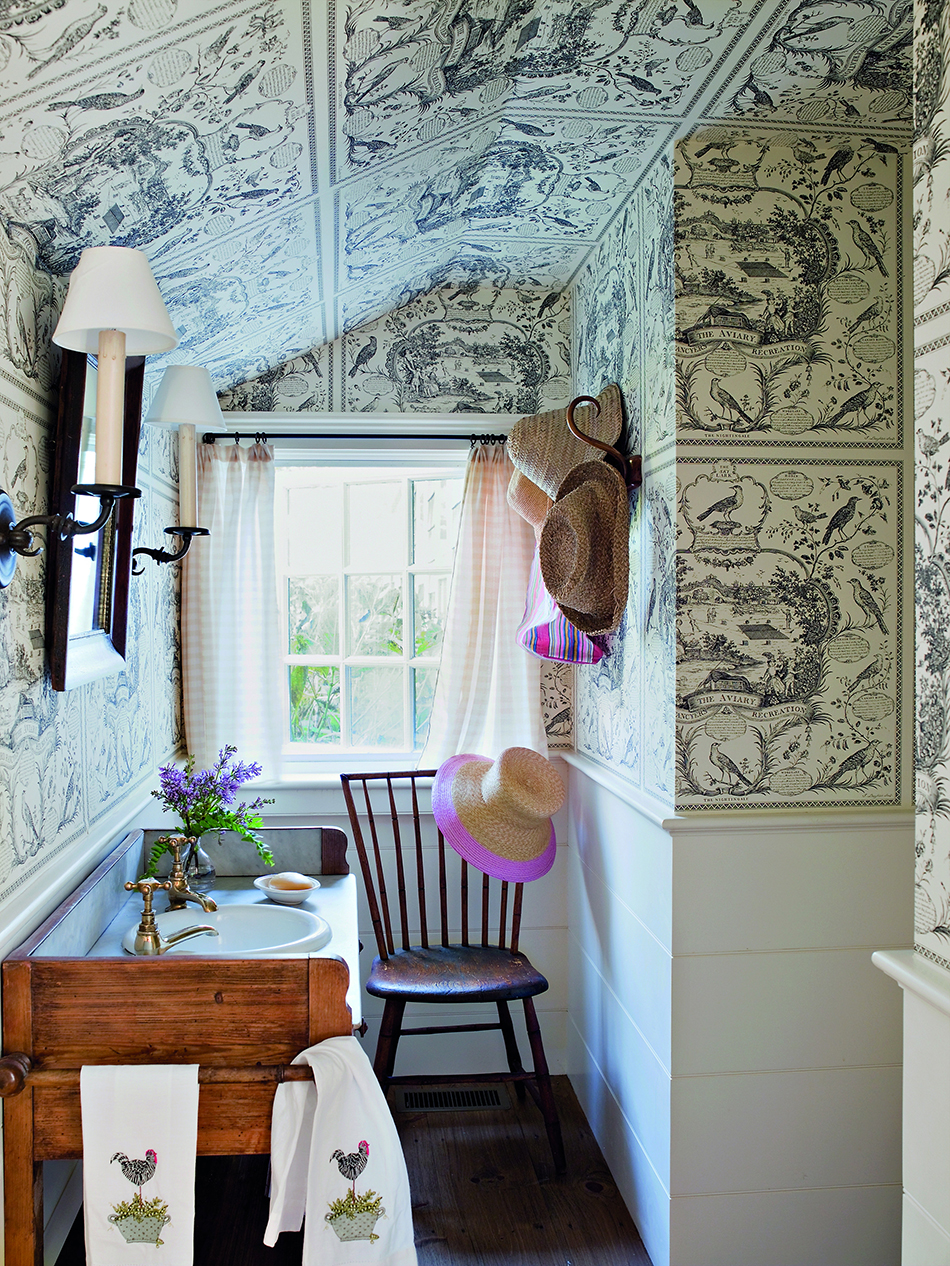 Where do you shop for vintage pieces and antiques?

I’ve always got my eyes open for an object that can pull a certain story “into focus,” as they say. I try not to shop for specific projects but rather for things that speak to me on a gut level. I think of this as “things finding me.” I’m a multitasker and spend a lot of my so-called downtime on 1stdibs. This is a process of associations. I jump around a lot: from form to historical period, from period to color, from color to locale. My regular sweeps of galleries in Stamford, Connecticut, and Hudson, New York, are always productive, and I go around Paris. I make an occasional trip to the Sablon district in Brussels, where there are 20 good shops in a few blocks. Efficiency is all!

Do you consider yourself a curator when you are putting together a room?

Curating may be a fancy but good word for decorating. I never called myself a designer so, yes, I’m a curator. My role is to read the signs of every object, pattern and arrangement of furniture and then vet them for appropriateness to the project at hand. Does it send the right message, and does it move the desired story forward? There is always a narrative underlying good decorating; a story real or imaginary about the client, say, or one about the locale and the time we live in, in relation to places and times we romanticize. My good friend and style mentor, the late Harper’s Bazaar editor D.D. Ryan, always likened the craft of decorating to the mise en scene of cinema. That’s an apt and flattering comparison.